Two months ago I published The Great Debate: Are we alone? part 1

Here is finally part 2. My apologies for the long delay.

Quite a few of you gave their opinion about the question “Are we alone or not”.
Not surprisingly most ‘votes’ went to “We are not alone”, same as in the poll at the end of the Great Debate video.

Let me explain why I have become (recently) more skeptical about life elsewhere in the universe.

In discussions about the probability of extraterrestrial life, you will often encounter the Drake equation.
In 1961 Frank Drake tried to make an educated guess about the number of intelligent civilisations in our own galaxy, the Milky Way.
He started with the (huge) number of stars in the Milky Way, then asked questions like: “how many stars will have planets”, “how many planets will be ‘habitable'”, “what is the chance that on such a planet (primitive) life will develop”, “what is the chance that intelligent life will evolve”, and several more of this kind of questions.
In his original estimate Drake comes to a number of about ten planets in our Galaxy at this moment, with intelligent, technologically advanced civilisations.

Many of the factors in the Drake equation are the result of guesswork.
For example, one of the points of discussion in the “Great Debate” is about the chance that intelligent life will evolve from primitive life. Drake’s estimate was 1 %. Marcy in the “Great Debate” thinks it might be close to zero. “Maybe we humans are just a freak evolutionary incident?”

However, both Werthimer and Marcy agree: “primitive life will be teeming in the Universe.”
Drake estimated the chance that life will develop on a habitable planet as 100%!
And Michio Kaku, an American ‘science communicator’, who always enjoys being in the limelight, goes even further: “The Laws of Probability Tell Us That the Universe Should Be Teeming With Intelligent Life Forms” Elsewhere he  writes (foolishly, IMHO) about a 100% probability!

Well, if they are right, why has until now no evidence of life been found on Mars?

A few days after my first “Are we Alone” mail, I sent you a short email about the exciting discovery of a habitable planet, orbiting Gliese 581, a red dwarf star at a distance of 20 lightyear from the sun.
Here is the picture again. Planet g is causing the excitement. The blue band is the habitable zone. 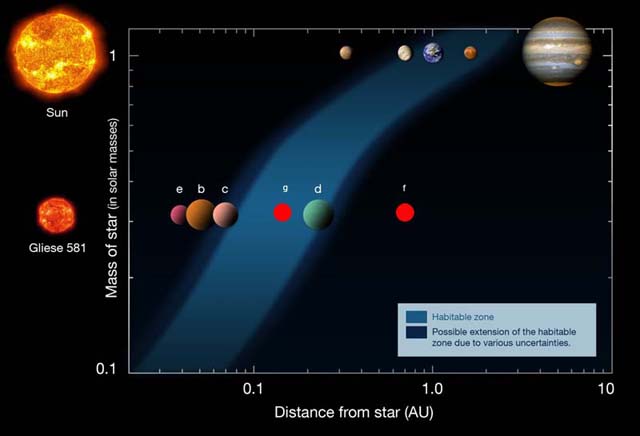 The concept of a habitable zone is based on the assumption that you need liquid water for the development of life. The (surface) temperature of a planet should not be too low or too high.  For a (cool) red star like Gliese 581, this zone lies much closer to the star, than for a hotter star like our Sun.
Of course you can think about more exotic  forms of life, based on silicon, ammonia, etc. Click here for a detailed discussion.

Now, when you look at the picture above, you will notice that both Earth and Mars are orbiting in the habitable zone of the Sun.
The Viking and Phoenix missions to the Red Planet had as one of their main targets the search for life on Mars, and I am sure that many scientists were hoping, or even convinced that evidence of life would be found. So was I.
But “nothing” has been found yet. Of course more exploration is needed and quite a few new missions have been planned.
Still it is disappointing and personally I believe now that the chance that life will develop on a habitable planet, might be small, maybe even very small.
Sure, the Miller-Urey experiments have shown that it is “easy” to synthesize amino acids, the building blocks of life, when the conditions are right.
And organic compounds have been found even in interstellar clouds.

So, this is my position:
As soon as evidence of life will be found, on Mars or deep under the frozen oceans of Jupiter’s moon Europa , I will celebrate and be convinced that life indeed is teeming in the Universe.
Until then, I believe in the Rare Earth Hypothesis , that we might well be alone.