Sudah Makan? (Have you eaten already) is a customary greeting in Malaysia, where you would say in English: How Are You?

Here are a few pictures about my Makan, last two weeks…:-)

Breakfast and Lunch with Cathy, Neil and Rani. Actually we did a lot more than eating, here is the full report: Another nice outing, 21-4-2013 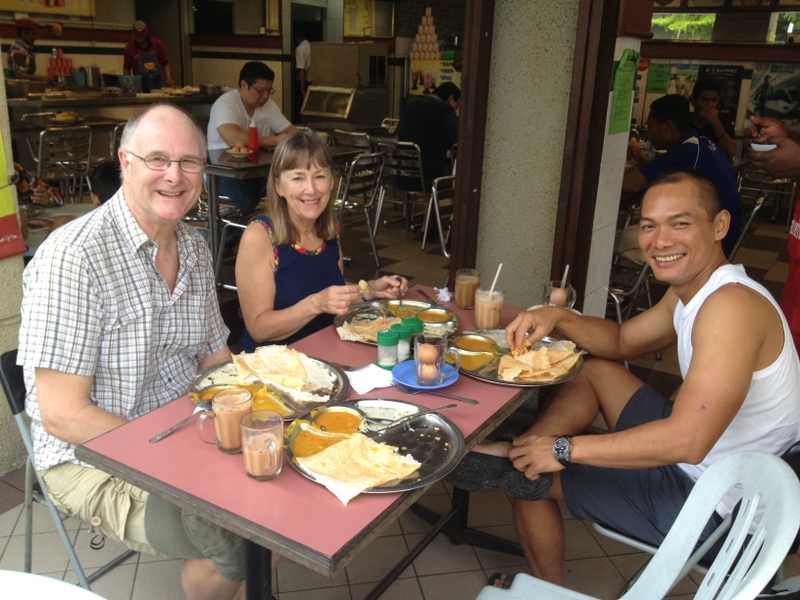 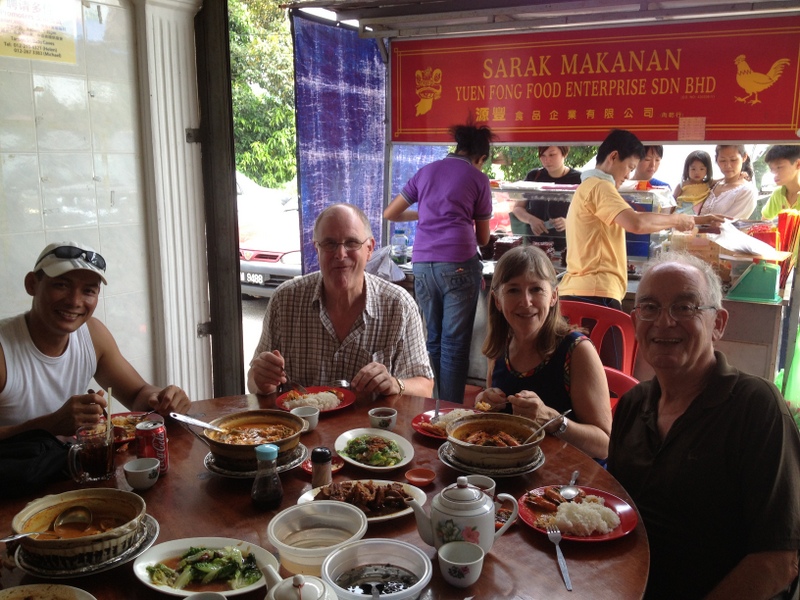 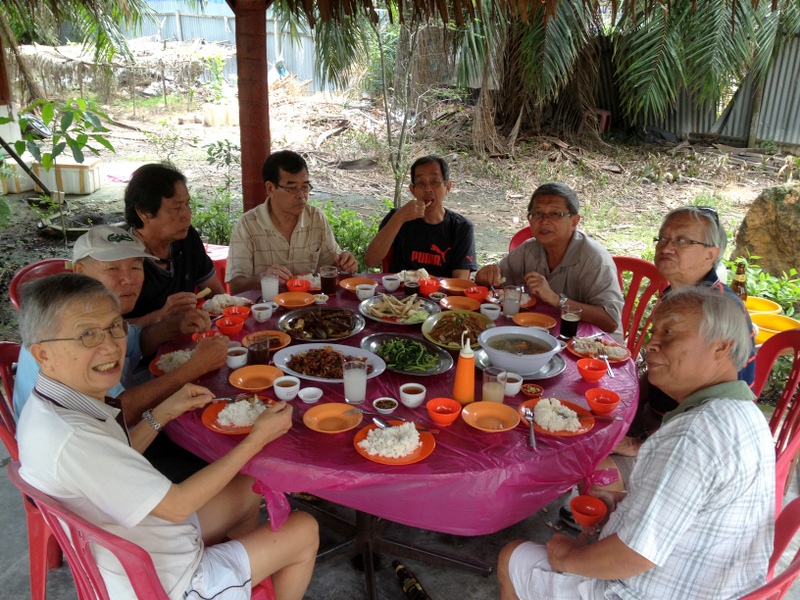 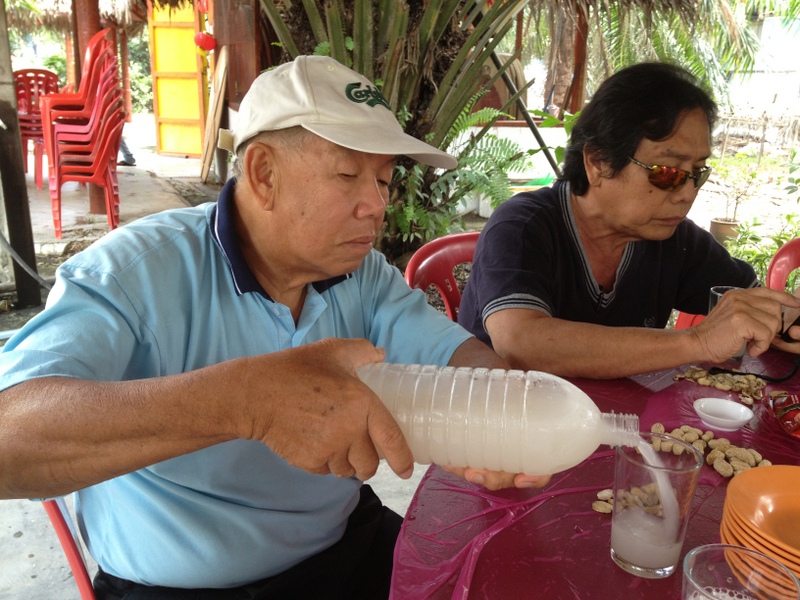 Raclette dinner with Pat and Wim, and their friends. Nice view from their condo, delicious food and pleasant company, what more is there to wish? 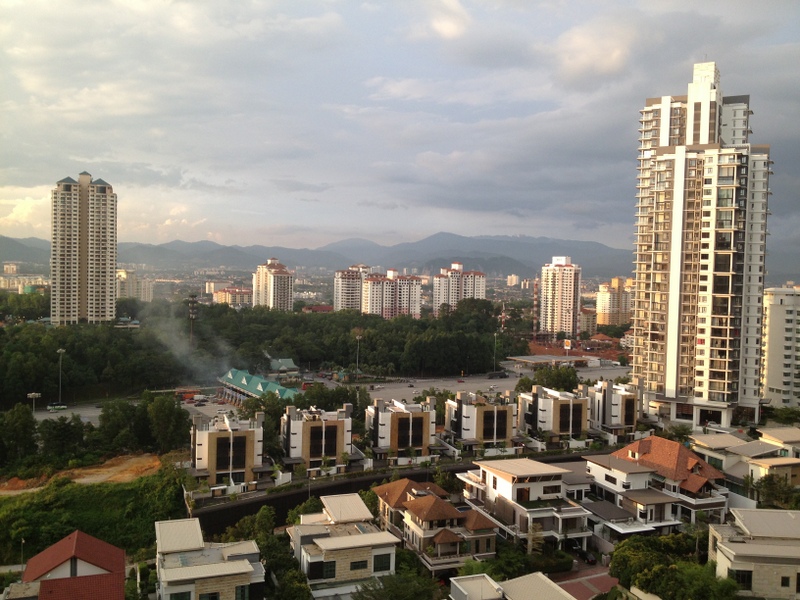 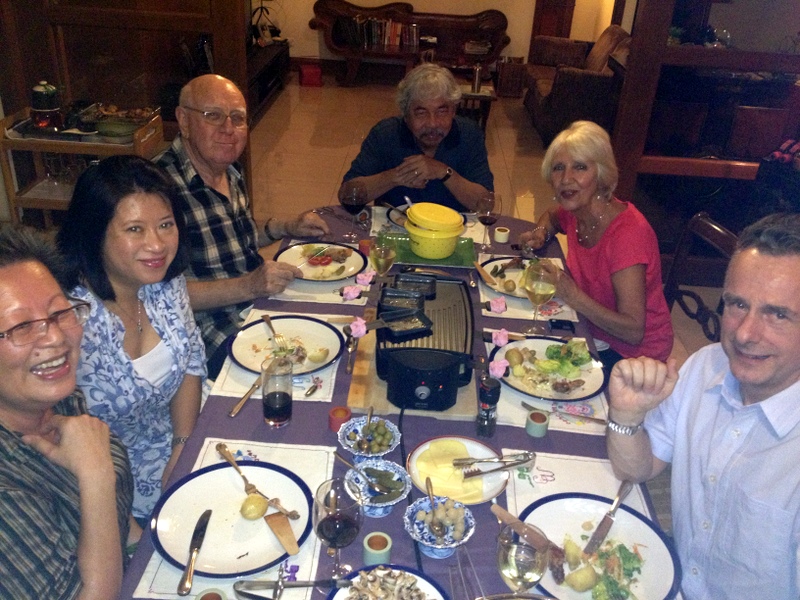 Dinner with Cathy and Neil at our place. Italian cuisine with an Asian touch. 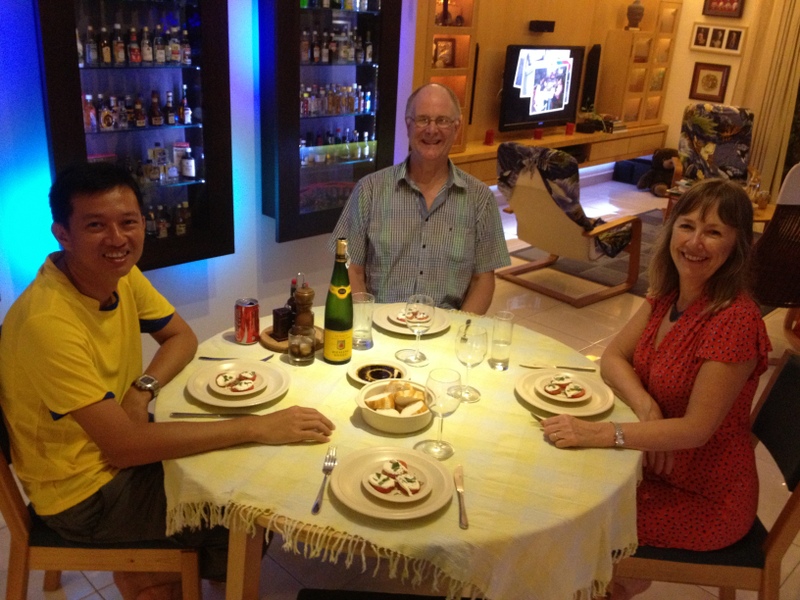 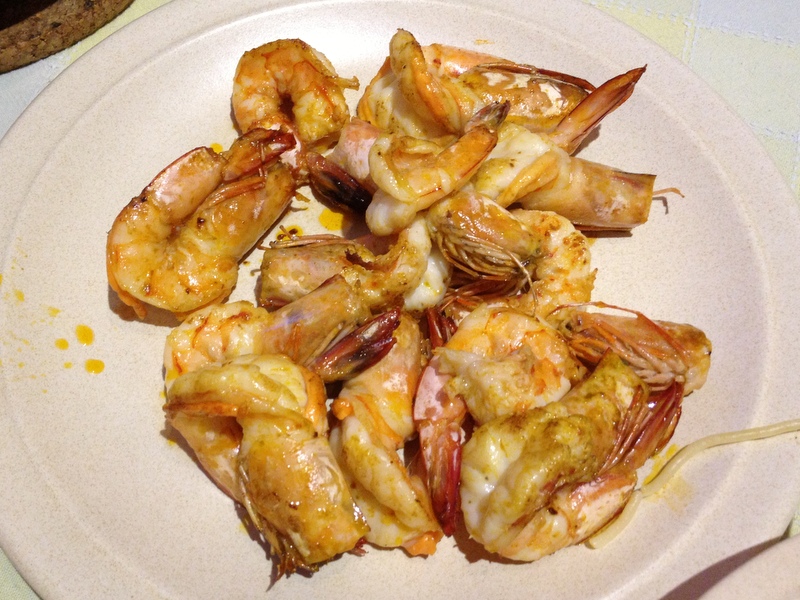 So, yes, Sudah Makan! And the good news is: slowly (0k, very slowly…) I am loosing weight!

Time for another post about Bukit Kiara. Here is a GE screenshot of this Green Lung of KL. The tar roads are in white, the maze of trails, created and maintained by TRAKS are in green. The infamous fence in red. The southern part of the hill should be gazetted already years ago as a park. FoBK (Friends of Bukit KIara) is at the moment mainly concerned with the claim of Berjaya on a part of this park. 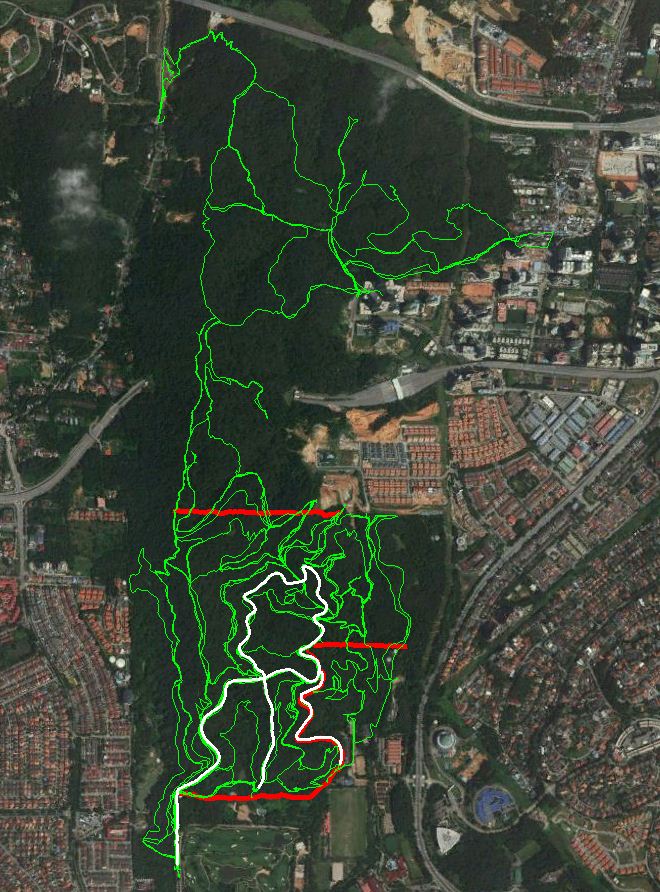 The part of Bukit Kiara north of the Penchala Tunnel is less visited and more remote. Apparently it is a so-called Malay reserve, which means that only Malay can own/develop it. Recently bikers and hikers noticed  that development in this part has started. With my walking kaki Pola Singh we have done a recce. In the GE screenshot the (northern) fence and a few of the trails have been indicated. The white road is a new road, that has been bulldozed, starting from Kiaramas. 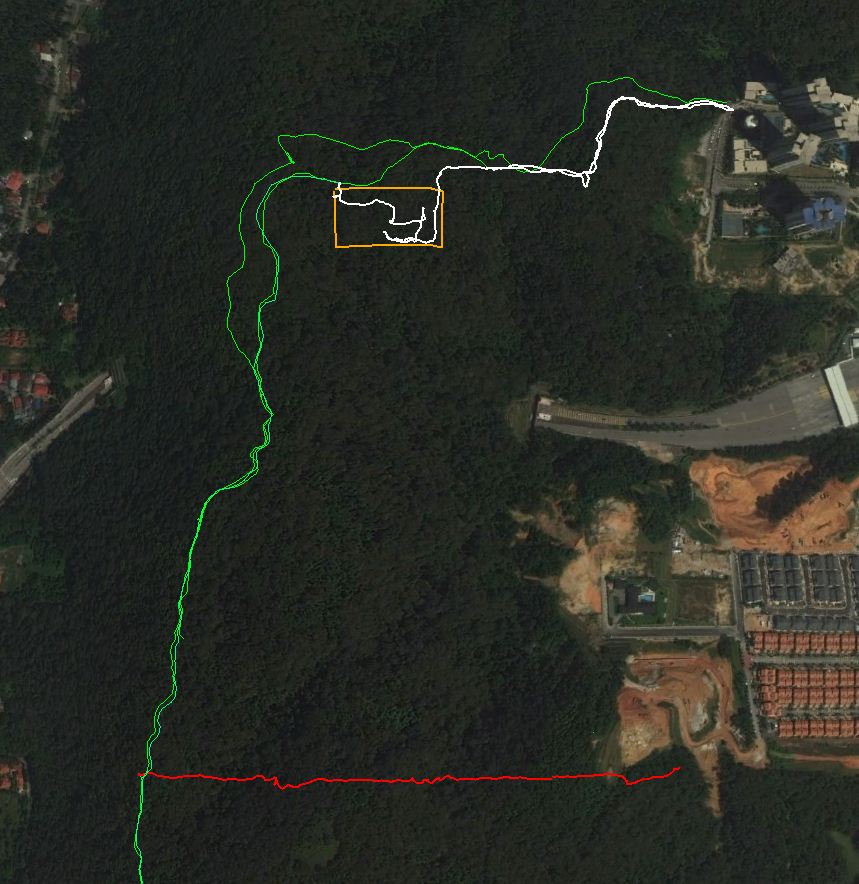 Talking with the contractor, the purpose of this road became clear. On the ridge a plot of land of 3 acres (~12.000 square meter!) will be cleared for the construction of 3 (!) bungalows. To get an idea of the size I have roughly indicated in orange what a plot of 3 acres would amount to.Later we heard from TRAKS that the plan is to clear a total of 12 acres. Unbelievable and sad. You wonder who the builders are and who has given them permission for this destruction…:-(

Here are some pictures, no need for much comment..:-(

The view will be beautiful

You can see the KL skyline 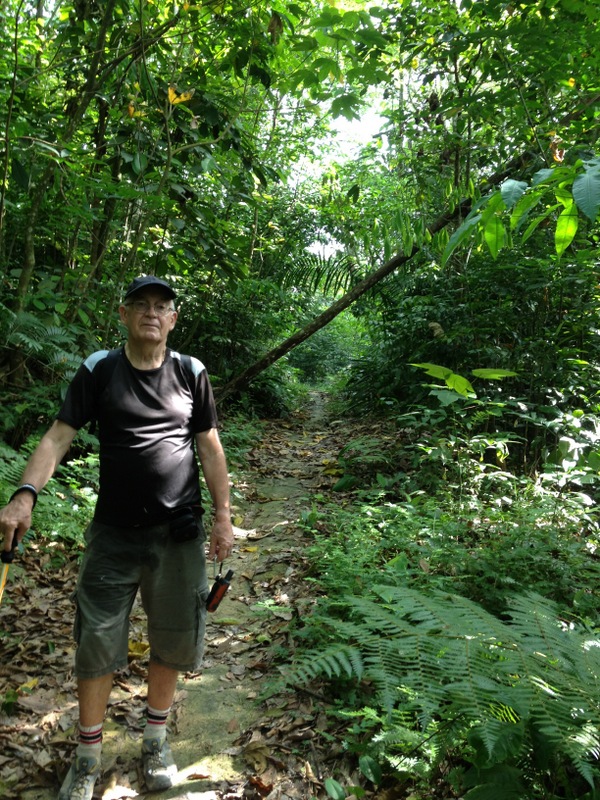 I have recorded our recce as an EveryTrail trip. 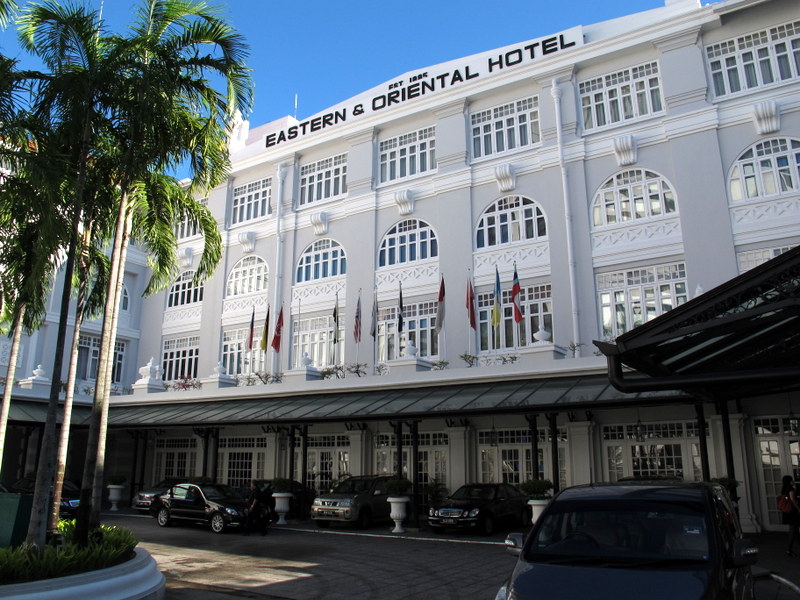 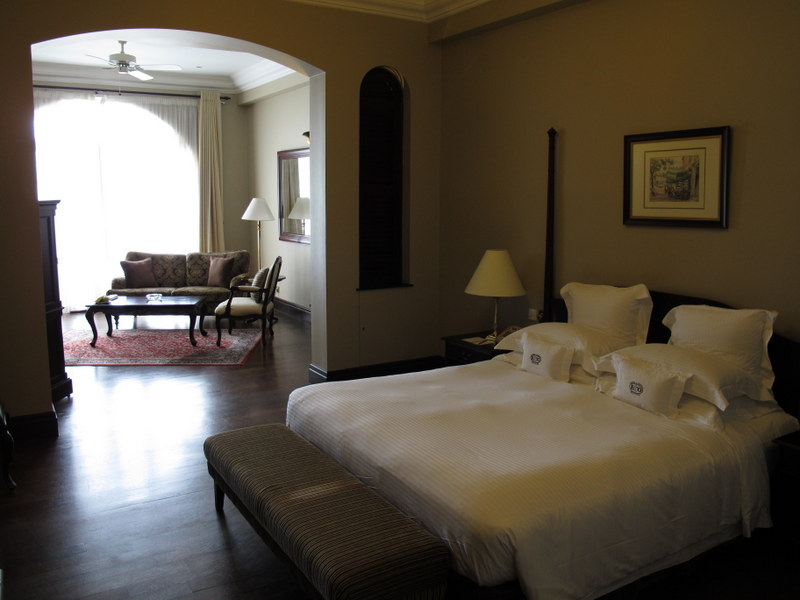 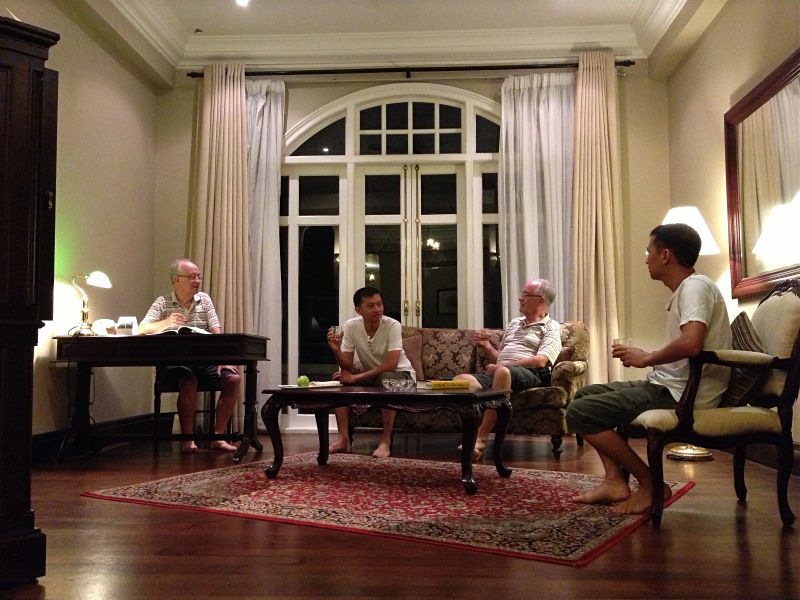 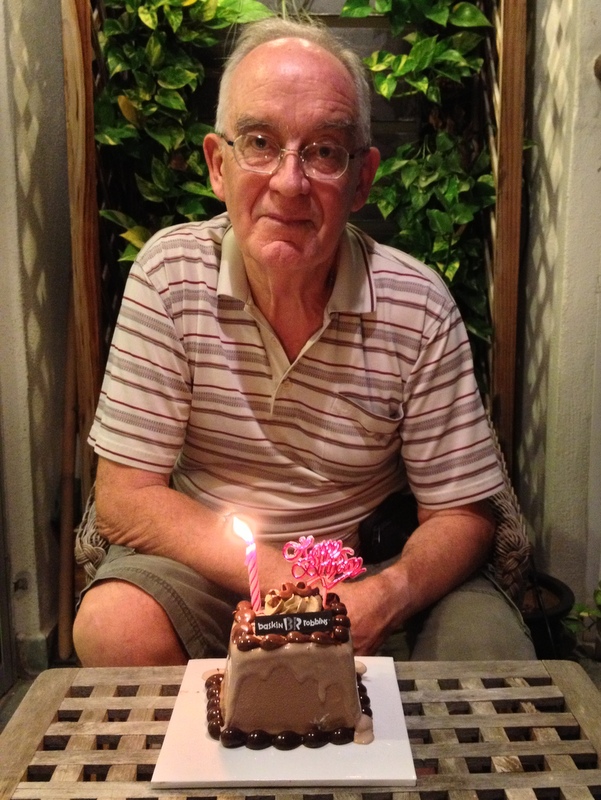 After our successful trip to Upper Tebing Tinggi, Rani accidentally deleted all the pictures from his camera…:-(  Aric has experience in “undeleting” data, so Rani came over for dinner and Aric managed to retrieve the pictures! 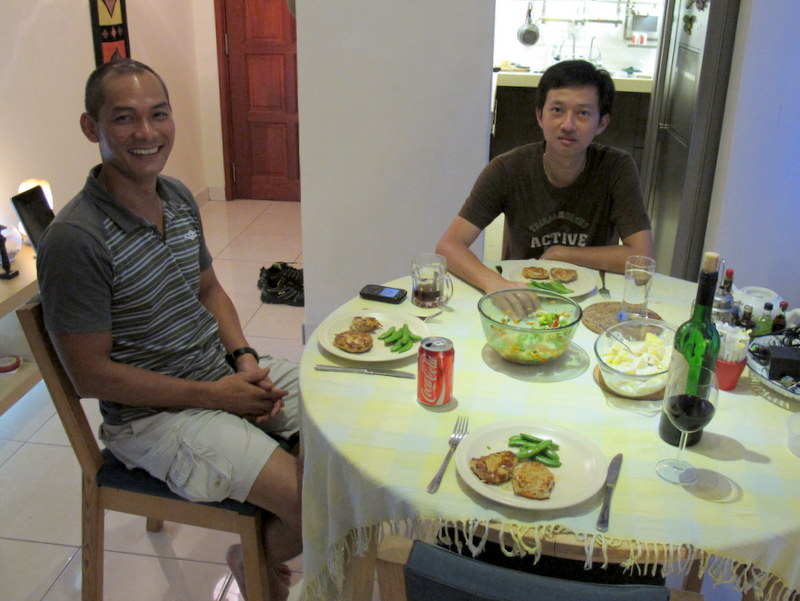 A few days later I went for a haircut, in the nearby shopping center. For 18 Ringgit, less than 5 Euro, ridiculously cheap for  an European, but still considered expensive by my Malaysian friends, who go to an Indian barber for a few Ringgit…:-). Here is the result 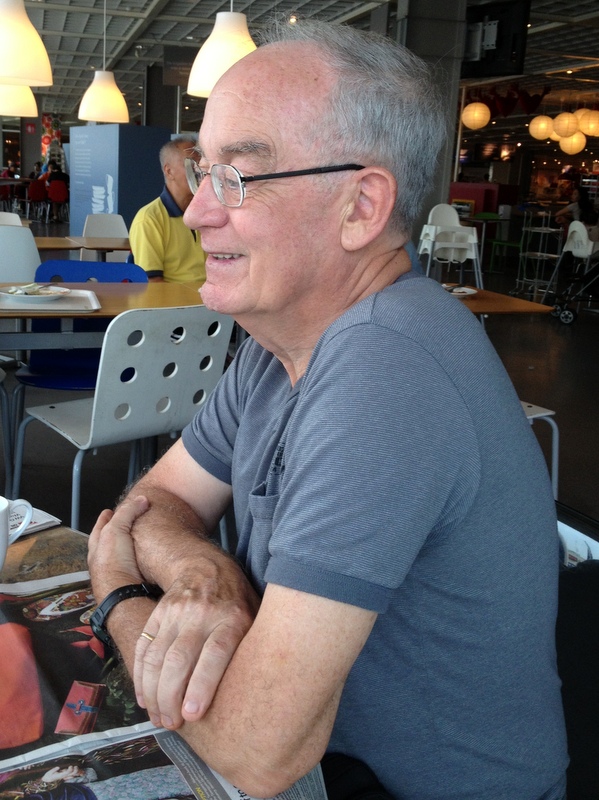 My friend Joe and his wife Beatrice invited me for a party, because of Joe’s birthday. They knew that I would have my birthday the next week, so there was a birthday cake for the two of us. Really nice! Good food, pleasant company. And lots of beer, Joe’s specialty !

A picture of me with my charming hostess Beatrice. 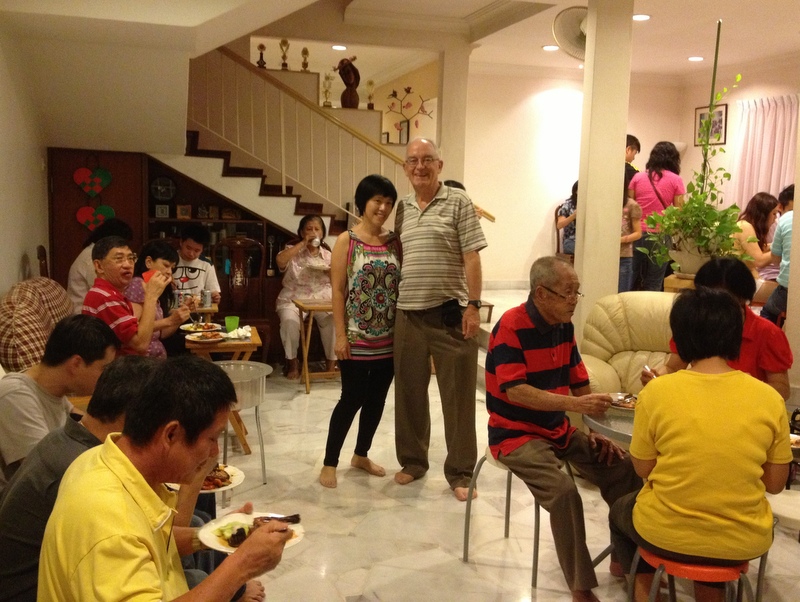 During the weekend I took Rani for a walk in Bukit Kiara, as he had never been there before. Of course I showed him the infamous fence, but we also saw quite a few beautiful bat lilies. 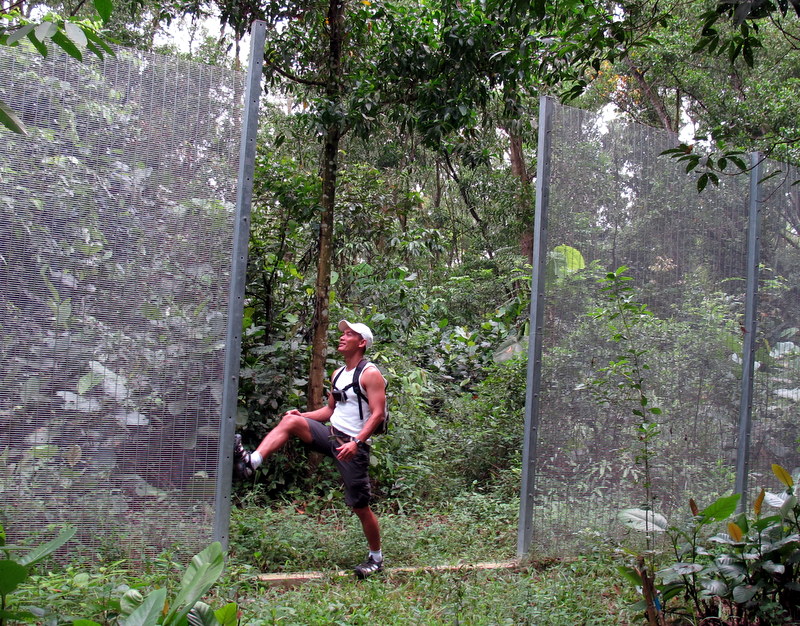 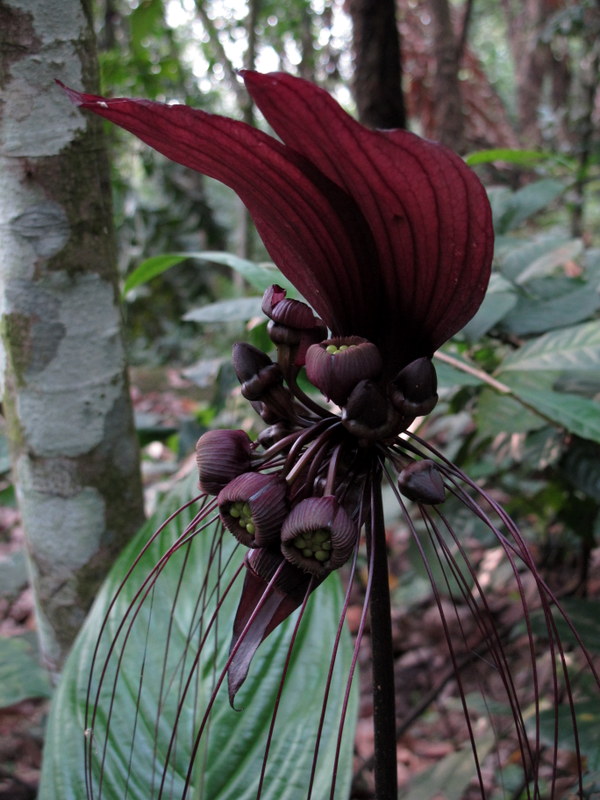 You will have noticed that food plays an important part in my life…:-) Two more dinners in that week. One with Aric’s sister in our favourite seafood restaurant in Damansara Perdana. The second dinner at home with our friends Pat and Wim. Aric was the cook and had done a wonderful job. 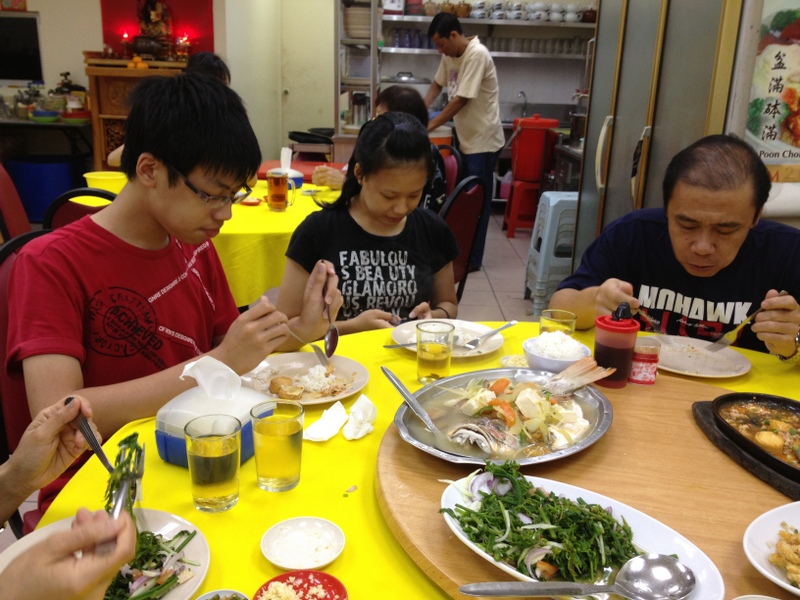 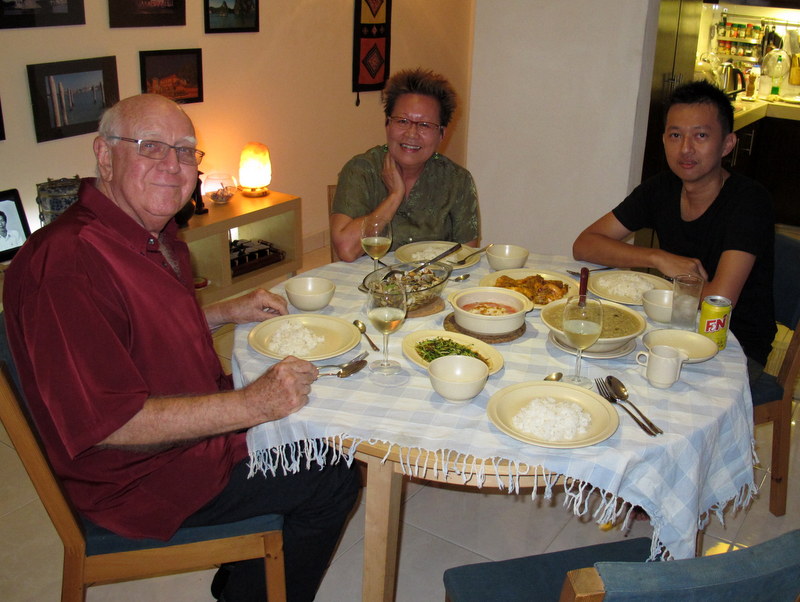 Even with all this food, I still manage to control my weight and even get it down a bit. Hurray!

15 February 2013: A small asteroid enters the Earth atmosphere over Russia. Mass ~11.000 tonnes, size ~20 m and speed ~18 km/s. At an altitude between 15-25 km it explodes, causing a shock wave on the ground resulting in about 1500 people hurt (mostly by scattered glass) and ~ 7000 buildings damaged. Estimated energy 440 kilotons of TNT,  equivalent to ~25  times the energy of the  atomic bomb on Hiroshima, most of it absorbed in the atmosphere. This asteroid had not been discovered before its impact.

On the same day  about 15 hours later, asteroid 2012 DA14 passes Earth at a distance of only 28.000 km (that is within the orbit of the telecommunication satellites!). Bigger (about 40.000 tonnes and 30 m), it was discovered in February 2012. Although occurring almost simultaneously, the two events are not related.

Next year, 19-10-2014,  comet C/2013 A1 will pass extremely close to Mars, with a small possibility of an impact with the planet. Here we are talking about a different order of magnitude! Estimated size of the comet nucleus is ~ 3km! IF it would hit Mars, the energy released would be in the order of millions of Megatons of TNT. For comparison, the asteroid that struck Earth 65 million years ago and ended the dinosaur era on Earth  was only about three times as powerful. 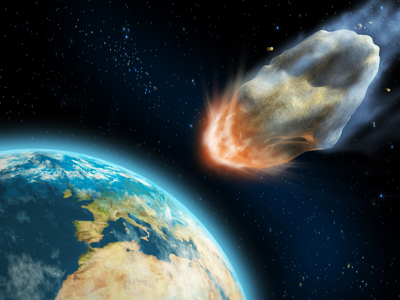 Do we have to get worried? In the aftermath of the Chelyabinsk meteor there was a lot of commotion in the media that action should be taken immediately to protect us from future collisions. Suggesting that nobody had expected this. As if the scientific world was not already aware of this problem!

Those outer space objects (asteroids, meteorites, comets) that can come close to (or even hit) Earth are called Near Earth Objects (NEO’s). Because of the impact risk they are monitored already for decades. The problem is that there are many of them and that they come in all sizes. Here is a graph of their distribution. The blue line gives the number of known NEO’s, the red line is a estimate of their total number. Please note the double logarithmic scale of the graph! For example, only about 100 NEO’s with a size of ~10 meter have been observed, whereas the estimated total number is ~ 10 million! 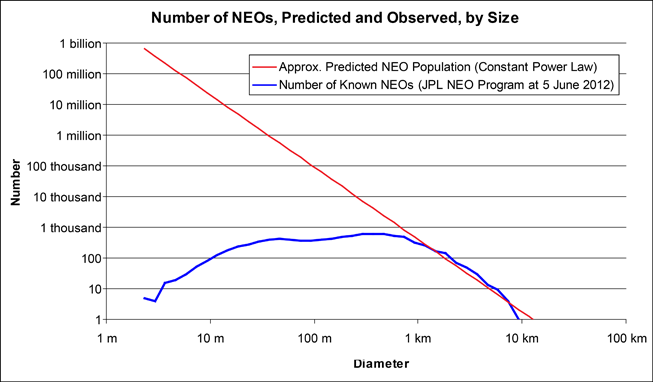 At the moment about 10.000 Near-Earth objects have been discovered. About 900 of them are asteroids with a size of 1 km or larger.

Here is a table with (statistical) information about the impact of a NEO. The second row gives data for objects with a size of 30 meter. The 2012 DA14 falls in this category. The effect of impact: a fireball, a shock wave and minor damage. Fits quite well the Chelyabinsk meteor, although it was smaller. The second column gives the average time in years between impacts of this size: 300 year.

If comet C/2013 A1 would have been on a (near) collision course with Earth, it would fall in the category: Billions of people dead, global climate change. Time interval: millions of years.

Followers of my blog may remember the post about Apophis At the time of discovery there was worry that it might hit Earth. We know now that the probability of impact is negligible. With its estimated size of 300 m it would create havoc, but no global destruction. 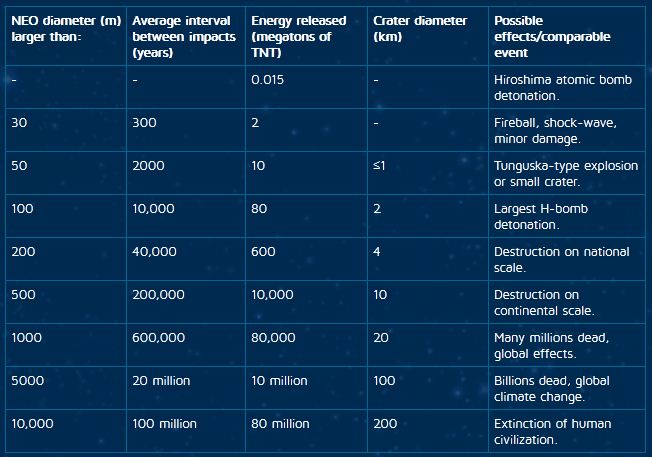 If a NEO on collision course is discovered early enough, it may be possible to deflect it. Numerous proposals exist. See my post Paintballing Apophis or do a Google search on “deflecting a NEO”

Conclusion: Earth runs a risk of an impact with a NEO. It is not a matter of IF but of WHEN. Early observation of “dangerous” NEO’s is important, so protecting measures can be taken. That is why there are global initiatives, like for example  NEOShield

For this post graphs, tables etc have been taken from this very informative site.

A few years ago a waterfall friend of mine sent me a picture of the Upper Tebing Tinggi fall, taken from a helicopter. The fall looks impressive and is also clearly visible on Google Earth. Close to and a bit similar to the Lata Puteh waterfall, which is visible from the Lenggong-Bagan Serai road. But this Upper Tebing Tinggi is more remote, so the question was, is it accessible?

It became my dream, to visit this waterfall and see it with my own eyes…:-) 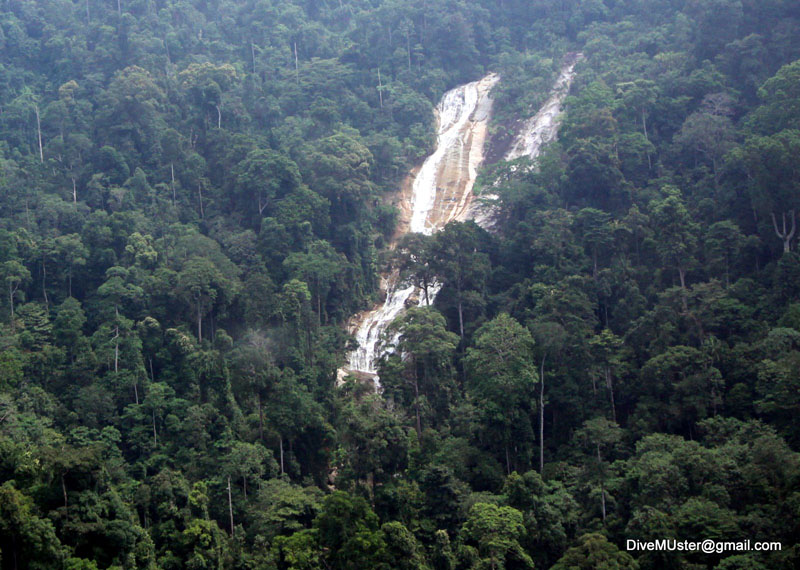 A few weeks ago I did a recce with my friends Paul and Rahim. Starting from the road, the slope is very steep, but fortunately there is a old water pipeline, leading to a water catchment. There are also old overgrown logging roads. We reached the river upstream of the (lower) Tebing Tinggi fall, about 600 m from the upper fall. It seemed doable! Our recce is the red track in the map. Locations of Lata Puteh and Upper Tebing Tinggi are also indicted. 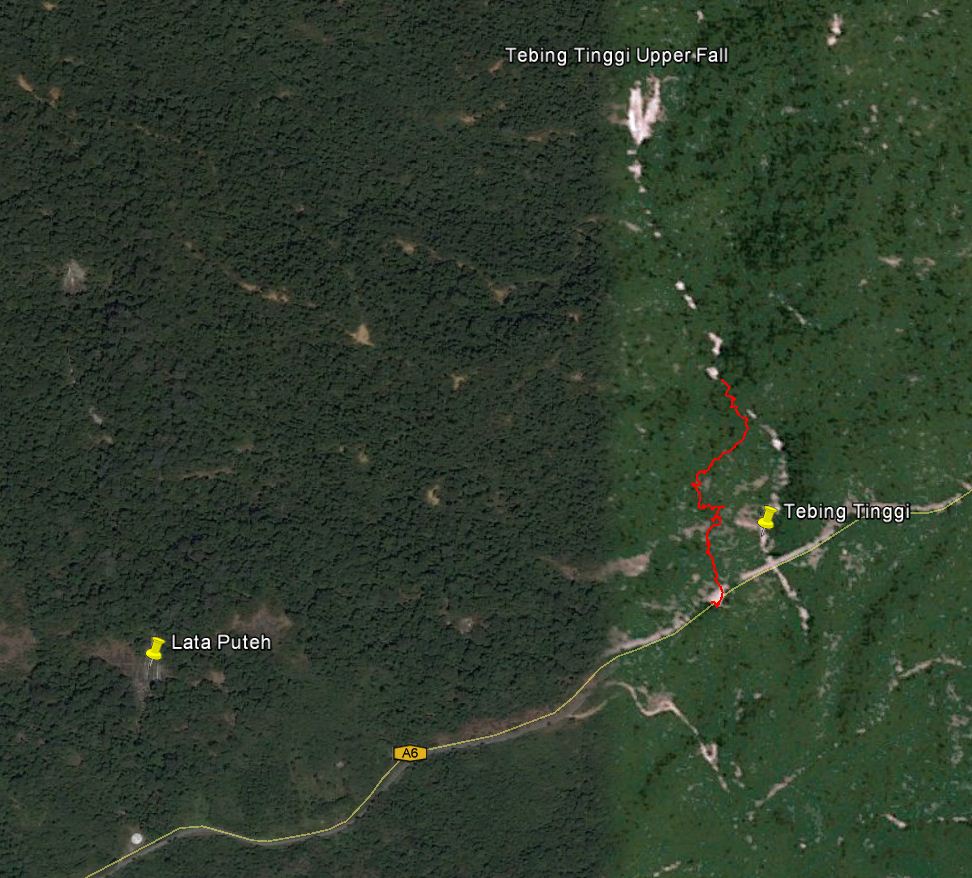 Because of its remoteness and keeping in mind my mishaps of last year, I wanted to have a strong team, who could carry me out in case of emergency…:-). Siang Hui, Teoh, Rani and Aric were willing to join me. Here we are ready to start our adventure. 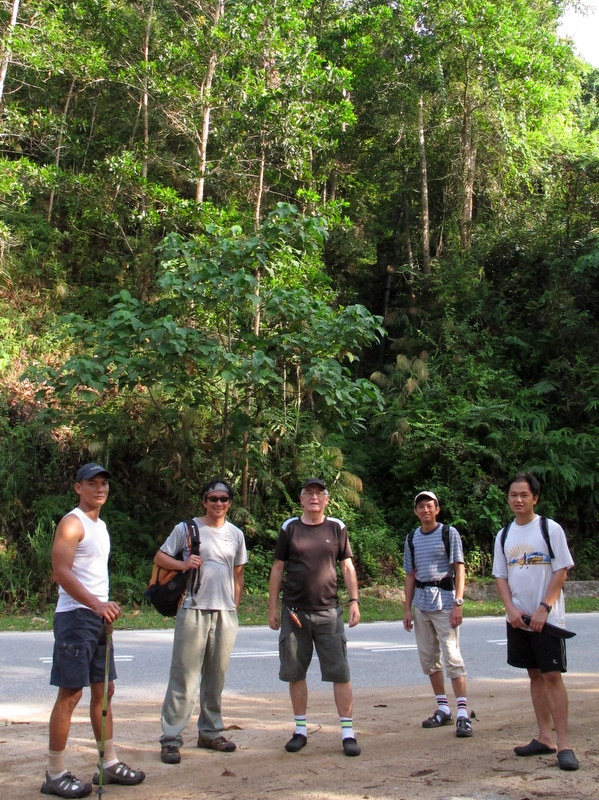 It was a tough hike, which took us in about three hours to the waterfall! I was really happy, that my dream had come true. 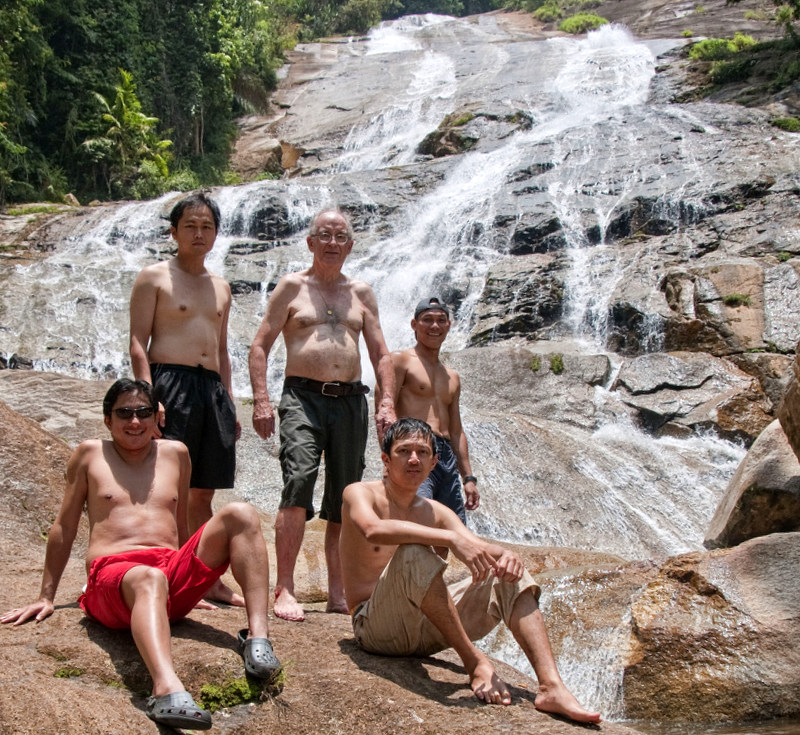 I have published a detailed report about our trip (nice food, more waterfalls) as a Stuif’s Adventure. And here is a YouTube video of the waterfall: