When you search Wikipedia for  Venice of the North, you will see that quite a few towns in various countries are so nicknamed. In my opinion Amsterdam really deserves that title, with its numerous canals and about 1500 bridges. But Giethoorn is also sometimes called the Small Venice of the North.  It is a village in the Dutch province of Overijssel. In the map of Holland I have indicated the location. 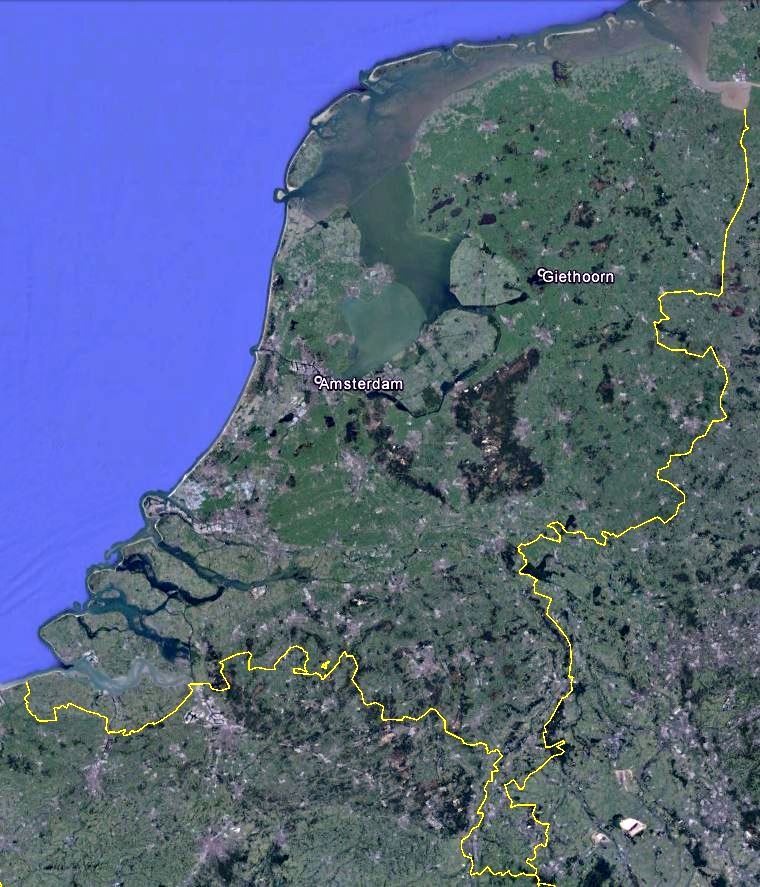 Giethoorn is a tourist attraction, especially popular with Chineset tourists. I had been there once, many years ago, it was Aric who had read about it and was interested to visit it. We went by public transport, first by train, then by bus. Giethoorn is located in what was in earlier times a peat swamp. What remains are lakes and many canals, used in the past to transport the peat. In the map below I have shown the route we have walked. Cars can not enter this part of the village, you have to walk or rent a boat.

We were advised at the tourist office to walk. Most (mainly Chinese) tourists rent a punt. In the past you needed a pole to move it (not easy), now they are provided with a silent electric motor and called “whisper boats” 🙂 Restaurant menus and the timetable for the bus were available in Chinese. 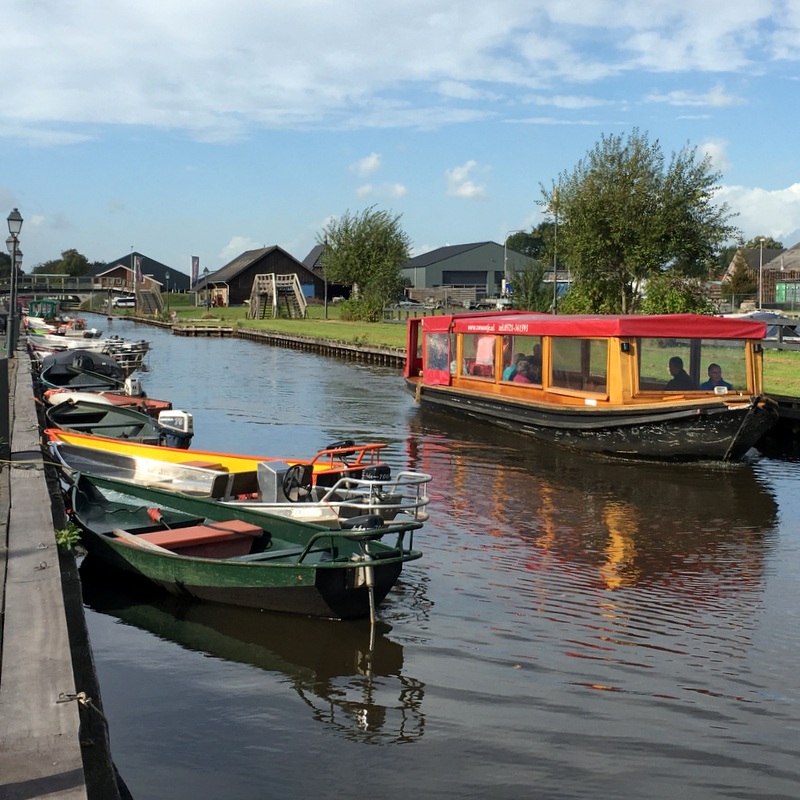 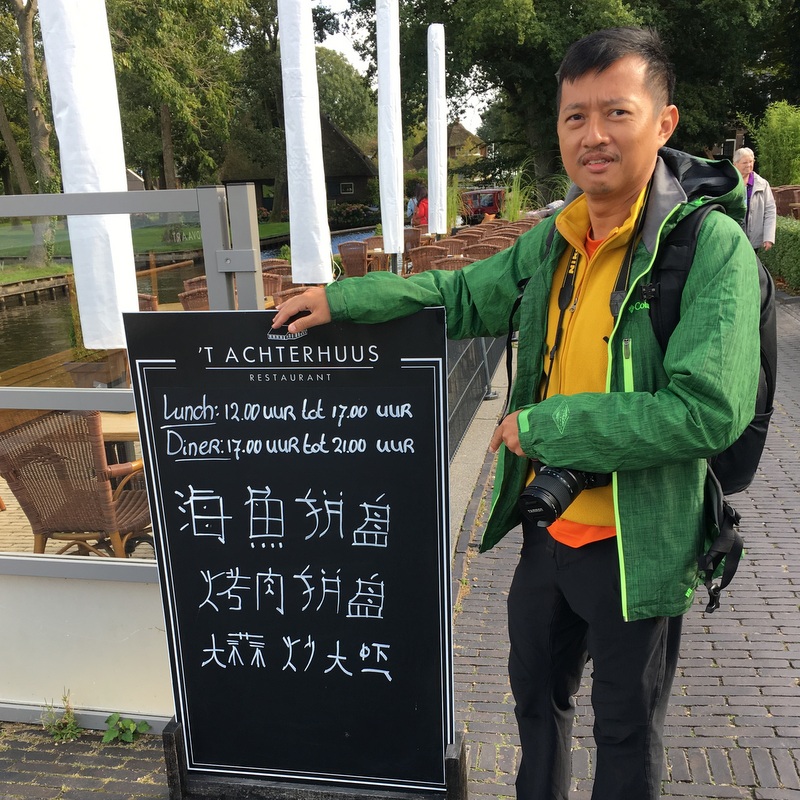 When you reach the foot/bicycle path, you feel like entering a different world. Thatched houses, many on their private island, only reachable by wooden bridges. We were lucky to visit Giethoorn off-season, it was relatively quiet.

Here a collection of pictures, it is difficult to stop taking photos. Click to enlarge

Halfway we got a bit hungry and decided to stop at the Smits pavilion, surrounded by water. I was expecting they would serve “uitsmijter” , a traditional Dutch lunch, but that was not the case. The frikandel with fries was an acceptable alternative. 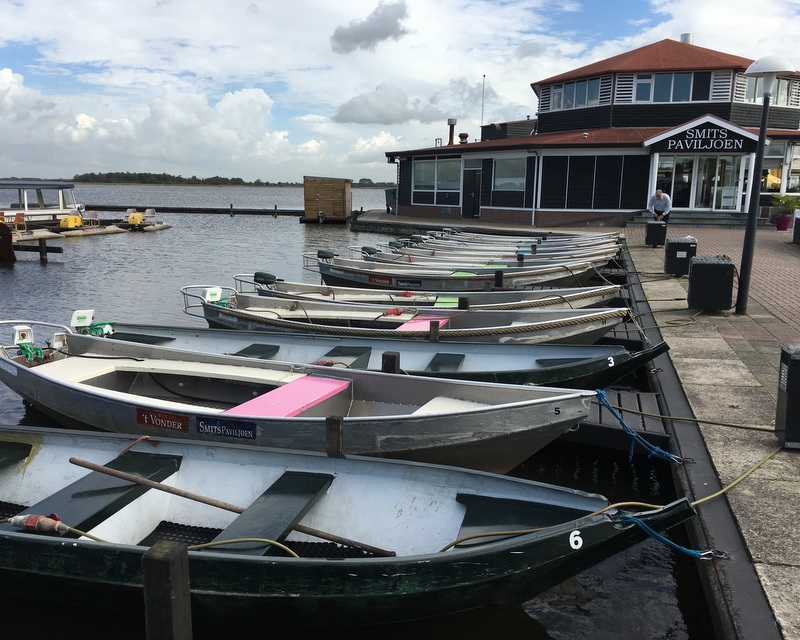 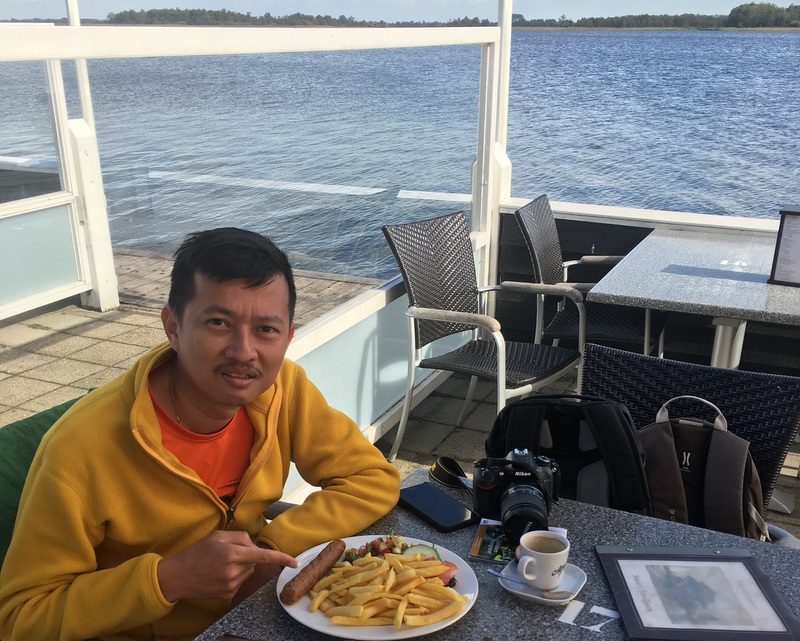 For Chinese couples it is customary to make a wedding album before the actual wedding takes place. A professional photographer chooses romantic locations for the photo shoot. Here a couple had come to Giethoorn! It proves the popularity of the place with Chinese..:-) 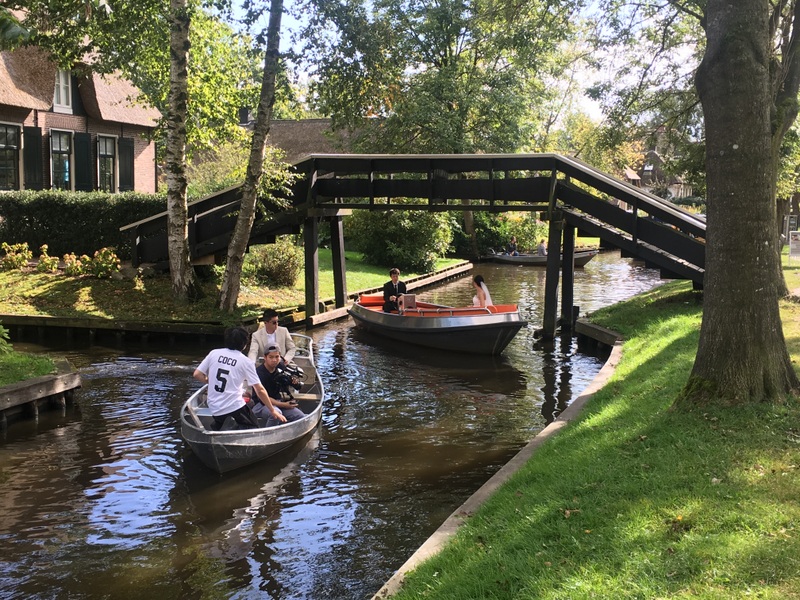 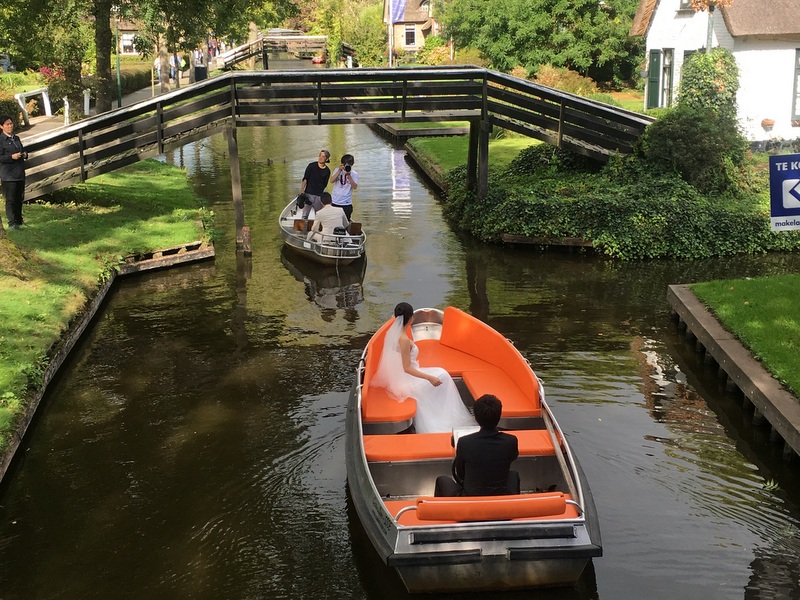 When you mention Giethoorn to a (senior?) Dutchman, they probably will reply: Of course, Fanfare! Fanfare is an iconic Dutch movie, shot by movie director Bert Haanstra in 1958. You can say that the movie put Giethoorn on the map. The cafe where part of the action took place, still exists and is of course now called Fanfare 🙂 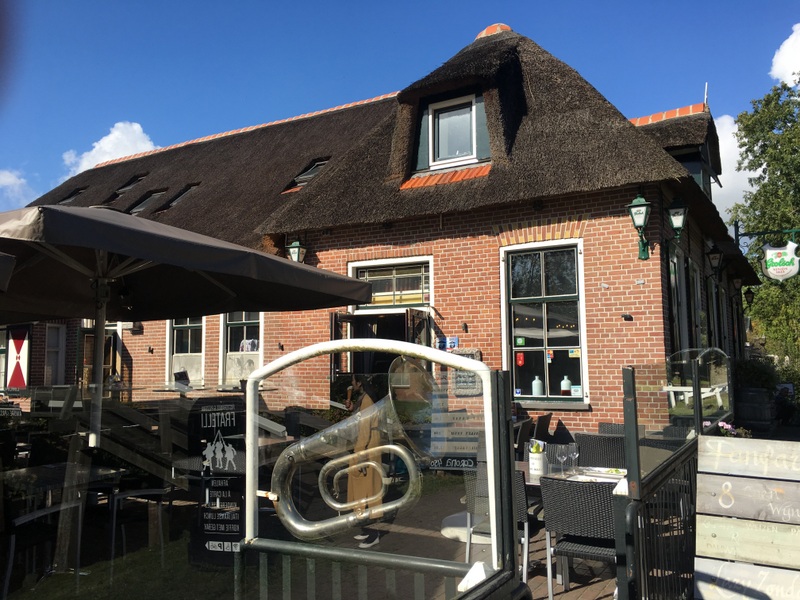 The movie is available on YouTube. It’s a comedy, worth viewing. English subtitles.

We enjoyed the trip tremendously. The statue which Aric is trying to imitate, depicts Albert Mol, one of the Fanfare actors. Of course he also had to try the giant wooden clogs. The giant leaves in the last picture you would expect rather in the tropical jungle..:-) 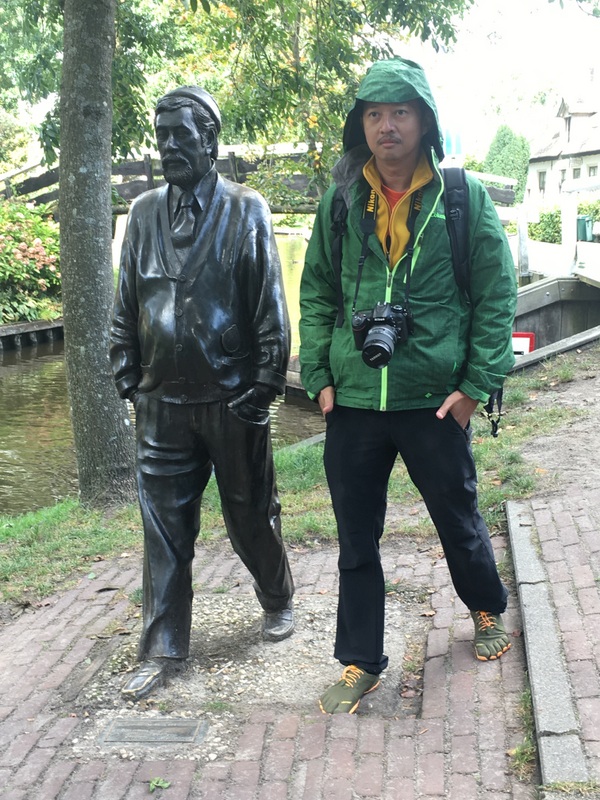 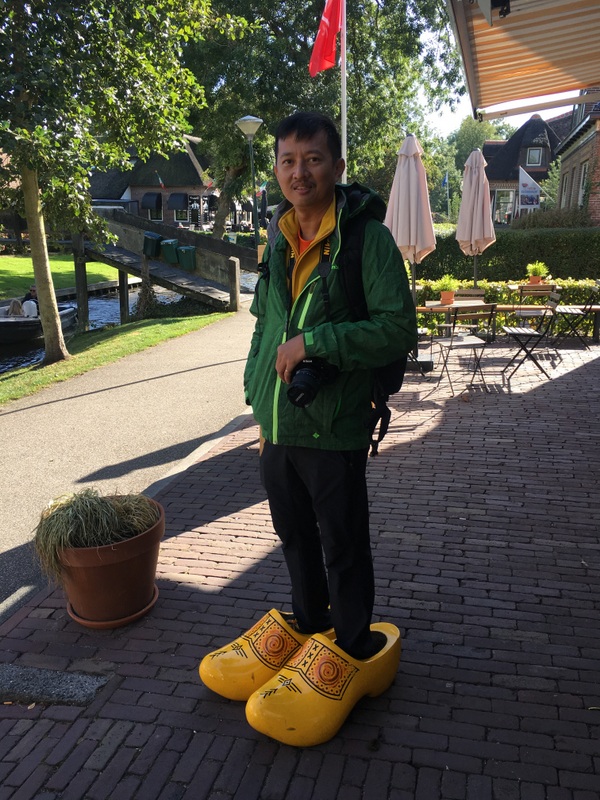 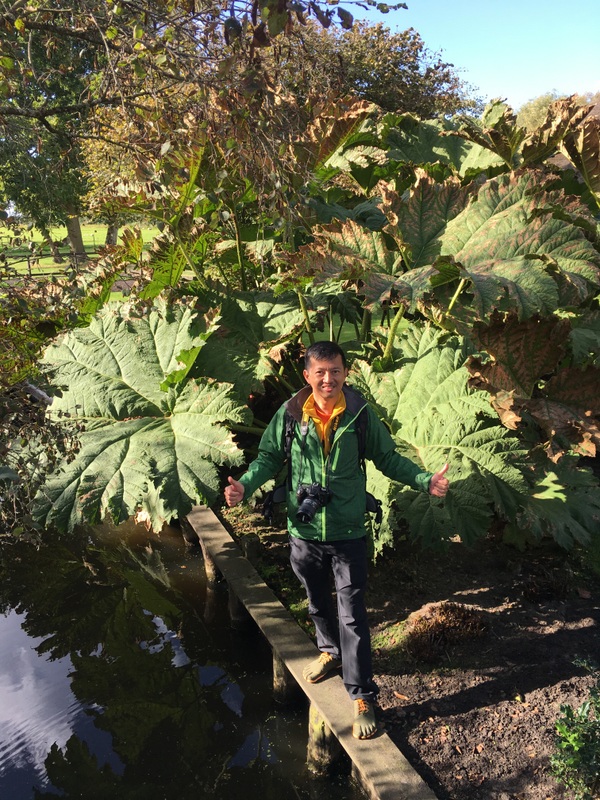 Many houses in Giethoorn still have traditional thatched roofs. They are beautiful but expensive, € 90 – € 110 per m2. Thatching a roof or repairing it, requires skill, as you can see in the last picture.

One last image of Giethoorn. Visit this Venice of the North when you get the chance!