The Haleakala volcano is located on the island of Maui, the second-largest island of Hawaii. On the top of this extinct volcano, at an altitude of 3055 m, an astronomical observatory has been built. One of the telescopes in this observatory is the Pan-STARRS telescope, with  a 1.8 m diameter mirror and equipped with the largest digital camera ever built, recording almost 1.4 billion pixels per image 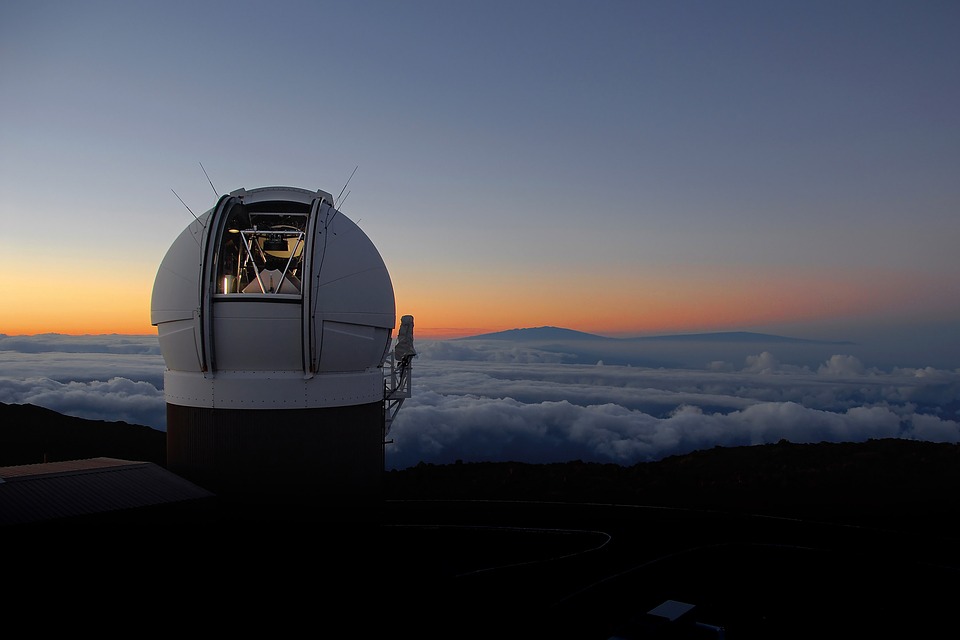 The function of this telescope is to scan the sky, looking for moving astronomical objects, like comets and asteroids. The idea is simple, you take two pictures of a part of the sky, at different times and compare them.

In 1930 the planet Pluto has been discovered this way. Here are the original photographs, taken 6 days apart, the arrows point to Pluto. In those days the astronomer used a gadget, called a blink comparator, which rapidly switched from viewing one photograph to viewing the other. The moving object would stand out by “blinking”. 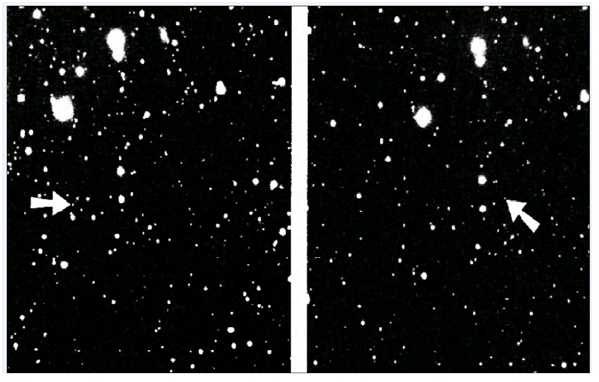 Nowadays computers can do this much better than humans, and Pan-STARRS is connected to a sophisticated computer system, that not only analyses the images, but also communicates with other observatories all over the world, when moving objects are found.

The interest in these objects is not only scientific. Pan-STARRS is taking part in the NEO Search Program. NEO stands for Near Earth Object, and NEO‘s are objects, mostly asteroids, that could collide with Earth in the future. Readers who have been following my blog from the start, may remember my posts about the asteroid Apophis, published in 2010(!). In 2013 Pan-STARRS had already discovered 10.000 NEO’s

On 19 October 2017 a new moving object was discovered by Pan-STARRS.  At first it was assumed to be a comet, and named C/2017 U1   but as it had no characteristic comet tail, it was reclassified one week later as an asteroid : A/2017 U1

A short intermezzo about the classification of comets. The first letter describes the kind of object, P for a periodic comet, C for a comet with unknown period and A for an object that was first classified as a comet but is actually an asteroid. There are a few more categories. The letter is followed by the year of discovery and by a letter that indicates the “half-month” of discovery. A for the first half of January, B for the second half, C for the first half of February, etc. The letter I is not used, so the U means that the object was discovered in the second half of October. It is here followed by the number 1, because it was the first discovery in that half-month.

Further observation of this asteroid, by many other observatories, showed that it came from OUTSIDE our solar system!

A few years ago I have published a post about NEO’s,  Visitors from Outer Space, but Outer Space stands there for the Kuiper Belt and the Oort cloud, both still belonging to our solar system.

So this was an EXTRAORDINARY event, the first observation of an object that came from another star! On 6 November 2017, less than three weeks after its discovery, it was reclassified again, as 1I/2017 U1 , where a new category was introduced, I, standing for Interstellar object. The number 1 in front of the I was added, because it was the first occurrence of this new category. And it was given a proper name: ʻOumuamua, which in the Hawaiian language means “a messenger from afar arriving first“. The symbol ʻ in front of the name is not a typo, but a ʻokina, a glottal stop.

How do the astronomers know that it comes from outside our solar system? By its speed and its orbit! Here is an animated gif of ʻOumuamua’s orbit.

The orbit is hyperbolic ! From far away it approached the solar system with a velocity of ~26 km/s. Attracted by the Sun, its velocity increased to ~88 km/s at perihelion, on 9 September 2017. When it was discovered by Pan-STARRS, 40 days later, it was already on its way out. 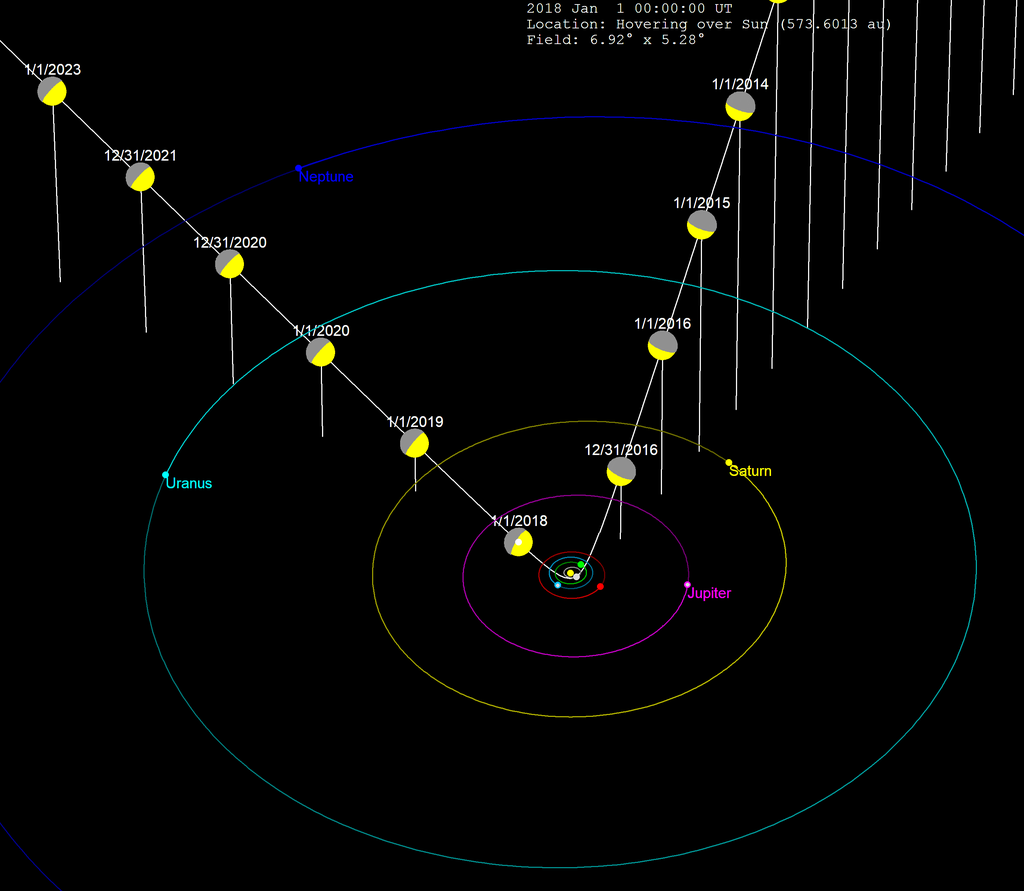 Is there anything more that we know about this visitor from outer space? For example from which star it started and how long it is underway?  It arrived roughly from the direction of the star Vega, 25 lightyear away. In that case, with its velocity it would have taken ~ 600.000 year to reach our solar system. But Vega was not in the same location, that long ago. We just don’t know, ʻOumuamua could have left its star system billions of years ago.

Surprisingly we know a bit more about its shape, its size and its color! The color is dark reddish and the size is roughly 200 x 30 m.  A kind of gigantic cigar…:-) Here is an artist impression

You may wonder how anything can be said about the shape, as the image of ʻOumuamua is only a single pixel in even the strongest telescopes! The answer is that the asteroid is “tumbling” with a period of ~ 8 hours. Therefore the amount of light it reflects varies.

Here are the measurements done by several telescopes, with a theoretical fit, assuming a 1:10 ratio between length and width  Click to enlarge.

Of course there are people who are wondering if it could be a spaceship…:-). In that case it would probably be out of control or abandoned, because of the tumbling. Anyway, both SETI and Breakthrough have been listening for any signals coming from ʻOumuamua. Without results. 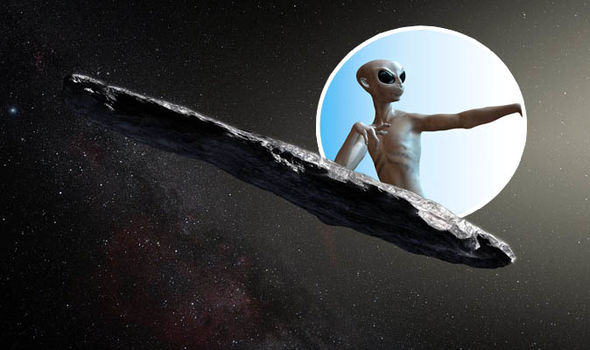 For this blog I have used the very informative Wikipedia article about  ʻOumuamua and other Internet sources.