In 1858 a young Chinese boy, 13(!) year old, decided to leave his home province Guangdong (former Canton) and try his luck in Singapore. His name was Wong Loke Yew. He worked there in a provision shop, before starting his own store. Business went well and  in 1867 Loke Yew decided to go to Perak, where he was active in tin mining and other business. In the 1880’s he moved to Kuala Lumpur, where he stayed the rest of his life until he died in 1917.

A remarkable man, his life is described in more detail in an interesting blog Overseas Chinese in the British Empire.

I had come across his name a few years ago, when I visited the Sam Wong Yah temple in Kamunting, built in 1882. Loke Yew was a supporter and patron of this temple and  the caretaker showed me the wooden bench used by Loke Yew as a bed when he visited the temple. Proof that even though rich,  he remained a humble man.

Left the interior of the temple, right the bench. 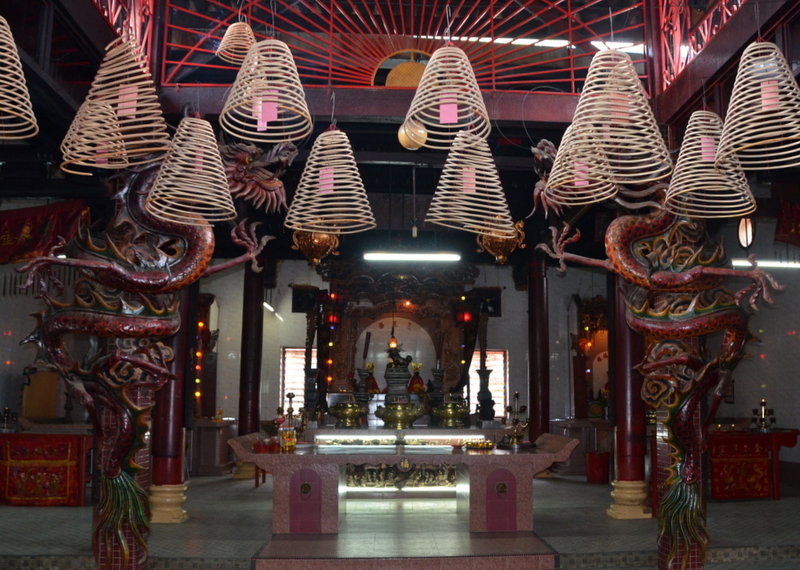 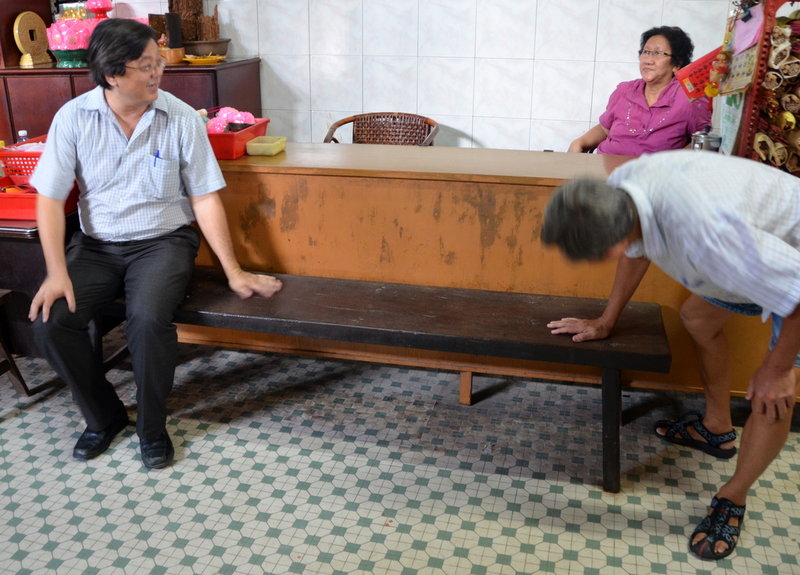 Recently Bernard, a geocaching friend of mine, told me that there existed a Loke Yew Graveyard in Kuala Lumpur! We are both interested in cemeteries, would I like to join him in an “expedition” to this graveyard? Of course I accepted his invitation.

And an expedition it turned out to be…:-). Because the graveyard is located in Desa Tun Hussein Onn, a military residential complex in Kuala Lumpur (below outlined in green). You need a permit as a civilian to enter the village! 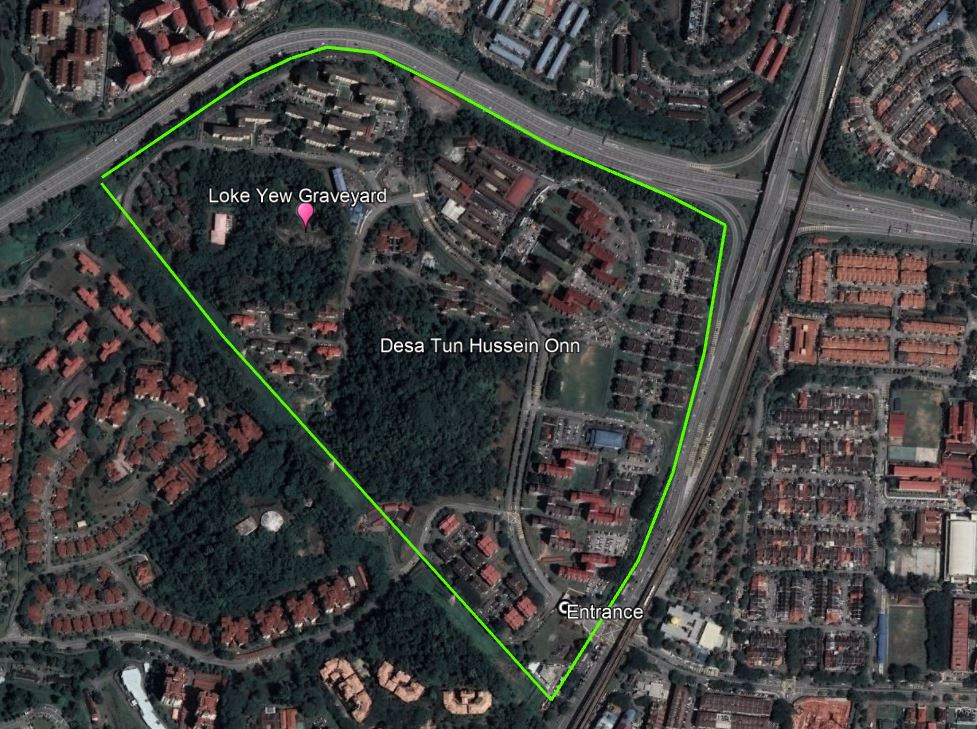 When we arrived at the entrance of the village, and told  an officer that we wanted to visit Loke Yew’s graveyard, it took Bernard considerable time to convince the officer of our honest intentions. It helped that the officer was interested in history and rather surprising that he did not know anything about the graveyard, although he had been living for many years in the village!  We got our permit..:-)

Naively I had expected that there would be a clear access road to the graveyard, we drove around the hill, but didn’t find any signboard. However, we noticed something that looked like a trail, followed it, and indeed, we reached the graveyard, but there was a solid fence and a locked gate.  At least I could take a picture  🙂 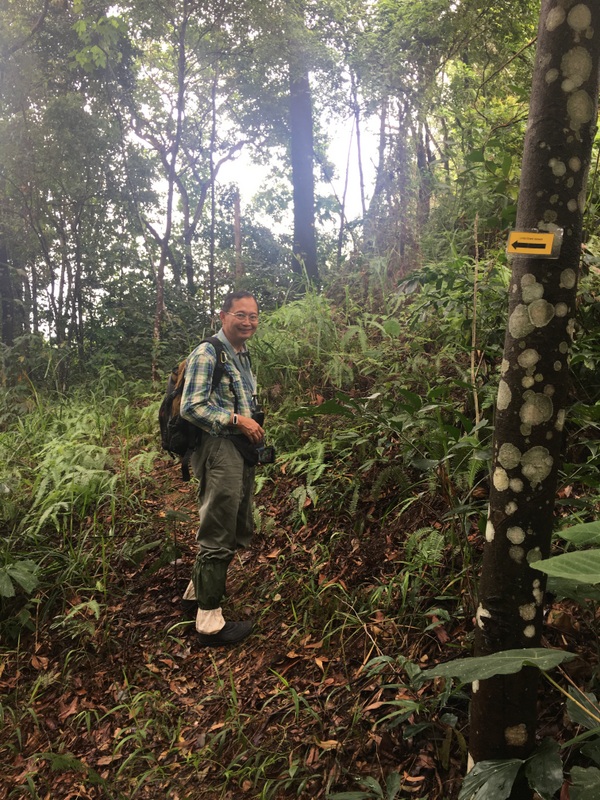 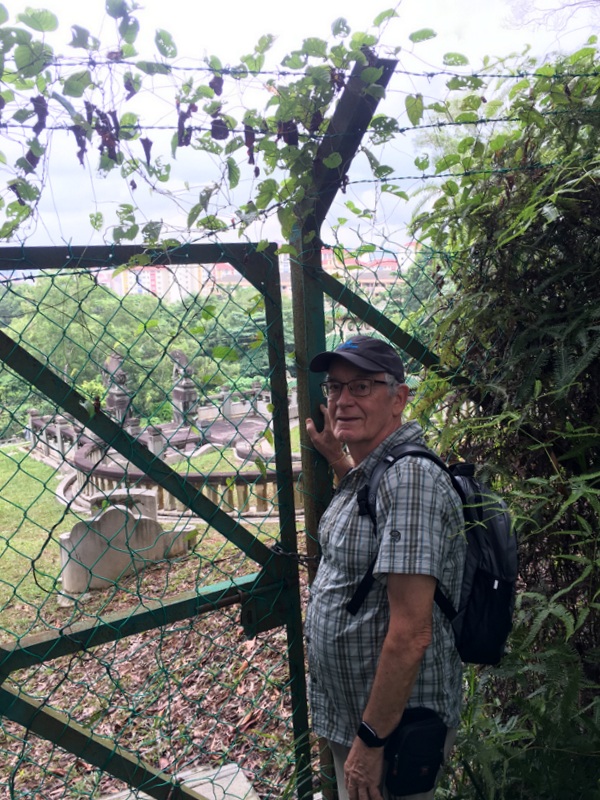 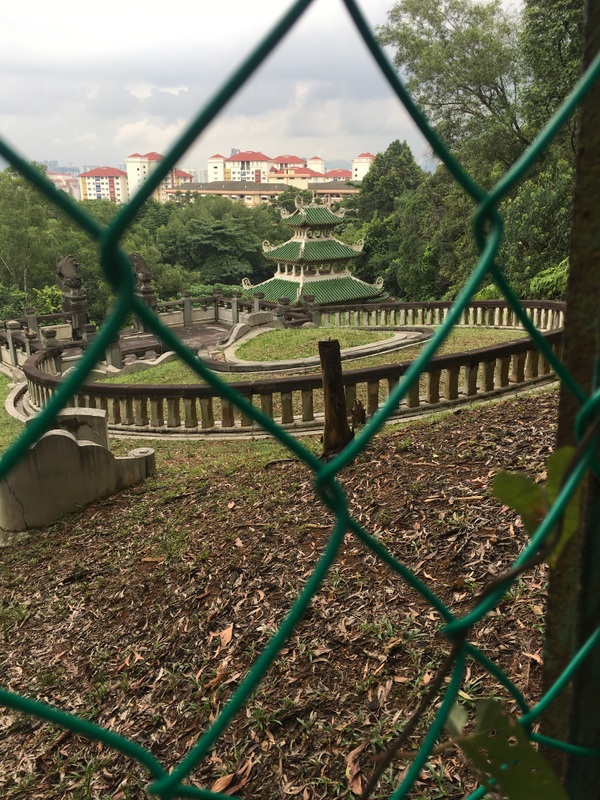 We didn’t give up and tried another access, from near the  school, climbing the stairs, then turning right along the wall. 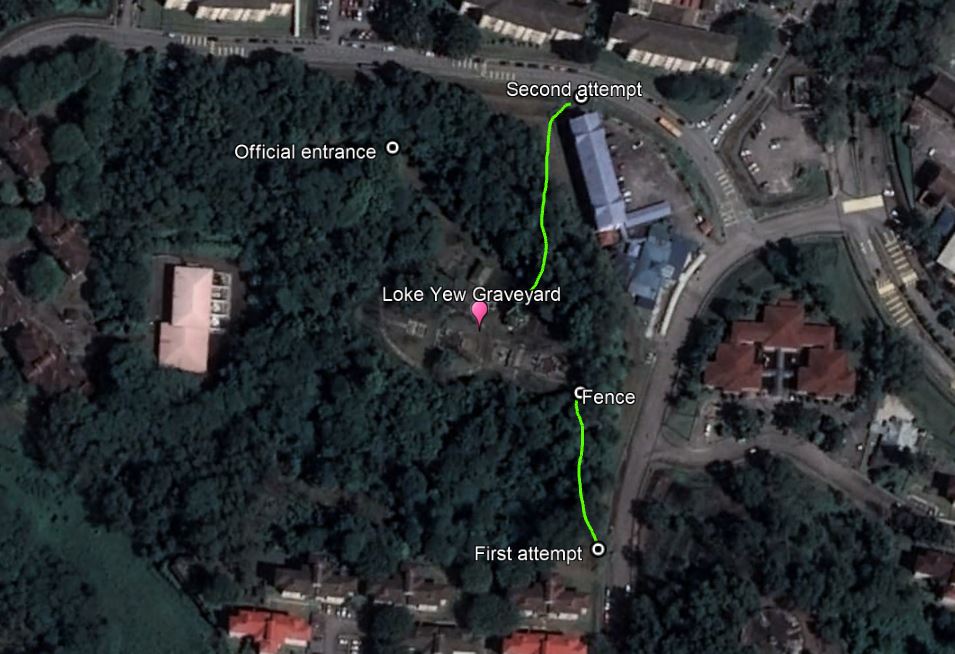 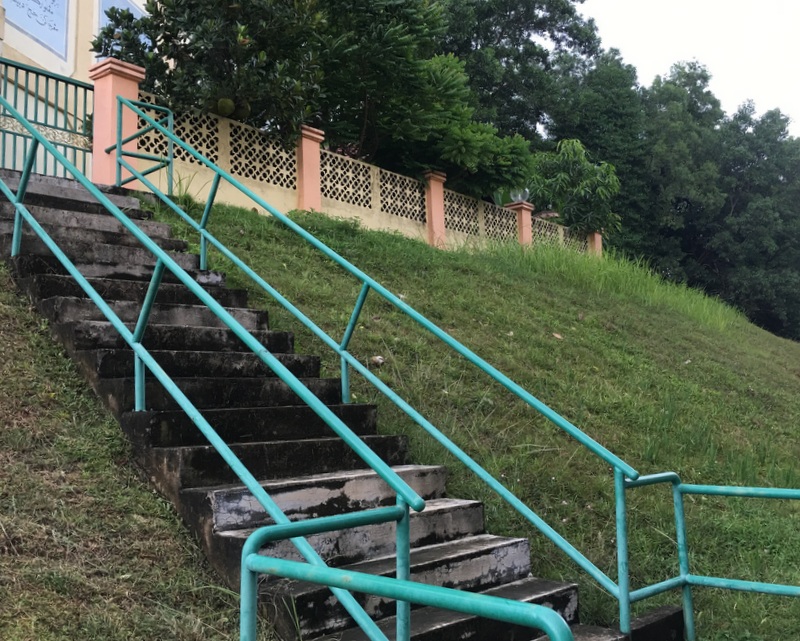 We were of course more or less expecting that we would again be blocked by a fence.  But no, this time, after some jungle hiking, we could enter the graveyard!

A beautiful place, on the slope of the hill, good feng shui. Dominated by a statue of Loke Yew. An elaborate memorial hall next to it. Amazing that this exists in KL..:-) 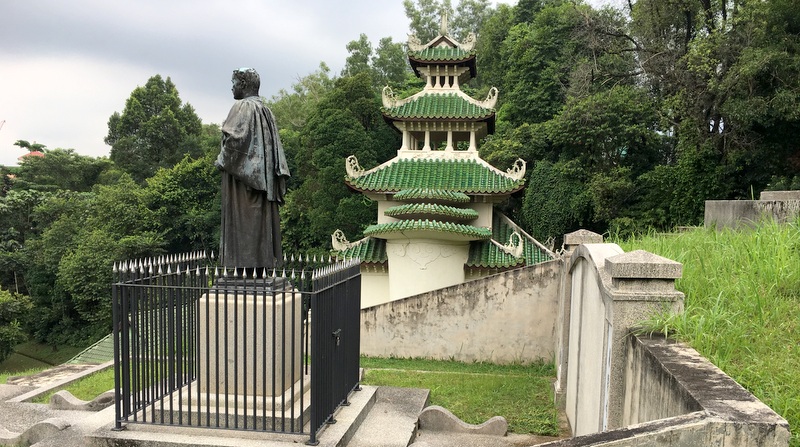 From the top of the hill we had a view of sprawling Kuala Lumpur. Guardian lions kept watch over the graveyard. 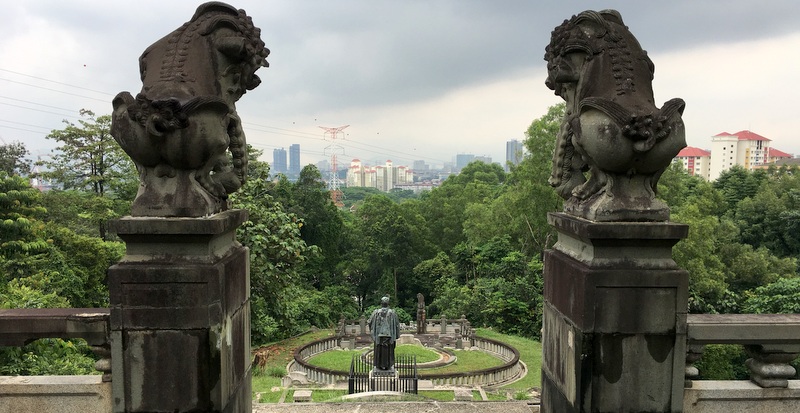 You find these guardian lions often at graveyards. Lots of symbolism, see the Wikipedia article Chinese Guardian Lions. The lions have a “pearl” in their mouth, a stone ball which can move freely inside, but not be removed. Unfortunately there had been vandalism, the mouth had been broken and the ball inside was gone.

One of the  lions is male, the other female. Of course we had to check..:-) 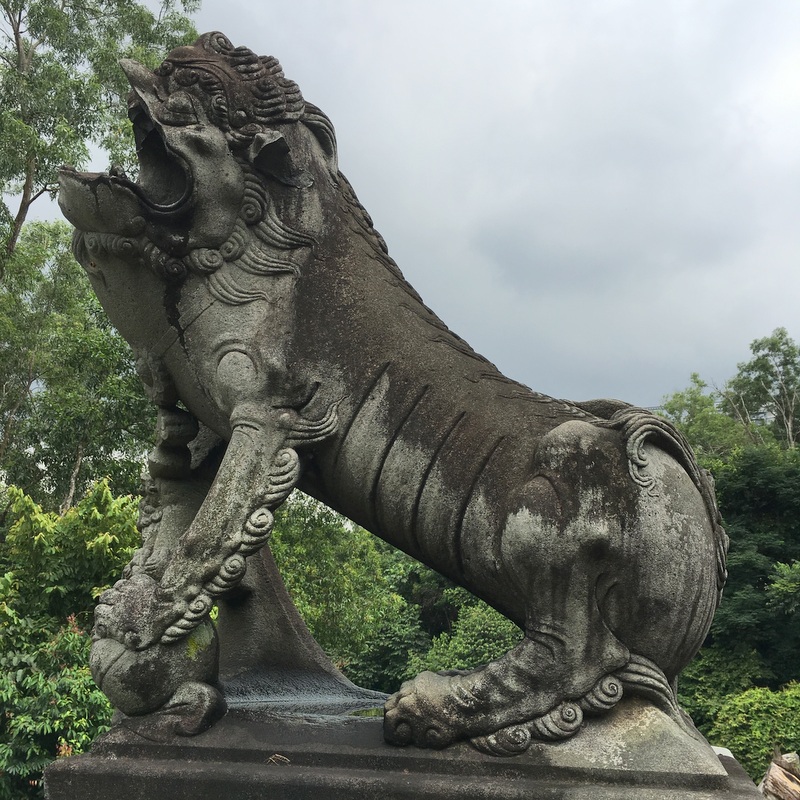 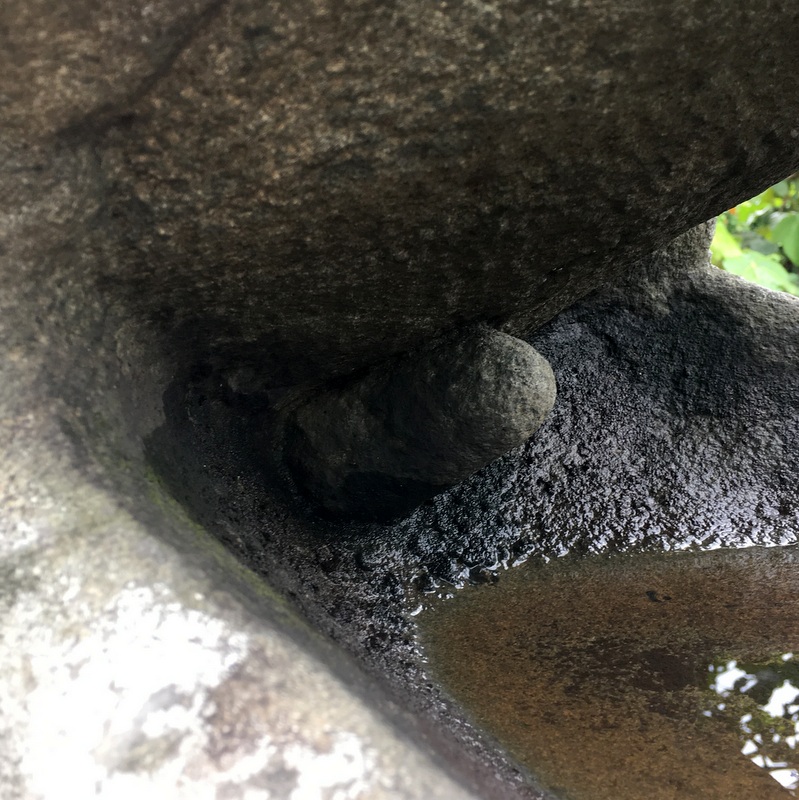 There were many more signs of vandalism and graffiti. Even the secluded location does not fully protect the graveyard. Imagine how bad it would be if this place was easily accessible.

The graveyard itself looked good, the grass was cut, there must be regular maintenance, probably by the family. Not only Loke Yew has his tomb here, also several of his descendants. 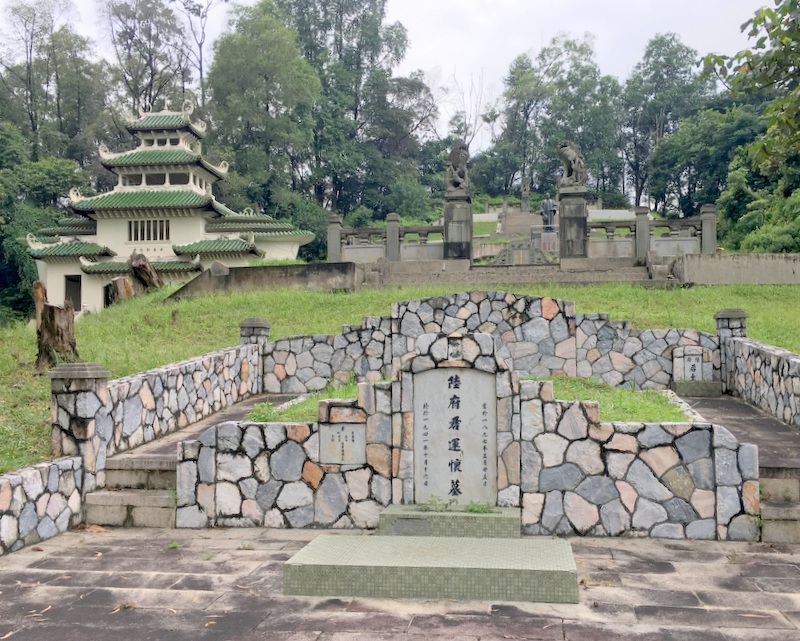 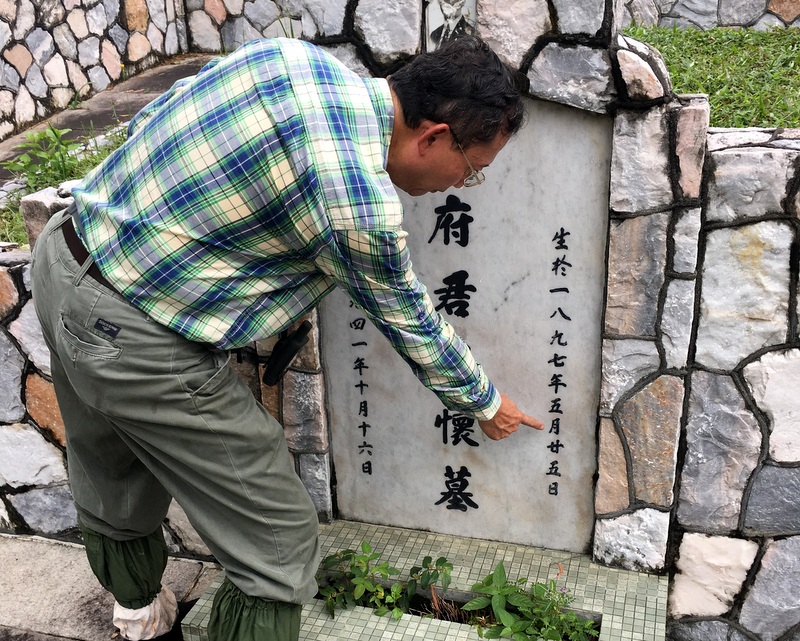 Walking down the hill we arrived at the “official” entrance, closed and heavily protected with barbed wire. 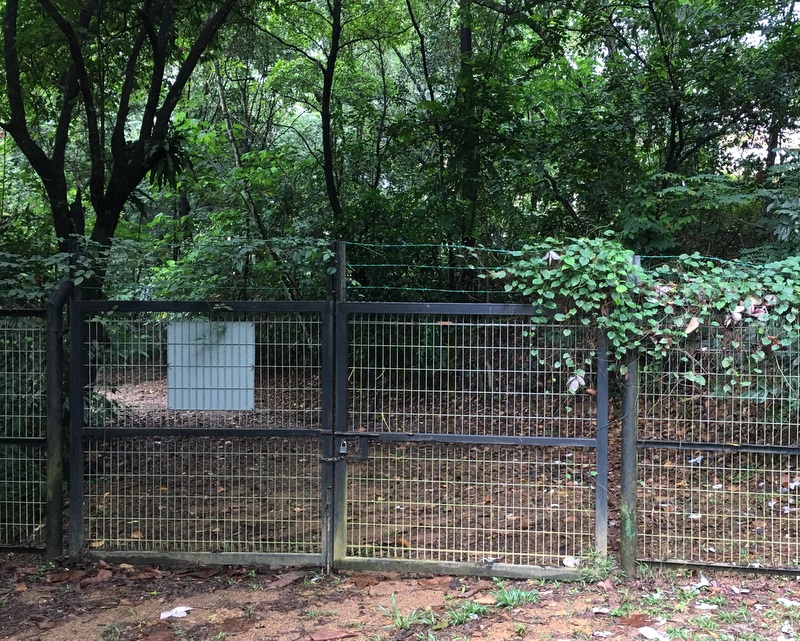 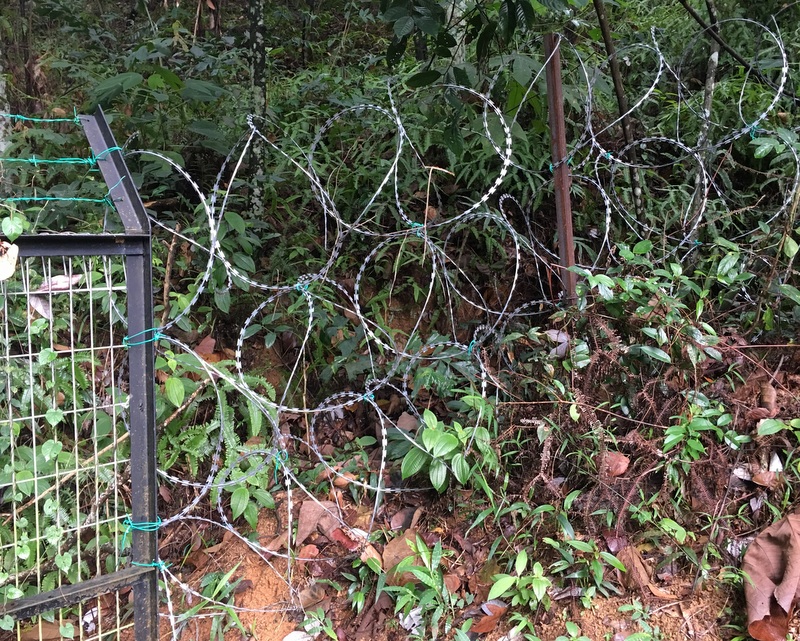 It was a very rewarding experience!

Loke Yew may have been a humble man, but his graveyard is truly monumental!

Note: Both Wikipedia and the blog mentioned above give 9 October 1845 as Loke Yew’s birthdate , but according to the tombstone it is  9 October 1846.