After my visit to Maxwell Hill I stayed a few more days in Taiping. Main reason was to join a THS excursion to the Klian Pau church on Monday 22 May. As I had no car this time, I did a lot of walking. That is no problem in Taiping with its compact town center, where almost everything is within walking distance.

In the evening I walked to the Cross Street Bazar , thinking to have some snack food there, but I was a bit too early. The District Office looked beautiful, without the cars parked in front of it during daytime. 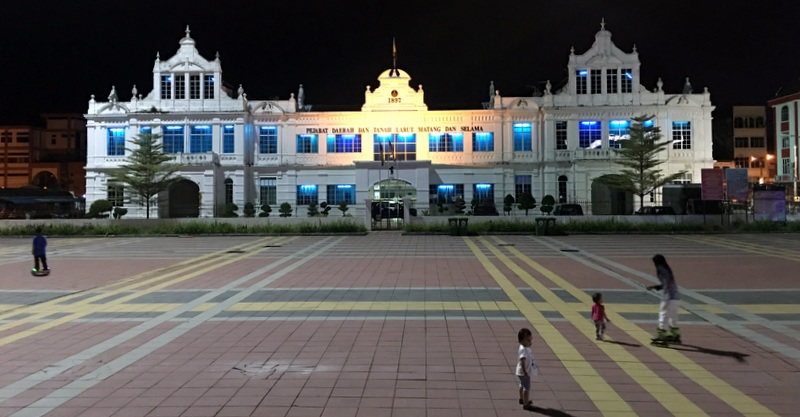 Walking back along Jalan Kota, I noticed that a crowd of people had assembled, apparently waiting for something to happen. Soon floats appeared, it was a temple procession, similar to the Cingay parade in Johor Baru, although on a smaller scale. In JB it is a famous tourist attraction, here even many of my Taiping friends were not aware of the event. Strange.

The next morning I went to a hawker center opposite the Taiping Mall for my breakfast. One of the stalls (no 37) is famous for its chee cheong fun, but at 10 am it was already sold out! I had curry mee instead with coffee, also not bad and cheap too for only RM 4.60. 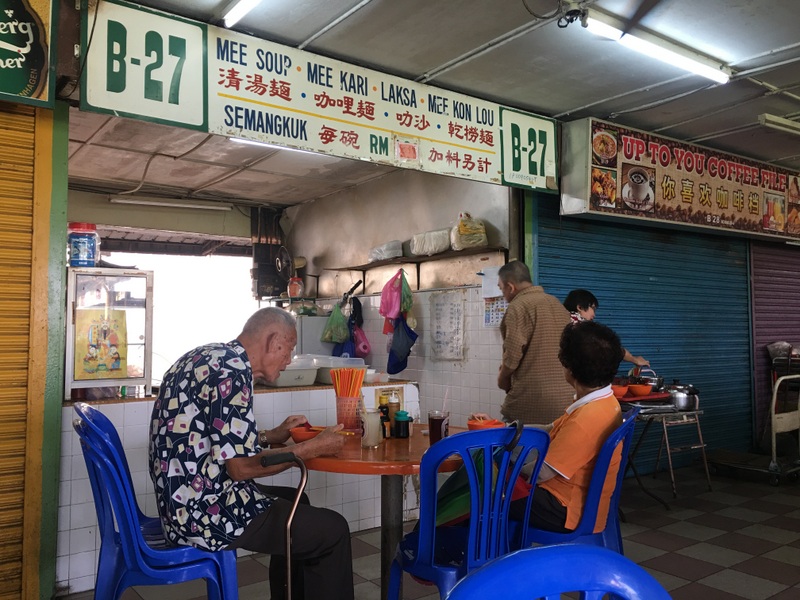 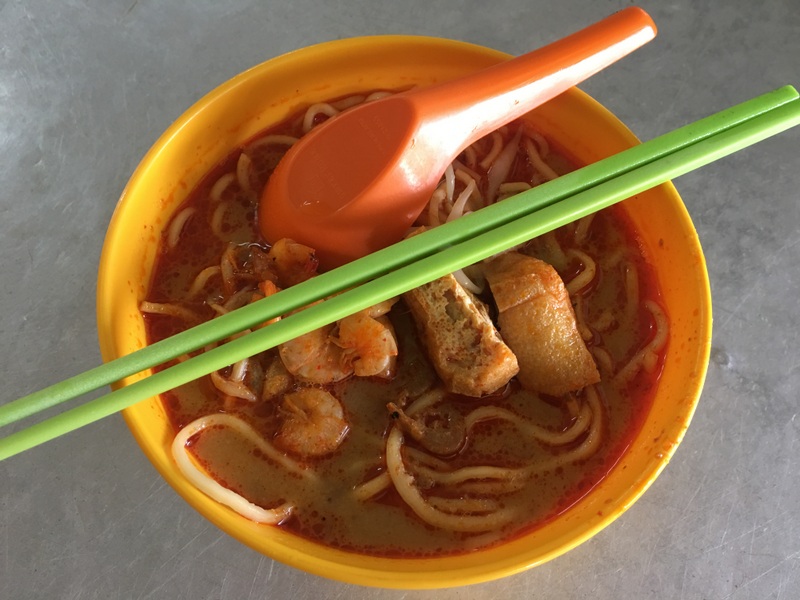 After my breakfast I started my walk through the town, first looking for mural paintings.

The last few years Mural Art has become very trendy in Malaysia. It started in Penang , followed by Ipoh, Kuala Lumpur, Gopeng (he links connect  to blogs I have written about it). Of course Taiping did not want to stay behind. Personally I like the Zacharevic style (Penang, Ipoh) best, where often the specific structure of a wall is used to create the mural. In Taiping (like in KL) the walls are used as a huge “canvas”.

For example this recent one on a wall of the Kwangtung Association behind the district office. Students of the USM Penang were still working on it during my visit. 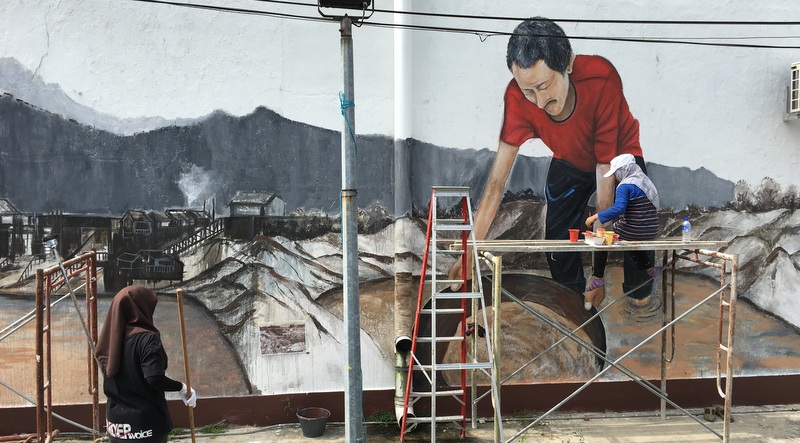 The artworks depict scenes related to Taiping’s past, the tin mining, the first railway, the central market. I have given the approximate location of the murals. Technically well done, but I miss the Zacharevic sense of humor.

Taiping presents itself proudly as Bandar Warisan (Heritage Town). But walking around, I was wondering if it really deserves that name. Too many of the heritage buildings are in a delapidated condition. For example the Town Rest House, one of the many “Firsts” of Taiping. The left picture shows the ruins of the Rest House behind a  wall with a pretentious text on the fence. The right picture shows a description of this “First”, built by the British in 1897 and upgraded to a double-storey brick building in 1894 (six!) 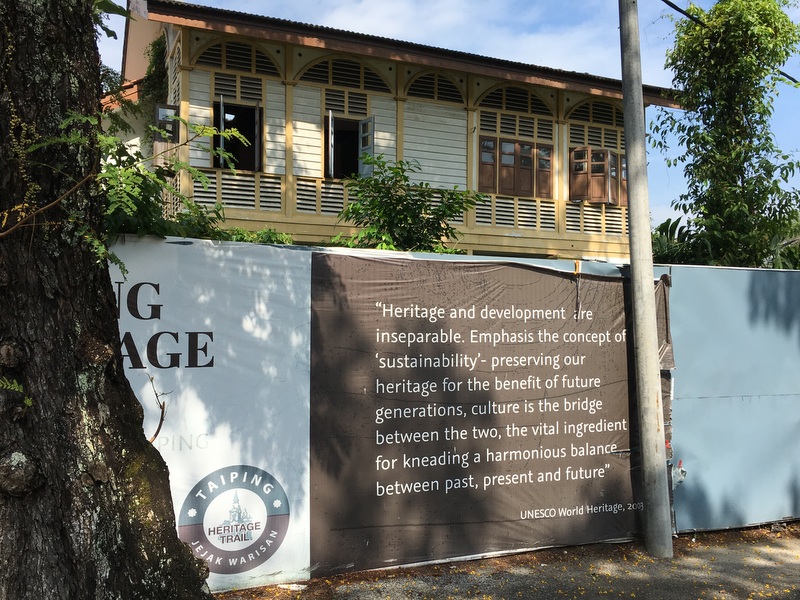 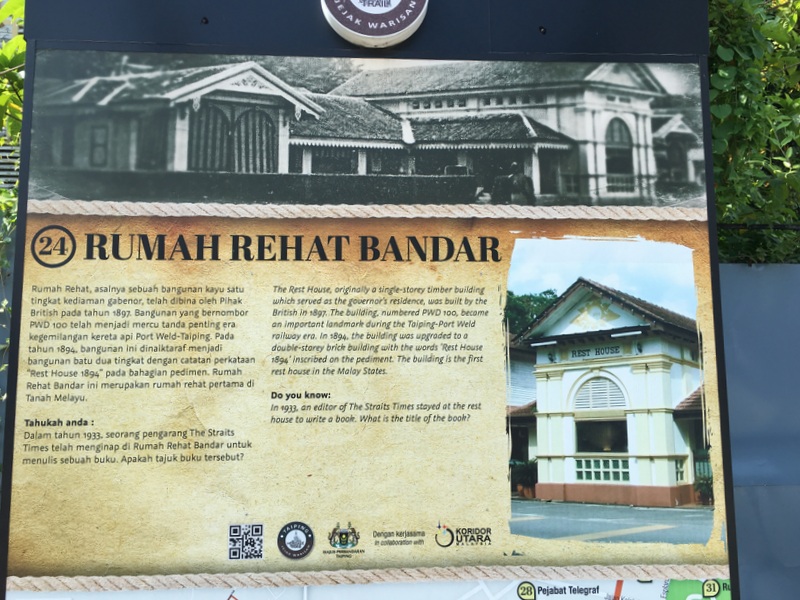 Four years ago I have written a blog “Shame on Taiping” and not much has changed since then. Here a few pictures of the building next to the Rest House. You can enter the building, but AYOR, because squatters live inside.

Of course there are also positive things to say. Look for example at this beautiful facade of Ng Boo Bee”s house at,81, Jalan Kota. Ng Boo Bee was a rich Chinese businessman, who rebuilt almost half of Taiping after the disastrous fire of 1880 and this was his residence. 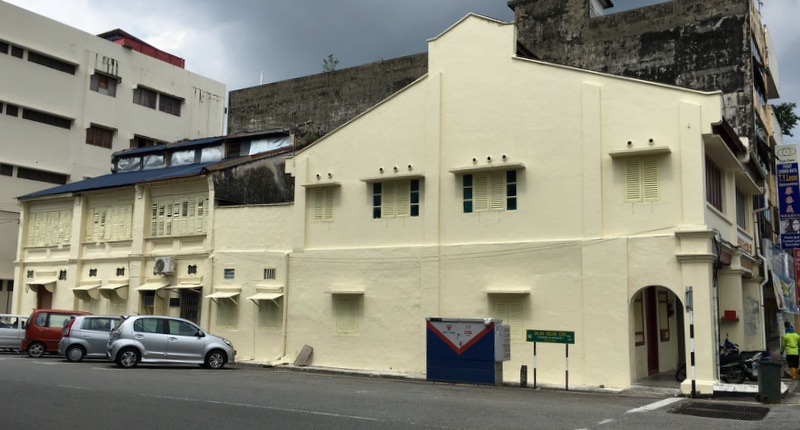 Here are a few more pictures of buildings that drew my attention during my walk. The Peking hotel was built in 1929 as premises for the rubber dealer’s association. It was used by the Japanese Kempeitai during WWII. Now an affordable hotel,  the friendly manager allowed me to have a look at the interior. The Peace hotel (1928) also looks good. 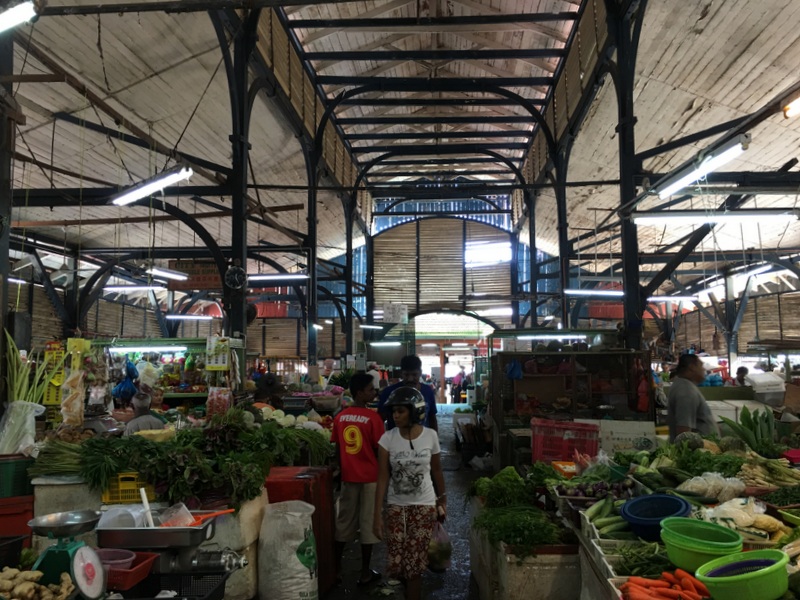 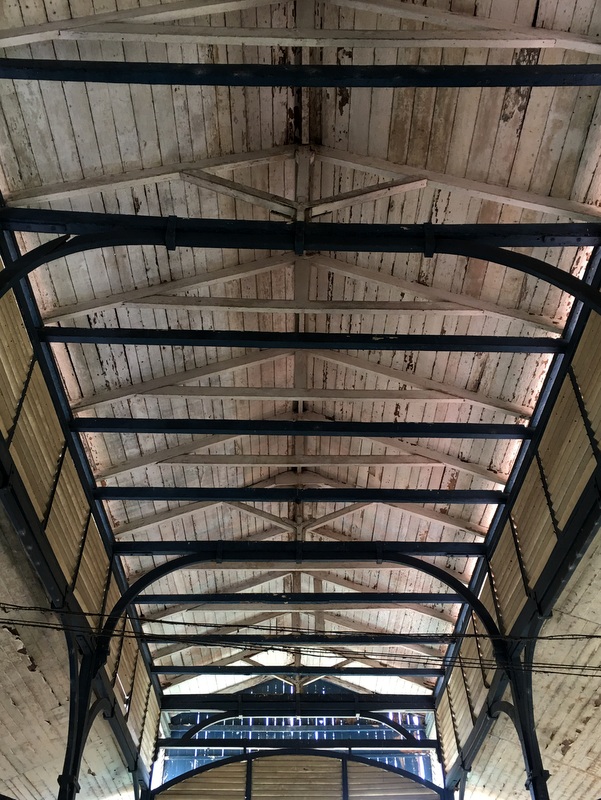 Of course I also spent some time in the Lake Gardens, the most beautiful gardens of Malaysia. During my many visits to Taiping I must have taken hundreds of pictures, it never gets boring.

And I discovered something new! A few Cannonball Trees , easily to be missed, because they are not located near a path, but in the middle of a field. They are native to Central and South America, but have been cultivated in many tropical regions. I had seen them in the Penang Botanical Gardens. Interesting flowers and fruits 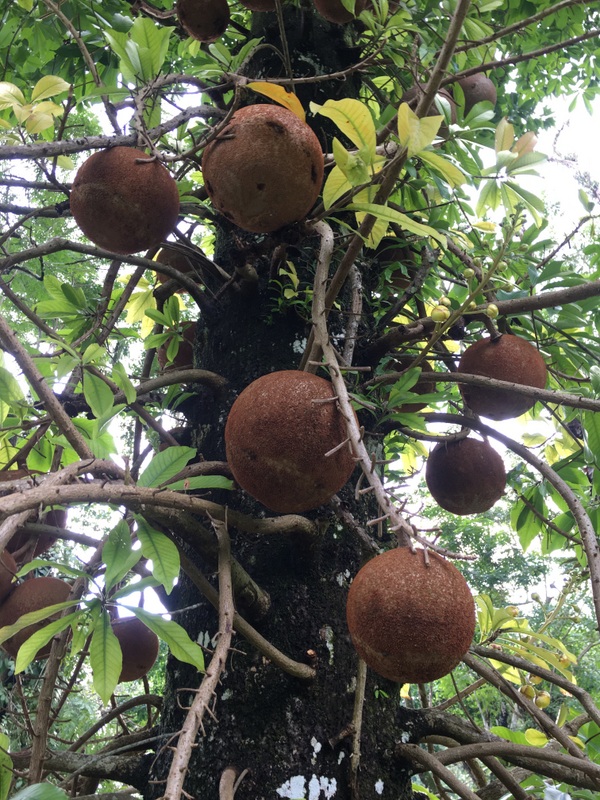 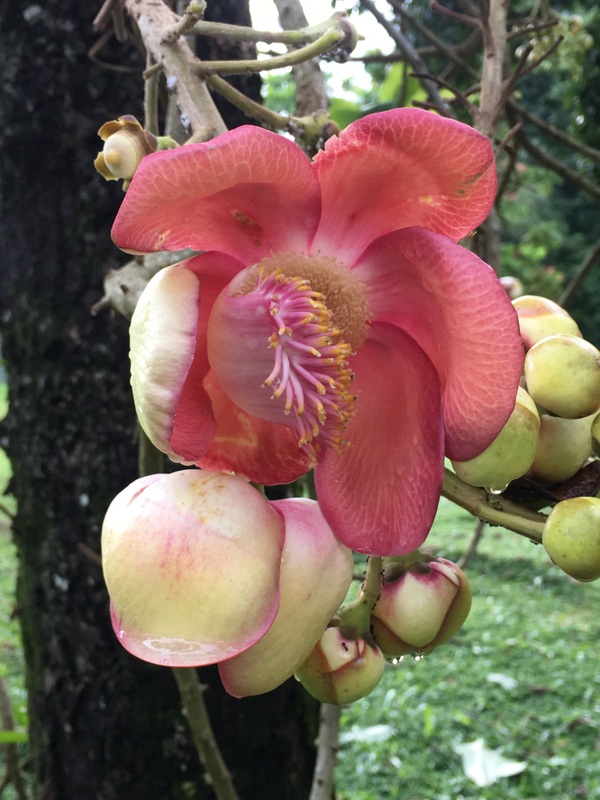 That evening Yeap, the president of THS had invited me for a concert by a Polish accordion player, in the hall of St George’s Institution. It was an interesting performance  of classical pieces, arranged for accordion by Waclav Turek himself. I was very impressed by one of the first pieces he played, Bach’s toccata and fugue in d minor. I recorded a small part of this masterwork, originally written for organ.

The next morning, Yeap picked me up from my hotel for the THS event. The Klian Pau church is the oldest Catholic church in Taiping. Built in 1875 as a simple wooden structure on top of a hill, it was replaced by a stone building at the foot of the same hill in 1884. The official name is Our Lady of the Sacred Heart church.

THS member Rocky explained the history of the church and showed us around.

Telling about the church 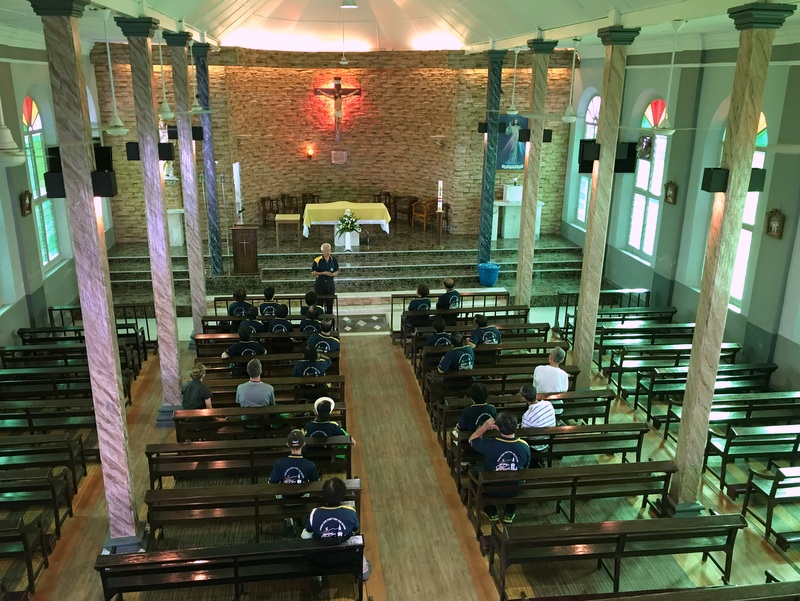 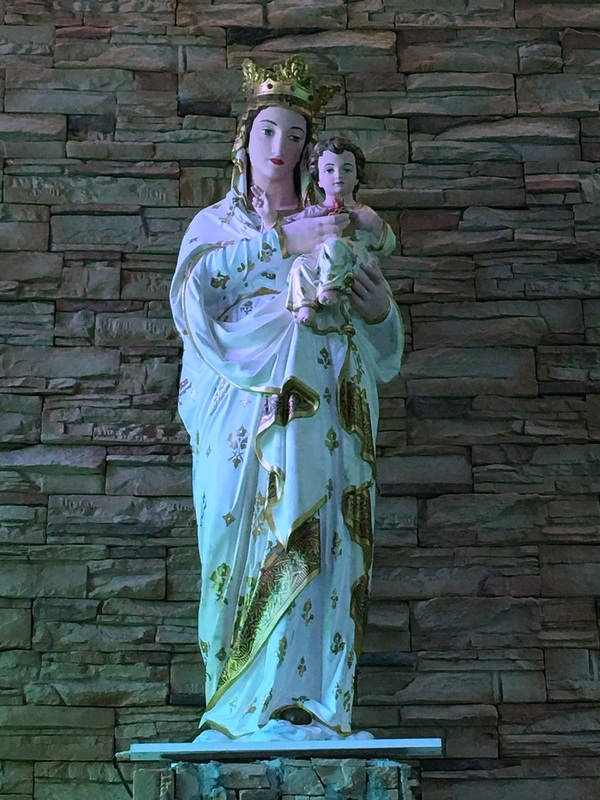 The hill behind the church is called Calvary Hill.  Read more about the interesting story of this hill  here. It was completely overgrown and in preparation for this trip, Yeap and his workers had done a good job to clear the path up the hill. 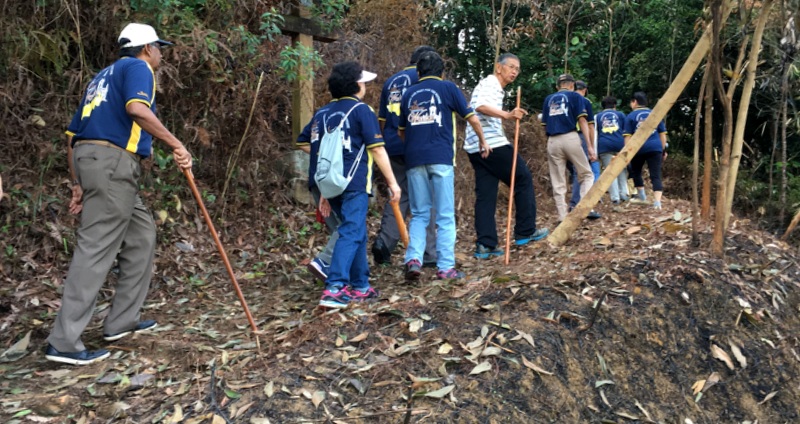 On our way up, we passed several Stations of the Cross.  In the past there may have been a view of Taiping from the top of the hill, but now it was blocked by trees. 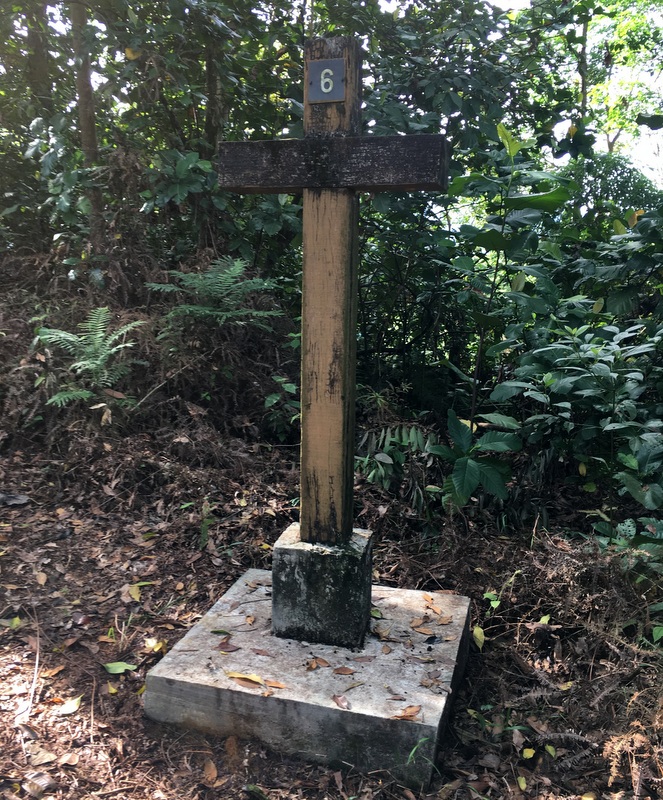 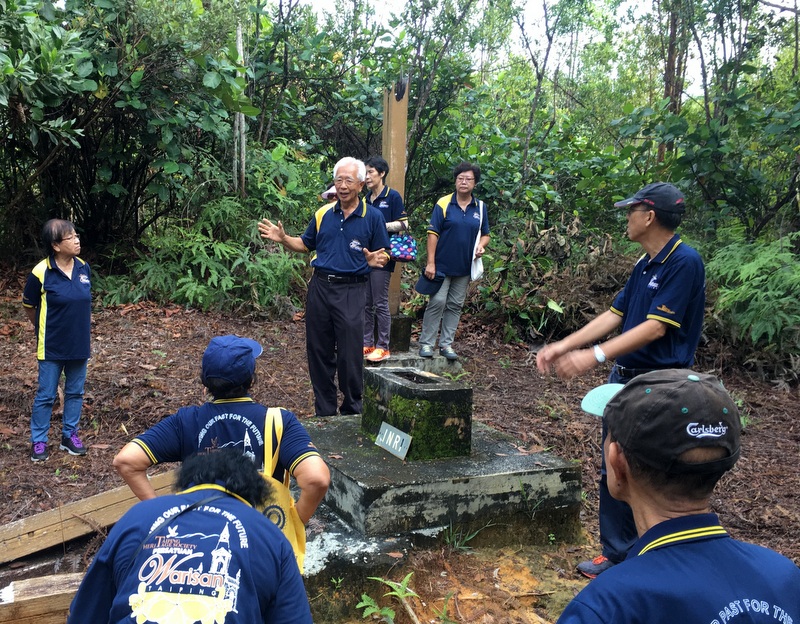 We  also had a look at the nearby cemetery. On the slope of a hill, very Chinese (Feng Shui). Old and new graves next to each other. I was wondering if it was possible to get more information about the old grave of J. Mc.Namara, who died 18 June 1894. Surprisingly I found a reference in The Chronicle and Directory of China Etc. 1892 ! He was an Inspector Second Class in the First Battalion, Perak Sikhs, stationed at Batang Padang. His commander?  R.S.F Walker, whose statue can be found at the Perak Museum.

After a brunch in front of the church, we went back to Taiping and visited the Shun Tak Association, one of the successful restoration projects in Taiping. There is a cafe  inside, where we had lunch. The rest of the day I was lazy, only went out for Hainanese Chicken Chop in Yut Sun with friends and had coffee with Wan Amril in the Greenhouse. Next morning roti canai in the hawker center near my hotel. Food is one of the attractions of Taiping…:-)

We had lunch there

After my breakfast I decided to try the Heritage Bus, a new initiative. According to my map, there should be a bus stop opposite the Taiping Mall. Asking around, nobody knew about it, they directed me to the starting point, near the Peace Hotel. There I found a shabby waiting area and an ultra-modern bus. I paid one Ringgit and entered the bus, with a few more locals. After about half an hour we were back, we had done the Heritage Trail, without any information or explanation. Completely useless, but nice air-con in the bus. Simple changes could make it a lot better.

In the afternoon, with friends who had arrived from KL, I visited the Antong coffee mill. We had a look at the mill, where they were roasting the coffee, and tasted a few varieties of coffee. 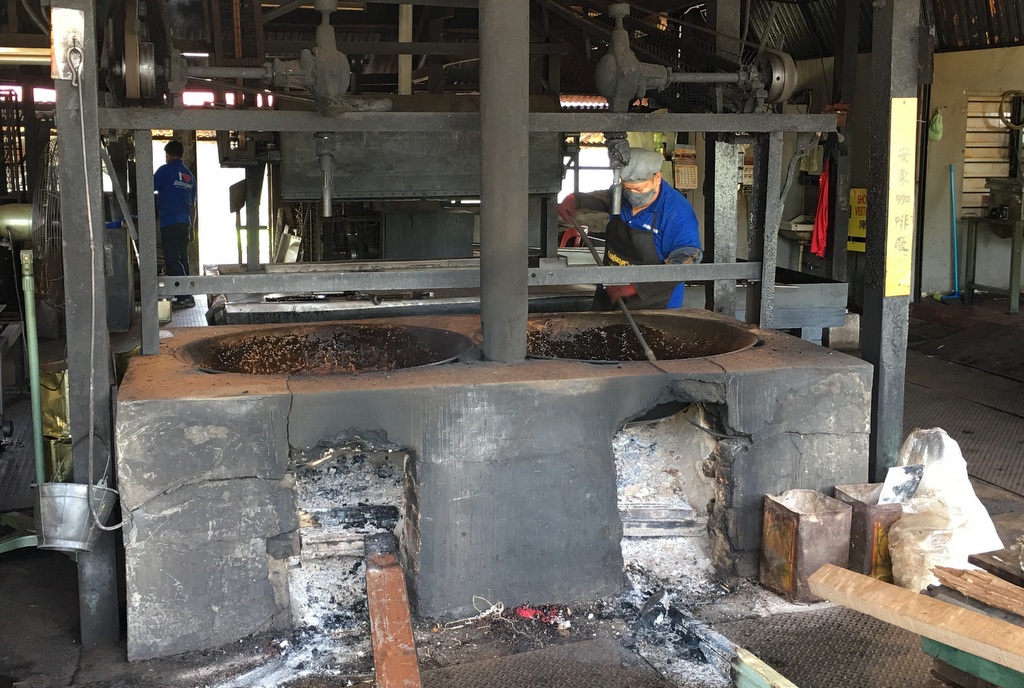 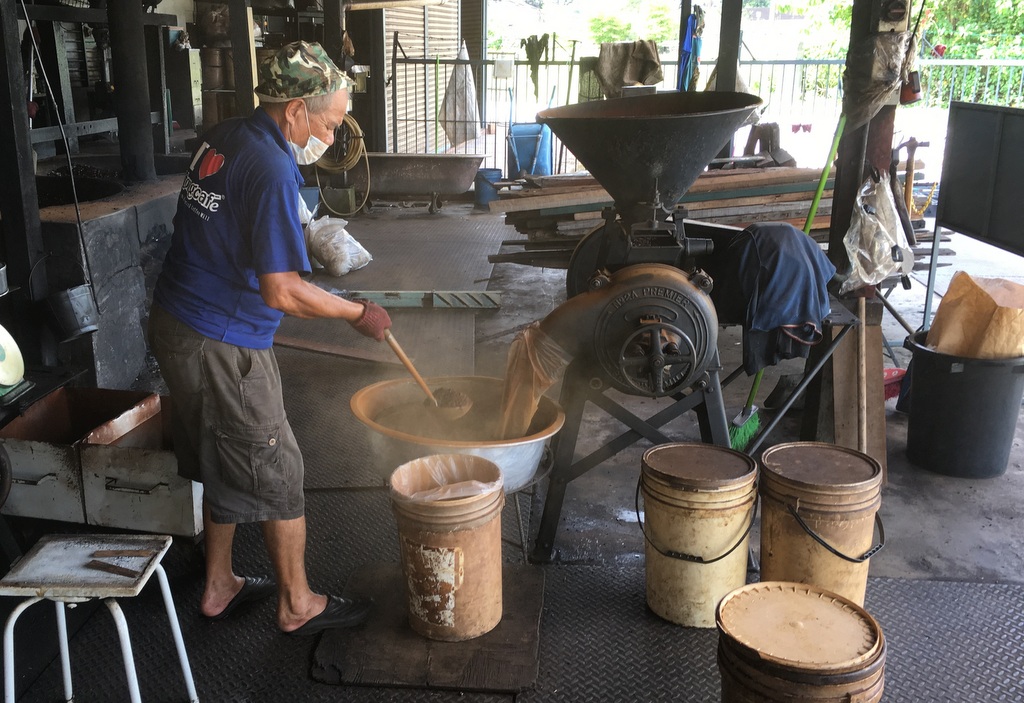 Located on the Antong grounds is a nice house, where in the beginning of the 20th century Sun Yat Sen’s mistress has been living.

I had visited the Coffee mill and the Sun Yat Sen house earlier, but I was interested to see a recent mural near the factory. Again large-scale, 100 meter long, maybe it will be included in the Malaysian Book of Records as the Longest Heritage Street Mural. But will it become a tourist attraction, as suggested by the TTA (Taiping Tourist Association)? I have my doubts. 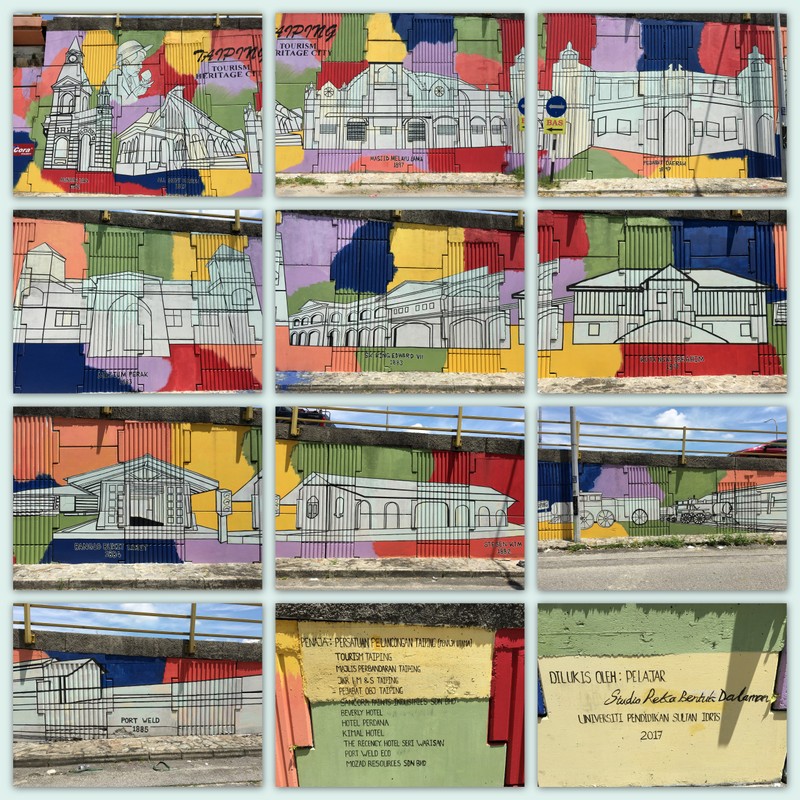 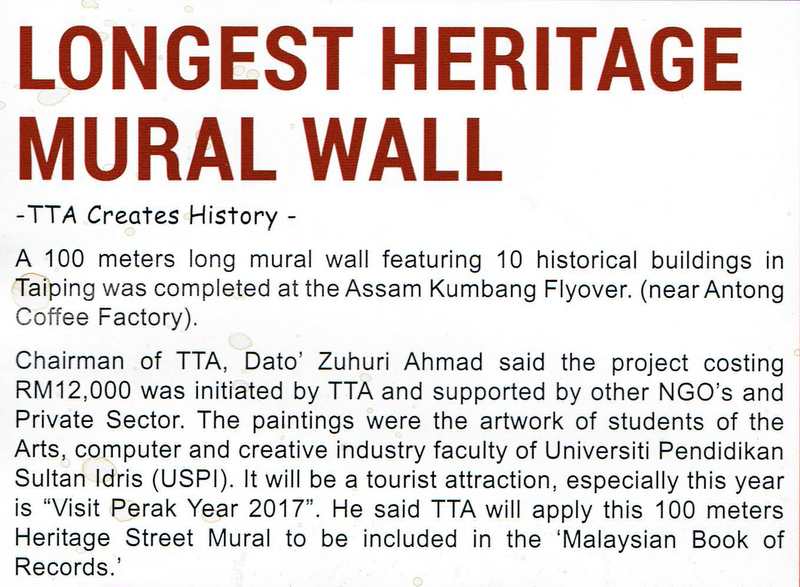 The last night in Taiping we stayed in Flemington, where we enjoyed the rooftop swimming pool and the nice view of the Lake Gardens. 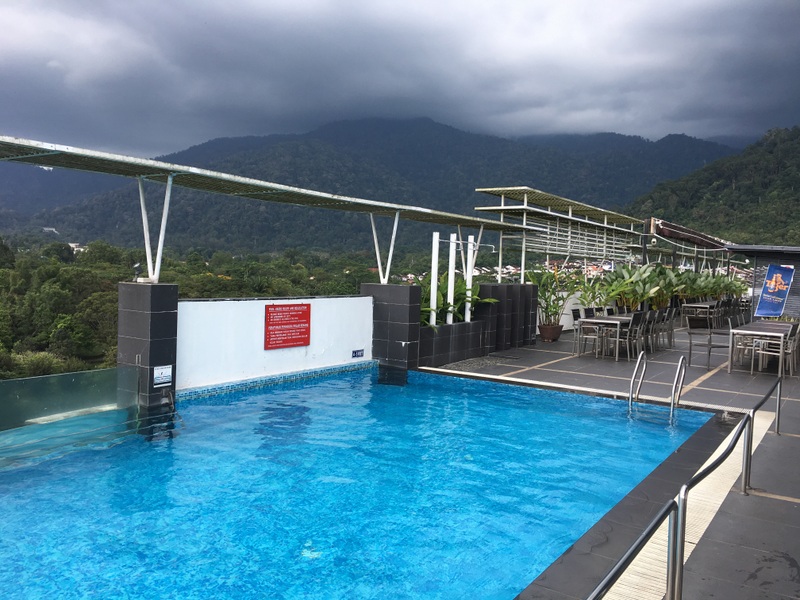 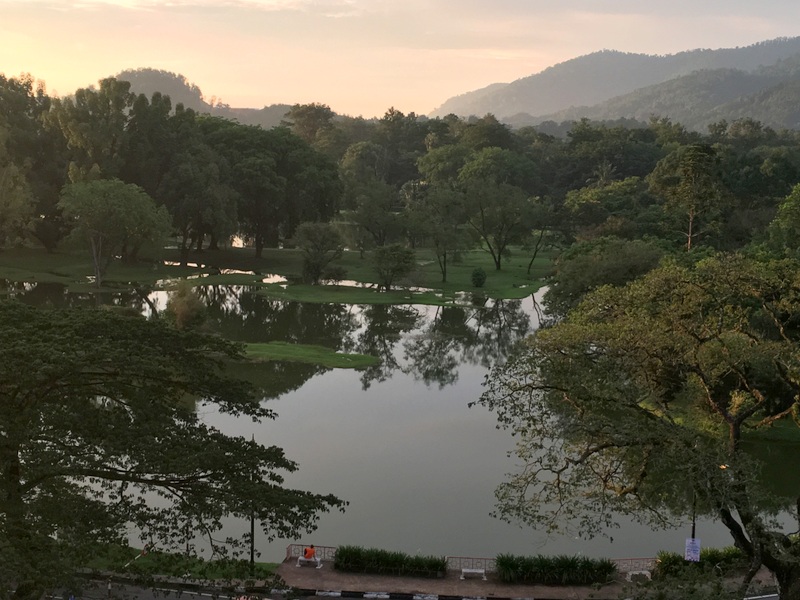 A Taiping visit, as usual full of variety…:-)