In my last Journal I mentioned an unsuccessful hike to a remote waterfall, where we went back because I felt “discomfort”. After my cardiologist had given me a clean bill of health, of course I wanted to go back and give this Batangsi waterfall another try..:-) This time with Aric, Edwin, Janine, Nick and Siang Hui as our guide. We met at Sg Long for breakfast, after which we bought our lunch at the lively pasar pagi.

And a plant for our balcony

Before I start the report about our hike, it may be useful to explain first why we are so interested in the mysterious Batangsi waterfall…:-) Here is a Google Map of the region (click to enlarge). At the top you see part of the Semenyih reservoir. The green marker gives the location of the well-known Nirwana Memorial Park and to the right you see the border between Selangor and Negeri Sembilan. And in the middle of nowhere there is a marker for the Batangsi Falls!

Could there really be a waterfall there, or is it just a mistake of the map maker? On the topo map of the region there is no mention of a waterfall. 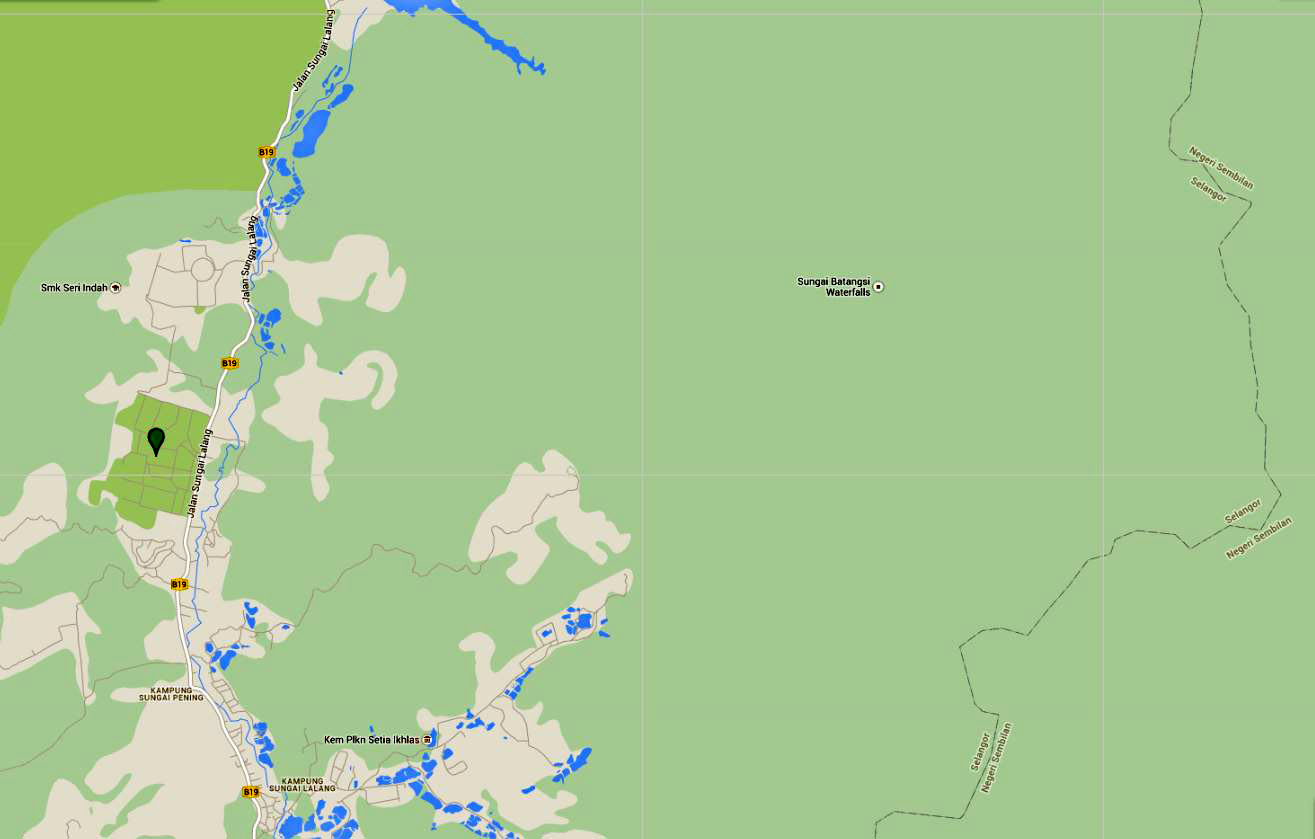 Intrigued by this mysterious fall, we have been exploring the region several times during the last ten (!) years. We found the Batangsi river with a few cascades and small waterfalls. It resulted in a webpage Batangsi Fall on my Waterfalls of Malaysia website. Here are two of the small waterfalls/cascades we found. 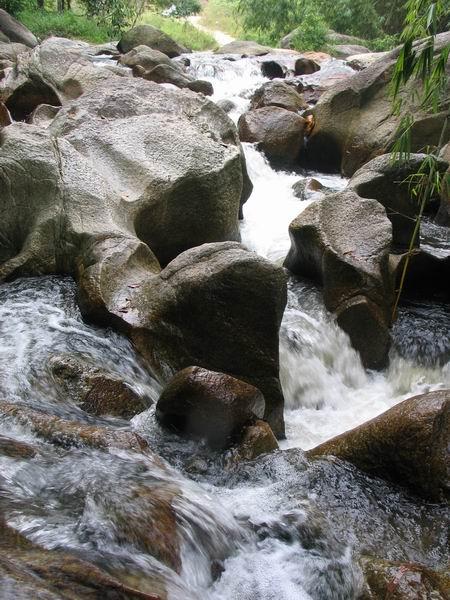 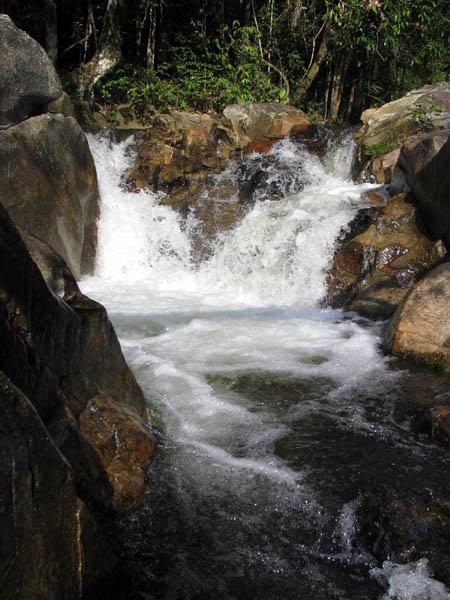 Were there more waterfalls upstream? In 2008 I joined Aurelius and his friends, we followed a farm road until the end. From there we river trekked upstream for about three hours. Nice hike but no waterfalls.

Here is a Google Map with our hike. Black is the farm road, blue the river trekking. 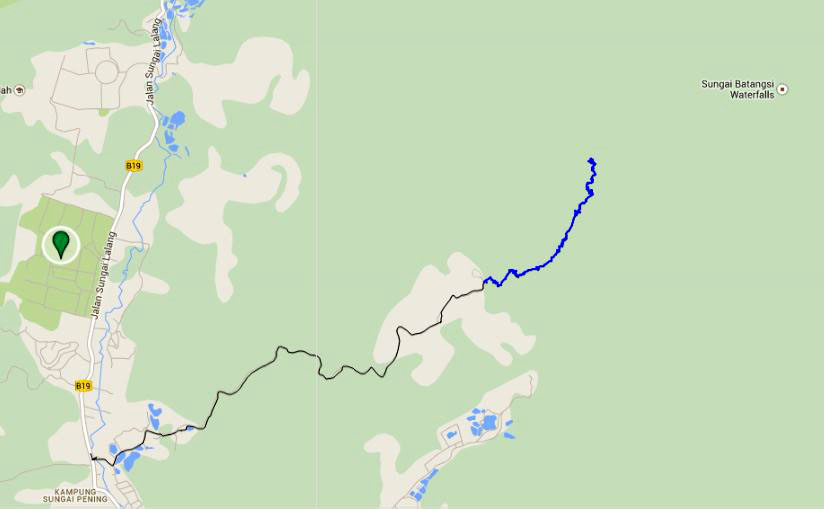 In 2012 Siang Hui and Harry (†) did another hike, following the river much further. Coming to a split in the river, they decided to follow the right branch and finally found a real waterfall…:-) 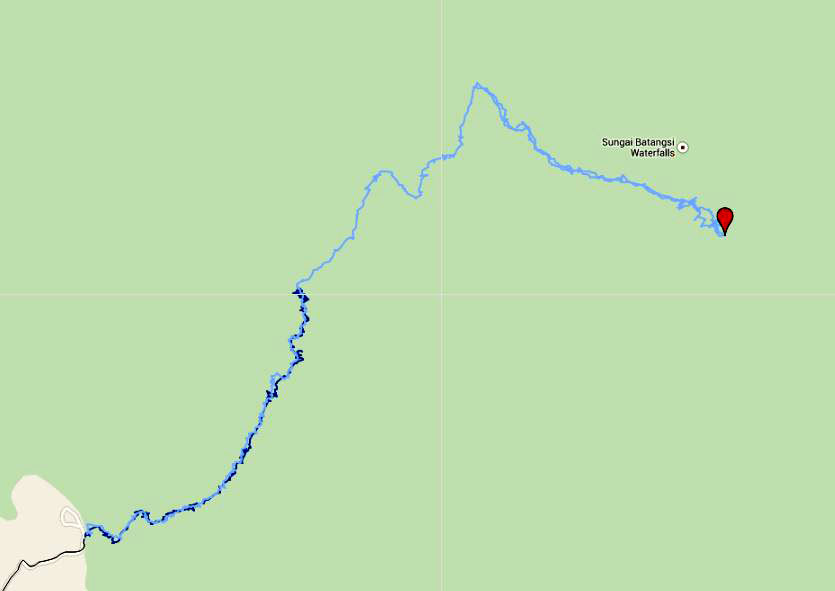 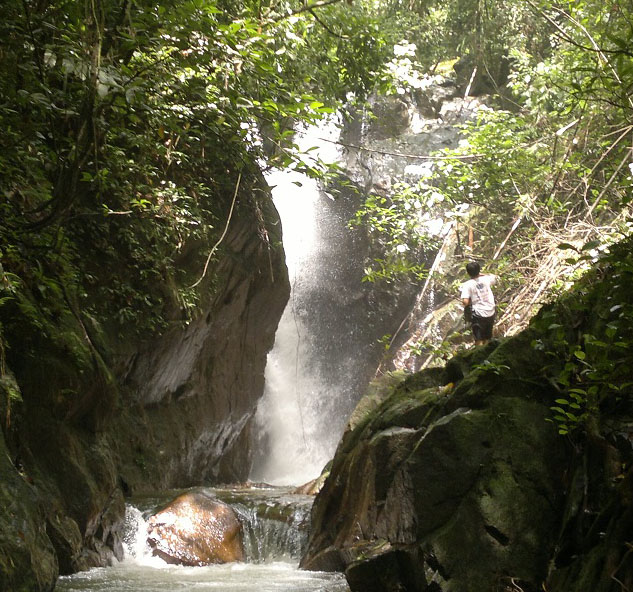 During this hike they had come to a split of the Batangsi river and decided to follow the right branch. Could there be another waterfall in the left branch? Studying the contour lines of the topo maps, Siang Hui thought there might be one.

When you look at the first map picture in this blog, you will notice that there are two farm roads leading inland and for our next recce we took the other one. It ends at a temple, from where a clear trail starts. Unfortunately I did not feel well after about one hour hiking , so we turned back. Here is a Google Maps screenshot. The possible waterfall is marked with a red star. 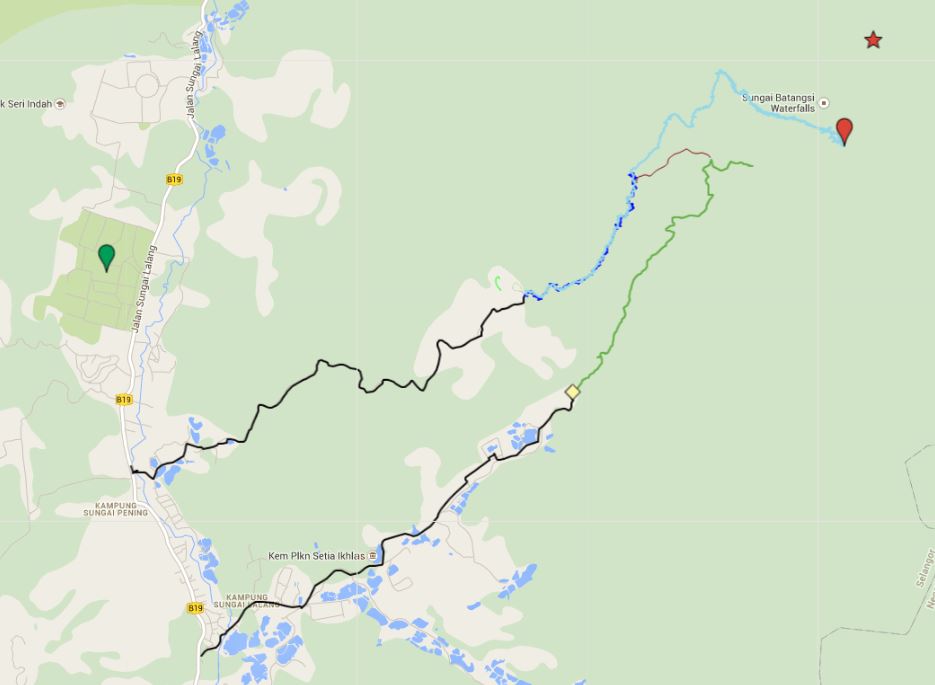 The yellow marker indicates the location of the temple. As you see our hike (green track) brings us quite deep into the interior! On our way back we went down to the river for a bath (brown line)

After this “longish” introduction, here is the report about our latest hike. Again we followed the farmroad, passing flower and vegetable farms, until we reached the impressive Buddhist temple.

View of the valley from the temple

We started our hike from the temple at 9:15 am and were back at 5pm. It was an interesting, tough hike, but we did not reach the waterfall! However, we have now a clear idea how to proceed on our next, and hopefully final hike…:-). Here is our hike (in green) on Google Earth, only the main part is shown  (click to enlarge) and I have numbered a few points of interest. The coloring is a bit different, dark blue is my trip with Aurelius, light blue the hike of Siang Hui and Harry and red our aborted hike. 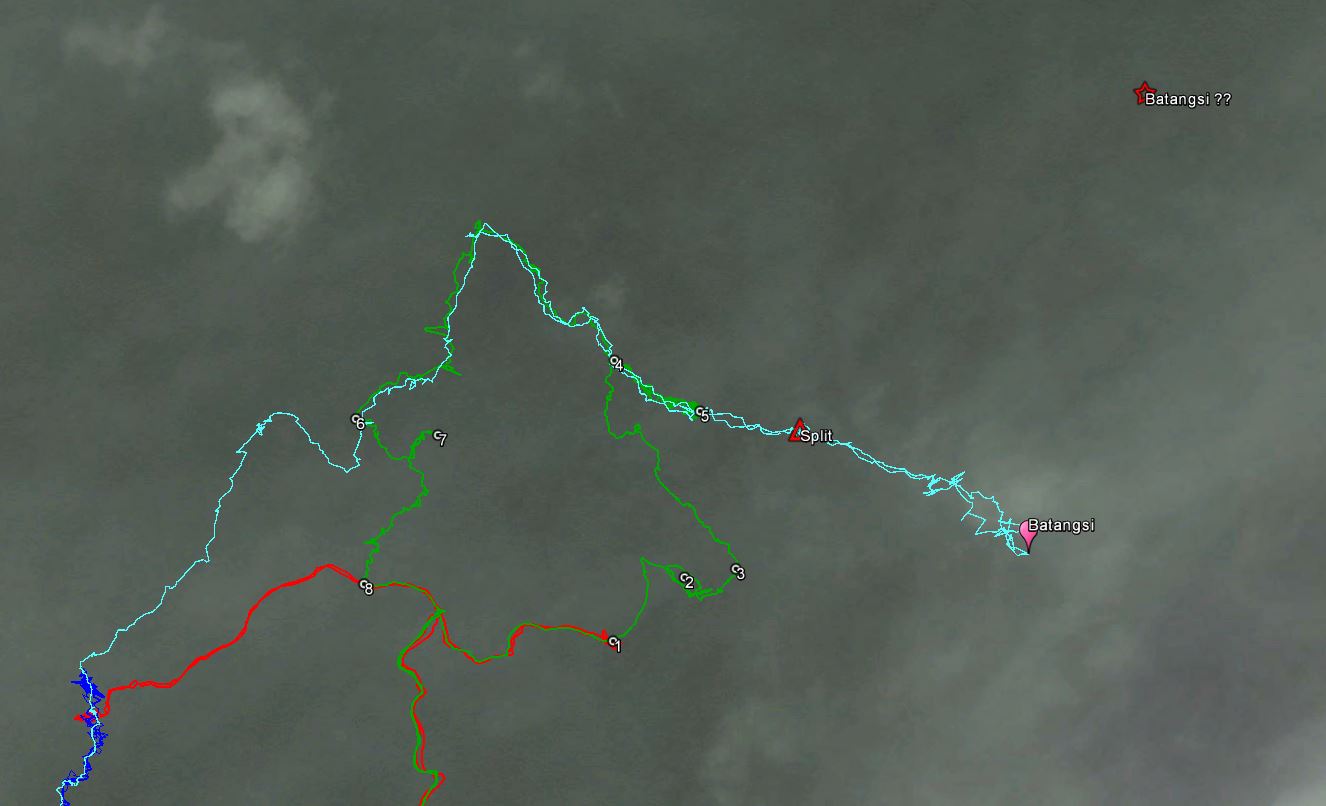 From the temple it took us about one hour plus to reach point (1) where I went back during our last recce. Until there the trail was well kept so we were expecting that from there it would continue. But after another half hour hiking, the trail disappeared (2). We backtracked  to see if we had missed the trail, but it was really gone.

Start of our hike

People have been here before

From that point Saing Hui had to do a lot of chopping. After a while we reached a small stream (3) and we decided to follow it back to the Batangsi river. In retrospect that was a mistake, as we were only about 400 meter away from the river split we wanted to reach. After we reached the river (4), we trekked upstream to a small waterfall where we had lunch and a bath (5).

We reach the small stream

Are you sure, Nick?

It was already getting late and we decided not to continue, but river trek back. River trekking is fun, but also slow, so when we reached a run-down biker camp (6) near the river, with a trail going uphill, we decided to take that trail.

Time for a picture

Climbing up the slope

Also here we lost the trail and it took us quite a long time, after even going in a completely wrong direction (7) for a while, to reach the logging road (8)!

We were very lucky with the weather during this trip. It was only a few hundred meters before reaching the temple that a downpour started. And a real downpour it was…:-)

Back to the road!

Getting lost with three GPS!

Back at the temple

Siang Hui and Nick had to go back home early, so it was only the four of us who could enjoy a delicious seafood dinner in Semenyih.

A memorable trip. We are thinking about a (hopefully) final attempt. After reaching the small stream (3) not following it but chopping our way to the confluence. From there river trekking. Then basically the same way back. The black line in the map below. 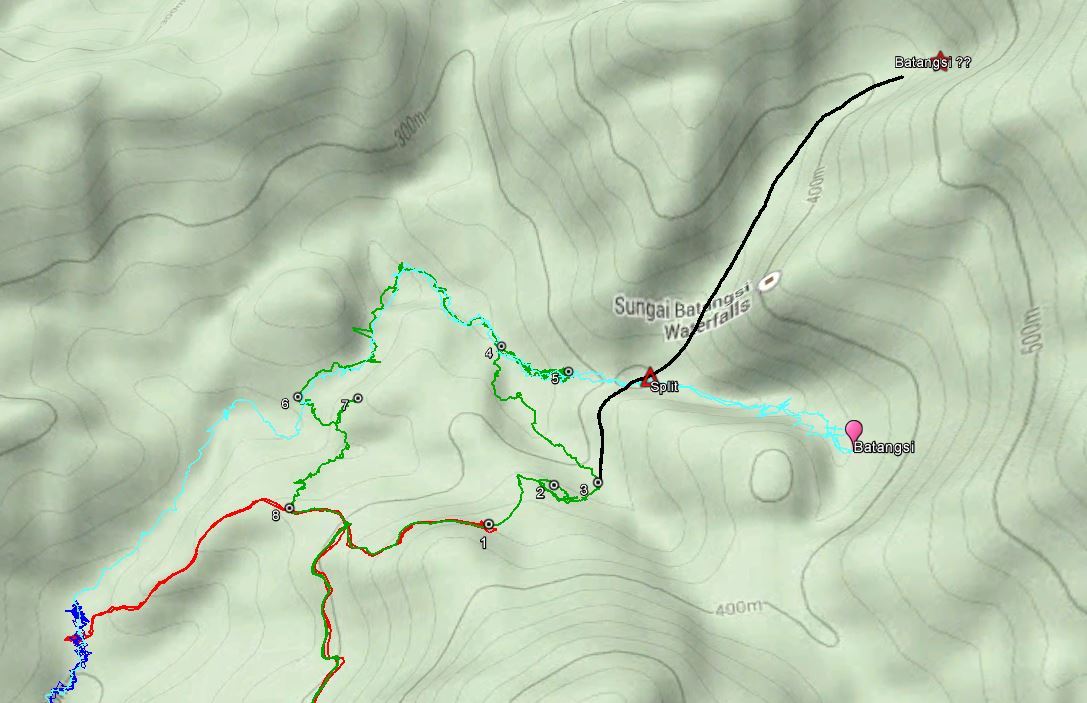