Usually I come back to the Netherlands when spring has started, but this time I was earlier. The weather was cold and grey, not inviting to go out and enjoy the countryside. Maybe visit a museum?  But which one, Amsterdam has more than 50 of them! Two of them are housed in patrician canal mansions and I decided to visit those.

The famous Grachtengordel (“Canal Belt”) of Amsterdam, clearly visible in the GE map below, has been declared an Unesco World Heritage site in 2010. The three concentric canals were dug in te 17th century, the Dutch Golden Age 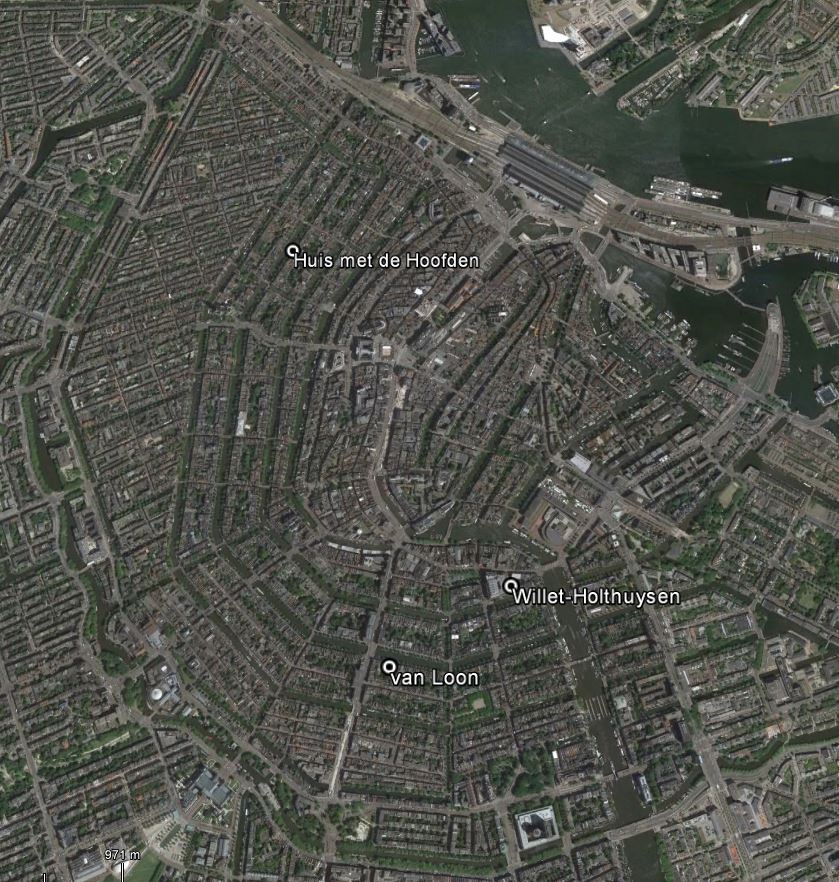 First I visited the museum van Loon. This merchant mansion was built in 1671, has had many tenants  (for example the painter Ferdinand Bol, a pupil of Rembrandt)  and owners and was finally bought in 1884 by the aristocratic family van Loon, who still owns it, but doesn’t live there anymore. 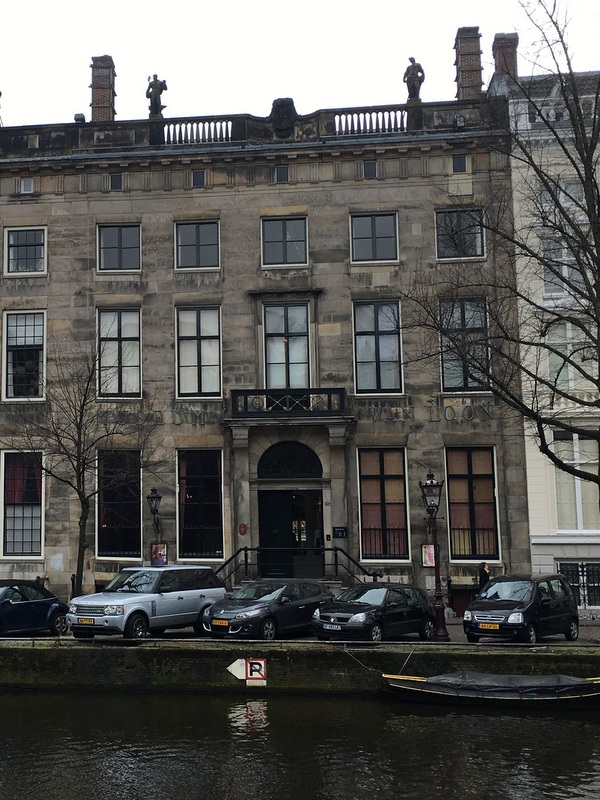 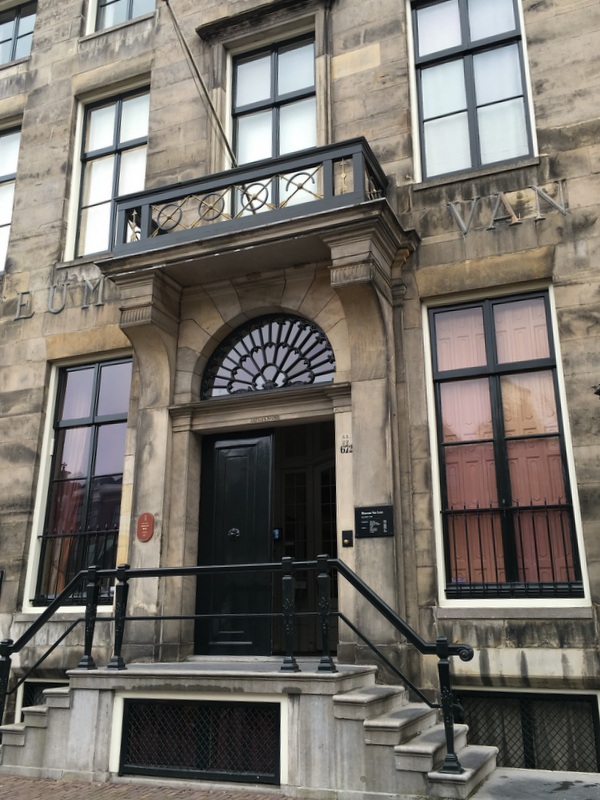 Here is a collection of pictures. These mansions have a big garden, with at the back the coach house. The kitchen is in the basement, the (elevated) ground floor has reception and living rooms, the first floor the bedrooms. The second floor (not accessible nowadays) contained the servant quarters. The museum gives a good impression how the rich merchants lived in those days.

In the coach house

During my visit there was an interesting special exhibition. The van Loon family belonged to the Dutch aristocracy and many exhibits show their personal fashion style, from 1850 until present.

My second visit was to the Willet-Holthuysen museum. Built for Jacob Hop, mayor of Amsterdam, around 1685. Also here many owners, the last one was Mrs. Willet-Holthuysen, she bequeathed the entire house to the city of Amsterdam on condition that it became a museum in 1895.

Similar design as the van Loon mansion. Elevated ground floor with diningroom and sitting room and a large ballroom. Kitchen in the basement, with access to a town garden. Bedrooms on the first floor. Notice how the 17th century building is flanked by ugly modern buildings 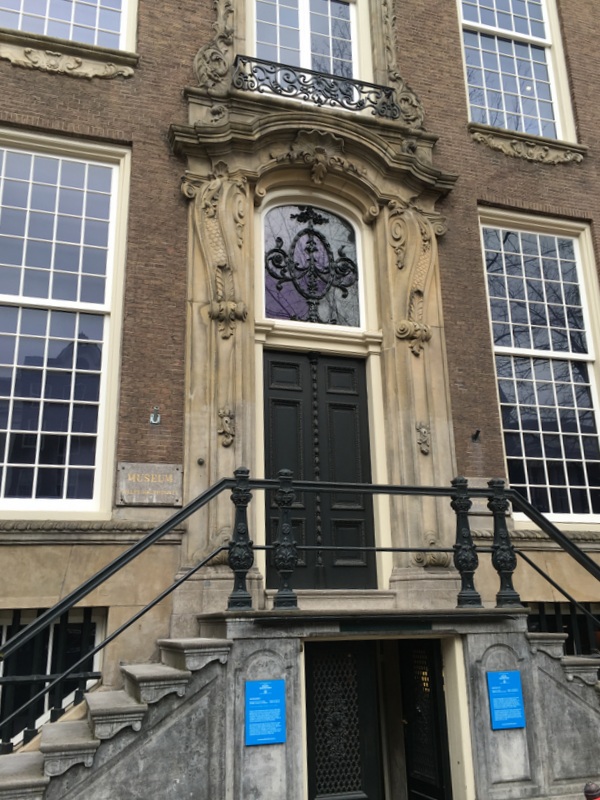 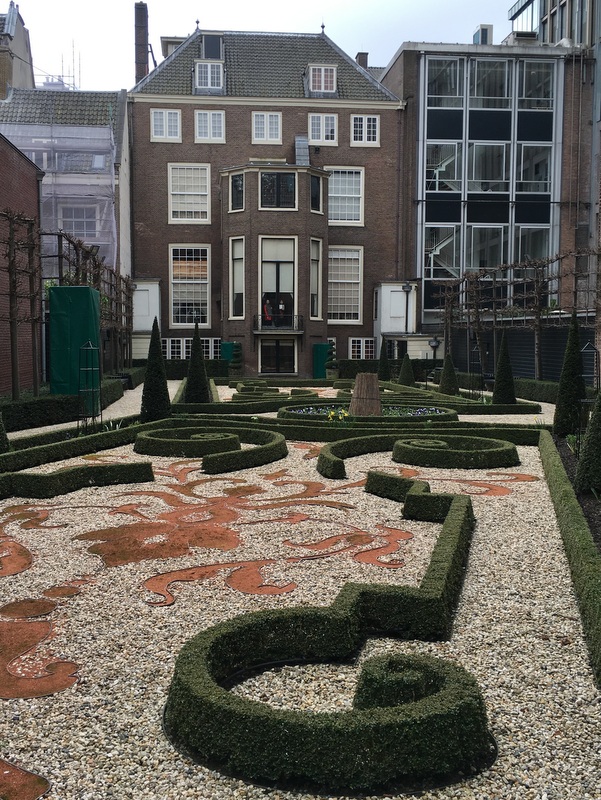 Also for this museum a collection of pictures. The Willet-Holthuysen couple were part of what you would call nowadays the jetset. Traveling a lot, giving parties, collecting art.

View of the garden

When I was searching the Internet for opening times etc, I found that there used to be another townhouse museum, the Geelvinck-Hinlopen mansion, unfortunately closed indefinitely last year. But the regular concerts of classical music, given in this museum, arestill being organised, only in a different location, in the Huis met de Hoofden (House with the Heads). This mansion was built in 1622. The interior is under renovation, only one room is accessible for concerts. Impressive facade.

There is a legend that the six heads represent thieves, beheaded by a servant, when she noticed a burglary. Not true, they represent Greek gods…:-)

the House with the Heads

Some of the heads

It was my lucky day, there was a concert on this grey Sunday afternoon! Musica Batavia , three musicians, on harpsichord, violin and recorder, were playing music by Bach, Telemann, Vivaldi and others.

Waiting for the musicians

They played very well, here is an example of their musical style, a sonata by Pietro Locatelli (an Italian composer who, by the way, lived most of his life in a canal house in Amsterdam!)

I really enjoyed this Grey Sunday in Amsterdam!

3 thoughts on “A Grey Sunday in Amsterdam”