When I am back in the Netherlands, my friend Inez and I always try to organise an outing. Last year for example, we visited Rotterdam and Dordrecht.This time we decided to stay in Amsterdam,  and visit some new and/or interesting architecture. It was a beautiful sunny spring day.

Our first destination was the new Westermoskee, the largest mosque of the Netherlands, with a floor surface of 800 m² and a capacity of 1700 people. The plan to build this mosque dates back to 1997, there have been numerous problems, now it is almost complete, the unofficial opening took place on 1-4-2016.

I was impressed by the architecture, based on the Hagia  Sophia in Istanbul, but in a very “Dutch”, brick-based style. It blends very well in the surrounding residential area.

Personally I am really proud of my multicultural hometown, that it has been possible to build this Islamic icon in a “Western/Christian” environment.  The opposite might not be easy these days..:-(. Here is a report by Al Jazeera about the mosque.

From the mosque it was not far to a former tram depot, built in 1902, and recently transformed in a cultural center with a cinema, library etc. Also many food outlets. It has been renamed De Hallen .

After lunch we went to the Western harbours. where we had a look at the REM island . In 1964 commercial radio and TV was not yet allowed in the Netherlands. A group of businessmen found a solution: broadcast from an artificial island, just outside the Dutch territorial waters!

Unfortunately for them, the experiment lasted only a few months, because the Dutch parliament quickly passed a law, extending the territorial waters…:-). The navy raided the place and confiscated the equipment.

The platform remained for many years where it was, off the coast at Noordwijk, but a few years ago it has been moved to the Western harbour where it now has a second life as a restaurant!

The harbour view from the upper deck is of course impressive. Windy too..:-)

Our next stop was the Spaarndammerbuurt. Here one of the jewels of the Amsterdam School of architecture can be found. This expressionist style of architecture peaked in the first quarter of the 20st century.

Google Earth has a 3D option and in the left picture you see the Ship in 3D. In the right picture the iconic (although useless) tower of this housing estate for workers! 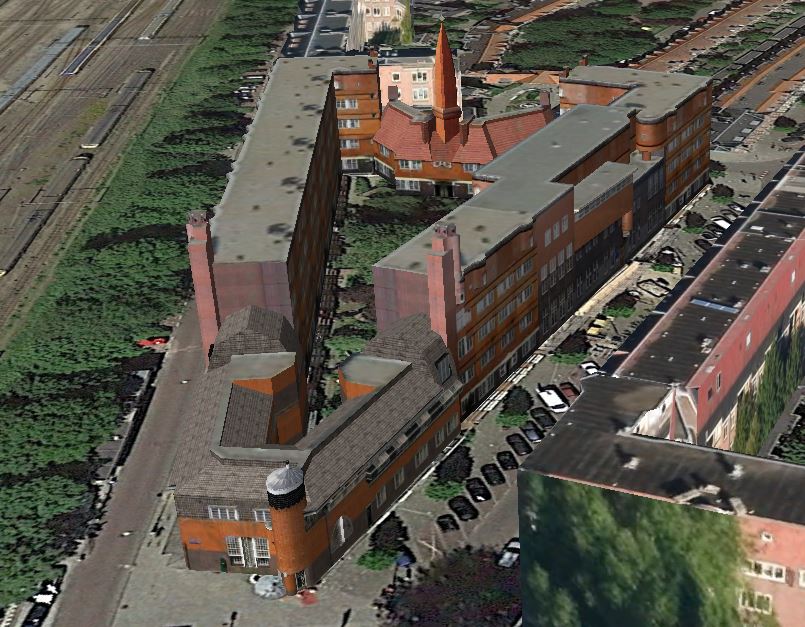 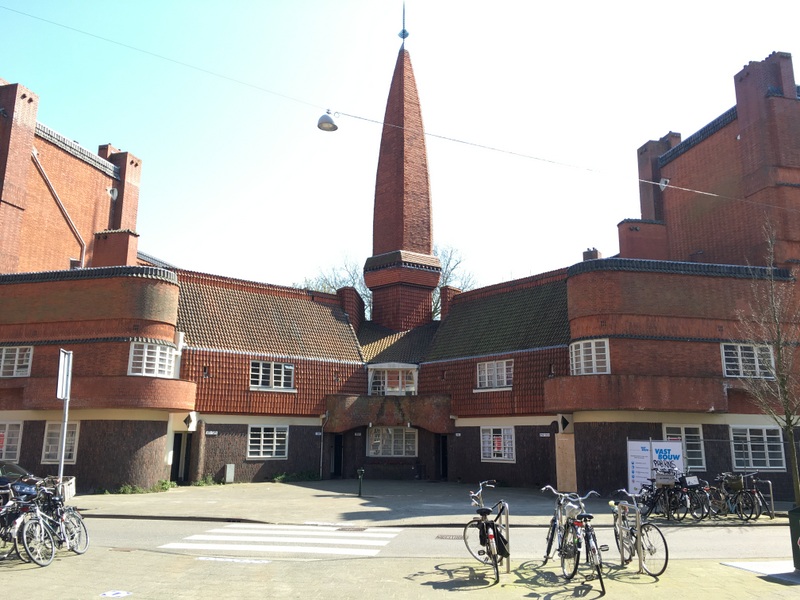 The rounded forms are characteristic for the Amsterdamse School. The former postoffice now houses a small museum.

Last destination for the day was the new development of the IJdock. At the west side of the Central Station, an artificial island has been constructed, as can be seen in the two images below. Left the situation in 2006 ,  right an image from 2015. 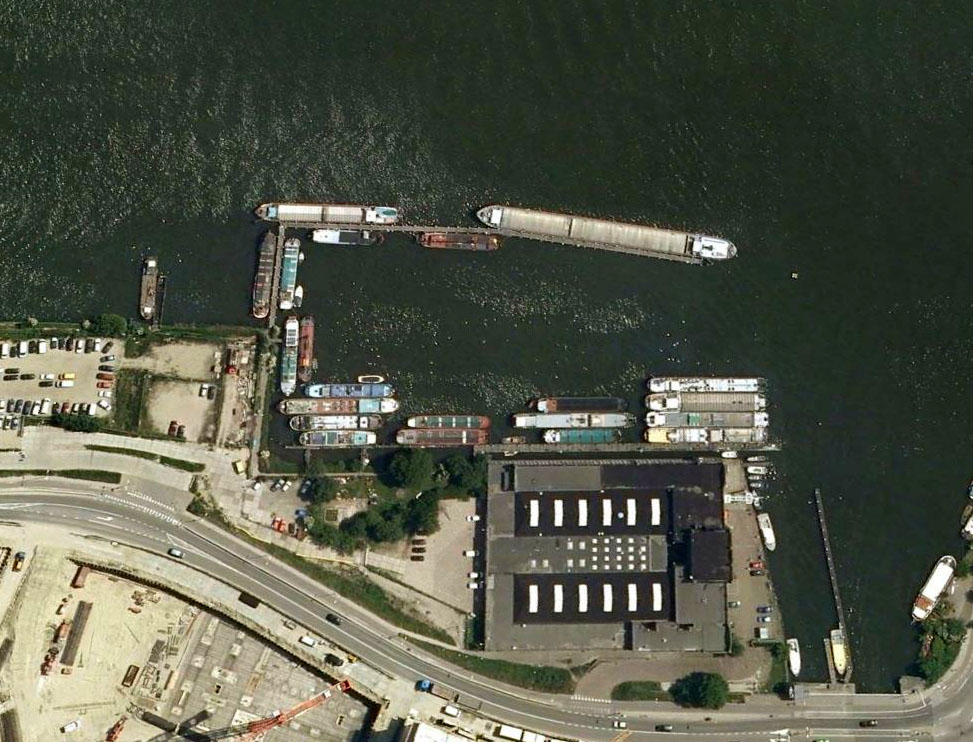 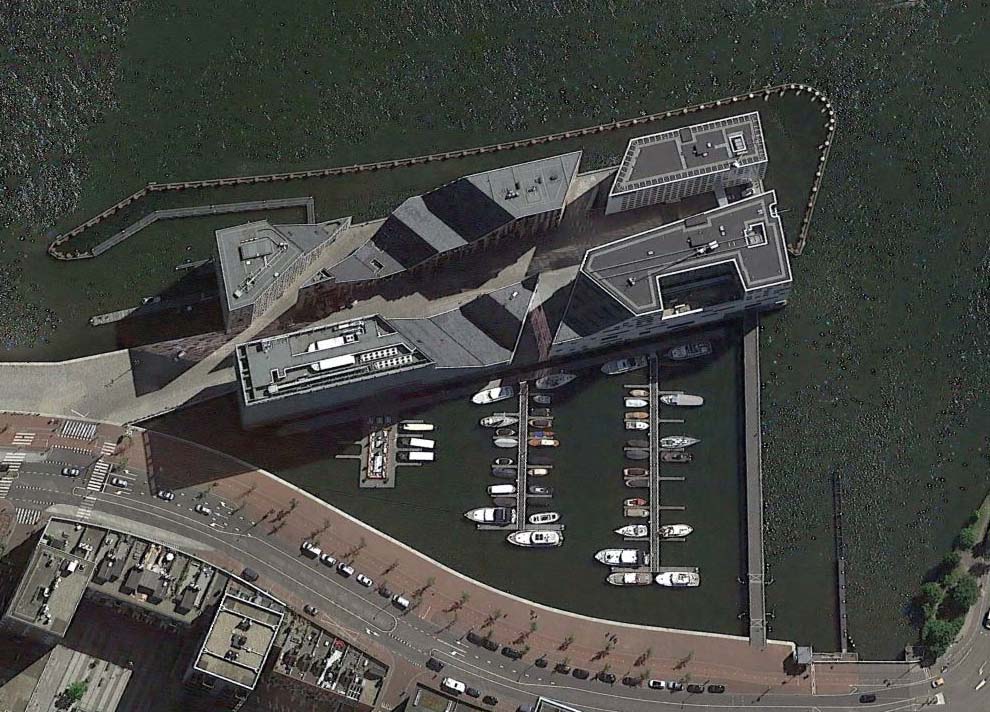 How to live here?

That was enough for a day trip. The next day I visited another highlight of the Amsterdam School, the social housing complex De Dageraad, built by Michel de Klerk and Piet Kramer in 1920. Here an aerial view. 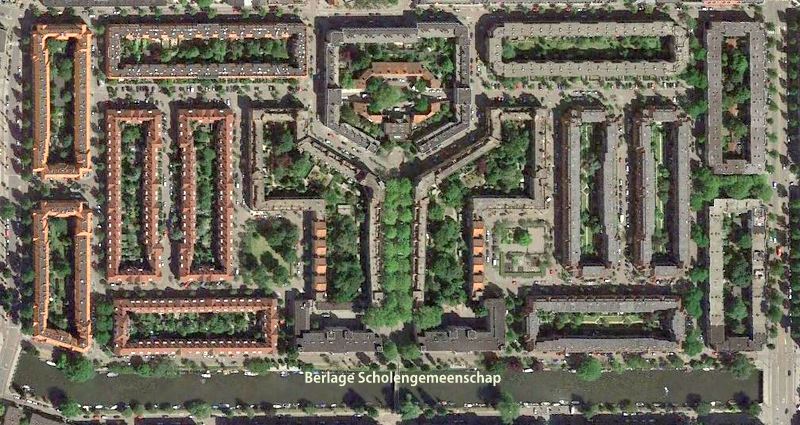 Here are a few pictures of the Berlage Scholengemeenschap, built in 1924 by Arend Jan Westerman.

And here a collection of pictures of the Dageraad complex.

The Amsterdam School style is easy to recognise, many buildings can be found in Amsterdam, maybe something for another blog…:-)