On 8 February, the Chinese year of the monkey started. I am a monkey myself, when you are familiar with the Chinese zodiac, you know that I will celebrate my 72nd birthday this year…:-). Oh, you thought it was my 60th? Don’t play play, lah!

This year I decided to join Aric in his hometown for the traditional steamboat dinner on CNY eve. He had gone to Parit Baru already a few days earlier to help his mother with the preparations. As usual there was a big crowd, dinner in two rounds.

Second round. In the right picture Aric’s mother and his older sister with her two children. 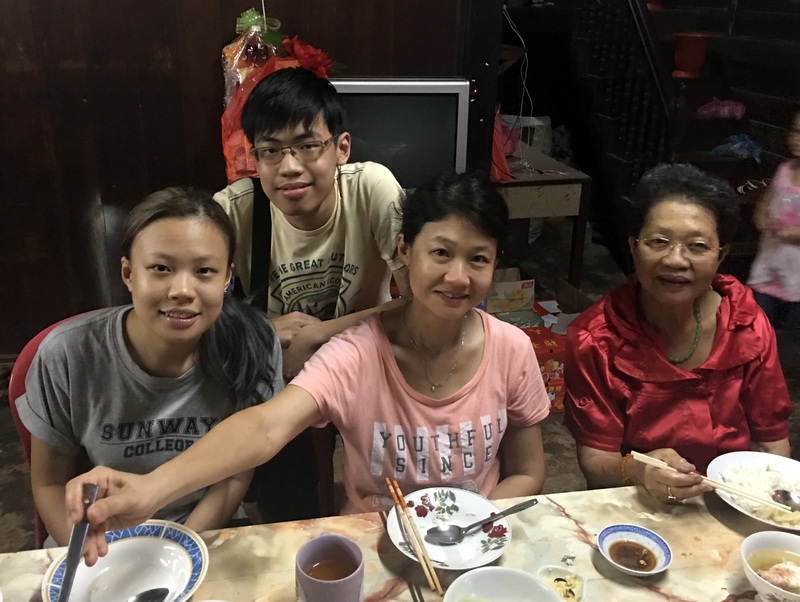 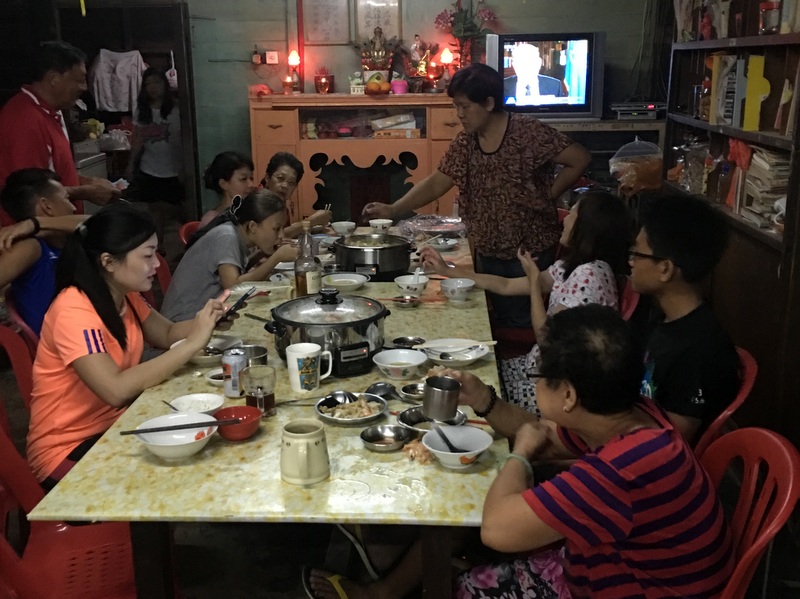 After the dinner it was time for the traditional Yee Sang ceremony. Yee Sang is a Teochew-style raw fish salad. Actually yee sang means “raw fish”, but the pronunciation is similar to the Chinese word for “abundance”. The ceremony is that the family members gather around the yee sang and toss the salad with their chopsticks. The higher you toss the salad, the more abundance you will get…:-)   It is a very Malaysian Chinese tradition.

On day 3 of CNY I was planning to visit a “new” waterfall between Beruas and Trong, with my waterfall friends Siang Hui, Nick and Rani. First I was thinking to stay in Parit Baru until then, but would I survive the crowd…:-)? Aric advised me that it would be better to “escape” for a few days, and come back on day 3 for the traditional family  party.

So I went to Taiping on day 1. I had booked a hotel in Taiping already, when my friend May protested, told me that the hotel was haunted and convinced me to stay with her in what she calls the “Maywarmers Lodge”. Of course Rani was welcome too. Malaysian hospitality!

By the same Malaysian hospitality I was invited for two CNY open houses…:-). I am a member of the Taiping Heritage Society and both Yeap, the president and Sharon, an active committee member, invited me as soon as they heard that I would be in Taiping.

Some of the guests

After the lunch I met Rani in town, he had traveled on his bike. Also Paul and Fahmi, who happened to stay in Taiping. We spent a nice afternoon together, visited the Burmese pool (really too crowded) and had a look at the ruined New Club swimming pool. We had a drink in the Lake Garden food court, before Paul and Fahmi went back to KL.

Rani posing with my beer…:-)

Later Rani and I had our dinner in the same food court, one of my favourites. And the next morning we had a dim sum breakfast with our hostess May.

Originally our plan was to visit Kuala Sepetang, but we felt lazy and only had a look in the afternoon at some of my “favourite” eyesore places in Taiping. I must have a  masochist streak..:-)

Ruins of the Casuarina hotel

Remains of the former Residence

That evening Rani joined me to Sharon’s open house. In the picture you see Sharon’s husband, Dr Chan Ah Lak and his nephew Henry Chan, who also happens to be a friend of mine. As usual Malaysia is a small world….

May had warned us that she was giving a CNY party for her former school mates that evening, so we were a bit shy to go back to her house…:-)  Of course a picture had to be taken, but after a while we could escape to our room..:-) 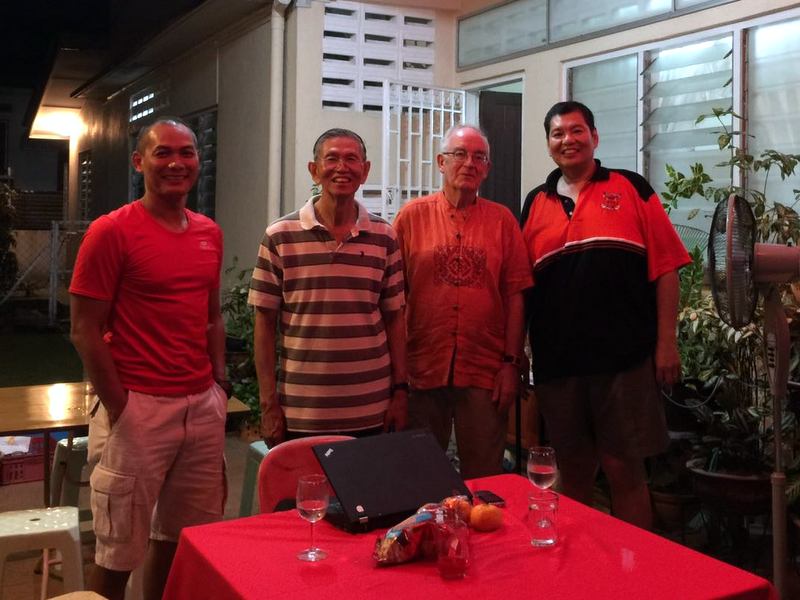 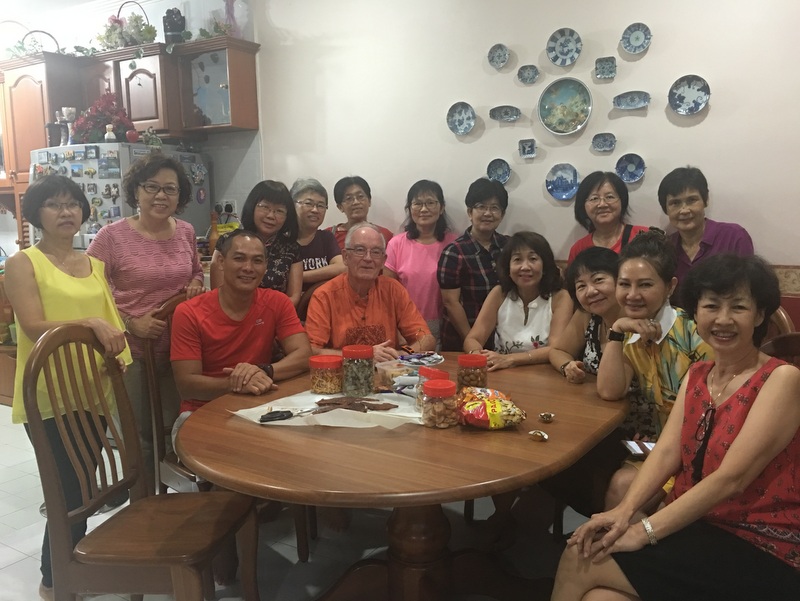 The following day we had arranged to meet Siang Hui and Nick (coming from Teluk Intan) at the entrance of the Allagar Estate, between Trong and Beruas. From there a plantation road would take us to the trail head. Siang Hui had discovered the waterfall a few years ago and baptised it Lata Hui..:-).

But what a disappointment. When we arrived at the trail head, we were stopped by an armed soldier, who told us that the region was out of bounds because of a military training. What to do? The only alternative was the Trong waterfall. We decided to go to the Upper Trong Fall, but we were not really in the mood, there were many leeches, we got lost a bit, and rather dispirited returned to the Trong Fall. A nice fall, we had our lunch there and a bath. But still a pity, we were so full of expectations.

On our way to Upper Trong

Here is a short video of the waterfall

After our lunch, we all went our way, Rani back to Meru, Siang Hui and Nick to Teluk Intan, and I back to Parit Baru. Where I caused quite a sensation, entering the kitchen..:-)  Leeches, somebody screamed and yes, I had not checked my sandals and brought a few of these critters in the house. Immediately they were covered with salt, but I felt quite embarrassed.

It was a nice evening. With the traditional firecrackers, a lucky draw, gambling and of course lots of food. Each year Aric likes to take an “official” picture and this year had decided for a location on the road outside the house. Not easy to control a crowd, but he managed…:-)

Aric trying to position the crowd

Here is the official picture of CNY 2016. The rule this year was to wear either a blue or a yellow shirt.

And here are the firecrackers. Illegal, but hey, this is Malaysia!