A few weeks ago friends told us about an interesting jungle resort, called The Sticks, between Kuala Kubu Bharu and Fraser’s Hill. Accommodation in so-called tendoks (a cross between a tent and a pondok). We decided to give it a try, stay overnight and visit the next day the nearby Chiling waterfall.

We stopped for lunch in KKB as Kuala Kubu Bharu is commonly called. KKB is a charming little town with many eateries. We went to Xin Yuen Kee, where we had Loh Mee, Fish Cakes and delicious Stewed Chicken Feet. 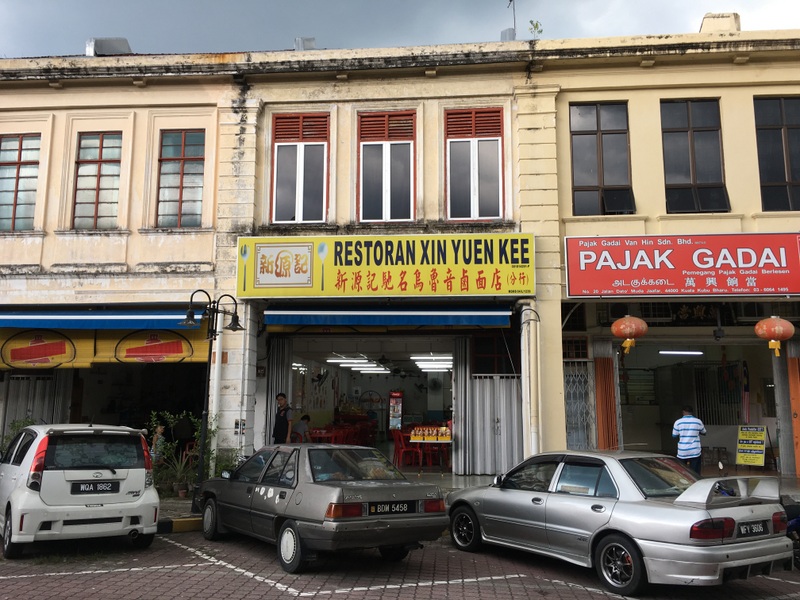 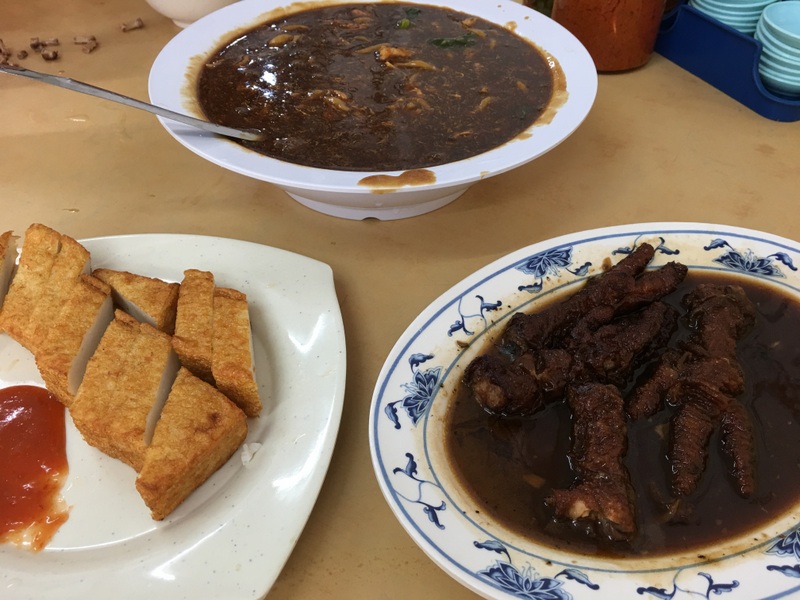 We had left KL with sunny weather, but when we walked back to our car after lunch, we felt the first raindrops, which soon became a heavy downpour. I had just time enough to take some pictures of the mural art, which is mushrooming all over Malaysia these days. It is not Zacharevic standard here in KKB, rather primitive, but with a certain charm.

The downpour became so heavy, that we skipped our plan to take some drone video at the Selangor Dam. Instead we continued to the Sticks parking, where our host Rubin was already waiting for us with umbrellas (we had messaged him from KKB about our arrival time). It was a short, romantic footpath to the resort, crossing the Selangor river on a sturdy hanging bridge.

We received a hearty welcome from our hostess Michelle and were shown our tendok. Named the Riverside tendok, because it is located almost above the river…:-). Attached bathroom, hot shower, fan, mosquito nets, very private location, surrounded by jungle. 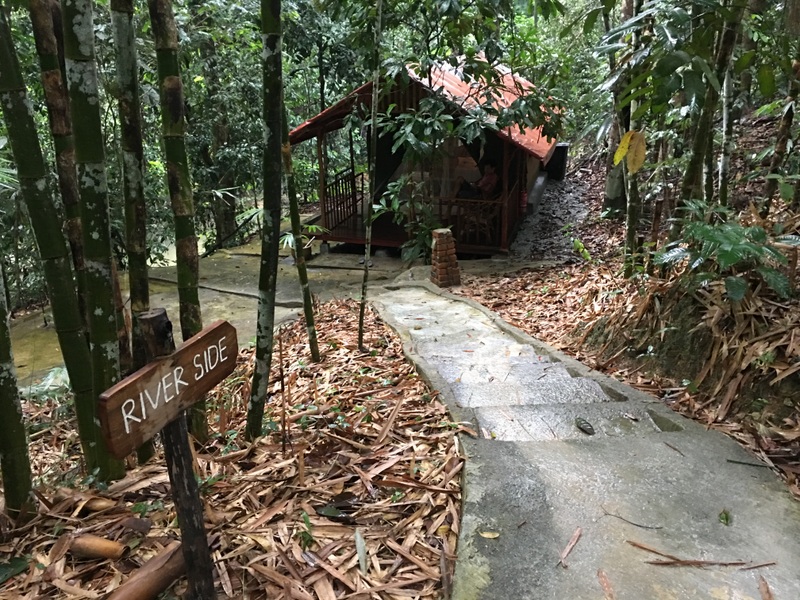 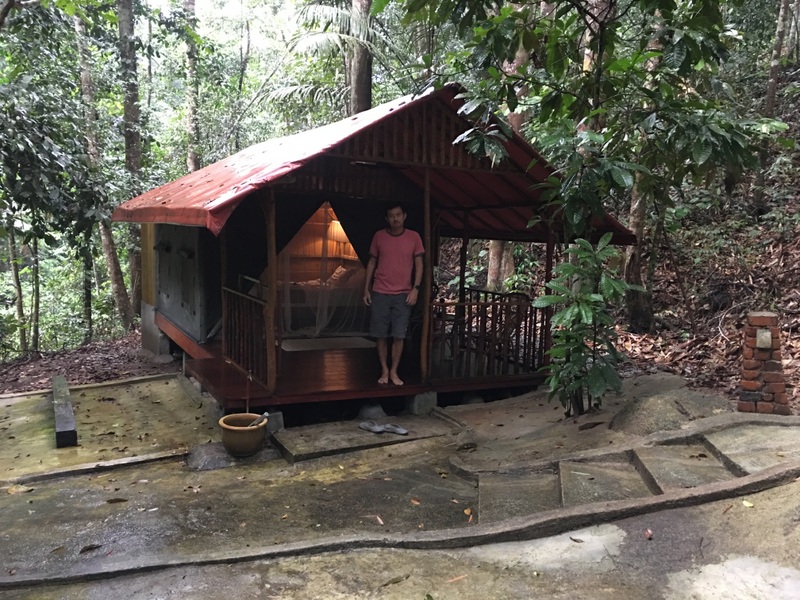 View from inside the tendok

After the rain stopped, we explored  the surroundings. The hanging bridge is close by, from there you could see how strong the water flow was after the heavy rain. From our tendok a few cemented steps led down to the river. A nice place to take a bath, but it was a bit too chilly after the rain.

Milky water after the rain

The bridge from our tendok

Not taking a bath, quite cool

We had a few hours to spend before dinner. No wifi, no computer! Finally I could finish Sapiens, A Brief History of Humankind. Ok, I had it as an iBook on my iPad…:-). 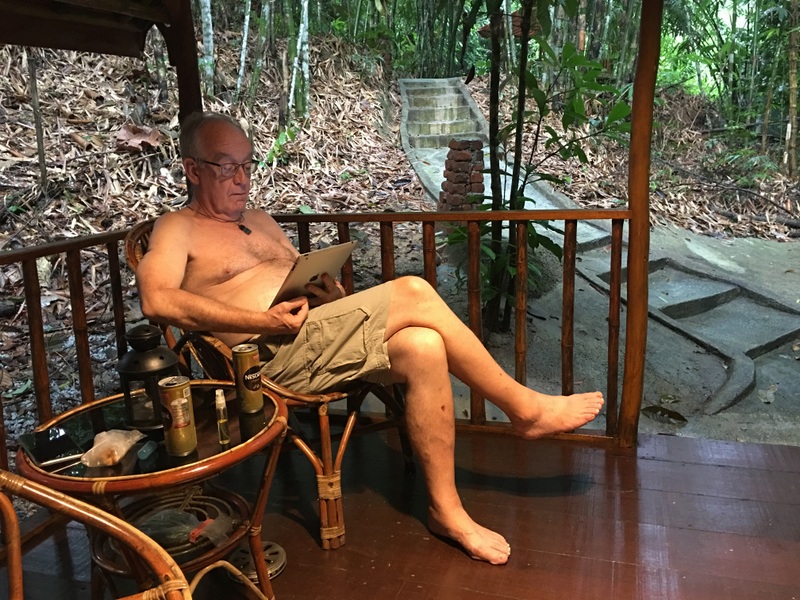 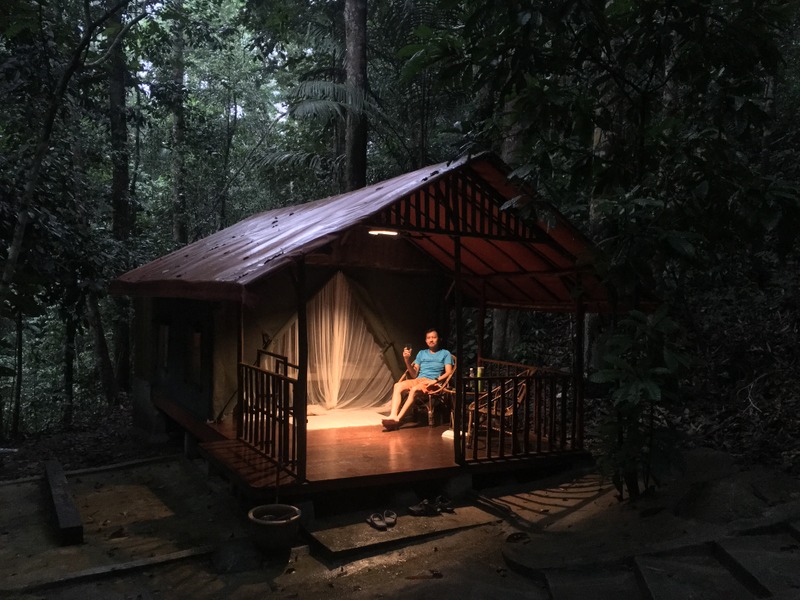 When the evening came,  clouds and mist made the surrounding landscape even more romantic 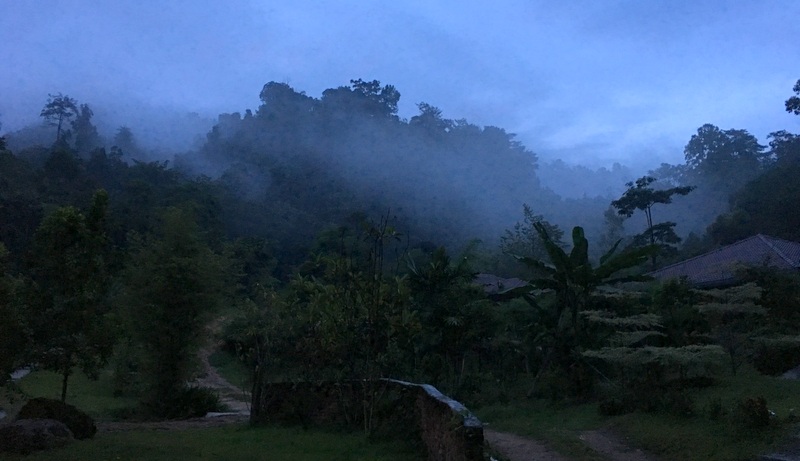 Dinner was served in the community hall, where we met a few more guests. It was a barbecue dinner , served on banana leaf. A variety of fish, chicken, beef and lamb, attractively presented.

We went to bed early, but woke up around 11 pm because it started to rain again. Not just rain, a huge downpour with thunder and lightning. The sound of the rain drops on the roof of our tendok was so loud, that we could not hear the sound of the river anymore and it was almost impossible to talk to each other. Fortunately our tendok turned out to be 100% rainproof. But when we woke up the next morning, the water level in the river was still high and the colour brownish.

To reach the Chiling waterfall you have to cross another river (a tributary of the Selangor river) many times. Also the weather did not look very stable. And we felt lazy. We decided to skip the waterfall and instead to relax in the resort until checkout time.

The service at The Sticks is personal and friendly. The night before, after dinner, Michelle had asked us how we liked our breakfast. Omelet, fried eggs or half-boiled eggs? Beef or chicken sausage?  Ham ? Beans? Tea or coffee? There were cereals, toast, jam, butter. So we had a full English breakfast in the jungle! The only thing that was missing was a glass of orange juice…:-) And of course it was halal. 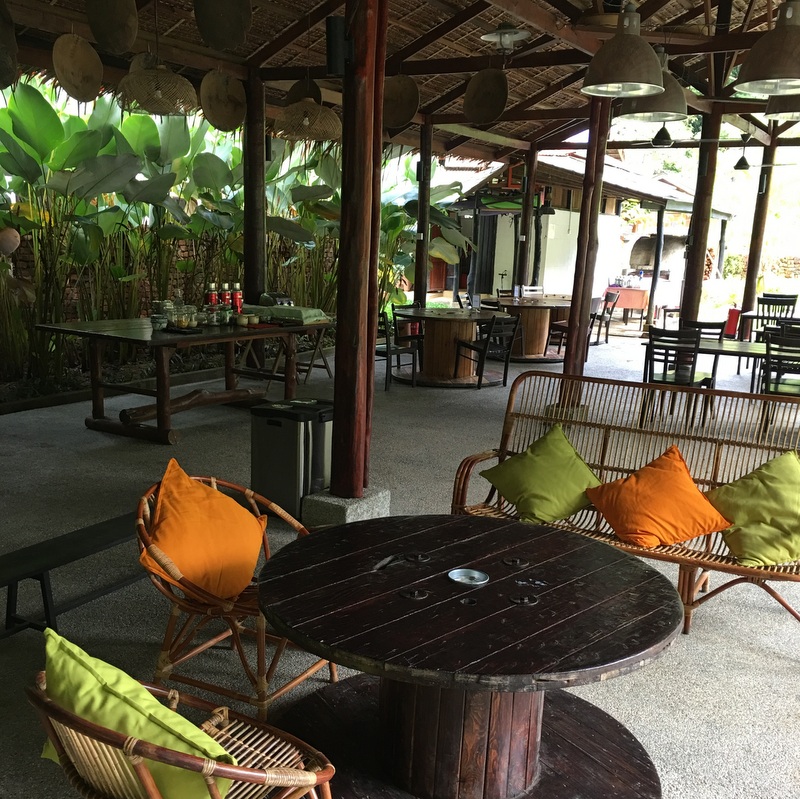 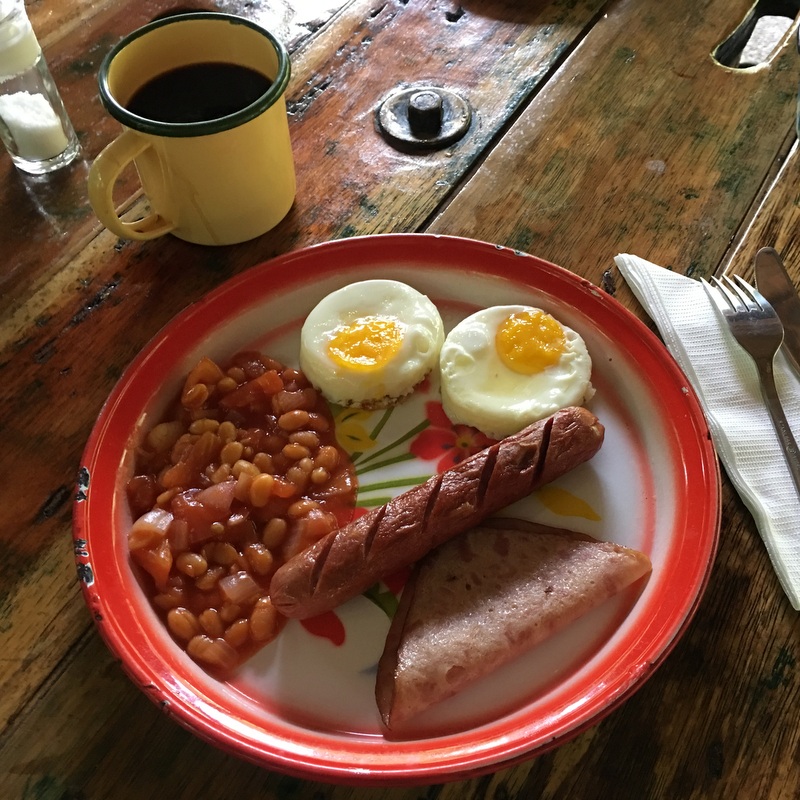 After our breakfast we enjoyed our tendok, walked around to take pictures and I talked with Rubin about the history of the place. The resort is not old, in the past there was tin mining at this location and later a (failed) fish farm project. The present owners have done a good job, replanting trees and landscaping the terrain. Here is a picture of the community hall. The tendoks (7 at the moment) are in the jungle behind the hall

Some pictures of flowers, a harmless millipede and an old water pipe, dating back to the tin mining period. According to Rubin,  remains from that period can still be found in the jungle, but access is not easy. 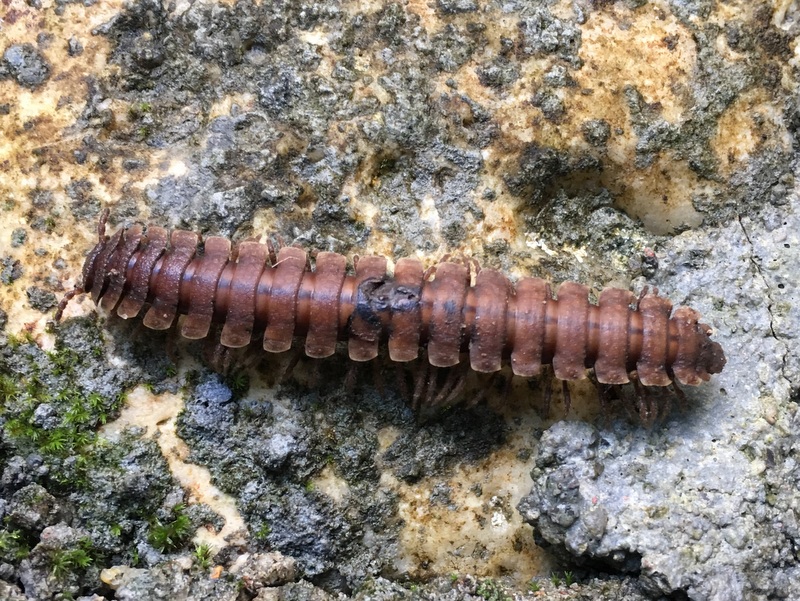 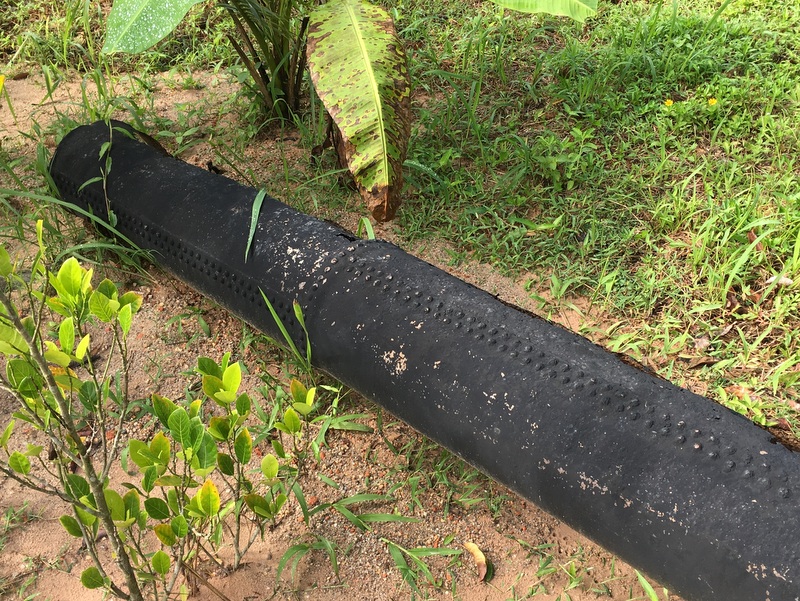 Then it was time to leave our temporary home and cross the bridge back to the main road. 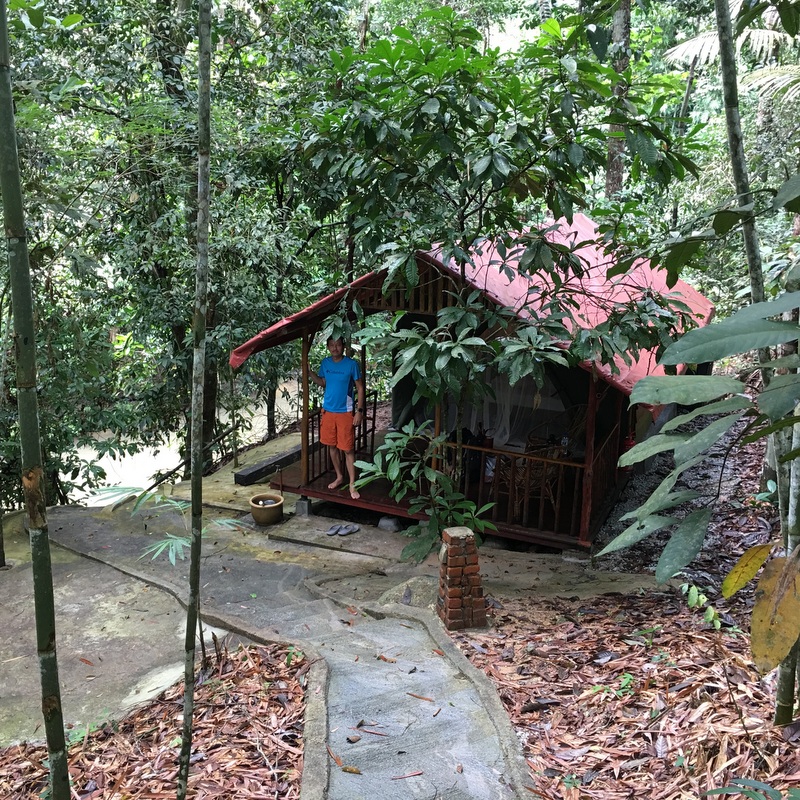 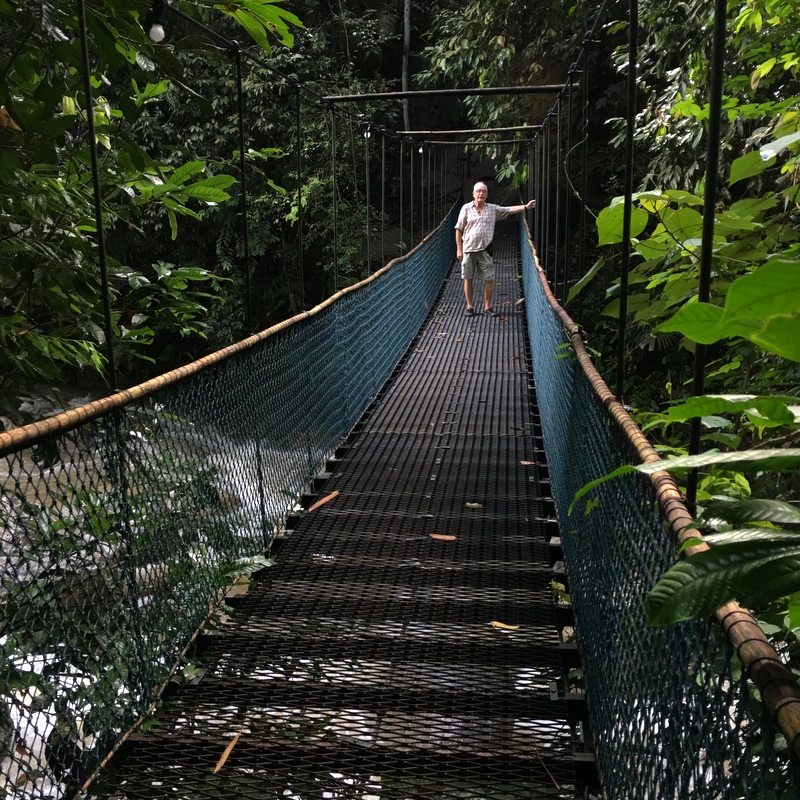 The main reason to visit Chiling this time (I have visited the waterfall 15 times already during the past 14 years!), was to take a drone video of the fall. Pity that we could not do that, we must come back another time.

Instead, on our way back passing the Selangor dam, we stopped at the visitor center to take a video there. But soon a friendly girl came to warn us that droning was not allowed there. So we drove up to kampung Gerachi uphill, from where you have a nice view of the reservoir and the spillway. The reservoir was full and the spillway was impressive, an artificial waterfall.  It is nice to see everything from the air.

Here is a short video of the spillway

On our way back we stopped in Serendah for lunch. A nameless Thai restaurant on a slip road beside the trunk road has a reputation for its Tom Yam. Very tasty, we combined it with refreshing Leng Chee Kang 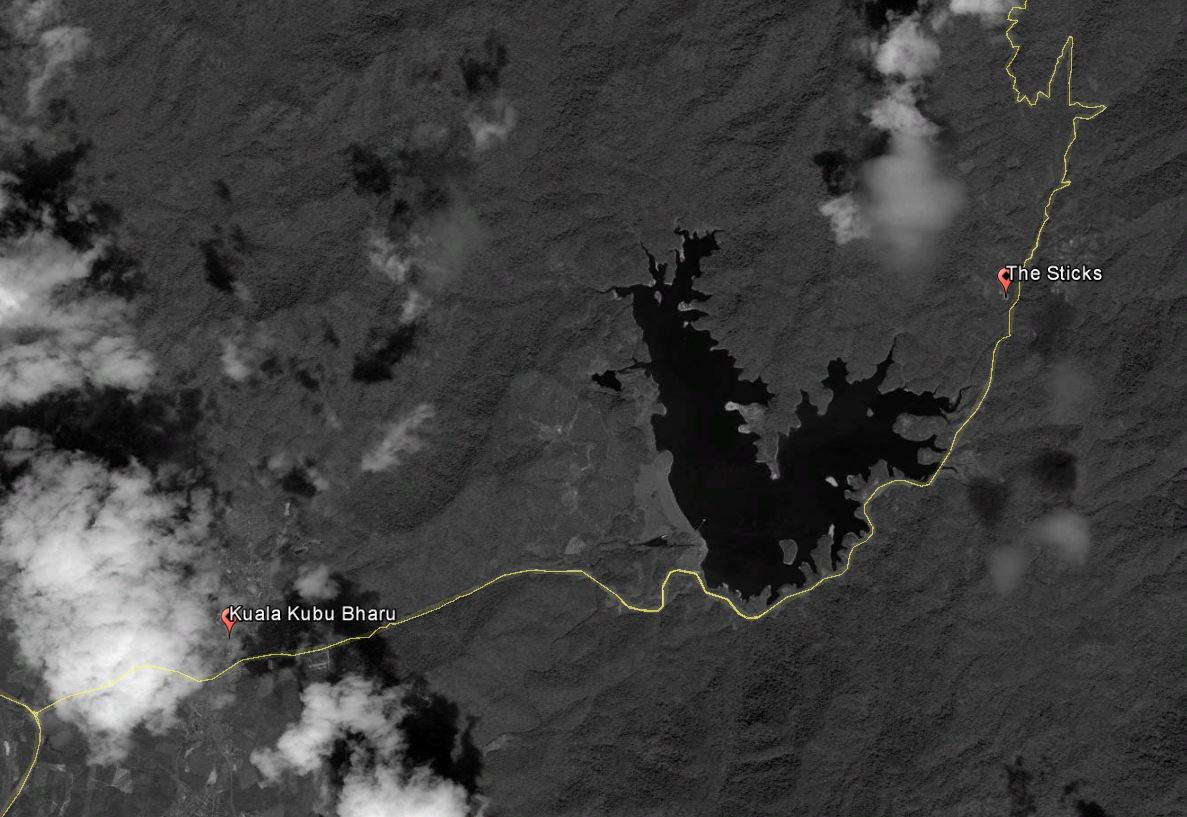 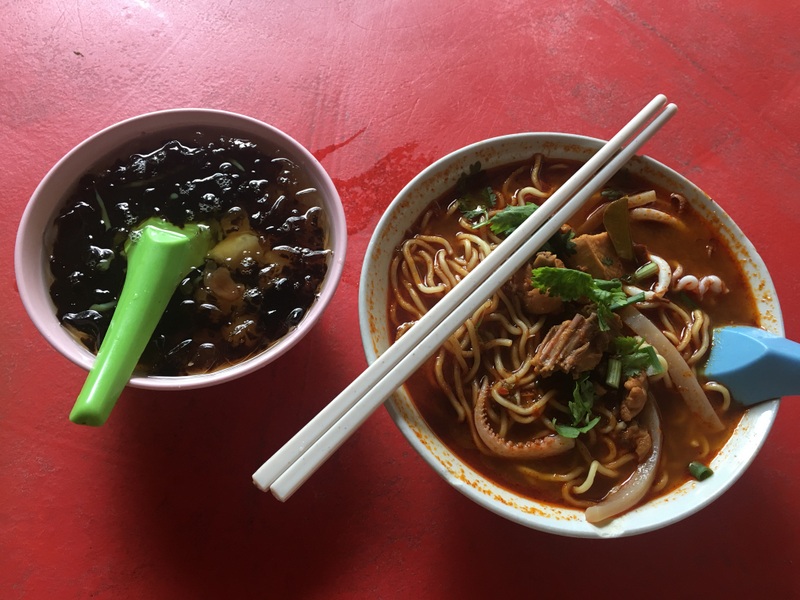 4 thoughts on “A relaxing trip”