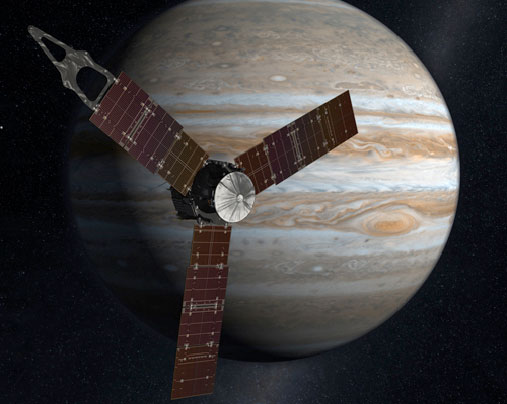 But we will start with some Roman (Greek) mythology. Jupiter (Zeus) was the king of the gods and Juno (Hera) his wife. Jupiter was an promiscuous god with numerous extramarital affairs and Juno was a jealous spouse, always keeping a eye on her adulterous husband.  Here are a few of his affairs

You will understand that as schoolboys we were always happy when our Latin and Greek  teachers told us about these myths…:-)

Back to astronomy. Jupiter is the largest planet in our solar system. The planet is so big that all the other planets would fit in it. It is the second-brightest planet (after Venus) in the night sky.

In 1610, Galileo discovered that Jupiter has four moons. In the image you can see their size, compared to Jupiter. They look small beside the planet, but they are actually big. The largest one, Ganymede, is bigger than the planet Mercury! 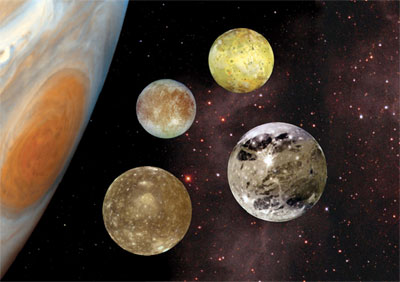 The four moons were named after the four lovers of Jupiter named above! Below you see a (resized) image of each moon and a painting with Jupiter in action.

Since Galileo observed the four moons, many more (smaller ones) have been discovered. At the moment 67  moons have been observed, of which 53 have been named, often after Jupiter’s girlfriends and boyfriends…:-) Here is the complete list of Jupter’s moons

“The god Jupiter drew a veil of clouds around himself to hide his mischief, and his wife, the goddess Juno, was able to peer through the clouds and reveal Jupiter’s true nature.”

Actually the mission of Juno is to explore Jupiter and not his moons…:-) Much is still unknown about this gas giant. Does it have a solid core? Does its atmosphere contain water? An important part of the mission will be the study of Jupiter’s gravitational and magnetic fields.

So, let us follow Juno on her exploration of Jupiter. It took her five years to reach Jupiter. Why so long? Here is the reason: 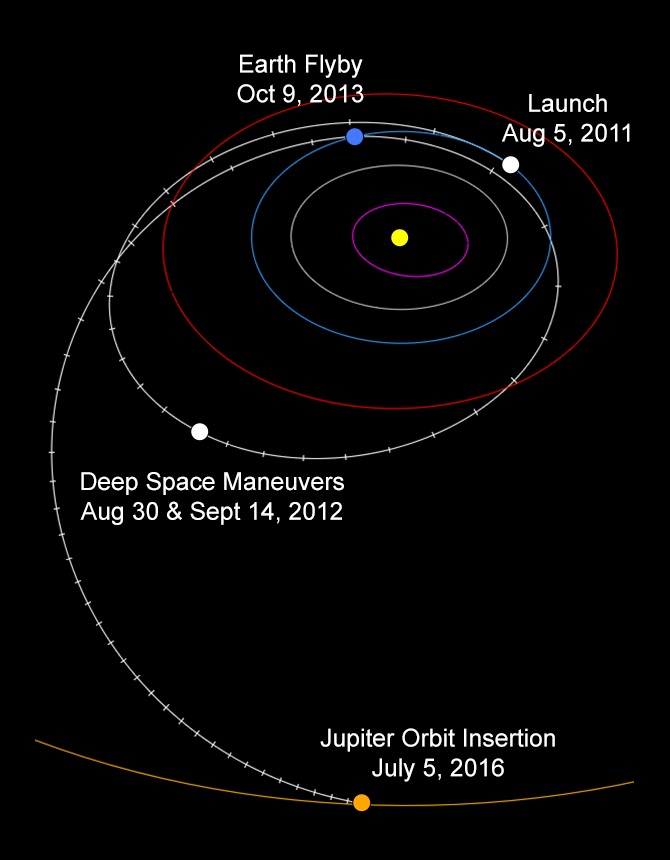 To give the spacecraft enough speed at launch to reach Jupiter would cost too much energy. Therefore it is first launched in an (elliptical) orbit around the sun.

The Deep Space Maneuvers one year later will bring it back very close to Earth, which will give it a gravitational slingshot. See my Rosetta blog for an explanation.

As a result the orbit becomes a hyperbole, at the right moment crossing the orbit of Jupiter, where it will be captured by the planet.

Here is a fascinating animation of the whole process.

Jupiter has to be approached carefully because of its intense radiation belts. The magnetic field of a planet traps charged particles like electrons and protons in a doughnut-shaped region around the planet. Earth has these radiation belts, they are called the Van Allen Belts. For Jupiter they are many thousand times stronger and can seriously damage the spacecraft. 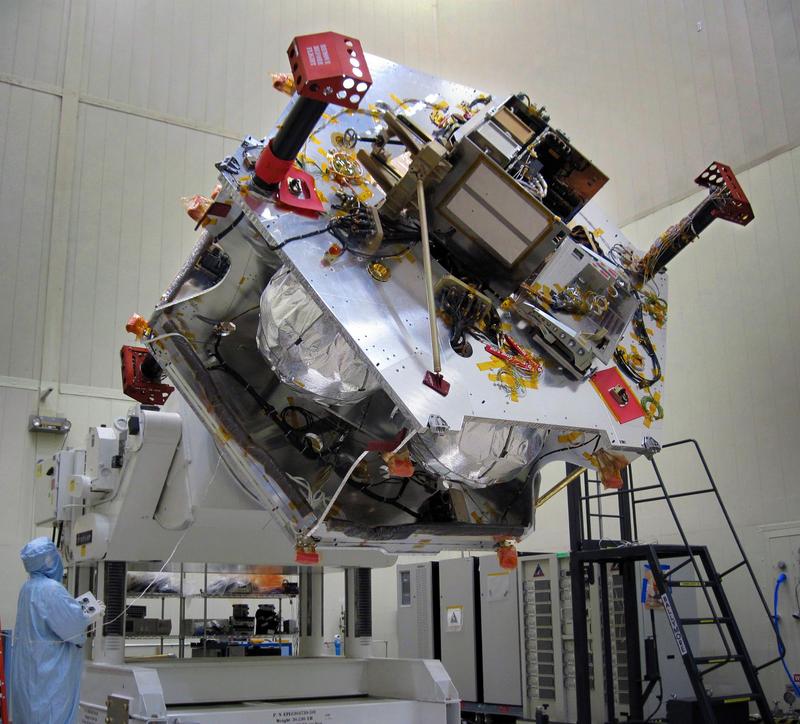 To protect the instruments of Juno, the most sensitive ones have been placed in a titanium container with 1 cm thick walls and a weight of 18 kg.

Note the size of the human!

To minimise the radiation risk, Juno has to be captured carefully in a polar orbit. Here is a YouTube animation:

The capture orbit is very elliptical with a period of ~ 54 days. The original plan was to reduce the period to 14 days, after two capture orbits (1 and 2). The first reduced orbit (3) would be a clean-up orbit, followed by 32 “science” orbits (4-36), each of them slightly shifted, so the whole surface of Jupiter would be covered.The image gives an impression of these science orbits. Mind you, during each 14 days only a few hours before and after perijove (the point of shortest distance to Jupiter) can be used for science! 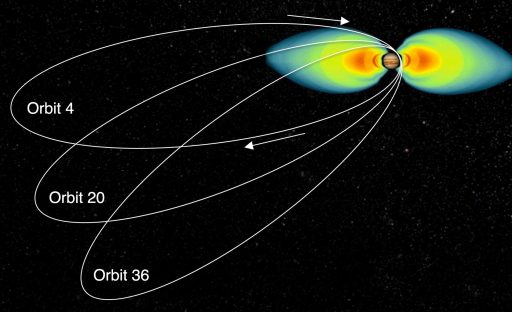 However, during the second orbit, a few days before the planned Orbit Reduction Maneuver on 19 October 2016, a problem was found with some helium valves needed to operate the main engine, and a few hours before perijove, the spacecraft went into “safe mode”, because the onboard computer encountered unexpected conditions. The next two orbits were used for testing and diagnostics.

Finally, on 17 February 2017, mission control decided it was too risky to perform the Orbit Reduction Maneuver. So the  spacecraft will remain in  its 54 day orbit. Totally 12 science orbits will be performed until July 2018. The next perijove (orbit 7) will occur on 11 July.

It must have been quite a disappointment for the scientists, instead of new data every two weeks, they now have to wait almost eight weeks.

The most spectacular results come from the on-board camera Junocam. Here is an image of Jupiter’s south pole, not observable from Earth. Amazingly complex and turbulent. 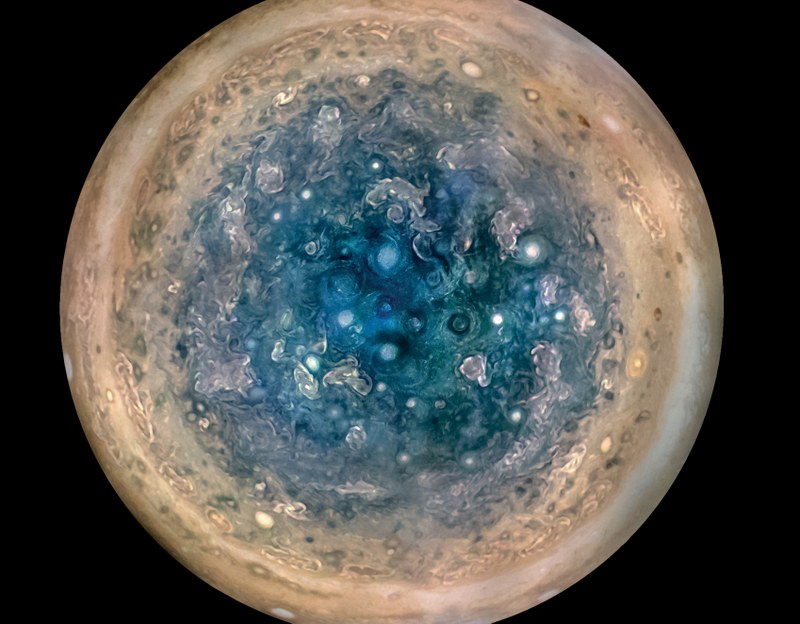 And last week NASA published another picture, taken 19 May, just after Juno passed perijove 7. Keep in mind that these images are color enhanced! Part of the south pole region is visible. The white spots are part of the “String of Pearls”, massive counterclockwise rotating storms. 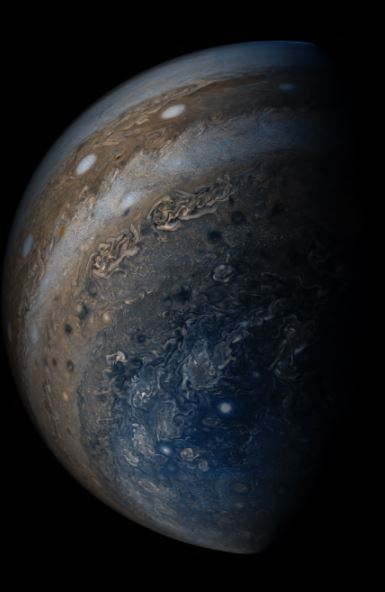 The next orbit will pass over the famous Great Red Spot, a storm on Jupiter that has lasted already for several hundred years and is so big that Earth would fit inside it. Will be interesting to see images.

At the end of the Juno mission,  the spacecraft will be directed into the Jovian atmosphere, where it will be completely destroyed. This will be done to avoid any chance that material of Juno might “contaminate” one of  Jupiter’s moons. If ever life forms are found on these moons, there must not be any doubt about its origin.

To end this post in a lighthearted way, the Juno has three passengers on board! Figurines, specially crafted by Lego in the shape of Jupiter (with a lightning bolt), Juno (with a magnifying glass) and Galileo (with a telescope and Jupiter in his hand) 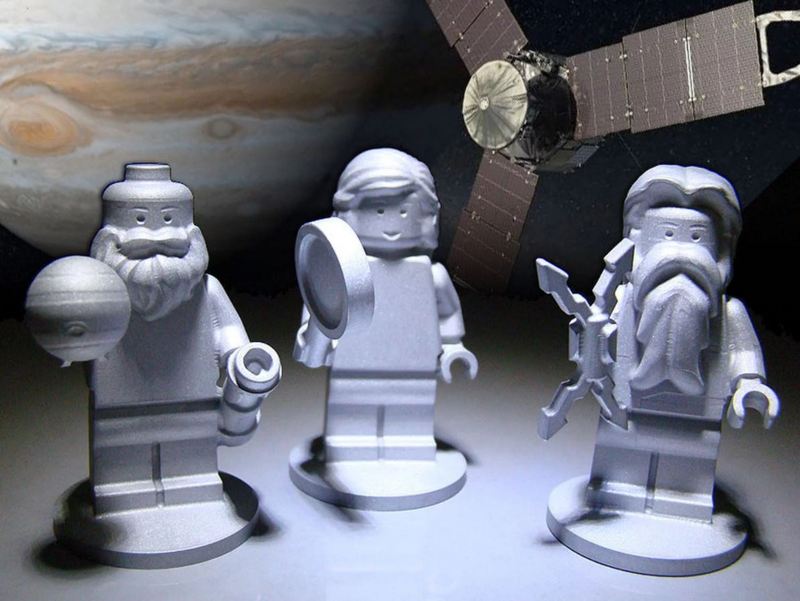 Preparing this post, I have made extensive use of a very informative web page: Juno Mission and Trajectory Design . Very detailed and sometimes quite technical, but worth reading.