My last visit to Taiping was in December and in my blog about this trip I explained why I visit my second hometown so often: “meet friends, enjoy the food, see what is new (and what is still ruined)”  It was similar this time..:-)

I drove this time, it was the Cheng Beng weekend, but on Friday traffic was still smooth. My plan was to have lunch with Pasembor and Cendol in Ansari, but the shop was closed, so I went to the Old Railway Station and had Assam Laksa there. Not bad.

Pity that the January Cafe is closed. As a result the Old Taiping Railway Station Gallery is also closed, because the two brave girls who have tried to run the cafe, rented the space on condition that they would take care about this picture gallery.

Before checking in at my hotel (Furama as usual), I had a look at some buildings along Station Road. The renovation of the Ceylon Association Building (1901) seems to be ongoing.

However, the nearby Rest House (1894) remains in a deplorable state. I really do not understand how the Taiping Town Council (MPT) can still keep the heritage signboard in front of this dilapidated  building. 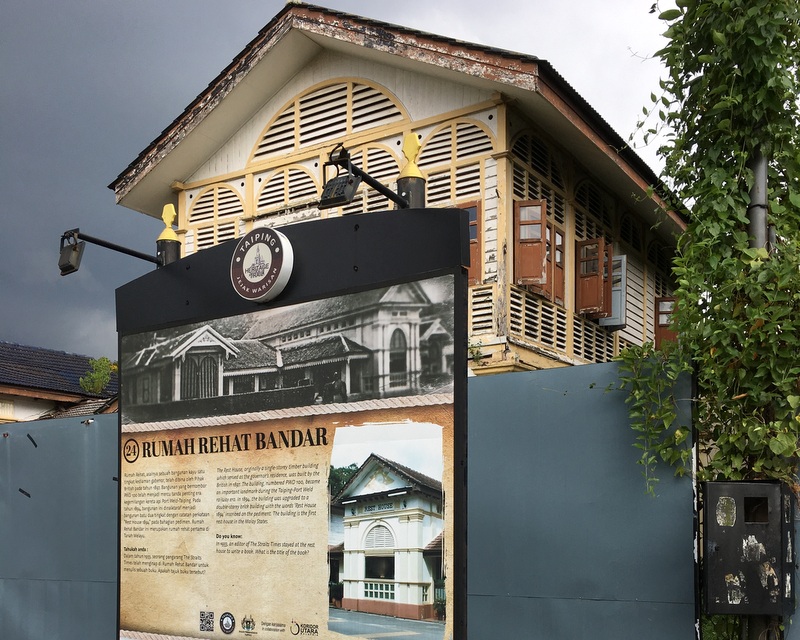 In the afternoon I walked to the Lake Gardens. Recently a small part of Jalan Pekeliling (the former Circular Road ) has been closed to traffic and become a pedestrian area. A good initiative.  The famous raintrees bordering this road are getting old and a few weeks ago one of them  has fallen down on the pedestrian stretch. For the time being MPT has decided to leave the tree there, it has become a tourist attraction..:-)

The Lake Gardens were beautiful as always. If I would be living in Taiping, I would walk here daily..:-) 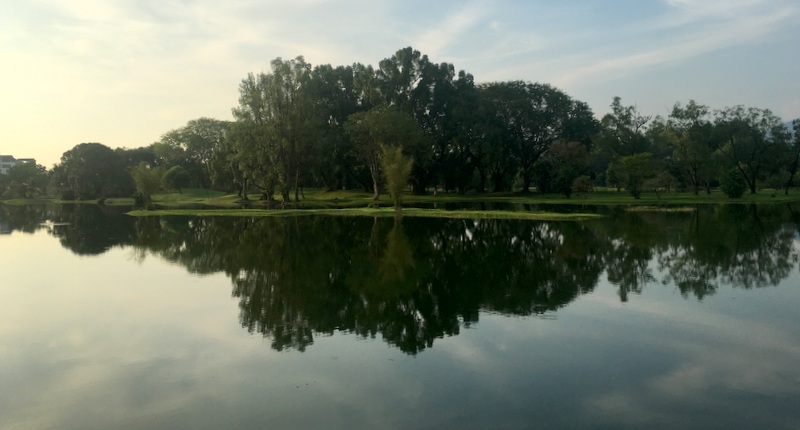 I had dinner with friends. They suggested to have Western food for a change! We went to Thomas Western Food on Barrack Road, where I had a tasty pork chop with cheese. I noticed that Thomas was wearing an Amsterdam T-shirt and asked him if he had visited my country. He had not, the shirt was given as a present..:-)  Will come back to his shop

Actually I came back to the same shop the next morning. I had breakfast with Dr Lee from Singapore who was back in Taiping for Cheng Beng. He suggested a shop opposite his house in Barrack Road. Stalls with a variety of food. It looked so different that I did not recognise it as the same place where I had dinner the night before!

A few weeks ago a booklet was published, Taiping the Guide,  with 128 pages of tourist information (in English and Malay) about Taiping. Free of charge for visitors. Of course I wanted to get a copy, so I went to the Taiping Tourism Office in the Old Clock Tower. But it was closed, apparently because of “change of management”. At least a notification should have been put on the door. 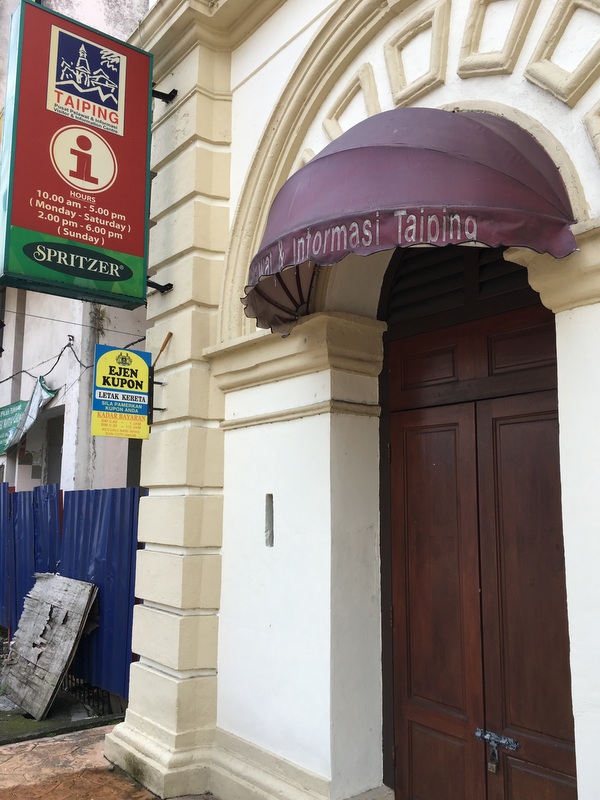 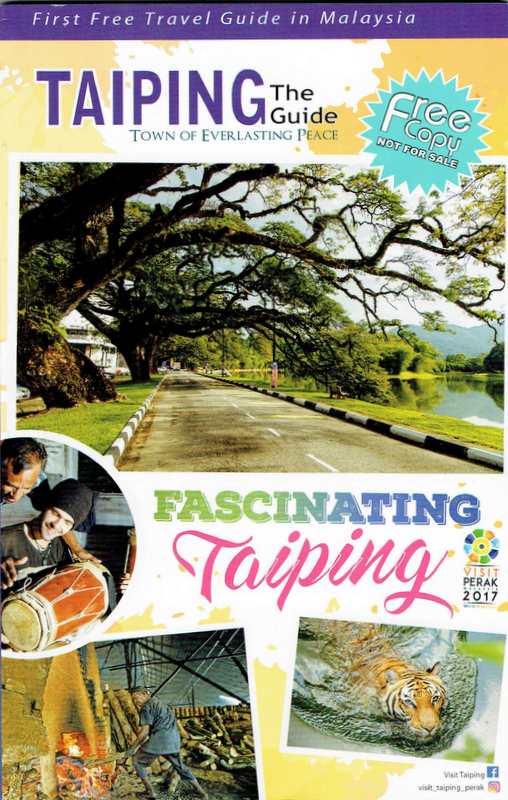 Searching for more information about this booklet,  I  came across an article about Taiping in the digital edition of the famous Rough Guides. Together with the Lonely PLanet guides, they were my traveling “bibles” in the past…:-). Here is an interesting quote:

Nowadays, bypassed by the North–South Expressway and replaced in administrative importance by Ipoh, Taiping is declining gracefully, its streets lined with tattered architectural mementoes of its glory days.

This collage could be an illustration

Of course many nice heritage buildings can still be found 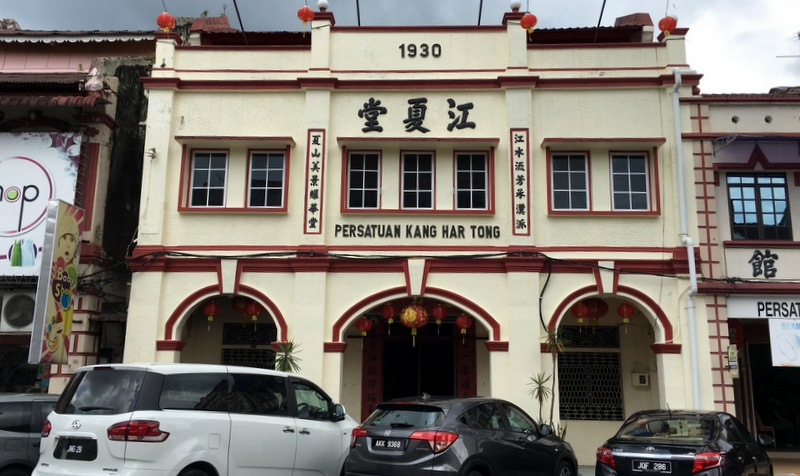 But many basically nice heritage buildings have been “defaced”. Awful painting, giant signboards, are there no rules and regulations about what you can and can not do with historical buildings?

Walking back to my hotel in the evening I noticed a small crowd near an Indian shop. There was music, people were playing the drums. What was happening?.

Soon it became clear, a chariot was approaching, there were devotees offering and coconuts were smashed. It reminded me of Thaipusam, but, searching the Internet later, I found out that it was actually the celebration of Panguni Uthiram, an important day for (Tamil) Hindus. It is believed that most divine marriages took place on this day, for example the marriage of Goddess Parvati and Lord Shiva.

This cultural diversity in Malaysia is one of the reasons that I feel so at home. Pity that politicians try to destroy it, by fueling tensions between Malay, Chinese and Indians 🙁

The next morning I went to the Nest, the “heaven on earth”, managed by my friends Suet Fun and Peter. The Maxwell Hill jeep service took me to Speedy’s bungalow, from where it was a few minutes walk to the Nest. My first visit was last year, have a look at my report Maxwell Hill, May 2017

When I was sitting on the steps at the entrance of the bungalow, enjoying the surroundings, two hikers came up, asking me if this was the way to Gunung Hijau. When I said no, and gave them the correct directions, they asked “Do you live here”?How I would have liked to say yes..:-)

Here are two pictures of the interior.

I had a relaxing time, reading books and walking around a bit. The garden has beautiful flowers. The last morning we discovered a new-born Red Helen butterfly, just out of the pupa, still pumping up its wings. And in the kitchen a very bizarre cockroach, with a head shield resembling the head of a tiger. Apparently a Homalosilpha ustulata

The second day of my stay I decided to have another look at the Birch monument. On my way down from the Nest, I passed Speedy’s, very scenic with the misty weather

It’s a sad story. In 2004 I have celebrated my 60th birthday in Speedy’s (see the above-mentioned report) with Guna as caretaker. It was a beautiful bungalow. Later it was closed and transformed into a Biodiversity Center. A failed project, now it is empty, waiting for a new destination?

Strangely enough it is still mentioned in the Taiping The Guide booklet. The description  ends with :

The Bukit Larut Biodiversity Center will be a very interesting tourist attraction. making it a must visit in every traveler’s checklist when they are in Taiping 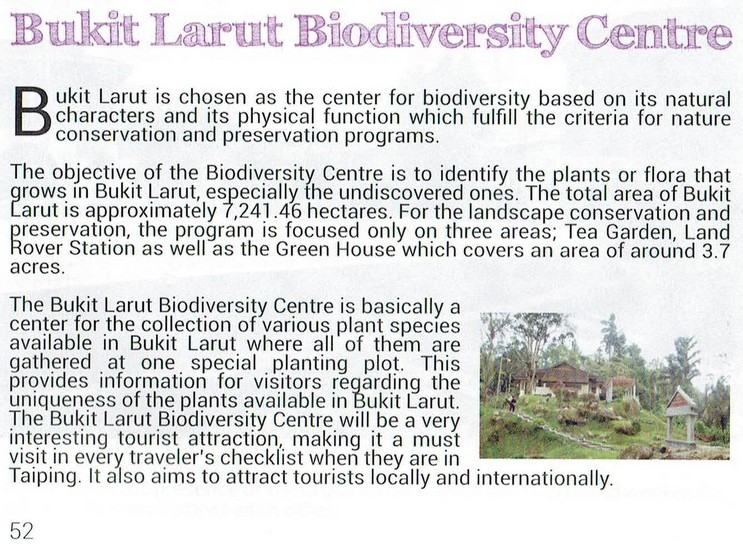 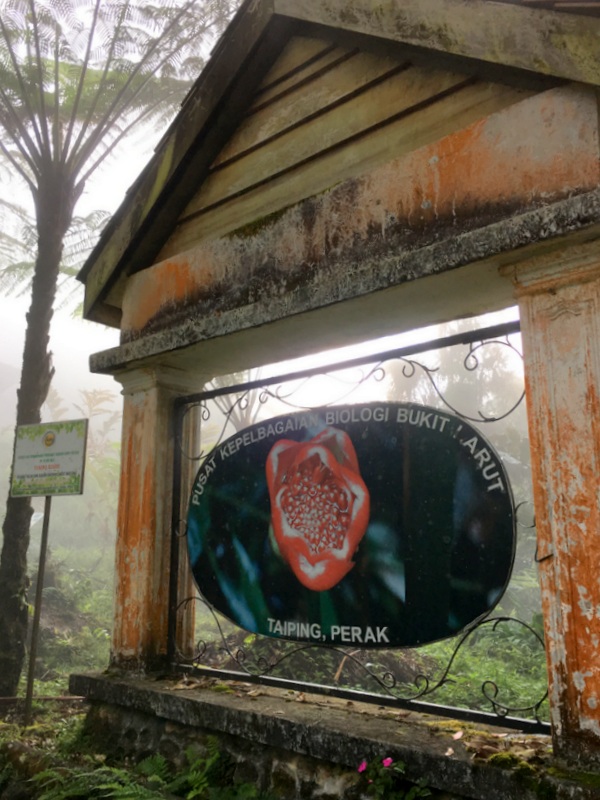 When I visited the Birch monument last year, my friend Amril guided me there. Now there is a sign and a clear trail leading you after 150 m (not  50!) to the monument. Why it mentions T.W.W Birch instead of J.W.W Birch still remains a mystery.  Be prepared for leeches when you visit the monument

It was a pleasant stay in the Nest, not in the least because of the food Suet Fun and Peter are preparing for their guests. Not only delicious, but also a feast for the eyes

Rather reluctantly I took the jeep back the next day. I had lunch with my friends in Prima, after which I drove back to PJ. Sunday evening (Cheng Beng!) it had taken friends ten hours to drive back, but on this Tuesday afternoon traffic was smooth

Already looking forward to go back to Taiping and the Nest 🙂