Wolfgang Amadeus Mozart (1756-1791) wrote his first opera, Apollo et Hyacinthus, in 1767, when he was eleven(!) years old. Recently  I have been listening many times to this  fascinating work of art, really amazing that it was written by an eleven year old boy.

Not many recordings exist. Here is a beautiful one.

The Greek myth of Apollo and Hyacinthus is an interesting one, because it describes the love between the god Apollo and the boy Hyacinthus. The Greek gods were not picky and had love affairs with both men and women. Famous example is the love of Zeus for the boy Ganymede.

In this case  both Apollo and Zephyros, the West Wind god, were in love with the handsome Spartan prince. Hyacinthus preferred Apollo. When the two lovers were playing with the discus, Apollo threw it very high and far and Hyacinthos tried to catch it. Jealous Zephyros blew the discus off its course, it hit Hyacinthus and killed him. Apollo was desolate, could not bring the boy back to life, but created from his blood a beautiful purple flower.

Painters loved the subject, here is a version by the Russian artist Alexander Kiselyov. The discus is lying on the ground. The flower was not the present hyacinth, but probably the blue larkspur. Ovidius who describes the story in his Metamorphoses, tells that Apollo inscribed “Ai Ai”, the Greek expression of grief on its petals. And indeed, with some imagination you can see in the flower an A en an I …:-) 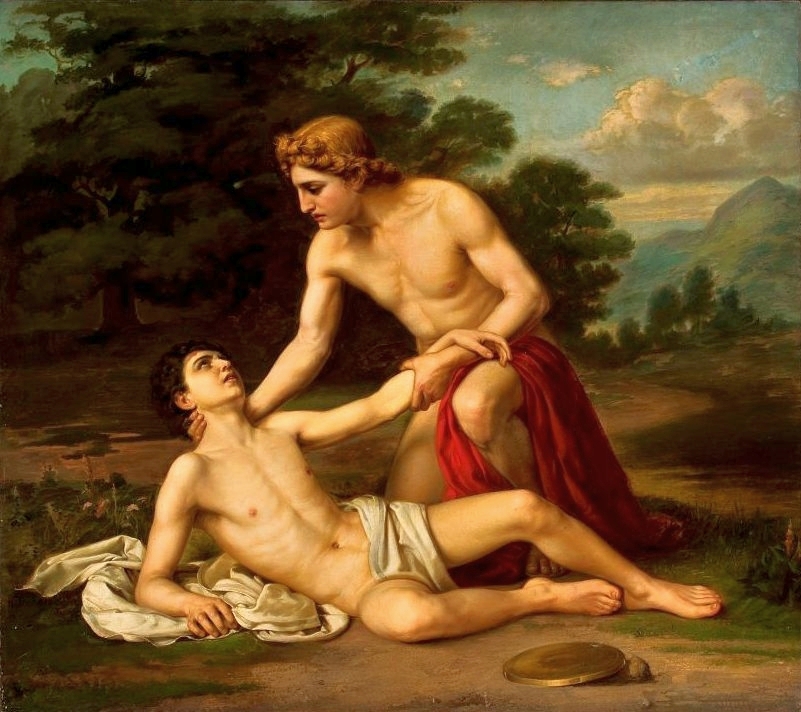 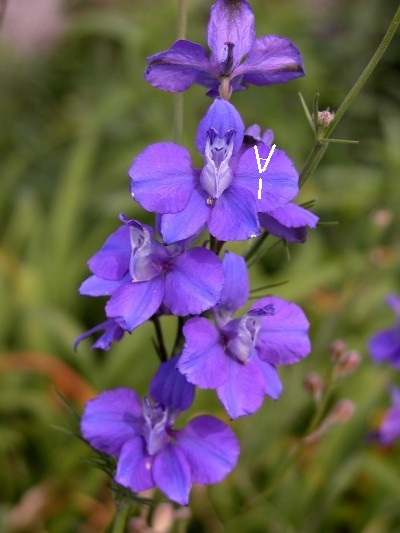 How is this  homoerotic love affair between Apollo and Hyacinthus, with Zephyros as a jealous rival presented in the opera? Mozart used a libretto written by Rufinus Widl, priest and philosophy professor at the University of Salzburg that had commissioned the opera. Father Widl removed the controversial  theme by introducing a sister of Hyacinthus, Melia, who is the subject of Apollo’s love and Zephyros’ jealousy!

I got intrigued how Widl had done this. The libretto is written in Latin and my knowledge of that language has become quite rusty, but I found an English translation…:-) . I have created a webpage on my site: Apollo et Hyacinthus , where you can read the Latin and English text, while listening to the corresponding parts of the opera. Give it a try!

Here is a screenshot of my webpage. Note that there are only 5 soloists, Hyacinthus, his sister Melia, his father Oebalus, Apollo and Zephyros. More about the soloists later 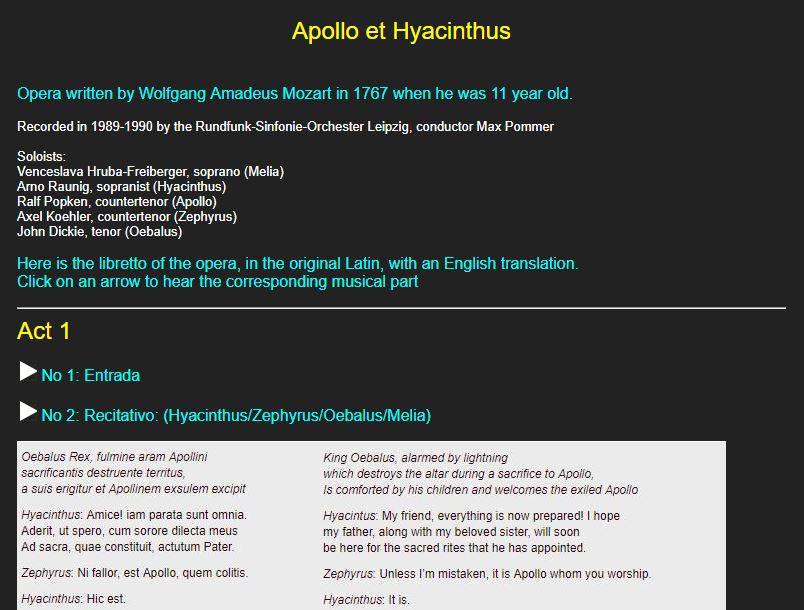 Here is a  synopsis of Widl’s libretto

The opera starts with a conversation between Hyacinthus and Zephyros . Hyacinthus is preparing an offering for Apollo, and Zephyros is wondering why especially Apollo. Oebalus and Melia appear, everything is ready, but then lightning strikes and destroys the offering. Oebalus is upset, what have they done wrong? Could it be because of what Zephyros had said?

Then Apollo appears, as a shepherd, because he has been banned from the Olympos by Jupiter. He is humble and promises to help Oebalus if he can stay in his kingdom. Melia adores him and Apollo accepts her love with pleasure. He will also be a good friend of Hyacinthus. Zephyros, in an aside:  Alas, now Apollo is snatching my beloved boy from me!.

Conversation between Oebalus and Melia. Oebalus has no doubt that Apollo wants Melia as his wife and Melia is eager to accept him. They wait for the return of Apollo, who is playing discus with Hyacinthos and Zephyros

Then Zephyros enters with the news that Hyacinthos is dead, hit by a discus thrown by Apollo. Of  course Oebalus and Melia are upset, a marriage with Apollo is now out of the question. Zephyros, in an aside: What’s this I hear? Is the god considering marriage? Is he bent on stealing my beloved Melia from me? Will he who stole Hyacinthus also snatch her love from me?

Oebalus asks Zephyros to go back to Apollo and tell him that he is banished from the kingdom, but Zephyros replies that Oebalus better tells Apollo himself. Again in an aside: If only he expels him, so that my crime can be hidden, for I am the one guilty of committing the murder. Oebalus leaves. Zephyros again:  Everything is going as I wished, my plot is working, and my beloved Melia now remains to be my bride.

Zephyros tries to convince Melia that Apollo is bad and that she better can choose him. She is sad about her brother’s fate and refuses his advances.  Then  Apollo enters. He curses Zephyros who is transformed in a wind and swept away.

Melia is now even more furious, refuses to listen to Apollo’s explanation and banishes him from the kingdom.

Oebalus finds Hyacinthus still alive but dying. Hyacinthus tells his father that it was not Apollo but Zephyros who killed him. Then he dies.Oebalus swears to avenge Zephyros’ crime. Melia enters, still thinking that Apollo killed her brother. She tells her father that she banished the god who also killed Zephyros. Oebalus then explains that Apollo was right, because it was Zephyros who threw the fatal discus. Both are upset that the god will take revenge after being banished wrongly

Apollo enters, saying that his love for Hyacinthus made him return. He can not bring the boy back to life, but lets hyacinth flowers spring from his dead body. Both Oebalus and Melia apologise for the banishment, asking for forgiveness. Apollo promises to stay in the kingdom, hoping that Melia is still willing to become his bride. Oebalus gives his permission, saying:  Hyacinthus is dead: you will be for me another Hyacinthus, if you deign to remain in our land as husband of my daughter.

The opera ends with a terzetto, sung by Apollo, Oebalus and Melia. Oebalus sings: “After furious battles, the joyful pledge of love unites you. After these events decreed by fate, the longed-for marriage torch will crown you and inspire me”.

Some comments, mainly about Zephyros

I hope you will agree that Widl has managed to eliminate thoroughly the theme of the original myth .. 🙂

Let me conclude with some details about the soloists. The parts of Oebalus and Melia are sung by a tenor and a soprano. Those of Apollo and Zephyros by countertenors. The part of Hyacinthus is sung by Arno Raunig, a sopranist , a male soprano. LIsten to him, singing Bach’s Ave Maria.  Four years ago I have published a post Countertenors and castrati, where you can find more information about male altos and sopranos..

There is a very simple reason why Mozart wrote his opera for these voices. During the first (and during Mozart’s lifetime only) performance, all parts were sung by boys! They were students and choristers of the Salzburg University and we actually know their names (and ages)

Even the part of Melia is sung by a boy soprano.

Are you curious how this first performance might have looked like? In 1983(!) a television recording has made of the opera, with soloists from the Tölzer Knabenchor. The quality of the recording is not that good, and the YouTube video is split in eight parts, so I have created a playlist. Here it is:  Apollo et Hyacinthus .

To give you an impression, here is a better quality video of Melia’s aria, sung by boy soprano Alan Bergius. In this aria she sings how happy and proud she is to become the bride of the god Apollo

Immediately after this aria Zephyros enters with the message that Apollo has killed her brother.

By the way, the part of Zephyros is sung by Panito Iconomou, who, two years later, excels in Es ist Vollbracht . (St John’s Passion under Harnoncourt)

I have written this blog with more than usual pleasure and I hope the reader will enjoy it.

As is often the case with YouTube music videos, they can easily disappear, often because of copyright issues. The above link to Melia’s aria is broken. But the full 1983 recording is available, for the time being.