When Aric and I visit the Netherlands, we always try to combine it with a short trip to another European country. In 2014 we have visited Norway, and in 2016 Portugal. This time we went to the Languedoc region in Southern France. We wanted to visit the famous “village naturiste” of Cap d’Agde, in combination with some of the numerous historical towns in the region, like Arles, Avignon, Carcassonne.

We took a flight from Amsterdam to Montpellier, where we rented a car. The map below gives the places (in red) where we stayed overnight. To guide the eye I have connected the different locations with blue lines, the actual roads were of course winding and much longer..:-)

Our first stop was in Nîmes where we stayed three nights in an Airbnb. A nice apartment, on walking distance from the historic center, only a bit difficult to find a parking place.

After arriving in the apartment, I discovered that I was missing my passport and driving license! Searching my luggage and the car, nothing. Panic! Could I have dropped it when I entered the rental car? A telephone call to Avis in Montpellier finally gave the solution, they apologised that they had not given back the documents after photocopying them! Of course it was my fault not to have asked them back, but what a relief.

After this commotion we went out to explore the town a bit. Nîmes was an important regional capital during the Roman Empire

We were not in the mood to look for a restaurant, so we bought food in a nearby Carrefour supermarket and had a drink on our own balcony followed by a microwave dinner, Brandade de Morue, a typical Nimois specialty . 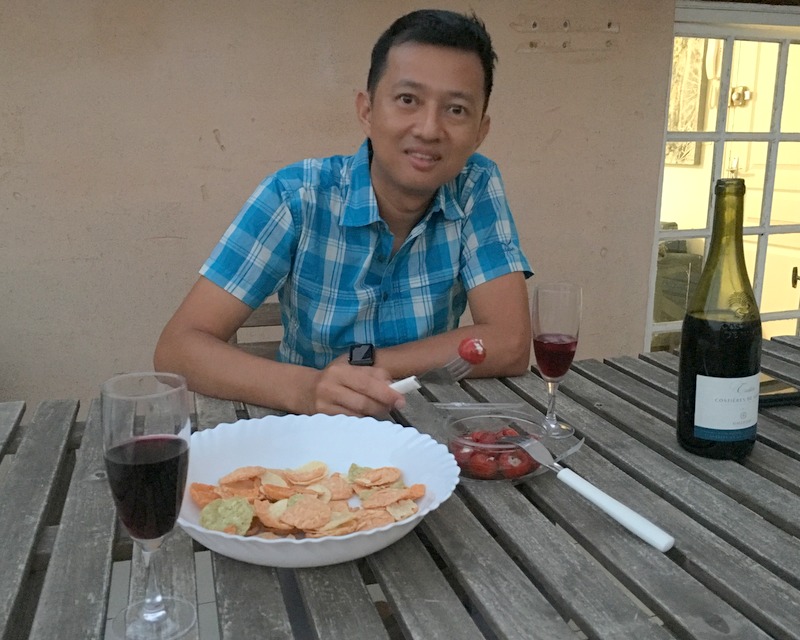 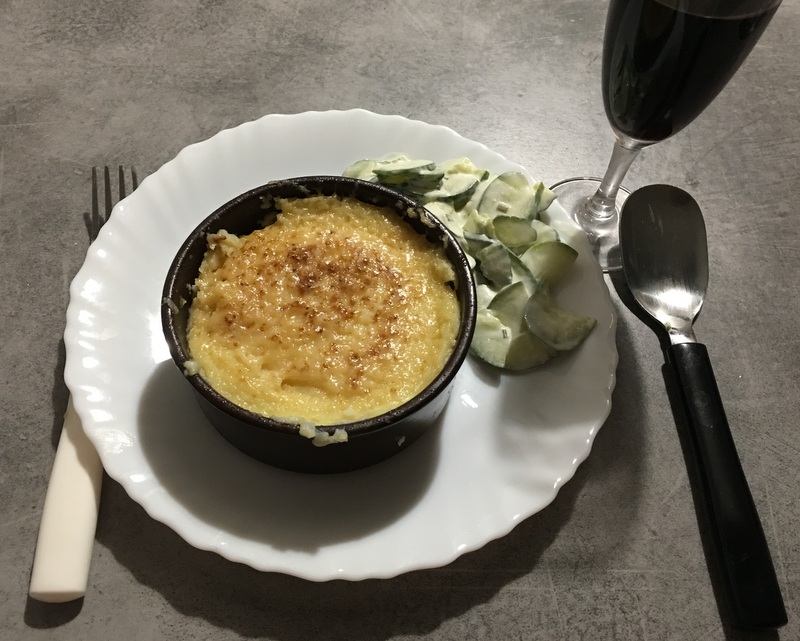 The next day our destination was Arles, but first we had to go back to the airport to collect my documents. From there we drove to Arles through the Camargue and on our way we found a very nice place for lunch, le Resto de Paty. Isolated location, we wondered if it was open, but it was , friendly service. We had tellines as a starter, a kind of clams, similar to the Malaysian lala. The main dish was grilled Camembert with charcuterie , delicious but filling 🙂  Really a lucky find!

You can easily spend days in Arles, but we had only a few hours. Fortunately we could park near the center. Here is a GE view, with the places we visited. 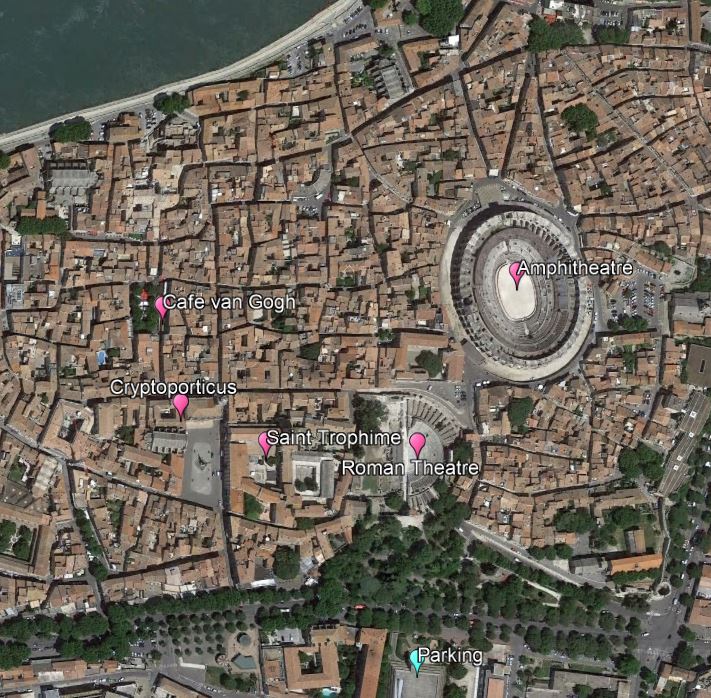 The Roman theatre was built in the 1st century BC and is one of the oldest stone theatres in the Roman world.. It is used now for concerts and events, which rather spoils its visual appearance. 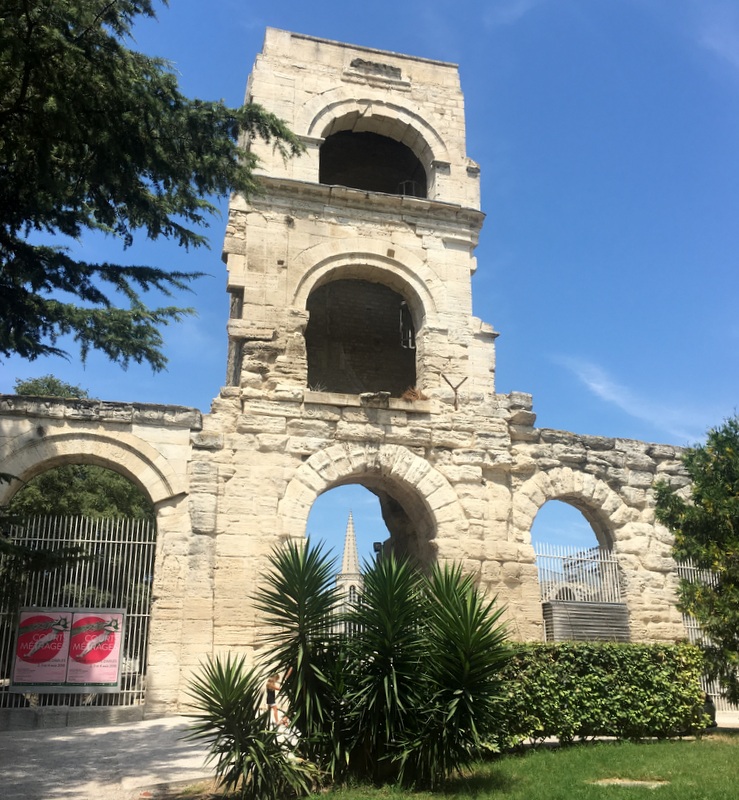 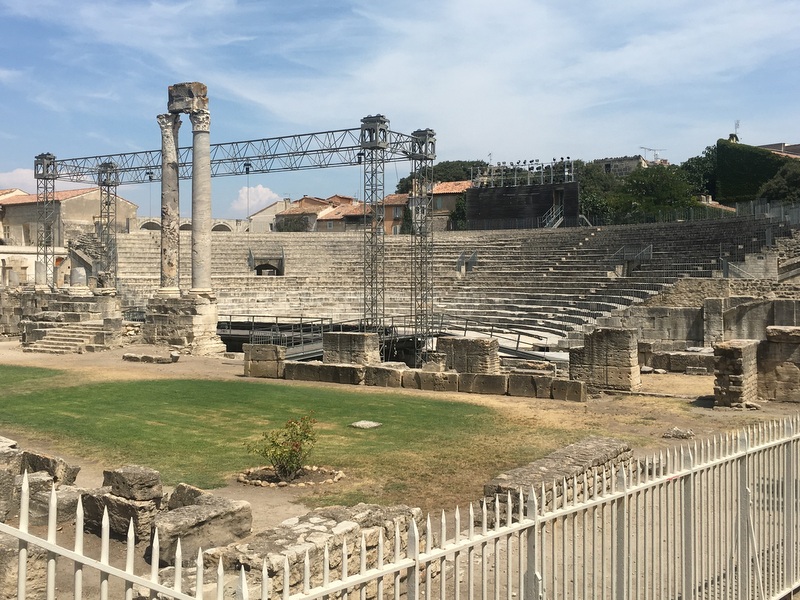 Much more impressive is the amphitheatre, built in 90 AD and capable of seating over 20.000 spectators. In Roman times it was used for chariot races and gladiator fights, nowadays for bullfighting and concerts. 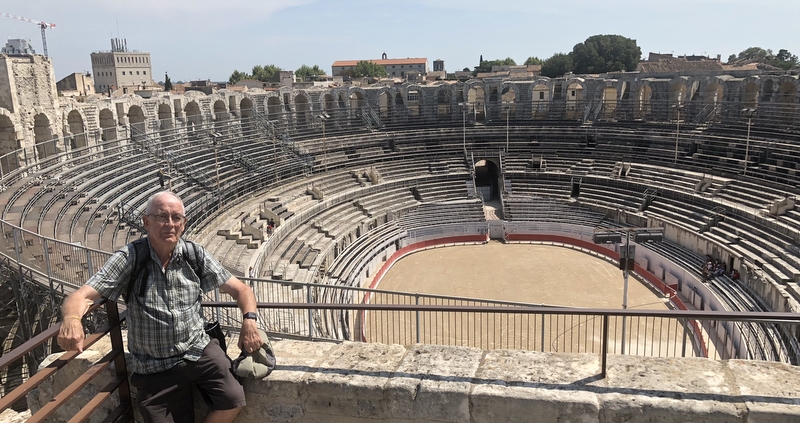 One of the (medieval) towers

View from a tower

Many visitors will come to Arles because van Gogh lived there more than one year and created some of his most famous paintings. Through narrow streets we walked to the Place du Forum, with the cafe, painted by van Gogh.

Here is the painting (1888) and the cafe, where I had a lousy ice coffee for a ridiculous price. To be avoided!  I hope you will understand why I cover my ear…:-) 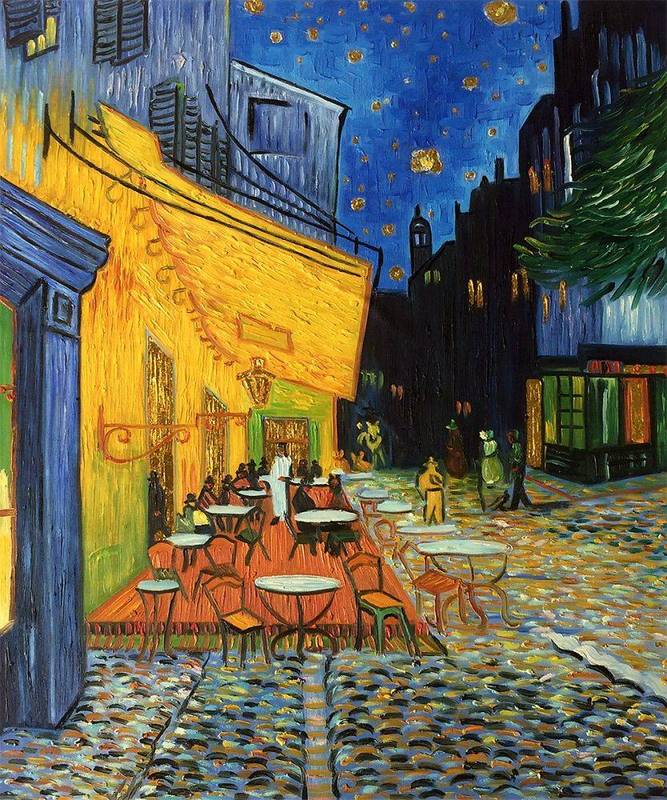 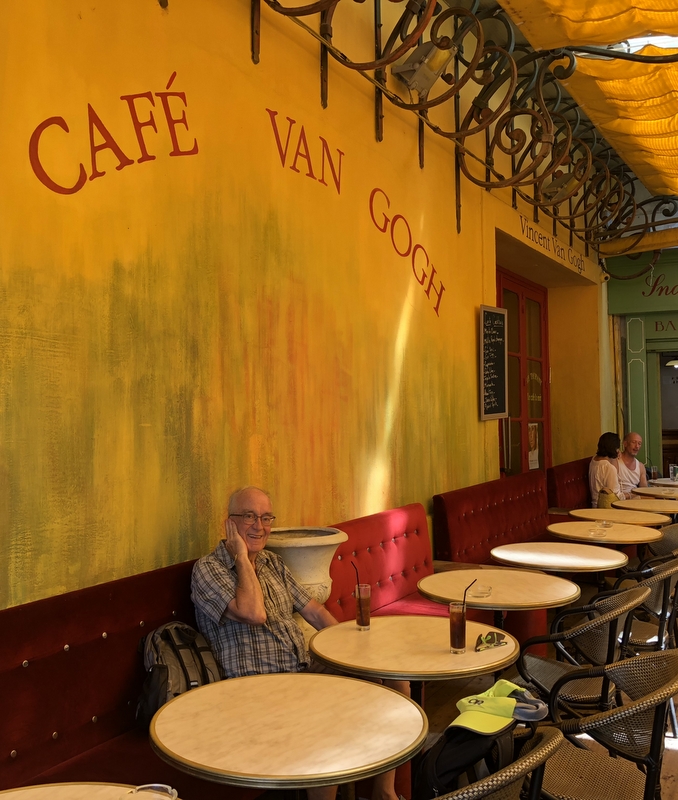 Our last destination in Arles was the Saint Trophime church, but on our way we passed the entrance of the Cryptoporticus, and we visited this intriguing foundation of the former Roman Forum first. Crowds of tourists in Arles, but this place was deserted. I loved it! 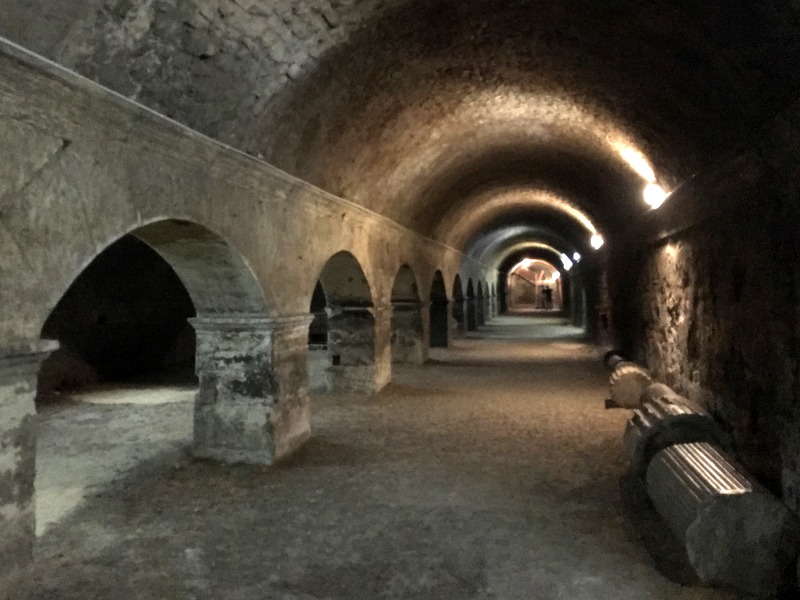 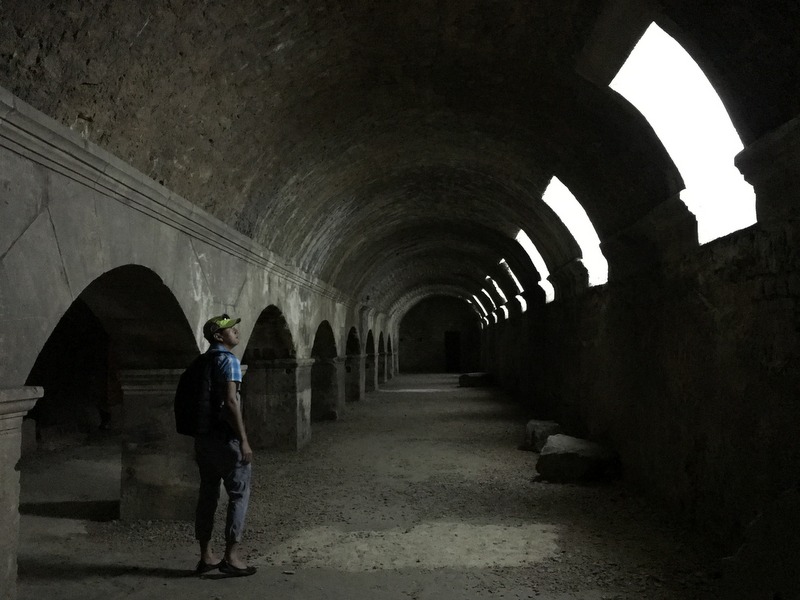 Saint Trophime was built between the 12th and 15th century  and is famous for its cloisters. 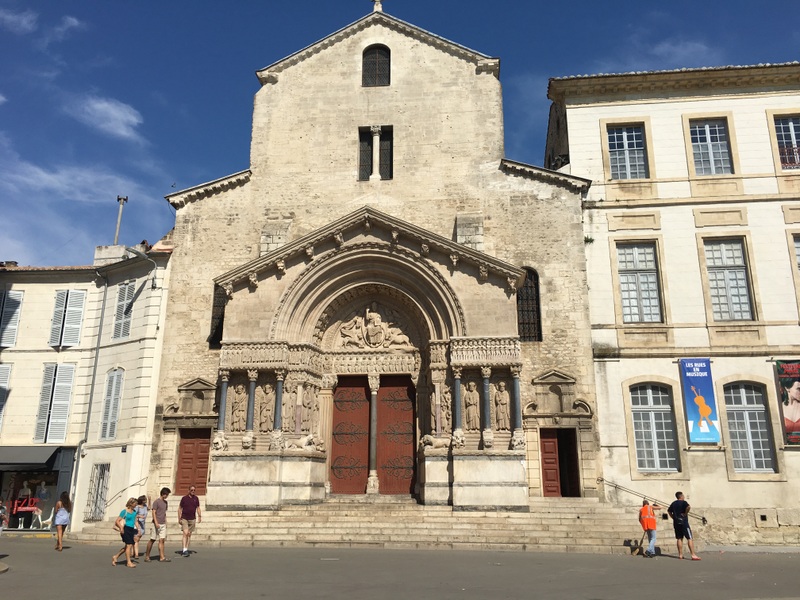 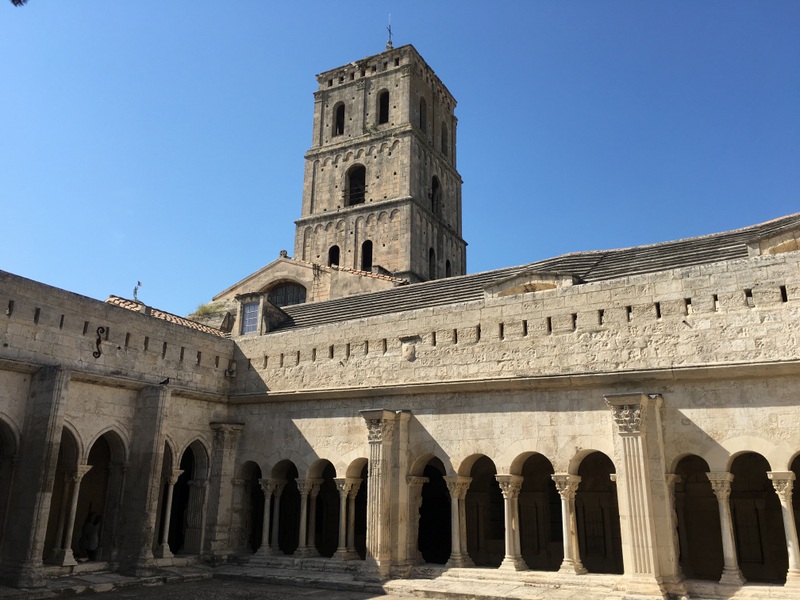 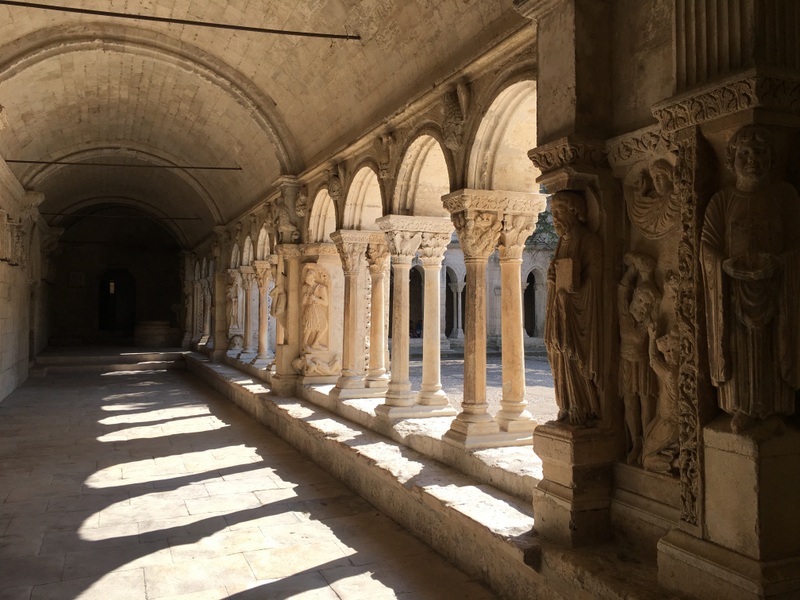 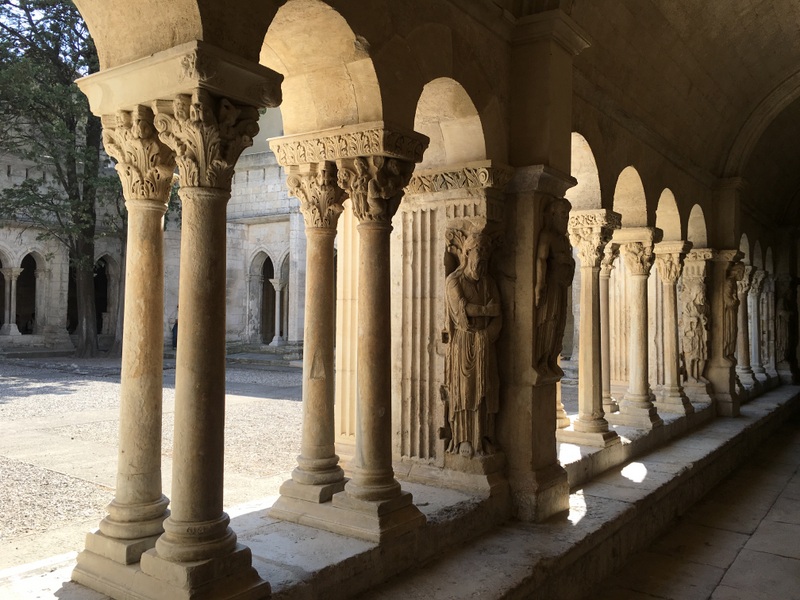 Some details of the columns, fine examples of the Romanesque style, and a photo of the church interior.

It had been a long and very hot (38 °C !) day. Before going back to Nîmes, we relaxed for a while on the Place de la Republique, with a 4th-century Roman obelisk in its centre.

The following day we visited Avignon and it was even hotter.(38 °C). Probably almost everyone will associate Avignon with the famous children song  Sur le pont d’Avignon but the real importance of the town is because it replaced Rome as the seat of the Pope in the 14th century, the Avignon Papacy . The Palais des Papes is what remains of those turbulent times. It is one of the largest and most important medieval Gothic buildings in Europe. More of a fortress than a palace, here is an overview taken from Wikipedia to show its size. Bottom left you can see the beginning of the Pont d’Avignon.

Because of the hot weather we limited ourselves to the bridge and the palace. Here are my own photos. In the top left picture you see the cathedral of Avignon with the prominent statue of the Virgin Marie on top of the belltower. Notice the massive fortifications. The bottom right photo shows a door in the palace. Enlarge it to see the damage that has been done to the statues. 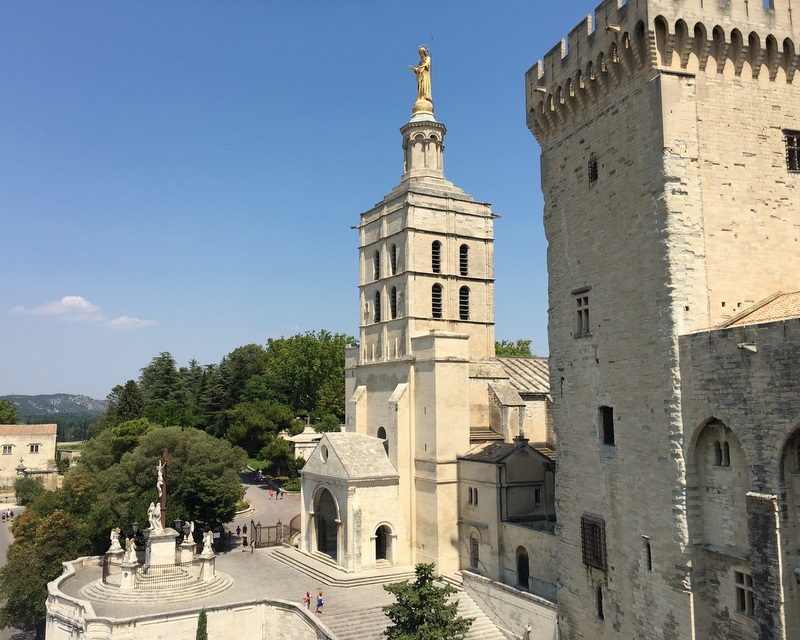 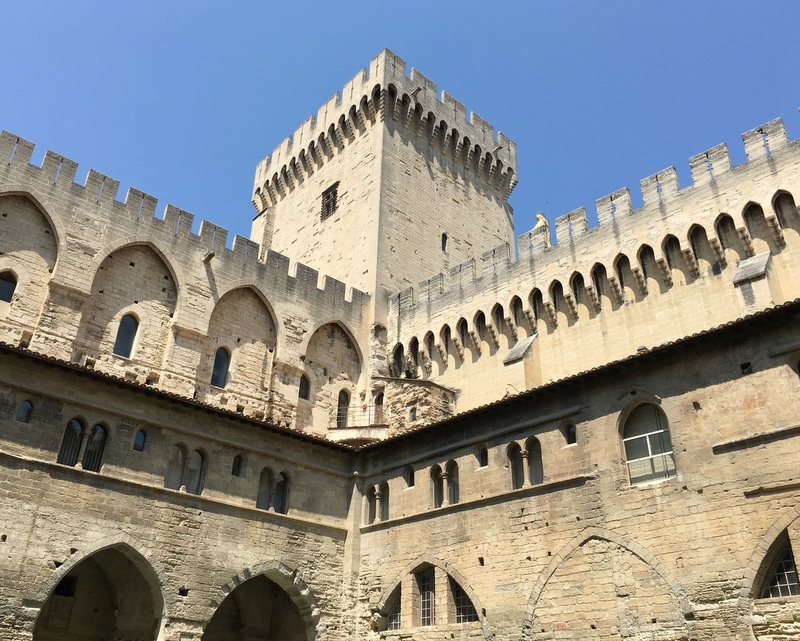 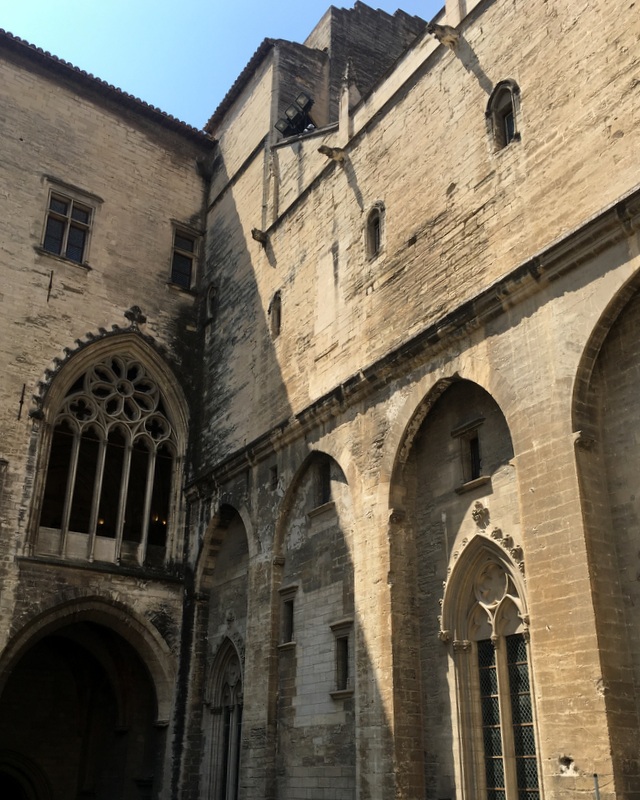 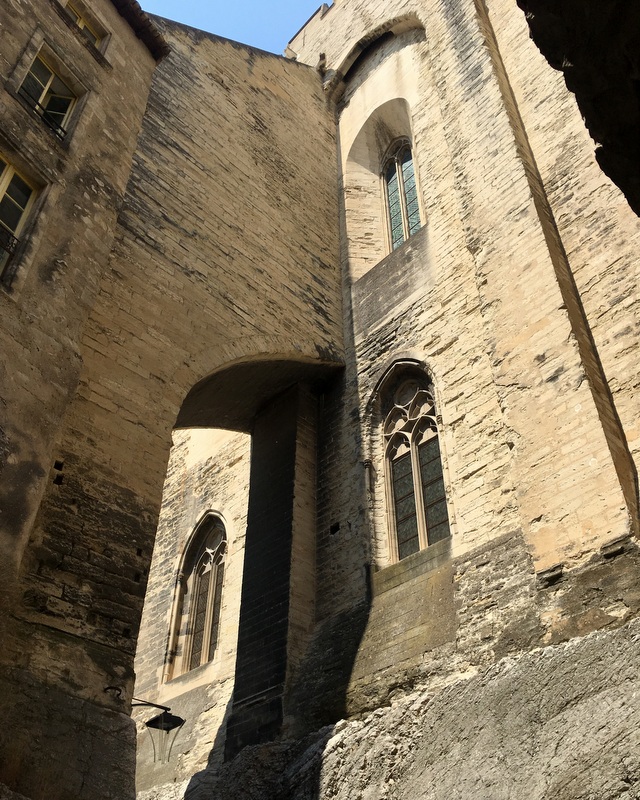 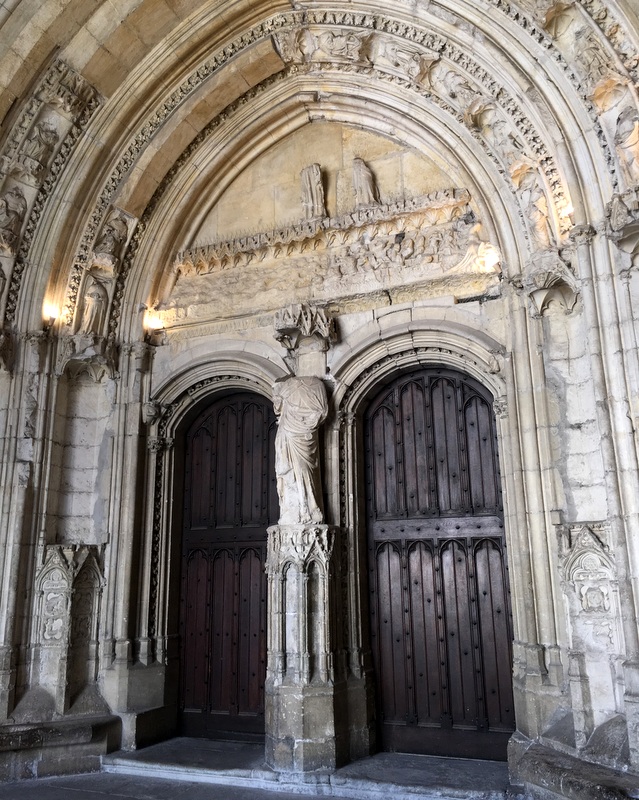 And here are pictures of the interior. You can easily spend many hours here. 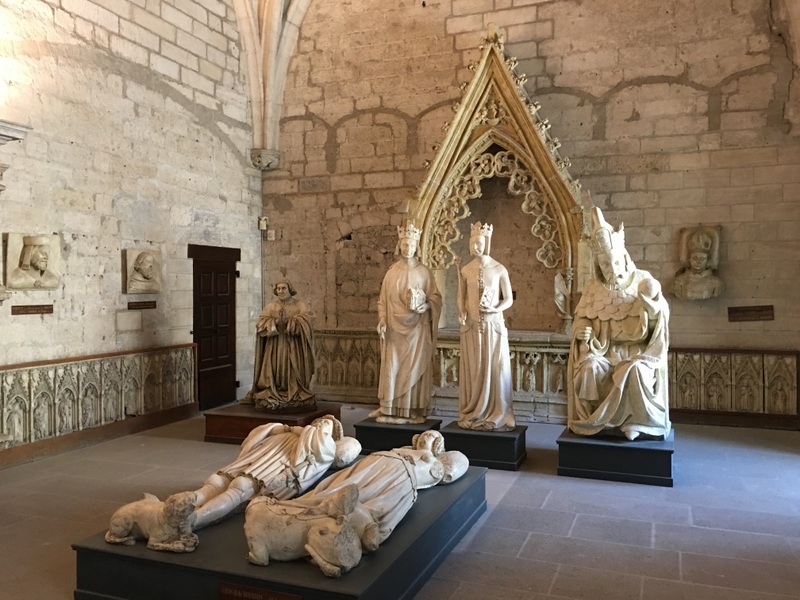 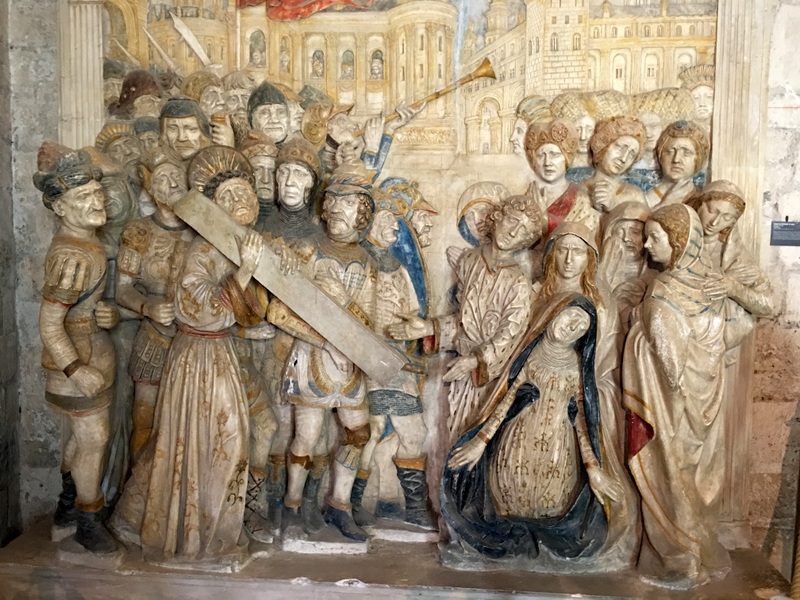 Here is the famous  Pont Saint-Bénézet, which is the official name of the Pont d’Avignon. To take this picture we crossed the Rhone river. The bridge was built in the 12th century and had originally 22 arches of which nowadays only four remain. In 1995 the bridge, together with the palace and the cathedral were declared  Unesco world heritage sites.

We walked across the bridge , but it was too hot to dance…:-)

On our way back to Nîmes, we visited another Unesco world heritage site,  the famous Pont du Gard. It is an ancient Roman aqueduct, built in the first century AD to bring water to the town of Nîmes.  It is the highest of all elevated Roman aqueducts and really impressive. 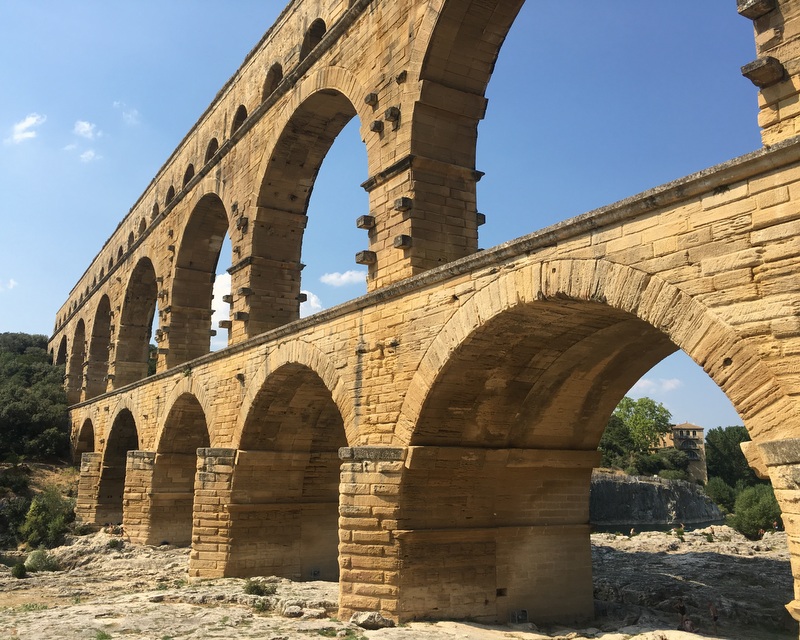 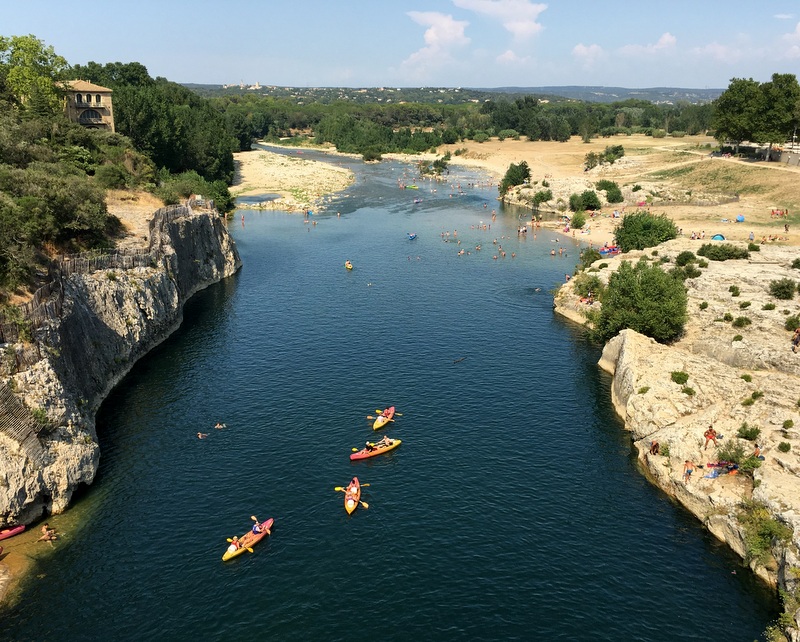 Back in Nîmes, we decided to have a real French dinner. We walked to the Place aux Herbes, with many eateries, and had our dinner in restaurant O-Delice. Nice food 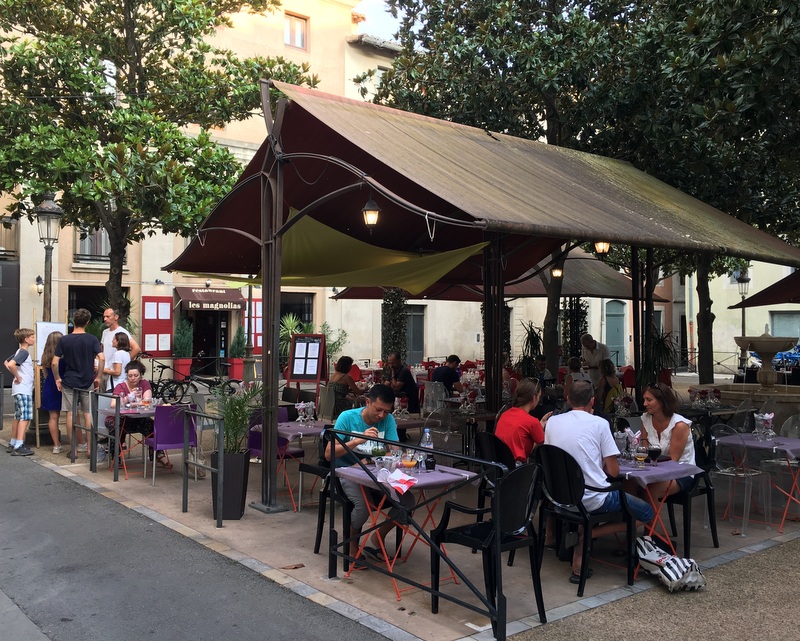 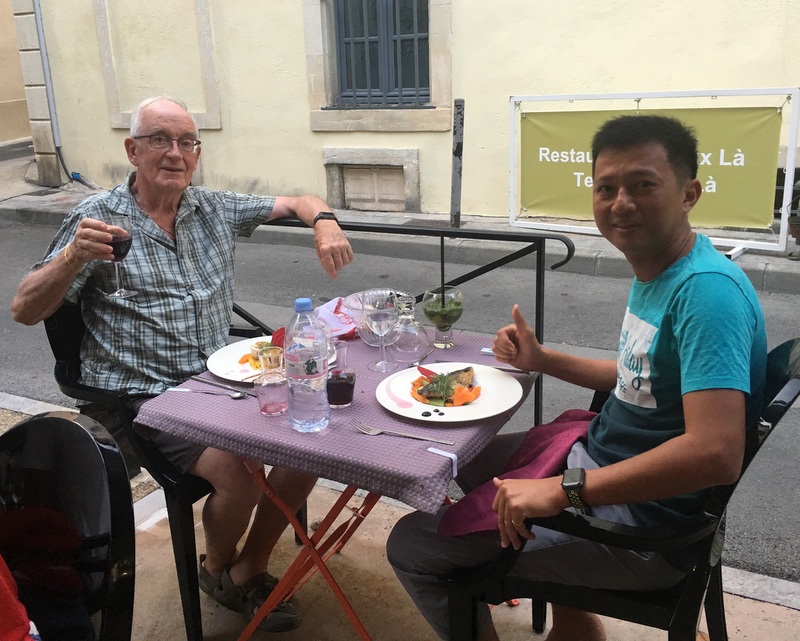 It was still very hot

After our dinner we walked back to our apartment. Nice atmosphere, it was a Saturday evening, big crowds everywhere.

Although we had chosen Nîmes only as a convenient location to visit Arles, Avignon and the Pont du Gard, we discovered that the town itself has also many interesting places. Before leaving next morning, we visited two of them.

First  the Halles de Nîmes. It is considered a major tourist attraction, but for somebody used to the Central Markets of Asia, it was a bit disappointing. Lots of fresh food of course, always nice to take pictures.

The Jardins de la Fontaine are a public park, established in the 18th century around a water source. In Roman times this was the center of Nîmes, ruins of the so-called Temple  of Diana (not a temple, probably a library) and the Tour Magne can still be seen.

Our next destination was Robiac, a small village north of Nîmes. Why did we go there? That will be explained in part II of this blog.