One year after the infamous Bukit KIara fencing project was brought to a halt by then Housing and Local Government Minister Datuk Seri Chor Chee Heung, the Friends of Bukit Kiara (FoBK) received a letter from Jabatan Landskap Negara (JLN) that the fence would be completed, instead of removed…:-(

Again a protest march was organised, the third one, on 28 September 2013. I could not attend as I was traveling in Europe. According to a STAR report more than 2000 people took part in this peaceful demonstration 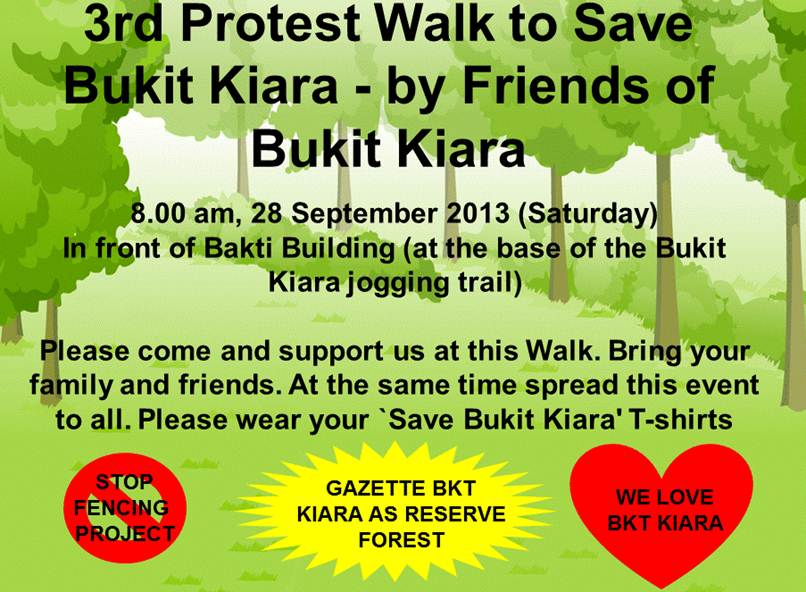 Did the walk have any positive effect? Not at all. Soon the bulldozers started again, trees were felled, access roads created, forest destroyed. This part of the fence is separating Bukit Kiara from the Sprint highway. Only bikers come here, they noticed that several of their trails were blocked and/or destroyed. 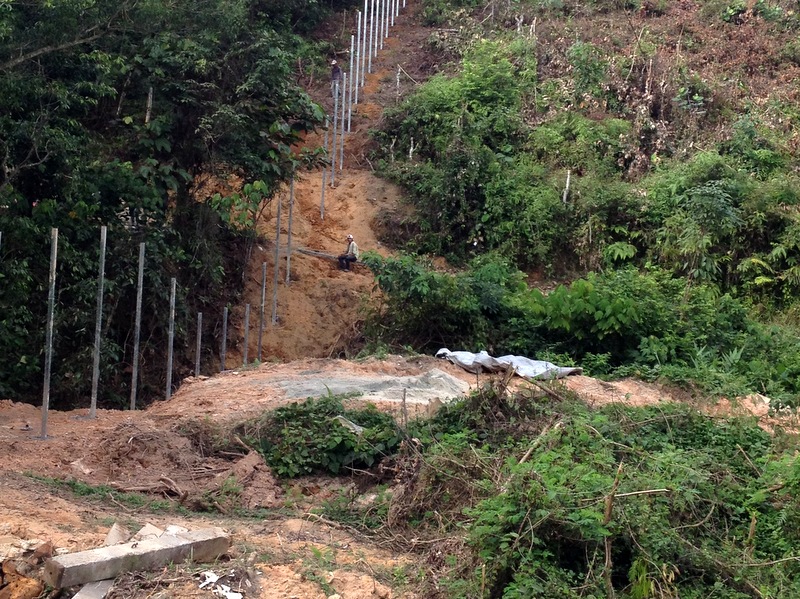 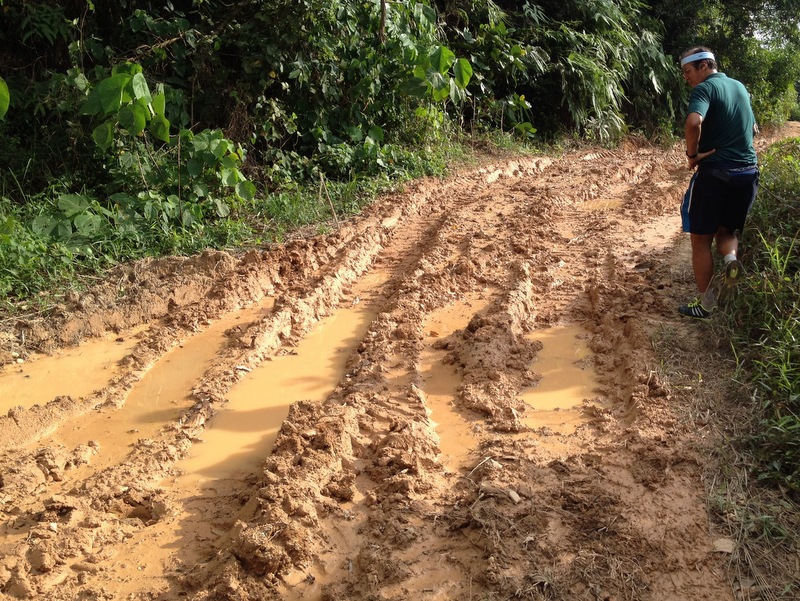 Here is a map of Kiara with the fence. Thanks to TRAKS. The yellow part has been recently constructed. As you see, there is a tiny part of the park fenced in between the highway and the plot leased by Berjaya. 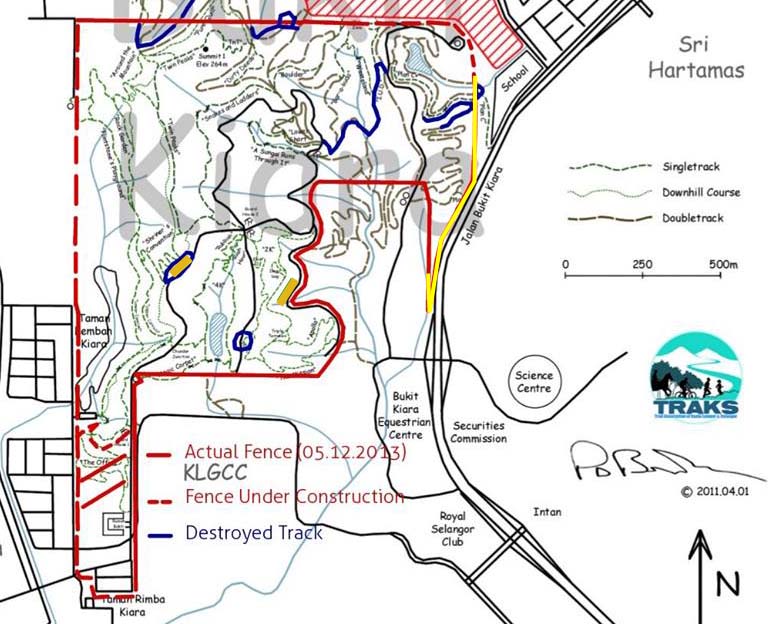 In an earlier blog, called Birdbrains? , I had already explored this location, after the work was stopped. Here is a picture from that blog, showing that they were really planning to build the fence in this moronic way. 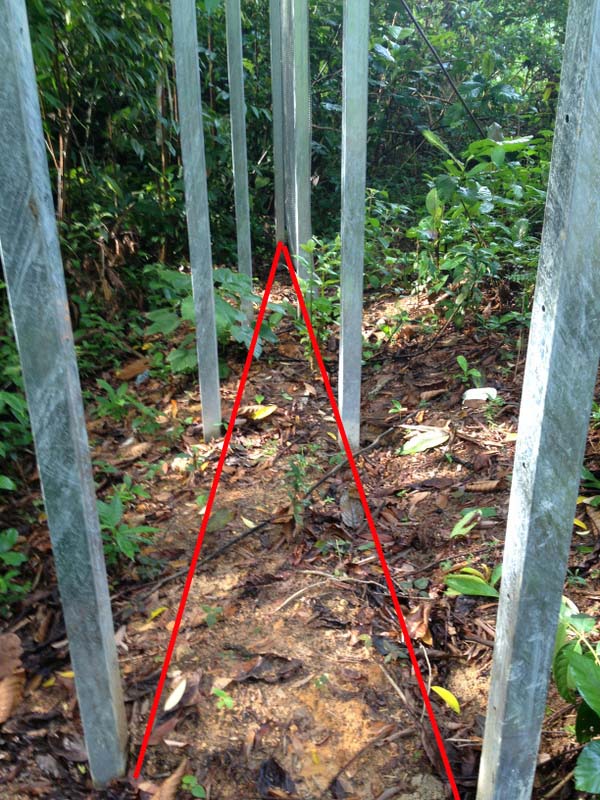 Now that this part of the fence has been completed, I was of course curious to see if JLN had really continued this folly. They did, this is what I found 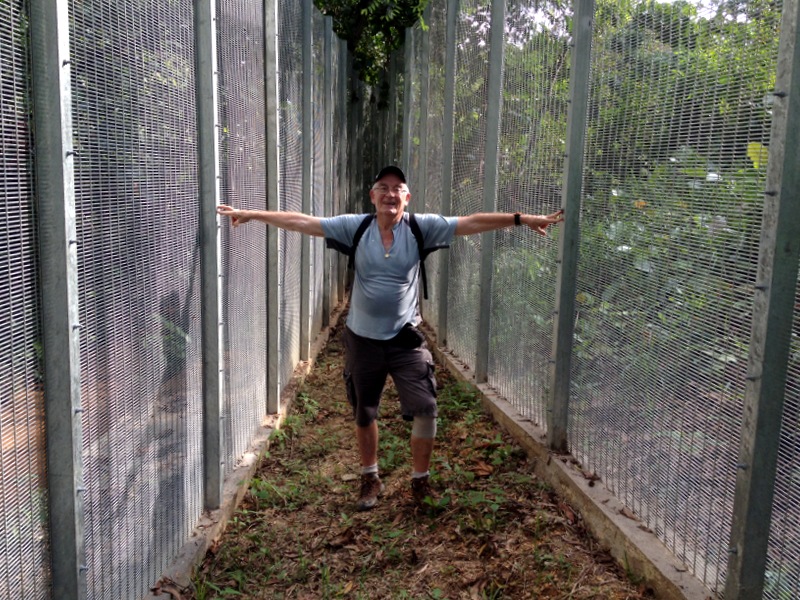 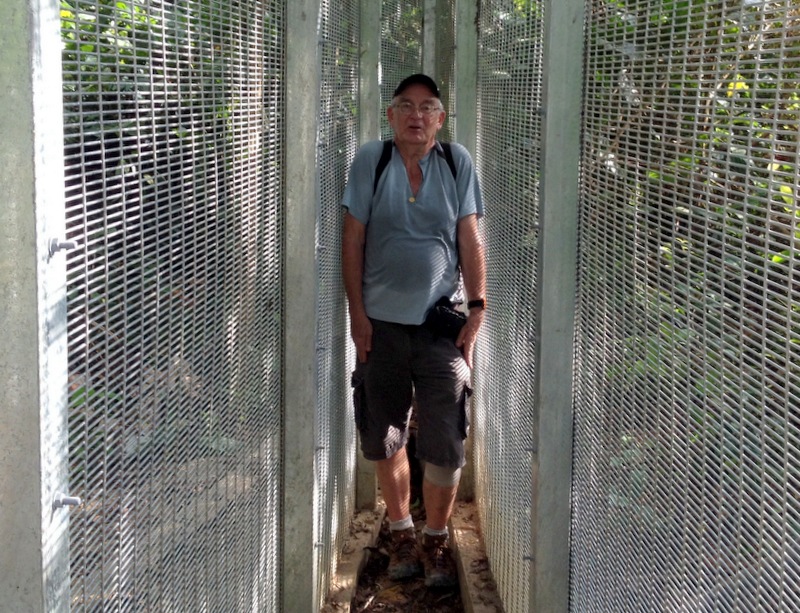 Here are a few more pictures, taken recently during a hike with Dr Pola Singh.

Exit to the highway

I recorded our GPS track with EveryTrail: 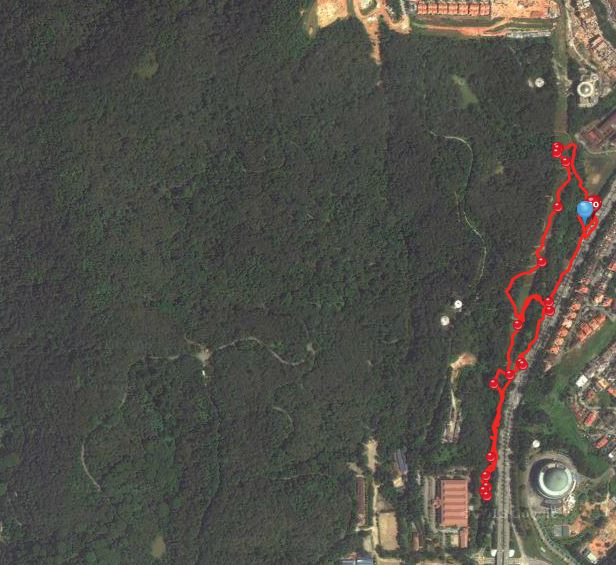 Each red dot represents a picture

We started at the Sri Hartamas school

On our way back we went through the small gate and walked along the highway back to our car.

Personally I think that the fencing issue is a lost cause. JLN is not interested in any form of cooperation with the people who are using and loving Bukit Kiara.

More is happening these days. Bukit KIara is hilly, with some steep slopes along the access roads. Sometimes (minor) landslides happen. Like for example this one, last year, a relatively big one. 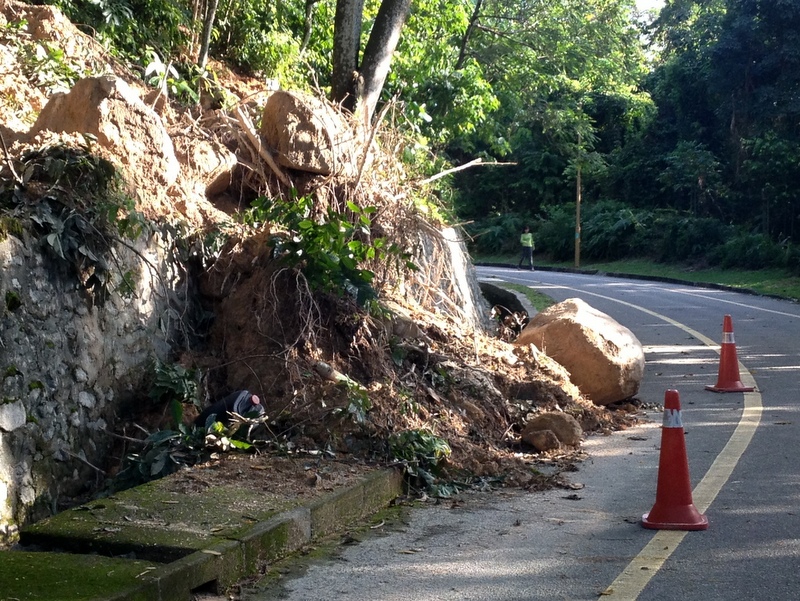 A few weeks ago JLN decided to solve this problem in a shocking, “maximal impact” way. Here are two pictures of the present situation. They call it slope reduction. Sarcastic comments galore: “If there is no landslide, JLN will create one” , “the rape of Bukit Kiara“, etc. 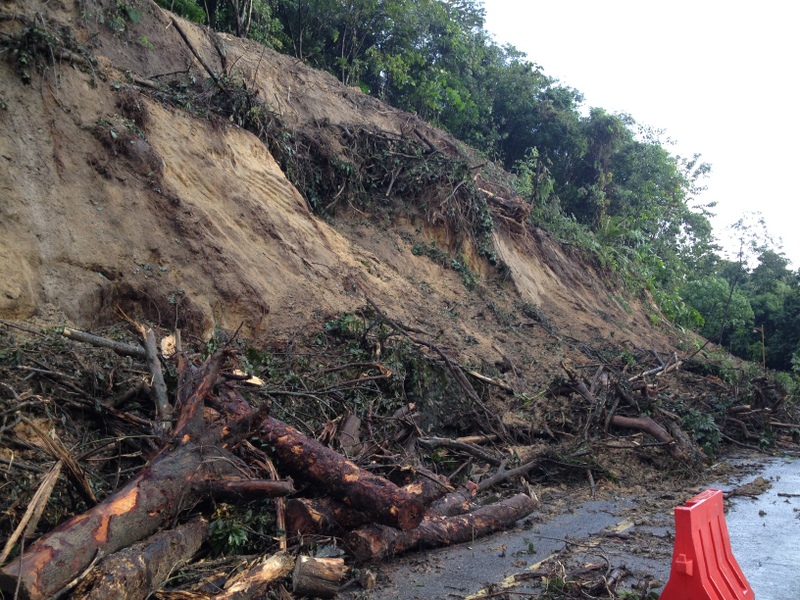 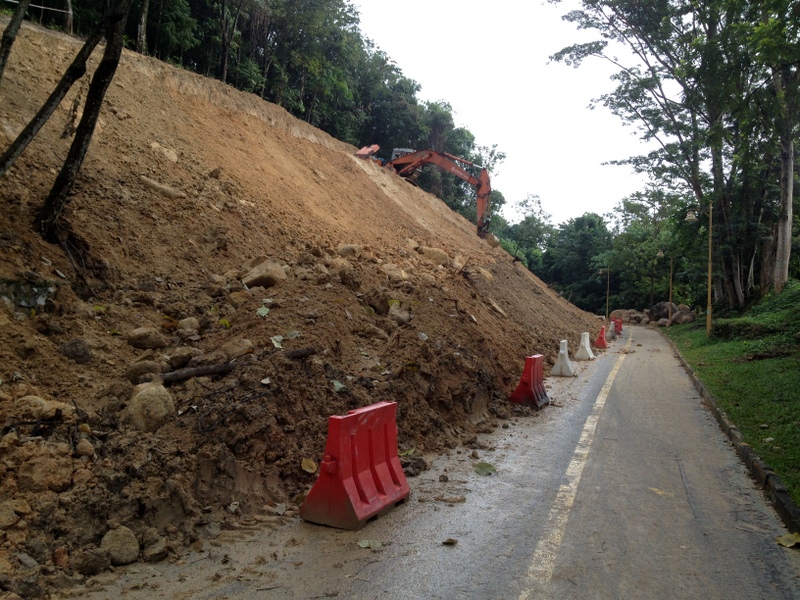 The location where this “rape” is taking place, is indicated on the TRAKS map above in a brown color. This is the left one in the map. JLN must have been so happy with the result, that they have created a second one, along the tar road leading from the crossroads to the Equestrian club. 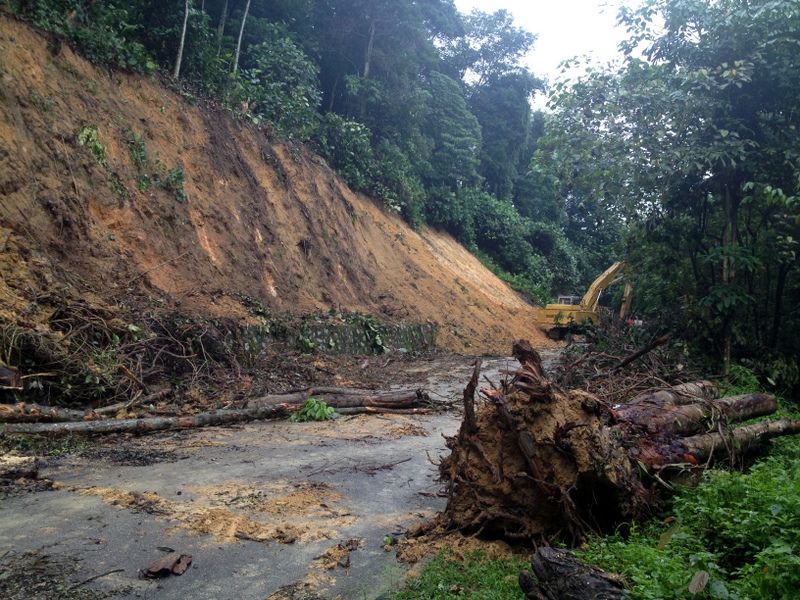 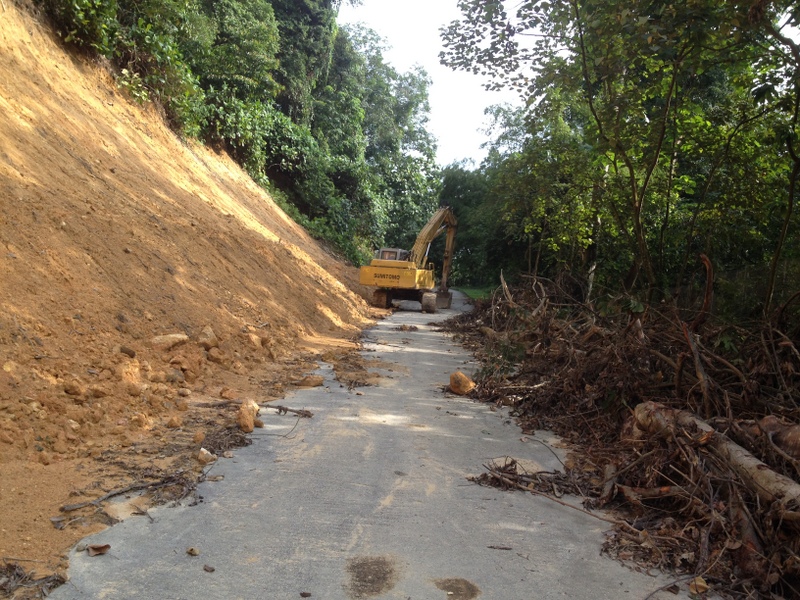 There are many similar slopes in Bukit Kiara, so the rape may go on. Felling the trees at this second “landslide creation”, one of the trees damaged the fence at the other side of the tar road. Divine justice? 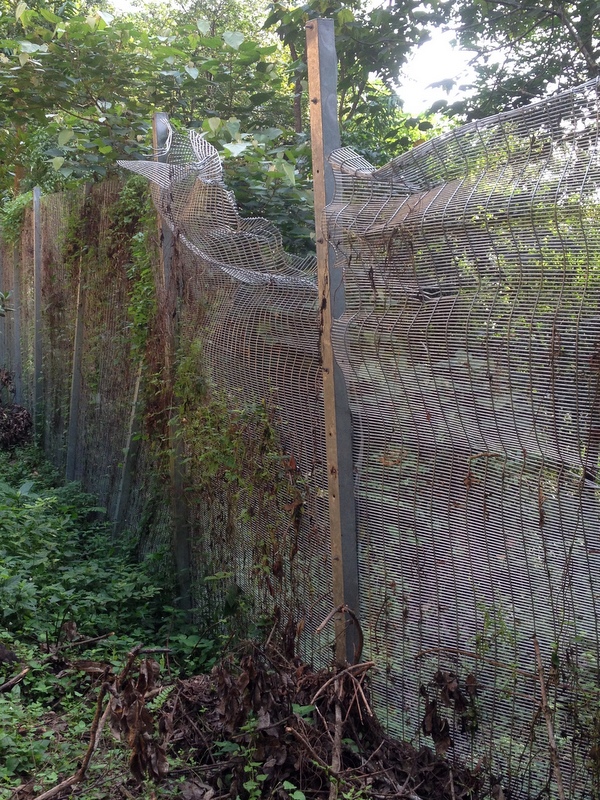 This may give some hope for the future. I have seen more locations where fallen trees have damaged the fence.

As usual in Malaysia there is money available to build something, but no money is reserved for maintenance. If that is the case here, slowly the fence may disappear (maybe sometimes helped by volunteers, haha).

If you want to get regular updates about the Bukit Kiara situation, you should go to the TRAKS FB page and “like” it. Or visit their website.

You may have recognised the “Not All Is Well” in the blog title as a quote from Hamlet. In Shakespeare’s play, Hamlet continues: I doubt some foul play

5 thoughts on “Bukit Kiara: Not All Is Well”