In 1945, with the WWII coming to an end, the Japanese Imperial Army forced the prisoners of war (POW), kept in the Sandakan POW camp (Sabah), to march from Sandakan to Ranau, over a distance of more than 250 km. Many of the POW’s died during these marches, by disease or starvation. If they were too weak to follow, they were killed by the Japanese guards and left behind. As a result nobody survived these marches, except six, who managed to escape. These marches are now known as the Sandakan Death Marches.

I had never even heard about it, when I visited my friend Joe Yap in Sabah, a few weeks ago. Neither had she, nor many of my Malaysian friends which I questioned later. On our way to Sandakan, after enjoying spectacular views of the majestic Kinabalu mountain from the Kundasang cow farm, Joe asked me if I would like to visit a nearby War Memorial. A war memorial, I asked, what happened here? 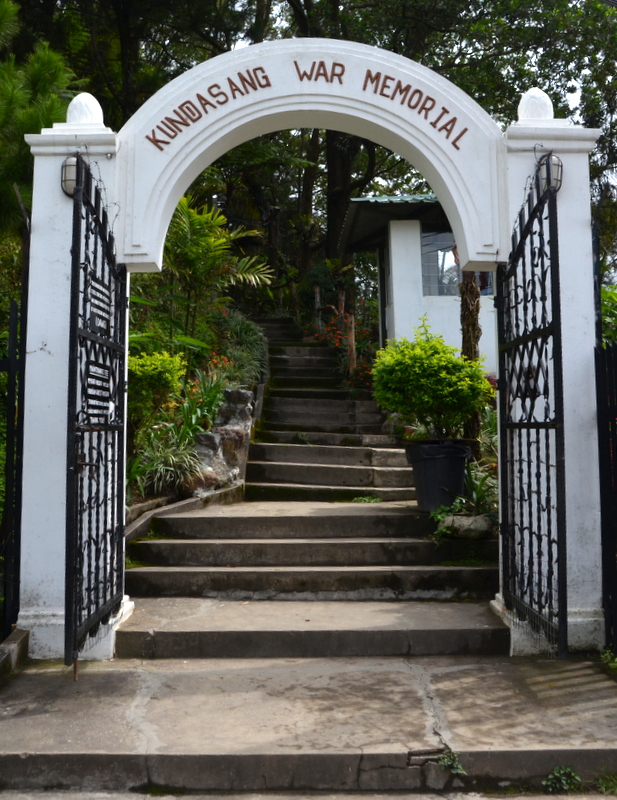 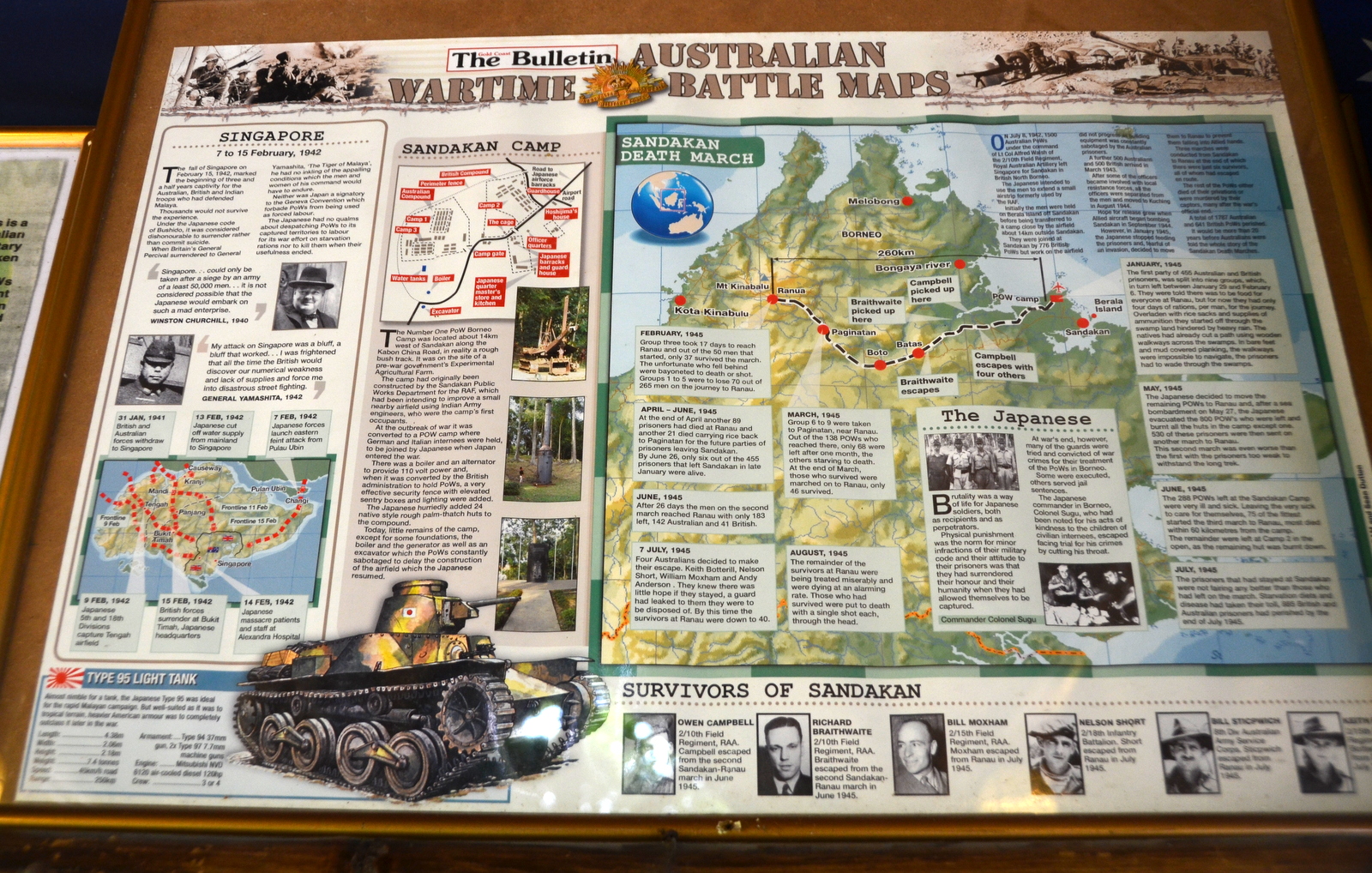 We entered and there was this signboard, full of information. After reading it, we were hooked and decided to adjust our traveling program in such a way that we could learn more. In the report about my Sabah trip you will find more details and pictures

Here is background information about the Sandakan Death Marches.

When Singapore fell, 15-2-1942, thousands of Australian and British soldiers were taken prisoner of war by the Japanese. In 1942 and 1943 they brought  about 2700 Australian and British POW’s to a camp, about 8 miles from Sandakan. They were used as a labour force to build a military airstrip. The location of the camp is shown in the map below. It is now the Sandakan war memorial.The military airstrip has become the Sandakan airport. 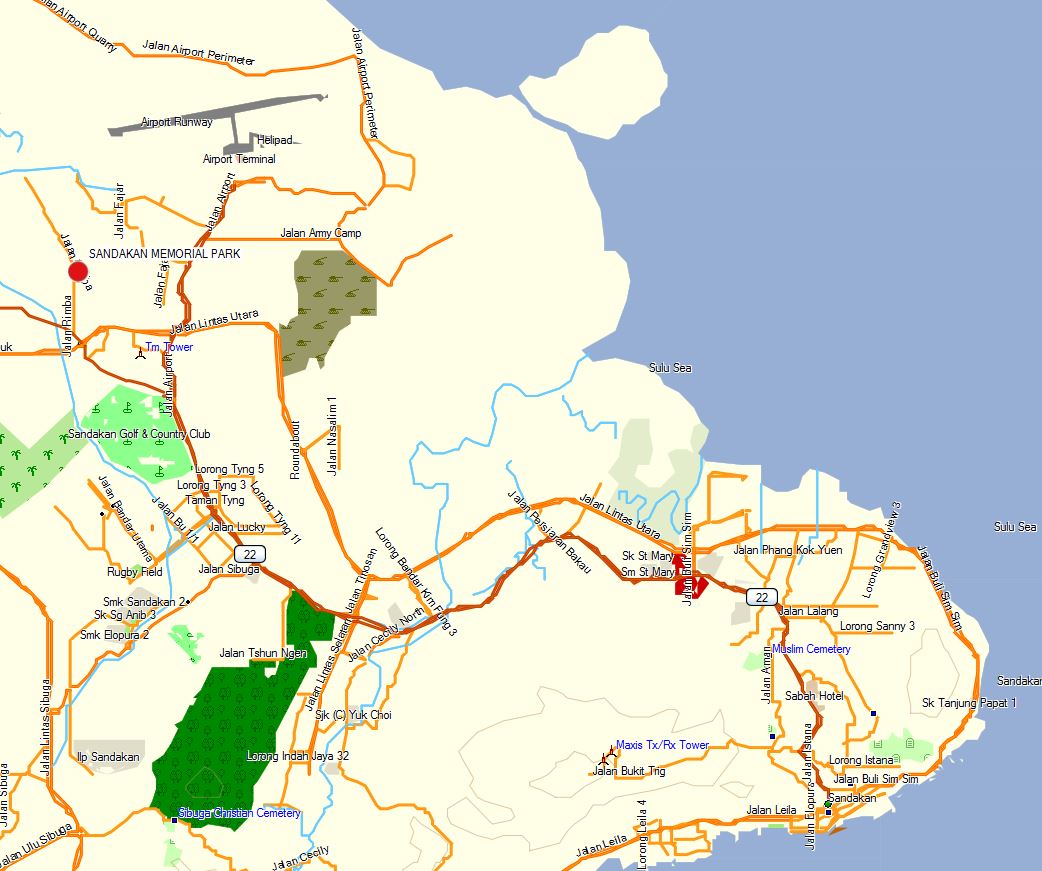 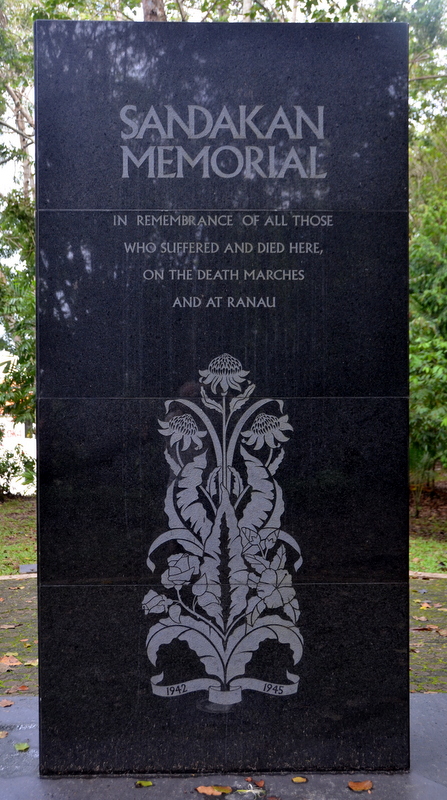 In the beginning living conditions were more or less acceptable, but throughout the years they deteriorated, with heavy punishments and cruel torturing becoming the order of the day. Many people died or were executed in the camp. When it became clear that Japan was loosing the war, the Japanese High Command ordered that the POW’s should be taken to Ranau, on the slopes of the Kinabalu. At that time (beginning of 1945) about 1900 POW’s were still alive. A trail was prepared through the jungle and the swamps and in January 1945 a first group of 470 men started the march. Here is the route they took, the black dashed line. The modern main road is in red.

The men were selected because they were relatively fit. They had to carry heavy loads and did not get enough food rations, so many of them died on the way, through illness or exhaustion. If they were no longer able to follow the group, they were killed or left to die. The ~250 survivors who were able to reach Ranau, had to build a camp, where the conditions were even worse. When the next group arrived, in June 1945, they found only six POW’s still alive.

The second series of marches started on 29 May 1945 with approximately 536 prisoners, even less fit. Only 183 of them managed to reach Ranau. Two men managed to escape during the march, were helped by locals and eventually rescued. Another four managed to escape after arrival in Ranau. One of them was Keith Botterill, second from right in the picture. Next to him two other survivors.Read here his report 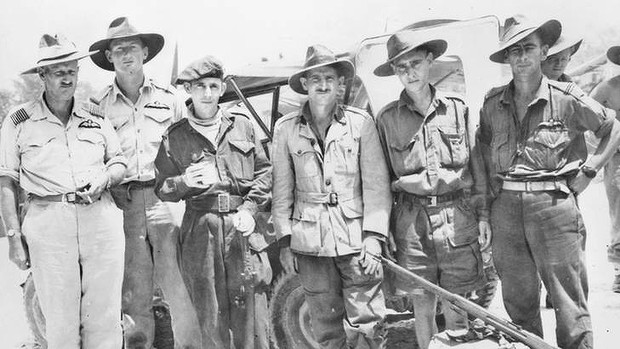 The approximately 250 people left in Sandakan were so ill that initially the Japanese intended to let them starve to death. However, on 9 June it was decided that 75 of them should  march to Ranau. They were so weak that none of them survived beyond 50 km from the camp.

The remaining POW’s died in Sandakan, by starvation, often executed by the Japanese, some of them even after the surrender of Japan, 15 August 1945.

Final count: 2428 POW’s died in the Sandakan and Ranau camps, or during the marches. Only six managed to escape and survived.

These days a lot of information is available about the Sandakan camp and the death marches, but that has not always been the case! In the aftermath of the war, the Australian Army has tried to keep the details of the Japanese war crimes outside the publicity. Officially  because they wanted to spare the feelings of the next-of-kin.

But there was more. The Australian Imperial Army was aware already in 1944 of the atrocious conditions in the Sandakan POW camp. A rescue operation was planned, operation Kingfisher , but by a combination of misinformation and blunders it came to nothing. The army wanted to keep this scandal covered. For many years it was not clear what exactly had happened and how bad it had been.

In 1998 the Australian historian Lynette Silver published a book; Sandakan, a conspiracy of silence.

In this book of almost 500 pages, she gives a detailed account of the situation in the Sandakan camp and the death marches, based on interviews with the six survivors and diary notes left behind by those who did not survive.

It is not always easy reading, but worth the effort and an impressive tribute to all those, often young, men, who perished.

Nowadays much more information is available.  The Australian Department of Veterans’ Affairs has published  a very readable report: Laden, Fevered, Starved , and doing a Google search for “Sandakan Death Marches” will give many more hits.

There are now even several travel agencies which offer Sandakan Death March trips Some of these agencies quarrel about what is the original death march trail, not so easy to determine after almost 70 years. 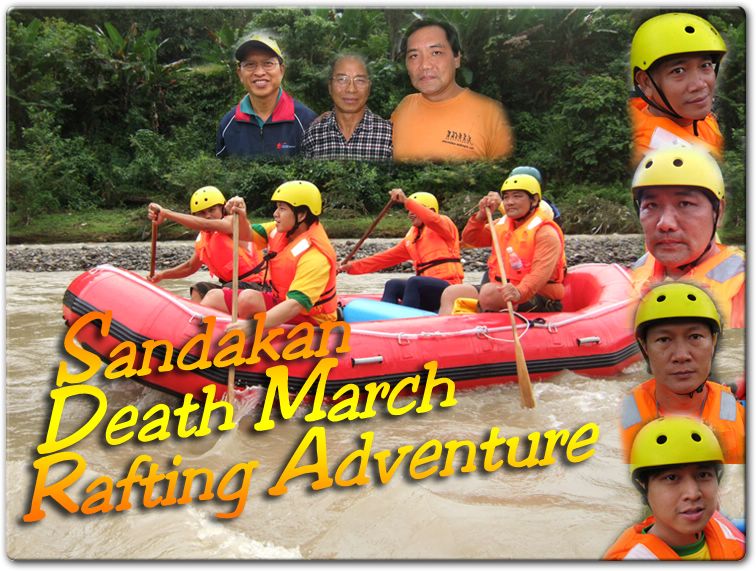 And what to think about this advertisement for a Sandakan Death March Rafting Adventure? With this introduction

“The Sandakan Death March Rafting Adventure begins with an inspection of the the camp site, followed by refreshments. ”

Strange and rather disconcerting, that this tragedy is being used for commercial purposes.

On our way back from Sandakan to Kota Kinabalu, we noticed several signboards, indicating the route of the Death March trail. Like this one near Quailey’s Hill, where 24 year old Allan Quaily was brutally murdered by the Japanese guards, when he had no more energy to continue the march. 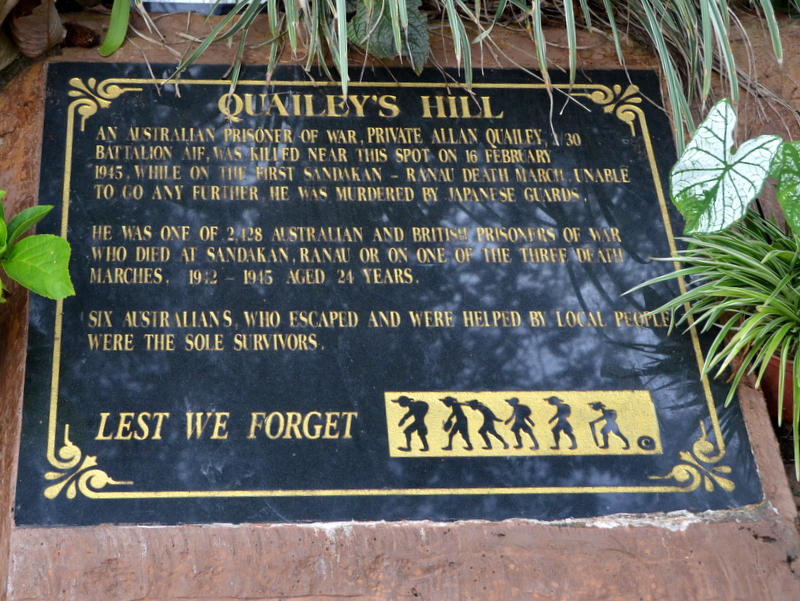 The surrounding landscape is so peaceful now. Difficult to imagine the suffering of those who marched and died here.

6 thoughts on “The Sandakan Death Marches”