Thaipusam is a Hindu festival, celebrated, mostly by the Tamil community, on the full moon day in January/February. The festival is dedicated to Lord Murugan, the son of Shiva and Parvati and it commemorates  the occasion when Parvati gave her son a spear (the Vel) to vanquish the evil demons. Years ago I had attended the celebration at the Batu Caves in Kuala Lumpur. This time I decided to go to Penang where Thaipusam yearly attracts hundred thousands of visitors.

Here is a characteristic Thaipusam picture. The devotee has pierced his cheeks and tongue with a miniature Vel and is carrying a Kavadi on his shoulders 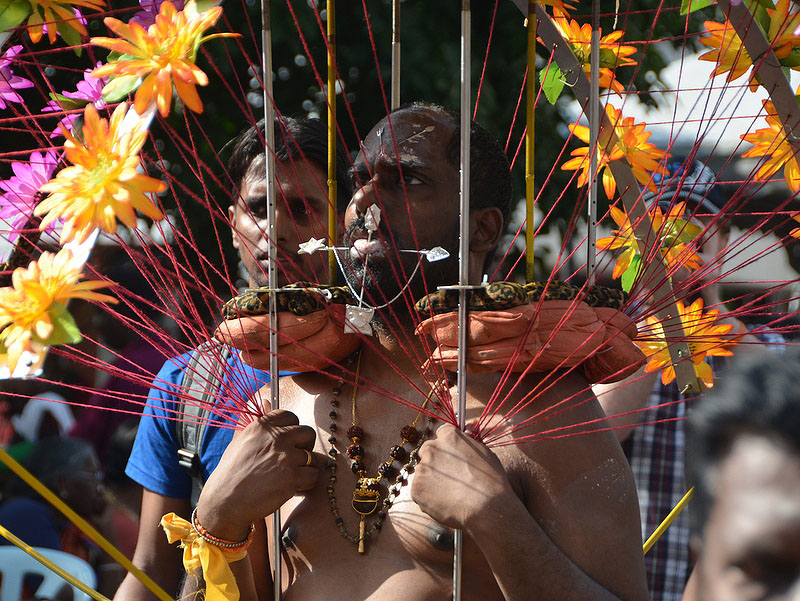 Other devotees attach fruits or small milk pots with metal hooks to their body. Most of them are Indian, but also some Chinese take part in the ceremony.

Many devotees carry pots with milk on their head. They carry this up the more than 500 steps to the Hilltop Temple. 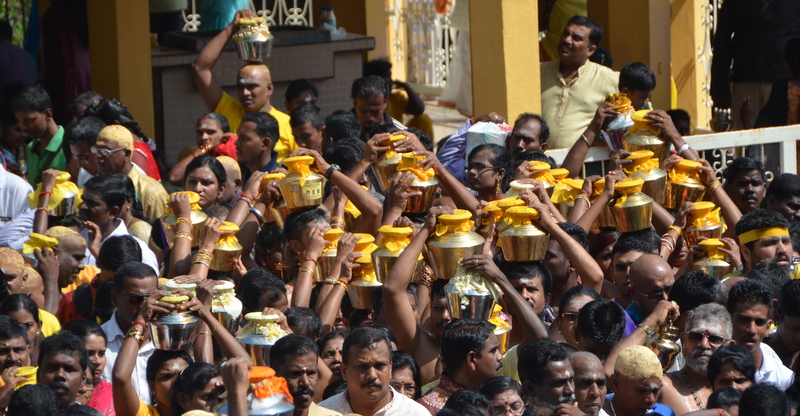 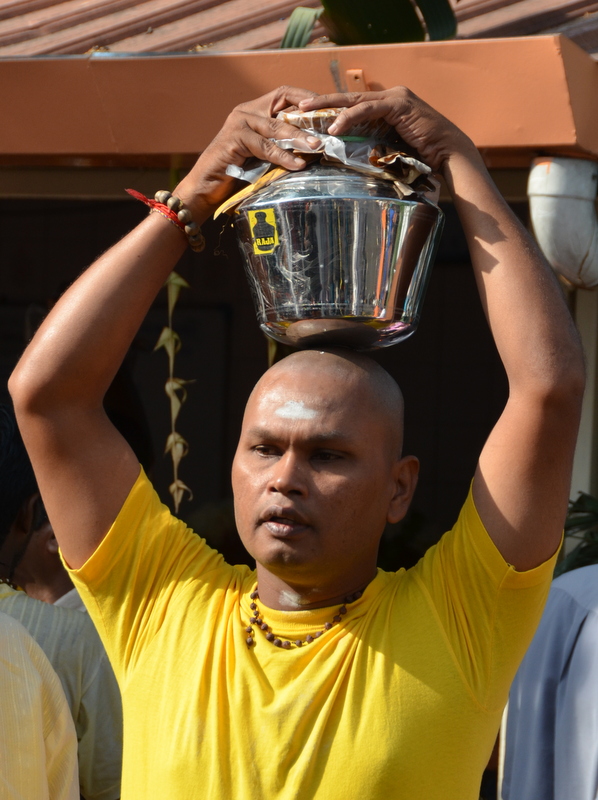 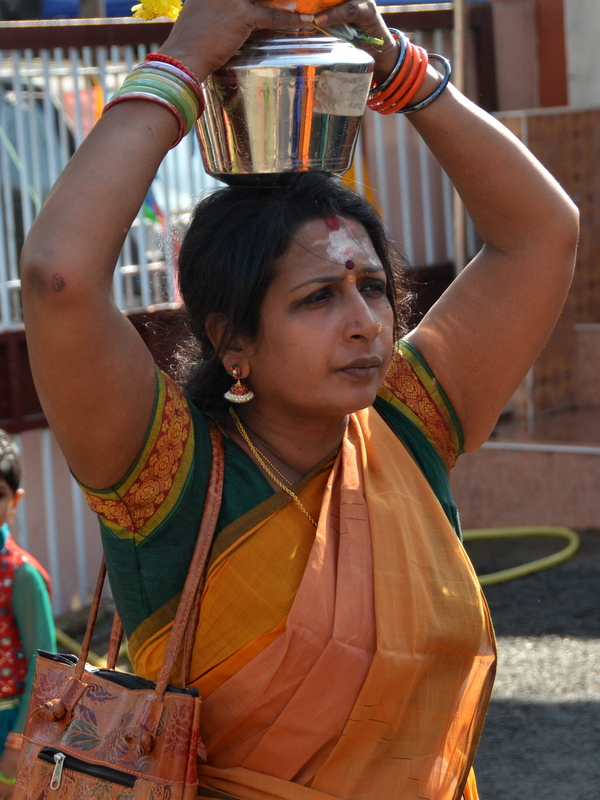 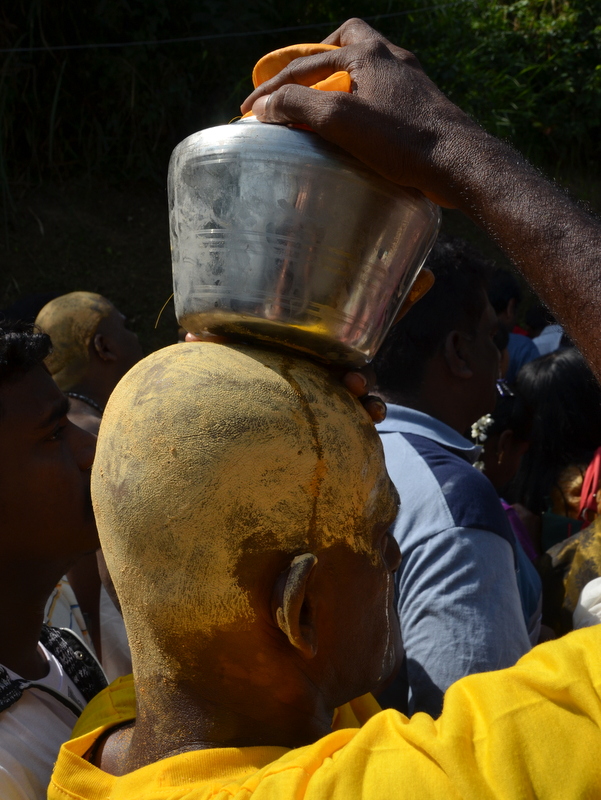 Quite a few devotees have their head shaved by barbers at the foot of the hill, as a sign of submission to Lord Murugan and in the hope that it will bring them good luck. 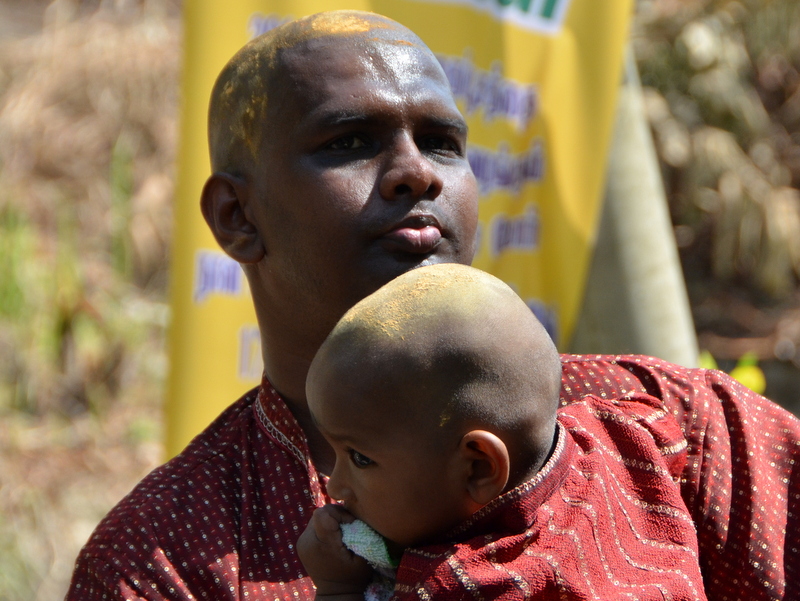 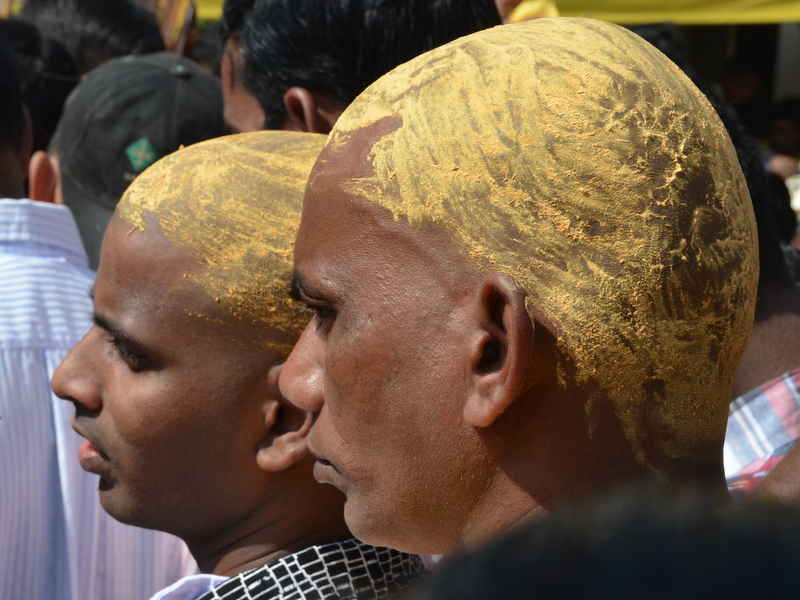 We were prepared for massive traffic jams in Penang, so on Thaipusam day we left our car at the hotel car park and took the bus. It was well organised, buses went on and off to Gottlieb road, dropping thousands of visitors. From there we had to walk, past numerous stalls, it was quite a carnivalesque atmosphere, more than I remembered from the Batu Caves in KL (but that was many years ago). Kavadi bearers, often carrying really elaborate (and heavy) contraptions on their shoulders, devotees carrying pots with milk for offering in the temple later.

Along the road there were also many places where you could have free (vegetarian) food. Near the start of the stairs there was a place where barbers where shaving heads. Kavadi bearers can not climb up until the temple, compared with the Batu Caves where there is a special “lane” for them. Climbing up the more than 500 steps was a slow process, step by step, it took us more than two(!) hours to reach the temple. But not boring there was a lot to see. And the festival is a photographer’s heaven…:-) Here is a gallery of pictures

Sitting down for a moment

Must be so painful

The barber at work

Shall we do it?

Looking down to the crowd

No shoes in the temple

Where are my shoes?

It was a nice experience, but when I compare it with (my memories of) the Batu Caves ceremony, I prefer that one, as I felt it had a more “sacred” atmosphere.