The limestone hills around Vang Vieng have many caves. We decided to visit one of them, the Tham Chang cave, because it is on walking distance from the village and considered  by some to be the most famous one .

Not sure it that is true, I noticed considerable confusion on the Internet, probably caused by the fact that Tham means cave in the Lao language, so all cave names start with Tham..:-).

From the village it is a nice walk of not more than half an hour. You have to cross a resort (2000 Kip) and pay for the cave (15000 Kip). Not cheap, but worth it. Steep steps (147, we counted them!) bring you to the entrance of the cave, where a viewing platfom gives you a nice view of the surroundings.

View of the bridge and Vang Vieng

Don’t expect an unspoiled cave here, this cave has a long history, it has been used as a shelter in the 19th century by the local population, during invasion by Chinese marauders. Here and there inside the cave you can still see man-made constructions.

But there is enough beauty to be seen. You can follow several routes in the cave, all of them eroded in the past by water. Fascinating

Bridge to the netherworld?

Aric inside the cave

There still is a stream coming out of the hill, near the start of the steps up to the cave. A perfect place to take a bath. Never seen such crystal clear water! Of course we could not resist the temptation..:-)  The water was not cold at all.

Disappearing in the cave

Shall I do the same? 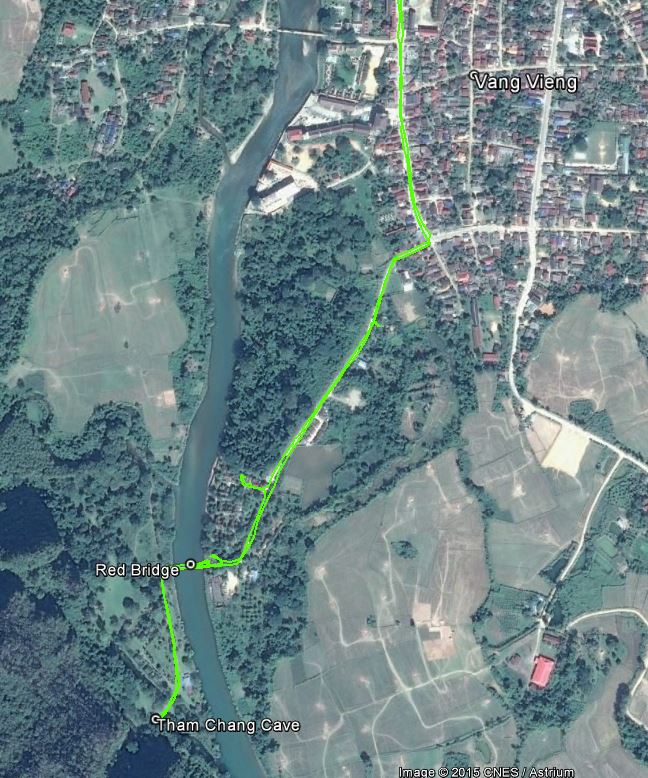