The last time I visited Taiping was during CNY 2016 , before my trip to the Netherlands. As I was missing what I jokingly call my 2nd home town, I went back last week, staying with my friends George and Jenny. We started from KL on the first day of Ramadan, not much traffic and the Tapah R&R was almost deserted.

We had lunch in the Taiping Old Railway Station, Assam Laksa and Cendol, delicious.

The Old Railway Station is located next to the modern one and is now part of the Taiping Heritage. Quite nice, don’t know who is responsible for its “renovation”, but a few eateries are operating there now, and there is a small Heritage Gallery.

One “historical” mistake struck me, the signboard says that this old station dates back to 1885. But that is not true. Yes, the first railway in Malaya was built in 1885, from Port Weld (Kuala Sepetang) to Taiping, but the Taiping station was where now King Edwards School is!  Only about a decade later,the “old” station was relocated to where it is now.

We had a look at the gallery and met the young, dynamic, manager, Soo Mei Chong, who with her sister, recently started a cafe, the January Cafe,  next to the gallery. Both gallery and cafe worth a visit.

The 31 firsts of Taiping

With the manager of the gallery

After our lunch we passed the Rest House, another one of Taiping’s “firsts” and for many years already in a deplorable condition. Recently this eyesore had been protected by a decorative fence, illustrating the many “firsts” of Taiping (the Rest House actually being one of them..lol).

I was quite shocked to see the present condition of the fence and immediately published this picture on the Whatsapp of the Taiping Heritage Society, with a caption: Taiping Warisan? 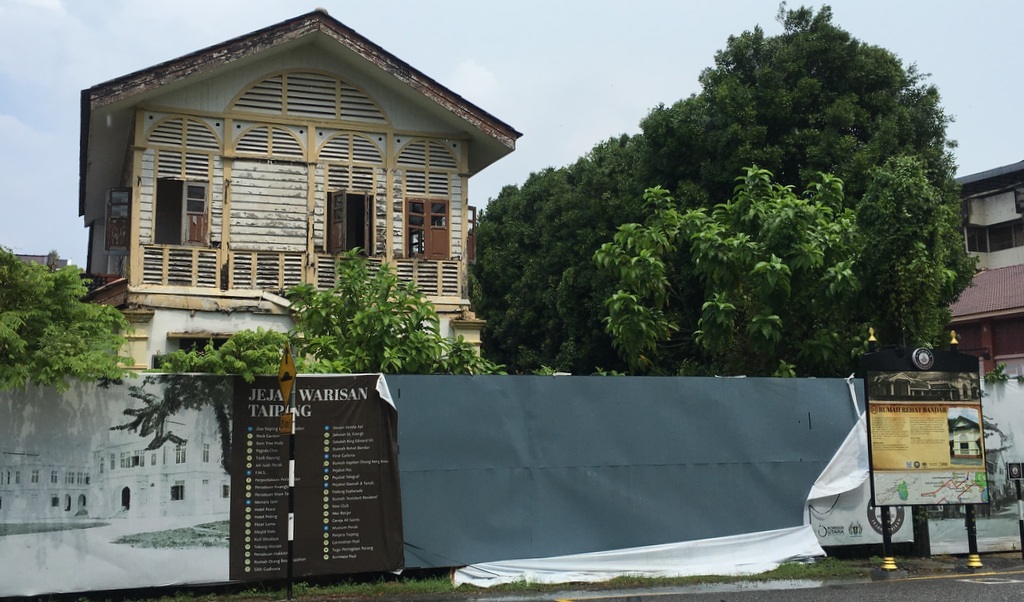 We had also a look at what was originally Anuar Isa’s  First Galleria, a failed project, now taken over by the MPT town council. I could enter, although it was not yet open to the public. The friendly Malay staff could not tell me much about the MPT plans. Here a few pictures of posters. Look at the prices for the planned “Hop on Hop off” bus. Another failed project in the making?

Waiting to be reopened

Look at the prices!

A few weeks ago the Taiping Heritage Society , had organised an event to plant new flowers around the “Peace park” in the Taiping Lake Gardens. In the afternoon George and I went there to see how it looked now. A few of the newly planted flowers had  perished already. A very Malaysian problem, how to maintain a project…

Actually the Taiping Lake Gardens could become a no 1 tourist attraction of Malaysia! BUT maintenance is needed. Instead of spending money (cronyism? ) for ugly warning signs, some of the existing landmarks could have been repaired. In the past the pillars were connected with planks, supporting colorful vegetation. And the “monument” was originally supported by Japanese Sanyo, with a digital clock, powered by solar cells on top of the structure. Sanyo was taken over by Panasonic and the monument is now a sad and sorry sight.

Peace in many languages

The beauty of the Lake Gardens

Nice pillars, only the roof is missing

I had dinner  that night with my friend May, nice Indian food in Siang Malam. She told me that  a shop opposite Taiping General Hospital served a good curry mee, so the next morning George and I had our breakfast there. She was right, very nice food, a pity that the shop will close end of this year. As I forgot to take a picture of the shop, I had to use Streetview in Google Maps…:-)

What to do after breakfast? I suggested to make a short trip to Batu Kurau, north of Taiping. It is nice countryside with padi fields, limestone caves, small kampungs. Years ago I had discovered a quaint barbershop near Anak Kurau, built against a cliff. I had a haircut there for a few Ringgit and during later Taiping trips I had gone back a few times. I had left my GPS at home, so we got lost a bit and had to ask directions for “a barbershop built against a cliff”. Surprisingly everybody immediately know what we were talking about!

But the shop was closed, probably because of Ramadan. Nearby the shop there is a small cafe, also closed and a cave with nice stalactites. The footpath along the stream was new, but it ended after  a few hundred meters. Fascinating to see how the trees struggle for survival. The road continues for a few km and ends at a resort (also closed).

We followed this road

A resort at the end of the road

The resort is located next to a small stream with crystal clear water. There could well be a waterfall further upstream.

After driving back to Taiping, we had lunch at Duncan’s Cafe. Duncan Raj is a THS-member and has recently opened this cafe as part of a boutique hotel, Maxwell Inn. I hope he will succeed as the location on Jalan Taming Sari, is a bit far outside the town center.

The THS has an active Whatsapp, where I uploaded the picture to the left, after we arrived. Not much later a few more guests came in, also THS-members…:-)  They were planning to have lunch in another shop nearby, when they received the picture, so they came over to meet me. Taiping really feels like my 2nd hometown! 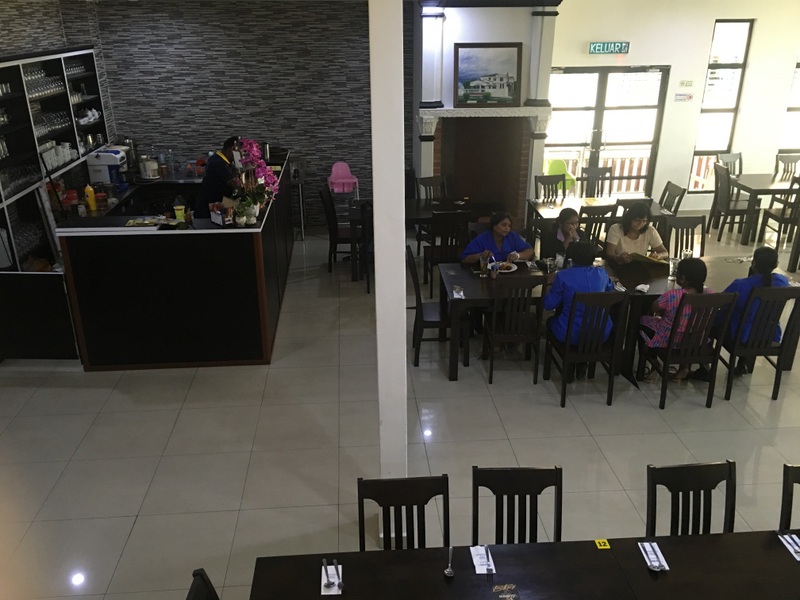 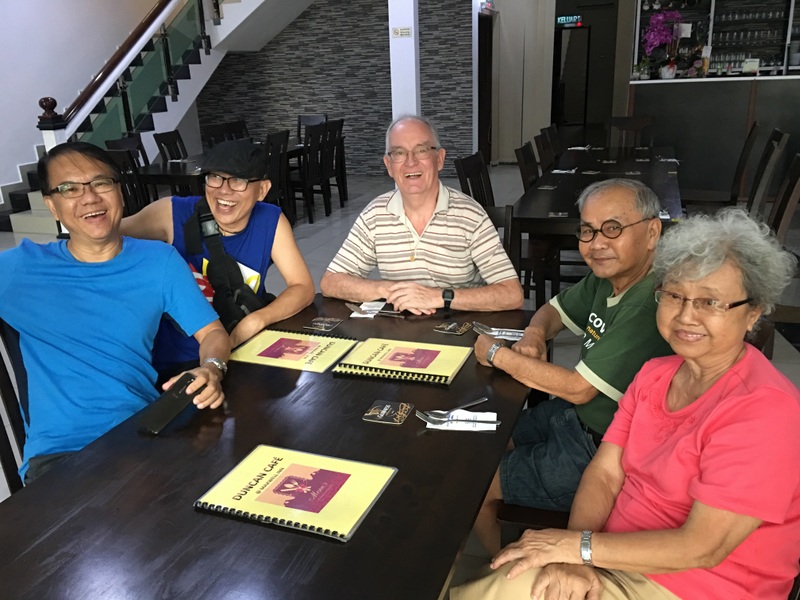 In the afternoon I (re)visited the Kota Long Jaafar in Bukit Gantang, with George, Suet and her husband Peter. Suet is a member of THS and very interested in the history of Taiping. She is a friend of George and we had met the night before in Siang Malam.

It turned out that we are both fans of Isabella Bird! This intrepid English traveler has been traveling from Taiping to Kuala Kangsar, February 1880. She had to wait in Long Jaafar’s fort until the elephants arrived who would carry her to Kuala Kangsar. Read her letter XX and enjoy. Actually she made a mistake in that letter, the KOta is not in Matang but in Gantang…:-)

Not much is left of the fort, except graves with tombstones. When I first “discovered” it, in 2014, it was  ruined. Surprisingly (?), this time, it looked much better. No idea who was responsible for the renovation.

Suet and George reading the signboard

One more  example to show how small the Taiping world is…:-) Amril is another THS member, very knowledgeable about Taiping’s history and actually a descendant of Long Jaafar. I had asked him to join us to the Kota Long Jaafar, but he was busy. After our visit we wanted to have a drink, but this is a Malay region, most shops are closed. We tried our luck at Changkat Jering, where we had a look at the busy Pasar Ramadan and finally found a mamak stall that was open.

Having our drinks there, I got a Whatsapp message from……… Amril! He had a stall at the Pasar and had seen us passing. On our way back to the car, we met him and had a chat. Looking forward to meet him after Hari Raya.

A large variety of snacks

Amril in his drinks stall

It was only a short visit, the next day I had to go back home already. After George and I had breakfast at the Casual Market, his favourite joint, we visited Taiping’s Central Market. I have been in Taping so many times, but never explored this heritage site. Fascinating, dating back to 1884 (Old Market, on the far end in the picture below) and 1885 (New Market, in the foreground). In between Siang Malam, now another popular joint, but originally meant to provide the market workers with drinks and food.

There are plans to relocate the markets to a new location and transform the old markets into something similar to KL Central Market, a tourist attraction. Heaven forbid… 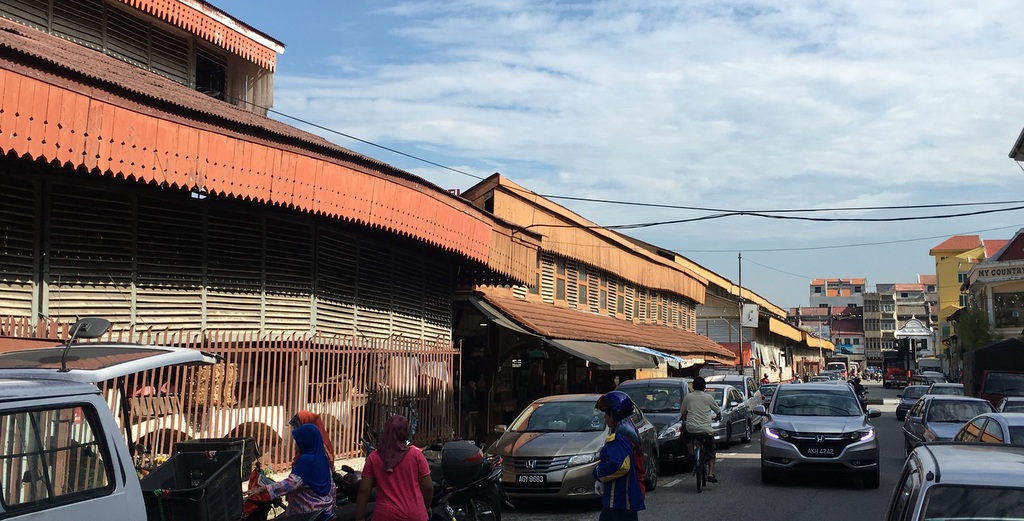 To the left the New Market, right picture shows the Old Market 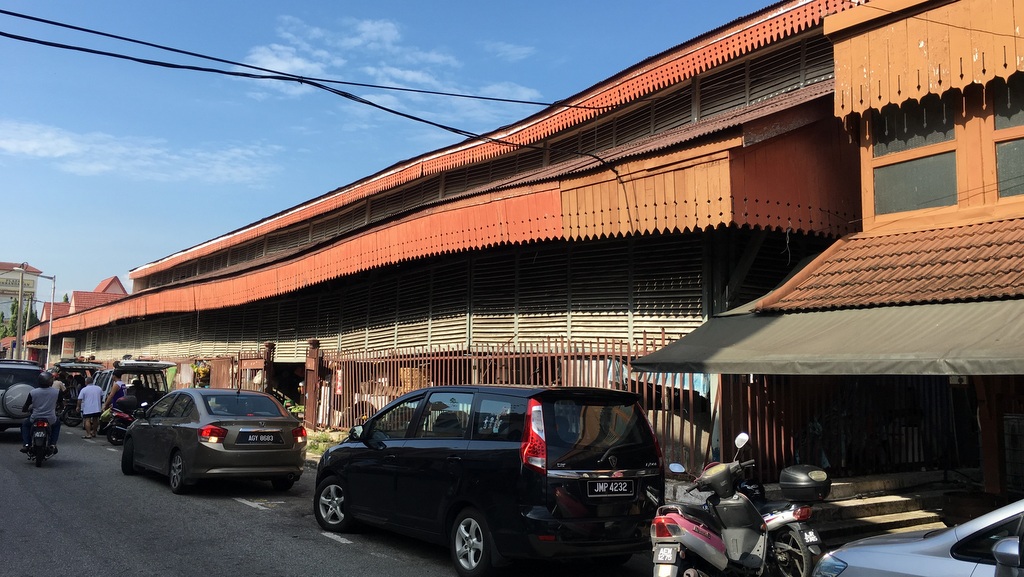 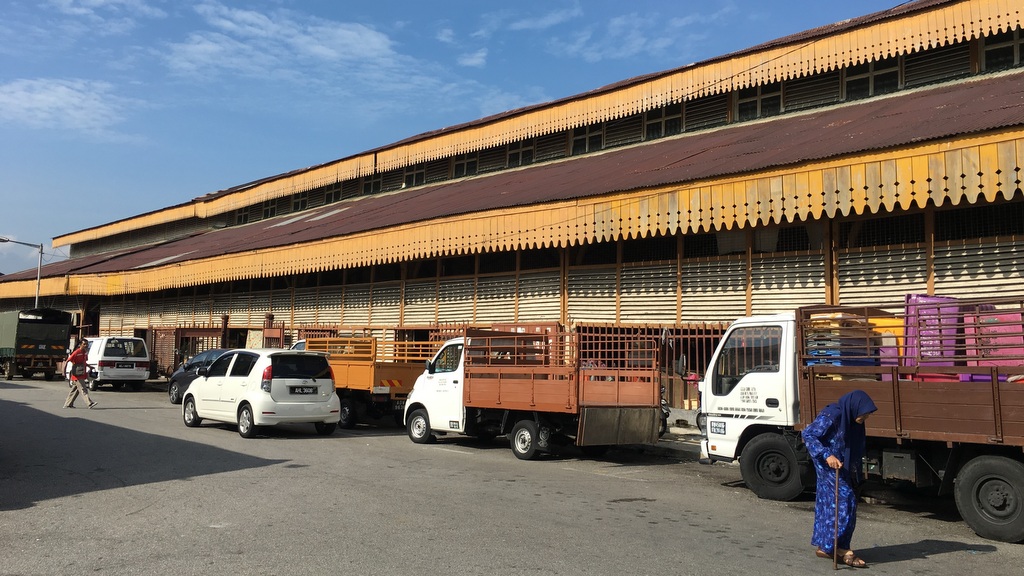 Fascinating architecture. I hope THS will fight to preserve these Taiping.landmarks!

Originally I was planning to drive back to PJ after my market visit. I was aware that an Australian War Veteran music band was going to perform in the New Club, but I thought it was during the evening. Actually it was a lunch concert so I decided to attend the concert.

That gave me an opportunity to bring Yeap, the president of THS in contact with Soo Mei Chong,  the manager of the January Cafe in the Old Railway Station…:-). She looks so petite between the two giants :-)! We had nice coffee there..

On our way to the New Club, we passed the Rest House, and, lo and behold, the torn banner had been repaired! Miracles do happen…:-) 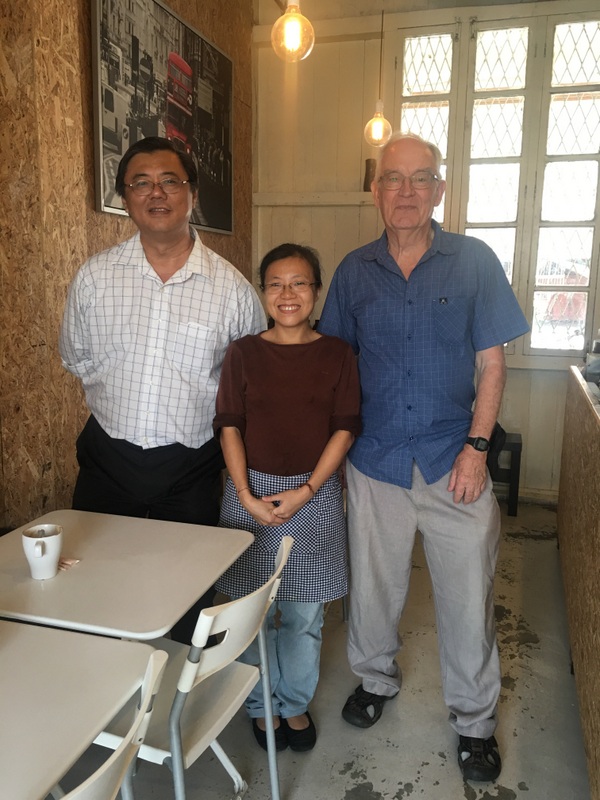 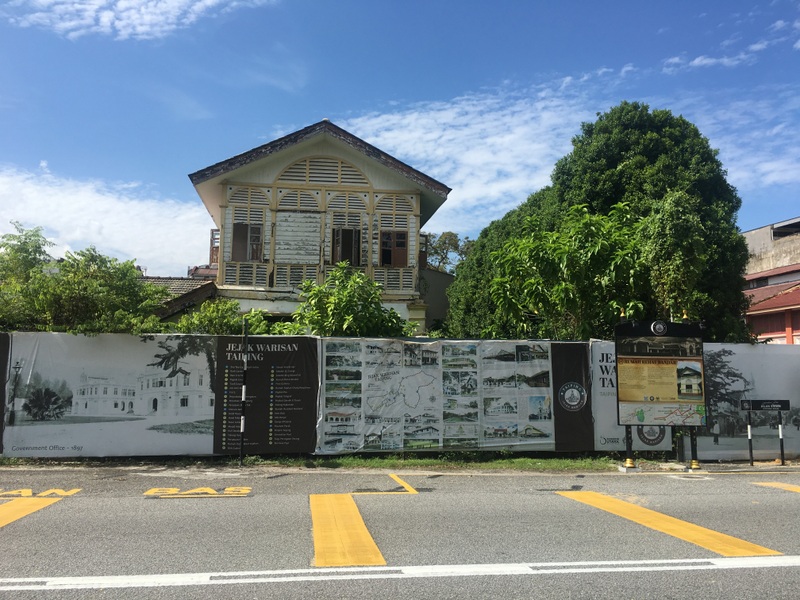 In the New Club a big crowd was waiting for the concert. The Royal Australian Navy (RAN) veteran band was on a short tour of Malaysia, giving concerts in Taiping, Ipoh and Batu Gajah. I would have liked to attend the Batu Gajah concert in God’s Little Acre. Every year on the 2nd Saturday in June a memorial is held at this cemetery to commemorate the victims of the Malayan Emergency, quite a few of them were Australians. But I was not free that Saturday, and this concert was a pleasant alternative. 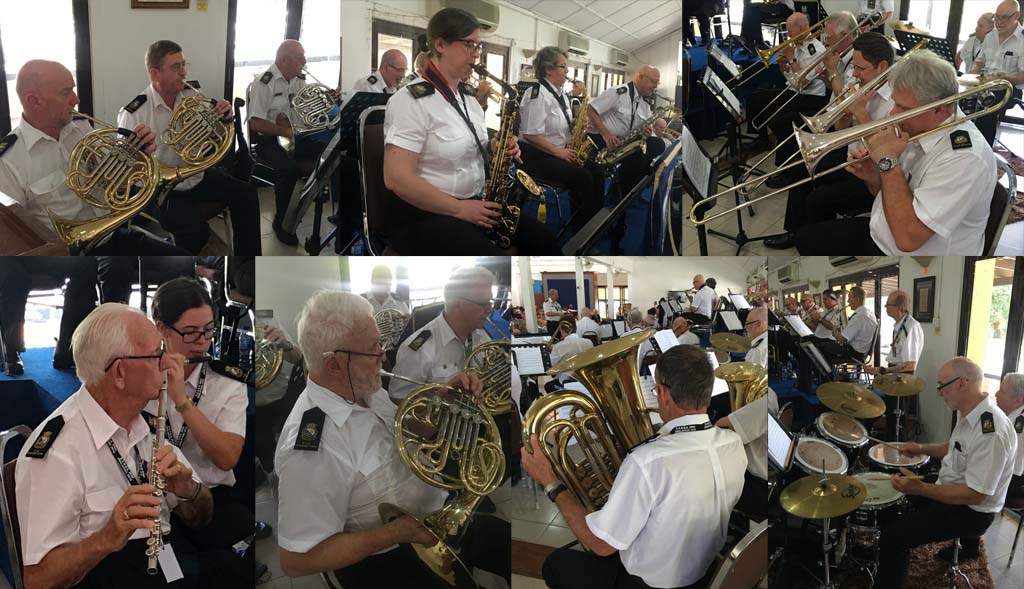 They played well. Two more pictures. The left one shows that the players may be veterans, but they know how to use modern technology! The trombone player is using a tablet for the musical scores, instead of printed sheet music….:-)

The right picture shows two happy French horn players. Paul Baker, to the right, played as a guest in the band. He is the composer of the Taiping Suite 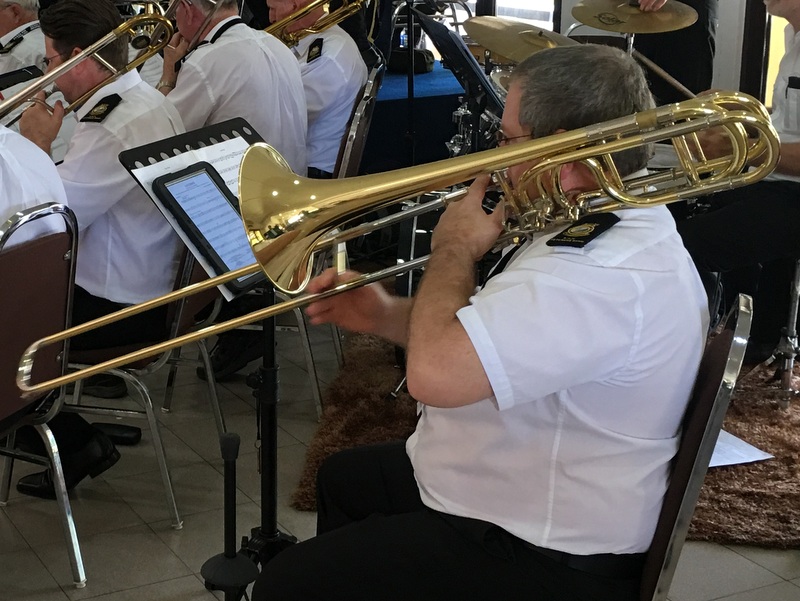 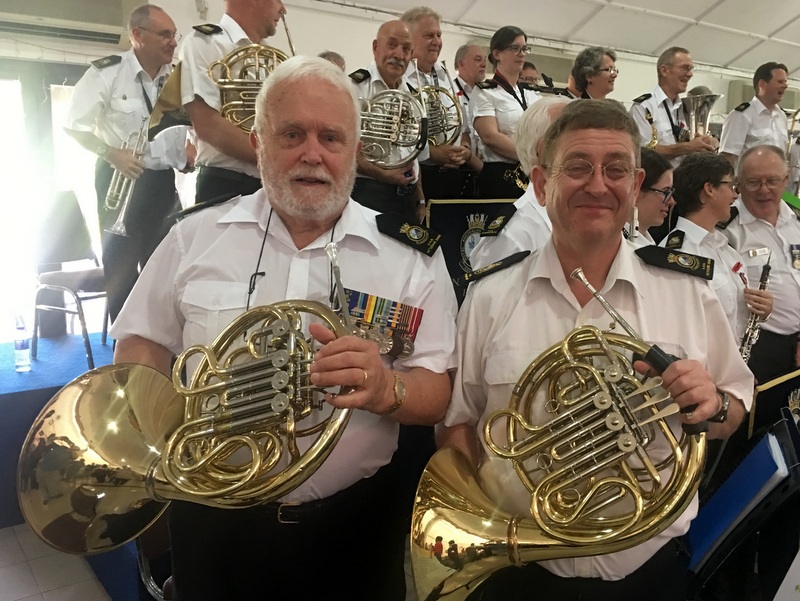 Here is a short video of the concert.

Taiping, my 2nd hometown…:-). Looking forward to come back soon

10 thoughts on “Taiping, my 2nd hometown”