Numerous times I had heard and/or read about the Ayer Hitam Forest Reserve in Puchong. With a waterfall, maybe even more than one….

But I had also heard that this forest reserve was a research project of the UPM university and officially out of bounds. As I am a good citizen, I was reluctant to trespass…:)

Last week I joined a so-called hashwalk, for the first time in my life. I will blog about it later. After the walk there was an open-air beer party where I met Master Ho, 76 year old and still going strong.  When he was 15(!) years old, he started a hiking group Pathfinders55, which still exists today. We came to talk about Ayer Hitam and I accepted his invitation to join him for a hike there.

Here is the location of the Ayer Hitam Forest Reserve. Surrounded by urban development, it is surprisingly large. Our hike is marked in green. 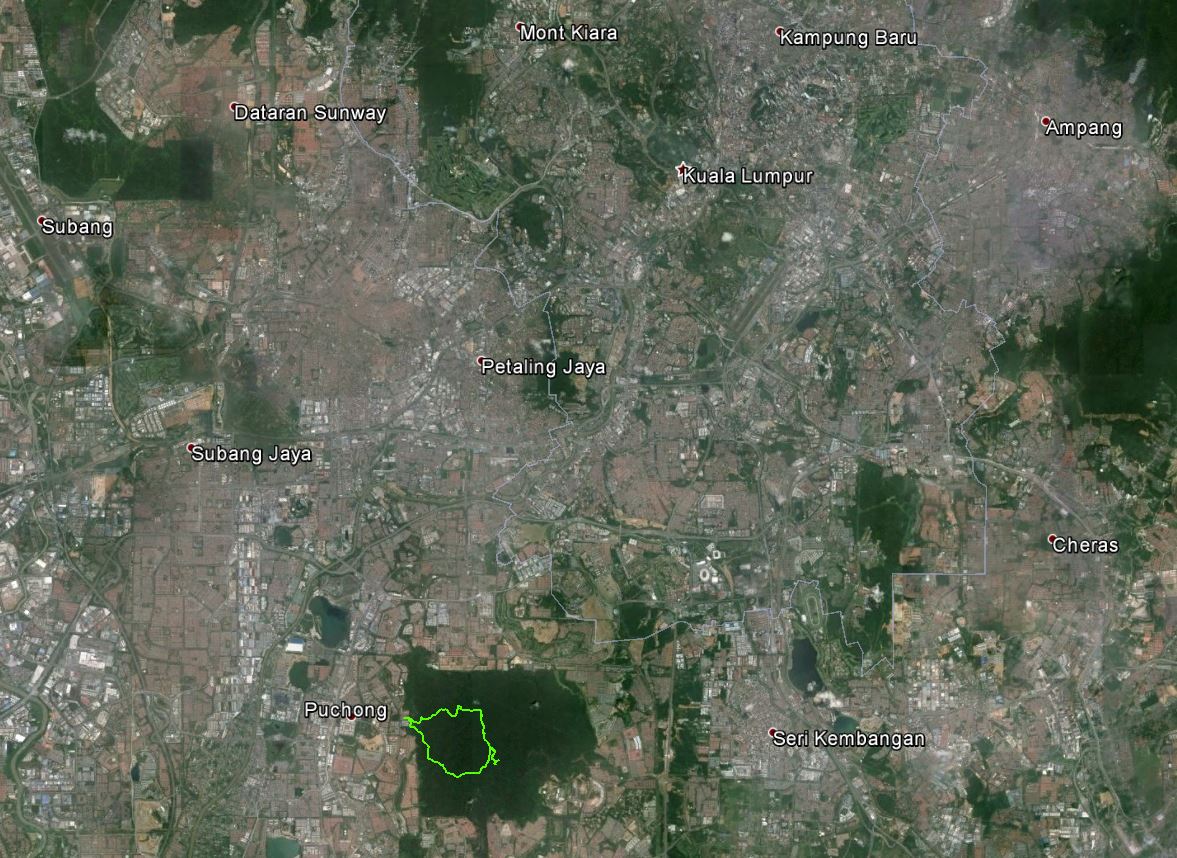 Here is part of the Reserve in more detail (click to enlarge). Our hike was about 10 km and took more than four hours. The grey line comes from Google Earth and probably marks an”allowed” trail. On our hike we did not meet any enforcement officials, maybe because it was weekend 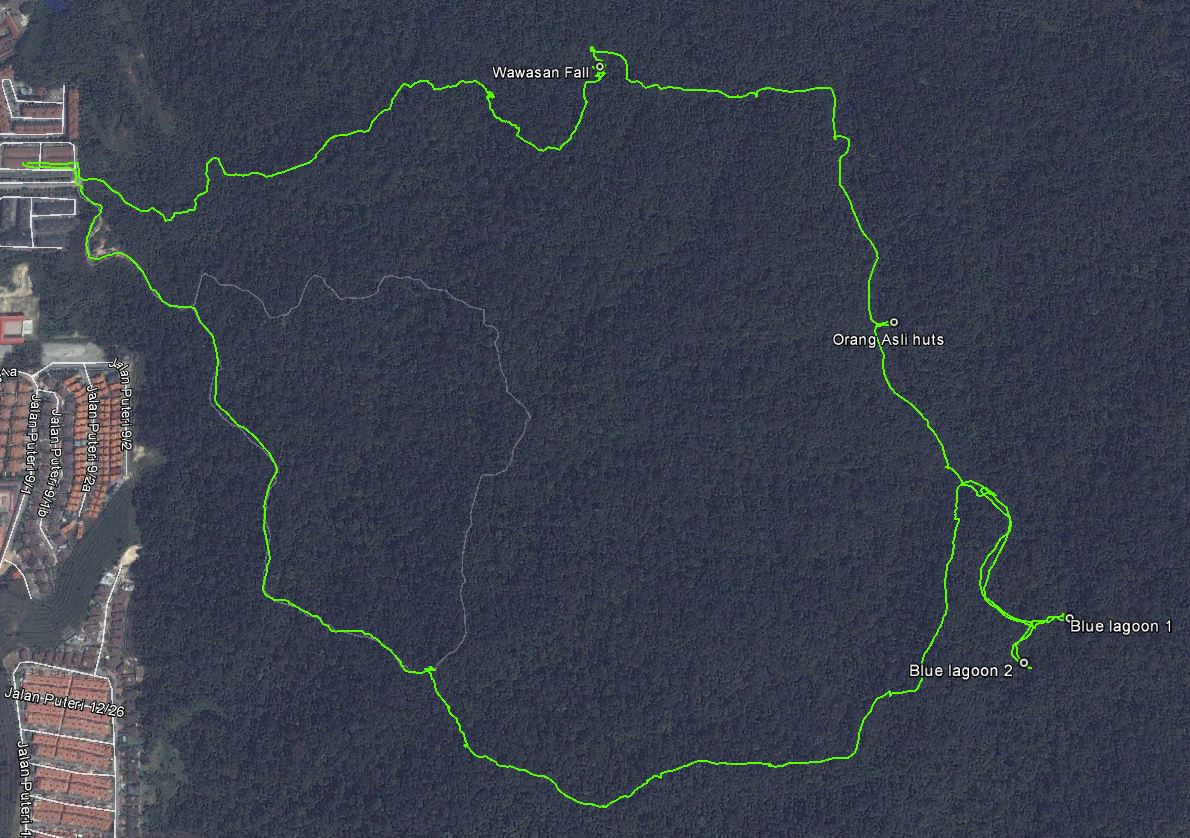 Master Ho had sent me a whatsapp where to meet:

I was surprised that there was quite a big crowd that Sunday morning. The pink/purple house was easy to find and Master Ho was waiting for us. We took a group photo and started our hike. Clear trail, climbing up, then down, crossing a stream, then up again.

Master Ho to the right. Peter doing his act

A shrine at the entrance of the trail

After about one hour we reached the waterfall. Many people there, enjoying a bath and relaxing. No rubbish! I understood that the local community is taking care about the place. 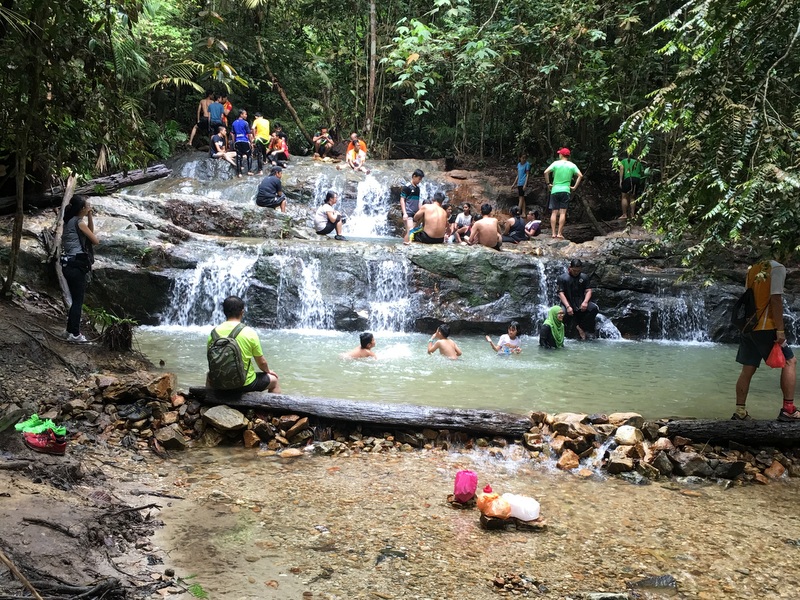 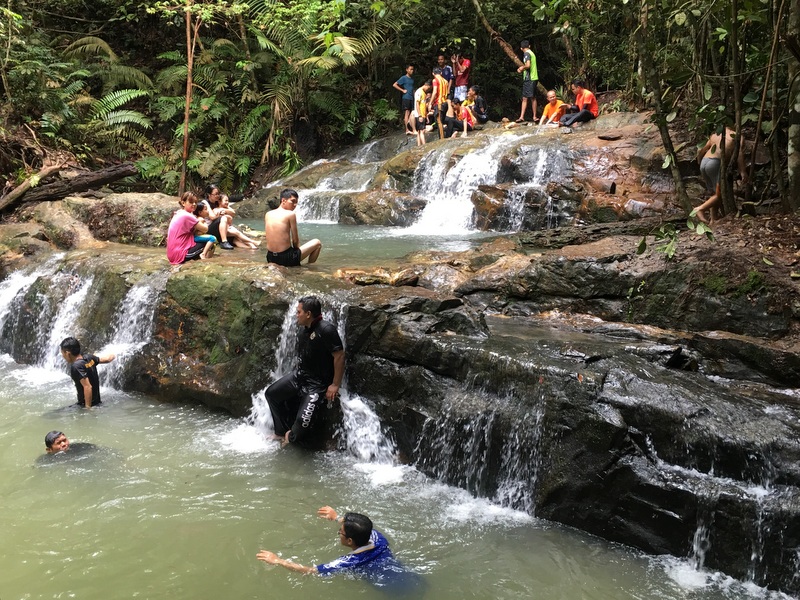 Here is a video of the waterfall

What next? We could take the same way back, but we also could have a look at the Blue Lagoon. Easy decision of course…:-)  So we continued our hike, passing another nice waterfall (no people, access difficult) and an orang asli settlement. Nobody living there now, probably only when fruits (durians?) are harvested. Romantic setting.

What shall we do?

Not in use now

Here is a video of another river crossing. Master Ho and I decided to get our feet wet. Of course I was hoping that at least one of my friends would fall…

Good that I don’t know Bahasa

Peter unsuccessfully tries to draw the attention of Suat

Here is Peter, taking a bath in the BLue Lagoon

The second Blue Lagoon is even more attractive, with a small waterfall at its end.

A pity that these lagoons are out of bounds, but understandable. Fortunately they are located deep inside the Reserve. It took us about two more hours to hike back to the pink house. Here are a few pictures to show the beauty of nature.

All the time we were in the jungle, but just before the end, we came out in the open and noticed this rock face with bright flags on top. Maybe because the day before it was Wesak? 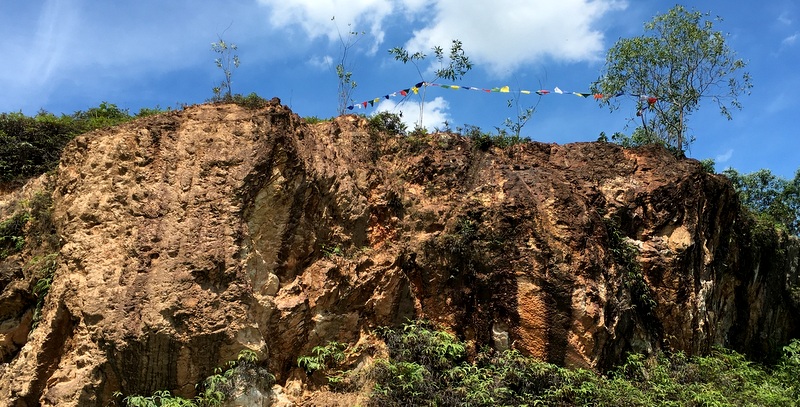