For those of you, who do not know what a Geocache is, have a look at the Wikipedia entry about Geocaching . I became interested in this activity in 2002, and have hidden more than a dozen geocaches in Malaysia. Often in such remote locations that they never have been found..:-). At the moment I have only two “active” geocaches, a real “oldie” in the Kanching recreational forest, The Kanching Falls , and a more recent one in Bukit Kiara. I hid the Kanching geocache in 2003 at the 7th waterfall and it has been found 35 times.

One month ago a geocacher reported that the geocache had disappeared. So I had to go back to Kanching and replace the geocache. It was at the 7th tier that Aric and I had our backpacks stolen, a few months ago. See my post Robbed at Kanching. Therefore I  did not want to go alone. Several of my friends had never visited Kanching and were eager to accompany me! Here is the Fellowship of the Geocache…:-)  From left to right PK Chan, me, Peter Thang, Clinton, Damian, Emily, Chee Wai and Pola Singh. Suat took the picture. 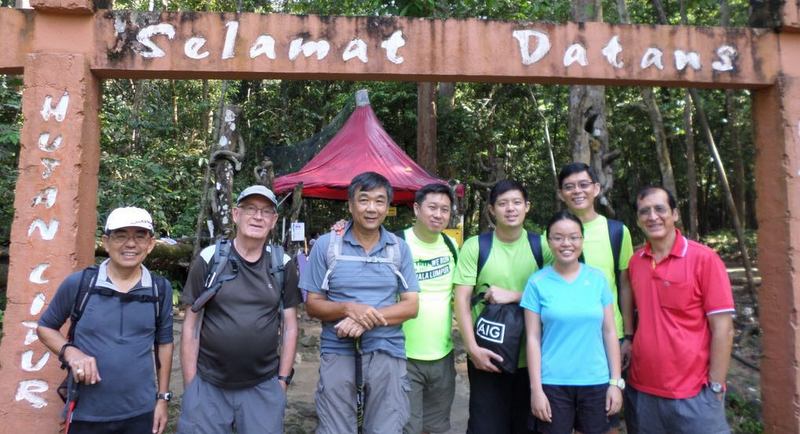 There are seven waterfalls in Kanching. The first four tiers are easily accessible via a cemented path. Two of them have pools, suitable to take a bath. When we started around 10 am, there were not yet so many visitors, but on our way back, there was really a crowd. 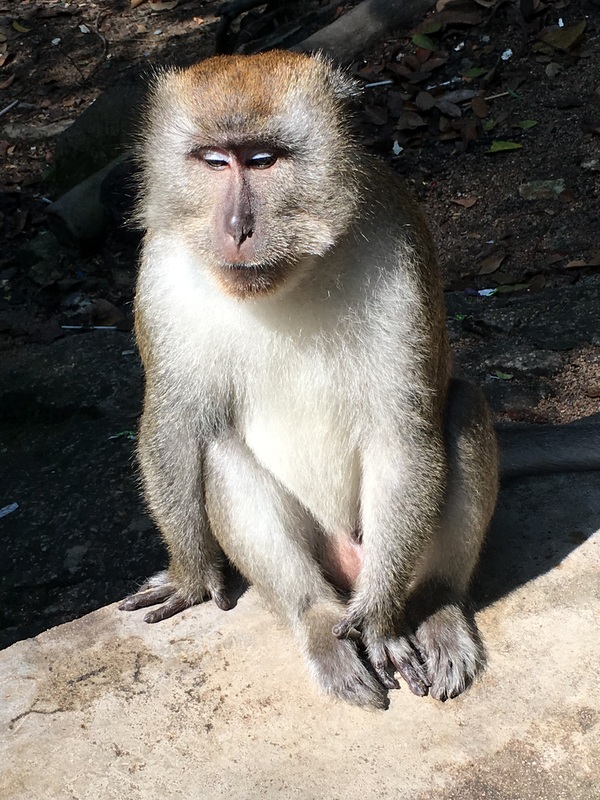 Before you reach the first waterfall, you have to pass a crowd of monkeys (long-tailed macaques).

They are watching you if you have any food they can grab.

This alpha-male did not mind to have his picture taken, but modestly he protected his family jewels

Here are the first four tiers. The fourth tier is the most popular one.

After the fourth fall, cemented steps continu for a while and lead to a bridge. After that the trail is clear and well-marked, but steep. The fifth tier is my personal favourite. The sixth tier is a very tall cascade. Finally you reach the top tier. A nice pool invites for a bath.

Here we had coffee and delicious cake from Suat. I checked the geocache location and found that the geocache was indeed missing.

I had prepared already a replacement cache. It is a glass container with the usual content, a logbook, pencil and some goodies. Chee Wai and his daughter were interested to see what was inside. 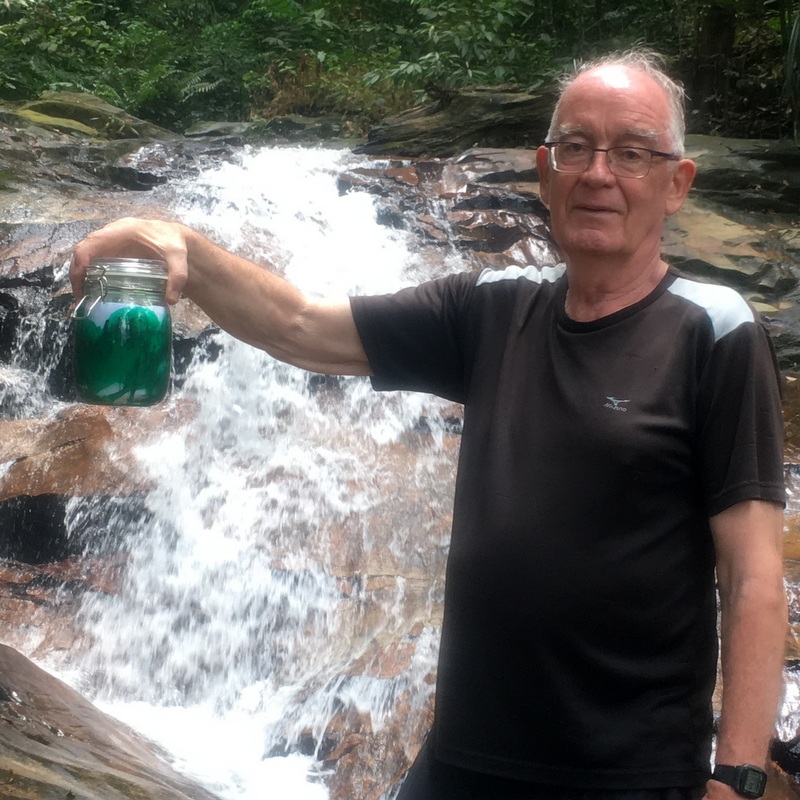 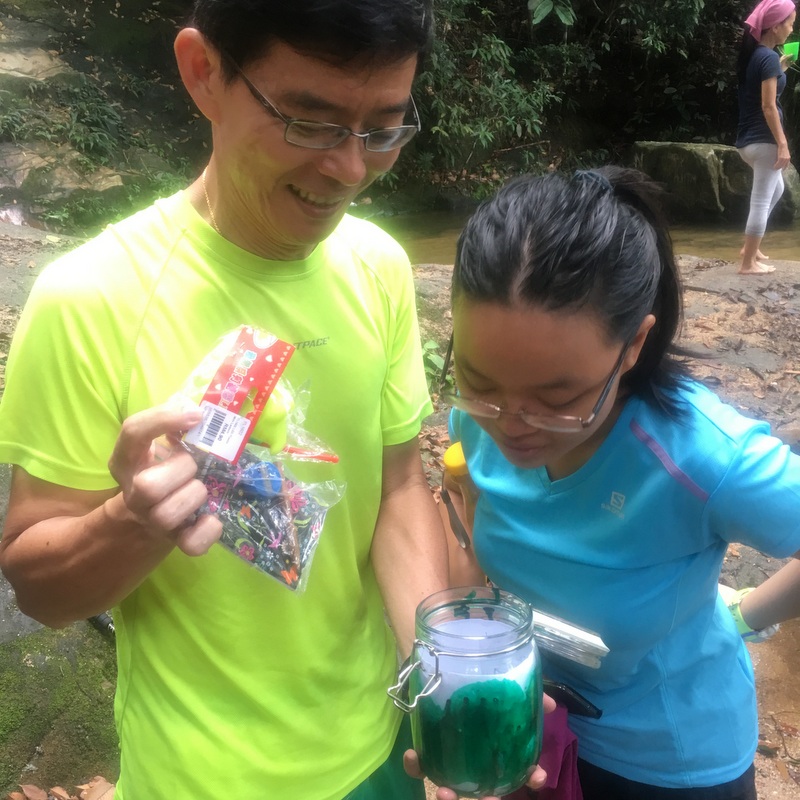 Problem was that there were a few more people. In Geocaching lingo they are called Muggles.  I decided to talk with them and explain the geocaching concept. They were interested, so I did not need to be secretive hiding the cache. I asked them to take a picture of the group, before I hid the cache. Here it is. 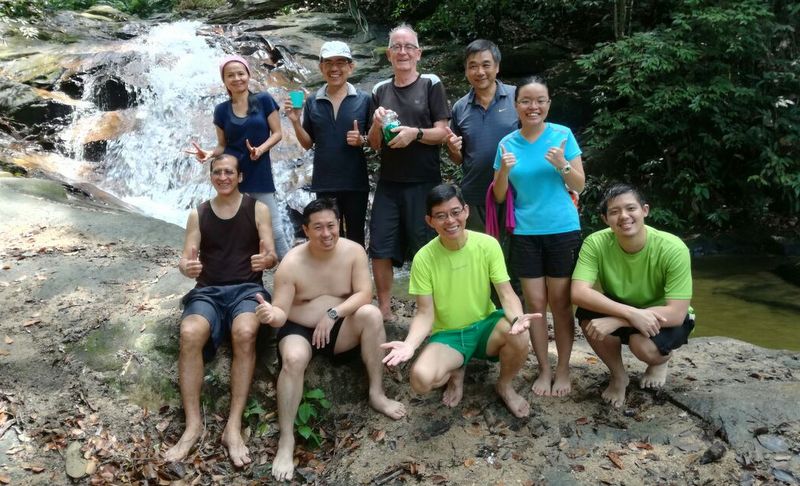 Going down a steep slope is more difficult than climbing up. Here are two videos. The first one is taken when we left the 7th tier. Another group of people was going up

This one is taken during the descent beside the tall cascade. The exposed tree roots are very useful

Here we are back at the bridge, after which the cemented steps start. The other picture shows the crowd at tier 4. Just after taking this picture I managed to loose my balance, falling and sliding down. I needed helping hands to stand up again…:-) Luckily no sharp rocks, only some scratches on my arm and leg. Could have been much worse. 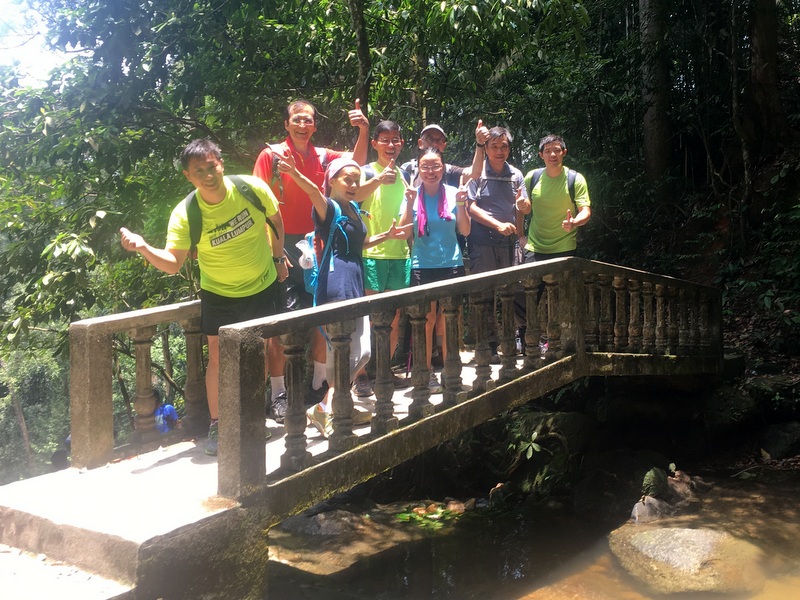 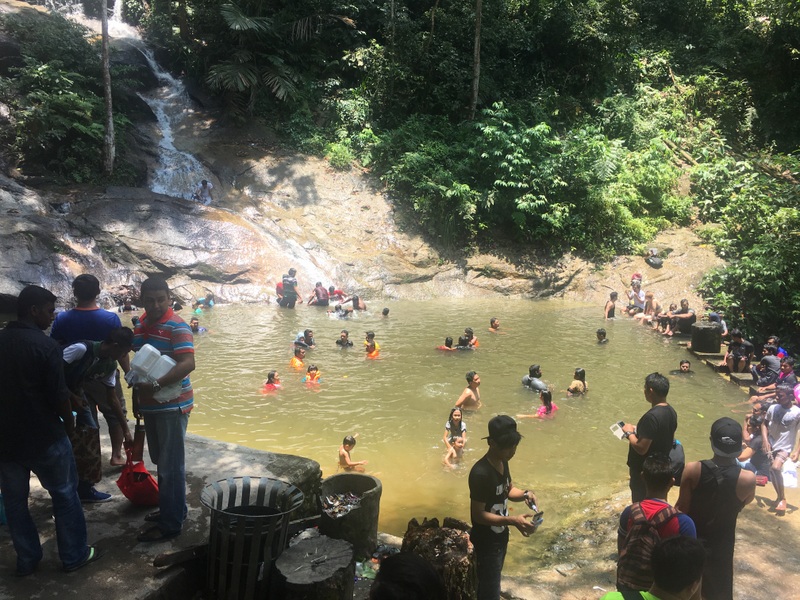 We were back at our cars around 1:30 pm. Perfect time for lunch. Clinton knew a nice shop near Jalan Ipoh. Delicious food. 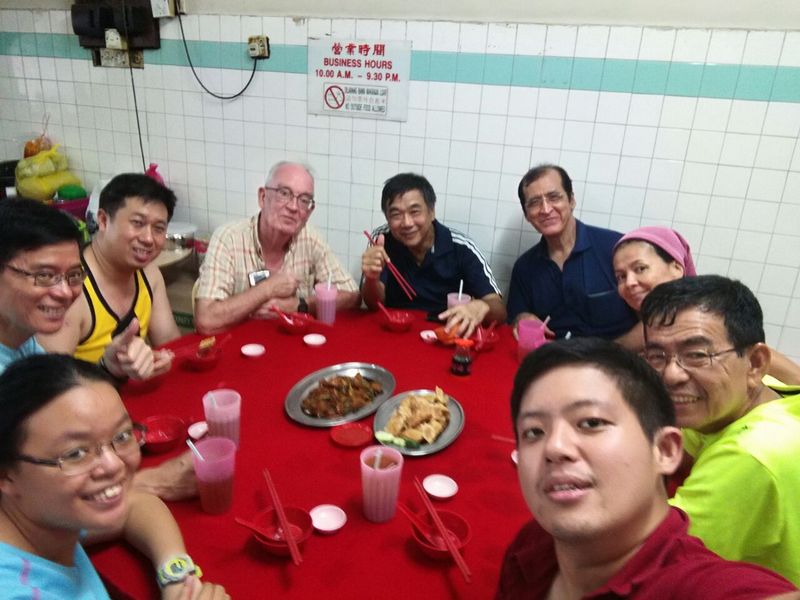 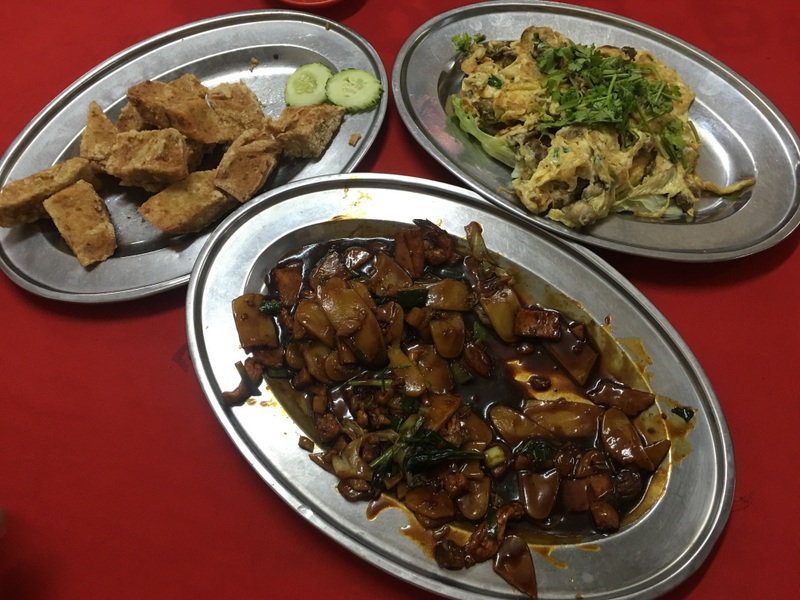