Tomorrow, 31 December 2016, just before midnight, an extra second will be added to the Universal Coordinated Time  (UTC)! It is called a leap second.

Probably everybody will be familiar with the concept of a leap day . A year in the international  calendar has 365 days, but the solar year is a bit longer, 365.25 days. To keep this calendar synchronised with the solar year,  every four years an extra day (29 February) is added to the calendar, a leap day. 2016 was a leap year, the next one will be 2020.

The Chinese calendar is based on the motion of the Moon, orbiting the Earth with a period of 29.53 days. A (lunar) year is 12 months = 12 × 29.53 = 354.36 days, about 11 days shorter than the solar year. To keep this calendar synchronised with te solar year, every two/three years an extra month is added, a leap month. Next year will be a leap year in the Chinese calendar, it will have 13 months with one of the months duplicated. Not always the same month, this time the 6th month. More detailed information about calendars can be found on my website

For those not familiar with UTC, it is the primary time standard by which the world regulates clocks and time. It is basically the solar time at 0° longitude, with the solar day as fundamental unit. The 0° meridian passes through Greenwich, therefore UTC is sometimes called Greenwich Mean Time (GMT). The world has been divided into 24 time zones, they are defined as UTC plus or minus a number of hours. For example Malaysian time is UTC + 8.

Here is a graph of the “extra” length of day over the last few decades. Click to enlarge and see more details 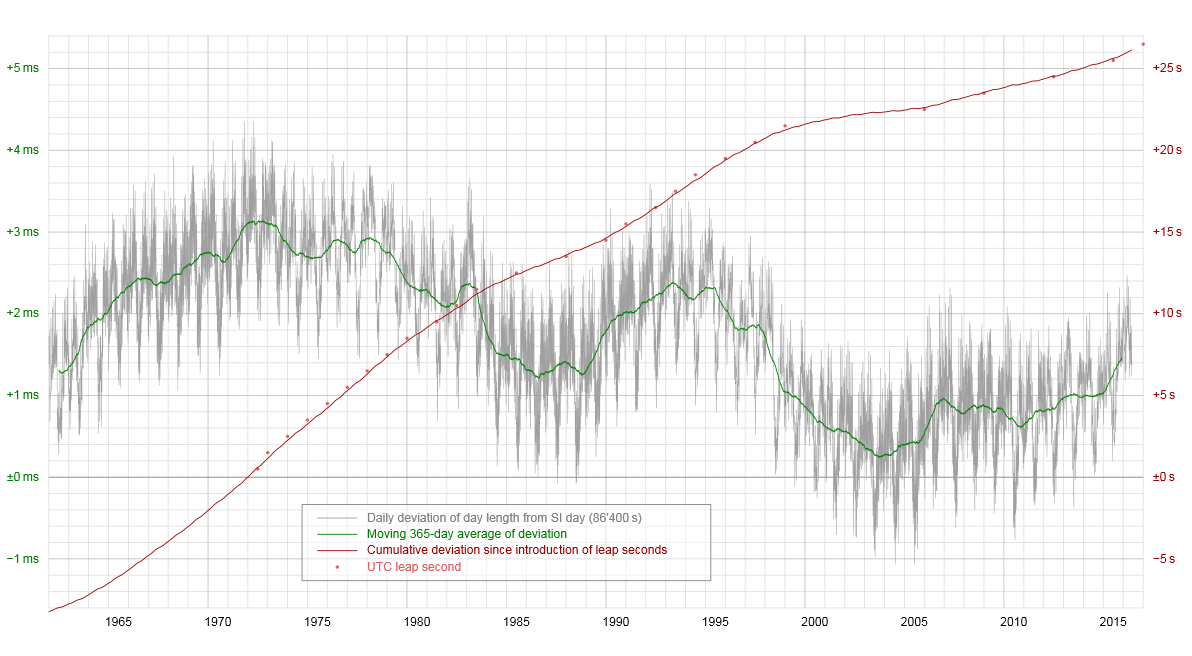 It is only a few milliseconds every day, but it accumulates! Therefore it has been decided, in 1972, to add an extra second to UTC, when this accumulated deviation gets more than 0.9 second. The red graph shows when leap seconds were inserted.  As you see, the deviation from 85440 seconds is quite irregular and actually not predictable. That’s why the leap seconds are announced only 6 months in advance.

Why are the deviations always positive? That has an interesting, physical, reason. It is because of the moon! The moon is responsible for the tides, causing friction! This friction slows down the rotation of the Earth! It is a small but real effect, the solar day increases about 1.4–1.7 milliseconds per century. There is geological evidence that about 500 million year ago, the length of the day was shorter, ~ 22 hours.

These tidal forces and eventually tidal locking might be an interesting. topic for a separate blog.