On our way to Taiping, we wanted to visit the Mirror Lake in Ipoh and try to find Japanese graves in Pokok Assam. But the weather was not favorable, so we skipped it (see the end of this report), but still arrived  rather late in Taiping, just in time to have assam laksa and cendol in the Old Railway Station. We had booked a room in the Furama hotel and had dinner in Siang Malam with our friend May.

Our room in Furama Hotel

Before our dinner we still had time to walk around in the Lake Gardens, this time not only to enjoy the beauty of it, but also to start the project I had planned…:-). Notice the two bridges below, at the right. They show the same bridge, but one picture is from about one century ago.

I had collected a number of old (postcard) pictures, and the next morning I met friends from the Taiping Heritage Society for a walk through the town, looking for the location from where the old pictures were taken, and then take a new one from that location. It was not always easy but big fun, the result can be found in a separate report,  Taiping, old and new .

In the afternoon we were invited by May for High Tea in  her “Maywarmers Lodge”, where we met Suet and Peter, who are now residing in the Nest bungalow, a place I hope to visit soon. After that we met Paul and Fahmi, who had come to Taiping to visit a waterfall the next day. First we had dinner in Yut Sun, a Taiping landmark, famous for its Hainanese Chicken Chop. Then we walked to the Government Office, one of the many Taiping firsts. There was a pasar malam, many people , relaxed atmosphere.

High Tea with May 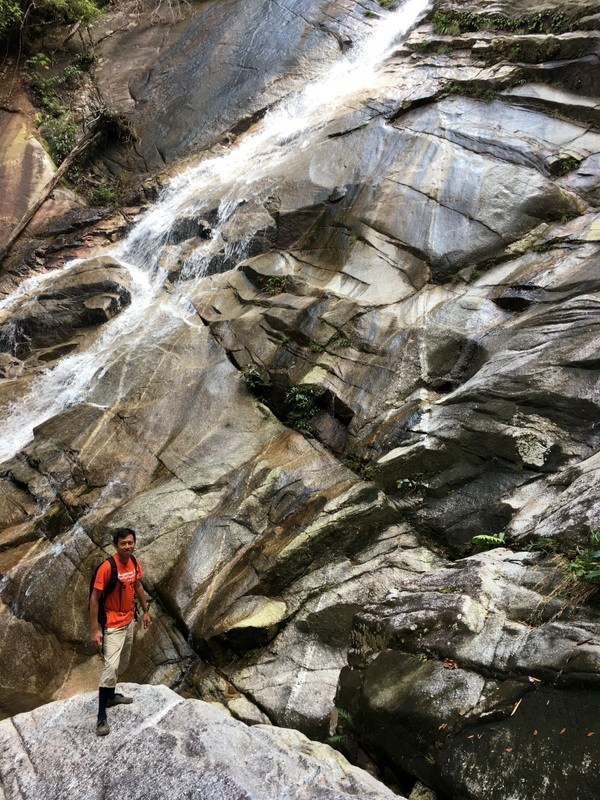 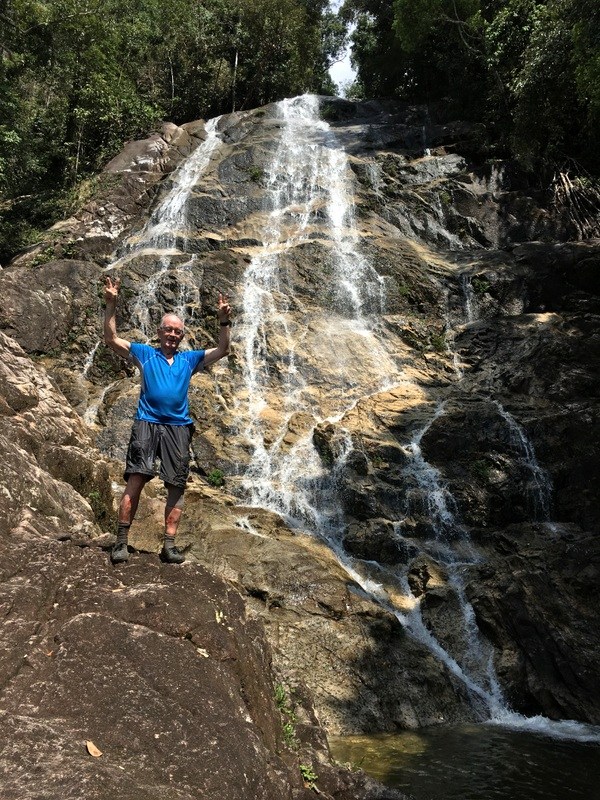 After the hike, Paul and Fahmi drove back to KL, we had a lazy afternoon, with dinner in Prima (popiah’s, otak otak and oyster omelet). After our dinner we visited the Taiping Mall, mainly because there are some panels with historical pictures of Taiping. 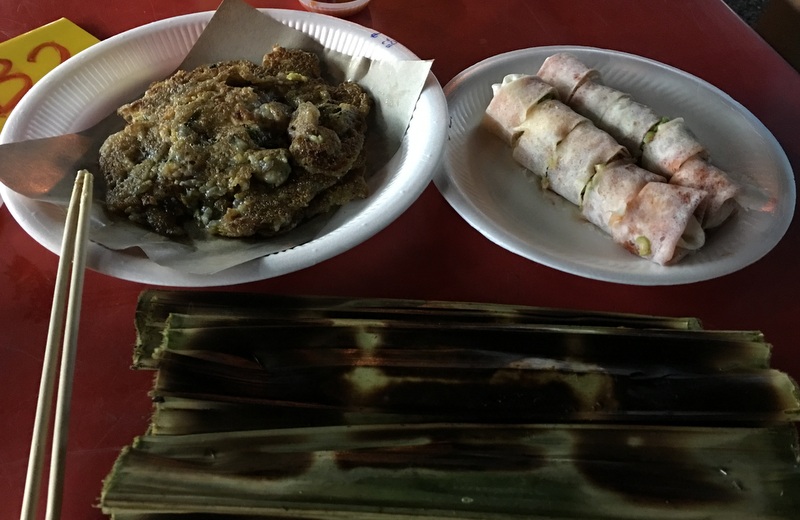 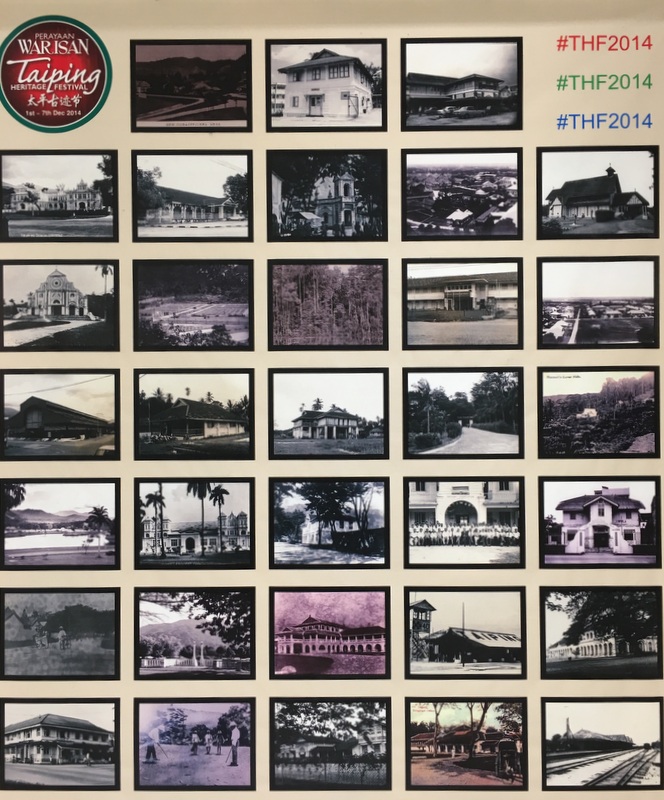 The next morning, after breakfast we first went to Pokok Assam. My THS friend Amril had given a detailed description of the field were the tombstones were to be found. Landmark was a huge tree with a small Hindu temple. in one corner of the field.

A huge tree with a shrine

A statue inside the shrine

Exploring the field, we found a number of isolated tombstones. Some of them had engravings, which Aric could decipher as being Chinese. No Japanese tombstones. But one of my friends who lived in Pokok Assam as a teenager, told me that he had taken Japanese officials (?) to the graves. He thought that maybe the remains had been exhumed and taken back to Japan. Another THS friend thought the existing tombstones might have been erected for people who had died in the hospital without next of kin. It was an interesting excursion.

Here a collage of the tombstones we found

On our way back home we still had time enough to visit Tasik Cermin, the “secret” Mirror Lake near Ipoh. I had been there before, Aric would like to have a look himself. The lake is located in an active quarry and can only be reached through a tunnel. There was a warning sign at the entrance of the tunnel that access was not allowed because a few months earlier a piece of rock had fallen down and damaged the platform. We trespassed and had a (quick) look.

End of the tunnel

The quarry is located only a few hundred meters from the trunk road no 1. Driving back we noticed a sign for a Chinese temple. There are several well known temples in this region, for example Kek Lok Tong and Sam Poh Tong, but this one was new for us. The name of this temple is  Da Seng Ngan. The caretaker said it was actually an old temple, but long time covered by a landslide, and only rediscovered in 2006. More information can be found here .

As you can see in the GE map below, there are many temples on the slopes of Gunung Rapat. Could become an interesting new project…:-) 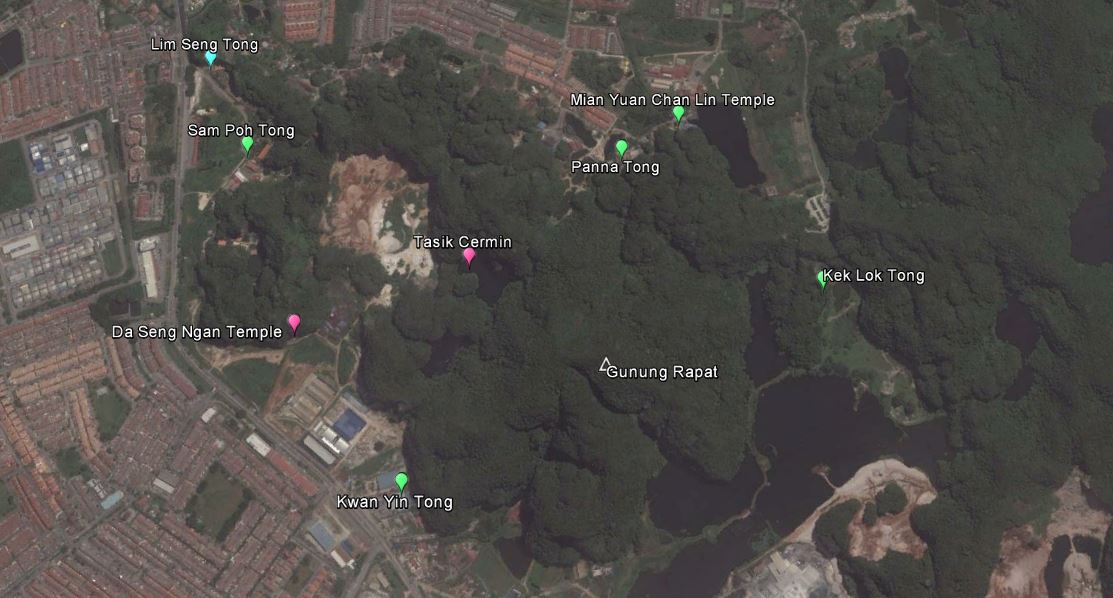