On 28 January 2017 the Year of the Rooster started. I had created a New Year card, using a picture of a magnificent rooster belonging to a friend of mine. 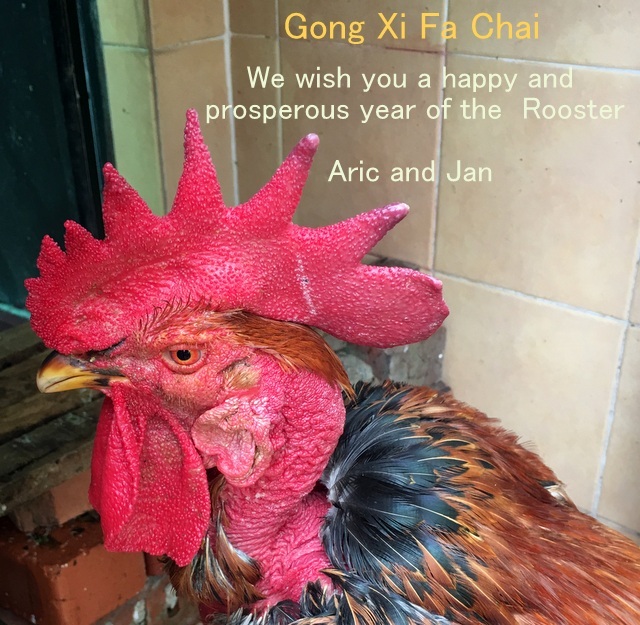 The Chinese zodiac has 12 signs and 5 elements (water, fire, earth, wood and metal). This time it is the Year of the Fire Rooster.

Sometimes it is also called Year of the Chicken or even Year of the Cock, because the Chinese character used, 鷄 or 雞  , is gender-neutral

As usual Aric had gone back to his hometown Parit Baru a few days earlier, to organise the festivities for day 3 of the CNY. Each year there is a dress code, this time everybody had to wear a flowery shirt, else you had to pay a fine…:-). There would be a BBQ party, a lottery and a  competition for the most original/beautiful shirt.

When I arrived on day 3 late in the afternoon, the preparations were already in full swing. It is a tradition that I visit a waterfall with my friends on day 3, but this time we failed to reach the planned waterfall after a long hike. Here is my report: An unsuccessful waterfall trip. So I was rather exhausted when I reached the family house. But in this picture I still look quite fresh with my new shirt and surrounded by flower girls..:-).

Aric had bought my flower shirt, told one of his cousins about it, who liked it so much that she bought an identical shirt for her husband…:-). 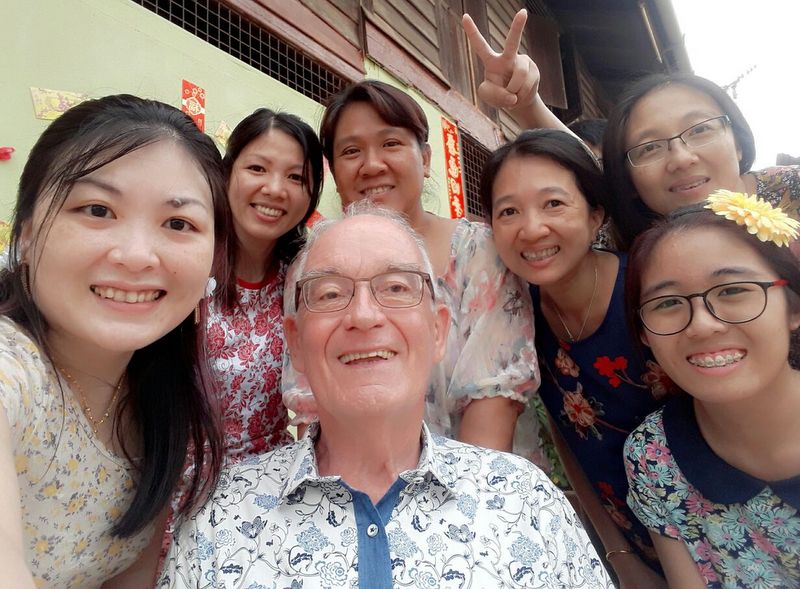 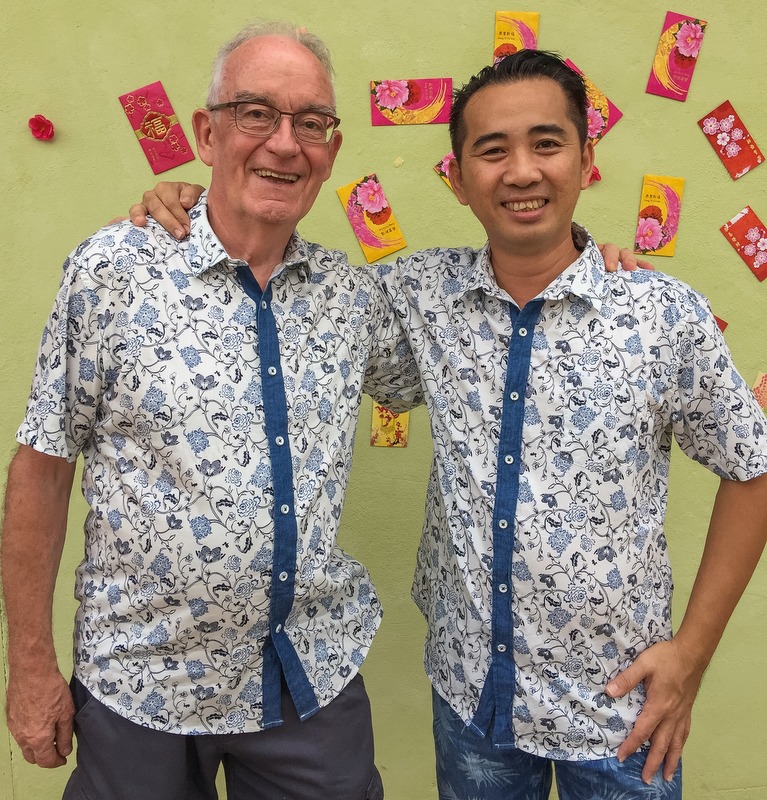 Of course many, many pictures were taken. Aric, as MC, was very busy, but still found time for some pictures. He is very popular with all the nephews and nieces

He is a nice uncle

Look who is that!

In the kampung house in Parit Baru three families have been living together, Aric’s late father and two of his uncles. That explains that there is such a crowd during CNY, when all the children and the (many!) grandchildren are coming back to their hometown.

Before it gets dark, group pictures had to be taken. Here is a picture with everybody in front of the kampung house. 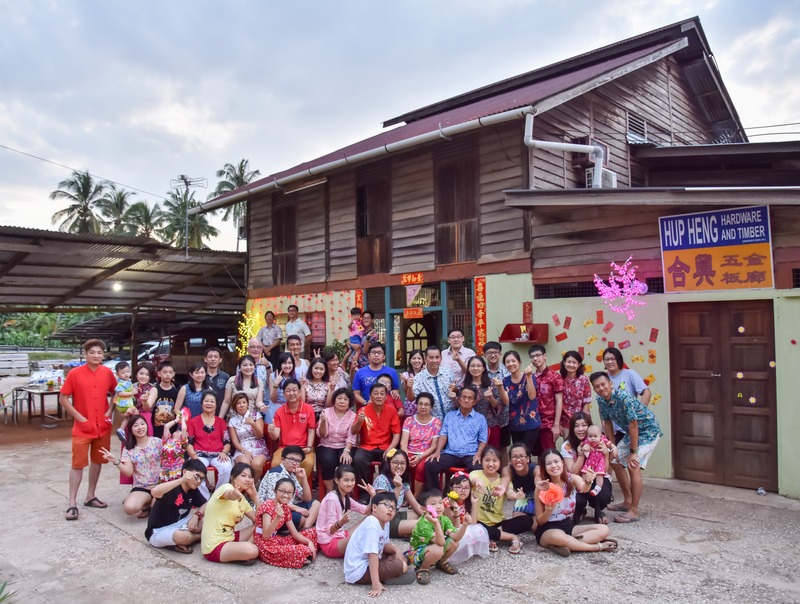 In the next picture, Aric,  who was the photographer,  has split the group in families. He has five uncles, nr 1,3 and 6 are living in Kuala Lumpur. To the right the family of Uncle no 4, then the family of Aric’s father (no 2), followed by the family of Uncle no 5. To the left Uncle no 3 and 6 with a few family members. Uncle no 6 and three Aunties are not present. Nine siblings!  I find it not always easy to remember who belongs to which family, so this is a useful picture for me …:-)

Two more group photos, one with  all the ladies, and one with Uncle no 5 and his family. 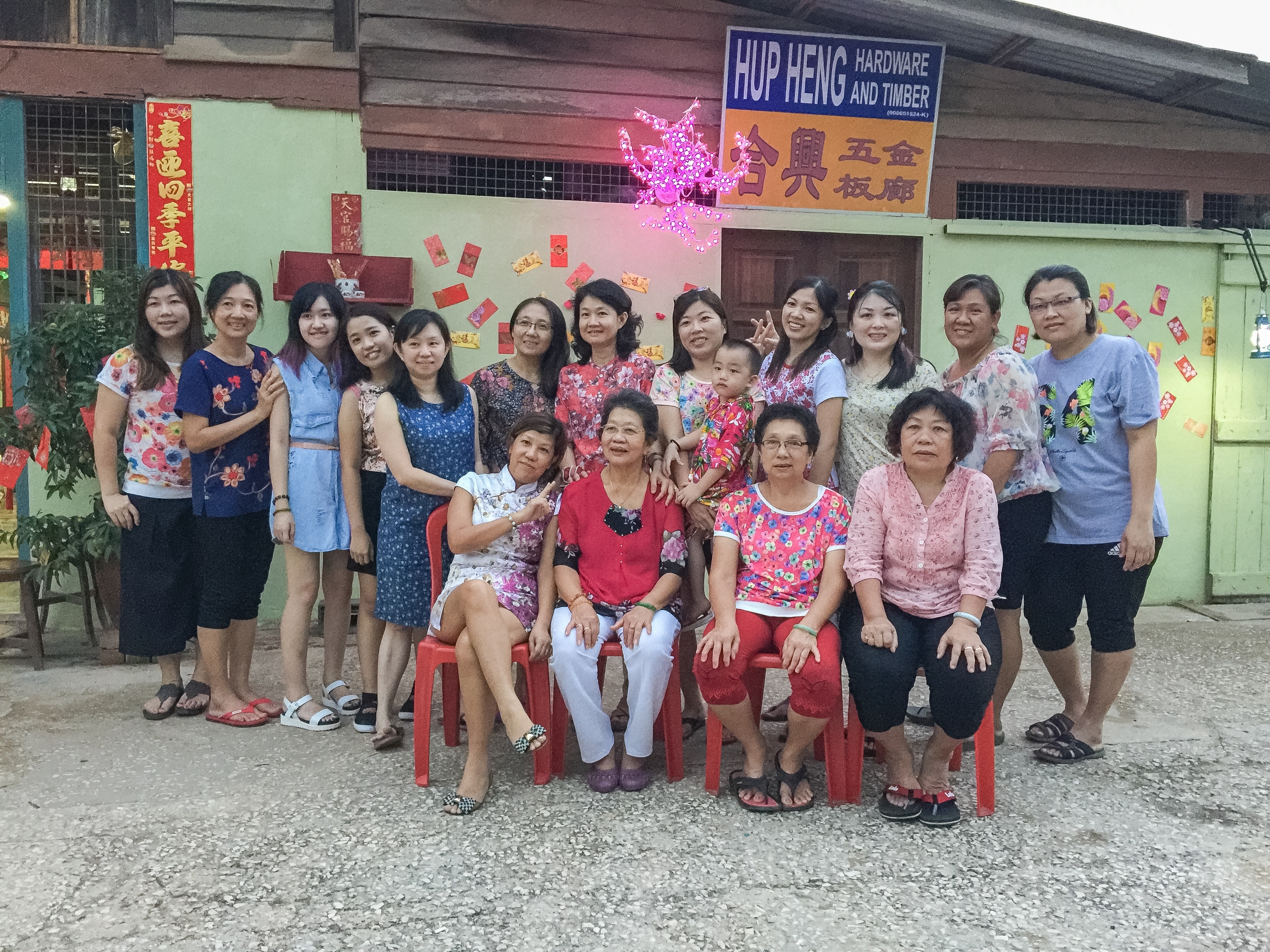 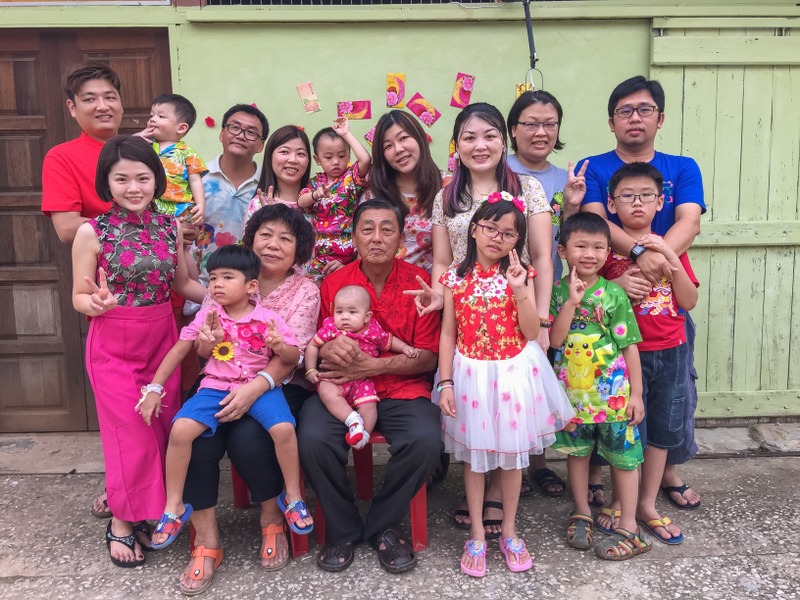 Aric had planned a few fun activities. One was a competition for the most original/beautiful floral shirt. In the left picture the seven selected competitors. The guy at the right could not find a suitable shirt and had asked his daughter to paint flowers with watercolors on a white t-shirt. Not surprisingly he won the first prize…:-) 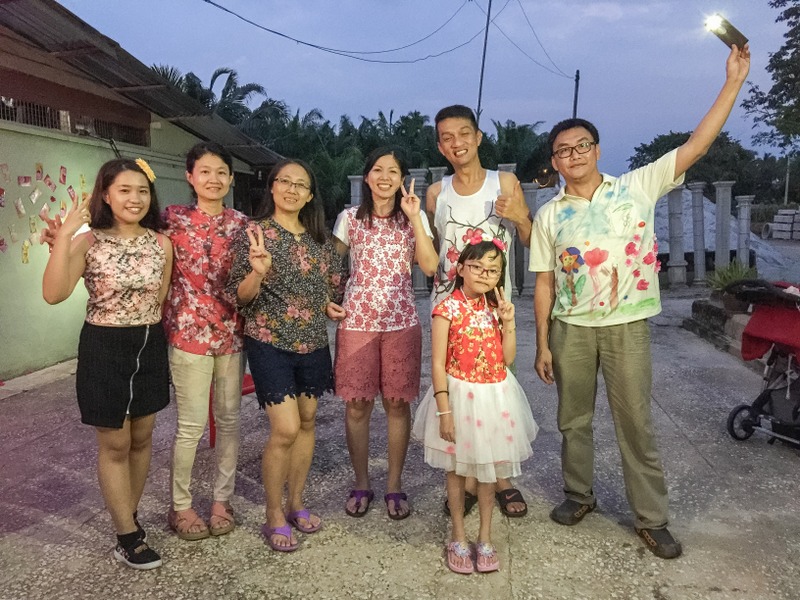 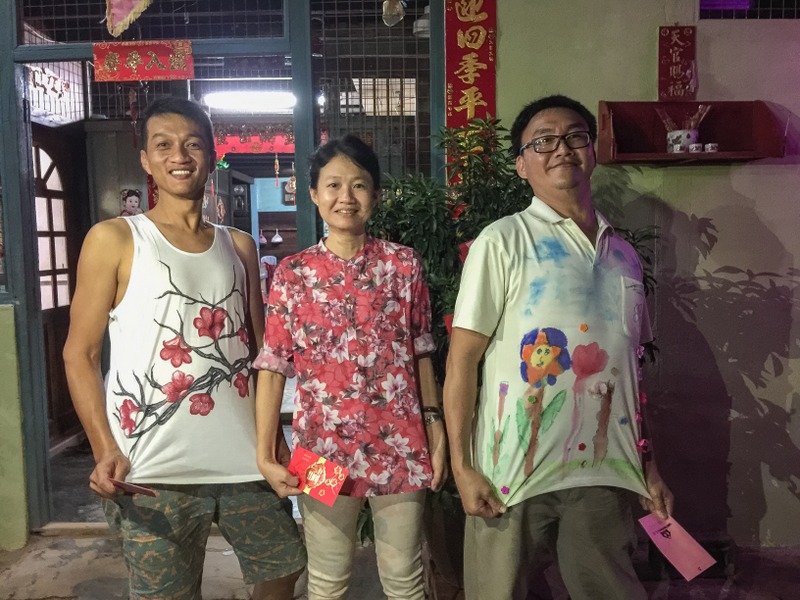 Then it was time for food, lots of food. For example 500 sticks of satay….:-) And there  were oysters! Huge size, most people liked them barbecued, I preferred them raw. Delicious. 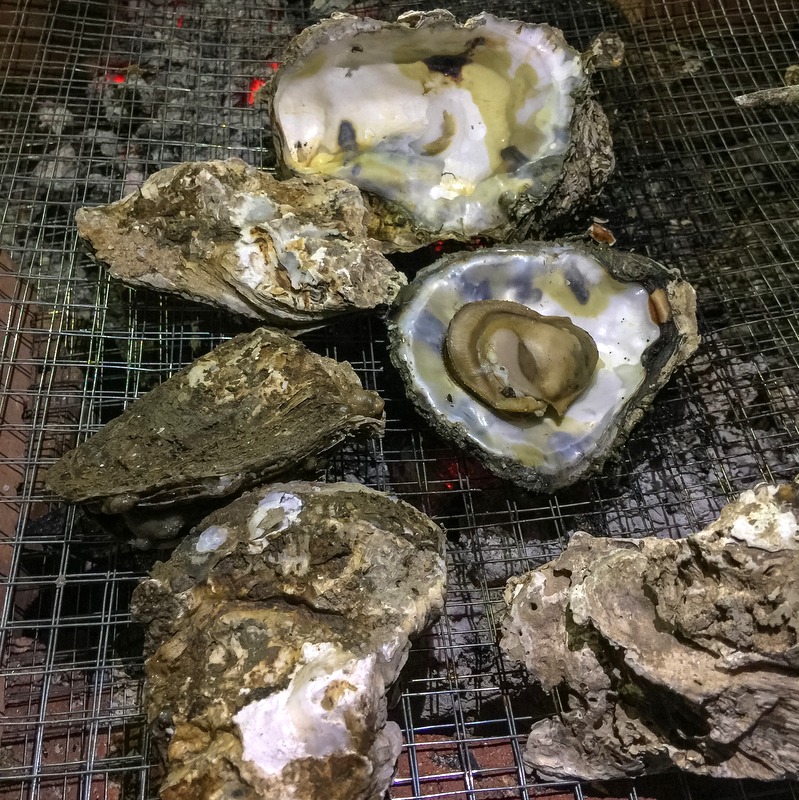 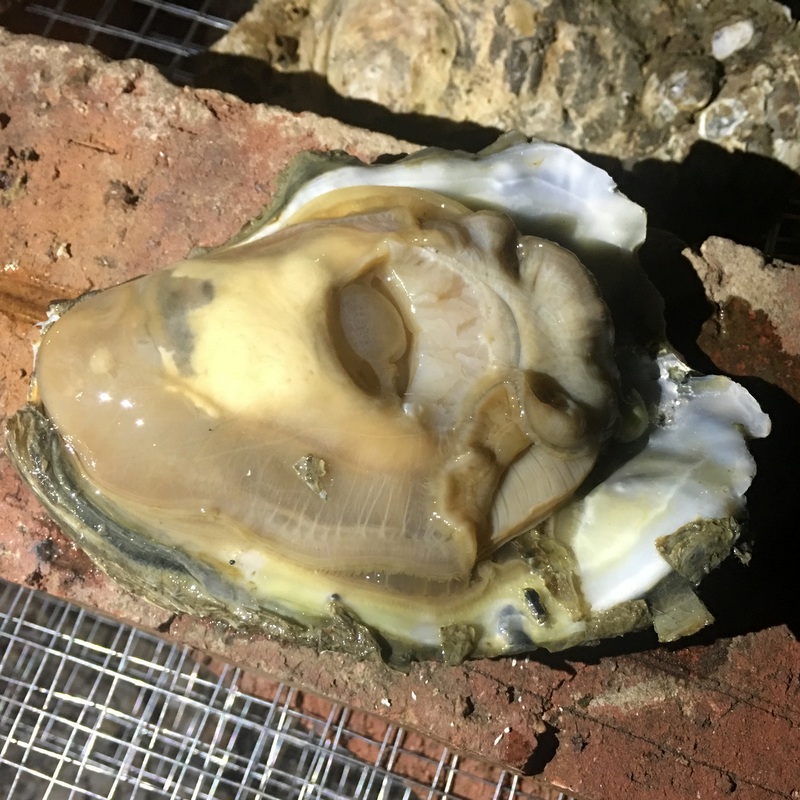 The last activity was a lottery. Ang pow envelopes were attached to the wall of the house in two sections, one for the kids and one for the adults. Everybody had to pick an envelope, and three  envelopes contained a piece of paper with a number written on it. I am never lucky with this kind of games, but this time I had a paper with a 2, meaning the second prize!

Which one you want?

I received ang pow too

Although very busy, Aric had still found time to create his own CNY-card 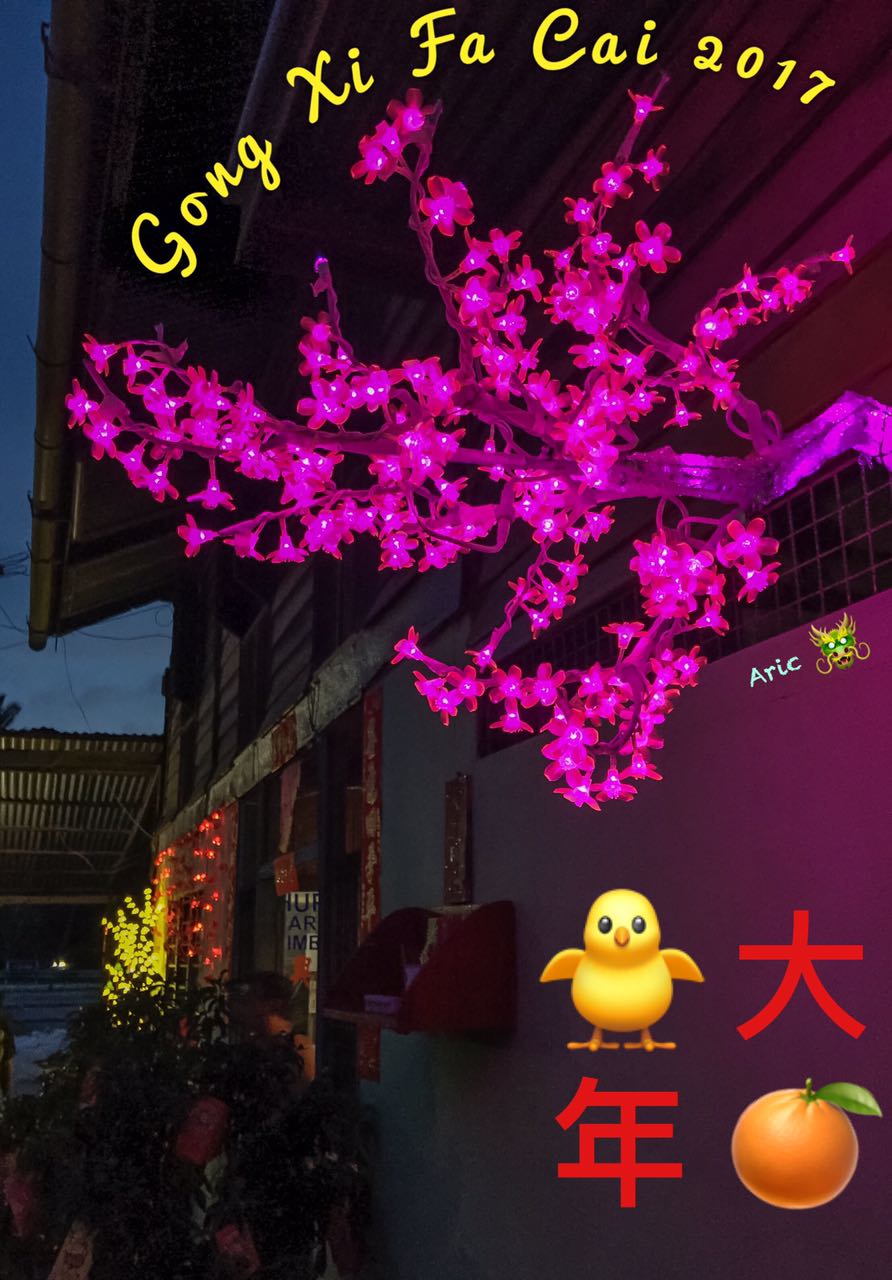 I wish all my followers