Yesterday I have revisited the Nyangung waterfall in Pahang. The Nyangung fall is a powerful waterfall in the Perdak river, near Telemong. Further upstream is the equally impressive Seminyang waterfall, which is more often visited. The trail head for Nyangung is not easy to find and it is a scramble down a steep slope to reach (which is unusual!) first the top of the waterfall.

Here my waterfall kaki Rani is standing near the top of the fall and in the picture to the right he is exploring the way to go down. For comparison, in both pics you see the same tree fallen across the river. During this trip I have made several short video clips. Click here to view what you see and hear from the top. Notice the same tree, and also, deep down, the bottom of the fall. 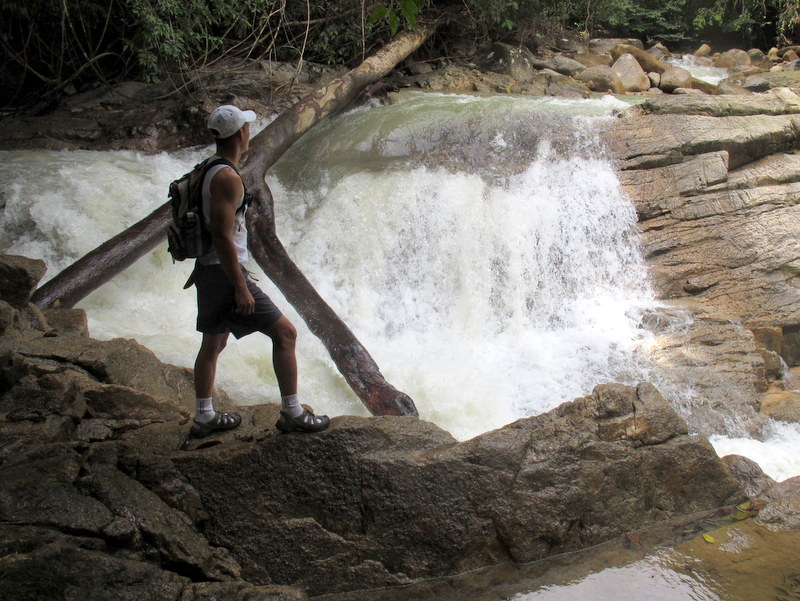 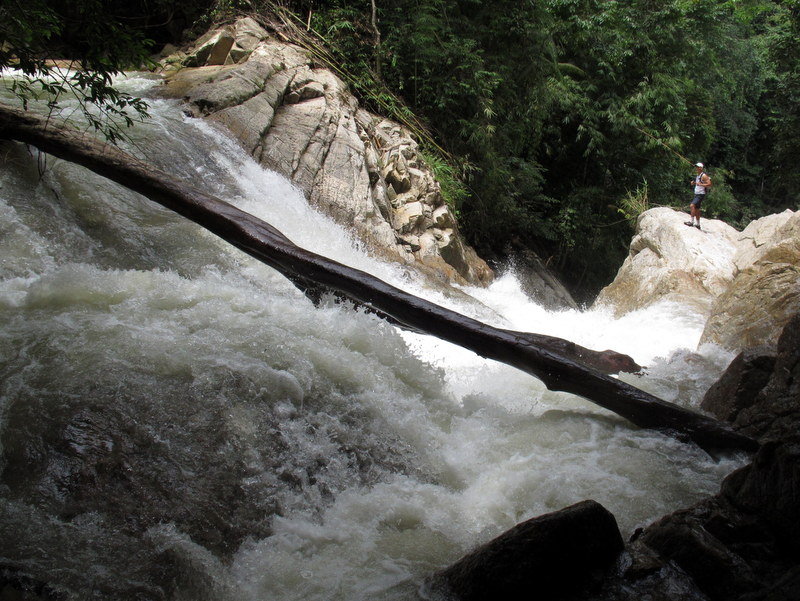 Going down you have to be careful, rocks may be slippery, in which case it is better to keep right of the rocks and use trees and shrubs as a support. Luckily we had splendid weather. In the picture below you see Rani on his way down in an exposed position…:-) Imagine the thunderous roar of the falling water. 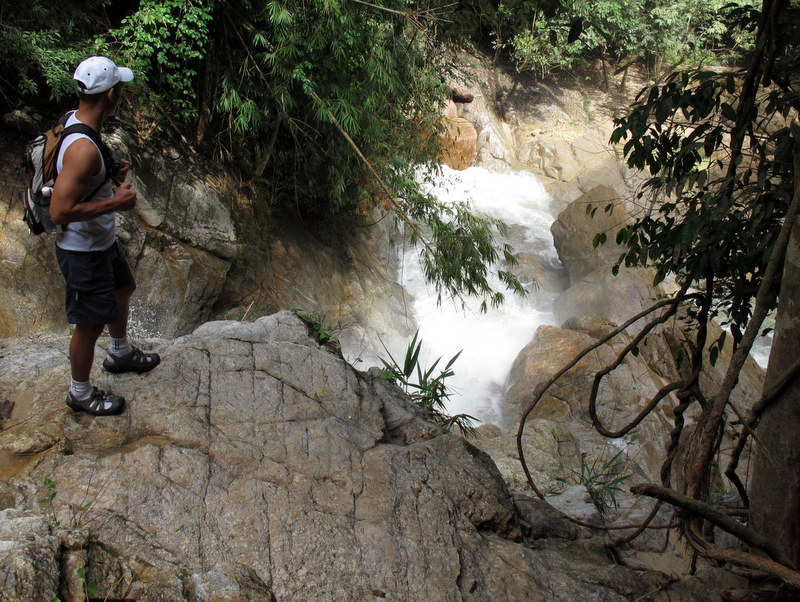 When we had arrived at the bottom of the fall, we could not see yet the fall in all its splendour. We had to cross the river for that, and the current was strong and turbulent. Personally I would not have dared to cross, but daredevil Rani wanted to give it a try and looked for a possible passage. Here he is exploring. He managed and even asked me to follow him. I did..:-) 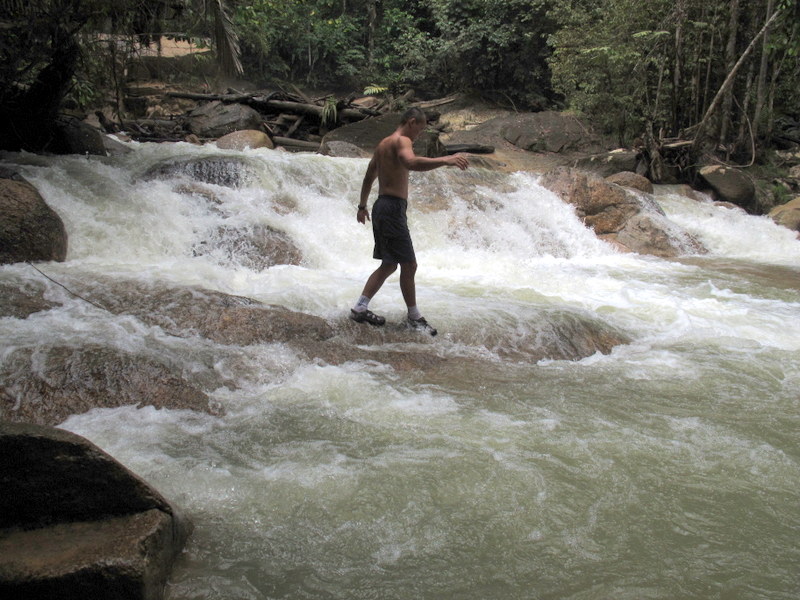 From the other side of the river we had a beautiful view of the fall. See the picture. And click here for a YouTube clip. 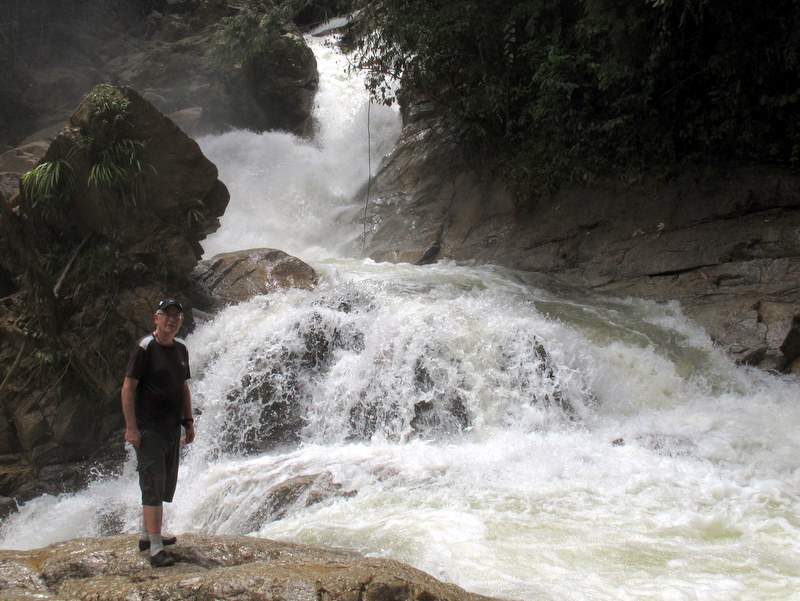 While crossing we had left all our barang behind, but there were nice sunny rocks on this side, a perfect place to have coffee and our lunch. What to do? I will go back, said Rani and get the stuff. So he went back, and daredevil as he is, he took a slightly different route. I followed him on video, click here. Notice how relaxed he is, even smoking a cigaret..:-) The second attempt to cross back, was successful..:-) That was actually the same way we came over.

When Rani had collected our lunch, coffee, water, put it in my watertight bag, he came back, again trying a different route. Click here to see what happened, and you may understand how I felt when I saw him suddenly being swept away! But I did not panic.

Because I trusted him to come back and he did! Safe and sound. Click here. But of course it gave me a shock. If this would have happened to me, I would not have survived. So we had our coffee and our lunch, but after that I suggested Rani to cross over, the safe way, and have a more relaxing time at the other side. Which we did…:-)

This was really an adventure for me, in several ways. Quite a few “What if” questions too.

Rani still had pictures of our first visit, almost 4 years ago. Left picture shows the situation in April 2009. I have marked corresponding points with red crosses. 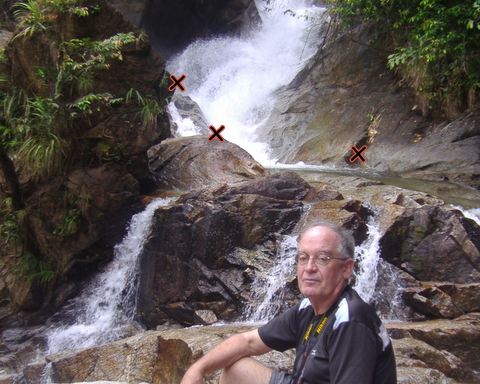 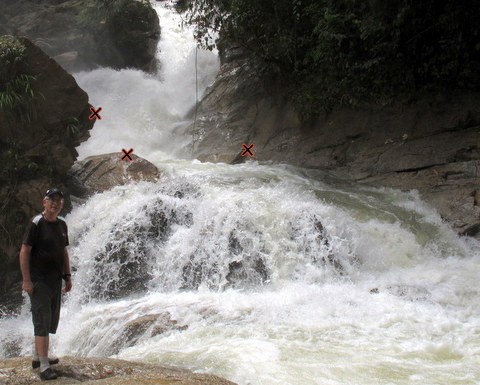 In retrospect I think it was too risky what we have done.