One year ago, on the third day of the CNY, I visited with my waterfall friends Siang Hui, Nick and Harry, an unknown waterfall in the Bubu Range, south of Kuala Kangsar. We gave it the name Lata Naga Air (Water Dragon Fall). Full report here . Sadly Harry died later last year, while on a (solo) waterfall exploration trip in Terengganu. Here is a picture of the waterfall with from left to right Nick, Siang Hui and Harry † 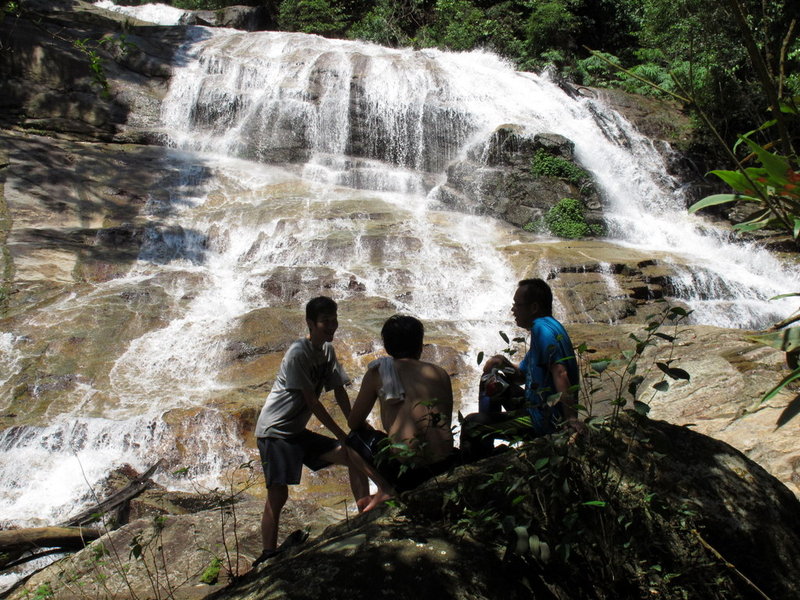 This year Siang Hui suggested a trip to another waterfall, also in the Bubu range, near Beruas. Again on the third day of the CNY. I met Siang Hui and Nick in Teluk Intan, we drove to Beruas where we met Faye. She is contributing to my Waterfalls of Malaysia website, but I had never met here. She often joined Harry’s trips and is now organising trips herself for her friends.

Access to the Ulu Licin falls is easy. From the place where we parked our cars, we could already see the first waterfall. A trail leads to the upper falls. There are three more tiers. The second tier is a beautiful curtain fall. I am posing in the pictures below, so you have an idea about the height of the falls…:-;

Quite surprising to find these relatively unknown falls so near the road. Their saving grace is that the access trail is steep. Here is pictorial report of our trip.

Top of the second fall

Remains of a water catchment

Nick and Siang Hui going down

Below the third tier

I have uploaded two short video clips to YouTube. One is from the curtain fall, the other one from the top tier

Visiting a new waterfall on the 3rd day of CNY could become a nice tradition! Why not name these falls Lata Ular Air, the Water Snake waterfall…:-)