A few days ago, a friend sent me an email with a picture of an interesting painting. 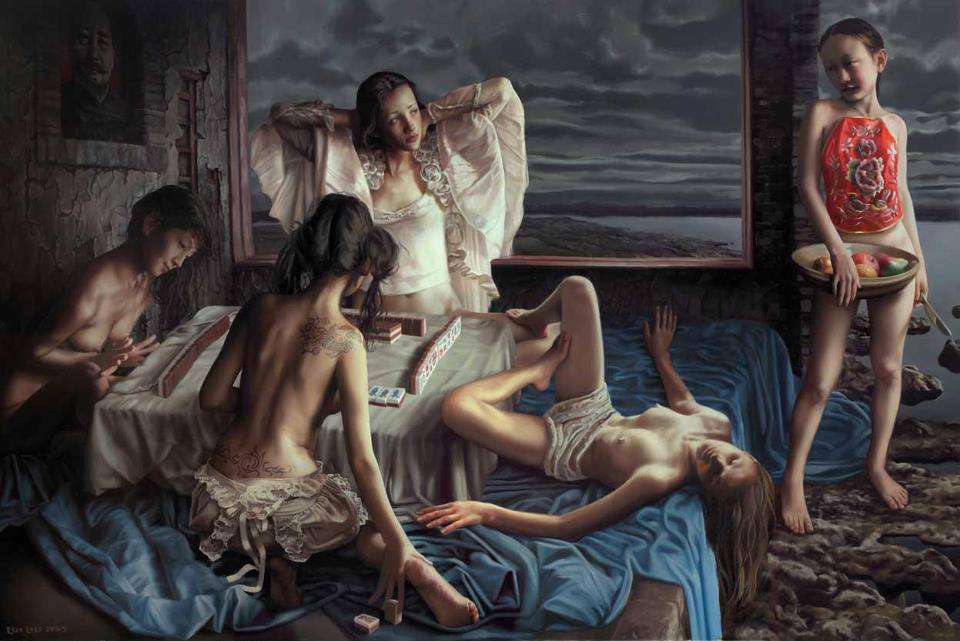 The painting is a political allegory, for an explanation see below. But first more about the painting and the painter.

The painting is named Beijing 2008 and was created in 2005 by the Chinese-Canadian painter Lui Liu. He was born in 1957 in North China and is now living in Toronto. This painting was sold at an auction last year for more than 3 million US$. 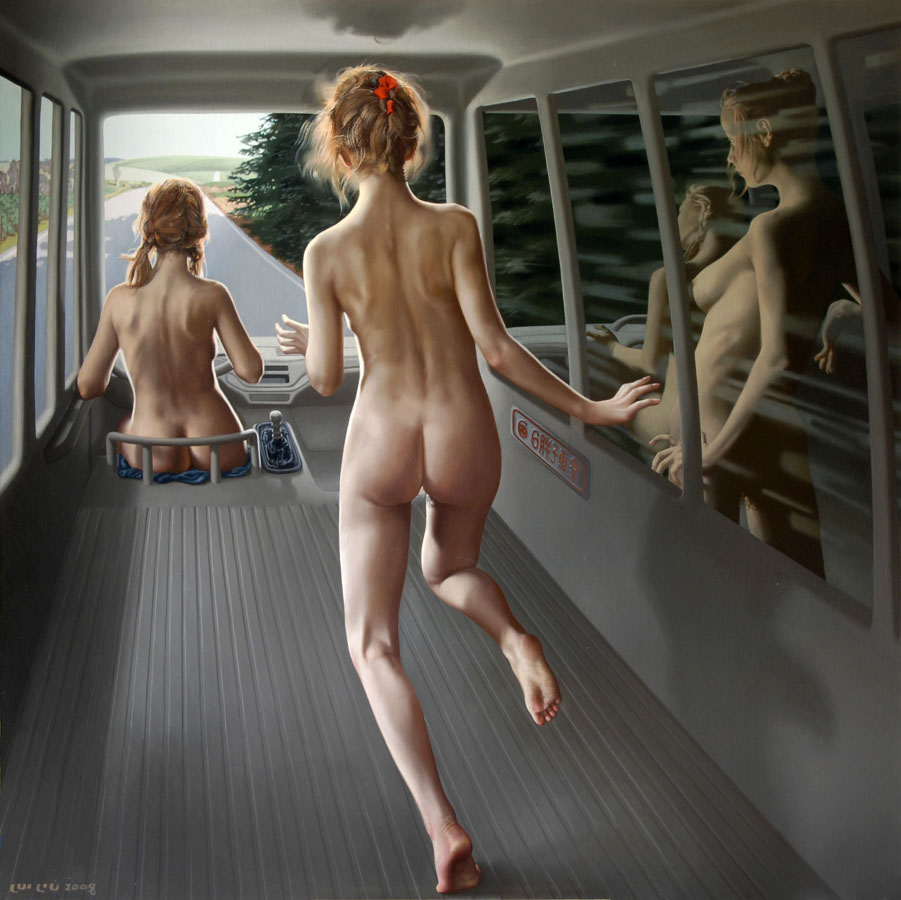 Personally I find his style of painting an interesting mixture of Magic Realism and Surrealism, similar to the paintings of Paul Delvaux (1897-1994), one of my favourite painters. See my Virtual Museum

Here is a painting by Delvaux: The Entrance to the City (1940) 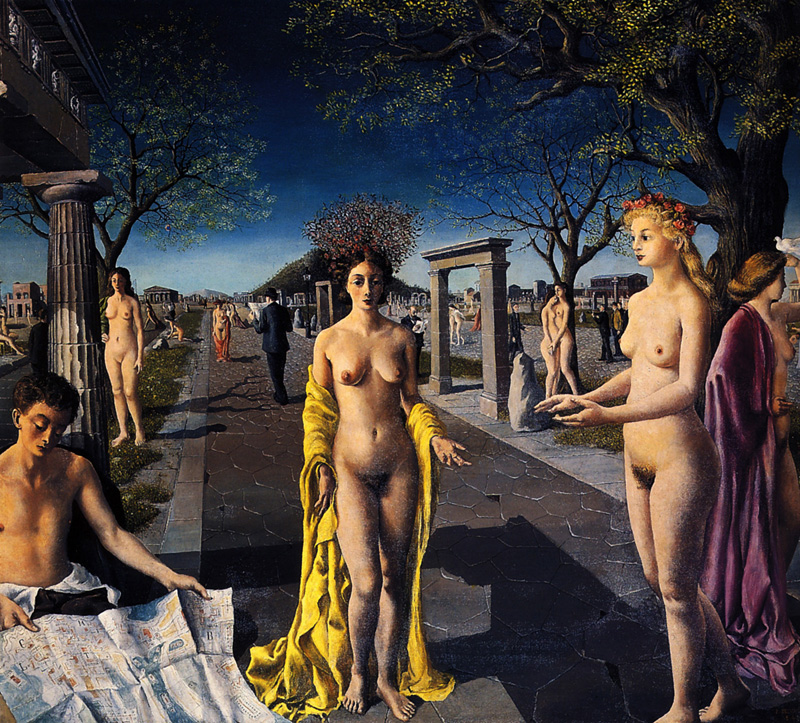 About the allegory, the title refers to the Olympic Games in Beijing, 2008. But in this painting another game is played, Mahjong. Here is the explanation as given in the email.

The woman with the tattoos on her back is China. On the left, focused intensely on the game, is Japan. The one with the shirt and head cocked to the side is America. Lying provocatively on the floor is Russia. And the little girl standing to the side is Taiwan.

China’s visible set of tiles “East Wind” has a dual meaning. First, it signifies China’s revival as a world power. Second, it signifies the military might and weaponry that China possesses has already been placed on the table. On one hand, China appears to be in a good position, but we cannot see the rest of her hand. Additionally, she is also handling some hidden tiles below the table.

America looks confident, but is glancing at Taiwan, trying to read something off of Taiwan’s expression, and at the same time seems to be hinting something at Taiwan.

Russia appears to be disinterested in the game, but this is far from the truth. One foot hooks coyly at America, while her hand passes a hidden tile to China, both countries can be said to be exchanging benefits in secret. Japan is all seriousness while staring at her own set of tiles, and is oblivious to the actions of the others in her self-focused state.

Taiwan wears a traditional red slip, symbolizing that she is the true heir of Chinese culture and civilization. In one hand she has a bowl of fruit, and in the other, a paring knife. Her expression as she stares at China is full of anger, sadness, and hatred, but to no avail; unless she enters the game, no matter who ends up as the victor, she is doomed to a fate of serving fruit.

Outside the riverbank is darkened by storm clouds, suggesting the high tension between the two nations is dangerously explosive. The painting hanging on the wall is also very meaningful; Mao’s face, but with Chiang Kai Shek’s bald head, and Sun Yat-Sen’s mustache.

At first glance, America appears to be most composed and seems to be the best position, as all the others are in various states of nakedness. However, while America may look radiant, her vulnerability has already been exposed. China and Russia may look naked, yet their key private parts remain hidden.

Russia seems to be a mere “filler” player, but in fact is exchanging tiles with China. The real “filler” player is Japan, for Japan has nothing more to lose, and if she loses just once more she is immediately out of the game.

America may look like she is in the best position, but in fact is in a lot of danger, if she loses this round, she will give up her position as a world power. Russia is the most sinister, playing along with both sides, much like when China was de-occupied, she leaned towards the USSR and then towards America; as she did not have the ability to survive on her own, she had to weave between both sides in order to survive and develop.

There are too many of China’s tiles that we cannot see. Perhaps suggesting that China has several hidden aces? Additionally China is also exchanging tiles with Russia, while America can only guess from Taiwan’s expression of what actions have transpired between Russia and China. Japan on the other hand is completely oblivious, still focused solely on her own set of tiles.

Taiwan stares coldly at the game from aside. She sees everything that the players at the table are doing, she understands everything that is going on. But she doesn’t have the means or permission to join the game, she isn’t even given the right to speak. Even if she has a dearth of complaints, she cannot voice it to anyone, all she can do is to be a good page girl, and bring fresh fruit to the victor.

The final victor lies between China and America, this much is apparent. But look closely; while America is capable, they are playing Chinese Mahjong, not Western Poker. Playing by the rules of China, how much chance at victory does America really have?

1 thought on “An Interesting painting”