For quite some time Taiwan has been on our list of countries to visit and this year we finally booked an Air Asia flight to Taipei for a 12-day trip. To be honest, our primary reason was… the Taiwanese food! Aric likes to watch Taiwanese TV programs about food and had collected a large number of dishes to try out. But of course there was also culture and nature..:-)

As usual Aric had done  a thorough research for the trip. He suggested that we should not  try to cover the whole country (size a bit less than the Netherlands), but limit ourselves to the northern part, Taipei and surroundings. Here is the map of our traveling in Taiwan. The GPS tracks are often broken, in the town because we used the (underground MRT) a lot and in the mountains because of the many tunnels. Click on the map to enlarge. 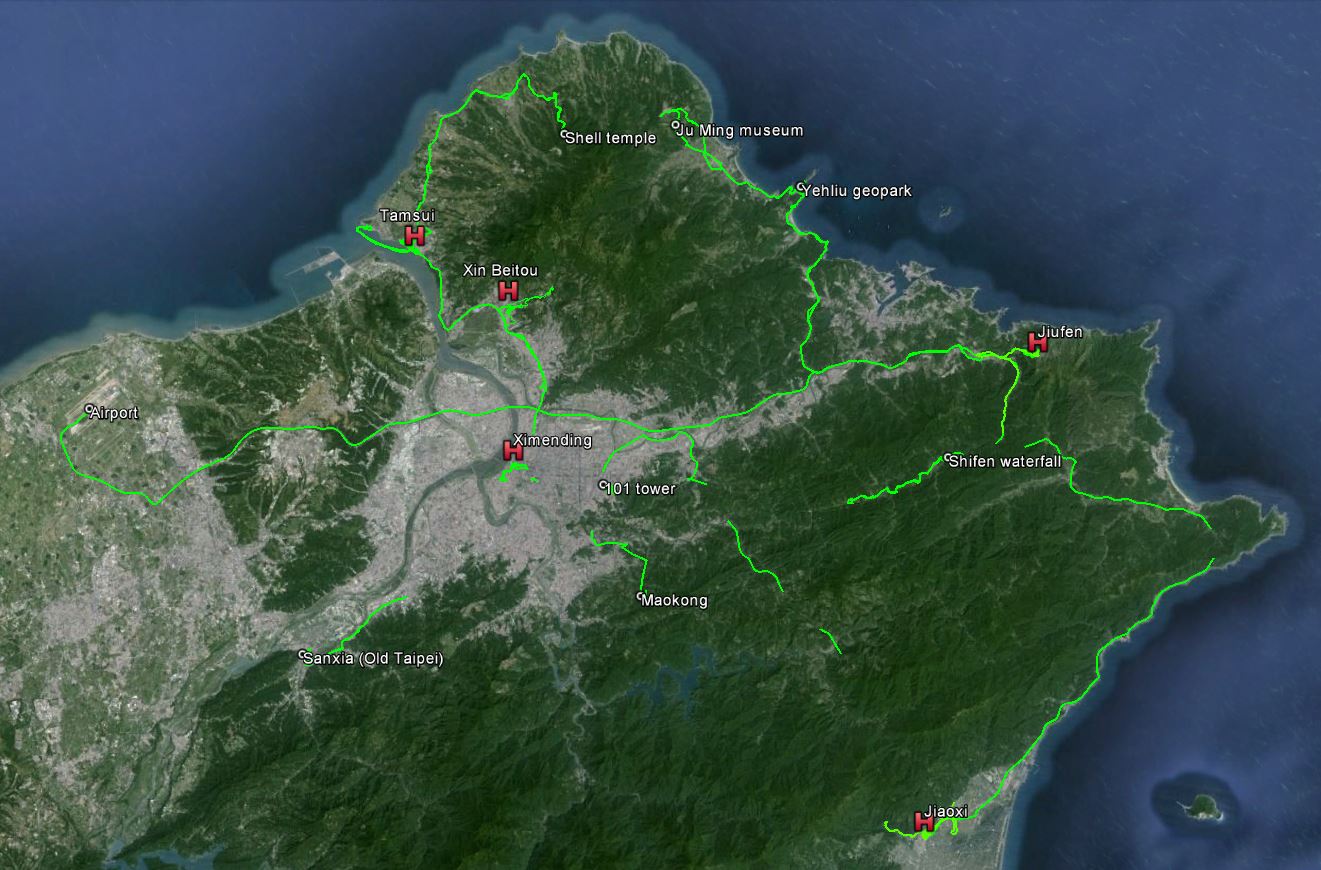 Actually we could have stayed in one hotel in Taipei center and  make day trips from there out. Instead we decided to move around to various nice boutiquehotels. We started in Ximending, the entertainment and shopping district of Taipei. After three days we took the MRT(!) to Tamsui, a suburb of Taipei where we stayed two nights in a nice “room with a view”. Back to Xin Beitou, one night, for the hot springs. After that by bus to the East coast, Jaoxi, two nights in a beautiful apartment with our own private hot spring!. The last three nights up in the hills, in Jiufen, another apartment with a view. 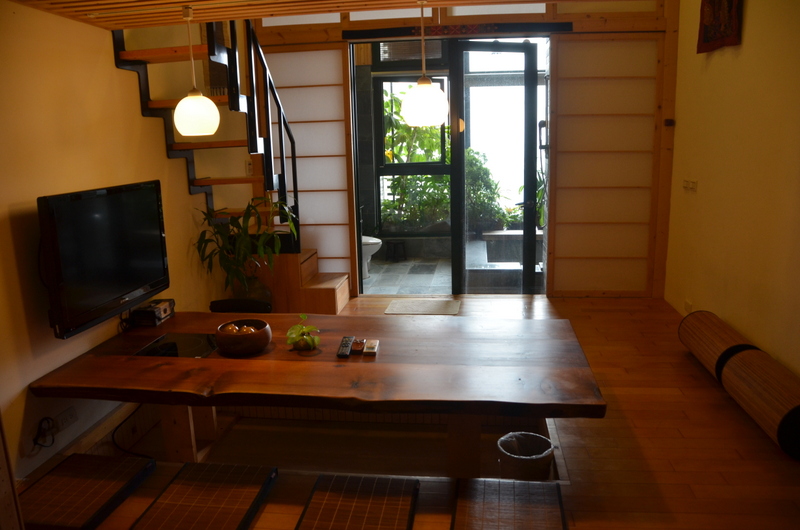 Our apartment in Jaoxi, in Japense style, with a private hot spring bath!

When you visit Taiwan, of course you have to visit the Taoist/Buddhist temples. Taipei has a number of famous ones, but you find them in every town and village. They are well maintained and beautiful, but also basically the same…:-). So after a number of temples your reach your saturation level.  Here only  a limited number of pictures. Below is the entrance decoration of the Qingshui Temple in Taipei

The (modern) architecture of Taipei is rather monotonous and a bit boring. Of course there is the “outstanding” landmark of the 101 tower, until a few years ago the tallest building in the world. Personally I think the Petronas towers are much more impressive. Of course we had to go up in the ultra-fast elevator (600 m/minute!) to the observatory on the 91st floor. 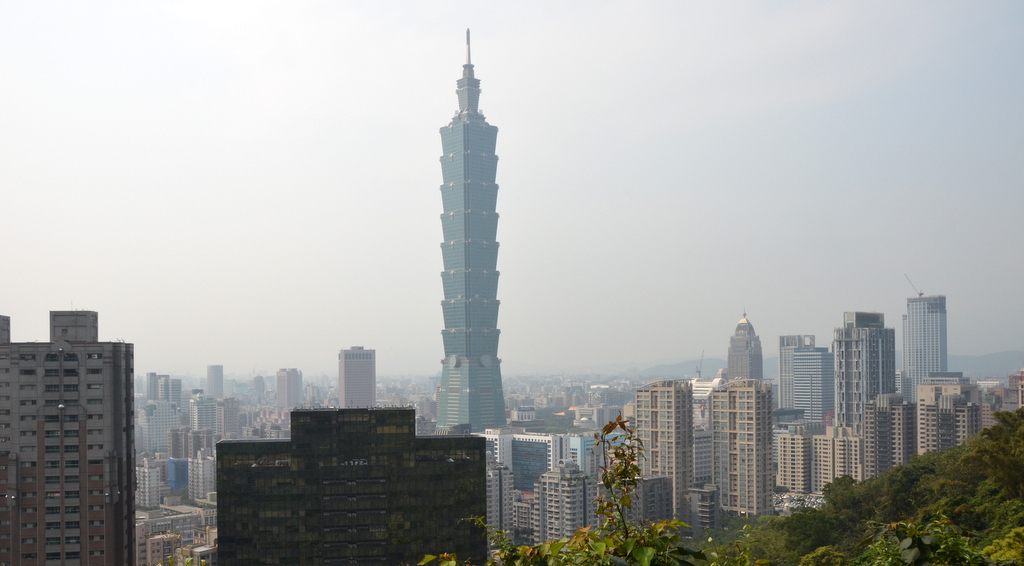 The 101 tower as seen from the nearby Elephant mountain

But I am taller

View from the Observatory

More impressive is the Memorial for Chang Kai-shek, the former president of the Republic of China. It was opened in 1980, on the fifth anniversary of his death. During our visit there was an amusing panda event in the huge square in front of the memorial hall, attracting a big crowd of spectators. Many school children, it was nice to see how disciplined they behaved. Same with the people waiting for the MRT in an orderly queue. Our general impression of Taiwanese people is very positive, they are friendly and eager to help. 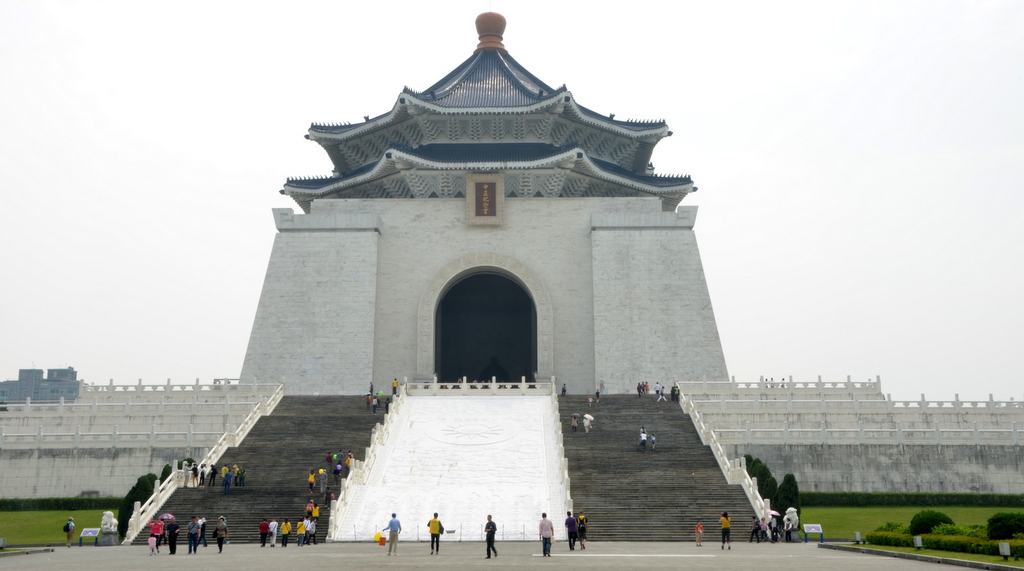 We had a busy program, especially the first few days. We visited Sanxi (Old Taipei) where the “Old Street” was built during the Japanese occupation (1895-1945). The Red House is another example of Japanese architecture. Of course we went to the Shilin night market with its underground foodcourt. The MRT transport system makes traveling easy, but you also still have to walk quite a lot!

Queuing for the MRT

After three days in Ximen we took the MRT to Tamsui, a sea-side town, but still part of what is called New Taipei City. Different atmosphere, university town, a bit artistic. We visited the Santo Domingo fort, dating back to Dutch colonial times, and the nearby British Consular Residence. And we took the ferry to the harbour to see tne famous sunset, but it was cloudy. You can not have everything…:-)

Interior of the Residency

We had chosen this time of the year for our Taiwan visit, because we were hoping to see the cherry blossom. The season lasts only a few weeks and is not really predictable. We were a bit late, but still we could see some. And there were other flowers as well, as it was the beginning of spring.

From Tamsui we made a trip to a remote, little known jewel: the Shell Temple (Fufuding temple), completely constructed from sea shells and corals. Quite unbelievable. We had to hire a taxi to go there, but it was worth the effort. 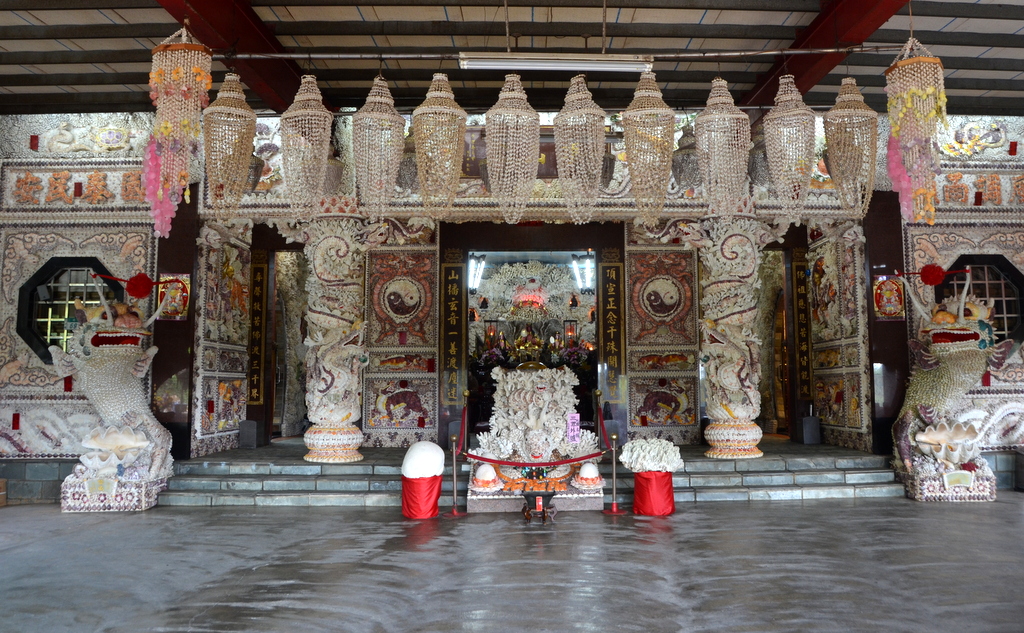 Here are a few pictures of the interior. There is even a kind of cave behind the shrime, where you can crawl through. Good that there were no other tourists…:-)

One of the famous tourist attractions in Taiwan are the hot spring baths. The public bath culture was introduced during the Japanese occupation. Originally they were free of charge, with a separate pool for men and women, and you are bathing naked. These traditional ones are getting less in numbers, being renovated and modernised, mixed, you have to pay and you need swimwear.

A famous hot spring region is Xin Beitou, where we went next. There is a lot of geothermal activity around there and Aric had discovered a remote traditional public bath. We were quite shy to enter, because we were warned that you have to follow the rules, or you will be scolded…:-). But it was a nice experience and I was scolded only once. Mainly older men, who prepare their tea, and chit-chat a lot. We tried another one in Xin Beitou, also a traditional one. And we went to the original Japanese one, now a museum.

After Xin Beitou we took a bus to the West Coast, to Jaoxi, another hot spring center. Here Aric had booked a room with a private hot spring bath! In the town on several places there are popular public foot baths. We even had lunch in a restaurant while soaking our feet in the hot water! Also here we found a traditional bath and I even managed, a bit sneakily, to take a picture inside the bath hall…:-) Of course we also used our own private bath. It is easy to get addicted!

Restaurant with a bath

Our last stop was in Jiufen, a small town in the hills. Popular tourist attraction but most visitors came on a day trip, so in the evening it became quiet. It was good that we had brought our jackets, because it was a lot colder here. From here we made two day trips. For the first one we hired again a taxi. First we went to…. a museum!

Ju Ming is a Taiwanese sculptor with an international reputation. He has created his own museum in the hills north of Taipei. I had never heard about him, and the museum was really an eye-opener for me. We spent quite a long time, walking around as many of his works are in the open air 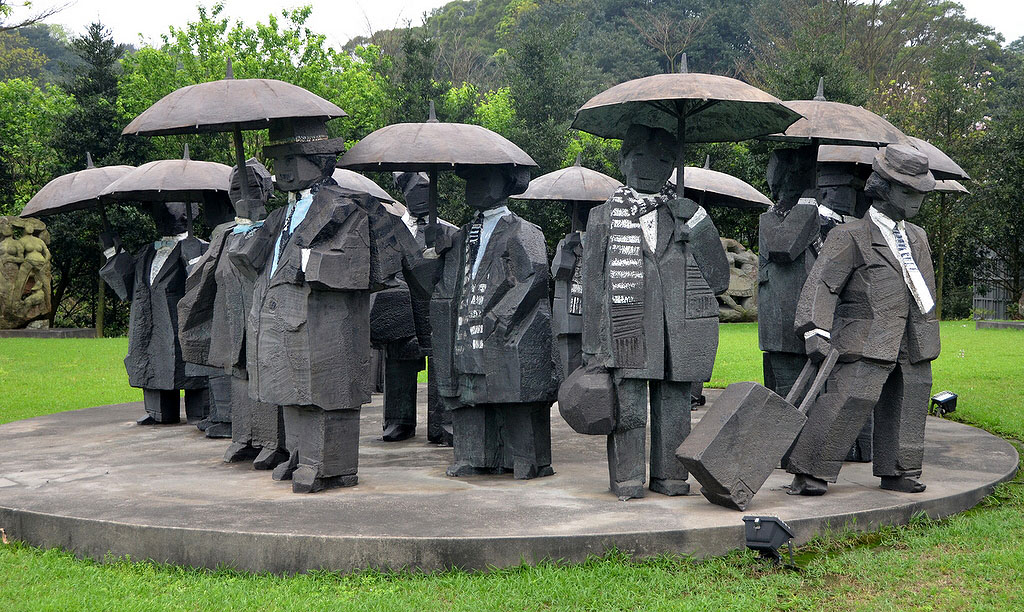 After the museum and lunch we visited the Yehliu Geopark, another surprise. Erosion has over the millions of years created an amazing collection of strange rock shapes. The most famous of them is the Queen’s Head. In earlier days you could just touch this rock formation, but now you can only view it from some distance, because unscrupulous visitors scraped some of the soft rock to take home, causing the neck of the queen to become thinner and thinner. 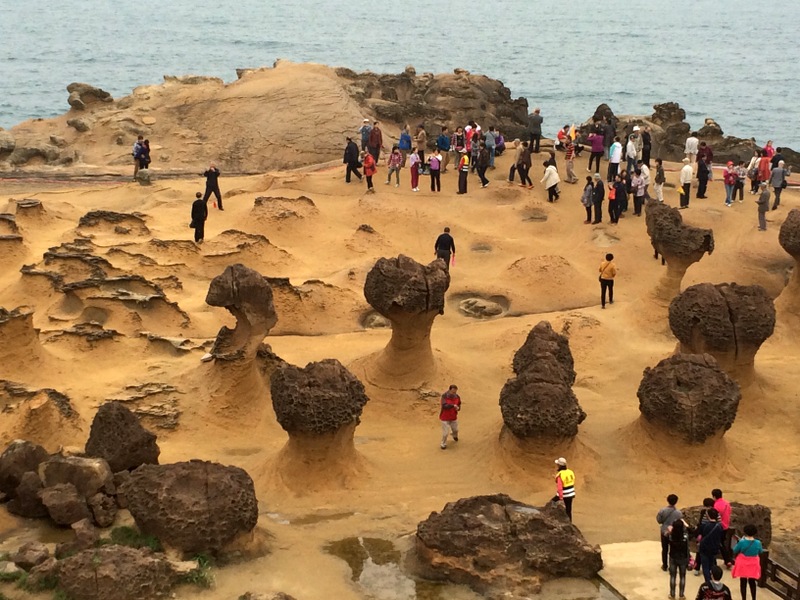 Me on my throne

The last day we took the train into the hills. In the past this was a coal mining region, now it has become a popular tourist destination.When there is no train coming, the tracks are used for walking. Couples leave bamboo cylinders behind with love(?) messages, a variation on the love locks you find in for example Paris. Another popular activity is to paint a message on a Chinese lantern and let it fly away as a hot air balloon.

The most famous tourist attraction along this train route is the Shifen waterfall, considered to be the most scenic waterfall of Taiwan. A real beauty. From Jiaoxi we had already visited two other waterfalls. Here are the pictures. 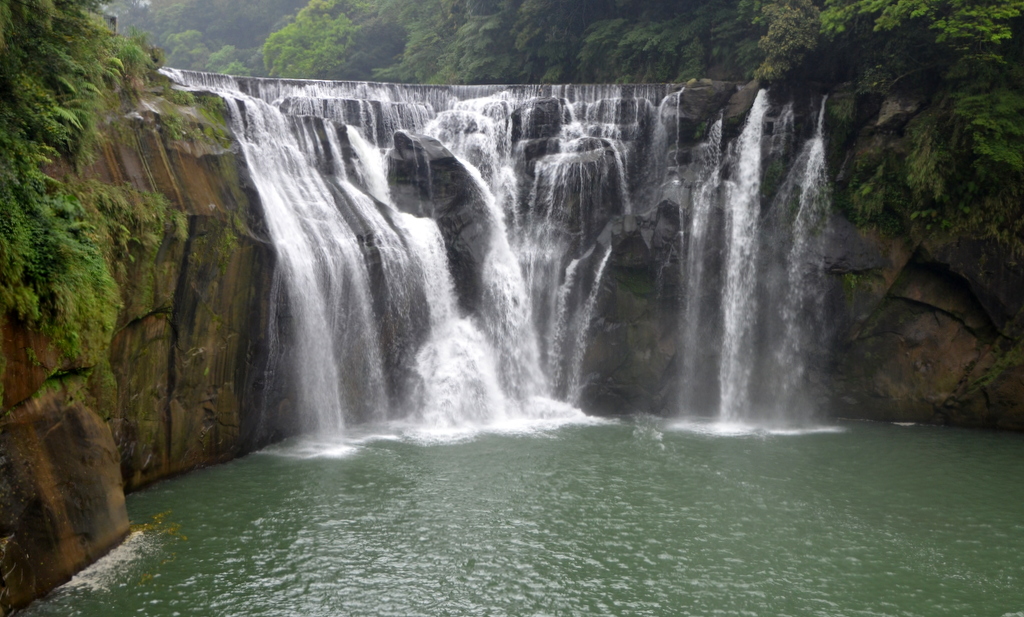 It was a wonderful trip, and we are already looking forward to visit Taiwan again.

But wait, I almost forgot to mention the food…:-) And I started this blog, mentioning the Taiwanese food. Well, we have done our best and tried as many different Taiwanese specialties as we could find…:-). It was a pleasure every day. Lots of pork, lots of delicious oysters. Menus are in Chinese, so I had to trust Aric. Here is a collage of what we had,  I don’t know the names. 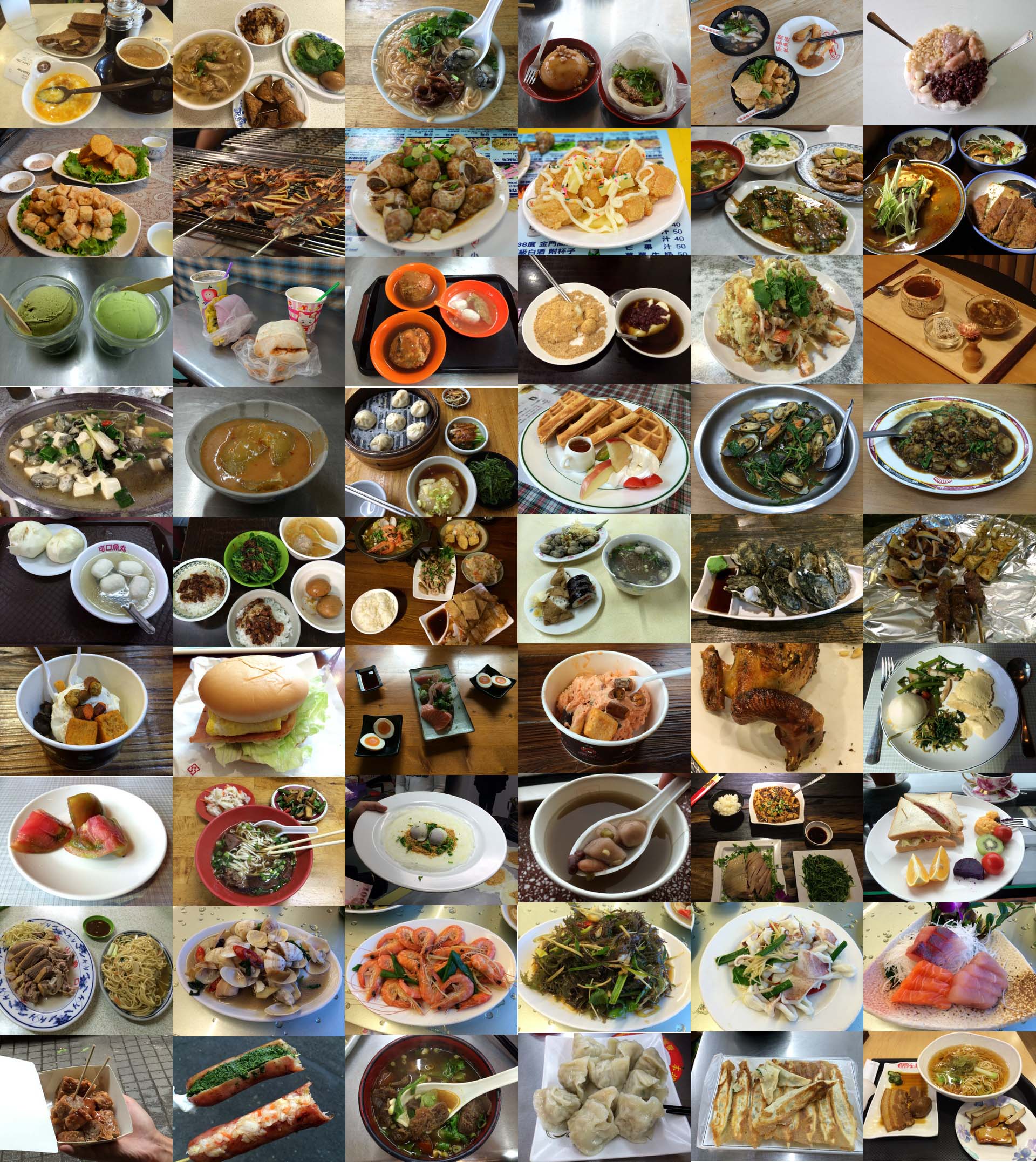 I also shot a number of video’s, but I will put them in a separate blog, as this one is already longer than usual.