When you have been following my Stuif’s adventures, you know that Taiping is my favourite town in Malaysia. So it is not surprising that I am a member of the Taiping Heritage Society (THS). Recently they organised a day trip to the Lenggong region and I decided to join. Actually I had visited most of the attractions on the program already, but it was a good opportunity to get to know more THS members…:-)

Departure was at 7 am from the Taiping Tesco. About 40 members took part in the trip, so a bus was chartered for the transport. After signing an indemnity form, we received our seat number and off we went. (click on a picture to enlarge it)

The first stop was at Lenggong town for a dim sum breakfast. Next we went to the Lenggong Archeological Museum, where we were welcomed by the Assistant Curator, Puan Nuraidah. We watched a nice, well-made documentary about the archaeology of the Lenggong valley, where in 1991 an 11.000 year old skeleton was found in one of the many limestone caves. Now known as the Perak Man. During my earlier visit of the museum, only a copy of the skeleton was shown, but in 2012 the Lenggong Valley was listed by UNESCO as a World Heritage site and just a few months ago, the original skeleton has been brought back to the museum.

The copy of the skeleton to the right

When the museum was built, an artificial cave was created for the (copy of the) Perak Man. Now it is still there, but half in the dark, while the original has been placed in the same cave. A rather messy layout, hopefully temporary. When the Perak Man died, his grave will have been decorated by burial gifts. Now his skeleton is surrounded by modern technology. He would have been very surprised if he had known..:-)

Originally the plan was to visit the Gua Runtuh, where the skeleton was found, but it is out of bounds now, probably will become a tourist attraction. When I visited the caves in 2007, you still could enter freely, although after a stiff climb. Here is a picture from my archive. 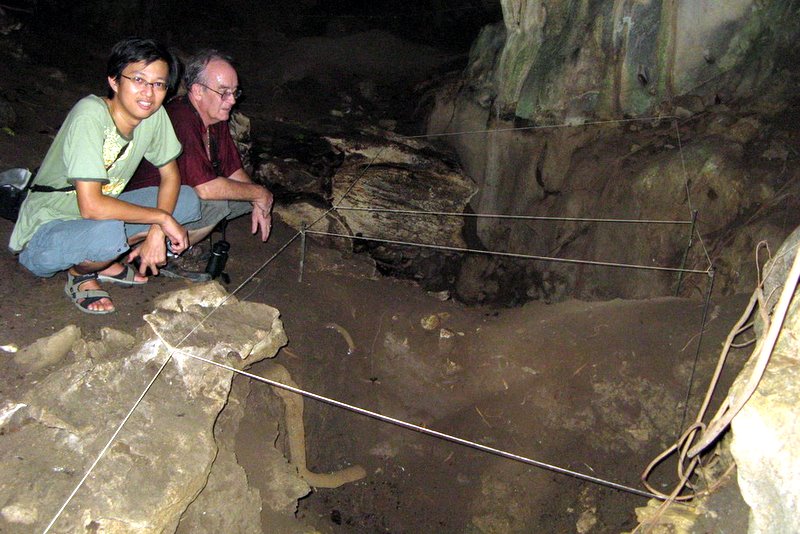 Instead we visited another cave, the Gua Tok Giring, near Lenggong. To enter the cave you need proper equipment, so we just had a look at the outside, while our guide Neal was giving information about various aspects of caves.

Walking to the cave

Near the cave entrance

Listening to the guide

Walking back to the bus

Then it was time for lunch. Lenggong is well-known  for its freshwater fish restaurants and the famous fish balls. THS had booked an eight-course lunch, organiser Sharon had warned us that there were six fish balls for each of us, three fried, three in the soup…:-) Of course we obeyed her! The food was plenty and delicious.

Not suitable for vegetarians

Our next destination was the Kekabu waterfall, between Lenggong and Kuala Kangsar. The experienced bus driver managed to manoeuvre the bus to the parking near the waterfall, from where it was an easy walk to the falls. Unfortunately the hanging bridge crossing the river had collapsed. Only a few daredevils managed to reach the other side.

One of the smaller falls

The main fall (from my archive)

After the waterfall we proceeded to Sayong, a small village near Kuala Kangsar, famous for its pottery, the Labu Sayong. Here too our driver had to prove his expertise, because the factory was located deep in the countryside. We got an interesting demonstration how to decorate the pottery, for many in the group this was the highlight of the trip.

One of the ovens

The way the guy was decorating the pot in a free style, was really remarkable.Here is a short video

Then it was time for tea, in a restaurant in Kuala Kangsar. The Ipoh Chee Cheong Fun was delicious, but the coffee….  Never in Malaysia (or even in my life…) I have had lousier coffee…:-)

The last item on the program was a visit of Kuala Kangsar, with the beautiful Ubudiah mosque and the Istana Kenangan but everybody was getting tired after a long day, so we had only a look at them from the bus….:-)

What a nice trip

We arrived back in Taiping at 6:00 pm.  A well organised trip, looking forward to the next one. Nice group of people. What especially pleased me, as a Kwai Loh, was the racial harmony, nowadays often lacking in Malaysia.