In 2009 my friends Siang Hui and Harry (†) discovered beautiful waterfalls in the Dipang river. A few months later I visited these falls myself, here is a report. During this trip I met Jinnah, a friendly Semai from Pos Dipang. He told me that that were more waterfalls upstream. Within a period of a few months, I came back three times. The last time Jinnah took my friend Rani and me to the very remote upper falls. The report can be found in Three times Dipang.

That was four years ago.Time to go back, with a group of friends. A camping weekend. We met as usual at the mamak near my condo for breakfast. From left to right Aric, Janine, Edwin, Teoh and Nick. 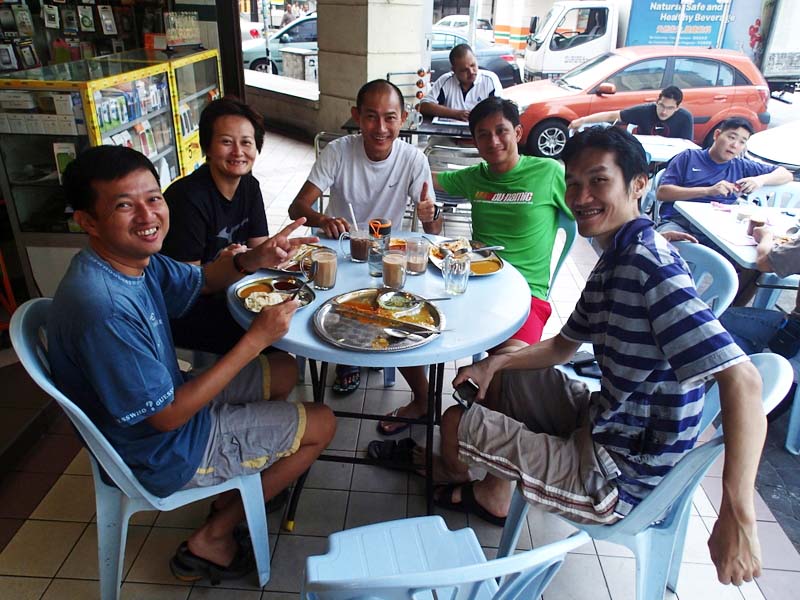 On our way to Pos Dipang we picked up Eddie at Tanjung Malim. After we arrived in the Orang Asli kampung, we asked for Jinnah, as I had not been able to contact him earlier. It was nice to meet him after four years, but at first it did not look good, because somebody had died recently in the kampung and he was not sure if he could guide us into the jungle. We went with him to the penghulu to ask permission to camp. 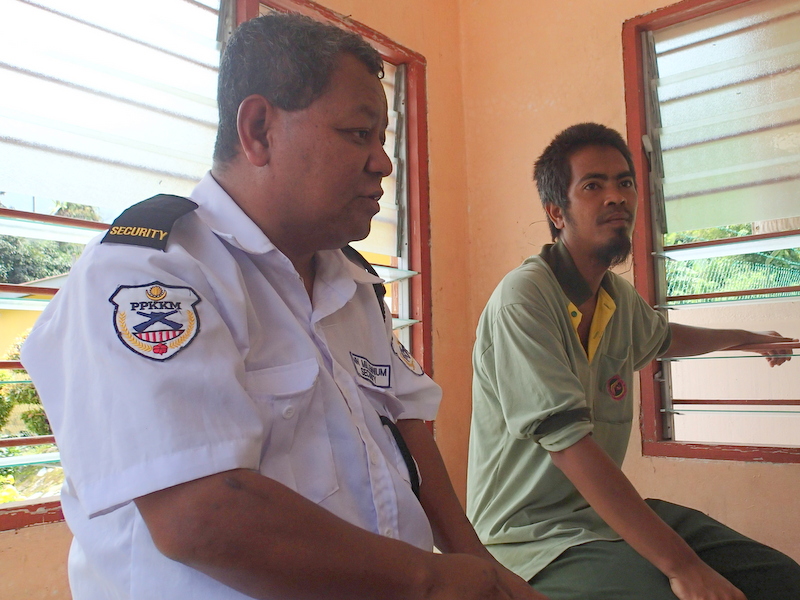 That was no problem, but the penghulu asked us to report at the police. While Edwin went to the police station, we went already to the campsite where Rani and I had camped four years ago. At first Jinnah was not happy with the location (too close to the river) and suggested a location a bit further upstream. 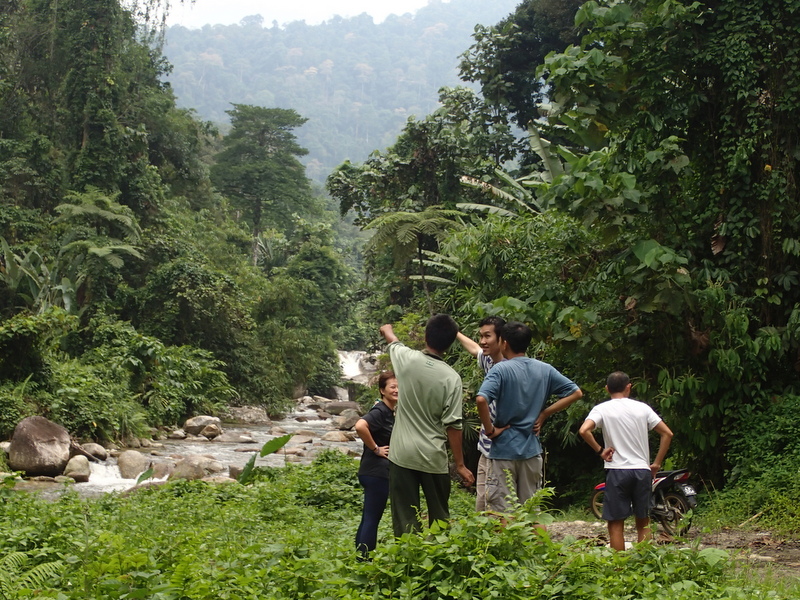 But after some discussion we decided it was better to camp at this spot. Hurriedly we put up our tents, as the sky was darkening.

Almost ready for the rain

We had to provide extra rain cover. I had none for the tent borrowed from us byTeoh and Nick. That was not a success, it turned into a swimming pool…:-(

Just use the car

We had planned to explore the nearby falls in the afternoon, but we had to take shelter in our tents. Fortunately the rain stopped around 5 pm, so we had a relaxed evening.

The plan was that everybody would take care of his own food, but on the spot we decided to have a shared meal. With a pre-dinner drink and a glass of wine. That is what I call luxury camping…:-) 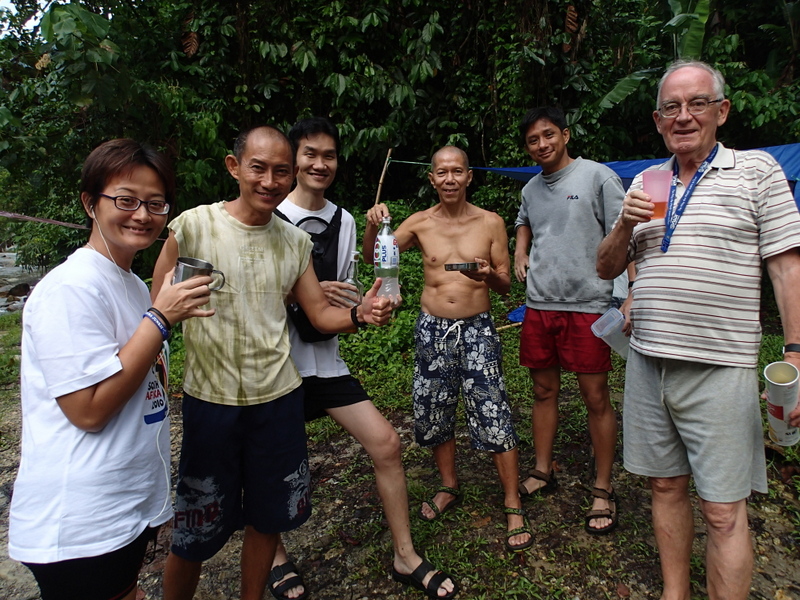 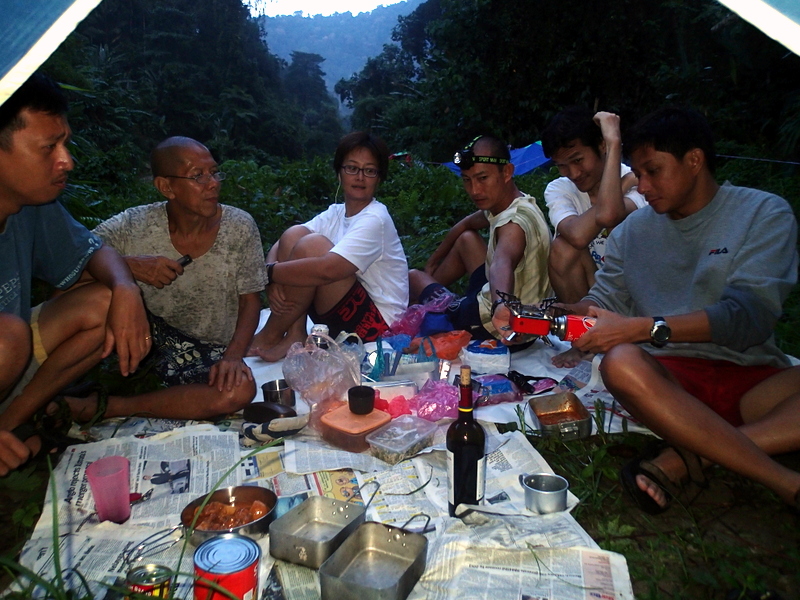 Jinnah came to tell us that he would guide us to the upper falls. That was good news, I had GPS tracks taken during my visit four years ago, but I expected the trail to be overgrown, as Jinnah told us that almost nobody ever visited these remote falls.

Here we are, the next morning, ready for a long hike…:-) 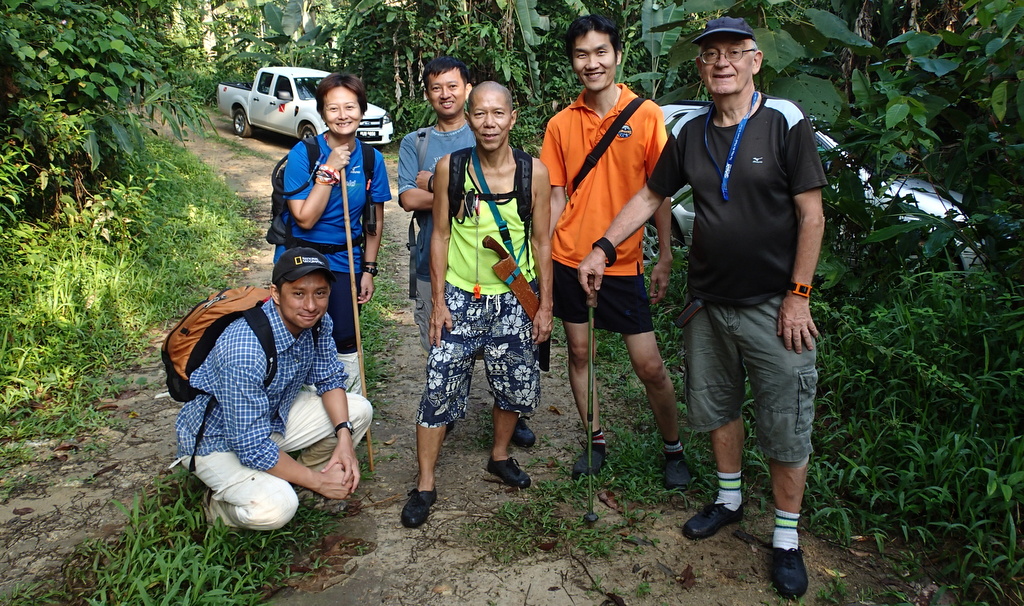 Jinnah guided us on a different route, because after my last visit a logging road had been opened. A steep climb, but very fast compared with the old route. Nice views of the surrounding jungle.

When we entered the jungle, we first followed a rather clear trail to a pettai garden. After that, our two guides had to do a lot of chopping until we reached the river. There were legions of leeches, Jinnah used tobacco as protection. River trekking is fun, but also slow.

After 2.5 hours hiking we reached the bottom of what I had called fall nr 4. The real name is Lata Cheroh. During my 2010 trip I had seen this waterfall only from the top, so this was a new fall for me. Very impressive, but my pleasure was spoiled by the large number of bees…:-( So we took only a few pictures before we continued. 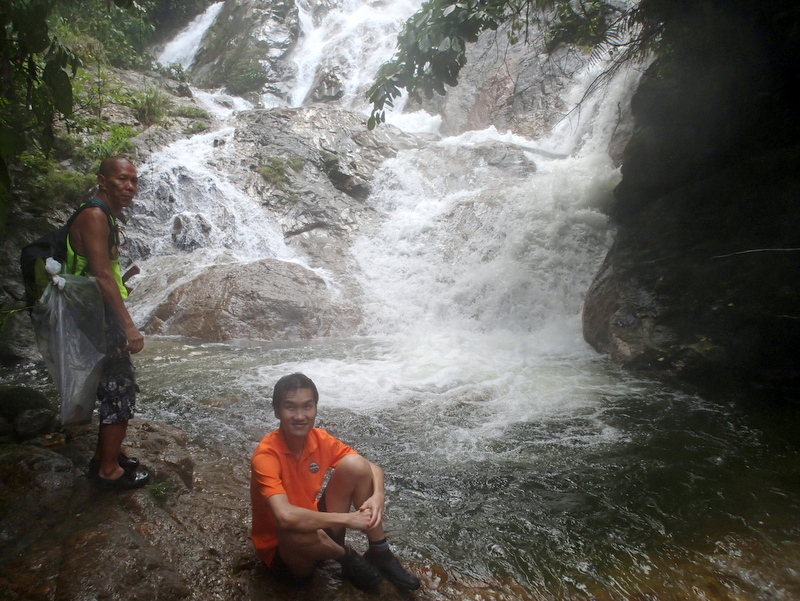 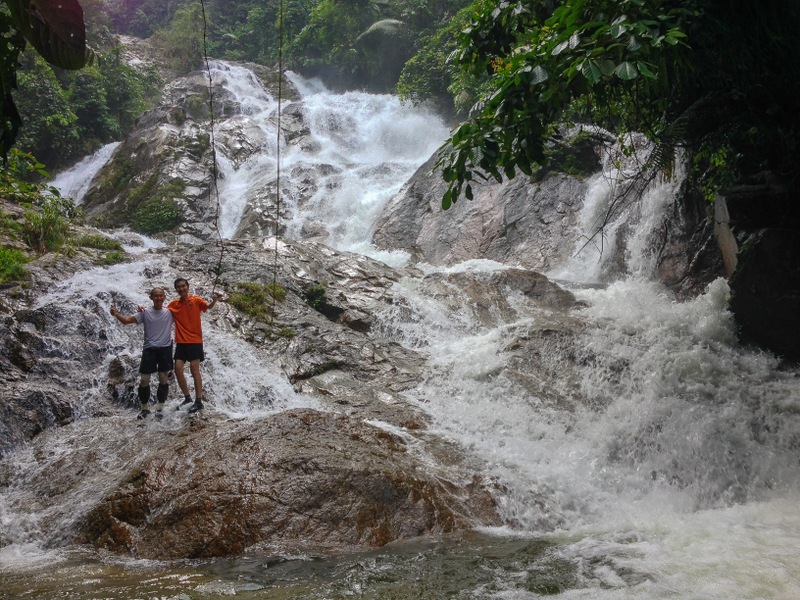 To reach our final destination, we had to scramble up a really steep slope until we arrived at the top of this waterfall. From there it was an easy, short  river trek to the bottom of Lata Merjur (fall nr 5). Because of the rainy season the water flow was spectacular. What a waterfall! 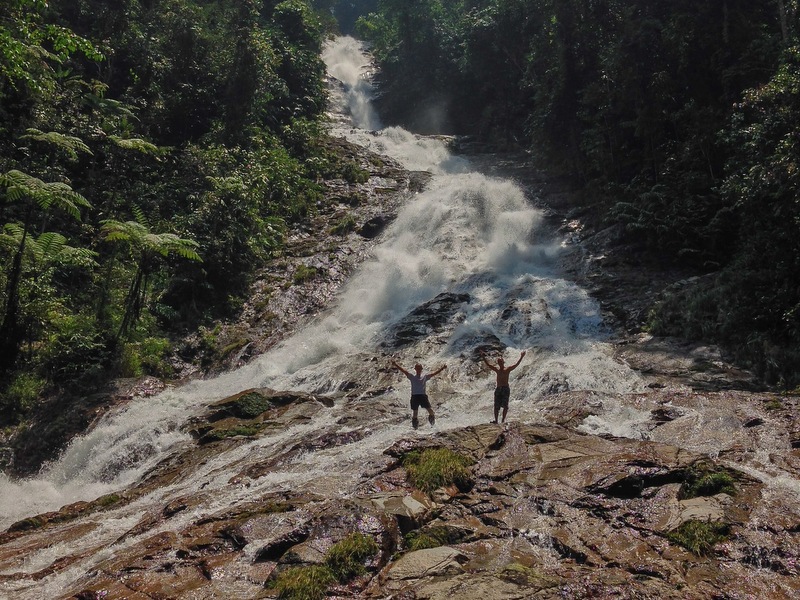 But also here there the bees were all over the place. Because it was the flowering season, Jinnah explained. Almost everybody in our group was stung one or two times. Instead of frolicking around, I kept myself mostly submerged in the water. Hardly took pictures, here are a few , taken by Aric and Janine

Aric and the fall

Here is a video of the fall.

Because of the bees we did not stay long at the fall. As the weather was still good, Jinnah decided to go back the same way, river trekking. With (heavy) rain, that would have been too risky. In that case the best way back would have been a jungle trail with a lot of chopping. Now we were back around 3 pm.

A nameless waterfall on our way back

We were very lucky with the weather, it became cloudy and a bit threatening, but no rain until we had reached our cars. Beautiful landscape

After saying goodbye to Jinnah and the penghulu, we drove back to Kampar for a very late lunch (more like an early dinner). Kampar is famous for its Roti Ayam . During our meal, there was a huge downpour, probably our tents would not have survived the strong winds…:-)

Saying goodbye to the penghulu

It was a wonderful trip, with a very pleasant group. Pity that there were so many bees. These falls are very remote, if anything happens, you really have a problem. Actually, although I had not noticed it, I must have been stung, as both my left cheek and right foot were swollen when I came out of the jungle.  Maybe it is time for me, at my age, to slow down a bit..:-)

On this GE screenshot you can see how remote the location of the waterfalls is.