For many years we have been thinking about a trip to the Land of the Rising Sun. China and Taiwan are “easy” countries for us (i.e. for Aric). Would the language be a problem in Japan? Finally we decided to give it a try, so we booked an Air Asia flight to Osaka. A 9D8N trip, two nights in Osaka, three in Kyoto and three in Wakamaya. Aric was the organiser, I just followed him…:-)

In Osaka he had booked, via Airbnb , a nice studio, near Dotonbori, the nightlife and entertainment district of Osaka. We walked around and bought snack food at several stalls.

The next morning we visited our first temple, just beside our apartment, the Namba Yasaka shrine . It is a Shinto shrine, old but rebuilt after the war. The enormous lion head-shaped hall is quite spectacular. Religion in Japan is a confusing mixture of (animist) Shinto and Buddhism. Devotees write their prayer on a small plaque, called ema, and hang it in the shrine, where the kami (spirit/god) can read it.

After this quiet start, a hectic morning followed, as we had to solve two problems. First we had to find an ATM machine that accepted my (Dutch) bank card. Surprisingly many ATM do not have  the “Maestro” option. Fortunately we had exchanged already some money in KL. We also needed a data plan, because we use Internet a lot while exploring a town, especially Google Maps. At the airport we could not get it. Using WiFi in our studio Aric had found a Citibank and a big telecom shop near the Umeda Sky Building, so we decided to go there, using the subway. The Osaka subway is not for the faint-hearted, but we managed..:-) . The Citibank accepted my ATM card, later we discovered that most 7-Eleven stores also have ATM machines which accept Maestro. We also found the telecom shop where Aric bought a data plan. But we could activate it only in our studio, so that first day, we did not have our Google Map.

Our next destination was the Castle of Osaka, the main, and according to many the only tourist attraction of Osaka…:-). The origins of the castle date back to the 17th century, but also here it was severely damaged in the war and later reconstructed. Located in a park, surrounded by a moat. Quite impressive. Lots of tourists. 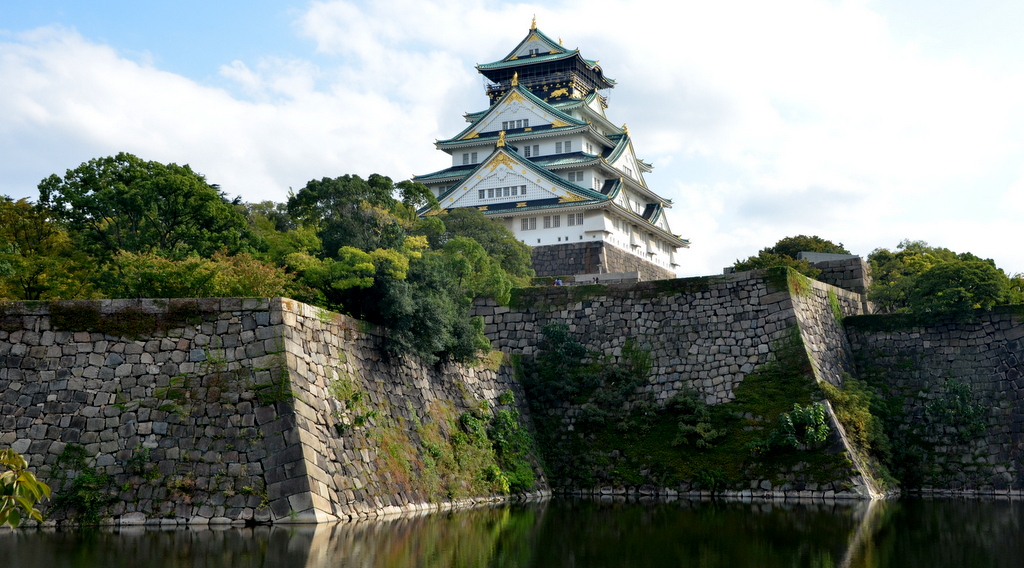 King of the Castle

For lunch Aric had chosen a local restaurant where they served BBQ-ed Kobe Beef. He had the coordinates, but we had no Google map. What do to? We walked a lot, partly underground from one subway station to another, we crossed shopping streets. We even asked policemen. Finally we found it. But it was closed…haha

Instead of Kobe beef we had some snacks and then went to the Harukas 300 building, the tallest skyscraper of Japan, 300 meter high. From the observatory floor we had an impressive view of Osaka. We spent some time there because we wanted to see the sunset (which is early, around 5:30 pm).

Good there is glass

Before looking for dinner we first visited the nearby shopping center, where Aric bought a samurai sword! The customs in KL was at first a bit suspicious about it, but this was a ceremonial sword, not sharp, so it was not confiscated…:-). Walking back through the market, we finally found a BBQ restaurant, where we had Kobe beef. Expensive but delicious, almost melting on your tongue.

It was a long day, with many new impressions. The town architecture is not attractive, gray and boring.  Streets are clean, we did not see any graffiti. The Japanese people are friendly, but communication is difficult. And they are very disciplined, when the pedestrian lights are red, nobody will cross. The school children are wearing identical uniforms, quite cute.

We stayed two nights in Osaka and that was enough.