When you have followed my blog posts, you will know that I am a supporter of the Rare Earth Hypothesis. Mind you, I will be more than happy if  proof of extraterrestrial life is found, but for the time being, I think we may well be alone in the Universe..:-(

Actually, for many years already I am participating in the SETI@home project. SETI stands for Search for ExtraTerrestrial Intelligence. The purpose of the project is to analyse radio signals for signs of intelligent life in the universe, and it is doing this by what is called distributed computing. The data to be analysed come from the Arecibo radio telescope in Puerto Rico.

More than 120.000 PC’s all over the world take part, my PC is one of them. When my computer is idle, it starts analysing a data packet received from Arecibo. Results of the analysis are sent back to SETI, I receive a new data packet and so on…:-)  Here is the Arecibo telescope (with its mirror diameter of 300 m the largest in the world) and a screenshot of my monitor while it is analysing the data. Visual output is a screen saver, moving around the screen all the time.. 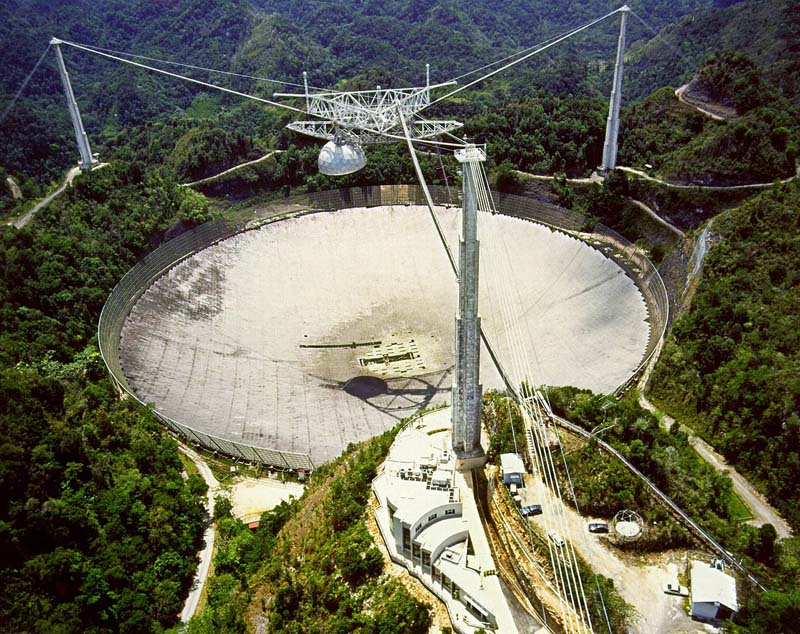 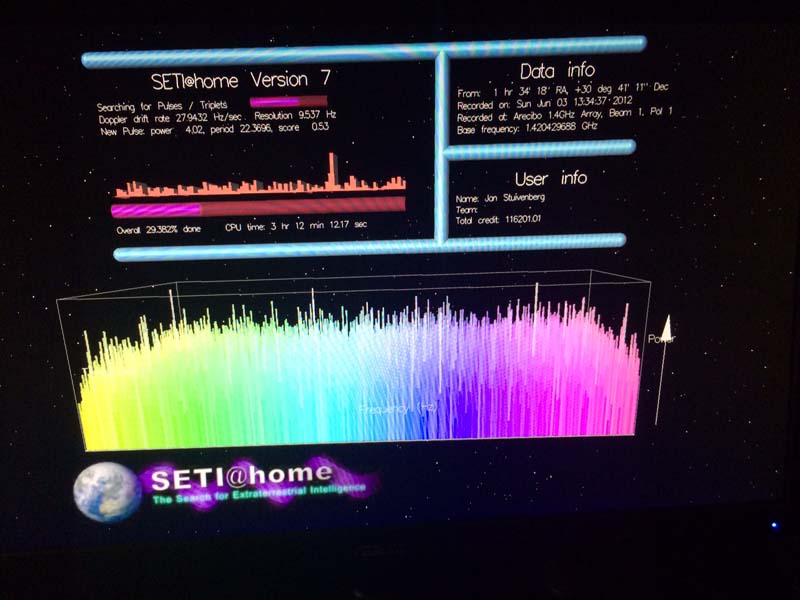 The project has started in 1999 but until now no sign of (intelligent) life has been found.

You might describe this activity as LISTENING : is there anybody in the universe trying to communicate with us?

What about SHOUTING : is anybody out there? That is the topic of this post. Making our (human) existence known to the universe.

The first attempt to send out a signal to the universe dates back to 1972. The Pioneer 10 space probe was going to explore Jupiter and would leave the solar system after the end of its mission. Carl Sagan , who had been active already in promoting SETI, suggested  that a “plaque” should be attached to the space probe, with information about our human species. The left image gives an artist impression of the Pioneer 10, now traveling in outer space, far away from Earth. It might come close to Aldebaran, a red giant star, in about 2 million years..:-) The right image shows the Pioneer plaque, designed by Sagan and his wife. 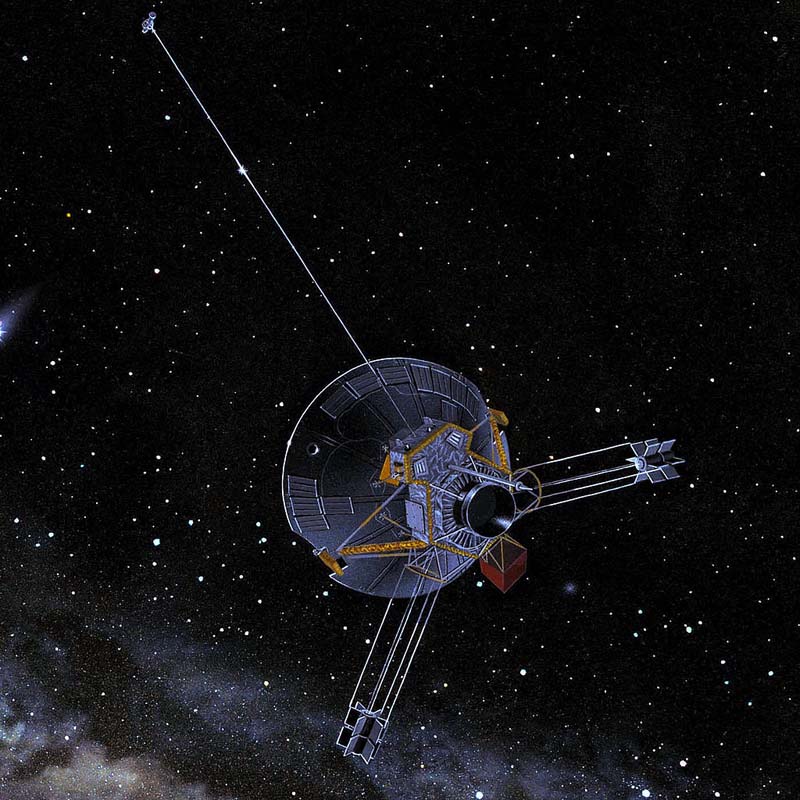 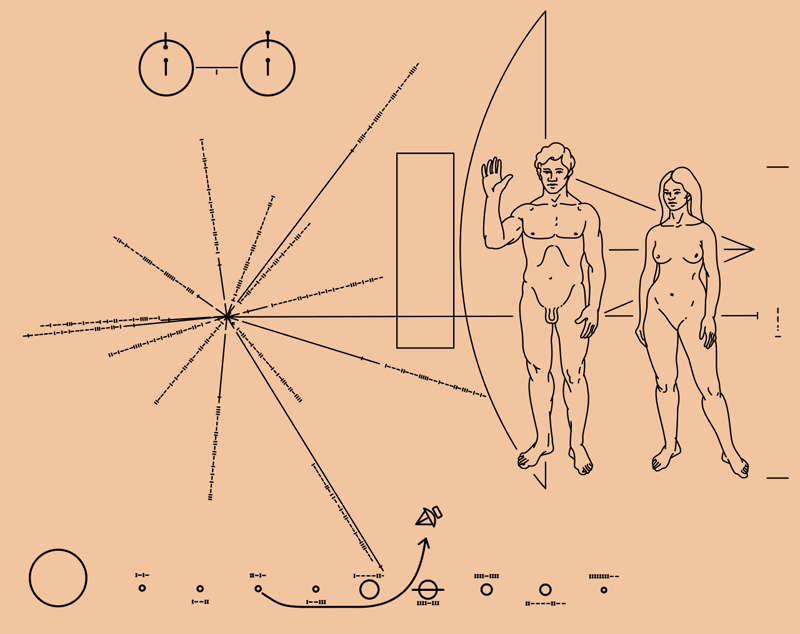 Five years later the two Voyager space probes 1 and 2 were launched, again to explore the outer solar system. They have been extremely successful and are still operational, after almost 40 years! The Voyager 1 is now 19.6 billion km away from Earth, you can check the actual distance here . It has on board a phonographic(!) record containing information about Earth and about us. A kind of time capsule! The left image shows an artist impression of the Voyager 1 with the location of the golden record clearly visible. The right image shows the cover of the Voyager Golden Record. 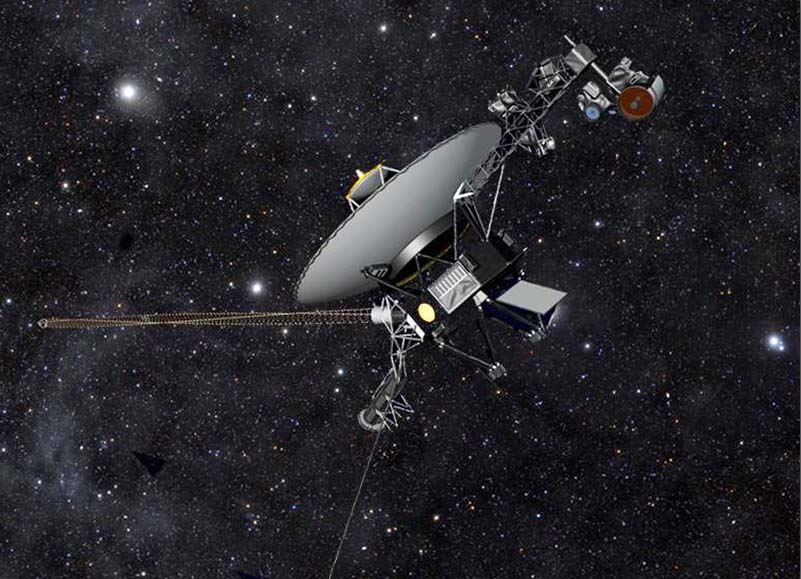 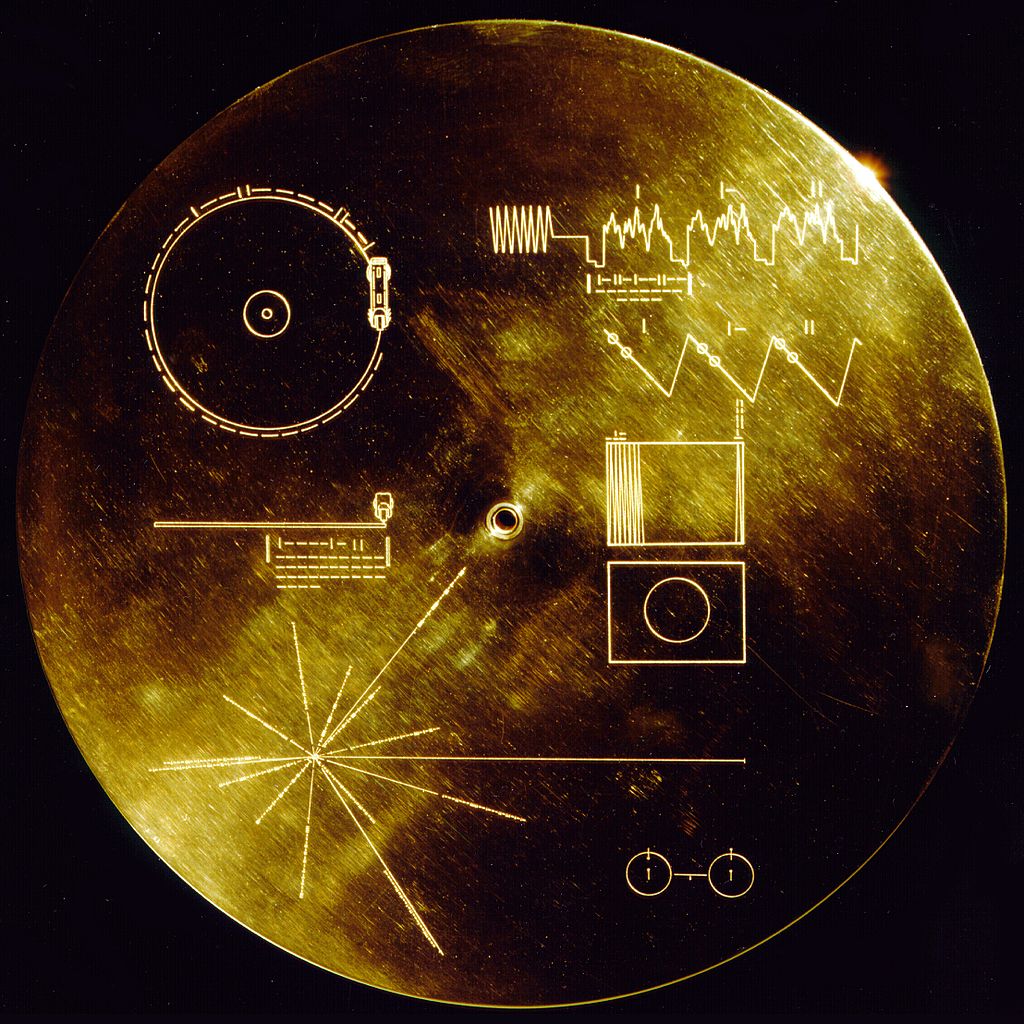 Mind you, in 1977 digital coding was not common, no jpeg or mp3 existed yet, it was all analog!. Here is a fascinating Table of Contents of the Golden Record. Please click on this link and be surprised. A welcome message by Jimmy Carter, at that time US president! Greetings in 55 languages. One of them in Dutch (yes!), another one in Indonesian, four Chinese dialects, but no Malay, nor Tamil..:-(  Music, from classical until modern. But this time no picture of naked humans, thanks to a (still) prudish US..:-).

If ever an alien civilization would pick up this time capsule, would they be able to decipher it? Some sources doubt it,  check this funny Gizmodo report

You might compare these first attempts with throwing a bottle in the ocean. Maybe somebody will ever find it. Can we get more active?

Yes, we can. In 1974 the Arecibo telescope, mentioned above, sent out the Arecibo message to the Universe. A sequence of 1679 zero’s and one’s. Why that number? Because it is a semi-prime, product of two large prime numbers 23 and 73. When you order the message, split in a matrix of 73 x 23, you will get this (in black and white!):

To “explain” this, the white part represents our decimal system, the green one the  nucleotides  in our DNA, the blue one the double helix. The red human has next to it the human size (in binary) and the human population (also in binary), but probably you understood that already, didn’t you…LOL? Yellow represents our solar system, the third planet is shifted to the left with the human standing on it. Easy, right?

But would you be able to reconstruct the content from this binary sequence?

These communication attempts date back quite a long time. Here is a recent one. On 9 October 2008 a high-powered digital radio signal was sent towards the Gliese 581c extrasolar planet: called A message from Earth. Followers of my blog may remember Gliese 581 as the name of a star with more than one habitable planets in orbit. Here is the blog report: New extrasolar planet has been discovered

The distance is about 20 light year, the message will reach the star in early 2029. If “they” reply immediately , we may expect a reply around 2050…:-) Here is the Ukrainian (!) telescope used to send out the message, and a sketch of the Gliese 581 planetary system. 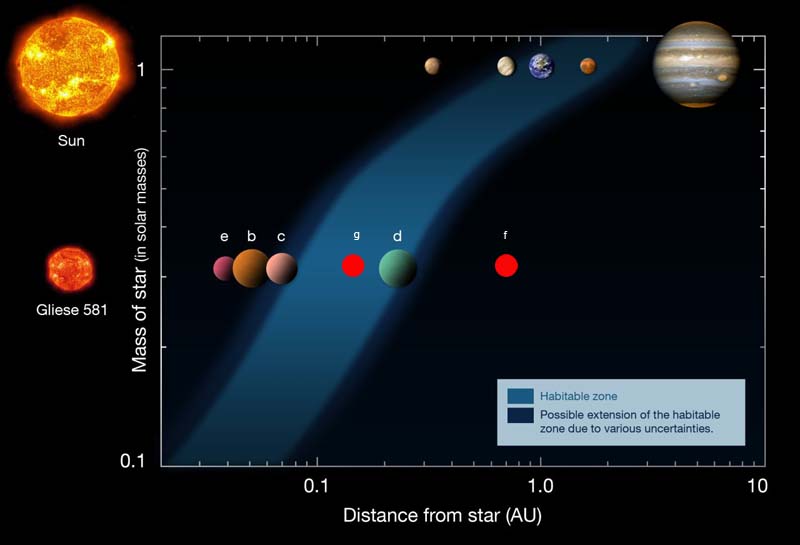 Is it wise for us to make our presence known to the Universe?

Stephen Hawking is not so sure about it and he is not the only one. Contact with aliens  could be risky. “If aliens visit us, the outcome would be much as when Columbus landed in America, which didn’t turn out well for the Native Americans ,” he said. “We only have to look at ourselves to see how intelligent life might develop into something we wouldn’t want to meet.”

A contact with aliens might be very different from Spielberg’s Close Encounters of the Third Kind, my favourite science fiction movie, released in 1977.

4 thoughts on “Anybody out there?”