Six years ago, in 2009, I finally discovered the Lawing waterfall in the Ulu Langat region. I knew that there should be a waterfall on the way to Gunung Hitam and I had tried a few times to find it. Here is a Google Earth map with some of those attempts and the final success. 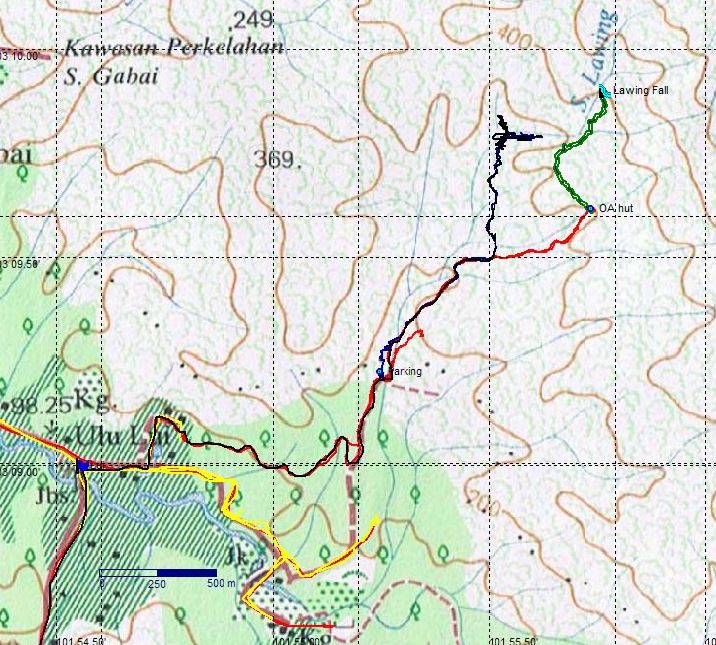 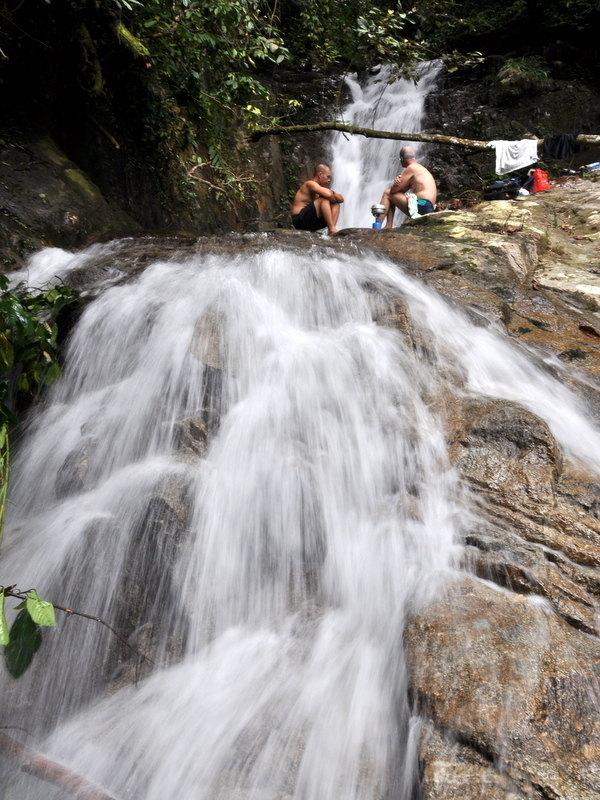 Soon the waterfall was published on my Waterfalls of Malaysia website, Lawing Falls , with the description “Unknown, pristine waterfall in the backyard of KL”

When you visit the webpage, you will notice that there are several comments that the falls could not be found. Was there something wrong with the directions given, for example “turn left at a remote orang asli hut“?

Therefore I decided to revisit the falls with a group of friends. We met for breakfast at Suntex, then drove to Kg Lui, following the directions of the webpage until we reached the end of the road. It was durian season and we had to be careful where to park the car because there were durian trees all over the place. Crossing the bridge we followed a clear trail until we reached the orang asli hut.

A whole family was staying there, very friendly. We asked the old man how to go to the waterfall. Just turn left for the waterfall, he said. And also without him we would have found the (vague) trail. BECAUSE…. the house was in the center of a durian orchard and the undergrowth had been cleared, so people could find the fallen durians easily. That explained a lot. When you come outside the durian season, the hut is empty and the undergrowth has grown back, making the trail almost invisible.

It is only a small part of the trail (until you enter the jungle again), that “disappears” outside the durian season. I will update the description on the website. Once you have entered the jungle, the trail is clear and leads you to the waterfalls.

Two tiers in one picture

Could there be another fall?

We had a pleasant time at the falls, enjoying the pristine environment and our lunch. Two of us were interested to find out if there was another fall upstream. They found one, but the access was difficult, huge boulders and slippery rocks.

With a big pool

On our way back to the car, we spotted several durians that had just fallen down. We could not resist the temptation to take a few, opening one on the spot to find out that the taste was delicious! We also passed a tree with a makeshift ladder leading to the top. Could it be to collect honey? Many beautiful beehive gingers (Zingiber spectabile)

We still felt a bit hungry so we went to a Thai seafood restaurant in Hulu Langat. We asked permission to prepare the rest of our durians and have them with our meal. As you can see, Aric loves durians but not with a meal…:-) The others enjoyed durian with rice.

Durians with a meal? Hmm

A fun trip with nice company!