When I moved to Amsterdam in 1961, as a 17 year old freshman, I had lodgings near to the Vondelpark. Later, after I became a teacher, I have been living again close to this park, which can be considered the “Central Park” of Amsterdam..:-) Time for a homage. 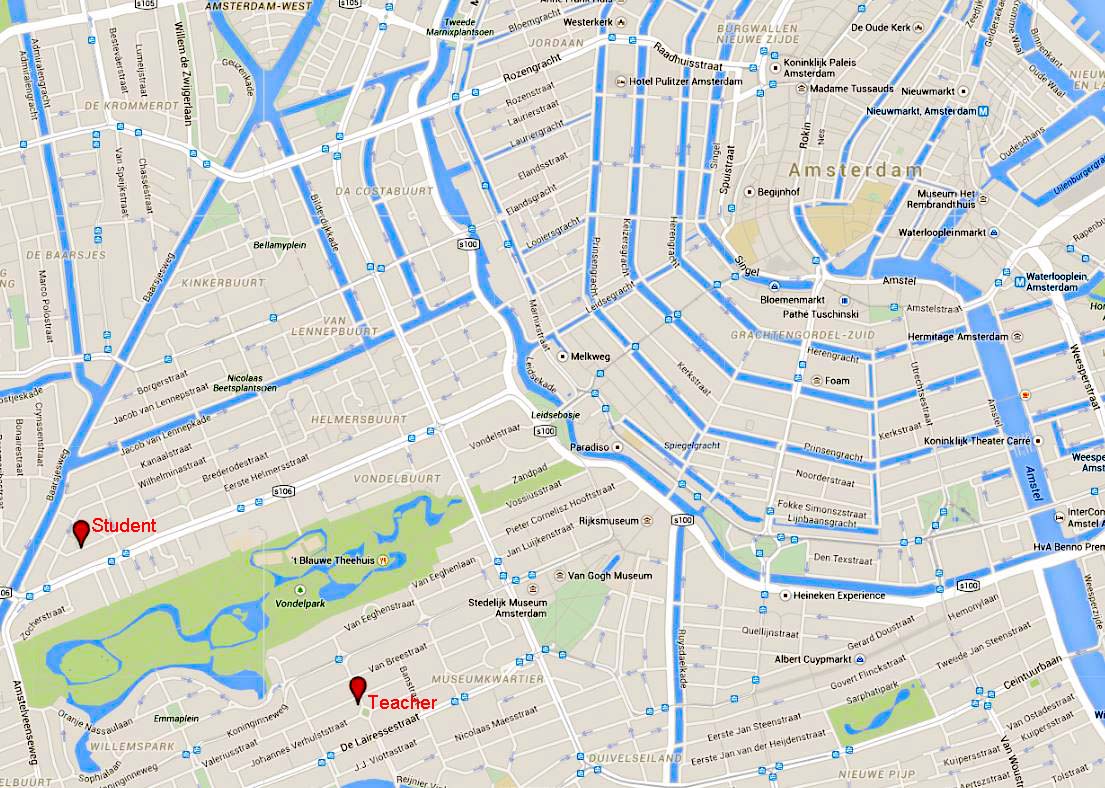 The Vondelpark was built in four phases between 1864 and 1878. Below is the situation around 1882. Notice that Amsterdam was still a small town, mainly contained within the “Singelgracht”. Where I would live ~100 years later, was still farmland. Note that the map has been rotated slightly and that the park (lower right) has a separate detailed map at the left 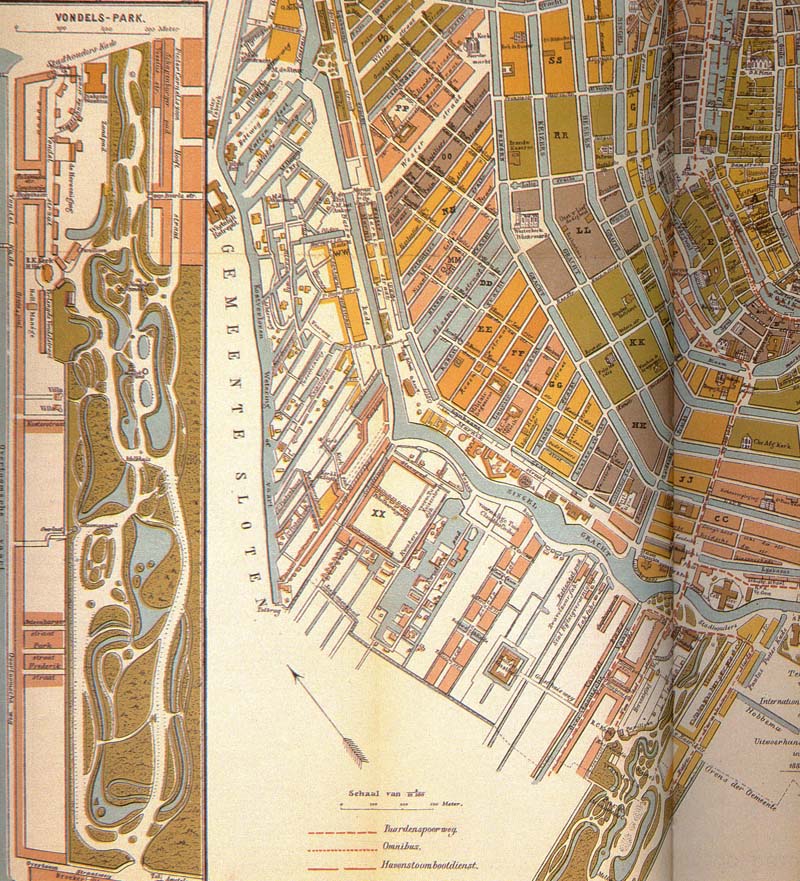 Being back in Amsterdam at the moment, I decided to visit the Vondelpark and take lots of pictures. It was beautiful spring weather. I started at the western entrance. Here I am looking back to this entrance. You can see clearly that the park is below the street level

There are a few cafes in the park and on a sunny day many people will come here to enjoy a drink. Others will just relax in the grass, or even take a sunbath..:-). The sycamore avenue (Platanenlaan) was originally designed as a race course. For horse riding, in the beginning bicycles were not allowed in the park. Now it is the other way around..:-)

The Vondeltuin, an open-air cafe

One of the side entrances

People walking their dog, joggers, roller skaters, bicyclists, sunbathers. Or just resting in the grass, enjoying another type of grass…LOL. At some places the smell of marijuana is so strong, that you almost can get high, just walking around.

Gradually I walked/biked eastwards in the park. On the south side of the park, a affluent neighborhood developed, so the park entrances from that side became more posh and elaborate..:-)  The rose garden was a later addition (1936). By the way, this rose garden is one of the most popular (and dangerous!) gay cruising areas of Amsterdam…:-)

A good place to read a book

There is a stork nest in the park

Another side entrance, south side

The rose garden, too early for roses

There are three more cafe’s in the park. In the Groot Melkhuis opened in 1874, you could drink fresh milk. Now it is a popular self-service cafe-restaurant with a playground for the kids.Here you can read what Tripadvisor says about it.

The Blauwe Theehuis is another popular venue. It was built in Modernist style in 1937, after an earlier tea house had been destroyed by fire. The Vondelpark Pavillion is a beautiful building, designed in Italian Renaissance style and built in 1878. Along the north side of the park, the Vondelstraat houses beautiful villas for the happy few..:-). Two churches can also be found here. The Vondelkerk was designed in neogothic style by famous architect Cuypers (Rijksmuseum, Central Station)

Originally the park was named the “Nieuwe Park” but later renamed Vondelpark after Holland’s most famous poet Joost van den Vondel. A statue of the poet was placed in the park in 1867. The bandstand was built in 1873. Several more sculptures can be found in the park and about each of them a story could be told. I will mention only the Mama Baranka sculpture, which was placed here in memory of Kerwin Duinmeyer, a 15 year old Antillean boy, who was killed by skinheads in 1983 because of his skin color.

It was difficult to stop taking pictures on this sunny day in spring…:-) Nice cherry blossom, Egyptian geese with their chicks, a hot dog vendor, and everywhere people relaxing.

In the eastern section of the park, it is crossed by a bridge, the Vondelbrug. After the park was created, north and south of the park new neighborhoods came into being. Divided by the Vondelpark! Here is the situation in 1905. 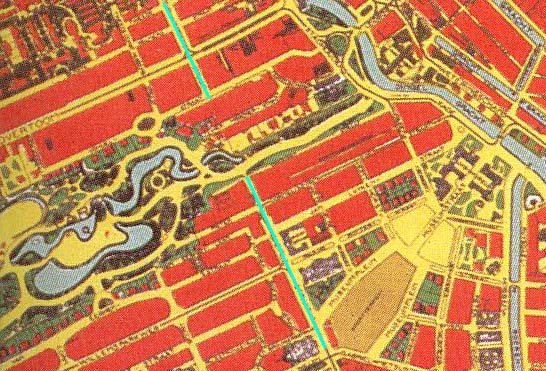 City planners wanted of course a connection road “through” the park, connecting the two streets, indicated with a blue line. But for many years the association managing the park, resisted and it was only in 1947 that the connecting bridge was opened.

Park view from the bridge

Passing under the bridge we reach the eastern end of the park, with the main entrance, near the Leidseplein. 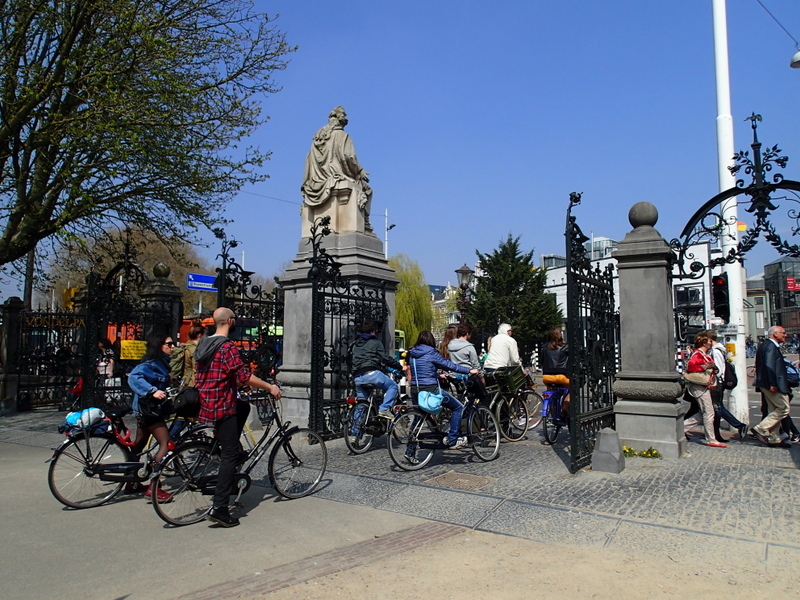 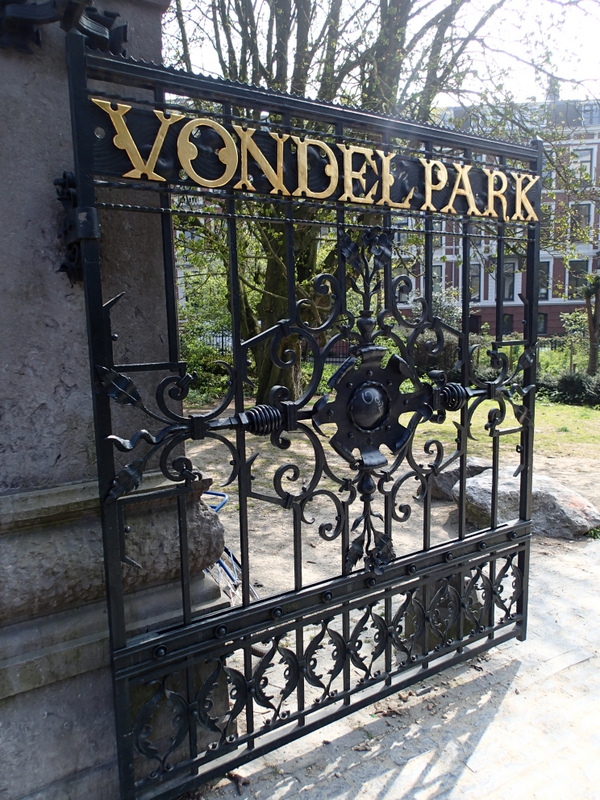 Much more can be told about the Vondelpark. Here is an interesting video (13 minutes, in Dutch) about the history of Amsterdam’s most famous park