My friend Siang Hui is very good in discovering “new” waterfalls, using the Google Earth imagery. This time he had found a promising one in Kelantan. We decided to make it a weekend trip, as Kelantan is far from KL. Siang Hui had booked a homestay in Dabong, the plan was to visit the waterfall on Saturday. Earlier that week I had caught a bad cough and a cold, thought about not joining, but finally decided to go, as Siang Hui estimated the hike to be relatively easy. Siang Hui, Rani, Nic and Teoh could start only Friday afternoon, Aric and I left earlier.

Encik Din, the owner of the homestay had warned that the direct route from Gua Musang to Dabong might be blocked. The bridge across the Nenggiri river had been destroyed during the catastrophic January floods, and the temporary bridge might be closed because of heavy rain a few days earlier. We decided to try our luck and found that he was right…:-) The temporary bridge looked passable, but apparently the authorities did not want to take risks. We had to go back to Gua Musang and make a long detour to reach Dabong. Of course we warned our friends…:-)

The road was blocked

Our gang with Mr Din

The homestay was a pleasant surprise, well-kept, three bedrooms each with aircon, TV, fridge. Hard to imagine that during the flooding, the water had risen until above the doorposts!

Unfortunately I did not sleep well that night so I decided not to join the waterfall trip..:-( Aric kept me company, and after breakfast we decided to visit an easy waterfall nearby. Lata Kertas.  The website suggests that it is well-maintained, but that is not true. Here are a few pictures and a video. Quite a nice fall actually, could be a nice tourist attraction when maintained properly

When our friends came back, at 5 pm!, the first thing Nic said, was : “Good that you did not join”. It had been a tough 7-hour hike to reach the waterfall, and even Siang Hui was exhausted. I will leave it to them to report about the “Twin Falls” as they have named the falls. That evening we celebrated the birthdays of Teoh and Rani. They look quite recovered already..:-) 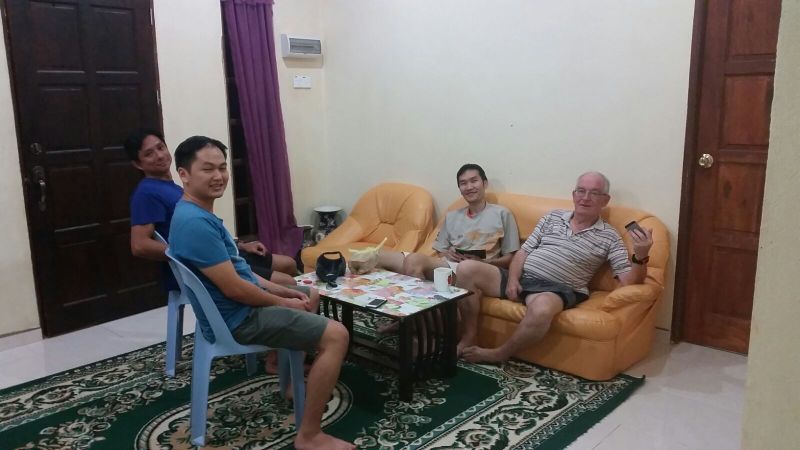 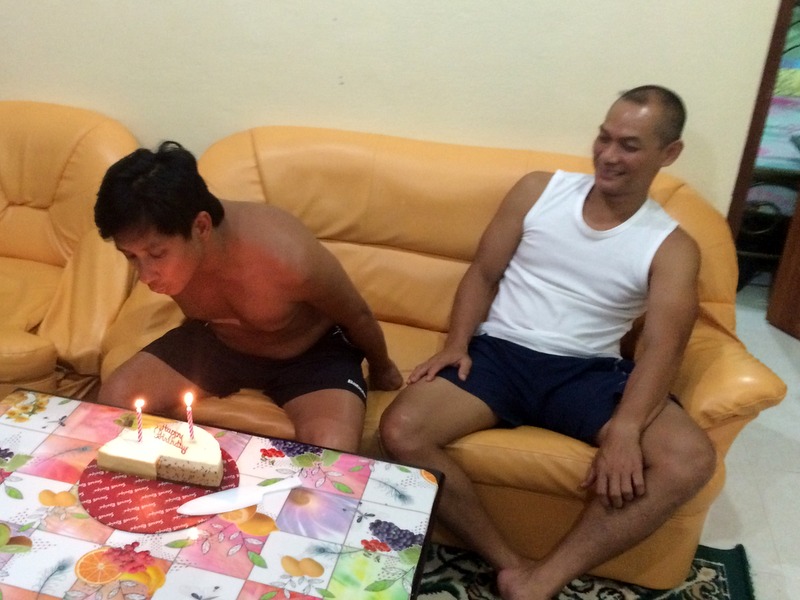 The next morning I felt a bit better and we decided to visit the nearby Jelawang waterfall, also known as Stong waterfall. It is on my website, but I had never been there myself, although I had seen the fall several times from the road. Most people climb up to Baha camp, at the top of the fall, crossing the suspension bridge to the right side of the fall. We stayed on the left side and walked carefully over the rocks to the base of the fall. Very impressive, supposedly the tallest waterfall of Peninsular Malaysia. Click on the pics to enlarge them, and try to find the tiny humans.

Stong falll from far away

One of the lower falls

At the base of the fall

Here is as video of the Jelawang waterfall

Siang Hui, Rani, Nic and Teoh had to drive back to KL after this visit, another long drive. Aric and I were not in a hurry and decided to make it a round-trip, first going north  to Jeli, then following the East-West highway to Gerik, stay overnight in Kuala Kangsar, from there the next day back home. It gave us the opportunity to visit one more “easy” waterfall, Lata Janggut. Not spectacular but worth a visit. Will soon add it to the Waterfalls of Malaysia website.

On our way to Gerik we saw a signboard Air Panas (Hot Spring). We love hot springs, so we had a look. What a surprise, a futuristic design in bright colors, still under construction. The water was too hot, not suitable for bathing, as a poor frog had found out. I doubt if it will become a tourist attraction. In Kuala Kangsar we stayed in a boutique hotel, the Shop Hotel. Nice design, but rooms really too small, I almost got claustrophobia..:-)

Too hot for this frog

The Shop hotel in Kuala Kangsar

The next morning we visited a few of the Kuala Kangsar landmarks. The Istana Kenangan itself was still closed for renovation, but at least we could enter the garden. The Ubudiah mosque (designed by a British architect!) was beautiful as always. The Baitul Anor, now a ruin, was built in the same period for the Perak royalty. We visited the Royal gallery, full of memorabilia of the former sultan.

Then it was time for lunch. Laksa, a Kuala Kangsar specialty and one of Aric’s favourite foods.For me one laksa was enough, Aric had three. The first was Laksa Pak Ngah, a famous one. Modernised, and a bit disappointing. The second one was Laksa Pokok Limau, where my friend Ibrahim had taken me during the Sg Siput Recce. Before going there, we had a look at the Victoria Bridge, visited by Chadel and me when we followed the  route of the Japanese invasion in 1941-42. Finally we went to a Chinese laksa shop in the town (the other two were Malay). Aric’s verdict: the laksa in Laksa Pokok Limau was the best, although a bit too creamy.

Ok, but not special

The bridge and me

Although I did not visit the new waterfall, it was a nice rewarding trip.