Surfing the Internet, I recently came across the FB page of Encik Anuar Isa, the curator of the (now closed) First Galleria . I was intrigued by this entry, published in 2014: 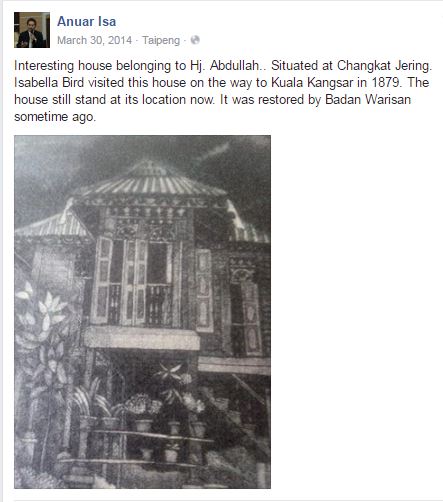 Intrigued but also puzzled. The Hj Abdullah mentioned by Anuar Isa is Abdullah Muhammad Shah II , the 26th sultan of Perak. In 1875, he was accused of being involved in the murder of British Resident JWW Birch and exiled to the Seychelles in 1876. Could this be his house?

I published the picture on the THS whatsapp, asking if anybody had more info about this house. A few weeks later another THS member, Amril, also interested in the history of Taiping, replied that he had found the house and more information about it. The house was built in 1926 by a famous bomoh. Interesting but not related to Hj Abdullah and Isabella Bird never visited it.

A good reason for me to visit Taiping again and visit this house..:-)  I decided for a 3D2N trip and, as Aric was busy, asked my friends Paul and Fahmi to accompany me. Here is the report, actually about a lot more than Taiping..:-)

We left KL Friday morning and only had to be in Taiping in the afternoon, as we were invited by Amril to attend the Open House of his father, the OBJ of Larut, Matang and Selama. We decided to visit Kellie’s castle, as Fahmi had never been there.

For a history of the castle, click here. It has been renovated and embellished in recent years, making it a popular tourist attraction, although it has made the atmosphere less romantic. But still worth a visit. 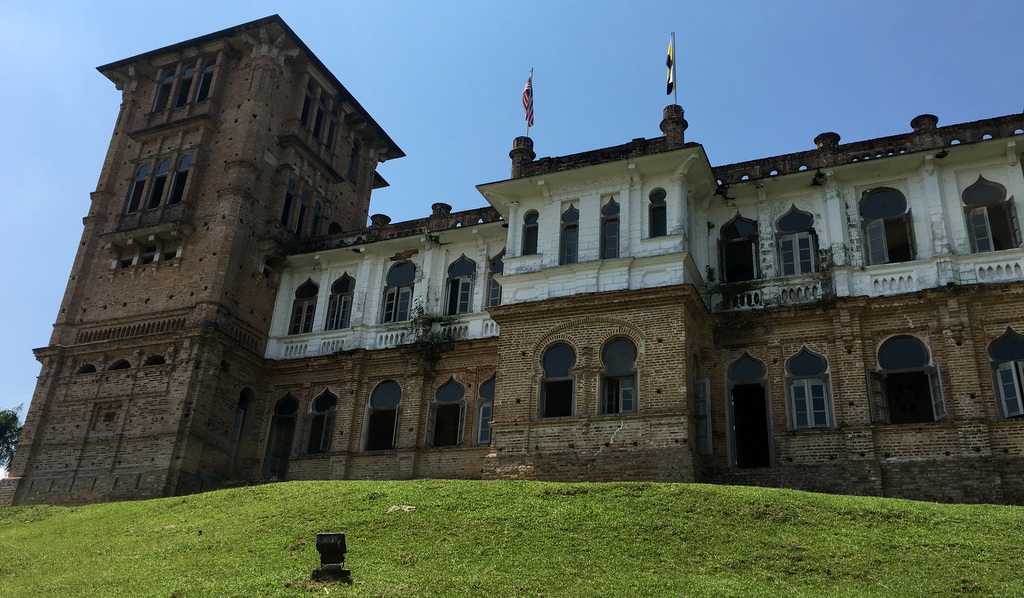 Posing with the castle

One room is nicely furnished

View of the original Kellie house

Our next destination was the Ulu Lecin waterfalls near Beruas, but when we arrived there, it started raining, so we decided to skip this and continue to Taiping where I had booked rooms in hotel Furama. Close to the Lake Gardens and within walking distance of the town center.

After a short rest and a change of clothes, we drove to the residence of the OBJ. The open house was held between 3 and 6 pm, I was expecting Malaysian timing, i.e. that it would start later. Mistake, when we arrived around 4:30, most of the food was finished already and many guests were leaving…:-)  No problem, there was still enough food and friendly company…:-) Amril was there to introduce me to his parents and I met  Abdur-Razzaq Lubis and his wife Salma, authors of many books about the history of Perak.

From right to left the OBJ, Amril, Lubis and me

The Residence of the OBJ  was built in 1893 for the wife of Ngah Ibrahim. Before that time she had been living many years in what is now Kota Ngah Ibrahim in Matang. Of course both the Kota and this house have been enlarged and renovated many times. Interesting to note that the present OBJ is actually a descendant of Ngah Ibrahim.

The exterior of the residence and the main hall on the first floor. 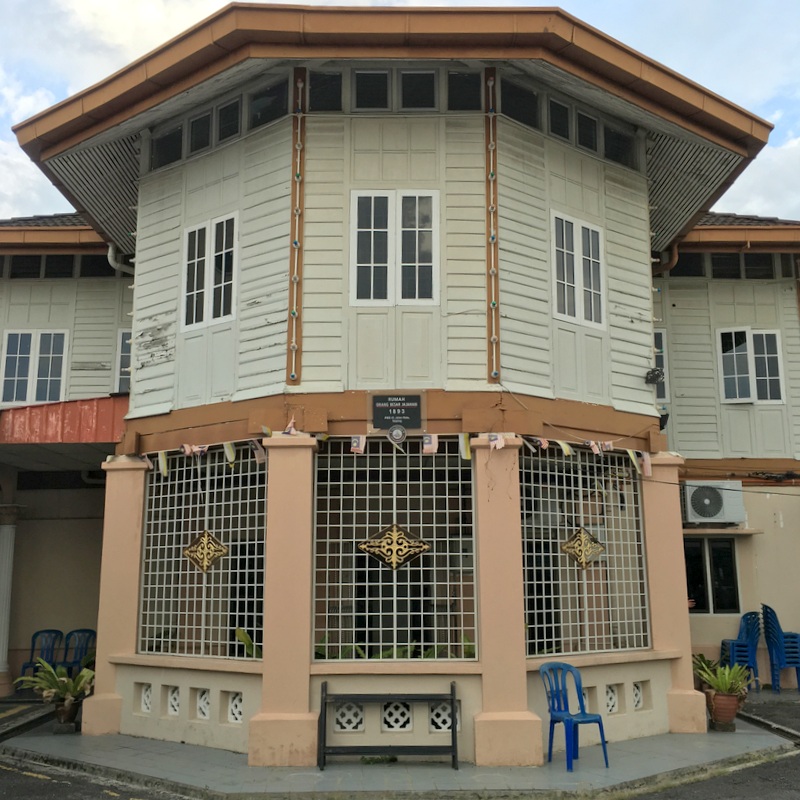 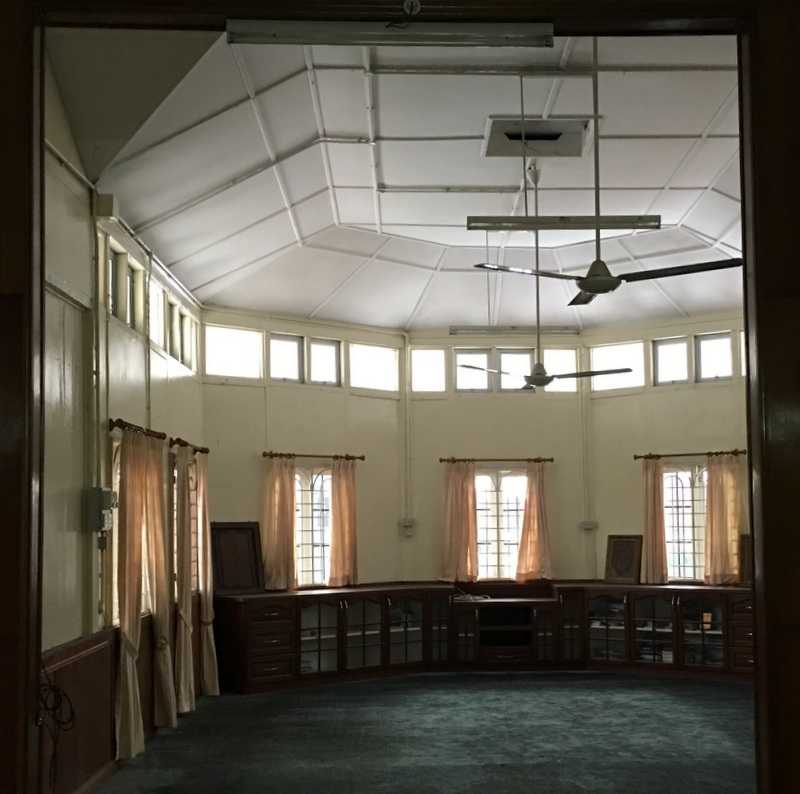 After the open house we went back to our hotel and walked to the Lake gardens. It often rains in the afternoon in Taiping, but this day it was very beautiful weather. Shall we make a boat-ride on the lake?  , I suggested. I have visited the Lake gardens numerous times, but never rented a paddle boat! It was fun, but more tiring than expected…:-)

A visit of Taiping is not complete without enjoying the food. Often it is Chinese food I have there, but this time it was it was mostly Indian/Malay/Mamak fare.

Laksa at the Old Railway Station

Breakfast in the Old Railway station

The next day I had arranged with Amril to meet him in the afternoon to visit the bomoh house. Our plan for the rest of the day was to visit the region around Batu Kurau, north of Taiping. Main target: the Air Hitam waterfall

We parked our car at the gate of the water catchment area.  When we were preparing for the hike, a friendly local passed us with the durians he had just harvested. He offered us one for free, and we could pick more, if we saw them on the ground. 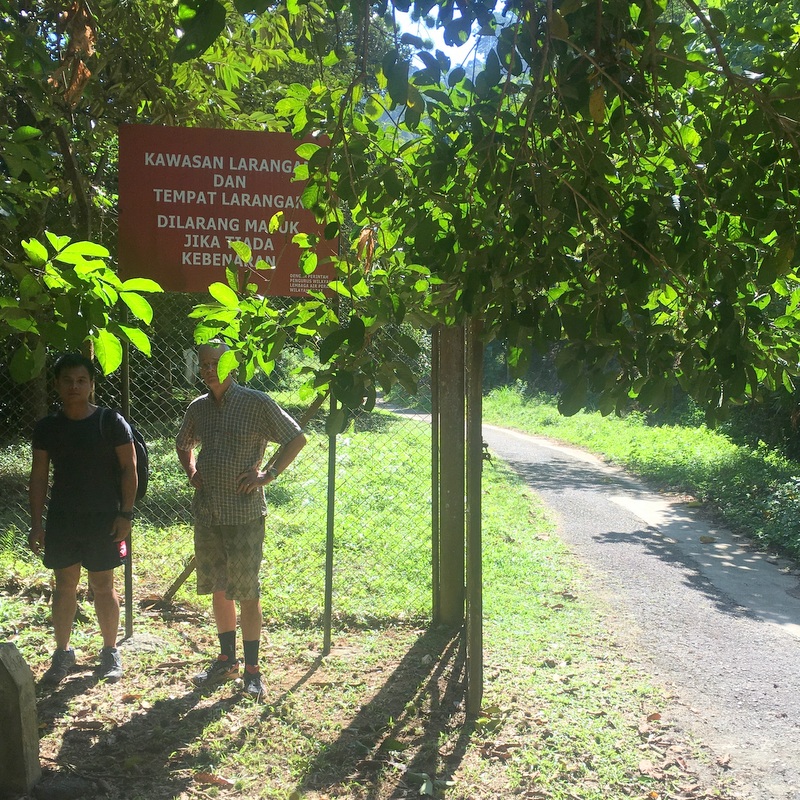 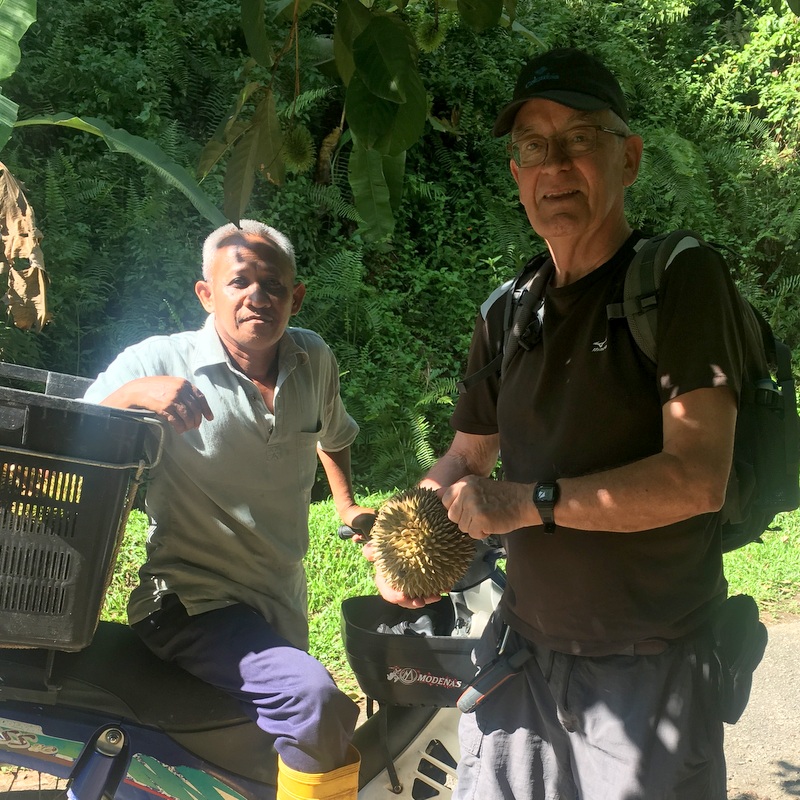 It is an easy walk along a clear trail until you can see the waterfall. A small trail brings you down to the river. It was a Saturday, but there were no other visitors and the waterfall was pristine, no rubbish!

It is a nice, powerful waterfall. We spent quite some time there, taking many pictures, making coffee and of course enjoying the durians. A very enjoyable morning. 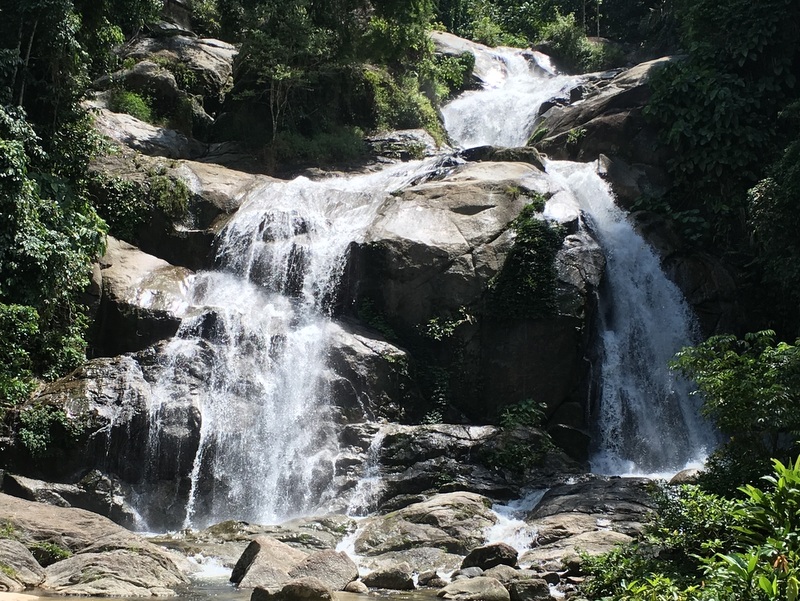 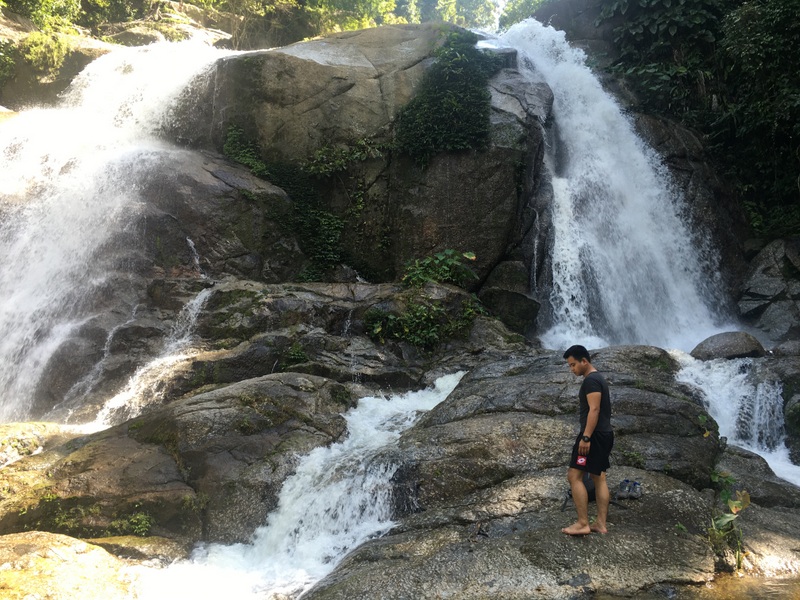 Opening the durian, with a pocketknife!

On our way out

On our way back to Taiping, we had a look at “my” barbershop, near Anak Kurau. I call it “my” barbershop, because I have been there three times for a haircut and the barber knows me…:-) The shop is built against the limestone cliffs and the last time I payed RM 5 only. During my recent Taiping trip it was closed because of Ramadan. This time it was closed too, the neighbour explained that the barber had gone our for lunch. Next time, better luck..:-) 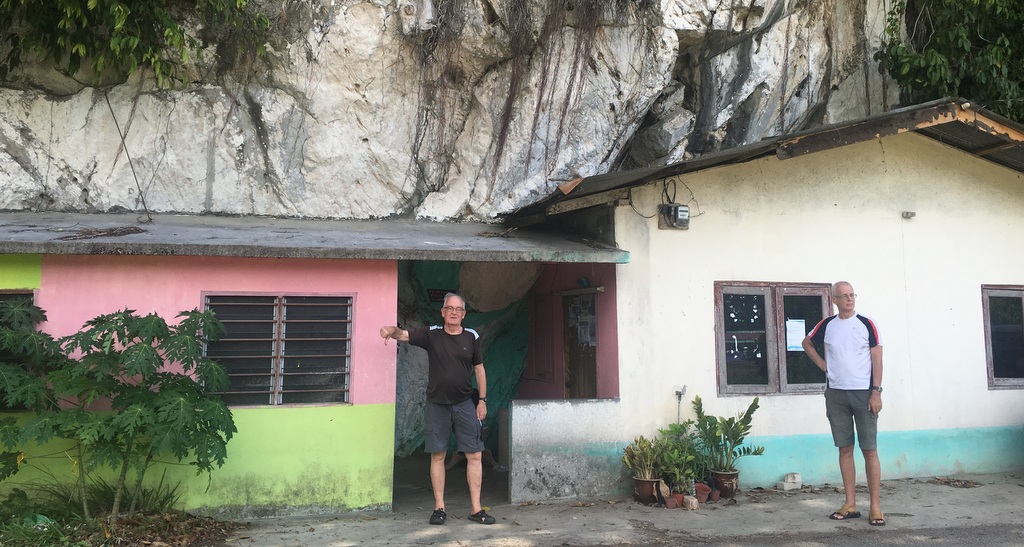 Near to the shop, there is a cafe and a small cave. A good location to take pictures. 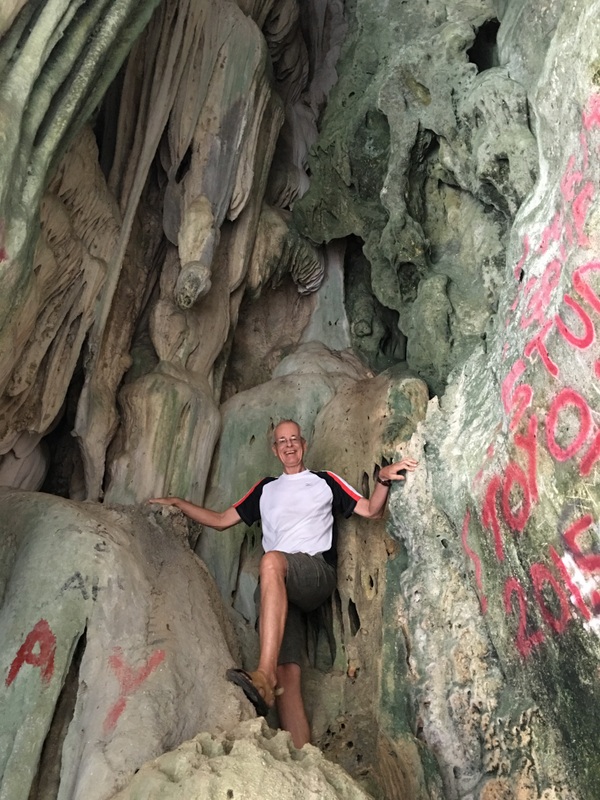 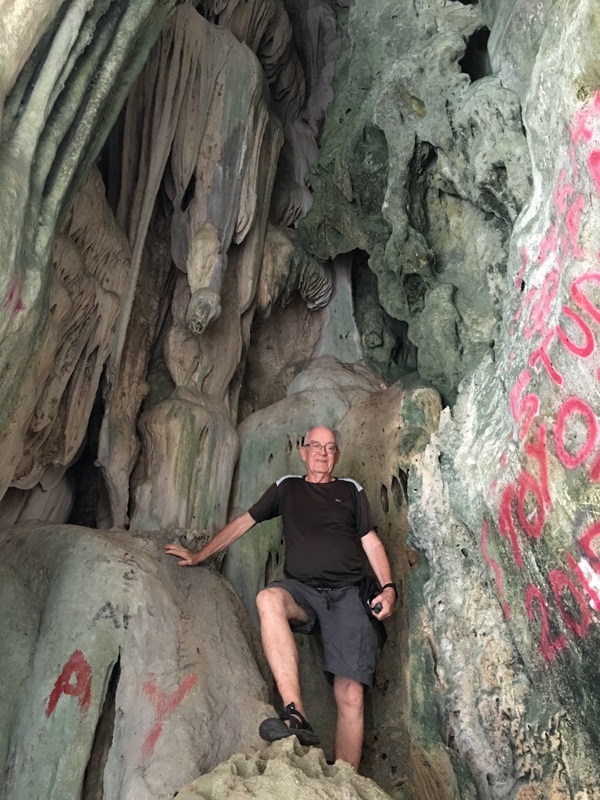 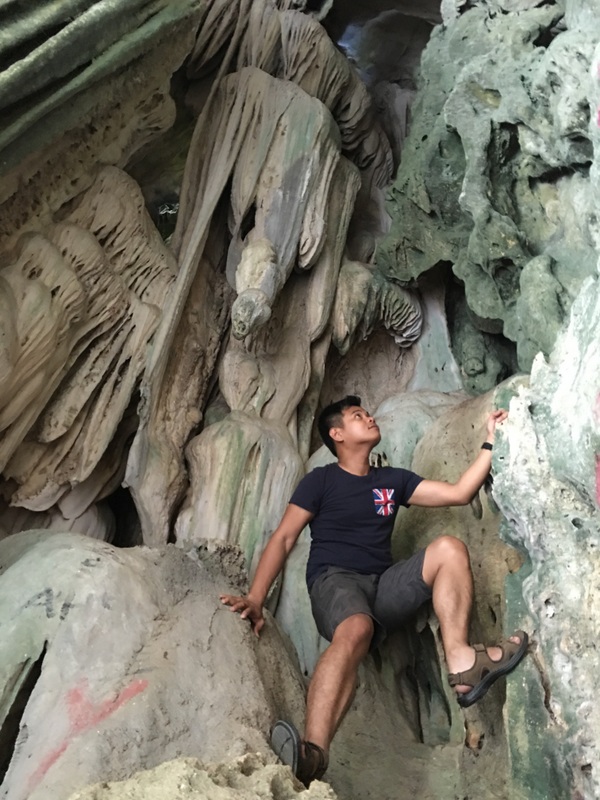 A trail starting from the cafe, follows the river for a while. Beautiful limestone formations, where Fahmi could not resist to show his climbing power…:-) 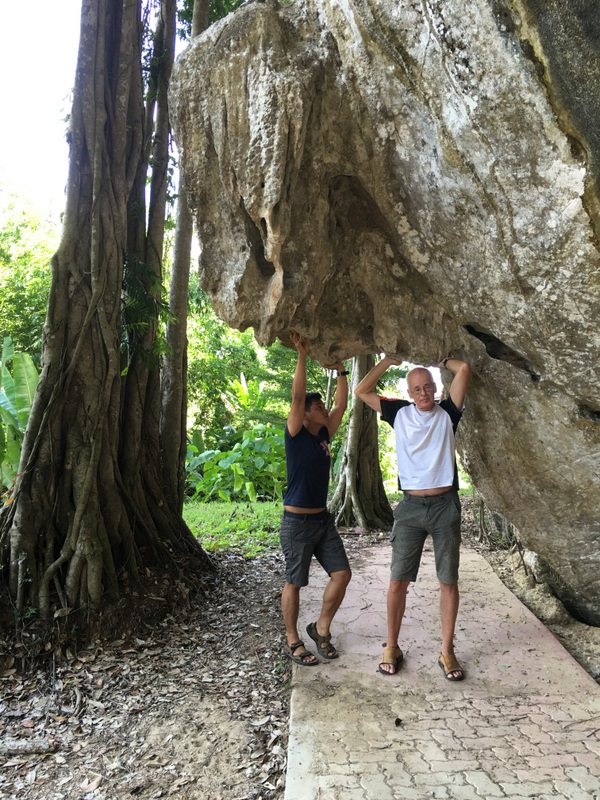 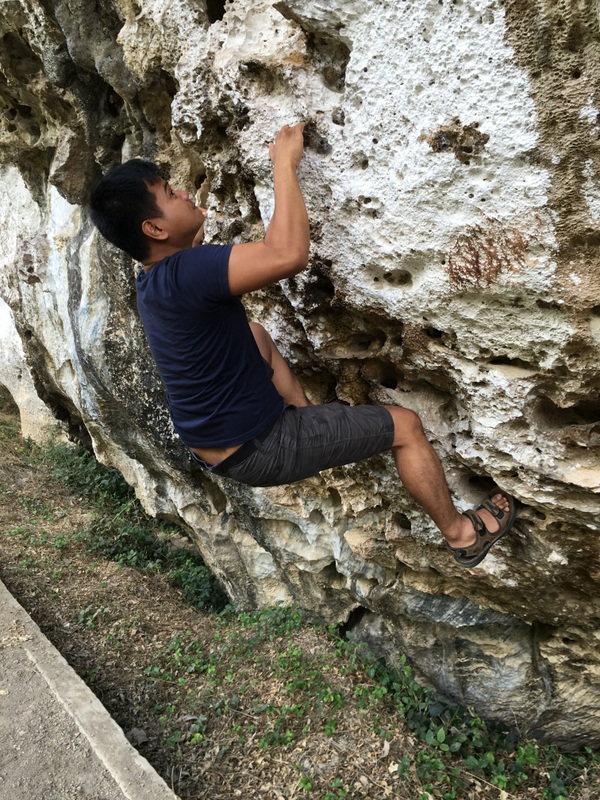 Then it was time to go back to Taiping, where we had a simple lunch in the Saiful restaurant at Changkat Jering, while waiting for Amril. He took us first to his friend, Encik Zamberi, living nearby. Zamberi could be called the local Taiping historian, he has written many books and knows a lot about the local history.

He showed us his beautiful library, apologised that it was a bit messy, because one week later there would be a wedding dinner. Then he took us to the bomoh house. The present owner, a descendant of the bomoh, is a friend of him. The friend had gone for the Hajj, the house was closed, but a caretaker opened it for us. Beautiful interior.

Paul, Amril, Zamberi, me in front of the library

Another view of the house

The back part of the house

After this visit, Zamberi suggested to visit another old Malay house, with interesting interior details. Although coming unannounced, we were warmly welcomed by the couple living there, Malay hospitality at its best…:-)

The ownet to the right

As it was getting late, we skipped a visit to Long Jaafar’s tomb, where Amril’s ancestors are buried. It was a nice afternoon, a real pleasure to meet Encik Zamberi and Amril, I hope and expect it will not be the last time.

We went for dinner to a Yong Tau Foo foodcourt. Many shops, all serving yong tau foo. Malay style, quite different from the (Ampang) yong tau foo I am used to.

The next day, before driving back to KL, I had to show Paul the “Shame of Taiping”. Some historical buildings in Taiping (presenting itself as a Heritage Town!), are just left to themselves, decaying slowly. And not in a remote part of the town, no, just opposite the prestigious King Edwards school. Pictures without comment

The Town Rest House (1894) is another example. It has been fenced off, the fence is decorated with posters, promoting the many “Firsts” of Taiping, but one of the posters was torn. Again! In my 2nd hometown report I also wrote about a torn poster and that it was replaced after I had complained about it. Let’s wait and see if this happens again …:-) 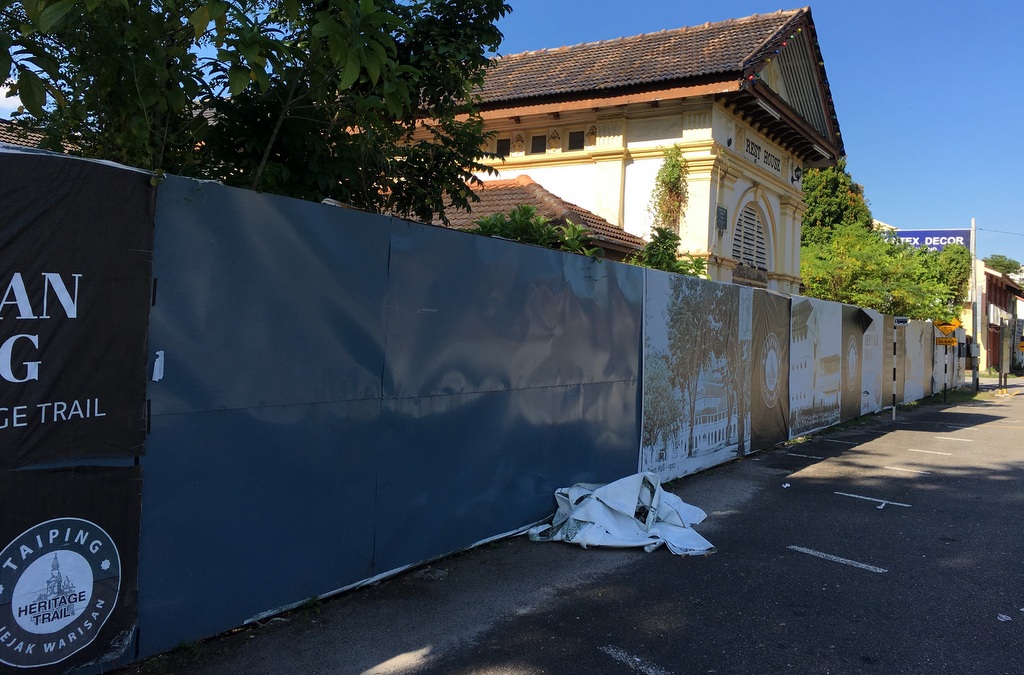 We had breakfast at the January cafe in the Old Railway Station. During my last visit I met Mei Chong who, with her sister Mei Chee, is running this cafe. I admire their energy and want to support them…:-)  So, when you visit Taiping ( or live there), have a coffee or some waffles in the January Cafe!  There is also a gallery next to the cafe with historical pictures of Taiping, and outside the building they have collected some old bicycles. Which we had to try of course…:-) 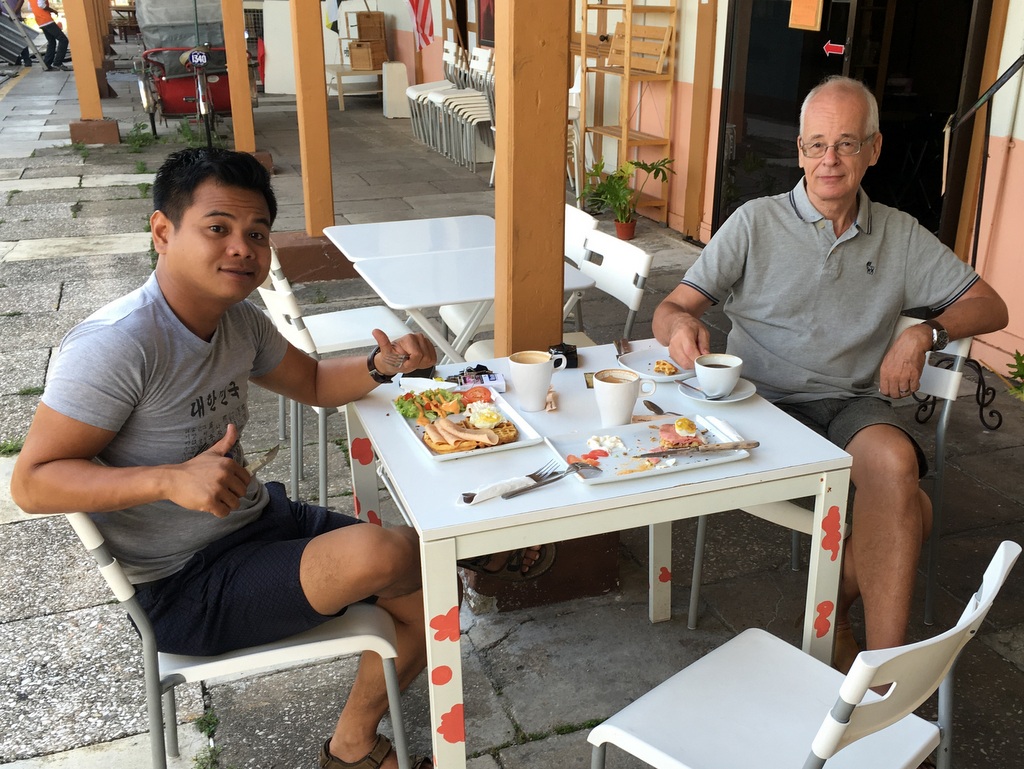 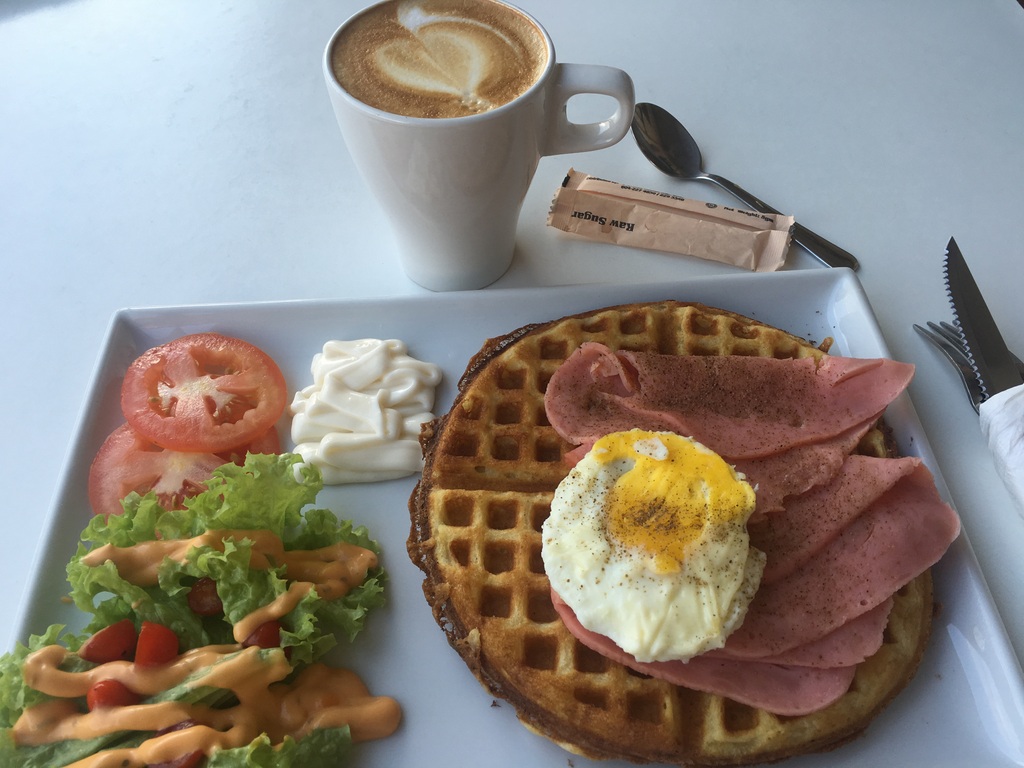 Even Fahmi is a giant, compared to Mei Chong..:-)

Dutchman on a bicycle

After our breakfast we drove back to KL. I still had many ideas about places we could visit on our way (Pasir Salak, Batu Gajah, Papan, the Tualang tin dredge). But we had done already a lot and were getting a bit tired.

Then I got an idea. I had heard a lot about the “mysterious” Tasik Cermin, in Ipoh. Also seen pictures of this “Mirror Lake”. I knew that it was somewhere around Gunung Rapat, and could be accessed only via an active quarry and a tunnel. .According to some reports. the quarry owner did no longer allow access to the lake. Why not try to find it

How to go there? Surprisingly, by just following the Waze app on my smartphone…:-) The wonders of the Internet. When we arrived at the entrance of the quarry, there was indeed a No Entry sign. But no security guards, and we noticed a few more people walking in. So we did the same..:-)  A big quarry, we had to ask a friendly worker where the entrance of the tunnel was.

Quarrying is still going on

The entrance of the tunnel

The exit at the lake

And here it is, Tasik Cermin. A mirror lake indeed. Beautiful and serene. 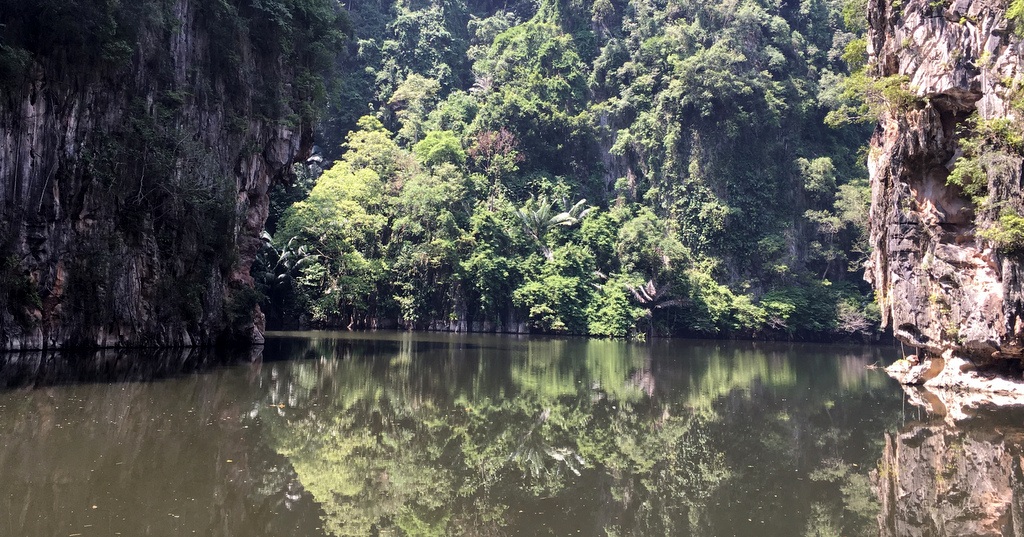 The tunnel ends at a jetty with a platform where you can sit down and admire the lake. There is no path around the lake. A few pictures

Back home, I tried to find more information about this lake. One reference mentioned the coffee-table book about the history of the Kinta Valley.  I have a copy of that book, here is the relevant passage:

The writers of this book?  Lubis and Salma, whom I just had met a few days earlier..:-) As I have said many times, Malaysia is a small world…:-)

It was a trip full of variety, as usual.