Jean Tinguely (1925-1991) was a Swiss artist, best known as a creator of “machine sculptures” .  Made of scrap metal and junk, with an electric motor which keeps part of them in motion, these useless, playful and sometimes noisy machines have fascinated me from the first time I saw them, in the Municipal Museum of Amsterdam. That was in 1973, more than 40 years ago…:-).

This year, 25 year after Tinguely’s death, the Stedelijk, as it is commonly nicknamed, has an impressive retrospective of his work, named MACHINE SPECTACLE with over a hundred machine sculptures, many of them in working order. The exhibition is open until 5 March 2017 and definitely worth a visit.

Here is one of his works that actually belongs to the museum collection. It is called Meta II, created in 1971, and I have seen it in 1973. It makes an awful lot of noise…:-) 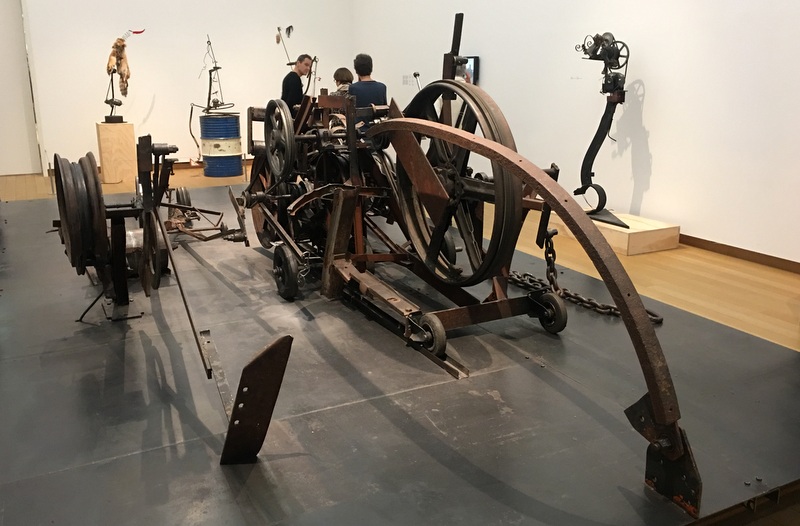 Not during my recent visit. Many of Tinguely’s creations are actually quite fragile, the museum staff has been busy many months to get some of them them working again. Therefore it was decided not to keep them running permanently. Only on specific times, they work for a short period and only when you push a button. 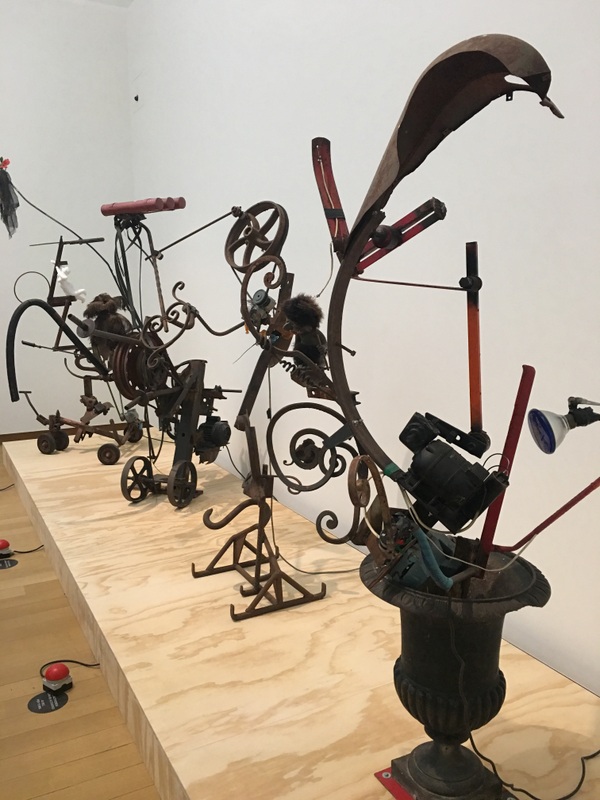 Here you see a few of his machines. Some of them have a timer, so you can see when you have to push the button, many have not, you just have to try. Not really a good design.

The result is that the (many) visitors walk around the many rooms with (inactive) exhibits, until they hear a noise. Then they hurry to where the sound came from, because it lasts only a short time.

Quite funny, in a way.

Here are a few working ones. Doesn’t it make you feel happy when you see those useless contraptions in action? But, as you will notice, only for a very limited time.

A few more, not in action. Click to enlarge and see details. Notice the paper tape in two of the pictures. Those machines create “art” themselves when they are operating! Tinguely’s Metamatics (Wikipedia) has more info about this

And here is Gismo, created in 1960, also belonging to the collection of the Stedelijk. It is so fragile that even during this retrospective, it will be operated (by one of the museum staff)  on a few specific days only. Check the website if you are interested, scroll down to “When do the machines move?” 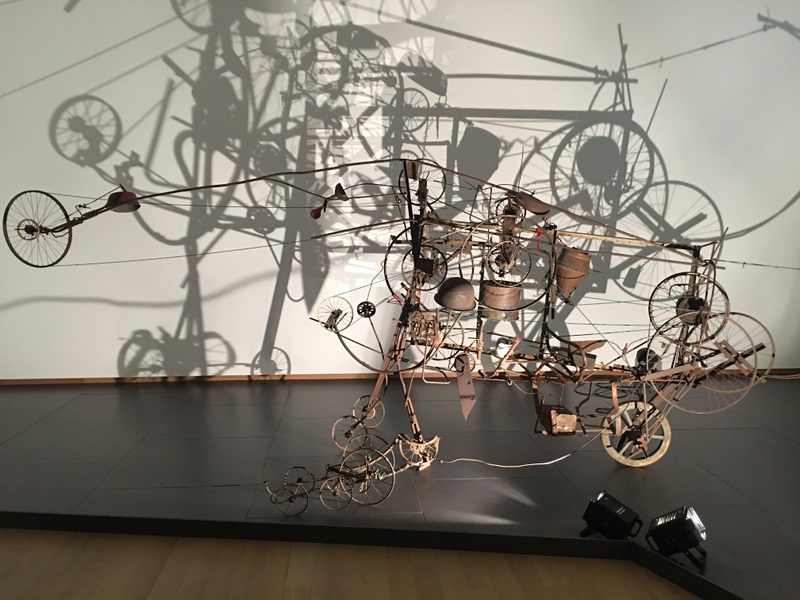 This one, looking more serious, has been on loan from another collection, the Centre Pompidou in Paris. Created in 1967. 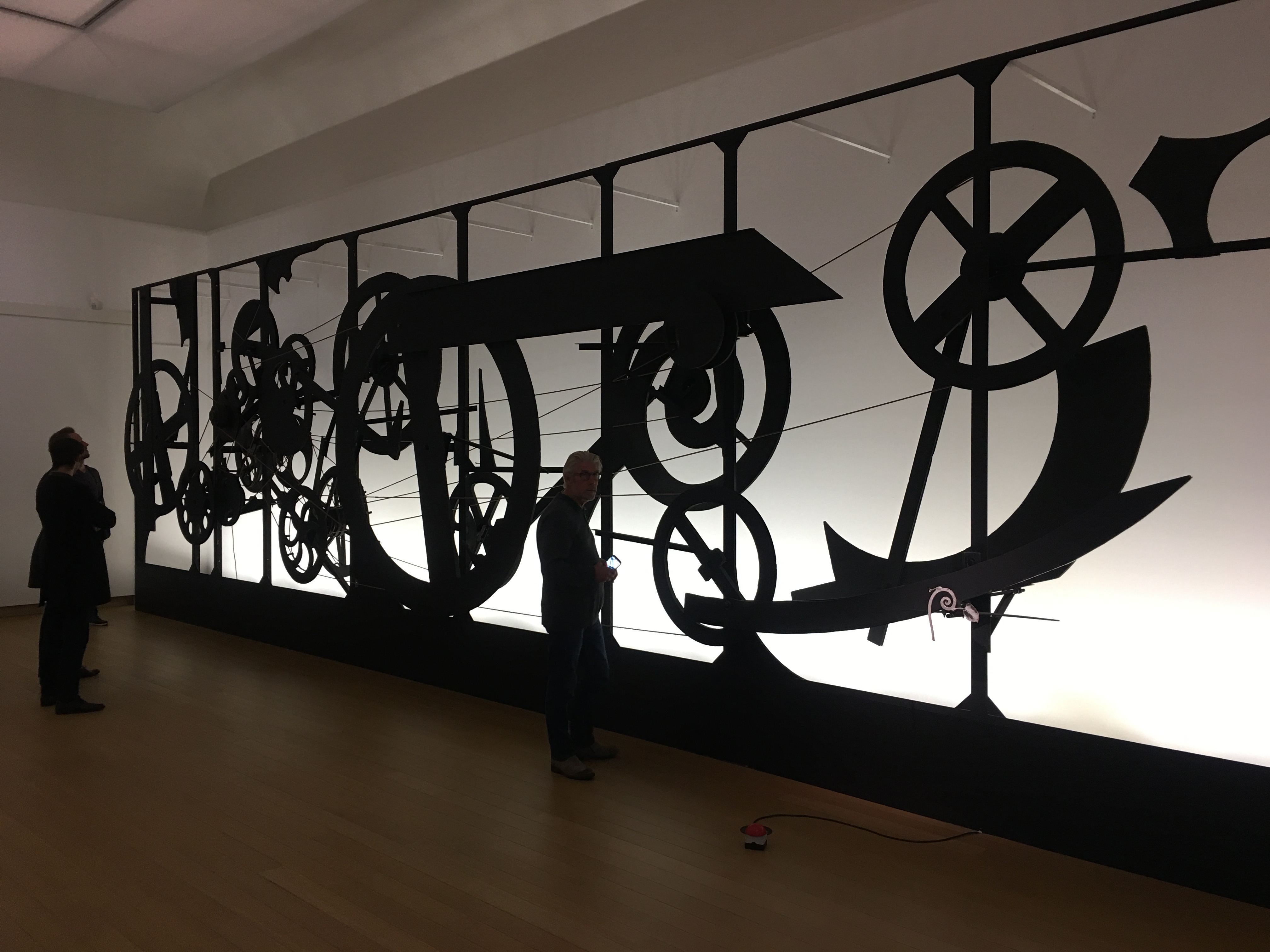 But how serious is it? The title  is:  Requiem pour une feuille morte. Not a requiem for a dead  girl (fille) but for a dead leaf (feuille)  Here is this requiem in action.

Tinguely belonged to the Parisian avantgarde in the mid-twentieth century and was a member of the Nouveau Réalisme group, founded in 1960 and dissolved in 1970. Many well-known artists in this group, like Yves Klein, Spoerri, Niki de Saint Phalle and Christo.

Actually Tinguely and de Saint Phalle were married and have been working together often. In this exhibition one characteristic work of her is exhibited. 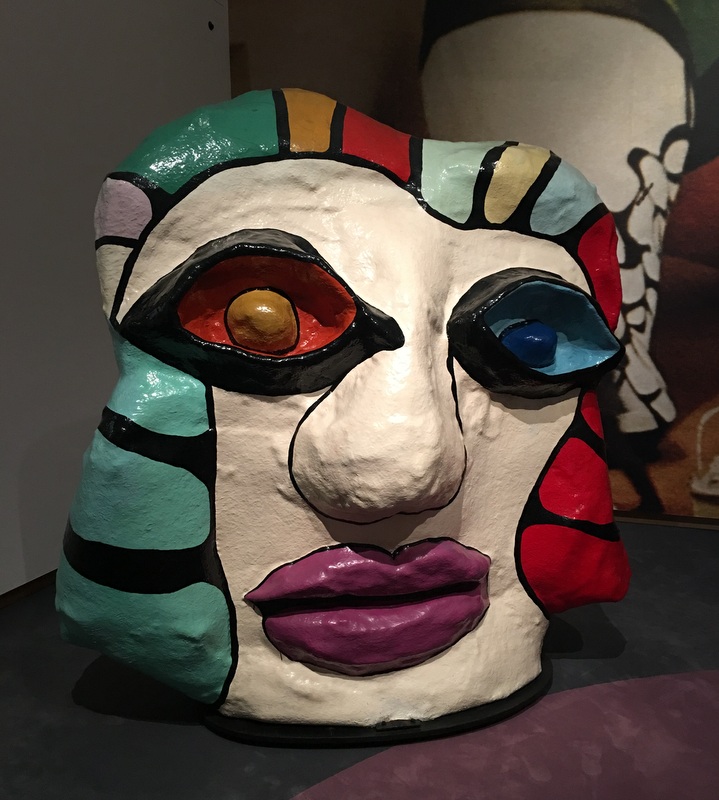 And here is a co-production of the two artists, named  Crocrodome (1977) 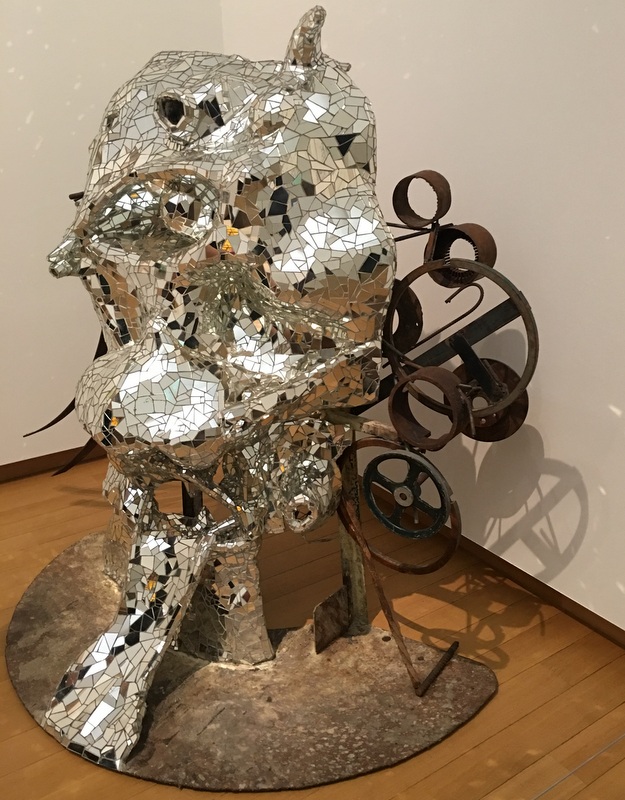 A very interesting one is this model for  a huge project in a forest near Paris, Le Cyclop. Started in 1969. Many artists have been contributing to it, it was finished by de Saint Phalle in 1994, after the death of her husband. I had never heard about it, really like to visit it when I am back in Europe. 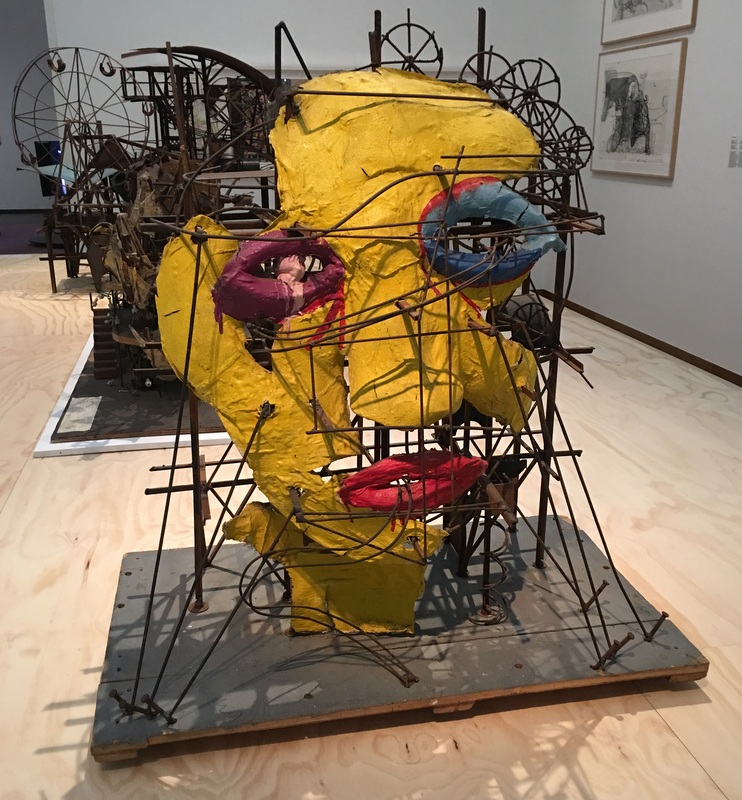 Very impressive is also the Mengele-Totentanz, a late work (1986) with an interesting background story. A farm, near Tinguely’s studio was struck by lightning and burned down. Several cattle could not escape and died. Tinguely immediately started to collect scrap metal from the remains and created this huge work of art. Part of the installation is a harvester made by a firm named Mengele (the firm still exists). But Mengele is of course also the name of the notorious German concentration camp physician. It gives this monumental work a double meaning. 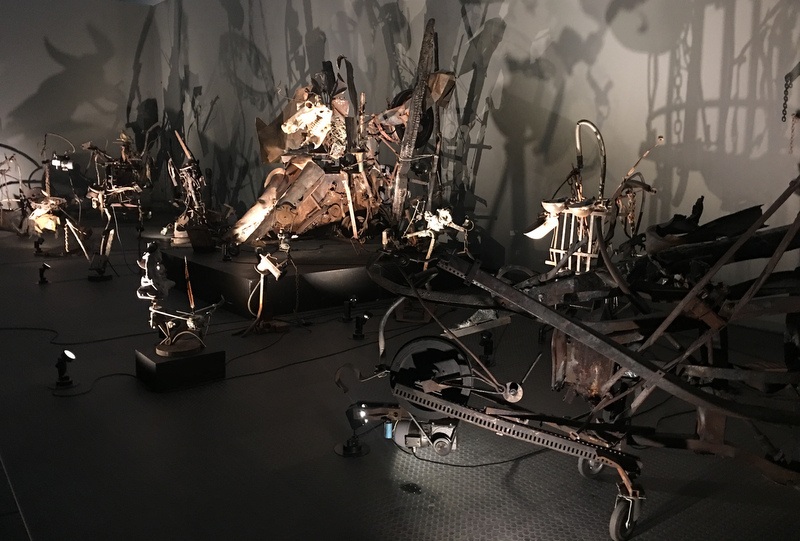 The Totentanz belongs to the collection of the Tinguely museum in Basel and has never before been exhibited in the Netherlands. Must have been a big job to disassemble it in Basel, transport it and then assemble it again in the Stedelijk…:-)

Here is a video