In a recent blog, Our nearest neighbour? , I reported about the discovery of the planet Proxima b, orbiting around a star, “only” 4.22 lightyear away from Earth. In several media it was suggested that within a few decades a spaceship could be launched to reach this planet. A spaceship is science-fiction, but there exists an ambitious plan to send a swarm of space-chips to Proxima b within a few decades. I promised to write a separate blog about this Breakthrough Starshot  Here it is.

In 1865 the French novelist Jules Verne wrote De la Terre à la Lune (From the Earth to the Moon), in which he describes how three adventurers travel to the moon in a projectile, shot from the earth by a large cannon. I have read it spellbound when I was a teenager. You can read it online here , it is fascinating (and hilarious too).

The illustrations are beautiful. Here  are some. From left to right the three adventurers climbing into the projectile, the comfortable interior and the firing of the canon. 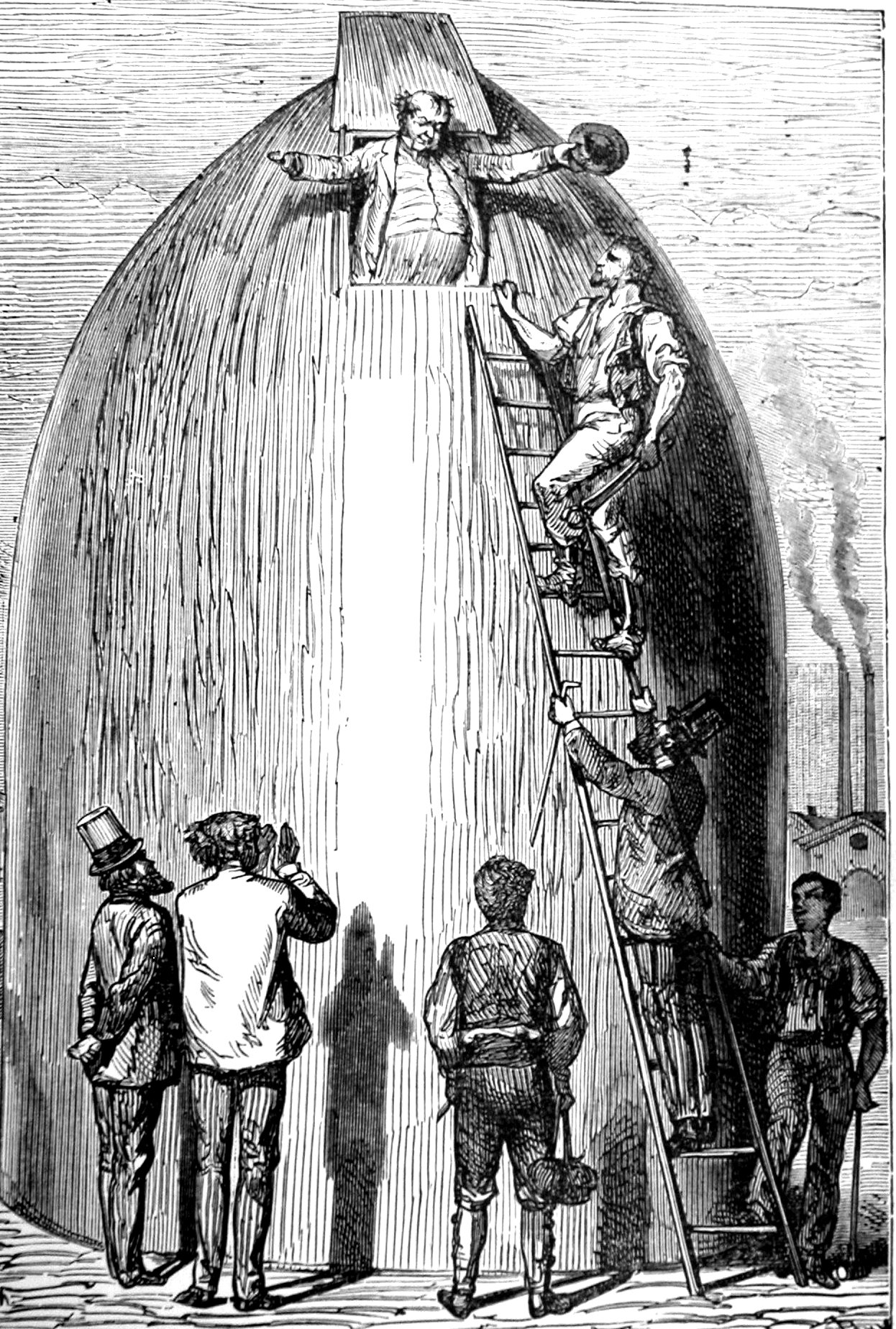 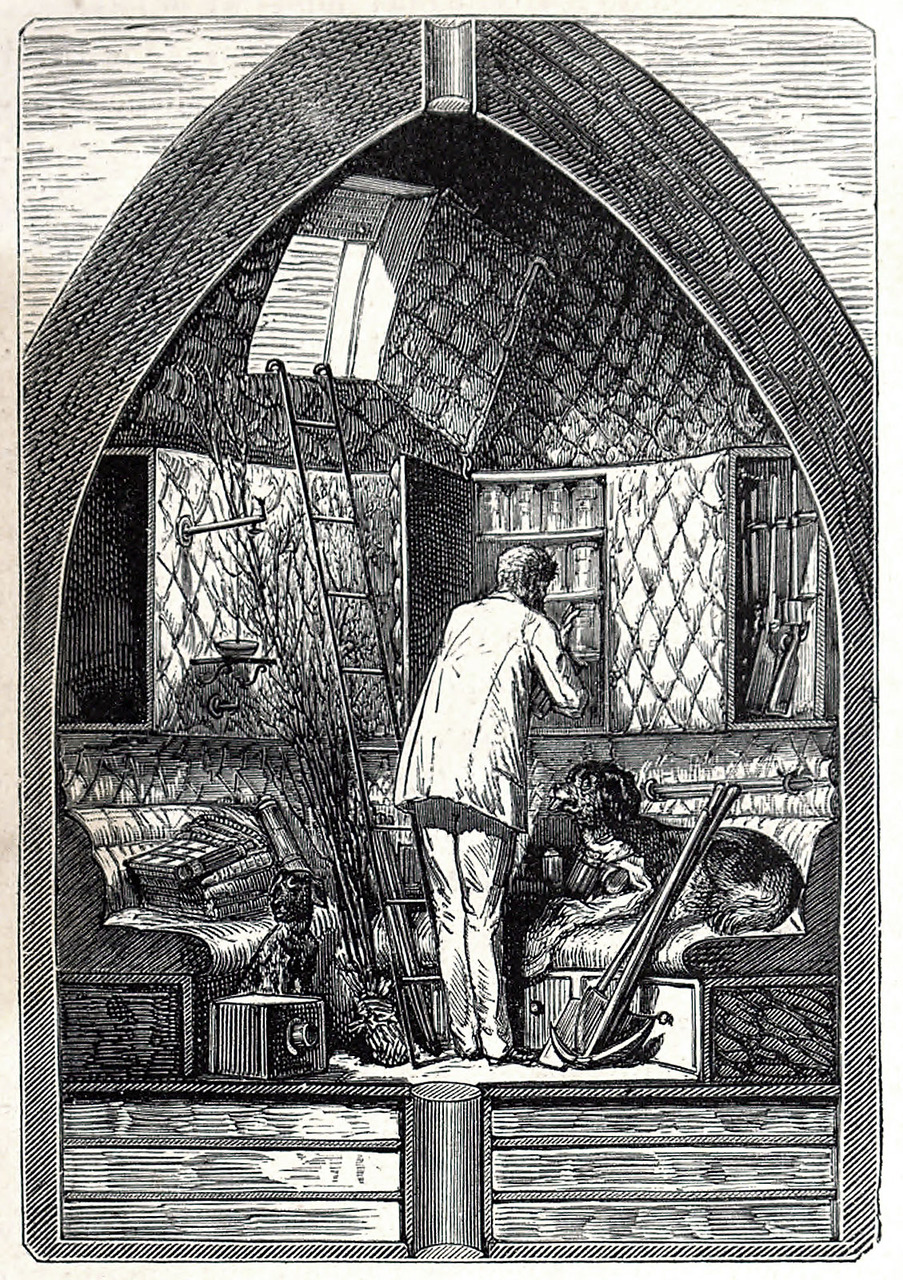 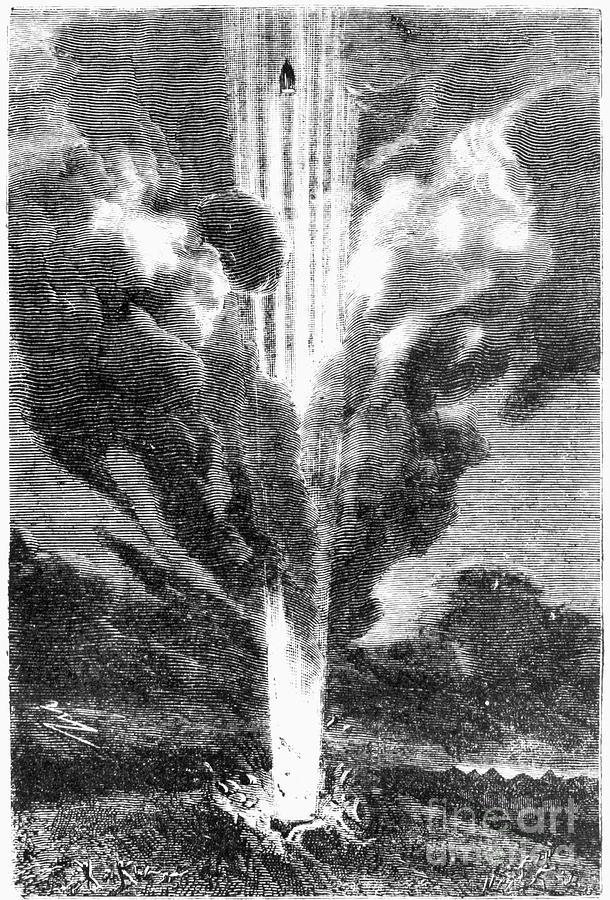 Why this introduction? We know now that this method is not used in our space age. We don’t shoot our spacecraft to the moon or other planets, we use rocket propulsion.  The  Voyager 1 (825 kg) was launched by a Titan-Centaur rocket (600.000 kg). The images show the launch, the Voyager spacecraft and a structure diagram of the rocket. The Centaur is mounted on top of the Titan. A huge amount of fuel is needed to launch a “tiny” payload! 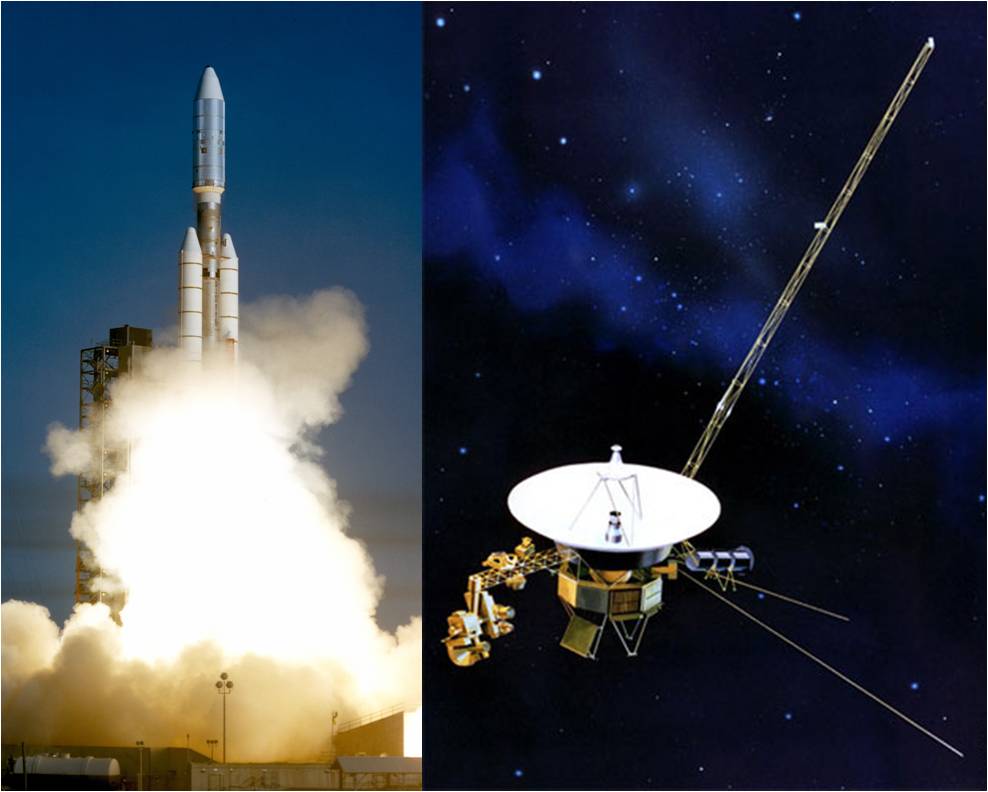 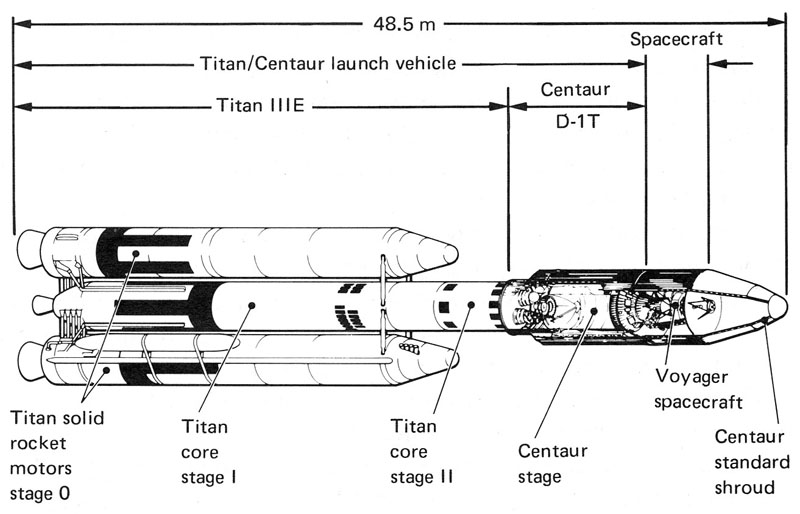 After completing its mission, the Voyager is now leaving our Solar System with a speed of more than 60.000 km/h That is fast but it would still take about 75.000 year to reach Proxima b, if it was going in that direction (which is not the case).

So we can forget about  space travel to the stars, using rocket propulsion, at least in the foreseeable future. Is there another option, more in the style of Jules Verne?

Actually there may be one…:-)

One year ago Travis Brashears, a graduate student at the University of Santa Barbara in California, and his supervisor, Philip Lubin, professor of astrophysics and cosmology at the same university, published a paper Directed Energy Interstellar Propulsion of WaferSats in which powerful lasers “shoot” miniature (~ 1 gram only!) electronic chips away from earth in the direction of a nearby star, with a speed approaching the speed of light! Here are the (main) writers , Brashears left and Lubin right. 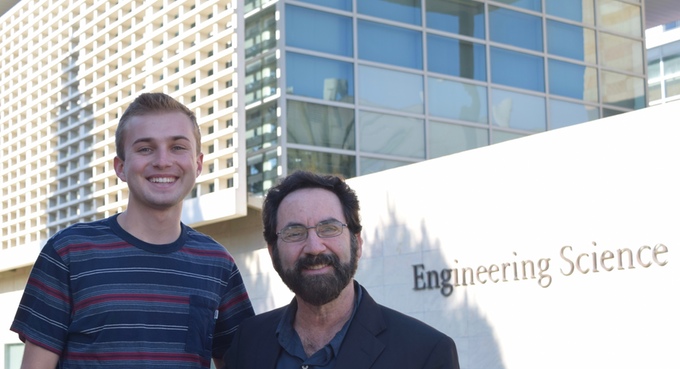 Does this sound as science fiction? For me it does. But apparently not for these guys.

Sure, light exerts pressure, there are several projects going on, using sunlight propelling a solar sail , a bit similar to the sail of a sailing boat being blown by the wind. One successful project is IKAROS, a solar sail of 196 m2  (!) , launched in 2010 by Japan. Here an artist impression of the sail, with Venus, its destination. The sail is so big. because the thrust of the sunlight is only small. 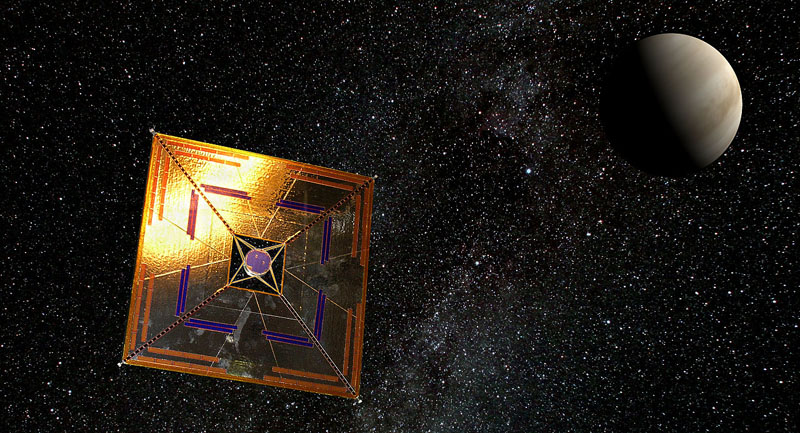 Next year March the LightSail 2 will be launched. To the left the actual spacecraft, a so-called cubesat. To the right an artist impression of the LightSail in space, with a deployed sail. Notice how small the cubesat is compared to the sail! 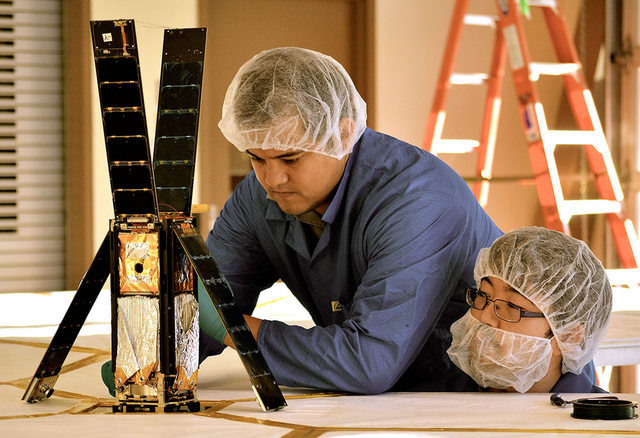 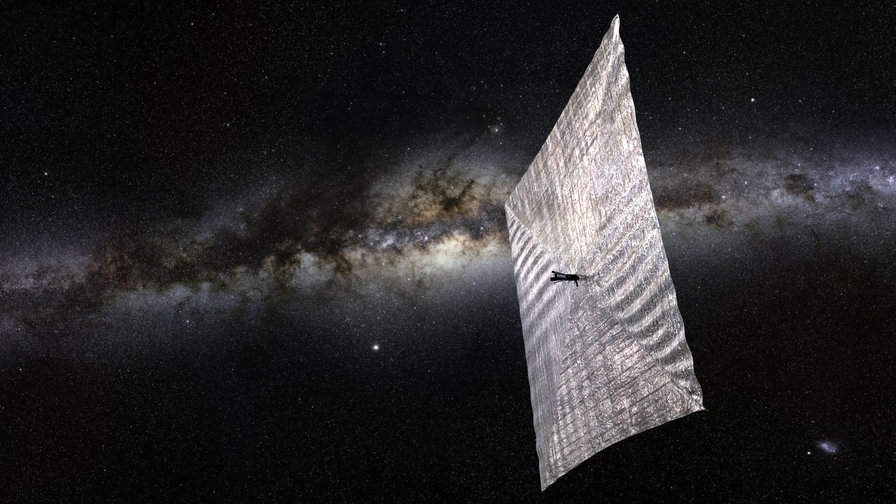 These projects are using sunlight. The project of Brashears and Lubin is futuristiic.

Here is an artist impression of the launch. Mind you, the spacechip is the tiny dot in the center of the light sail! 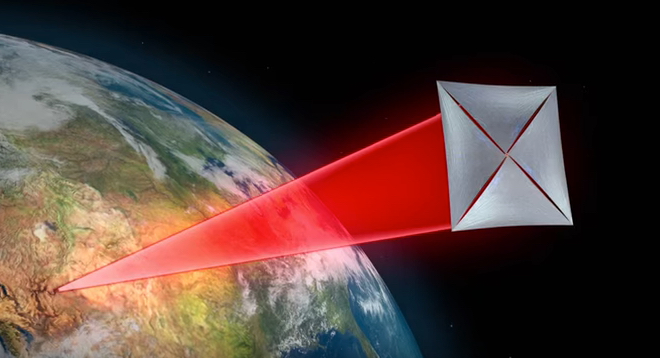 Futuristic indeed. The time span of 20-30 year is because much of the technology still has to be developed. Designing a spacecraft on a centimeter-size, gram-scale chip, developing a light sail with a thickness of 1 micron or less, building a 100 GW laser and many more challenges.

Here another artist impression. The plan is to build a so-called “phased”  array of smaller lasers, with a combined power of 100 GW. If you use 100 kW lasers ( at the moment the maximum power available), you need a staggering 1 million of them. 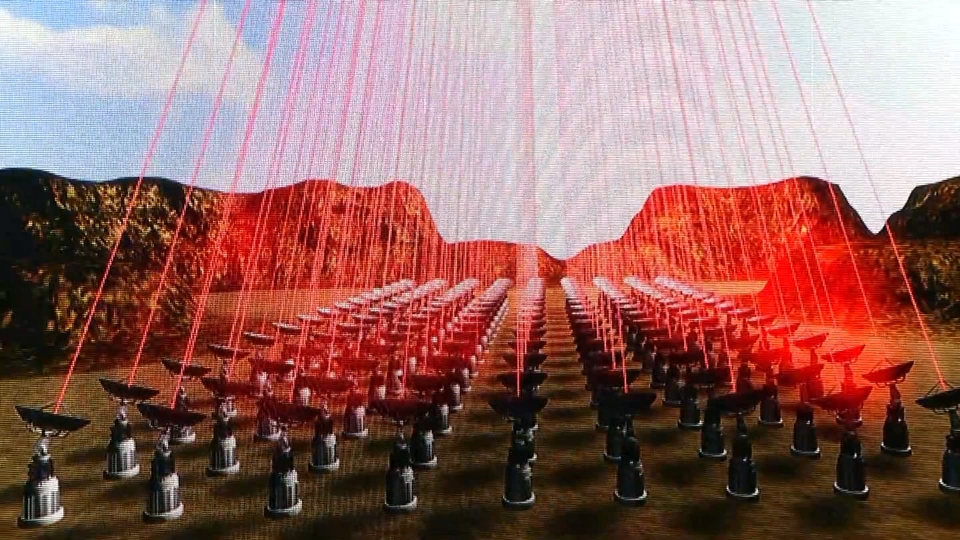 I am skeptic, as usual…:-) But not everybody is. Yuri Milner, for example is optimistic.  This Russian/American tech entrepreneur and multi-billionaire,  started as a physicist and is very interested in the big question “Are we alone in the universe“. In July 2015 he announced, together with the British physicist Stephen Hawking, the Breakthrough Initiatives , a program to search for extraterrestrial intelligence. At that time the program consisted of two parts.

In April 2016, part 3,  Breakthrough Starshot, was announced by Milner and Hawking. Milner and Mark Zuckerberg (FaceBook) will contribute another US$ 100 million to explore the technological feasibility of the program outlined above. 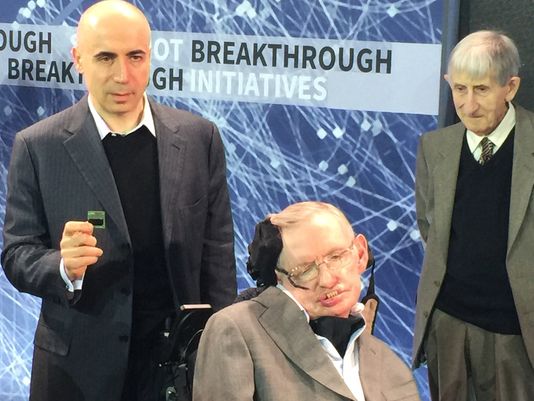 From left to right Yuri Milner (holding a protoype of a spacechip in his hand), Stephen Hawking and “eminence grise” Freeman Dyson, a physicist and cosmologist, now 93 year old. If you are interested in really futuristic ideas, have a look at his Dyson Sphere 🙂

Below is an animation of the process. A few comments may be useful.

I have been working about two weeks on this blog, reading and collecting as much information as I could find. To be honest, I became more and more skeptic.

A few days ago Scientific American has published a very informative article about the Starshot Program: Inside the Breakthrough Starshot Mission to Alpha Centauri. Many scientists were asked for their opinion about the project. There is respect for the technological challenge, but scepsis about the scientific value.

1 thought on “Neighbour, here we come!”