Last year we were not successful. Our target was a waterfall in the Beruas region, discovered by Siang Hui. But when we arrived at the trail head, we were stopped by a soldier. A military exercise was going on and access was prohibited.  Pity.

We could have tried the same fall again this year, but the soldier was vague about how long the exercise would last, possible a long time. We didn’t want to take the risk. Instead Siang Hui suggested Lata Jala in the Bidor region, a waterfall he had discovered on Google Earth but never yet visited himself.

Lata Jala, I said, I have never heard about that fall. But you have visited this fall already, he replied, and even reported about it!

And he was right, in March 2010 I visited this remote fall with Harry and Rani, here is the report Ulu Gepai . However, when I had a look at my own(!) report, I noticed the last paragraph:

A hike of 20 km, taking 9.5 hour? Forget about it, I could not do that anymore, was my reaction. But there is a shorter access route, Siang Hui said. And not only was he  right again,  I had actually used that route during a second trip, August 2010, this time with Rani and Richard.

Here is a GE screenshot of our first hike, starting at the Gepai waterfall. Click to enlarge for details. A long hike as you can see… 🙂 But notice the red line. On our way back we took a wrong trail, which probably  would have lead us to Kg Senta. Could that be a shorter approach?

Here is our second hike in August (yellow line). It was possible, using a 4WD to follow a  farm road until the end and park near a farm. We lost more than one hour by taking a wrong trail, but taking that into account, a hike to Lata Jala would take about 4-5 hours.

But as it was rainy season, we should better start early. Also I was expected the same evening in Parit Baru, for the CNY party of Aric and his family. Siang Hui and Nick were already in Teluk Intan, celebrating CNY. Teoh was coming back from Penang, Rani and I started from the Klang Valley. The three of us decided to stay overnight in a Bidor hotel, meet Siang Hui and Nick for breakfast at 7:30 am, after that start the hike.

On the 2nd day of CNY Rani and I met in Bidor for lunch and we checked in, the hotel was booked by Teoh who would arrive later. How  to spend the afternoon? Siang Hui suggested the Seri Kampar Fall, not far from Bidor and an easy five-minute walk from the main road. He can sometimes be a bit optimistic in his time estimate, but this time he was right…:-) First a country road, then a clear trail, a bit of scrambling at the end. 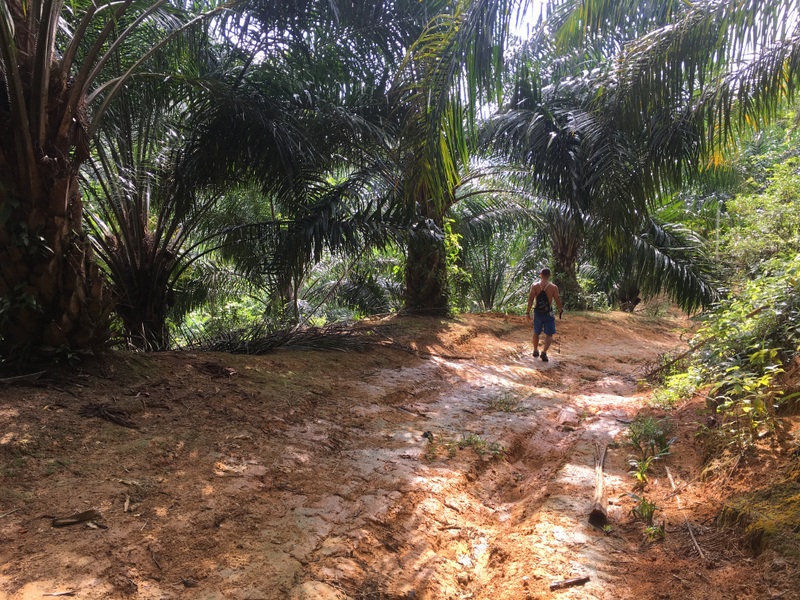 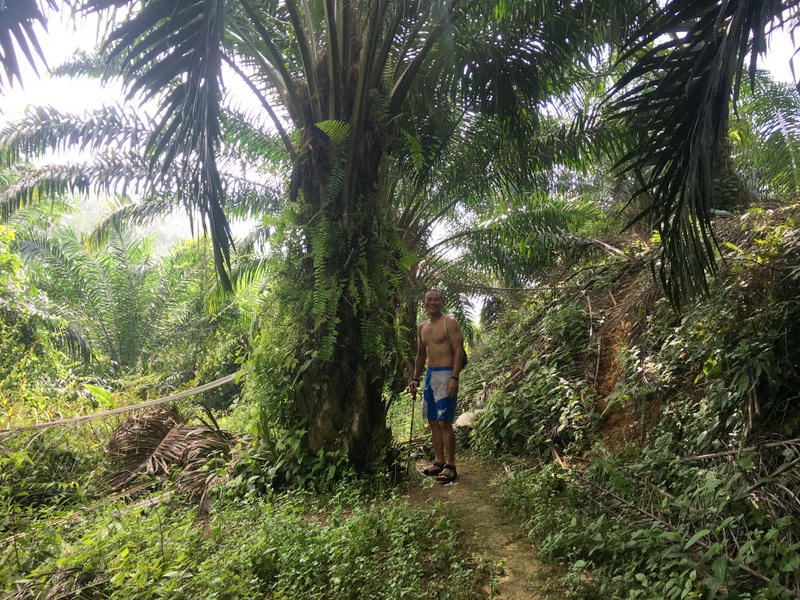 The fall, more a cascade, did not have a lot of water, but interesting to find it so near to the main road. We could not stay long, because it started to rain. 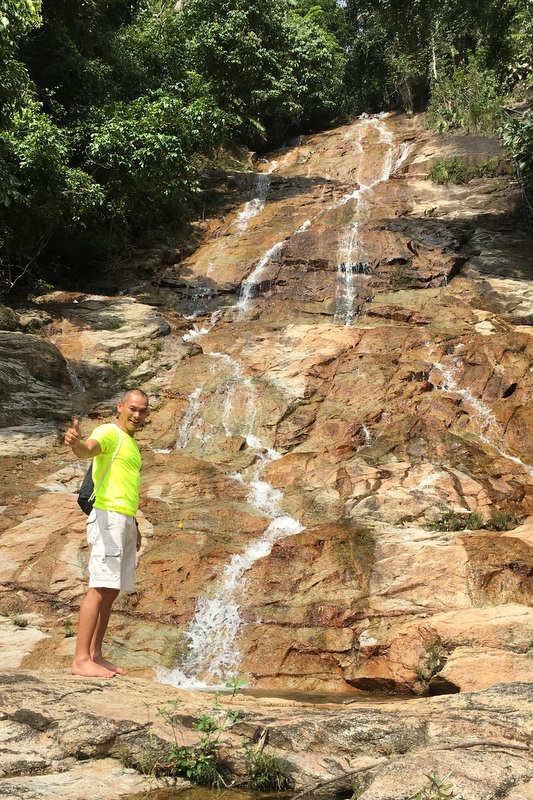 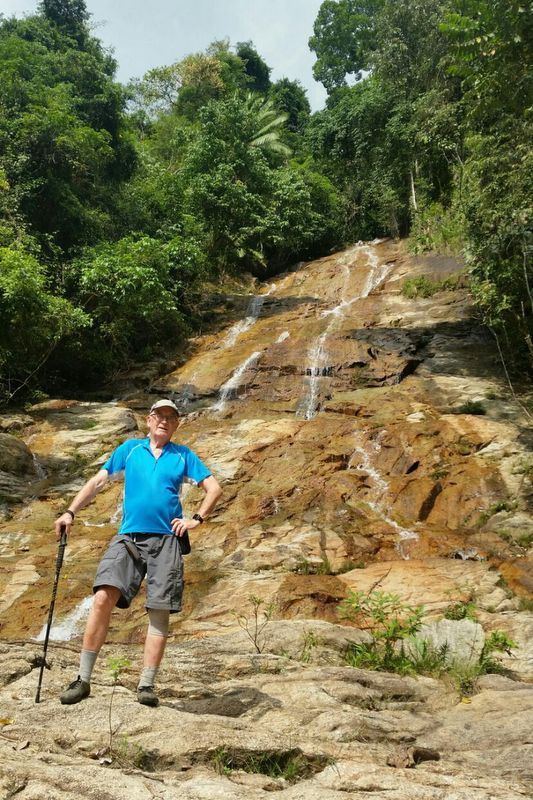 Back in the hotel, we met Teoh and had dinner. A few Chinese restaurants were open already. The hotel was located near the exit of the highway and probably catering for travelers. The room for three was quite small, but good enough for an overnight stay, and none of us snored. There was even some fitness equipment..:-)

Of course I had to try it 🙂

The next morning we had breakfast  in restaurant Pun Chun, famous for its duck noodles. It was crowded, we were lucky to find a free table when we arrived. 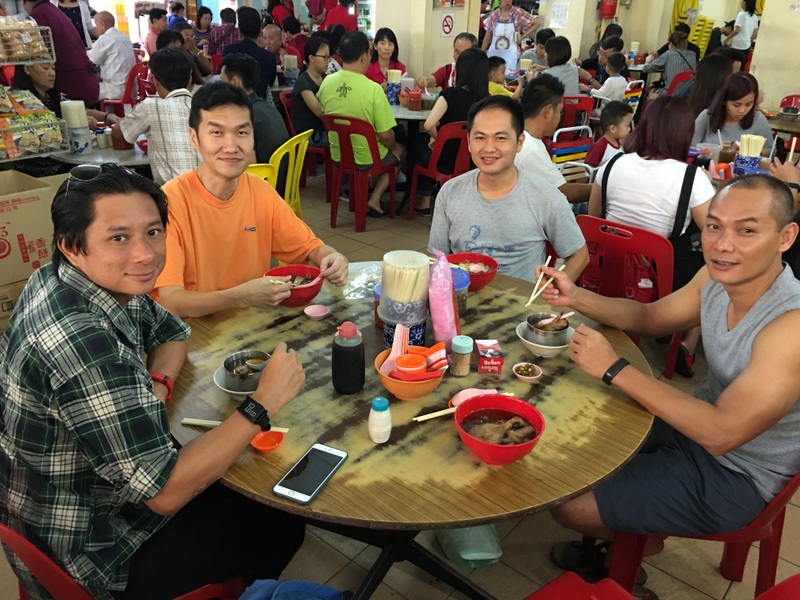 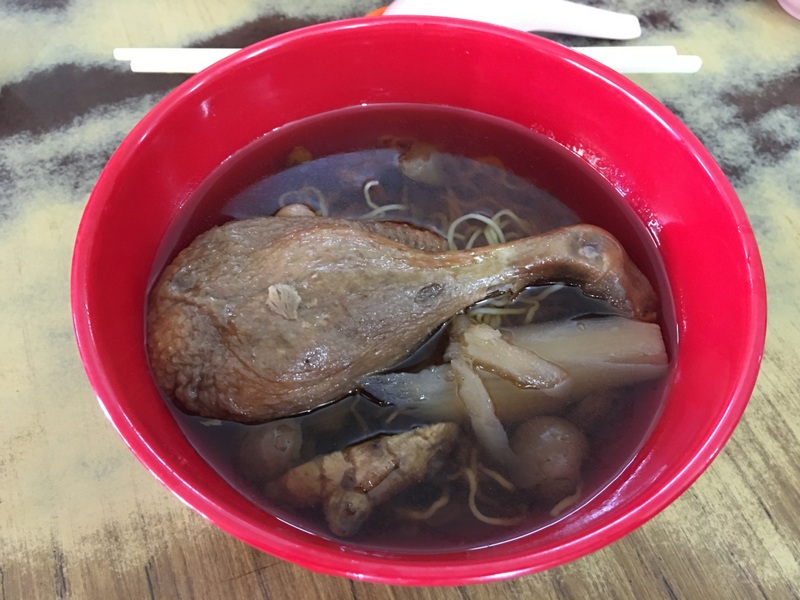 From  Bidor it is only 10 km to the trail head. The last part is a farm road,  Teoh’s 4WD came in handy. We started at 9:15 am. Nick had forgotten to pack his old kampung Adidas, but had managed to buy a brand new pair.  Gentlemen shoes..:-) Also note the diiference in size. 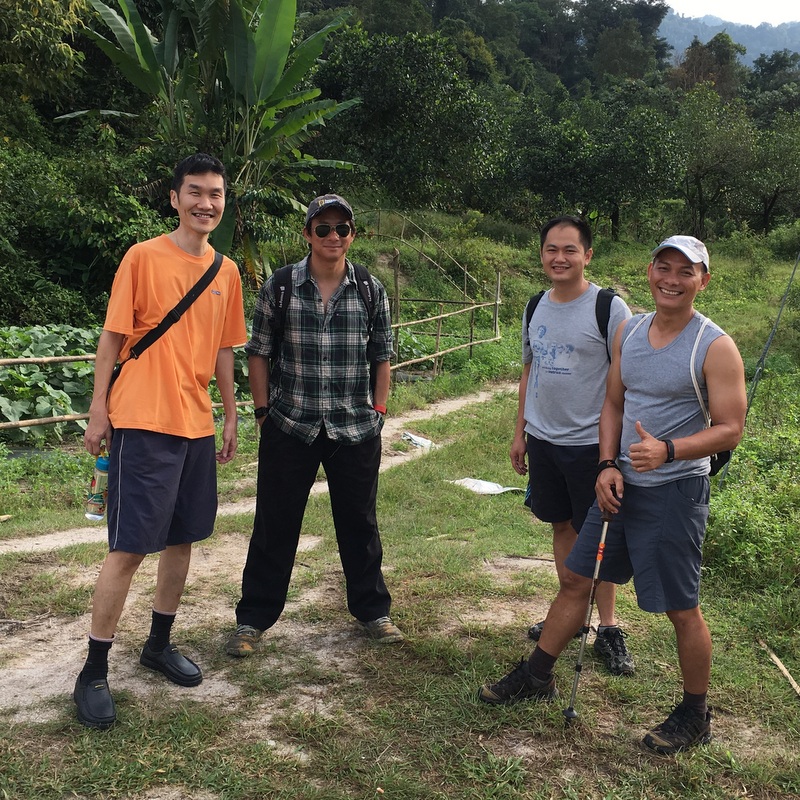 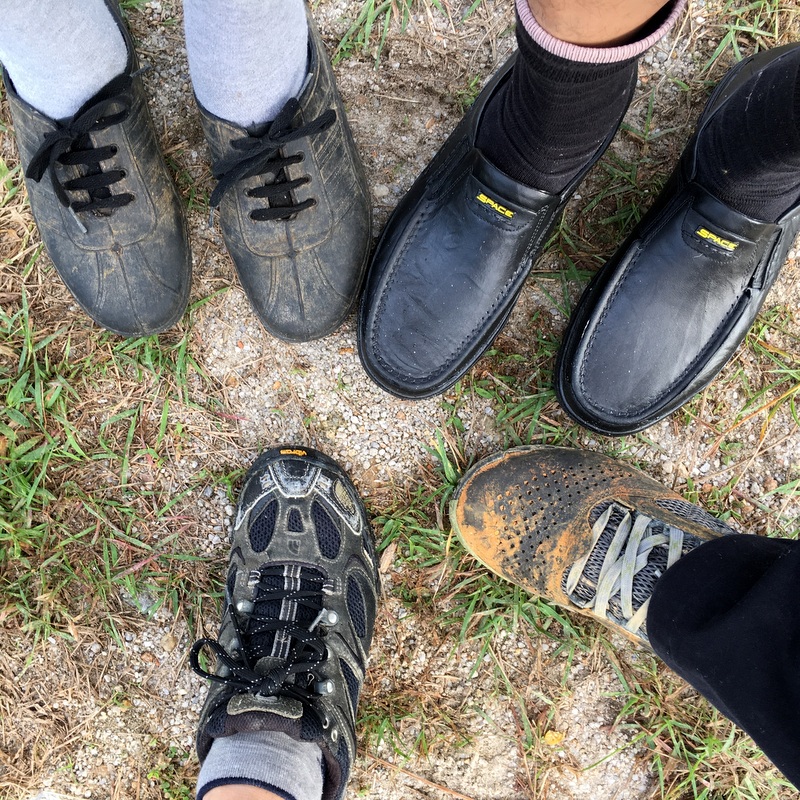 The first part of the trail is clear and in use by the Orang Asli. We crossed a small stream and passed an abandoned Orang Asli house. Progress was fast and in about one hour we reached the junction with the trail coming from Gepai. 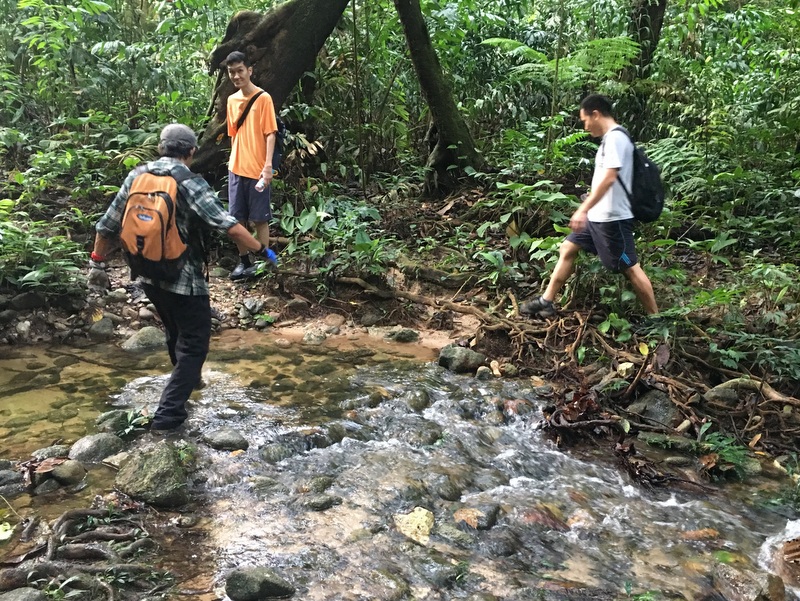 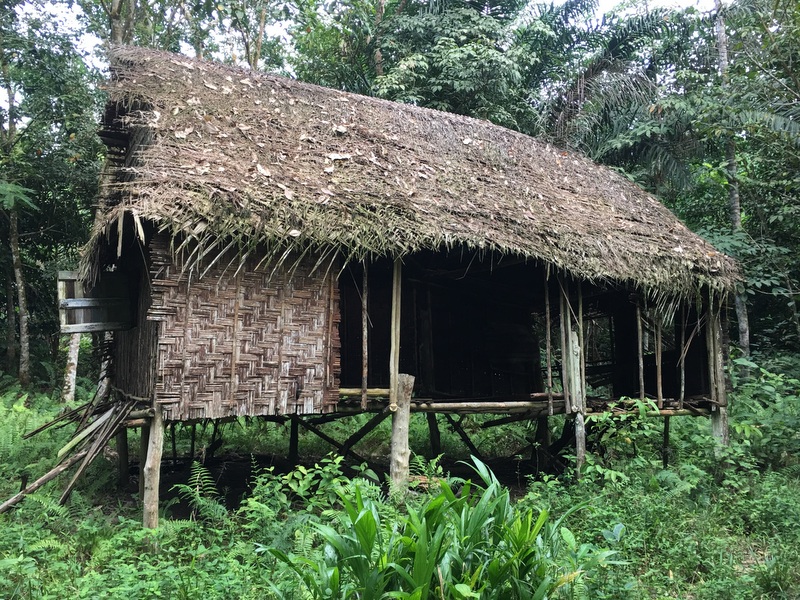 In good spirits we continued, the trail became smaller but was still clear, here and there we needed a parang. Here is the GE map of our trek, in red. As you see, the red trek doesn’t reach the Jala fall!

We encountered a minor problem when we reached the river crossing. I had forgotten to mark this crossing on my GPS and neither Rani nor I could remember whether we had to cross the (Gepai) river or not. So we tried first to find a trail at this side of the river, wasted some time and finally discovered that we had to cross the river, where we found the continuation of the trail. A few hundred meter further the trail reached the tributary Sungai Latajala with the waterfall not more than 500 meter away.

And there the reasonably clear trail suddenly stopped.

In retrospect of course we should have concluded that from there we had to river trek. But (see above) Rani and I did not remember any river trekking. So, while we waited, Siang Hui and Rani tried to find a way along the slopes of the river, trying both sides, chopping a lot,  scrambling up and down. It took more than one hour to come to the conclusion that the only reasonable approach would be river trekking.

Here is a more detailed GE map of the last part. For those not familiar with the workings of a GPS, when you stay at the same spot for some time, the GPS readings will scatter around your location. And when you are in a valley with steep slopes, the readings can be erratic, as can be clearly seen in the last sections of the green and yellow treks. 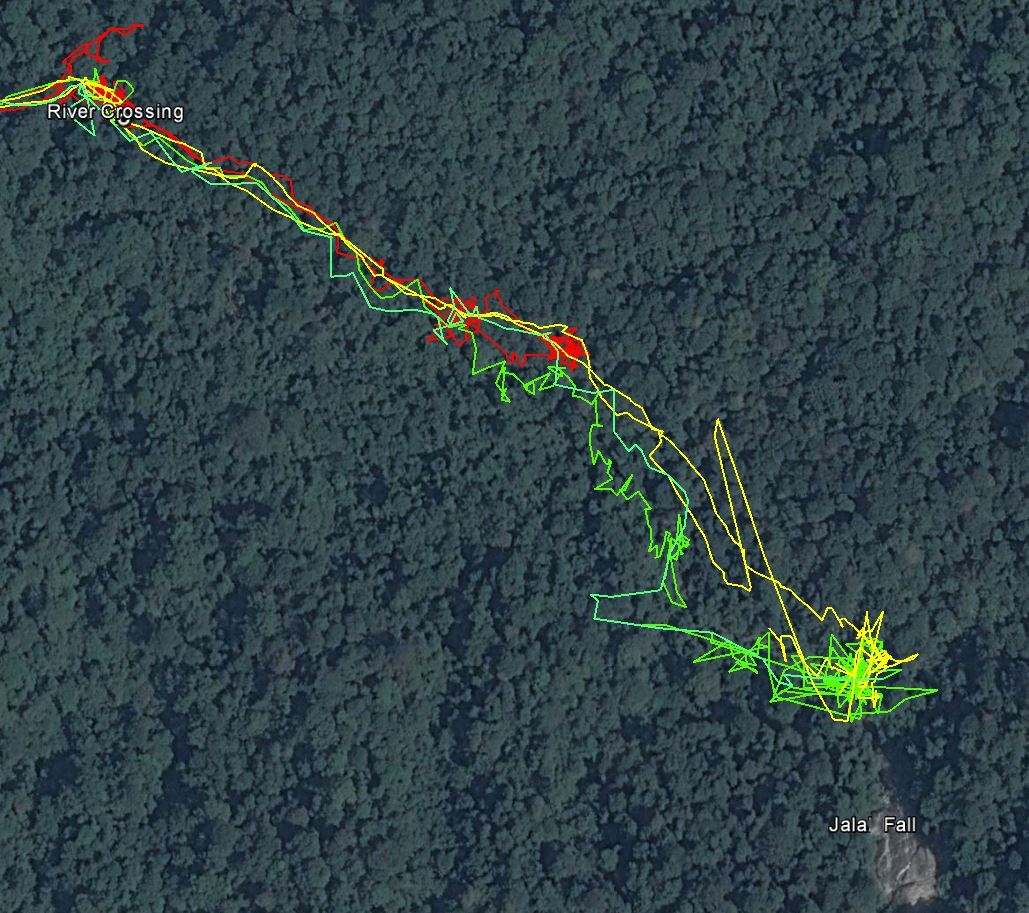 In the meantime it was already 1 pm, we had been hiking for more then 3.5 hours. Basically time enough and the weather was good, but I had promised to be in Parit Baru end of the afternoon. So, reluctantly we decided to go back. 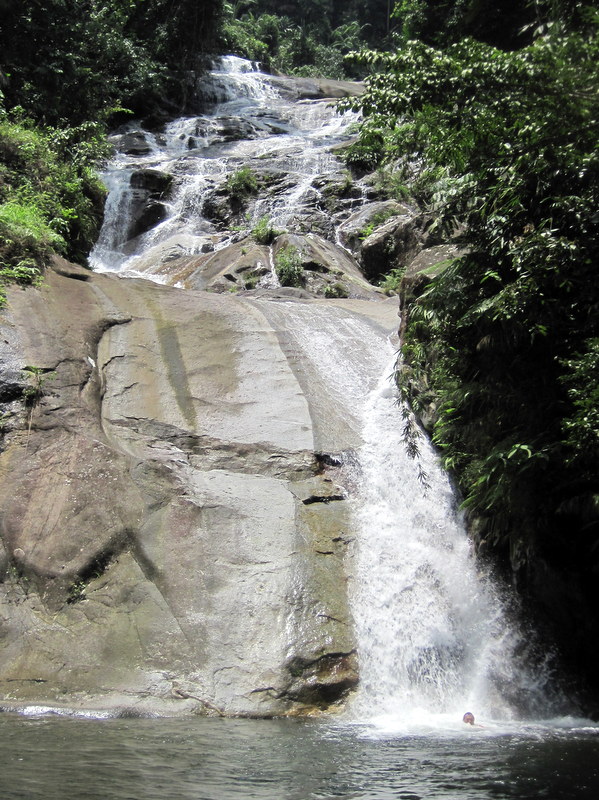 On our way back we stopped for a rest, a bath and our packed lunch at the river crossing. As you can see, we have already accepted our defeat and look happy and relaxed…:-) 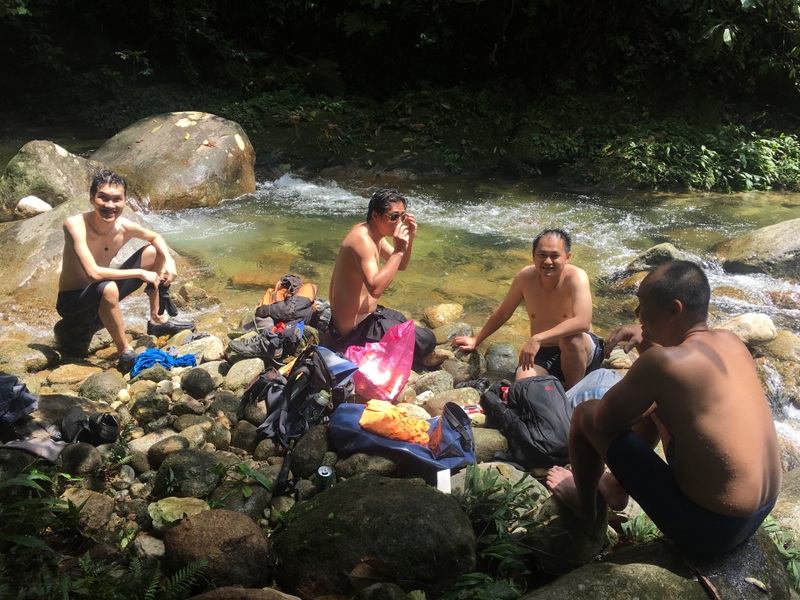 At 3 pm we were back at the car. After collecting my stuff in the hotel and a quick shower, I drove to Parit Baru  where I arrived in time, around 6 pm. Of course I was eager to check my 2010 report, but no need, while still on may way, Siang Hui already sent this whatsapp. 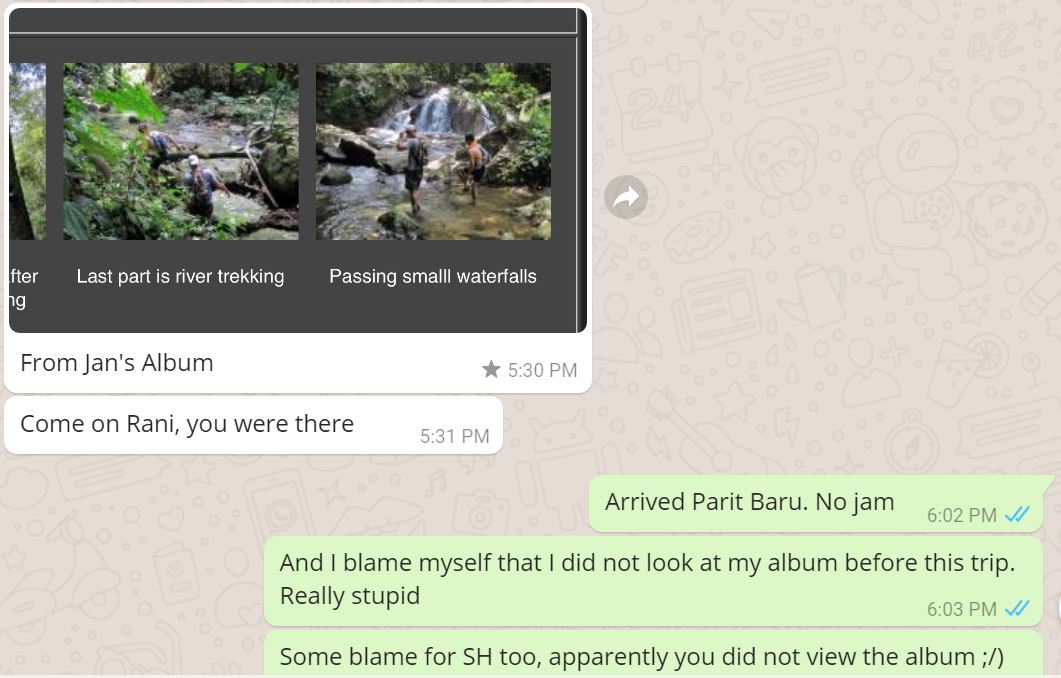 Yes, I blamed myself primarily. Why had I not read my my own report, in preparation for this hike?  Seven years ago I wrote in that report:

Even now I do not understand why I completely forgot about that.

Here are the next few whatsapp exchanges.

In my report I also wrote that there were many leeches. That is correct, I think there were even more this time…:-) 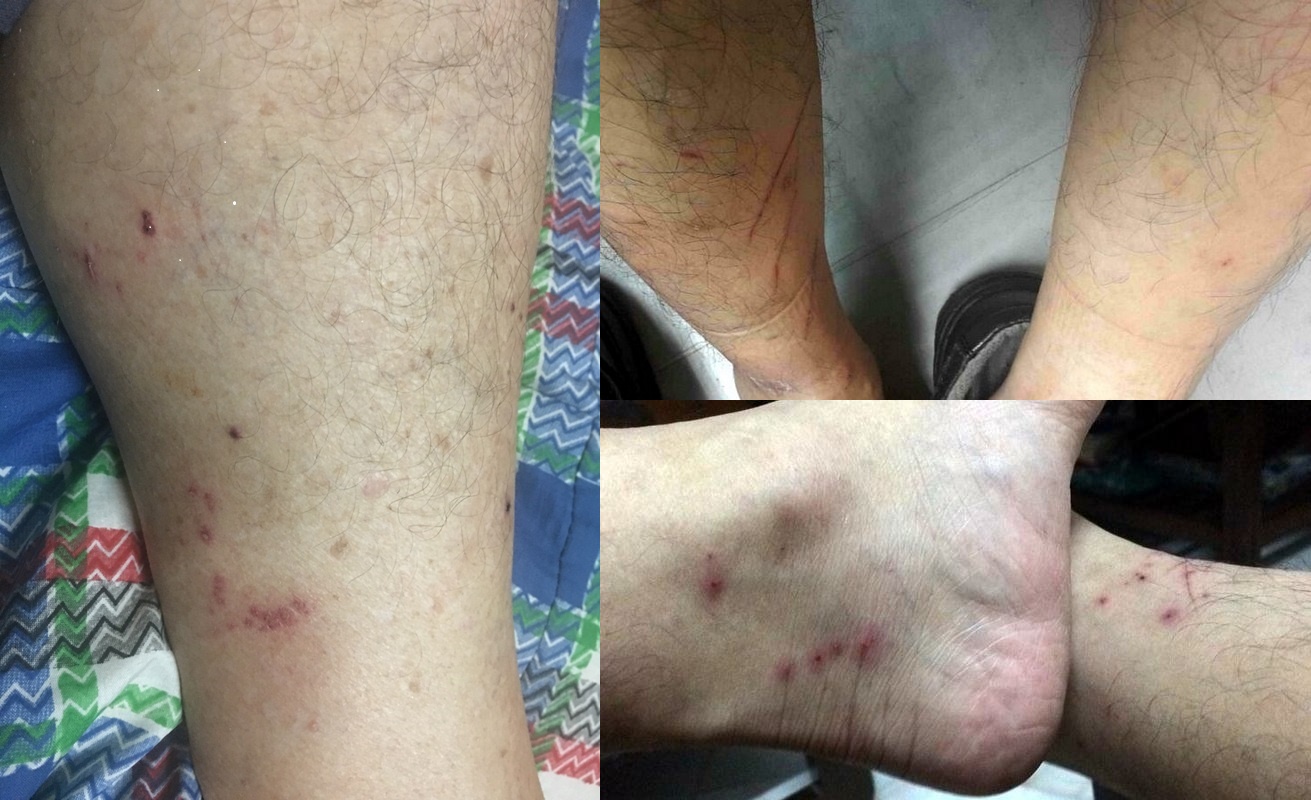 We are seriously considering to go again, and maybe camp one night, so we have more time to explore.