Can you be our tour guide for a day trip to Ipoh and Taiping, my friend Pat asked me recently? My pleasure, I replied, but visiting Ipoh and Taiping on a day trip would be too hectic and no fun. Let me think about an interesting program!

They also would like to visit a waterfall, so I suggested we could start with Lata Kinjang, clearly visible from the North-South Highway. But first we had breakfast in the Pun Chun restaurant in Bidor, famous for its duck noodles. The yam cakes are also delicious. 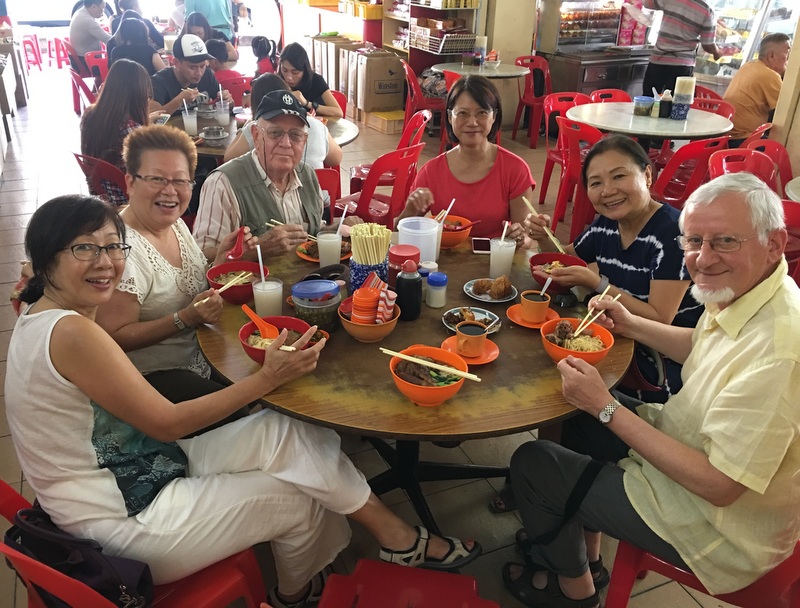 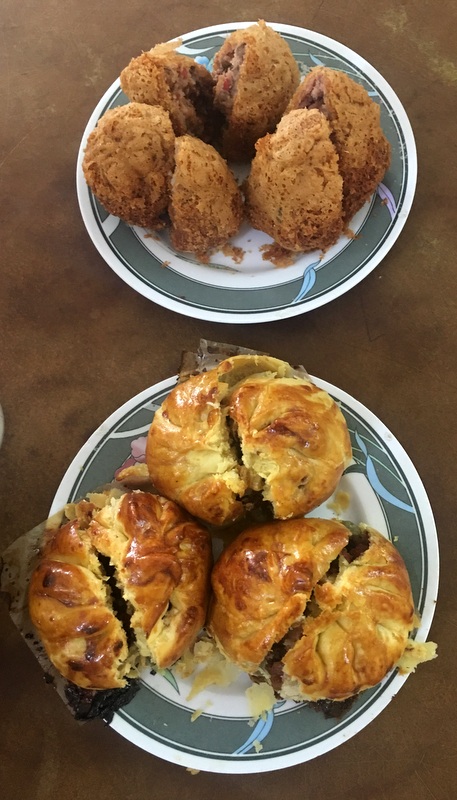 Outside the restaurant there were several stalls with fresh fruits and vegetables, which of course meant shopping! 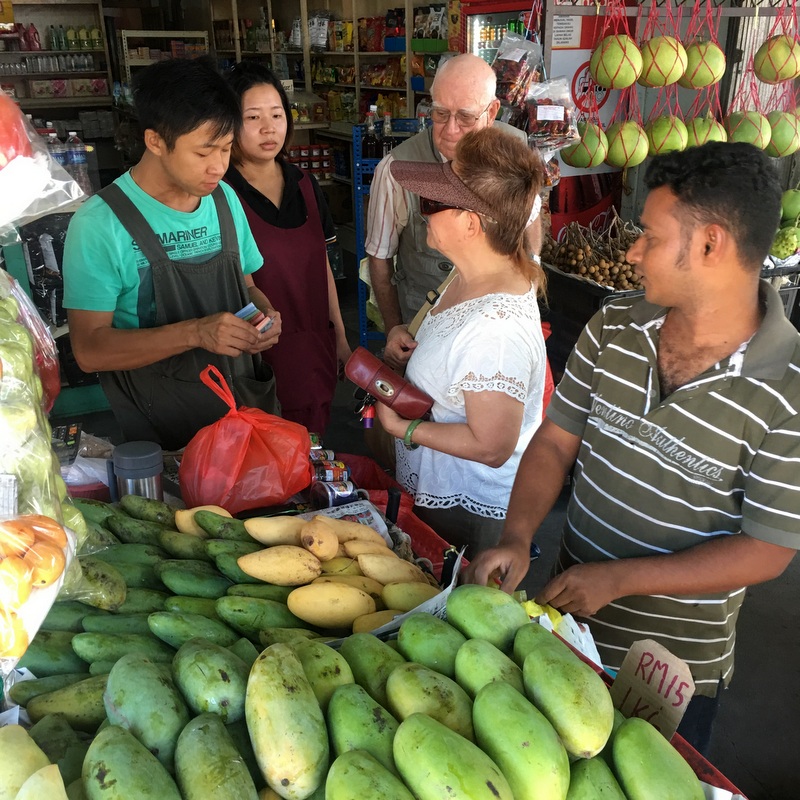 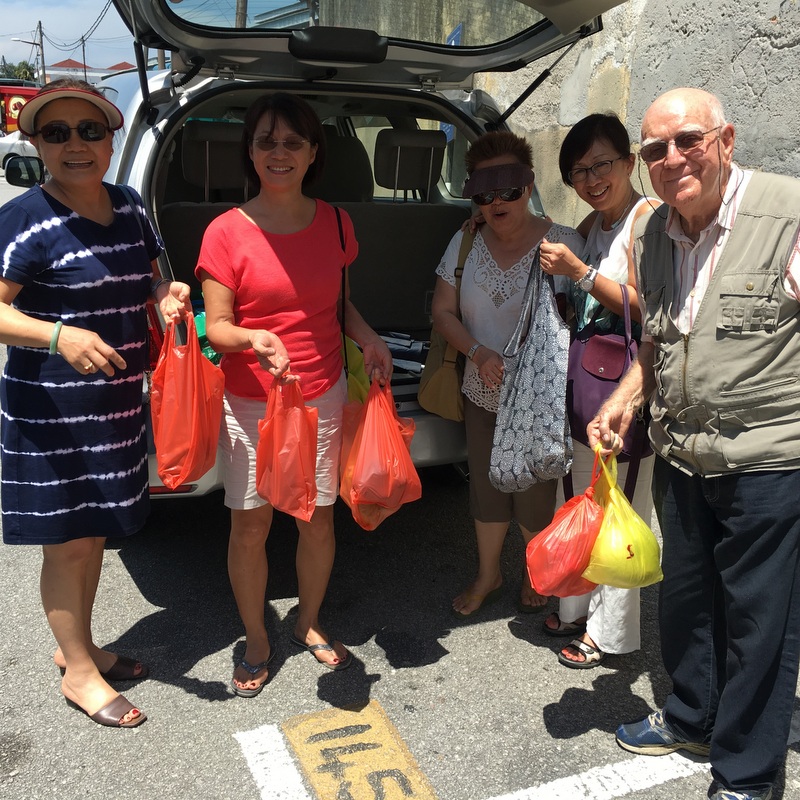 Our next destination was Lata Kinjang. Travelers from KL to Ipoh will have seen this waterfall from the highway, but not many will have actually visited the fall, because the access route is a bit complicated. From the car park it is a short walk through nice forest to the tall waterfall. 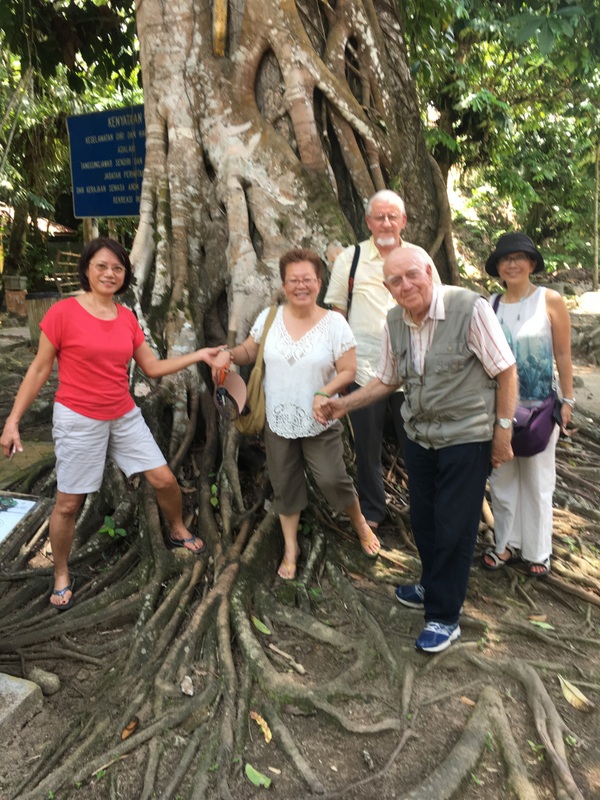 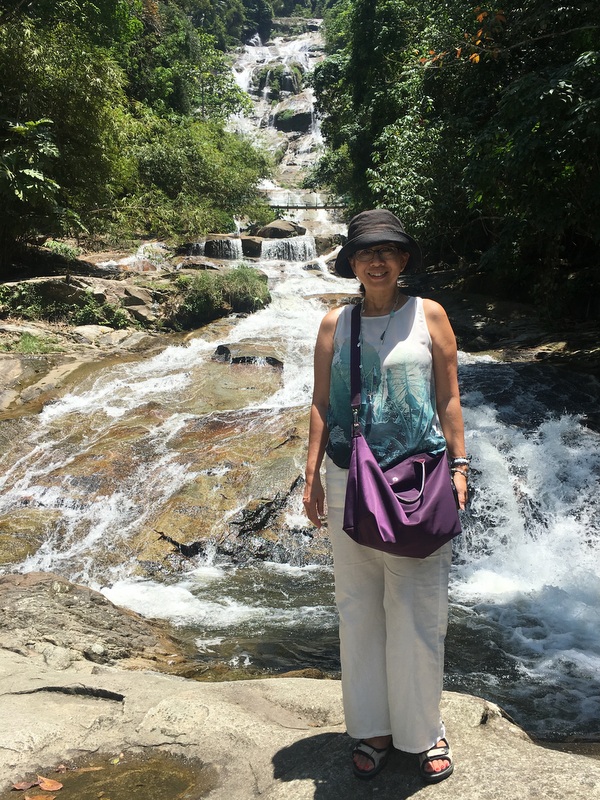 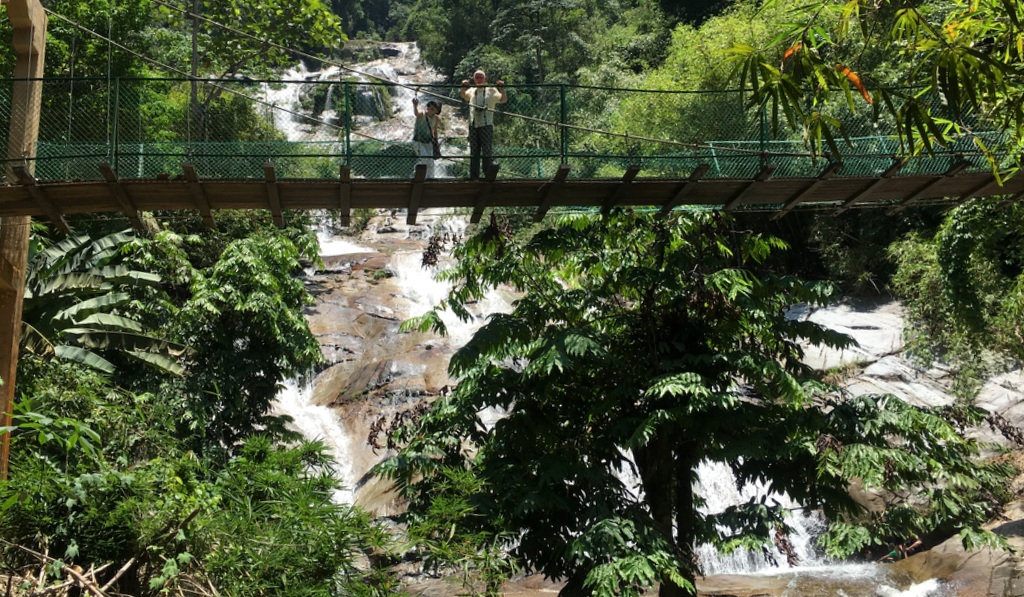 From Lata Kinjang we continued on countryside roads to the tin dredge of Tanjung Tualang. A tin dredge is a kid of floating factory in an artificial lake, created by the dredge itself.. They scoop up buckets of tin-bearing soil at the front end (left pic), separate the tin from the soil and deposit this soil at the rear end (right pic). In the heyday of tin mining there were many of these gargantuan monsters in Perak, now only one is left to become a tourist attraction. During my first visit, many years ago, I could explore the tin dredge, at the moment you can only admire the outside 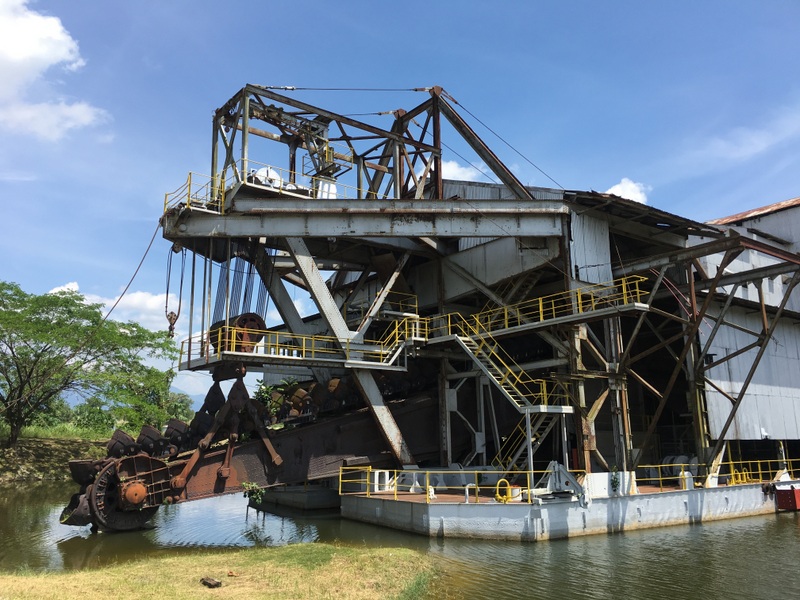 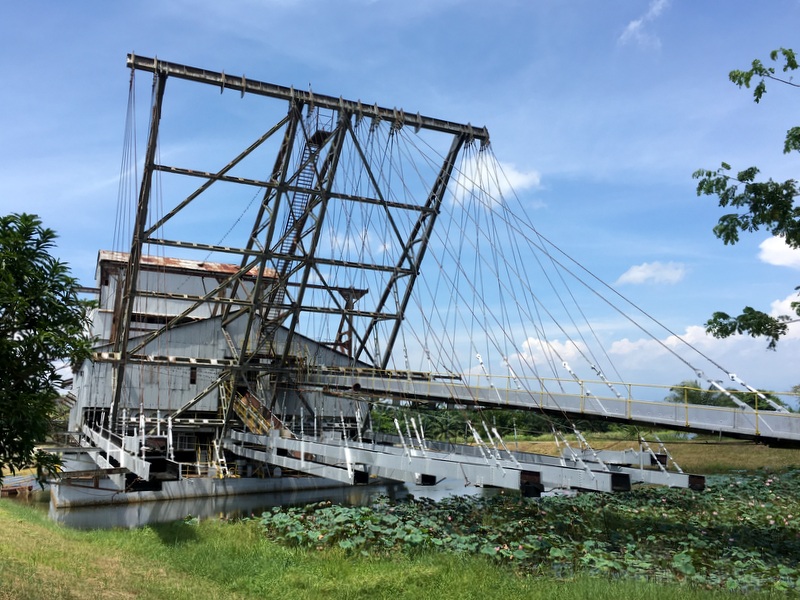 There is also a small museum (under construction) and there are plans to develop the place into a major tourist attraction, including :

“a food and beverage section with cafes, alfresco dining and gift shops; a garden area for weddings and other functions; a petting zoo and adventure park; a villa resort; a floating resort; an area for flea market and antique bazaar; and parking area“

Keep dreaming, I would say…:-)

One of the buckets

Sketch of a tin dredge

Then it was time for lunch. Originally I had planned lunch in Tanjung Tualang, famous for its freshwater prawns, but instead we went to Pusing and had nice food in restaurant Ming Fuong.  With quite affordable freshwater prawns. 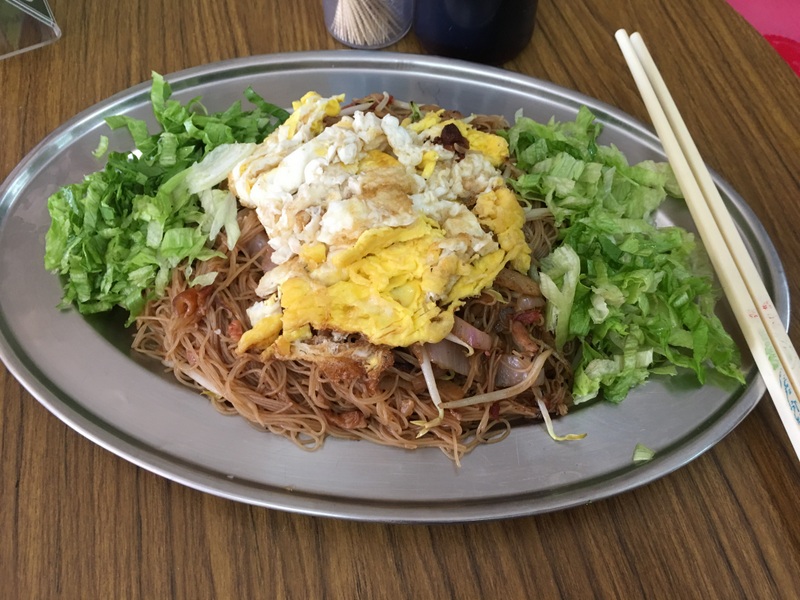 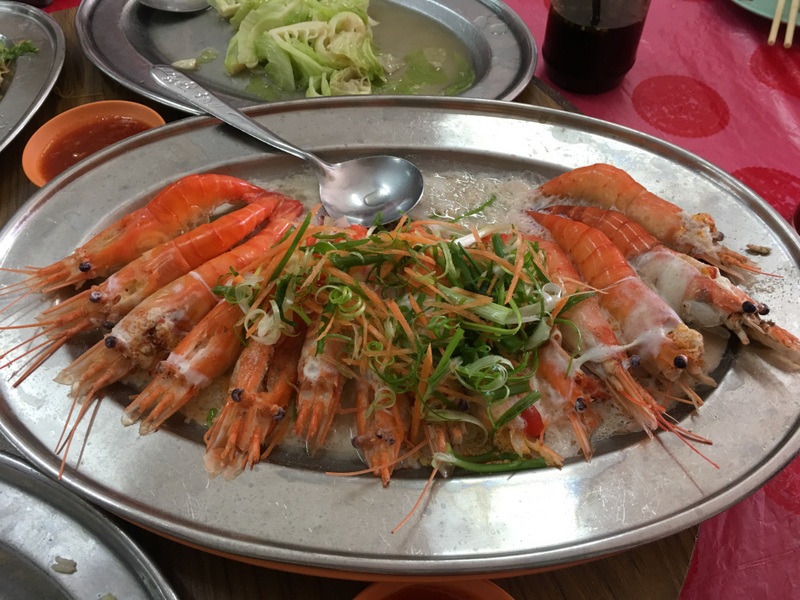 During our lunch I mentioned to my guests the nearby village of Papan, where during the Japanese occupation in WWII, Sybil Kathigasu was helping the resistance fighters. The town is ruined, but there is a small museum in the house where she lived.

We decided to have a look. Papan is only a few streets with many of the houses overgrown with trees and bushes. Difficult to imagine that during the tin mining era it was a busy town. 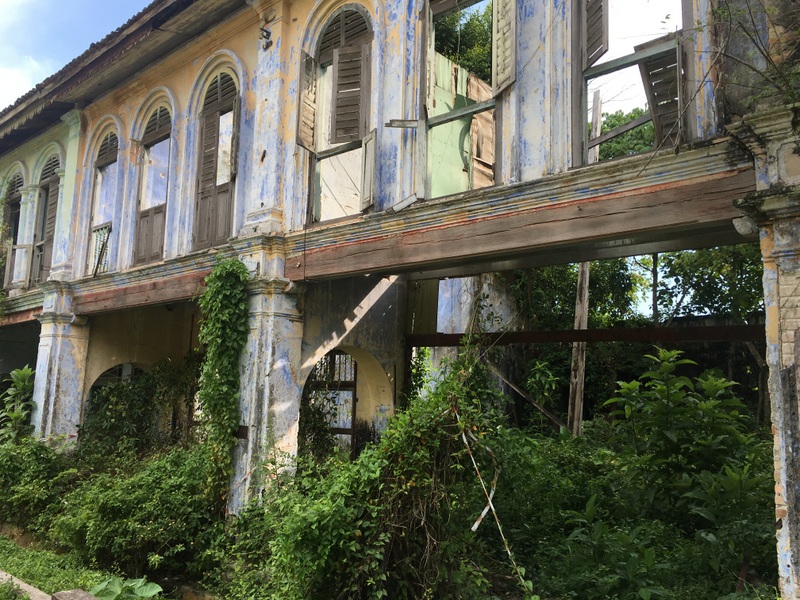 Some of the houses are still inhabited! The museum was closed, we could only have a look from the outside. The future of Papan is uncertain, there are still tin deposits underneath. If the price of tin goes up, it might mean the end of the village 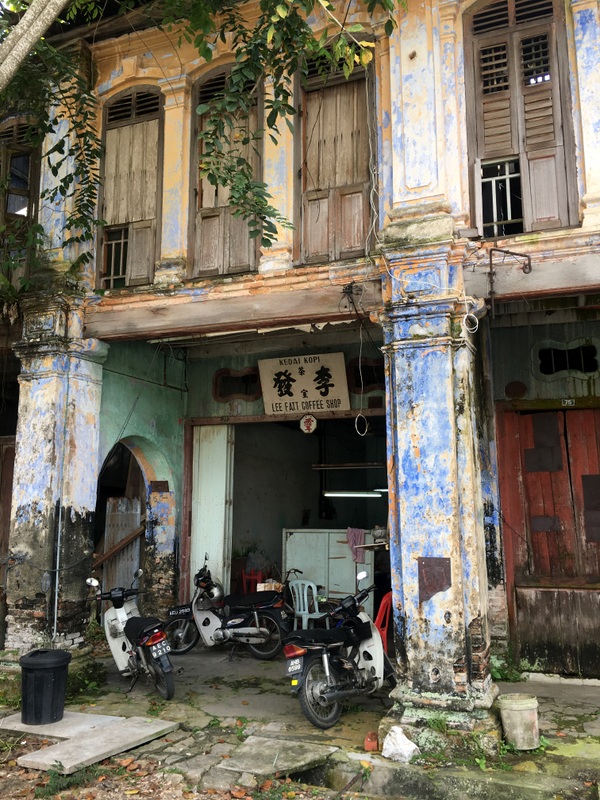 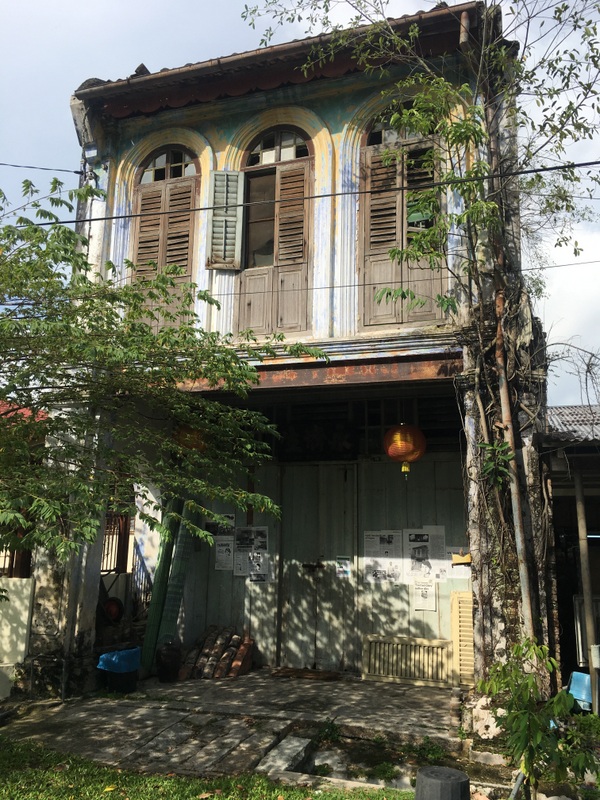 My plan was to visit next one of the many cave temples in Ipoh, and I decided that on our way we could have a quick look at Kellie’s Castle. When I first visited this “folly’ about twenty years ago, it was a romantic ruin, but since then it has been renovated and become a major tourist attraction. William Kellie Smith was a Scottish planter and tin miner who started building this castle in 1915. But he died in 1926 and the castle was never finished. 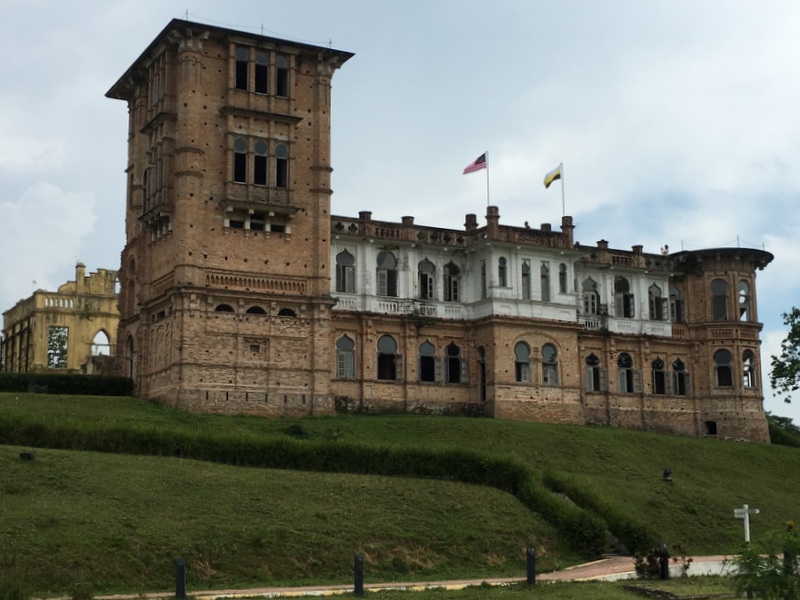 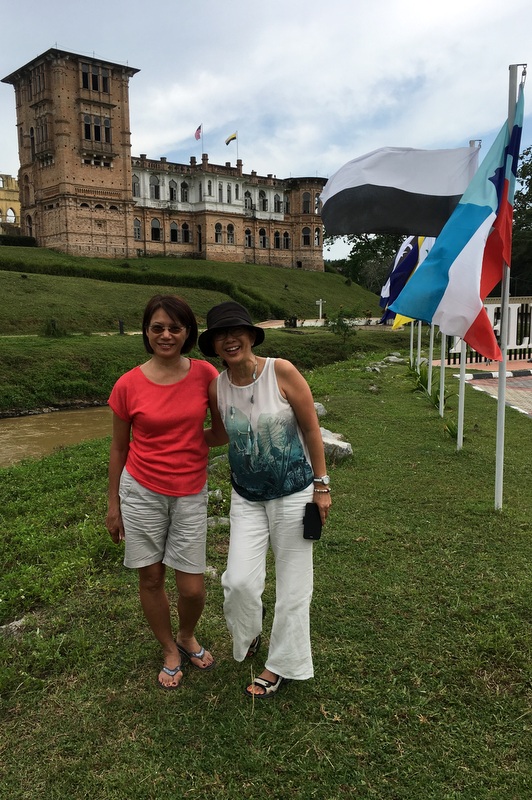 When we arrived at the Kek Lok Tong cave temple, we found out that we were too late, the temple gates were just closing 🙁 Really a pity, because this is in my opinion one of the most impressive cave temples in Ipoh. Click here for a blog report I found on the Internet. 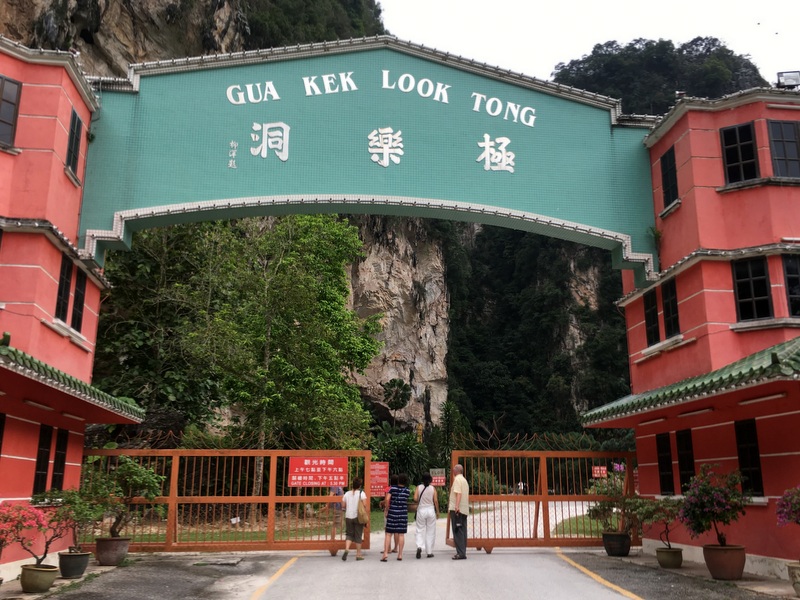 It was still too early for dinner, was there an alternative for the temple? I suggested we could visit Gopeng, another tin mining town with a glorious past. Recently there have been attempts to revive it as a tourist attraction, there is  a museum , and you can find mural paintings, similar to those in Penang and Ipoh. (The links refer to my earlier blogs). It is becoming a bit of a craze nowadays, Kuala Lumpur has been following and you can find this street art also in Taiping.

Some nice ones in Gopeng are in the three-dimensional style of Zacharevic . Here Pat is acting as a model 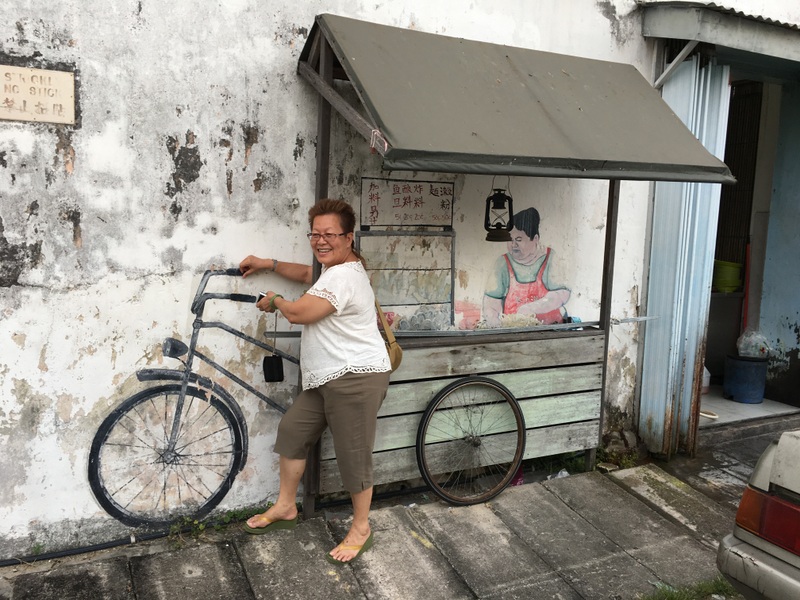 We found a few more, various design and quality

Near Gopeng, in Ulu Geroh, you can find many Rajah Brooke’s butterflies and also, if you are lucky, the famous Rafflesia flowers. Here are two murals depicting them 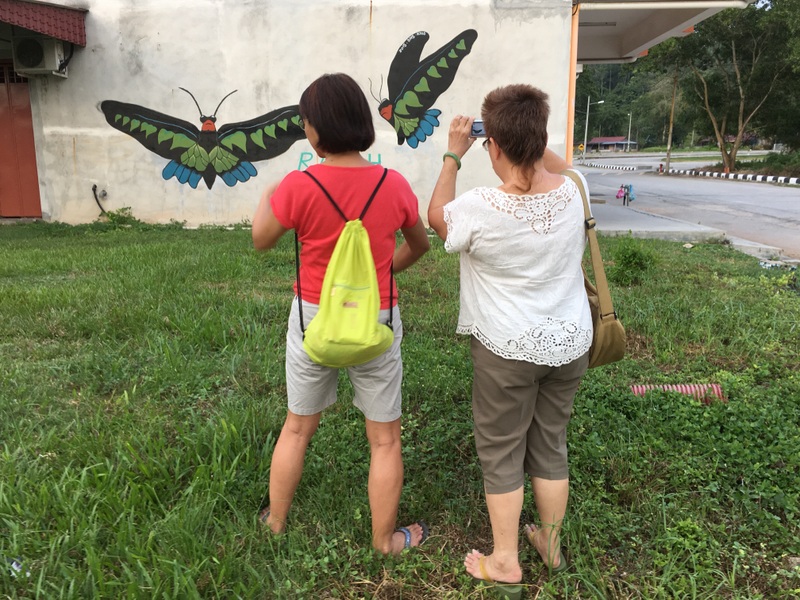 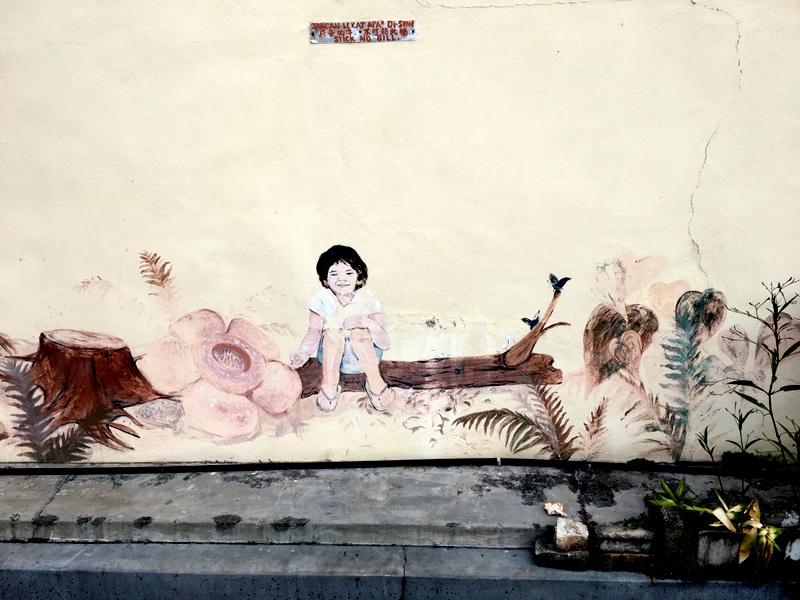 Finally, after a long day, we went for dinner to restaurant Choy Kee in Sungkai. The restaurant is famous for its pork knuckle and the freshwater fish.

My guests wanted also to have again freshwater prawns (udang galah). It was a nice dinner, although we were a bit shocked by the price of the prawns. Below, clockwise from upper left: pork knuckle, kappa (kind of lala), udang galah and fish (forgot which kind). 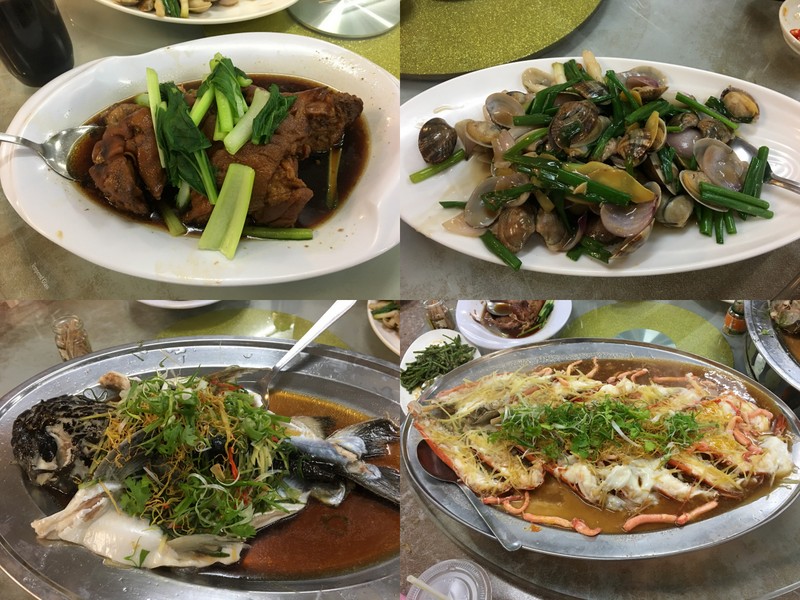 It was a nice trip, full of variety, although we didn’t even reach Ipoh..:-)

Below is our route. The right screenshot shows the pockmarked landscape, a result of the tin mining 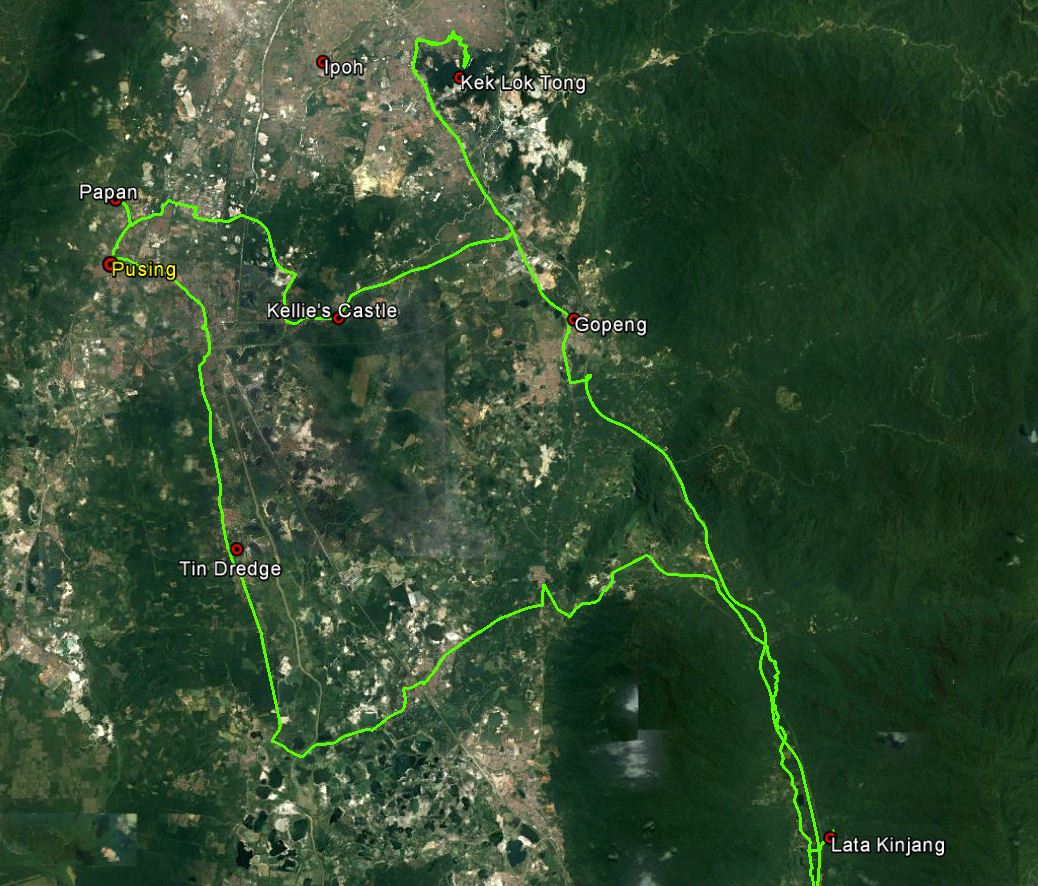 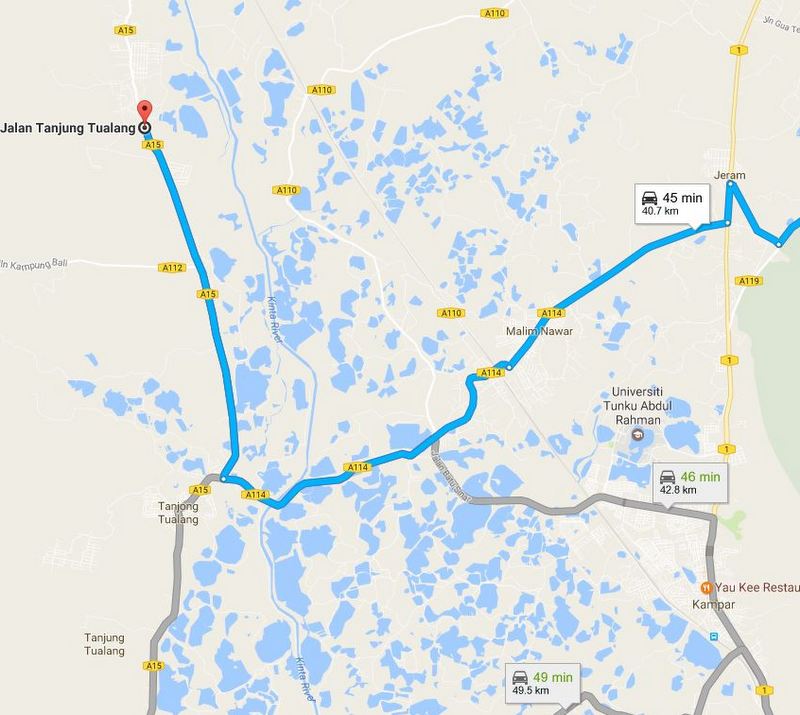