The first time I wrote about the New Horizons spacecraft was in a February 2015 post: Close Encounters. Launched in 2006, its primary destination was Pluto.  During the long voyage it had gone into hibernation (to save energy) and now it had woken up successfully to prepare for the flyby of Pluto in July.

To give you an impression of the size of the spacecraft, this picture is taken in 2005 during preparation for the launch. 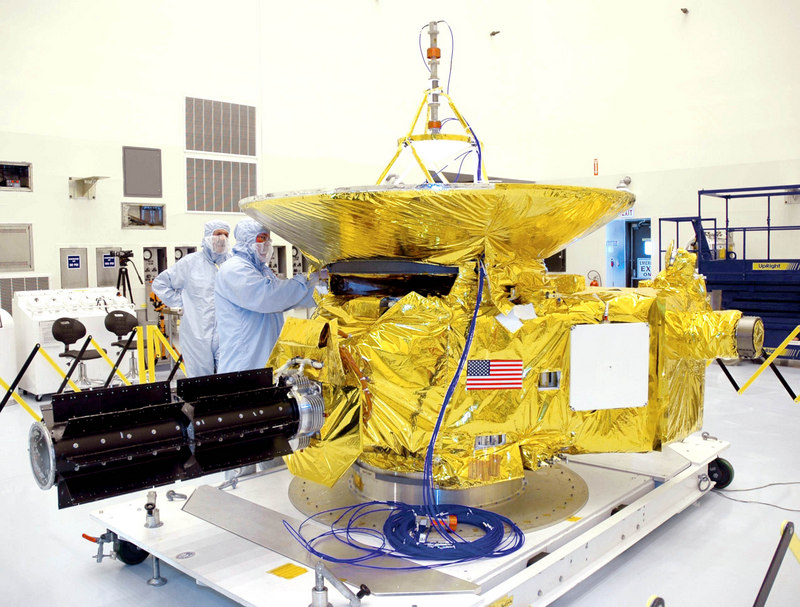 Note the black “tube” to the left, it is the RTG, the power source for the spacecraft.

Solar panels can not be used because of the large distance to the Sun, instead radioactive plutonium is used.

The heat of the radioactive decay is  converted into electricity by thermocouples.

My second post was titled Close encounter with Pluto and published July 2015, a few days after the successful flyby. Here is a picture of Pluto, in high resolution, taken by New Horizons. Although the flyby took only minutes, the transmission of all photos taken, took more than a year, because of the slow bandwidth. Analysis is still going on. 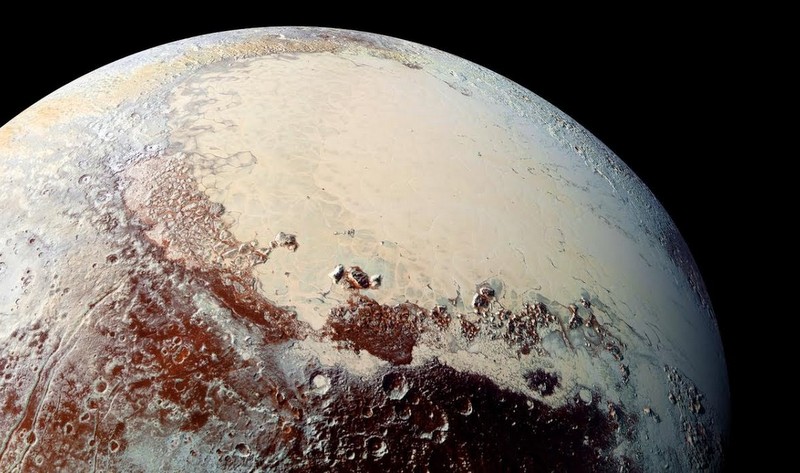 In that post I wrote that New Horizons would try to visit another member of the Kuiper Belt before it left the Solar System. Soon after the Pluto flyby, in August 2015,  it was decided that (486958) 2014 MU69 would be the next destination.

What a name ..:-). Let me explain. The Kuiper Belt is located outside Neptune and contains trillions of objects, remnants of the early solar system. Pluto, once seen as the ninth planet, is now seen as a Kuiper Belt object. The Minor Planet Center keeps track of all the observed Kuiper Belt objects and the present count is 779736 !

The target of New Horizons is minor planet no 486958, discovered by the Hubble Space Telescope in 2014. 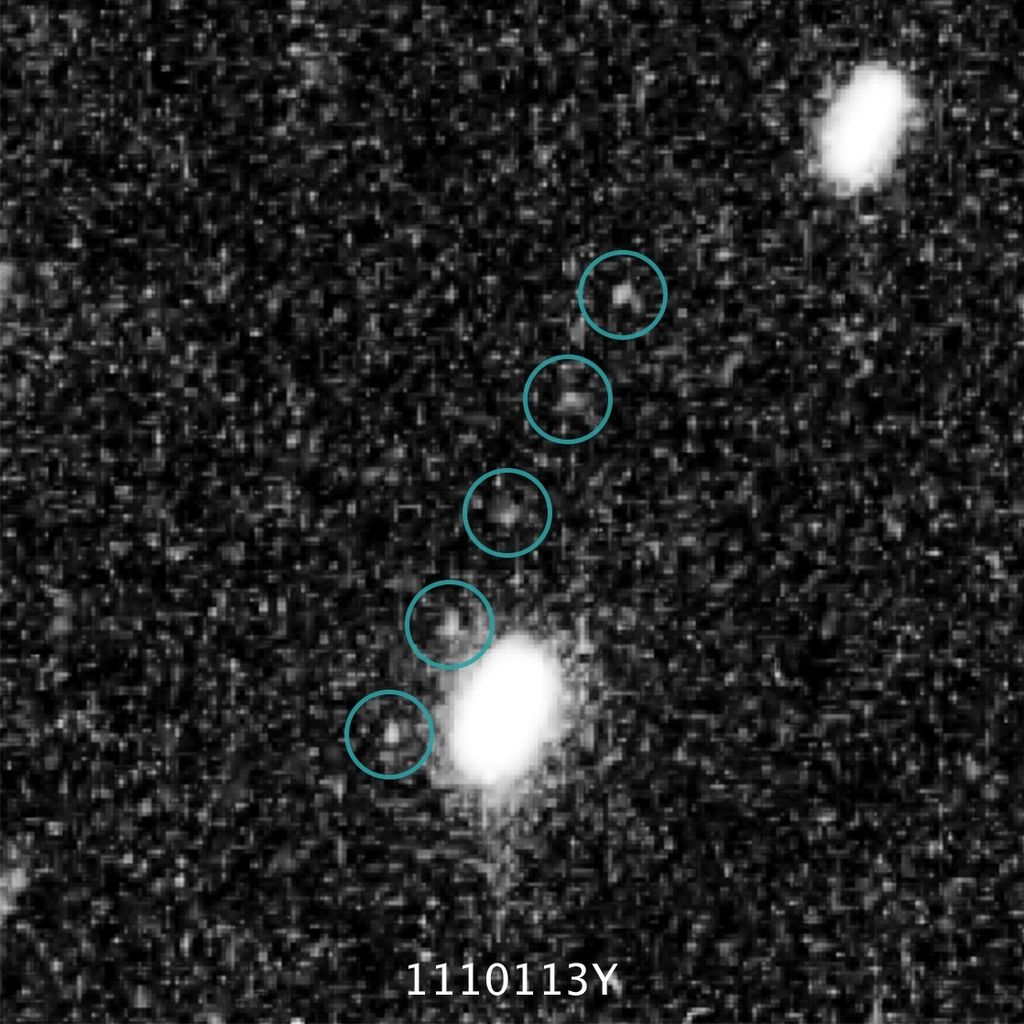 The code  MU69  tells in a complicated way that the object was the 1745th Kuiper Belt object, discovered in the second half of June! Curious about the code?  Have a look at the Wikipedia item about Minor Planet naming.

After a public voting campaign, NASA announced a few months ago that 2014 MU69 would get the nickname Ultima Thule. In classical and medieval literature Ultima Thule got the meaning of any distant place located beyond the “borders of the known world”

First estimate of Ultima Thule’s size, based on distance and brightness, was about 30 km. After it was chosen as the next target of New Horizons, of course many more observations have been made. How to get more information about an object of ~ 30 km, at a distance of more than 6 billion km?

Well, it can happen that Ultima Thule passes in front of a background star! In that case it will block for a short while the light of this star. This is called an occultation. Last year Ultima Thule occulted three different stars in June and July. Such an occultation can only be seen from specific locations on Earth (similar to a solar eclipse).  Here are the three predicted occultation paths.

On 3 June 2017, the NASA scientists tried to observe the “shadow” of Ultima Thule from Argentina and South Africa, but detected nothing. It turned out later that the predicted occultation path was not accurate enough, so the telescopes had been placed in the wrong location..

The second occultation took place over the ocean, therefore the airborne telescope SOFIA was used, flying along the predicted occultation path. 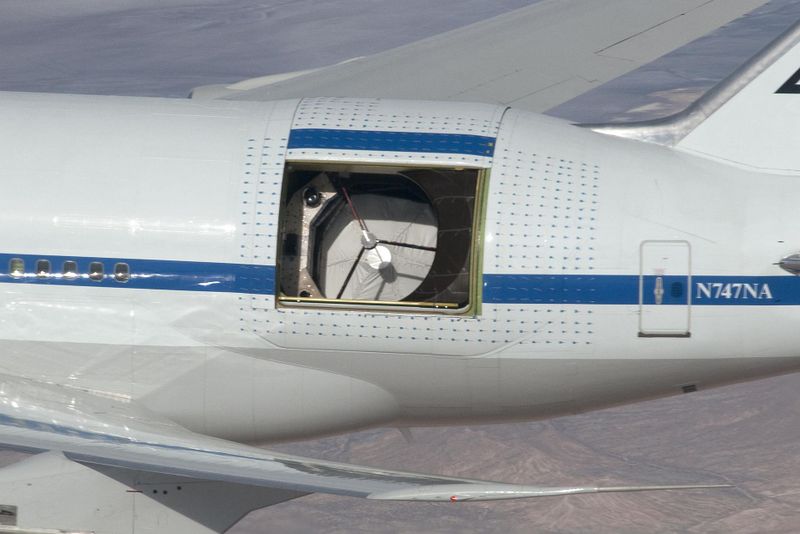 Main purpose was to check for hazardous material around Ultima Thule, which could endanger the fly-bye of New Horizons.

First they thought that they had missed the shadow, but later analysis showed that there had been a short dip from the central shadow

The third attempt was very successful. 25 telescopes were placed along the occultation path in South Argentina and five of them observed the dip.

Here is an example. It is an animated gif, time between the frames is 0.2 seconds.

Watch the star in the centre and notice how it “disappears” for a short while!

Careful analysis of the “dip” gives a lot more information. Ultima Thule might be actually a contact binary, with a very elongated shape.

More information about this amazing scientific exploration can be found in this  NY Times article.

Here is an artist impression of Ultima Thule. The Sun is not more than a very bright star, you can see how New Horizons is approaching… 🙂   To the  left you see a “moonlet” orbiting Ultima Thule, for a while the scientists thought there could be one, but it is now disputed. 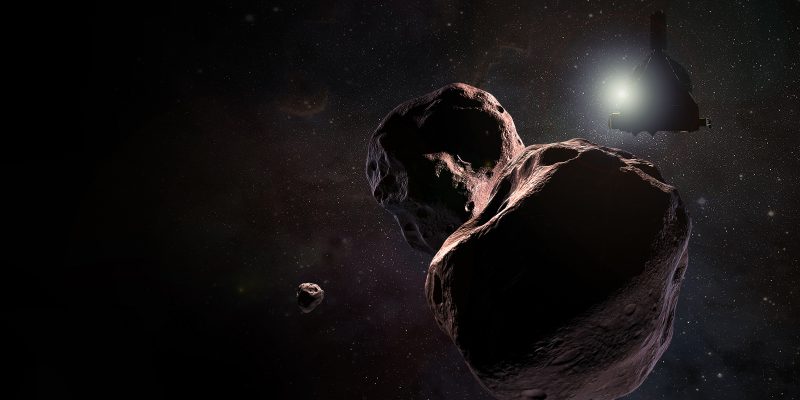 New Horizons has woken up from its hibernation last month and is healthy. The coming months preparations will be made for the encounter.

It will be exciting to see how Ultima Thule looks in the real. But it will take time to transmit pictures back to Earth.  It takes almost six hours for data to bridge the distance between New Horizons and Earth!