Gunung Rapat is a limestone hill, south of Ipoh. When you drive the no 1 trunk road from KL to Ipoh, you will pass  a number of Chinese temples, built in the limestone caves of Gunung Rapat. One or two I must have visited in the past and several times I have been to the Kek Lok Tong temple, on the other side of the hill.

Searching the Internet I found 8 major temples on the slopes of Gunung Rapat and I decided to make it a project to visit all of them during a visit of Ipoh. Here are the results. In the Google Earth screenshot below, the locations of the eight temples are given. 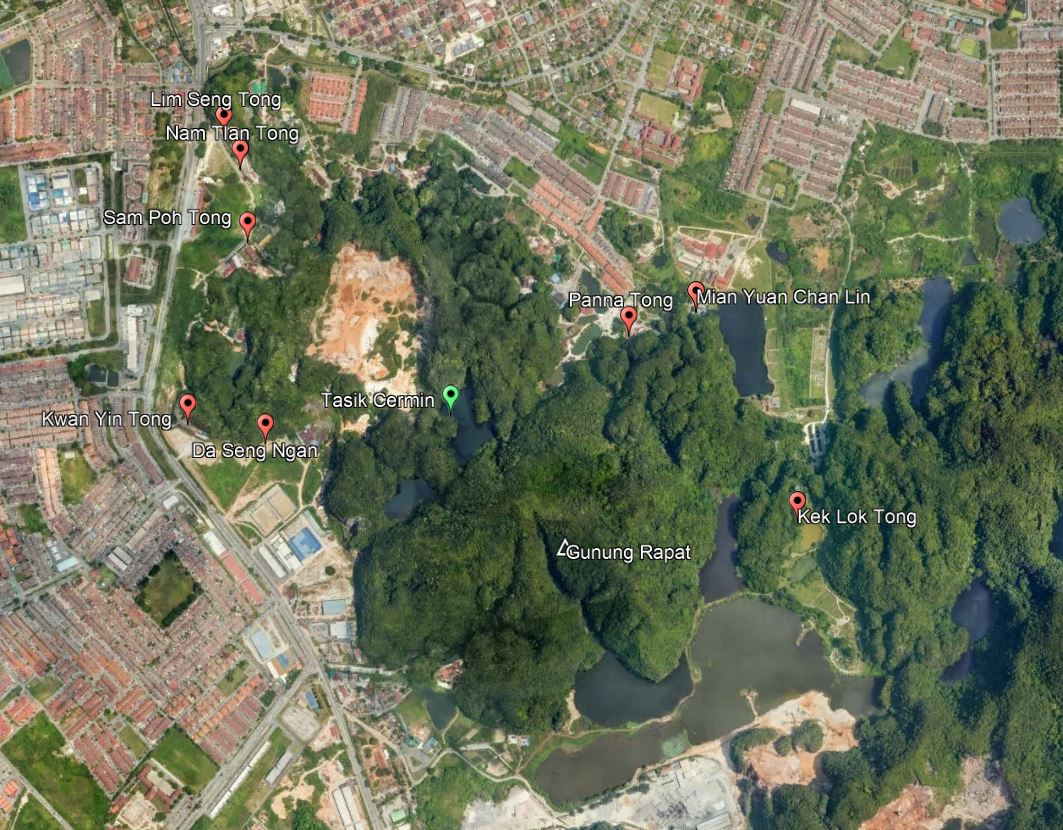 We started our trip with a visit of Tasik Cermin, the Mirror Lake. Until not long ago this was a “secret” location, known only to a few people. The lake is located within a quarry and can only be reached through a tunnel. Access was not always allowed by the quarry owner. This time it looked like quarry operations had stopped, there was no entrance barrier and we were told that the lake is nowadays becoming popular for wedding shoots!

If there is no wind, the water is really like a mirror, but during our visit there was a breeze. Aric tried to operate his drone, but between the steep cliff walls, GPS reception was not good enough.

Our first temple. When we visited Tasik Cermin in January 2017 (read my blog here), we noticed that there was a cave temple nearby. We visited it and the caretaker told us that the temple is quite old but has been covered by a landslide for many decades, and was only rediscovered in 2006! Restoration has now been almost completed. To get funding, devotees can “sponsor” statues of the Amitabha Buddha. For more information, click here . 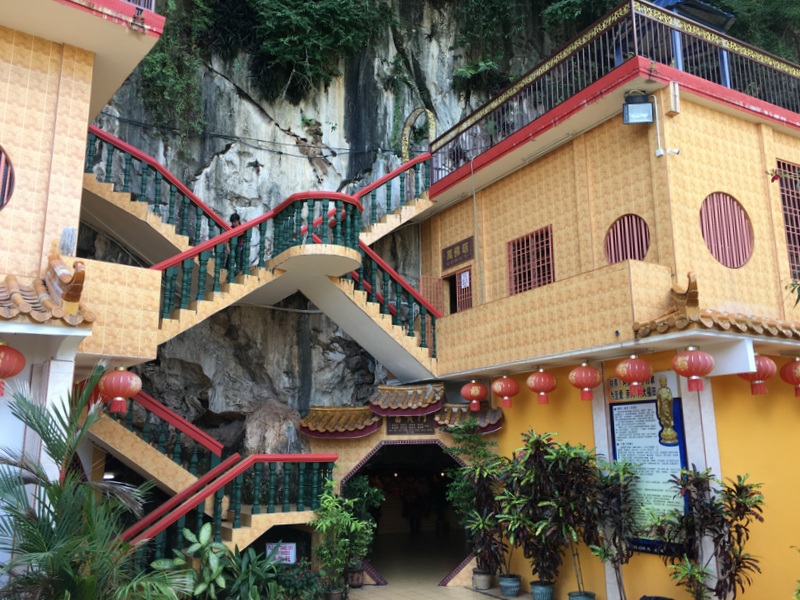 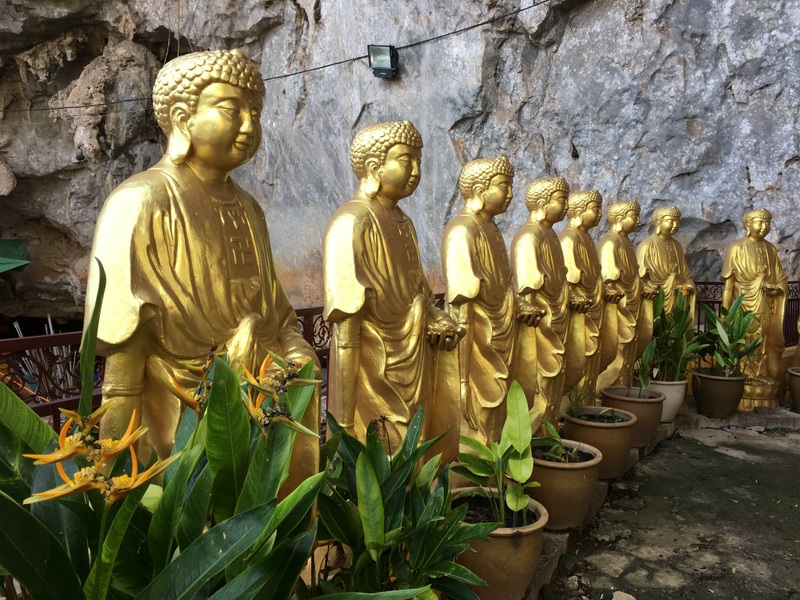 You can sponsor these Buddhas

From this temple you can actually walk to the Kwan Yin Tong temple nearby, but we were by car, had to u-turn twice on the busy trunk road, which made it more efficient to first visit the Ling Sen Tong temple.

There are three temples along the trunk road next to each other, when you leave Ipoh. Lin Seng Tong is the first one, and that might be the reason that it is quite touristy and gaudy. A bit too touristy, we did not spend much time there 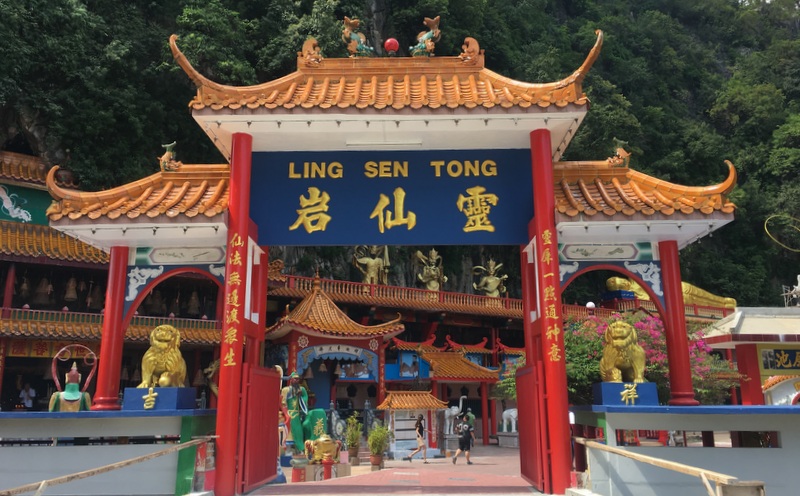 The Goddess of Mercy

The second one, next to Lin Seng Tong. A 19th-century Taoist cave temple with colorful shrines. 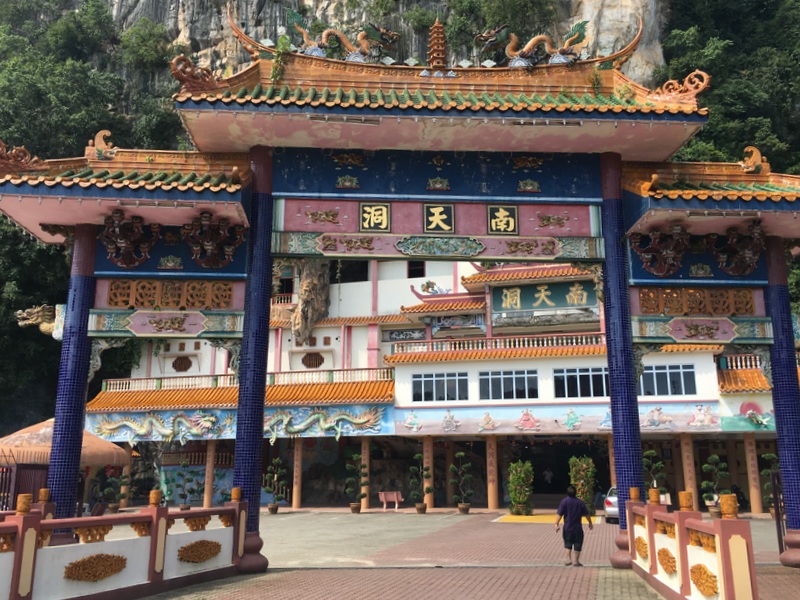 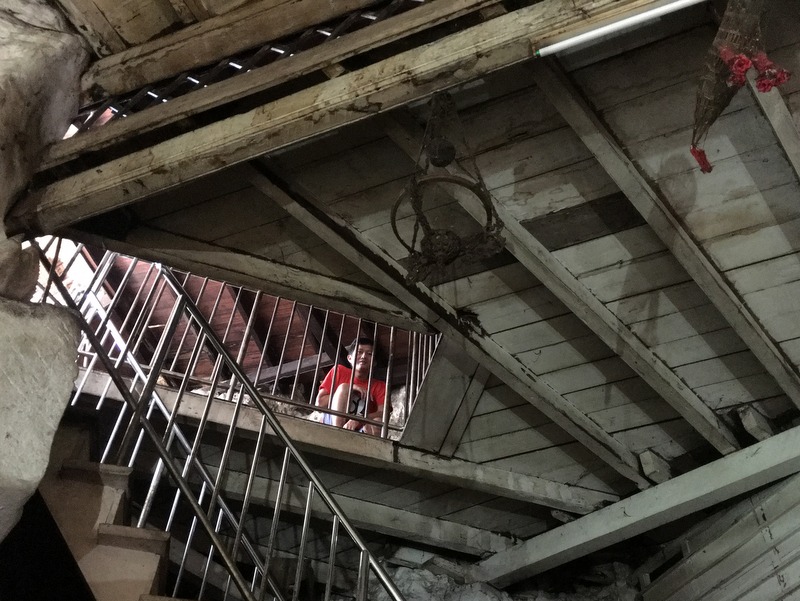 We explored the elaborate network of steep, dark stairs. Interesting, but a bit rundown

The third temple is Sam Poh Tong, but it was closed when we arrived there in the afternoon. It even looked closed indefinitely, we continued to the Kwan Yin Tong temple 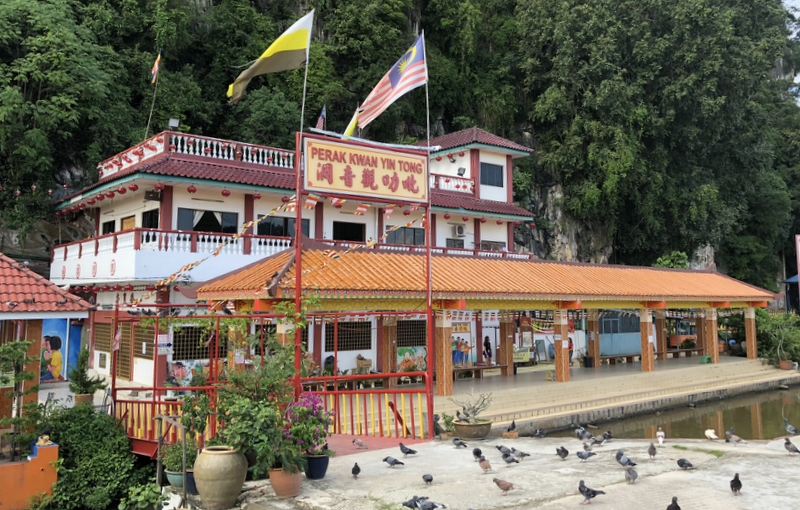 Then it was time for food, always an important aspect of our trips 🙂  For dinner we went to a food court, where we ordered deep-fried Mantis prawns, sotong with kangkung, popiah and teochew kueh, everything nice, but way too much..  Breakfast next morning at Chooi Yue, one of the famous dim sum restaurants in Ipoh. Good quality dim sum, many varieties.

Unfortunately it was raining heavily the next day, a real downpour. Before continuing our temple tour, our Ipoh friend took us first to another “mirror lake” location, a former tin mining pond at the Iskandar Polo Club. Attractive scenery. 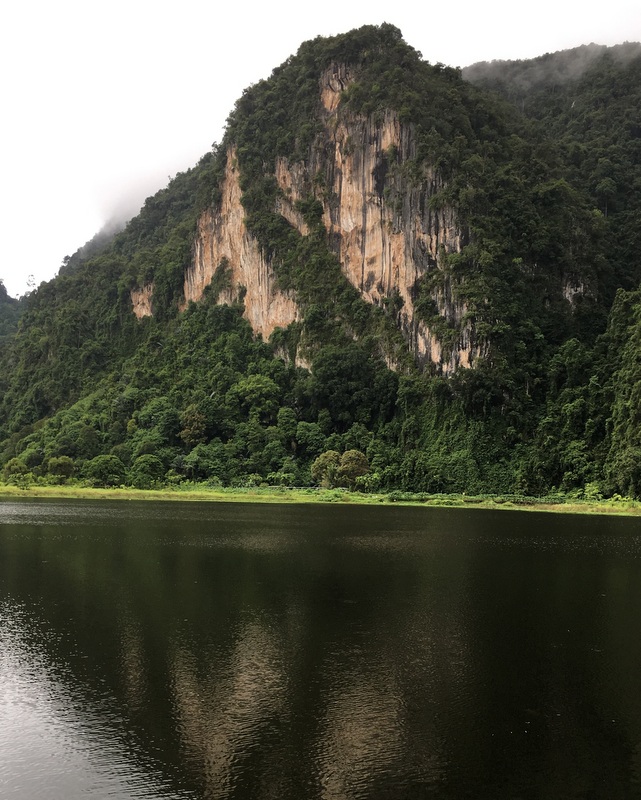 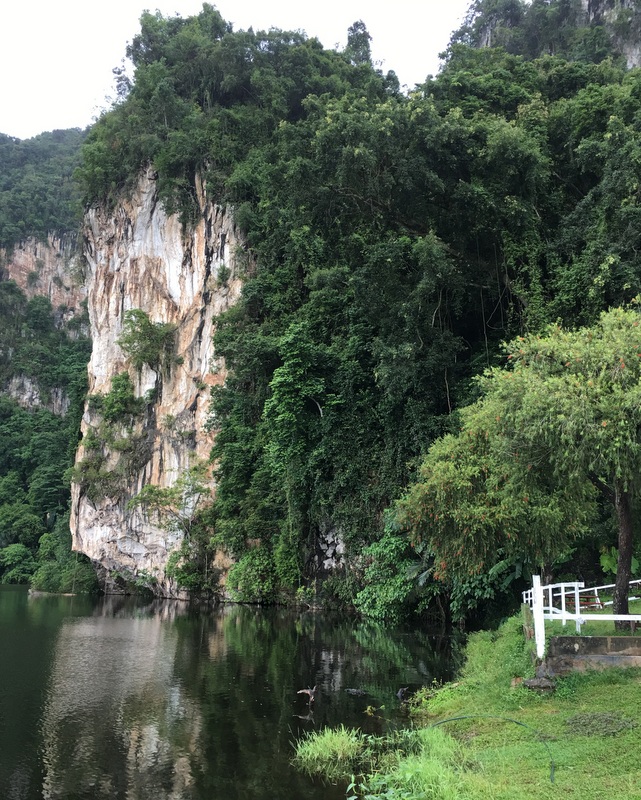 We started with the Kek Lok Tong temple, the most beautiful of the Gunung Rapat cave temples, in my opinion. In the 1920’s it was already a place of worship. In the 1960’s it became part of an iron mining site, the entrance to the cave was widened to allow lorry access.  When mining ceased it was dedicated again to religious purposes and opened to visitors in the 1970s.

Interesting feature of this temple is that after entering and crossing the cave, you will exit to a beautiful garden. Because of the heavy downpour we could not visit the garden this time. Here you see the laughing Buddha, contemplating the view of this garden. 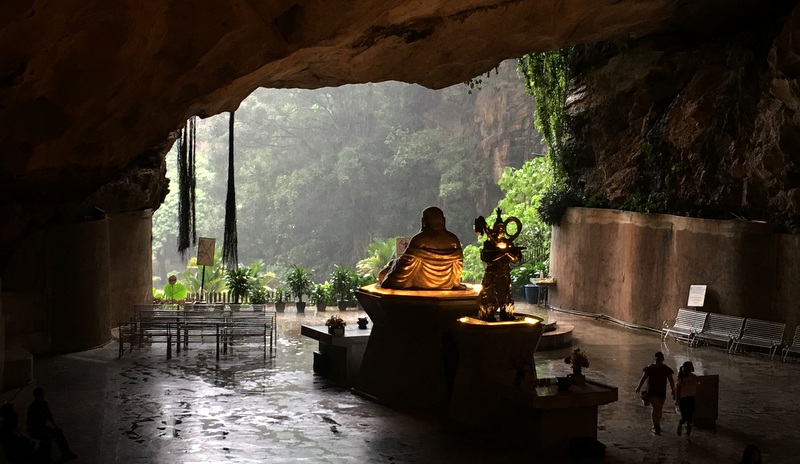 Searching the Internet, I had found two more temples on the North side of Gunung Rapat

The first one, Panna Tong, was closed, so only a photo of the exterior. By the way, tong means cave in Chinese language

The second one was a pleasant surprise. It is a Thai style Buddhist temple and relatively unknown, compared to the popular, more touristy  temples on the West side of Gunung Rapat. Nice environment, very scenic.

When I play tour guide again for my friends, I will include this temple in the itinerary! 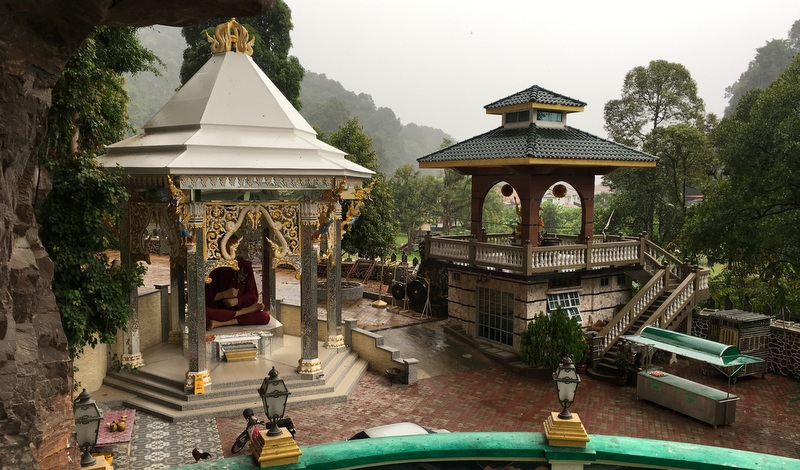 Before finishing our temple trip, we decided to go back to Sam Poh Tong, because I had checked on the Internet that the temple was not closed forever. And indeed, now it was open, we were told that the day before they had closed early because there were no visitors!

It is quite a large temple complex, but as it was still raining, we did not explore everything. We had a look at the famous turtle pond and bought some kangkung to feed the turtles. But we did not enter the gardens, because of the rain. Will have to come back here. 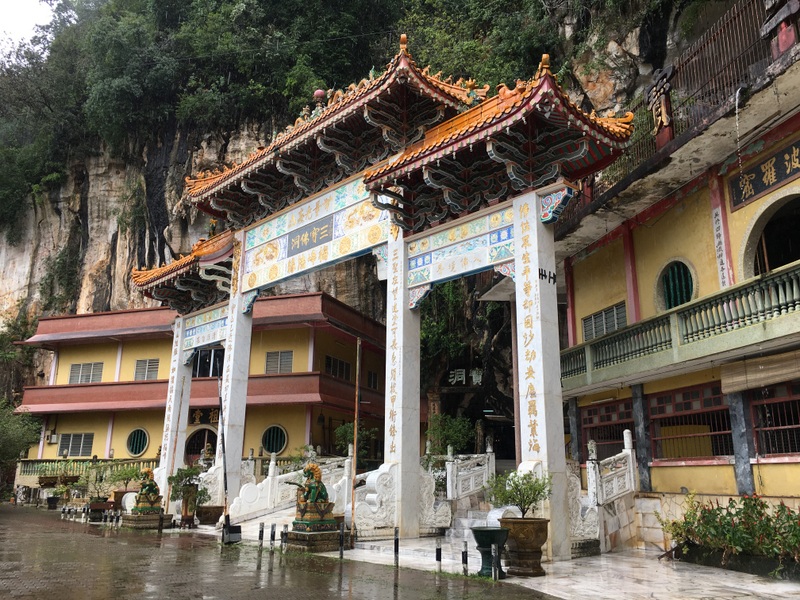 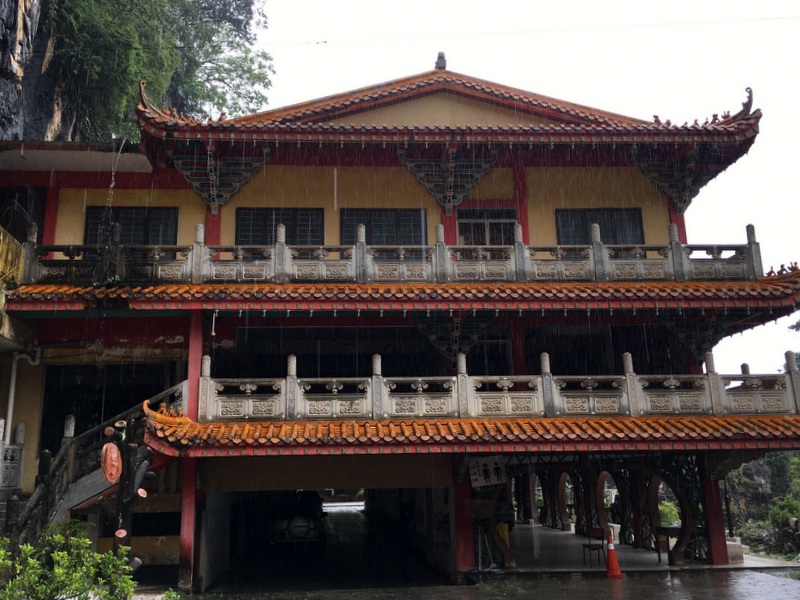 In the afternoon I continued to Taiping, but that will be another post.

My friend David May has written informative web pages about many of the Ipoh cave temples, for example this one about Da Seng Ngan, with references to other temples.