Landing a spacecraft on the planet Mars is not a piece of cake!

After several failed attempts the first successful landing took place in 1976, when two(!) spacecrafts, the Viking 1 and 2, landed safely on the surface of the Red Planet. And a Red Planet it was. Here are the first (color) pictures taken, left by the Viking 1, right by the Viking 2 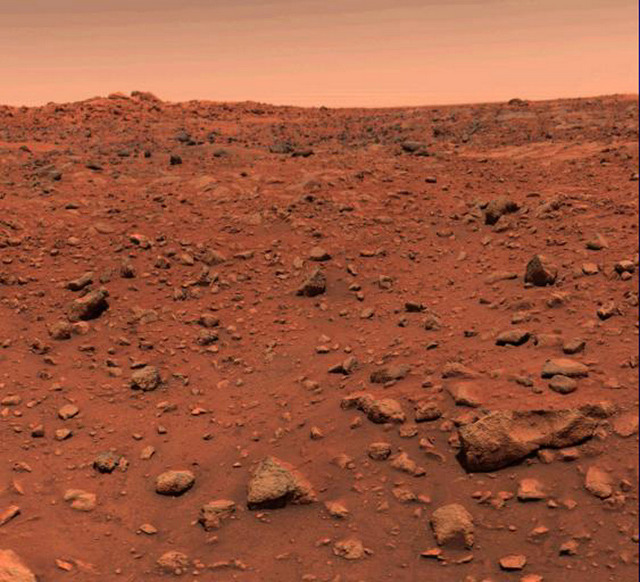 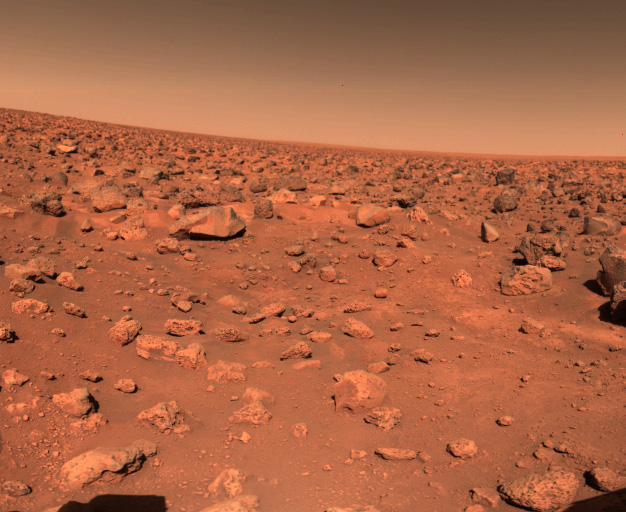 The next successful landing was more than 20 years later, the Mars Pathfinder in 1997. The lander contained a small separate vehicle, a Mars rover, that could independently explore the surface. Here you see the Sojourner, after it had just rolled down from the Pathfinder. It is a tiny vehicle of 63 x 48 x 28 cm and with a mass of about 12 kg. 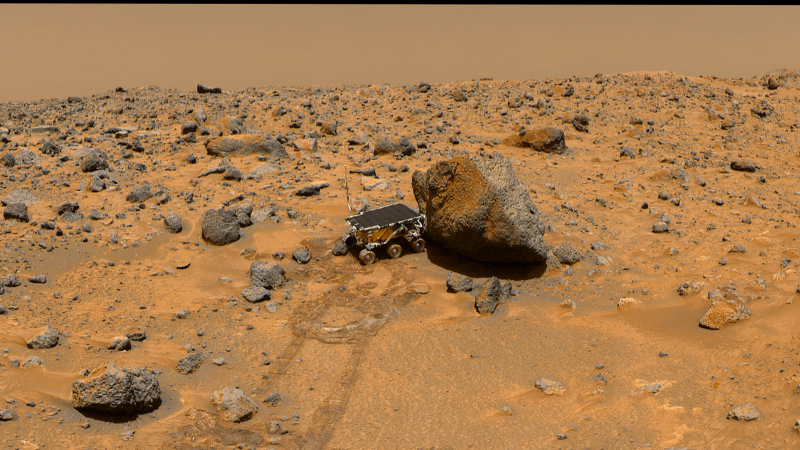 The next mission was the Mars Exploration Rover in 2004. Two separate missions actually, landing two rovers on Mars, the Spirit and the Opportunity. Both missions were very successful, the two rovers were planned to operate for 90 Sol’s (a Sol is a Martian solar day), but Spirit remained active until 2010 and Opportunity until June this year. Actually they are still trying to contact Opportunity, hoping it survived the huge dust storm that raged on Mars this year. Check this update for the latest info. 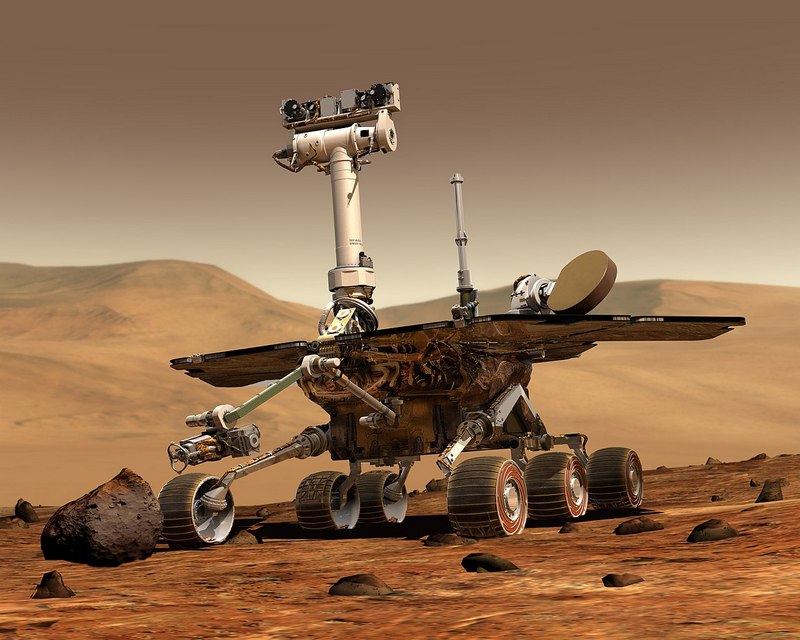 Four years later, in 2008, the Phoenix landed on Mars, for the first time a landing in the polar region. It confirmed the existence of water ice on Mars. Here is an artist impression of the Phoenix landing. Mass about 350 kg 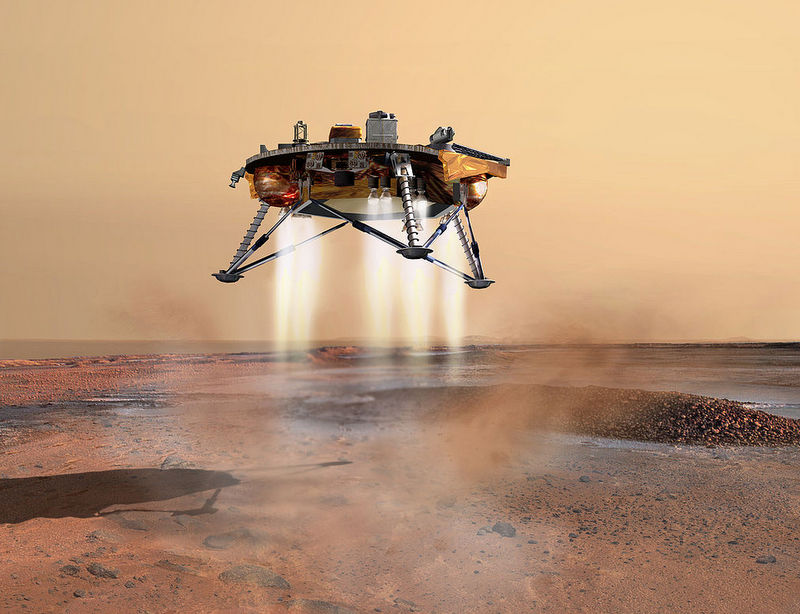 This photo shows the difference in size. In the foreground the Sojourner, left the Opportunity and right the Curiosity. 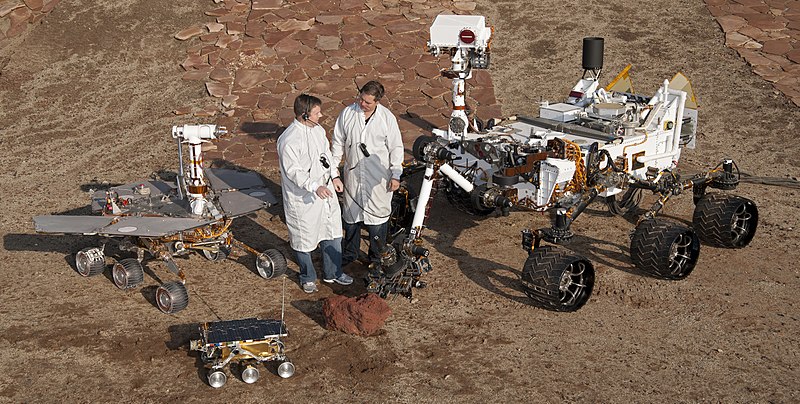 The last successful landing took place two weeks ago, 26 November 2018, when the InSight lander touched the surface of Mars. Diameter of the lander 1.5 m (without its solar panels), mass 360 kg.

Main mission is to get more information about the interior of the planet. A seismometer will record “marsquakes” and a “drill”  designed to burrow as deep as 5 m, will measure the heat flow from the interior. Here is an artist impression of the lander with the solar panels deployed. Foreground left the seismometer, right the drill. 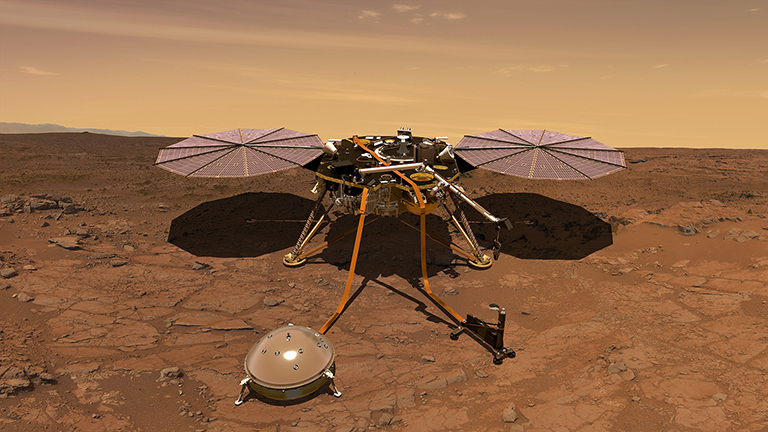 Here is a map of Mars with the location of the eight successful landings. 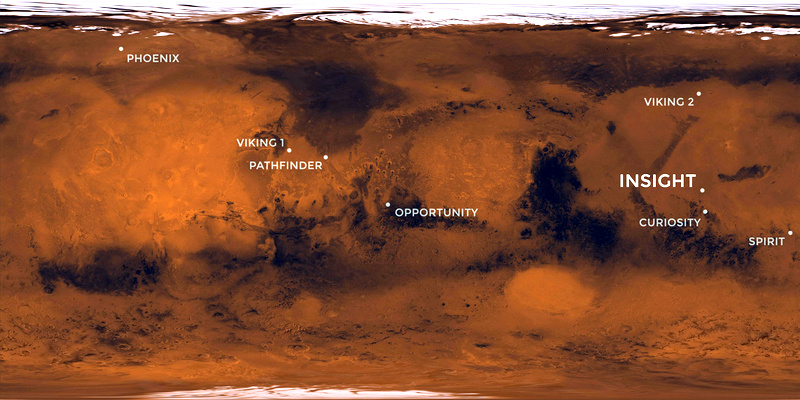 More than half of all missions failed, for example the Beagle 2 in 2003 and the Schiaparelli in 2016.  For a full report , see the Wikipedia article Mars Landing.

Why is landing on Mars so difficult and risky?

Let us look in more detail at what is called the Entry, Descent and Landing (EDL) phase of a  Mars mission. This phase starts when the spacecraft enters the atmosphere of Mars and ends about 6-7 minutes later, when it lands on the surface.

For the MSL (Curiosity) mission in 2012, NASA created a fascinating YouTube video: 7 Minutes of Terror, in which scientists and engineers explain how many things can go wrong in this phase, while they can only watch helplessly. Watch the video, it takes only 5 minutes and gives a better explanation than I can provide here…:-)

But let me try. I will concentrate on the Curiosity lander because until now it is by far the most complicated mission of all.

The atmosphere of Mars is very thin, but the spacecraft enters with a high velocity of about 20.000 km/h and would be destroyed if it was not protected by a heat shield. Here is an artist impression of the so-called aeroshell in which the Curiosity (and all other landers) is safely stowed away. It consists of a backshell and a heat shield. 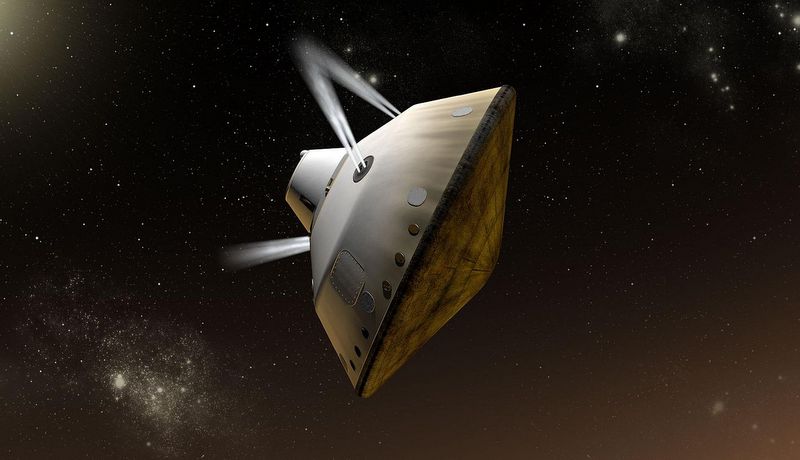 Here is the aeroshell in the assembly hall. The diameter is 4.5 m. You can see the Curiosity inside the backshell. On top of the backshell is the cruise stage which controls the spacecraft during the cruise from Earth to Mars. 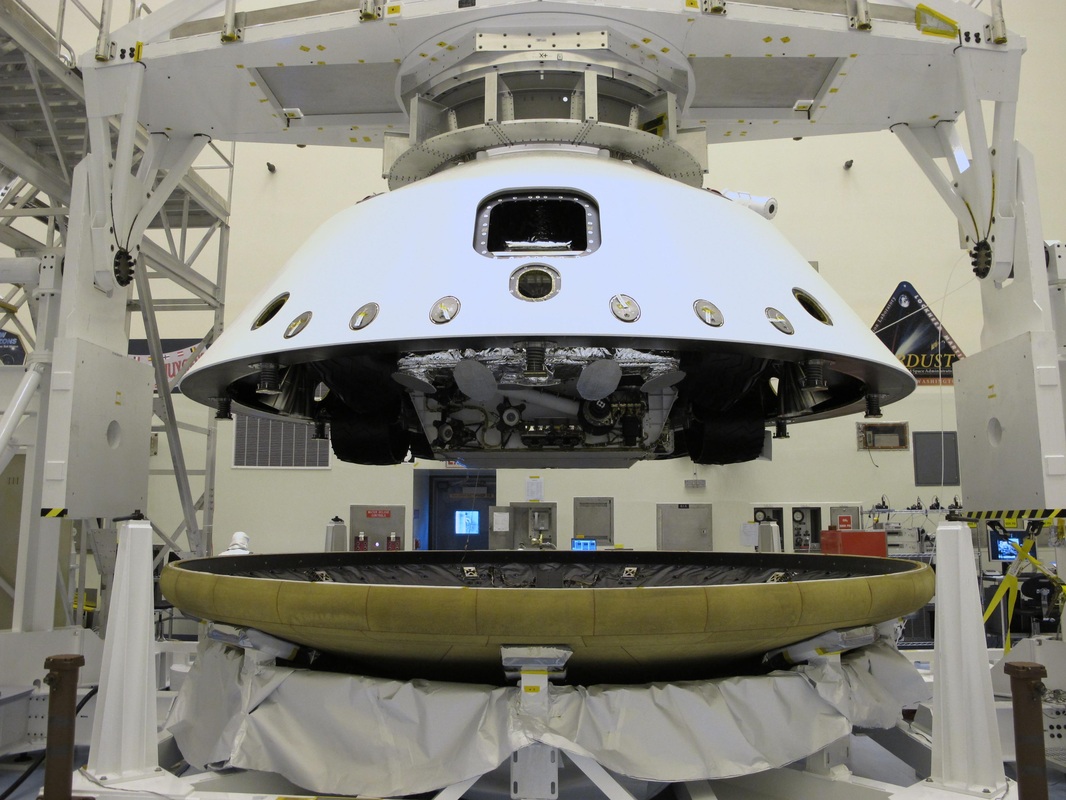 An exploded view of the aeroshell. From left to right the cruise stage, the backshell, the descent stage, the Curiosity rover and the heat shield. 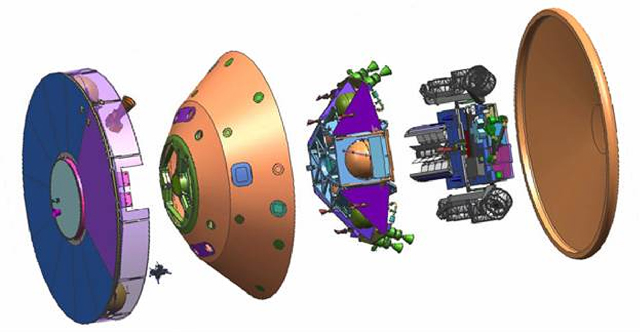 All Mars landing missions have three parts, two of which are basically the same: 1. slowing down by atmospheric friction and  2. further speed reduction by a parachute. You need one more step, because the Martian atmosphere is so thin that a parachute can not reduce the speed to (almost) zero at ground level. One way or another, you need (retro) rocket power for the last part

When the spacecraft is a lander, the “easiest” way is to provide it with retro-rockets. After the lander detaches from the backshell, it will unfold its legs and use its rockets to land. See the picture above of the Phoenix. The InSight used the same solution. Here is a picture of the InSight landing. 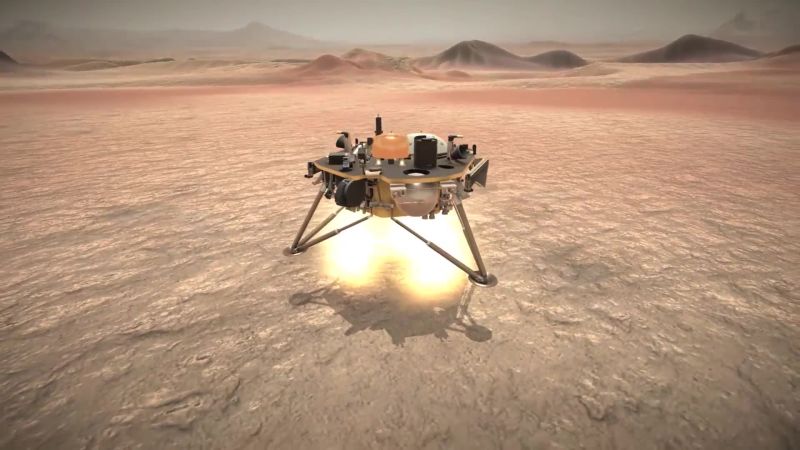 Rovers have to move around, so it doesn’t make sense to burden them  with the extra weight of these rockets. That’s why for the Pathfinder, Spirit and Opportunity another solution was developed. Put the retro-rockets in the backshell, lower the rover on a tether connected to the backshell,  protect it with airbags(!), use the rockets until almost zero speed, then drop the rover. Here is a collage of what it would look like for a Martian observer. Left, the airbags are already inflated, the rover is still hanging under the backshell, which is retro-firing. Middle, the rover has touched the surface but is still bouncing many times, before it comes to rest (right). Then the airbags will deflate and the rover is ready for action. Here is an animation of the landing of the Spirit rover.

The Curiosity is too heavy and voluminous for this airbag technique, so a spectacular new (and expensive) solution was developed. A sky crane!

Here is  a schematic view of the EDL process for the Curiosity. The first phase, atmospheric braking, looks normal, but there is a difference. Before the aeroshell enters the atmosphere at an altitude of 125 km, with a velocity of 20.000 km/h,  some mass is ejected one sided (“Cruise Balance Device Separation”). The resulting “unbalance” has as effect that the aeroshell will not move ballistically (like a projectile) but can be “steered” a bit through the atmosphere. The Martian atmosphere has turbulence,  storms, pressure differences etc, affecting the trajectory of the aeroshell, resulting in a considerable uncertainty in the final landing location.  The “hypersonic aero-maneuvering” reduces this uncertainty, important for Curiosity which had to land close to the rim of  the Gale crater. 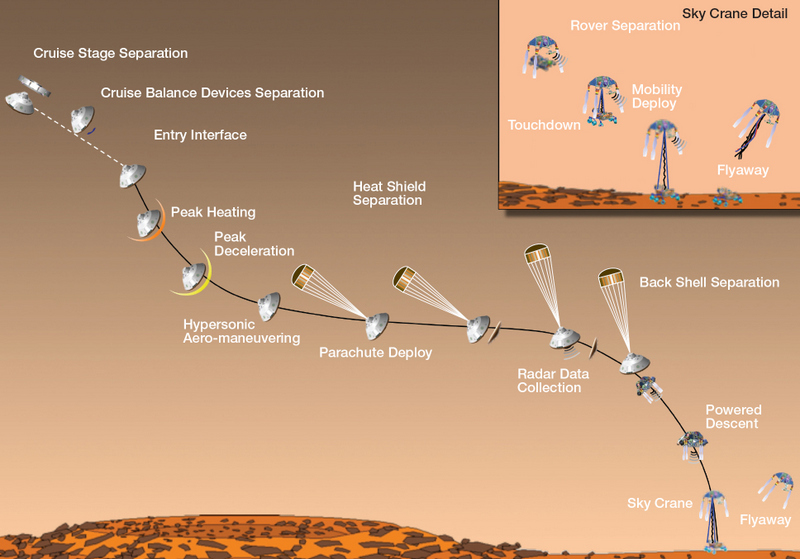 At an altitude of 10 km from the ground, when the velocity is about 1500 km/h, a huge parachute (diameter 17 m!) is deployed, slowing down the aeroshell further. The heat shield is ejected 20 seconds later. From that moment,  using radar, the exact altitude can be measured, and the precise time when the descent stage & rover have to detach from the backshell. The descent stage starts firing the retro-rockets, first to move horizontally away from the backshell and the parachute. Meanwhile the rover is lowered 7.5 m  on cables, it deploys its wheels, while still connected through an “umbilical cord with the descent stage. Here is an artist impression. 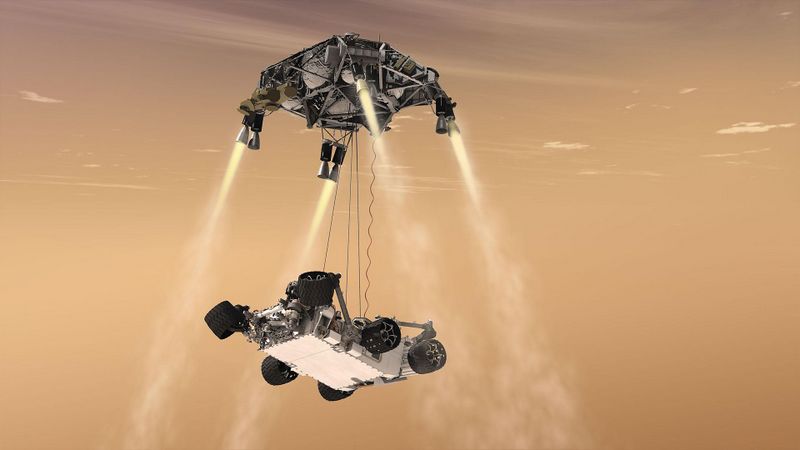 As soon as the rover touches the ground, the connecting cables are cut and the descent stage will fly up and away, to crash a few hundred meters from the rover

Compared with the Curiosity mission, the landing of InSight was a lot simpler, basically the same as the Phoenix in 2008. The mission of InSight is to study the interior of Mars, the precise landing location is less important, as long as the surface is flat. Therefore no “guided entry” through the atmosphere was needed. The InSight is also much lighter (360 kg)  than the Curiosity (900 kg), so it was decided to provide the lander itself with rockets.

Although the EDL phase for the InSight was 6 minutes,  the catchy description “7 Minutes of Terror” was again used in the media  for this mission…:-) The BBC:    Nasa’s Mars InSight mission heads for ‘7 minutes of terror’

Of course it is still a major technological achievement! NASA published a very good explanation of InSight’s EDL phase:  InSight landing on Mars .

Here are three pictures taken by the InSight. The lander has two cameras, the Instrument Context Camera is a fisheye camera, mounted underneath the lander deck. In the first picture (left), taken a few minutes after landing, the lens is still protected by a transparent cover, because of the dust whirled up by the rockets. In the right picture the cover has been removed. and as you can see, still a lot of dust has managed to crawl under the cover and stick to the lens. Unfortunate, although the images will still be usable. 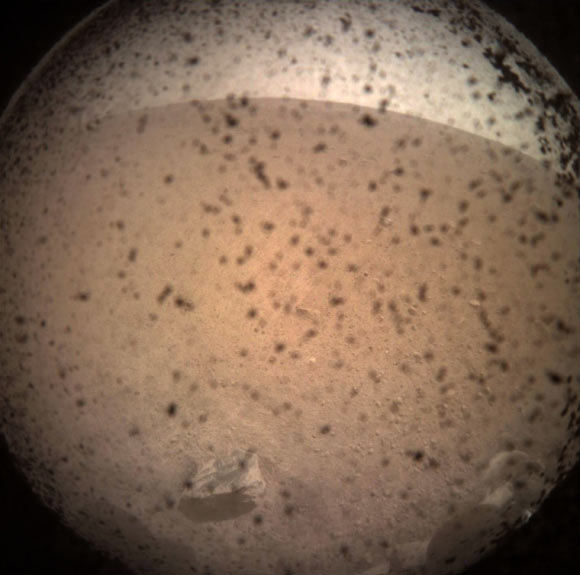 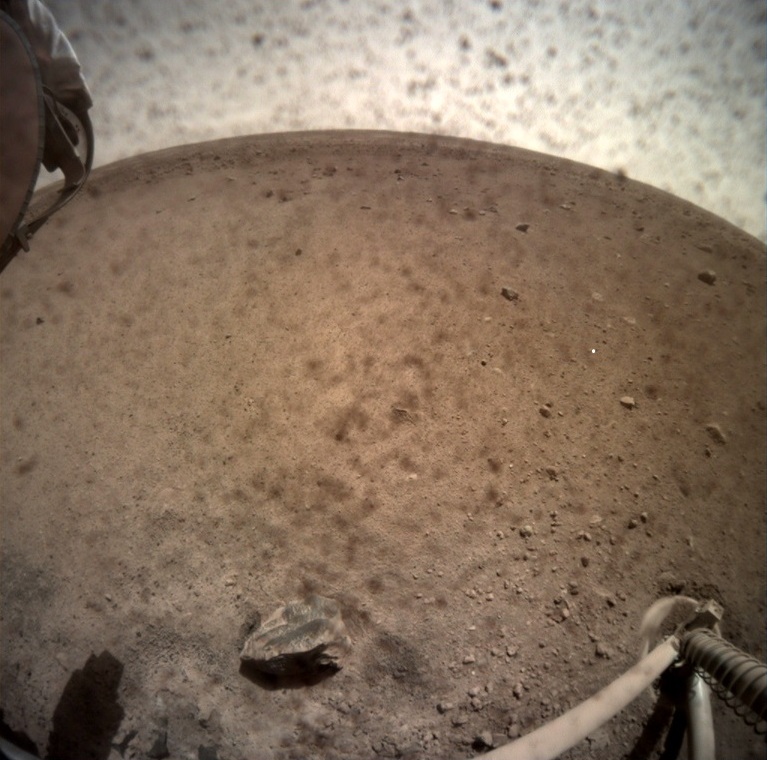 The second camera is mounted on a robotic arm, Here is a superb picture taken by this camera. The scientist are very happy with the sandy, rock-free location. The reddish box is the seismometer which later will be deployed after the best location has been determined. 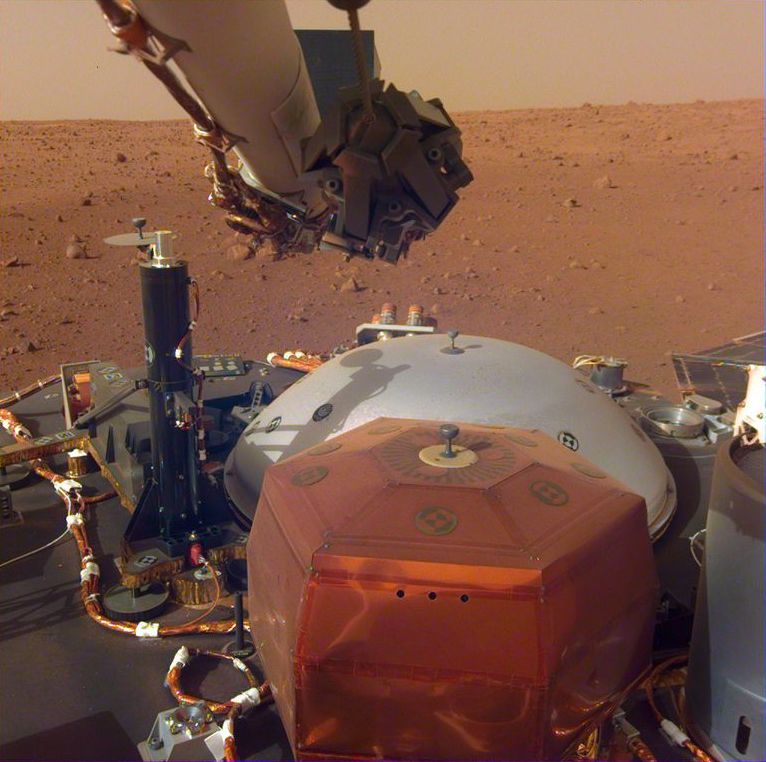 The latest news about the InSight mission can be found here