The last waterfall I visited was the Upper Tebing Tinggi waterfall in Perak, see A Dream Come True , end of March. That is a long time ago for a waterfall addict like me, I was really craving for a waterfall. Siang Hui had given me info about a waterfall near Ulu Rening, quite remote and not known to many people. A perfect destination for a day trip.

After our usual breakfast in a mamak restaurant, we (Aric, Rani, Edwin and I) drove to Batang Kali, where we bought nasi lemak for our lunch. Siang Hui had provided me with GPS-data and that was very helpful. The beginning of the trail was very clear, later it became  more vague, but no problem for experienced jungle trekkers like Rani and Edwin

It took us about two hours to reach the waterfall, about 4.5 km from where we had parked our car. At the end we had to cross the river a few times. The weather was perfect. 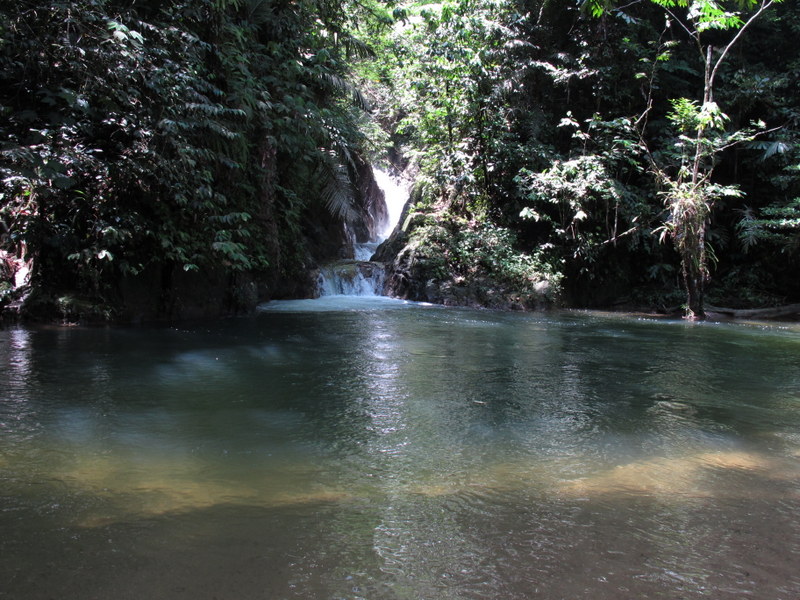 The waterfall was a nice surprise, because of the magnificent, very deep pool with crystal-clear water. In the picture you see the waterfall at the back, the water thundering down in a narrow gorge. To get there you have to swim and then scramble up the rocks to the right. Here, in a picture taken by Aric, you see Rani and Edwin trying to get closer to the waterfall in the background.

We spent a full two hours at the waterfall, having our lunch, making coffee, enjoying the peaceful surroundings. And of course playing with the water..:-) Before reaching the pool, the water went down one last step over smooth rocks, so you could slide down.Big fun!

As you can see, the water was very turbulent, not without danger as I experienced the second time I slid down. I was pulled down and back by the turbulence (see video) but I did not panic and managed to swim out. Scary moment for my friends, who were already prepared to come to  my rescue! That is why the video stops so suddenly..:-)

Here are more pictures of this wonderful trip.

We were hungry when we came out and Edwin suggested a Thai shop near Serendah. Ky IKEA friends had mentioned this shop a few times, but I had never been there. You must really know where it is, otherwise you will overlook it…:-)  We had nice Tom Yam noodles, Fried chicken, and Lok Mei (drink) for RM 41. A place to remember.
Here are two more video clips. The first one shows daredevils Rani and Edwin, conquering the current, so that Aric could take a picture (he is shouting “don’t move” to them, because the picture shown above is actually a HDR composite of three pictures)

And in this video Aric shows how to go down the slide without being caught in the turbulence…:-)

Chatting with my sister in the Netherlands after I came back home, I wondered if I was not getting too old for this kind of playing around.She sent me this cartoon.

The translation of the Dutch text is: