In part 1 we have seen that the Fibonacci series can be generated by a simple rule: start with 1, 1 then adding the last two numbers of the series gives the next one

When you take the ratio of two consecutive Fibonacci numbers, this ratio approaches the Golden Ratio φ (phi) = 1.61803.. as you proceed in the series. And we have seen the close relation between the Fibonacci numbers and the Golden Spiral. Take note in the picture below of the rectangle containing the spiral. The ratio between width and height is φ. You will not be surprised that it is called the Golden Rectangle..:-) 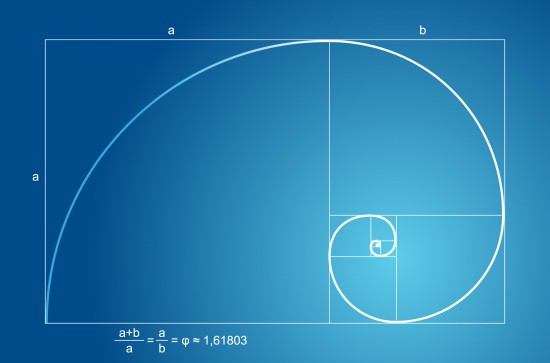 Has all or any of this a relation with the world around us? It is said that the Golden Rectangle is pleasing to the eye and that therefore many paintings have that format. It is said that the Parthenon temple in Athens was designed with φ in mind. There are people who believe that φ ( like π ) can be found in the dimensions of the  Pyramid of Cheops. And that the spiral arms of galaxies are Golden Spirals.

The above statements are unfounded (the Parthenon) , false (painters had no preference for the Golden Rectangle) or only partly true (spiral arms of galaxies are logarithmic, but in general not golden). People who know me, will not be surprised that I am a skeptic..:-). When you are a believer, you will be pleased with the Golden Number website, maintained by “Phi Guy:” who introduces himself with “The inspiration for the site came as a result of coming to faith in God through Jesus Christ.” The guy must have taken the alternative name for φ (Divine Proportion) very literally.

This site is more to my liking: The Myth That Will Not Go Away

Often in a discussion about the Golden Spiral, the Nautilus shell is mentioned. Here it is,  a beautiful example of a logarithmic spiral in nature. But is it a Golden Spiral, does it grow with a factor 1.618 each quarter turn? The answer is negative. The golden spiral is the blue line. It is clear that it grows faster than the Nautilus! The average growth factor for a Nautilus is ~ 1.33. 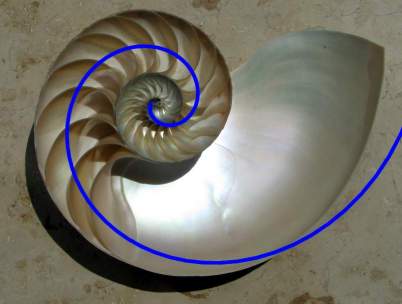 Many references to Fibonacci and the Golden Ratio in  the world around us, are incorrect.

Here is one more, funny example. Recently I found on FB a picture of Fibonacci Pigeons. The location of the pigeons has been indicated with yellow arrows. Nice how the distance between the pigeons increases from left to right. But is it Fibonacci? 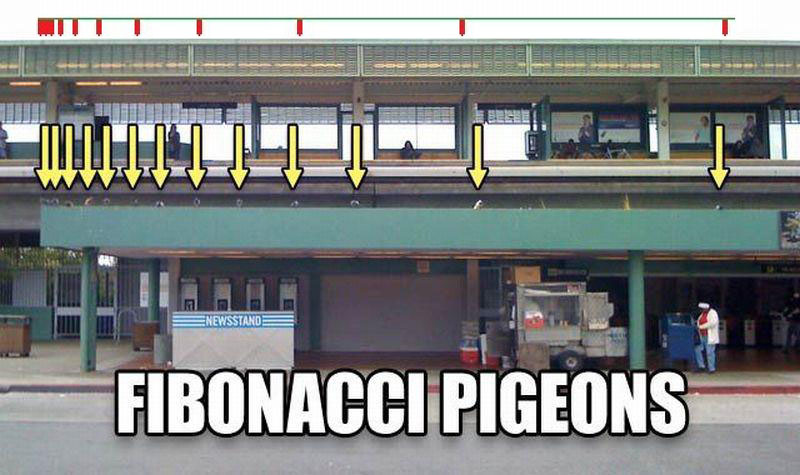 The answer is again negative. In the upper part of the picture I have indicated the Fibonacci positions. Compare the regular increase in spacing with the very irregular spacing of the yellow arrows!

Ok, time to become more positive…:-) Several painters (Dali, Seurat) were intrigued by Fibonacci numbers and the Golden Ratio. One 20th century artist, Mario Merz, was fascinated by it and you can find references in many of his works. Here are a few.

But the most beautiful examples come from nature, from the Kingdom of Plants.

Here is a sunflower. What we call the flower is actually a combination of hundreds of small flowers (florets) surrounded by petals. As you see the florets are arranged in two series of spirals, starting from the center. One series is curving clockwise (red), the other one anticlockwise (blue). Can you count the number of blue spirals and red spirals? 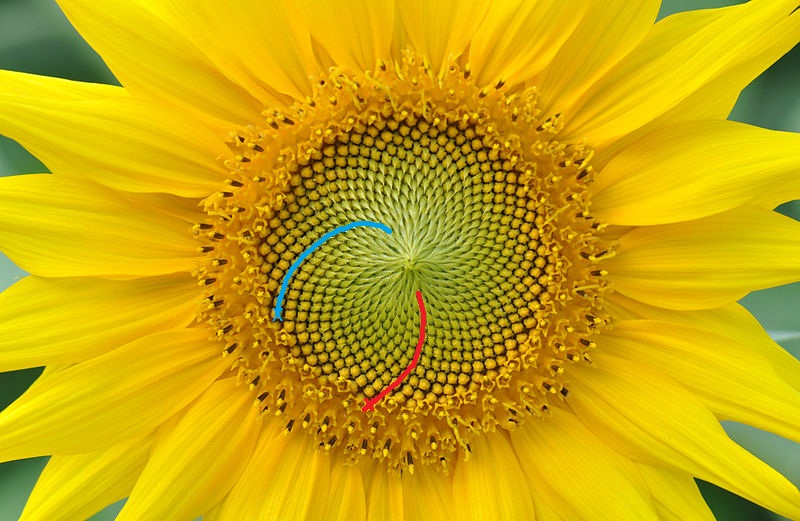 The answer is : 55 red spirals and 34 blue ones. Two Fibonacci numbers!

Here is a pine cone, that I found in the forest a couple of years ago. Also here the scales form  two series of spirals. I counted how many and found 13 green ones and 8 yellow ones. Again two Fibonacci numbers! Isn’t it amazing? Try it yourself with a pineapple..:-) 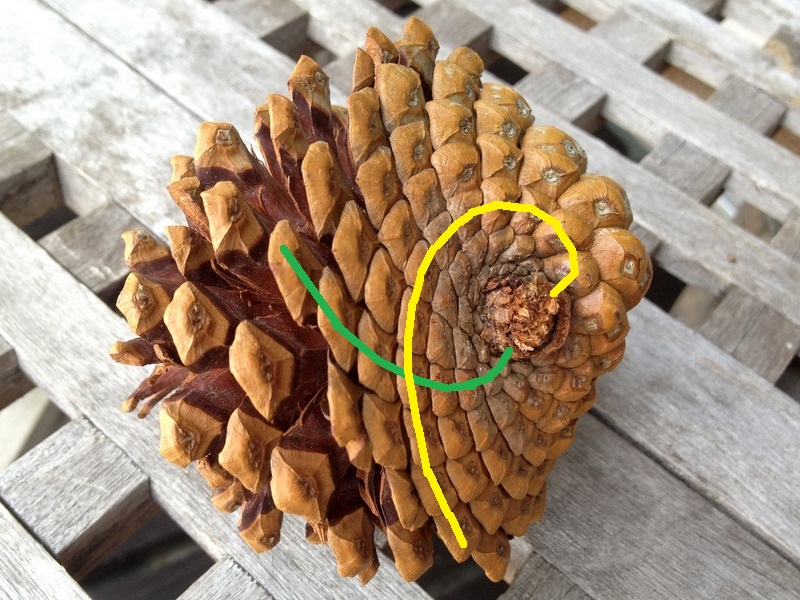 Is this Intelligent design? The Divine Proportion in action? The explanation is very interesting: by arranging the florets/scales this way, the available space is used the most efficiently. The idea is that new flowers/seeds are not formed in line with the old one, but rotated. If we express this rotation as part of a full turn (360 degrees), then a rotation of 0.5 would mean that each new cell is rotated 180 degrees. A rotation of 0.25 gives a rotation of 90 degrees, etc. Here are a few examples for various rotations. As you see, the result depends strongly on the chosen rotation value. For a value of 1.610, the space is used already quite efficiently.

So, let us try 1.6180, the golden ratio. We see an almost perfect filling of the space. Notice the two series of spirals and count the number in each series and you will find 13 and 21 ! 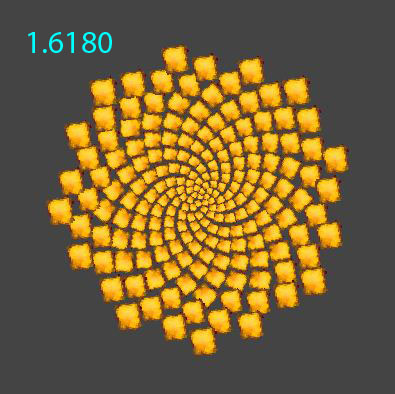 The pictures above have been created with a beautiful app, which can be found on the website Math Is Fun . Have a look, and try out other values of the rotation. You will also find there an explanation why φ is so special.

Much more can be said about the Fibonacci numbers and the Golden Ratio. A Google search gives numerous hits. Also a book has been published: The Golden Ratio: The Story of PHI, the World’s Most Astonishing Number