In January I have published a post about the Rosetta spacecraft, launched in 2004 with as destination a comet, the  67P/Tsjoerjoemov-Gerasimenko. It had gone in hibernation in June 2011 and on 20-1-2014 it woke up again.

In the past six months the spacecraft has been coming closer to the comet while its thrusters have slowed it down in a number of carefully planned maneuvers.

Today (6-8-2014) was another critical moment. In a thrust of more than 6 minutes, the spacecraft should reduce its speed relative to the comet to about 1 m/s, while at a distance of ~ 100 km away from 67P.

It has been confirmed that the operation was successful. Mind you, the comet and Rosetta are at the moment moving between Mars and Jupiter, on their way to the Sun. The distance to earth is about 400 million km, so signals between Rosetta and Earth take more than 20 minutes!

Check this fascinating link to follow Rosetta in its complicated trajectory, from the start in 2004 until the end of the mission in 2015: Where is Rosetta

As Rosetta is now close to the comet its on board camera has taken pictures of the comet. Here is one, taken three days ago. 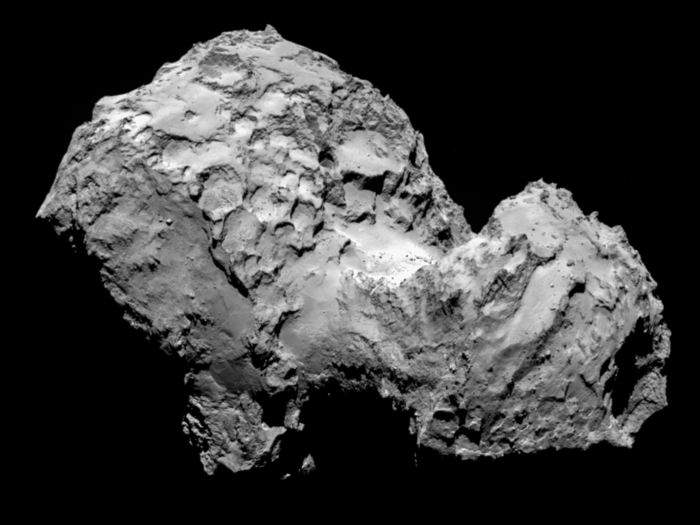 An amazing picture. The comet has already been nicknamed “rubber duck”. A “binary” comet, consisting of two parts! And it doesn’t look like a “dirty snowball” at all. To say that the scientists are excited, would be an understatement..:-)

Here is another interesting picture, superimposing the comet on the city of London, to give an impression of its size. 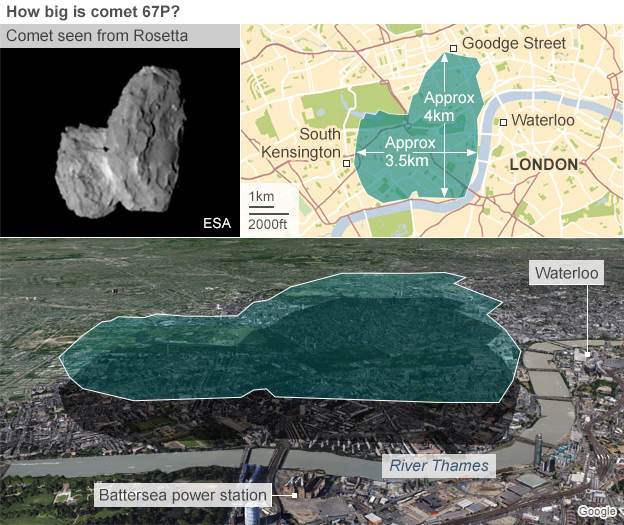 What will happen next? Rosetta will follow a complicated triangular trajectory the coming weeks (using again its thrusters) to test and explore the gravitational field of the comet. Here is a YouTube of its proposed trajectory. Almost like an abstract ballet..:-).

The sudden orbital changes are caused by the thrusters, the curvature by the gravitational field of the comet. The complicated shape of the comet may make it more difficult to determine its gravitational field. Finally Rosetta will settle down in a stable orbit around the comet, maybe as close at 10 km,  and then, in November, it will launch its small probe Philae, to make a soft landing on the comet.

That will become another update…:-)

For more information, follow the very informative Blog of Rosetta