The Kathina festival in Taiping was held this year on 8 November. About the background of this Buddhist festival you can read more in an earlier blog The Kathina Festival 2013 . This time Aric joined me. The Sasanarakkha Buddhist Sanctuary (SBS) where the festival is held, is located high up the slopes of Bukit Larut. You have to park your car at the Chinese cemetery, from where volunteers with pick-up trucks and 4WD’s bring you to the sanctuary. Perfect organisation!

Waiting at the cemetery

Arrival at the sanctuary

When we arrived, around 7am(!), there was already a big crowd, enjoying the large variety of food, prepared by volunteers and free of charge. A very nice, friendly atmosphere. Our friends Mary, Jenny and George had arrived early and were busy distributing mineral water.

By volunteers Mary and Jenny

There was a remarkable number of Myanmar devotees. I understood that many of them had been helping SBS preparing for Kathina. Another reason could be that Myanmar is Theravada Buddhist, like SBS. Do you know the difference between Theravada and Mahayana Buddhism? Maybe I should write a separate blog about it..:-)

The Myanmar people carried a lot of gifts for the monks and they also performed a very nice musical show, with songs and dancing.

Carrying gifts for the monks

One group of dancers

Around 10 am the alms giving ritual started. Very symbolic and impressive. The food stalls closed and everybody received a plastic cup with some rice in it and a small spoon. When the monks were passing you put a little bit of rice in the alms bowl they were carrying.

The atmosphere was solemn. Here are two nice pictures taken by Aric. 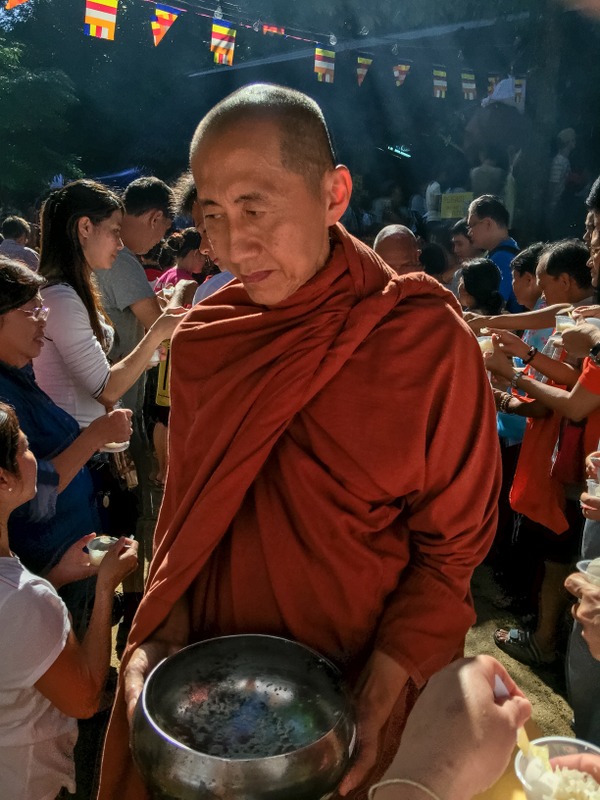 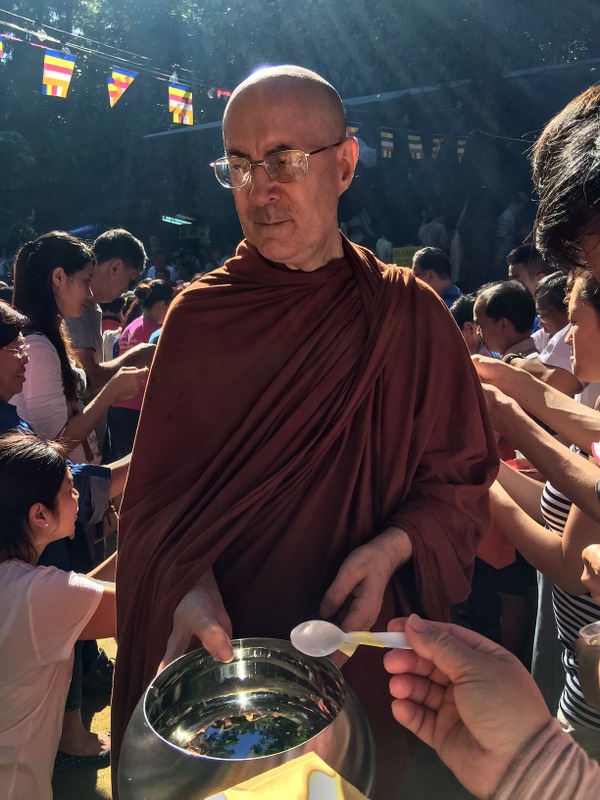 And here is a (too) short video clip

After the alms giving the monks walked to platforms where they sat down to receive gifts from the devotees.

I thought that the monks received here their new robes, but that is not true, the devotees present gifts.  A friend explained that actually only one piece of cloth is presented to the Sangha (the monk community). This is done early morning and during the day this cloth is used to make one robe. Which monk will receive this robe? During the Vassa (the period that monks don’t travel but stay in the monastery) they have to follow many rules and precepts. There are so many rules, that you can easily forget one or two..:-). My friend told me that the monk with the best “precept keeping record” gets the robe. Don’t know if it is true, it doesn’t sound very Buddhist, but it is a nice story.

The last part of the festival is a talk/lecture by the monks.  We listened for a while to the English talk by the head monk (?) before we walked down. This path down had been upgraded by the Myanmar volunteers and was really a pleasure walk, back to the car.

Lecture by the head monk

Lecture in another language

Starting our walk down

I hope to attend Kathina again in the coming years.