My last blog about the Rosetta, Dawn and New Horizon missions was posted in July last year. Before I give an update, let’s first have a look at our Sun. Here is a recent graph of the number of sunspots. Cycle 24 has reached a maximum in April 2014 and is coming to an end. 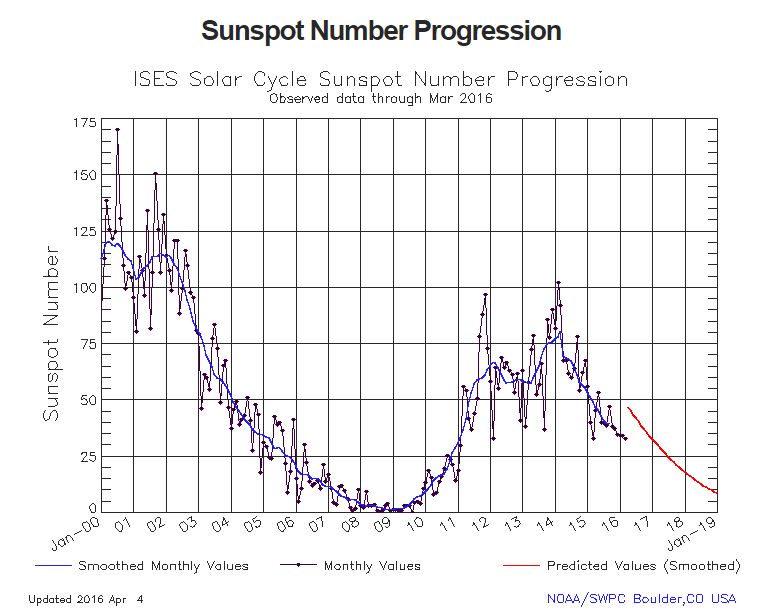 As you will notice, cycle 24 has a double peak, in itself not unusual, but this time the second peak is higher than the first one. The maximum of cycle 24 is much smaller than that of cycle 23, and the prediction for cycle 25 is that it will be similar to cycle 24 or even smaller.

Here is a graph of the sunspot cycles, recorded until now. It looks like we have passed the Modern Maximum and are going to a minimum. Are we heading to a new “Little Ice Age“?  As I wrote in an earlier post, this is a sensitive issue, and I will not comment on it..:-). Be very wary when you search the Internet for info  about a relation between solar activity and global warming. Always check the credentials of the report. You might try this site: Skeptical Science

Here is a dramatic image of our Sun, taken by the Solar Dynamics Observatory. Magnetic field lines are superimposed. 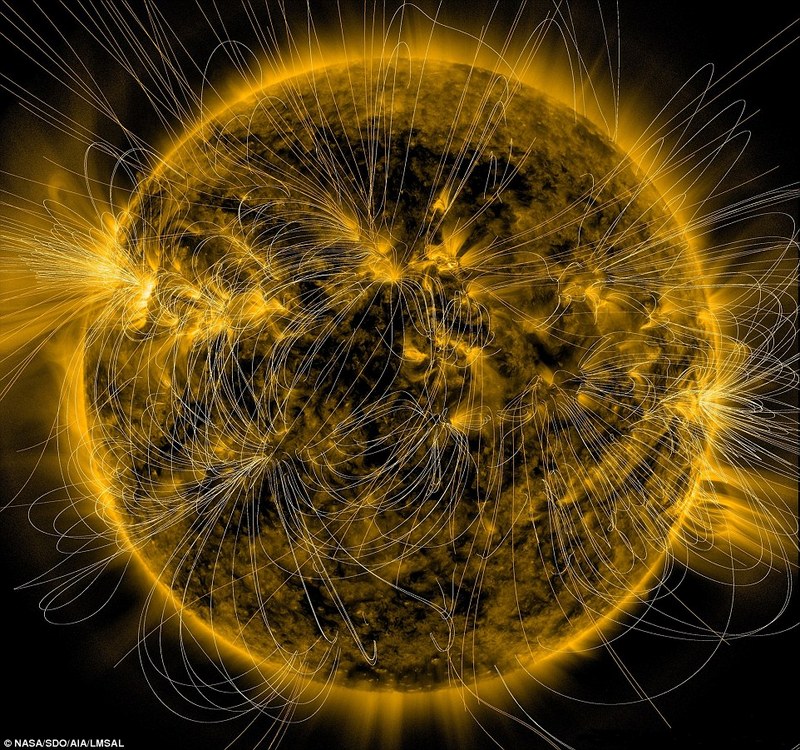 Rosetta is still orbiting comet 67P, which has passed its perihelion and is now on its way out into deep space. Here is the position of Rosetta and the comet, end of last year, the comet has passed already the orbit of Mars. No signals of the comet lander Philae have been received anymore, but Rosetta itself is still active. 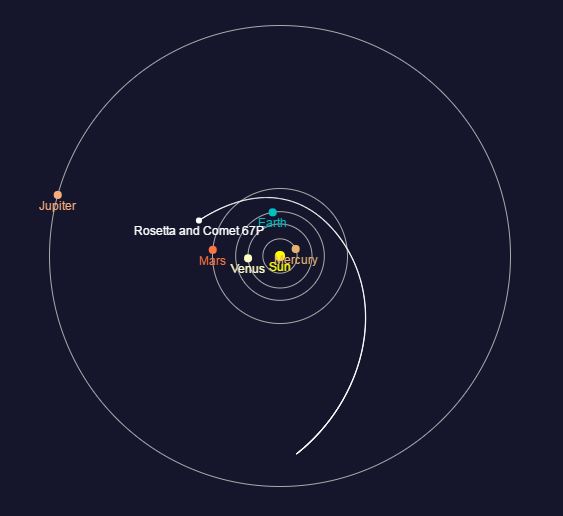 Here is a recent image of 67P, taken on 27 March, when Rosetta was 329 km away from the comet nucleus. The Sun is behind the comet, with a spectacular result. 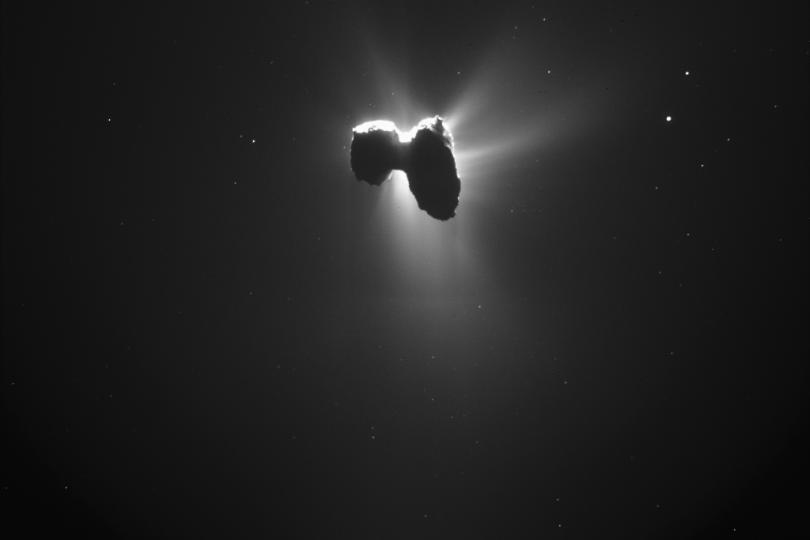 The scientists are planning to let Rosetta make a controlled landing on 67P in September 2016, which will be the end of the mission. You can find the latest news on Rosetta’s blog

Dawn is still in orbit around dwarf planet Ceres. Slowly getting closer, resulting in more detailed pictures. You may remember the excitement about the bright white spots. Now we know that they are located in the center of a crater, which has been given a name: Occator. More (smaller) white spots have been found 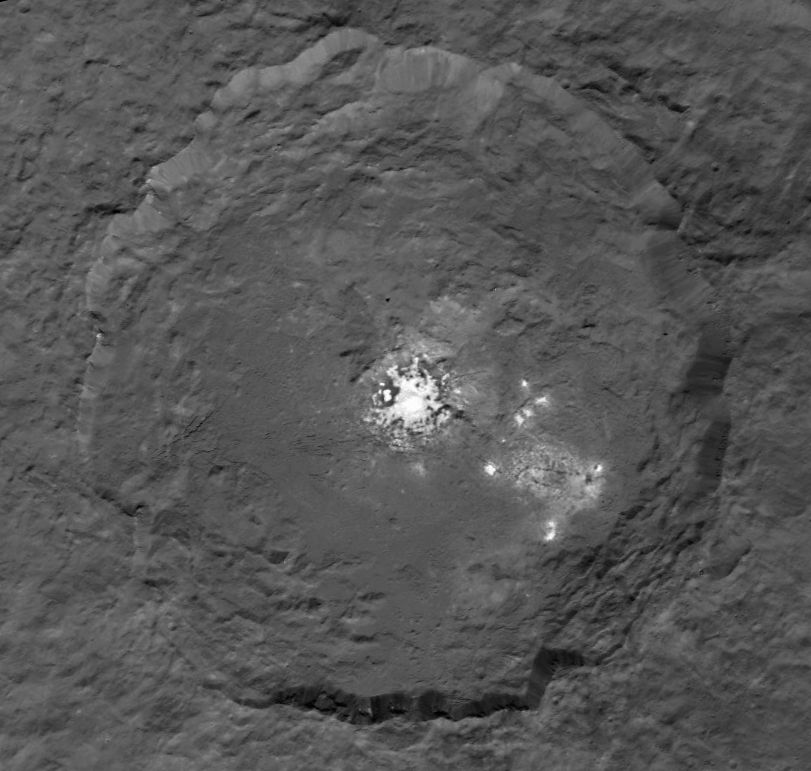 Here is the most recent picture (in false color), taken 30-3-2016 from an altitude of 385 km. . Spectacular. Scientists now think that the white spots are formed by highly reflective material, possibly ice or salt. 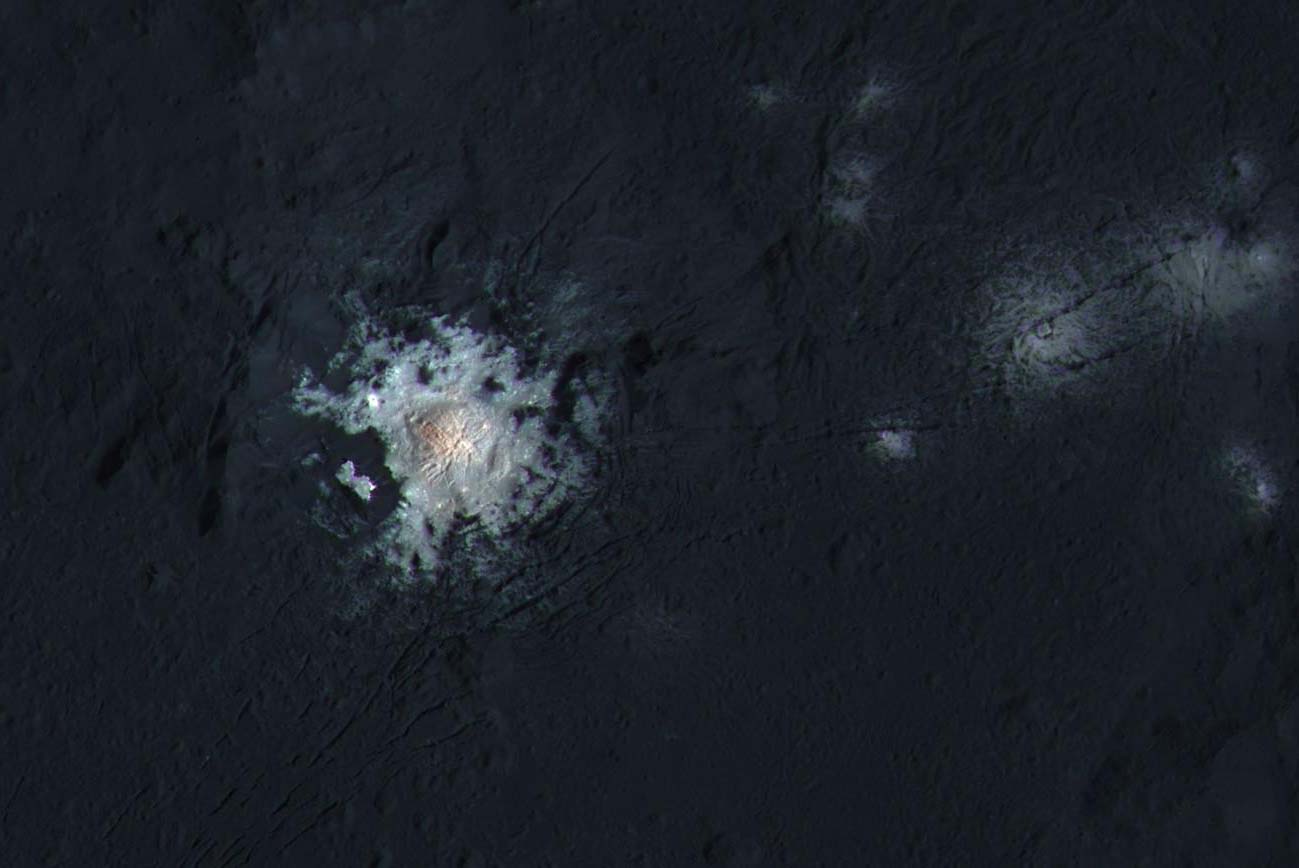 Actually Dawn is taking pictures of the whole surface of Ceres. Scientists have been busy giving names to the various features..:-) 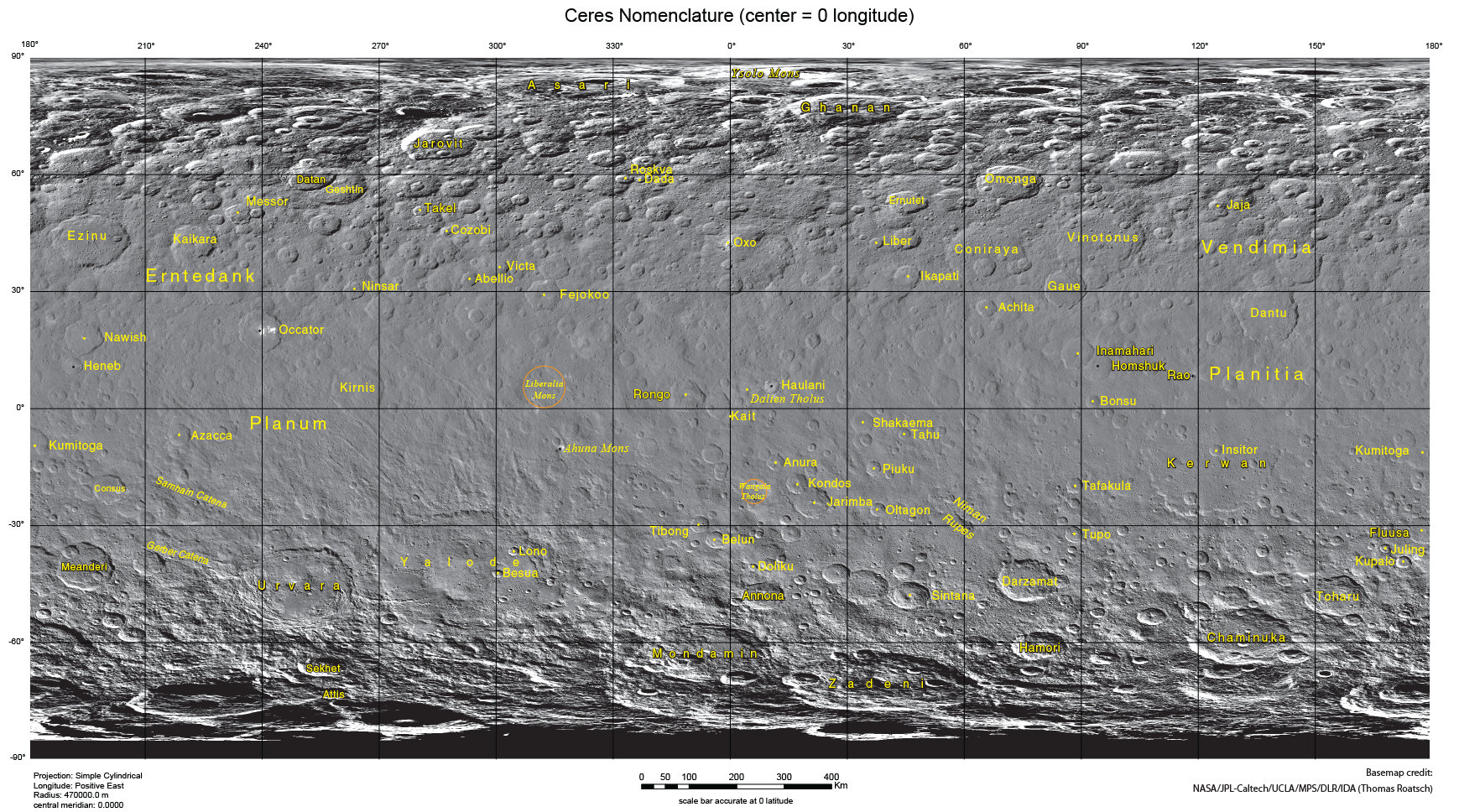 For more information about Dawn, read this detailed blog So.Much.Ceres, published a few weeks ago

On 14 July 2015, the New Horizons spacecraft passed Pluto at an altitude of 12.500 km above its surface. It took as many pictures during the fly-by (of only a few minutes!) as possible and it still has not finished transmitting all the data to Earth!

Here is one of the images, released a few days ago. It shows numerous “haloed” craters. The false-color image gives the composition: purple is methane ice, blue is water ice. Why the crater rims and walls consist of methane ice has not yet been explained. 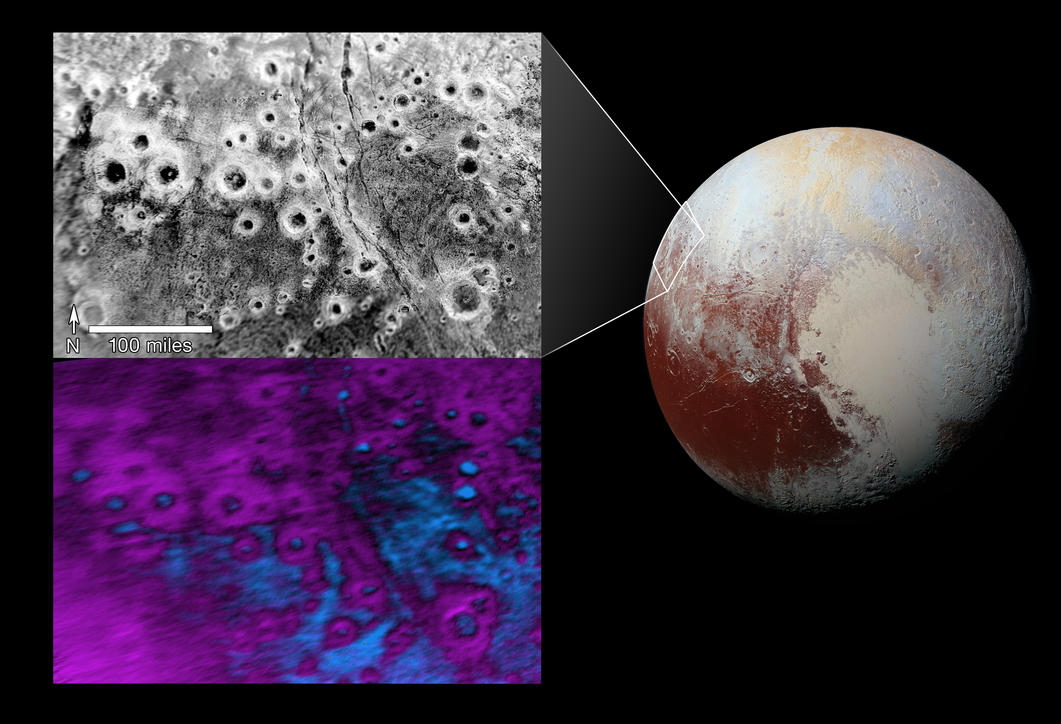 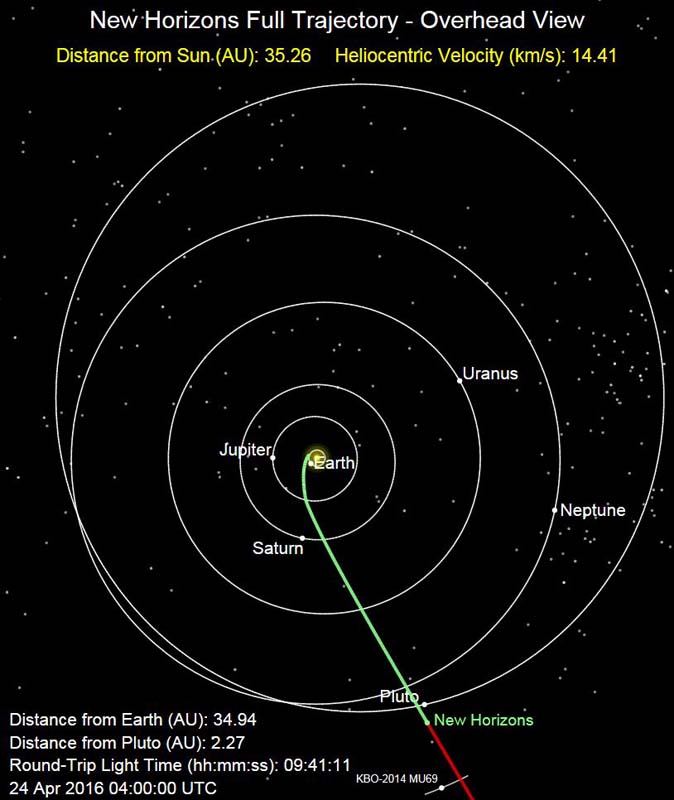 We have reached the outskirts of our Solar System. Pluto, once the 9th planet, has been demoted and is now considered a dwarf planet belonging to the Kuiper belt. Recently more dwarf planets have been discovered in the region beyond Neptune,  Eris ( in 2005) , Haumea (in 2004) and Makemake (in 2005)  Like Pluto they have quite elliptical  orbits and periods in the range of a few hundred years. Pluto for example has a period of  248 year and its distance to the Sun varies between 30 and 49 AU, where 1 AU (the average distance between Earth and Sun) = 150 million km. The orbits of these dwarf planets have been strongly influenced by big neighbour Neptune.

In 2003 dwarf planet Sedna was discovered with an estimated period of 11.400 year and a distance to the sun varying between 76 and 936 (!) AU. Here is the orbit of Sedna. Pluto’s orbit is purple. 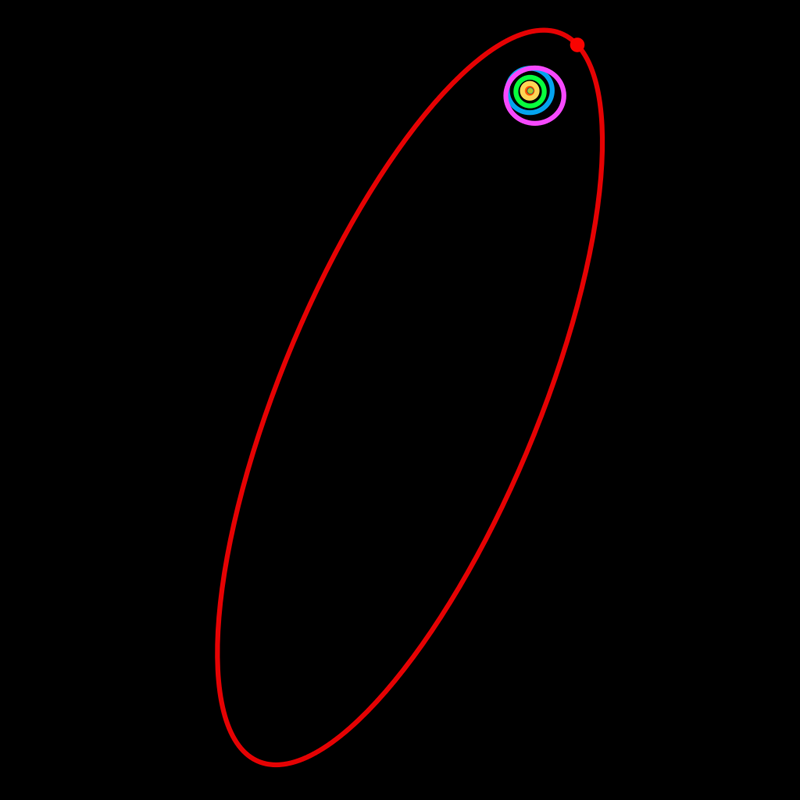 What could have caused such an extremely elliptical orbit? It can not have been gravitational disturbance by Neptune, because it never comes close to Neptune (distance of Neptune to the Sun is 30 AU).

In the last decade more of these “strange” objects have been discovered. For example in 2012  2012 VP113, estimated period 4200 year, distance to the Sun between 80 and 438 AU, also very elliptical.  Here the orbits of six of them are given. 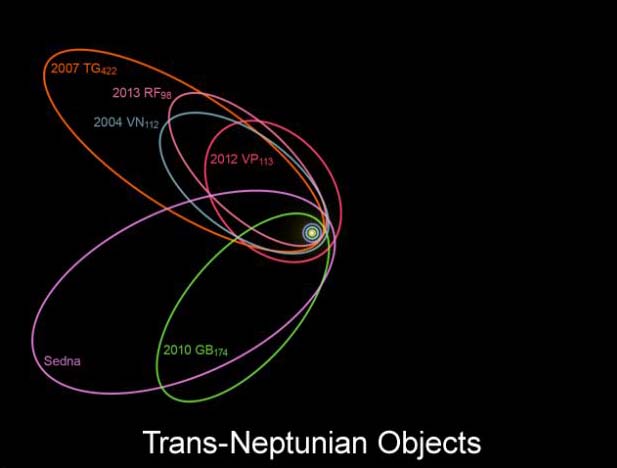 Could these orbits be gravitationally disturbed by an UNKNOWN planet in the outer reaches of the Solar system?

On 20 January 2016 astronomers Brown and Batygin published an article in the Astronomical Journal: Evidence for a distant giant planet in the Solar System (abstract). Using computer models, they find that a planet with a mass about 10 times the mass of Earth, a period of 10.000-20.000 year, and a distance to the Sun varying between 200 and 1200 AU, could explain the orbits. Tentatively this planet is named Planet Nine .

Here is a sketch with the position of this Planet Nine. 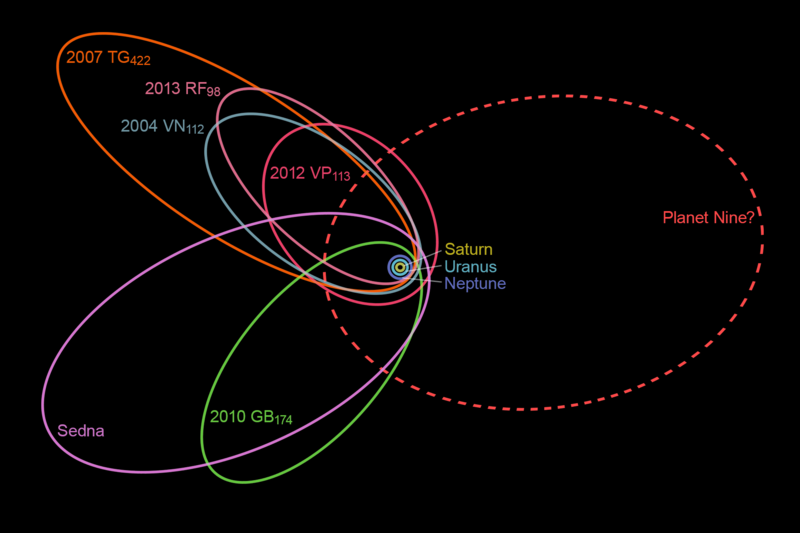 Of course this is a hypothesis until now. Other explanations are possible. Next step is to try and find Planet Nine. That will not be easy, even for the most powerful telescopes. And where to look for it?

Here is a picture of the two authors, both astronomers from Caltech. By the way, Brown (left) is  the guy who discovered Eris, which started the demotion process for Pluto! 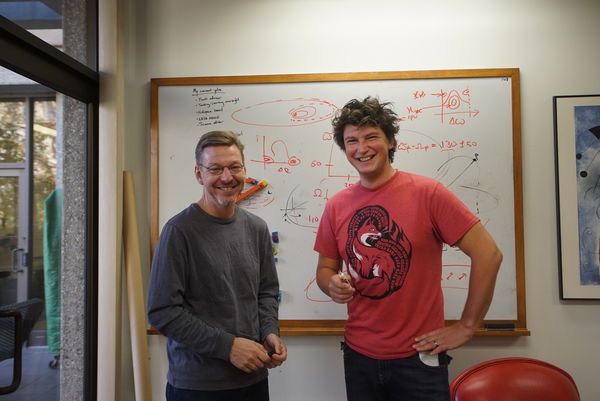 They have started a website The Search for Planet Nine and just submitted a (highly technical) paper in which they discuss where to search for this planet.

If Planet Nine is ever found, I will not be surprised if they get a Nobel Prize for their research.

1 thought on “Our Solar system, an update”