In 2014 I have published several posts about Rosetta, the spacecraft that has explored the comet 67P. Click here for my reports. I am very interested in these Close Encounters between spacecraft and celestial bodies. Here is a new one, the Japanese Hayabusa mission. Actually there are two Hayabusa spacecrafts, the first one was launched in 2003, the second one in 2014.

Their mission was basically the same: Fly to an asteroid,  land on it, collect some asteroid material, then fly back to Earth to deliver the collected material.  An ambitious project!

Hayabusa was the first spacecraft ever that has landed on an asteroid and returned to earth with some asteroid material. Not as much as was hoped for, because the mission encountered quite a few technical problems. Therefore a second, improved Hayabusa2 spacecraft, was designed and launched on 3 December 2014.

Destination? A tiny asteroid, 1999 JU3.. In an earlier post I have explained the complicated naming of the minor planets. The J stands for the first half of May, U stands for 20 and the subscript 3 means 3×25. So this asteroid was the 95th minor planet, discovered in the first half of May 1999. This provisional name is replaced by a number and sometimes a name, in this case 162173 Ryugu. It is the 162173th minor planet and the name has been suggested by JAXA, the Japanese counterpart of NASA.

Here is the route followed by Hayabusa2 to Ryugu.The Earth orbit in blue, Ryugu in green and the Hayabusa2 in purple. 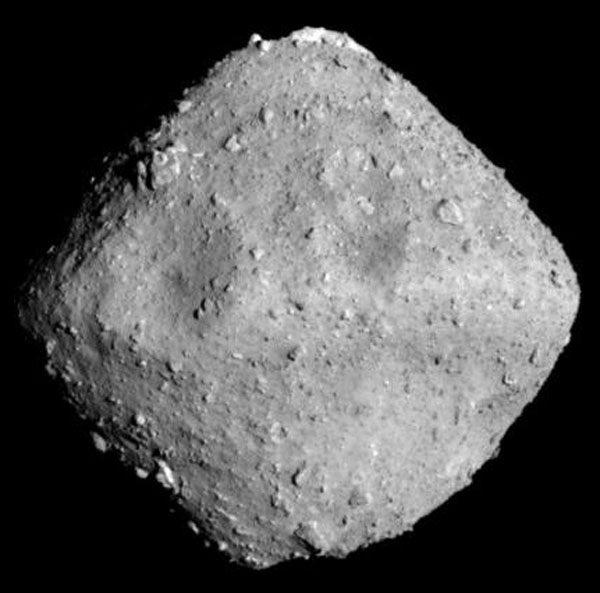 Properties of Ryugu:  not really spherical, diamond-shaped, a diameter of ~ 900 m and a rotation period  of 7.6 hours. The gravitation at its surface is about 80.000 times smaller than on Earth!

Until December 2019 Hayabusa2 will stay near Ryugu, at a distance of 20 km (HP, home position), where the gravitational attraction of the asteroid is almost nothing.  From there it will investigate the properties of the asteroid and several times it will descend for a short time to the asteroid.

On 20 September the spacecraft started a slow, controlled descent and one day later, 55 m above the surface of Ryugu, it dropped two Minerva rovers. While they were falling down to the surface, Hayabusa2 ascended to HP. Both rovers are working correctly, a huge relief for the scientist,  They are really tiny, diameter 18cm, height 7 cm, mass 1.1 kg Here is an artist impression. 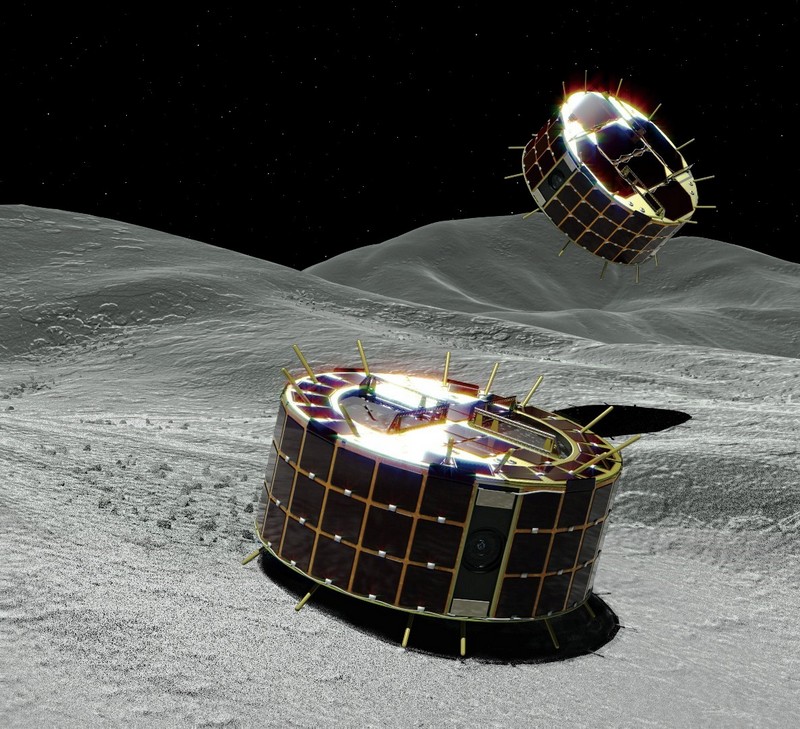 Both rovers have multiple cameras and temperature sensors on board They can move around by “hopping” and do this autonomously! Wheels like for example the Mars rover has, would not work in this low gravity world.  One hop can take 15 minutes and move the rover horizontally ~15 m.

This is a picture of the Ryugu surface, taken by  one of the rovers.The scientists are surprised that the surface is so rough. 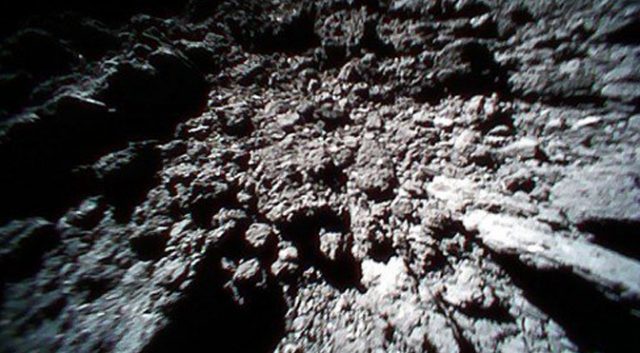 On 3 October, the spacecraft descended again to Ryugu, to drop the MASCOT lander, developed by the German and French space agencies. A bit larger and heavier, size of a shoebox, mass ~10 kg. Contains cameras and various scientific instruments. No solar cells like the two rovers, but battery operated, able to provide power during 16 hours. Also able to hop, like the rovers.

This is an artist impression of the MASCOT, leaving its container in Hayabusa2. 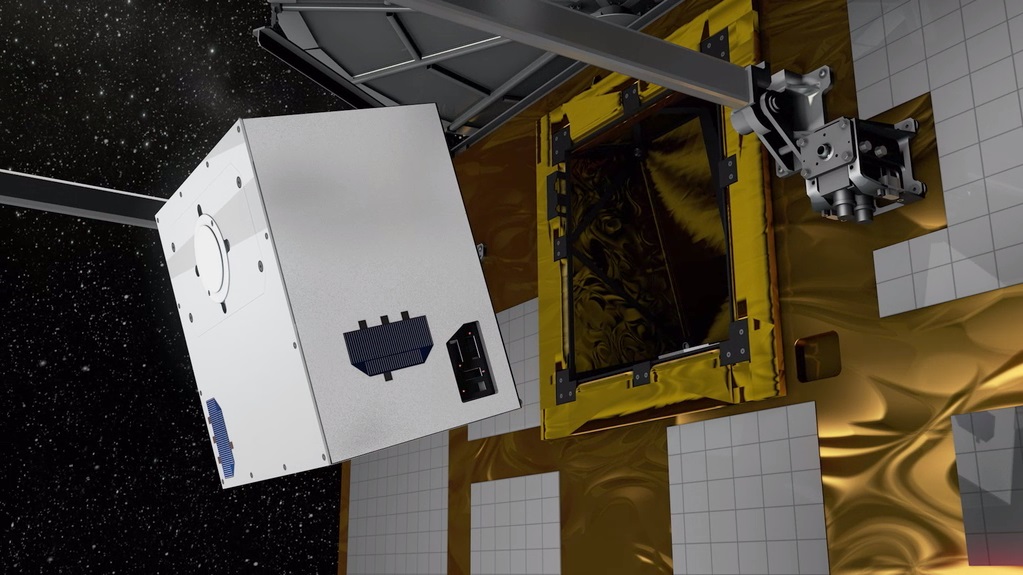 During the descent, Hayabusa2 was able to follow the lander. The yellow line is the actual path, the blue line is the projection on Ryugu’s surface. The times are given as “hhmmss”. After it hits the surface, it bounced several times. During the last part (straight blue line),no pictures were taken. The location 02:14:04 is the final landing place. The separate location 00:55:09 +1 is taken one day later and proves that MASCOT has managed to hop. The shadow is from Hayabusa2 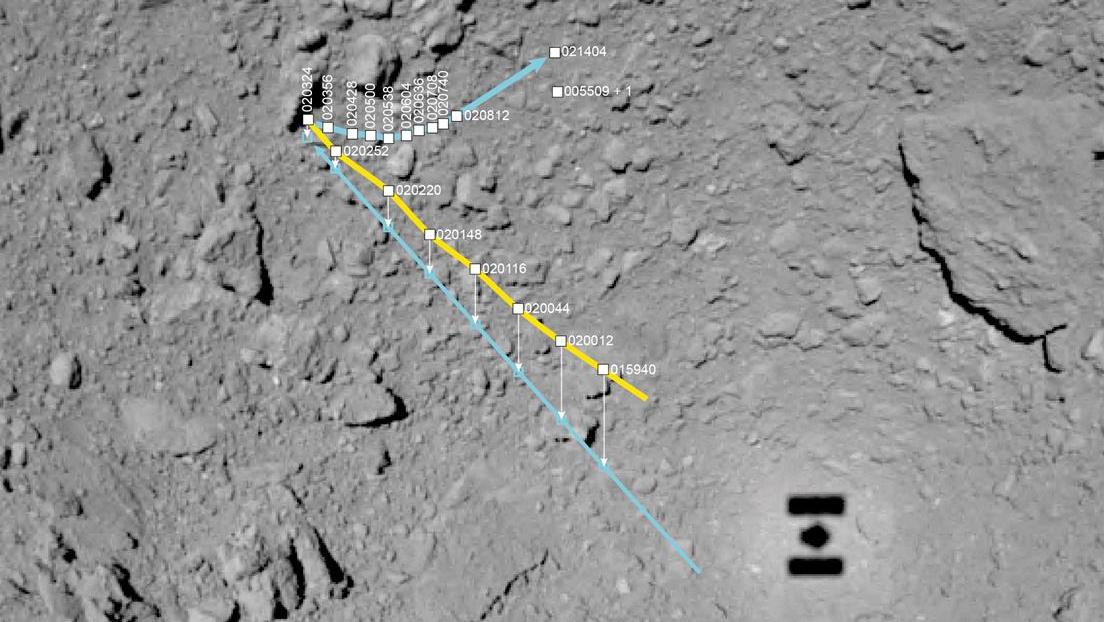 Here are two images taken by MASCOT itself. Left while descending to the surface and yes, that is its own shadow top right. Right after landing, again showing a very rough surface. 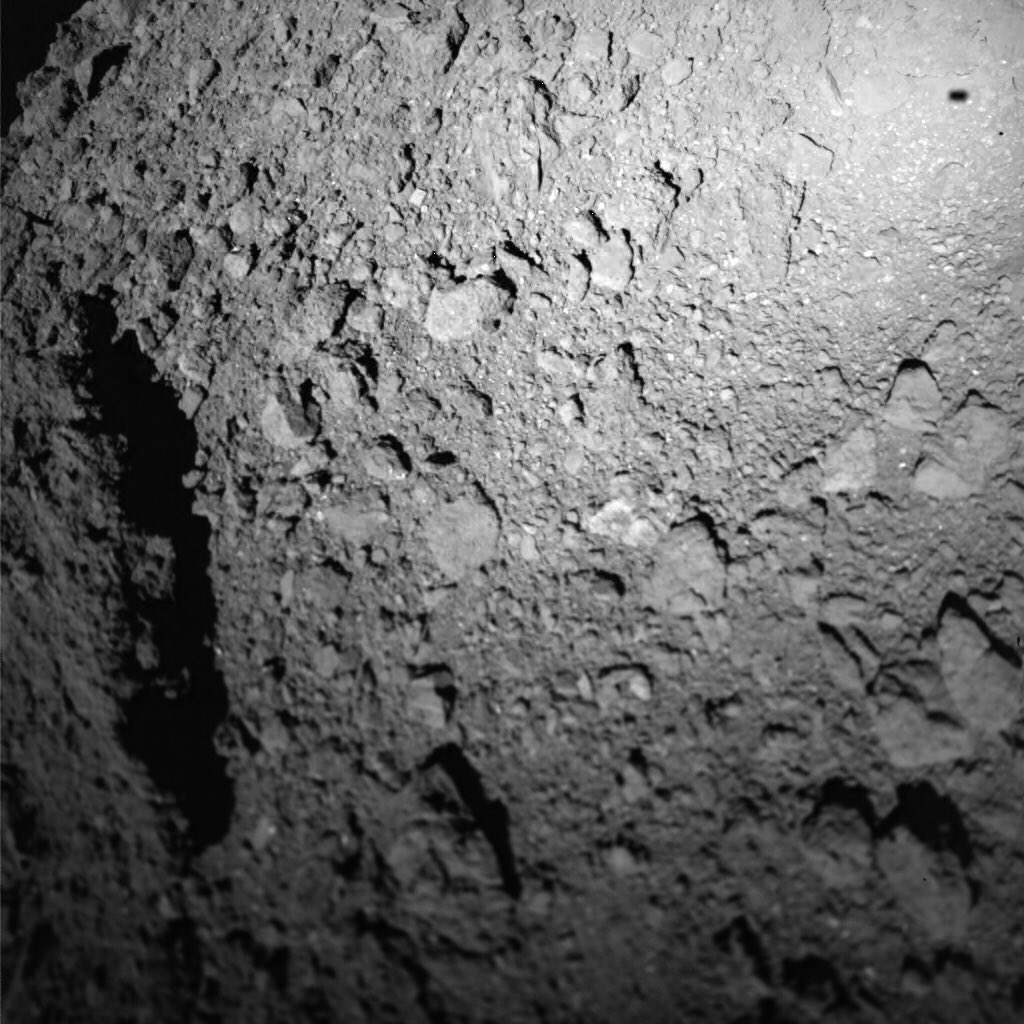 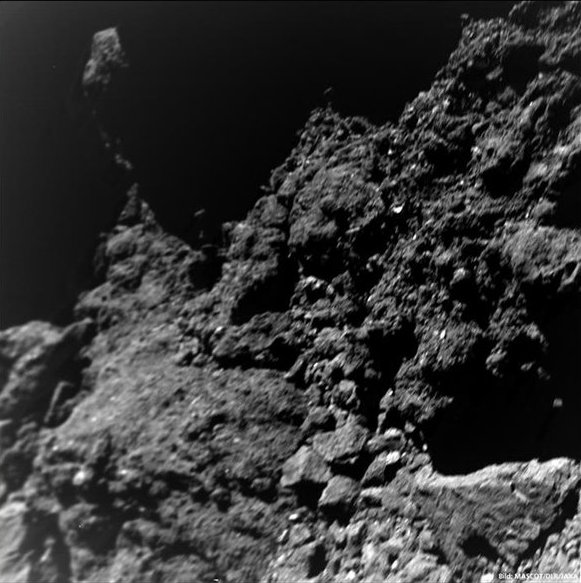 After the successful landing, MASCOT started to use its scientific instruments (spectrometer, magnetometer and radiometer) and sent the data back to Hayabusa2 within the limited timespan of 16 hours. Actually the batteries lasted one hour more, a bonus. It hopped two times.

Until now the mission has been very successful: two rovers and one lander have touched an asteroid for the first time in history!

What will be next? The main mission is to collect material from Ryugu and bring it back to Earth. How to do that? Here is a schematic view of Hayabusa2. Notice the .Sampler Horn at the bottom 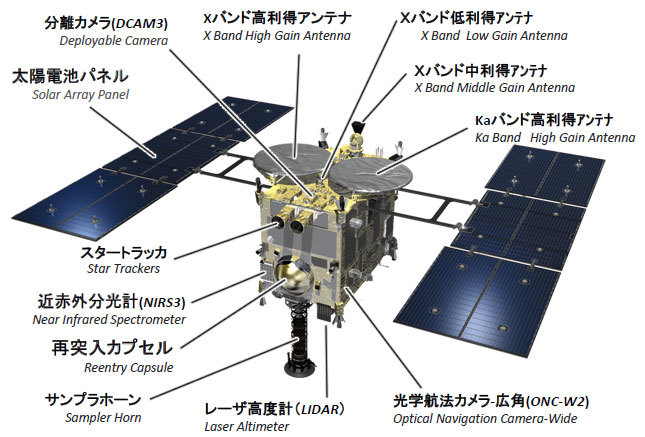 This is the procedure: the Hayabusa2 will descend very slowly to the asteroid until the horn touches the surface. Then a small (5g) bullet will be fired inside the horn, hit the surface at high speed and surface particles will fly up and be collected at the top of the horn. Hopefully at least 0.1 gram, maximum 10 gram. This will be done at two different locations.

The third and last one is quite spectacular, an attempt to collect material below the surface. Here is another view of the bottom of the spacecraft. Next to the horn you see the Small Carry-on Impactor. 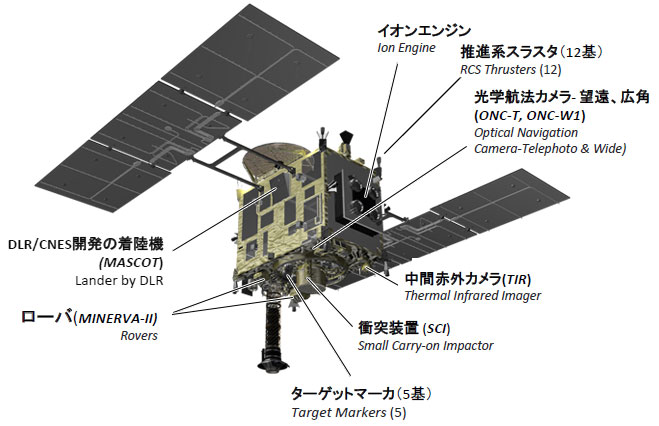 It is an explosive device, meant to create a crater in Ryugu, so that Hayabusa2 can collect the debris. Here is how it works . The explosive will deform the copper shield (2.5 kg) into a projectile, that will hit the surface at a speed of 2 km/s, creating a crater with a diameter of several meters

By the way,  this is where the idea may have come from…:-) 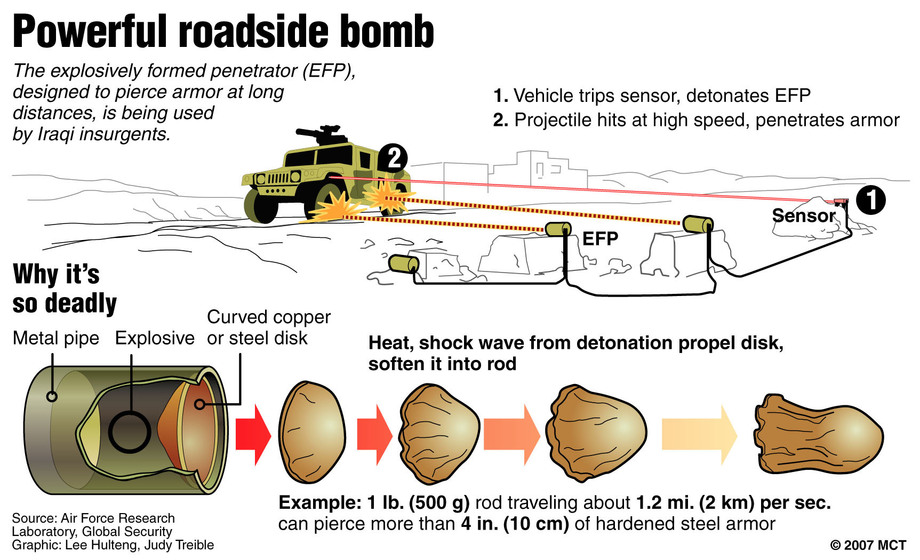 The explosion must of course not damage Hayabusa2 itself! The  scientists have found this spectacular solution:

Here is an artist impression, where Hayabusa2 is descending above the newly formed crater. 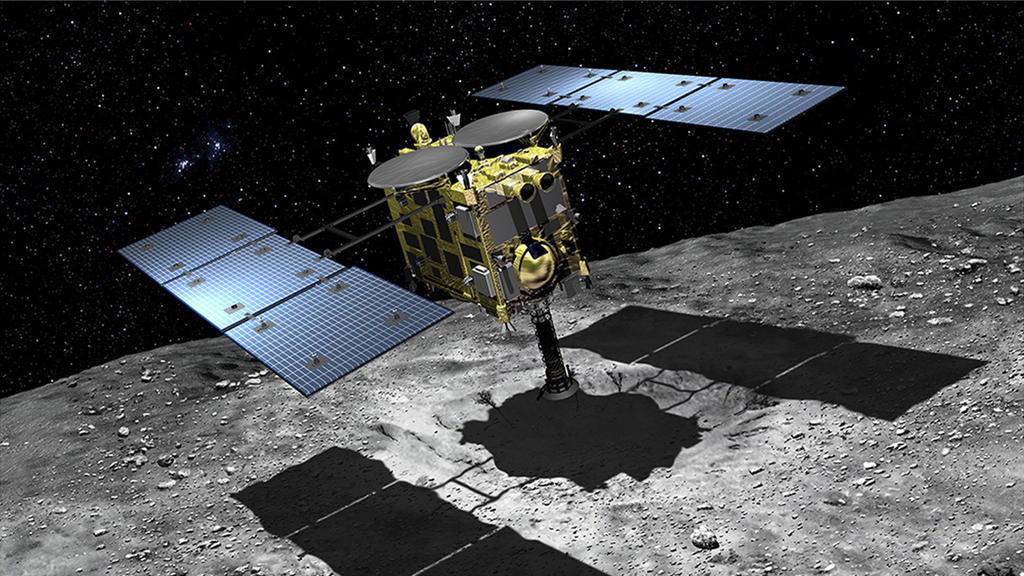 The first touchdown of the spacecraft itself was planned for end October, but it has been postponed until January 2019.

Because the surface of Ryugu is much rougher than expected!

The horn of Hayabusa2 extends about 1 m, therefore the touchdown area should not have rocks higher than 50 cm. The touchdown area must also have a diameter of at least 100 m because of navigational accuracy.

Such a location could not be found on Ryugu!. Below is the one finally chosen (red circle) free of rocks, but ONLY 20 m in diameter! 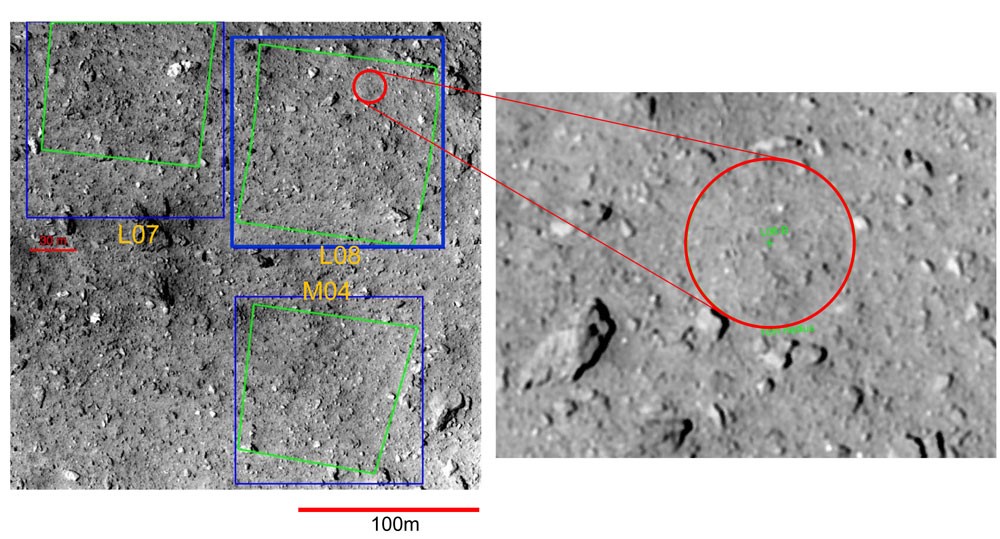 There is also some good news. The earlier launching of the rovers and the MASCOT showed that navigation (with laser range finders) could be done more accurately (within 10 m), at least until the altitude of 50 m above the surface.

In the next weeks, two rehearsals will be performed, going lower, to find out whether tis accuracy can be maintained until touchdown.

The first real touchdown is now planned for January next year. There is enough time because Hayabusa2 will stay at Ryugu until December 2019.

All this is happening at about 300 million km away from Earth. Amazing. Keep in mind that communication between Earth and the spacecraft takes about 15 minutes, one way!

The German Space Agency has published a very instructive YouTube video, illustrating what I have tried to explain in this blog. Not only about the MASCOT lander as the title suggests.  Worth viewing more than one time!

If more news becomes available I will write an update